I've been participating in Reddit's Secret Santa for several years now and I've made it a tradition to make my recipients a box. Sometimes they have a specific application, others it's just a box. One thing is always for sure, I will be late, and I will ship one day past the deadline.

In this case I had an offcut of CVG fir that I've wanted to use for boxes for a while now, so I used that and some curly maple to get some good contrast between the panels and the sides. 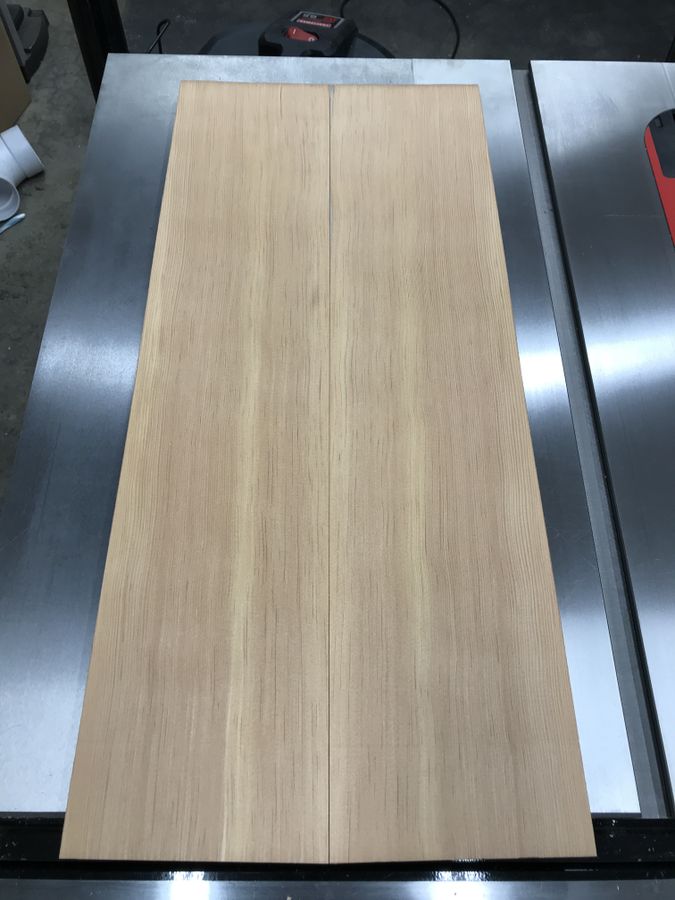 My starting stock was an 8/4 piece of CVG fir that was leftover from another project. Since I was shooting for ~1/2" on the sides for these boxes, I was able to get 3 pieces out of the offcut. This gave me enough for two boxes. I wasn't too concerned with grain wrap in this case since this material is fairly easy to get it looking ok in the corners. If I wanted the best possible wrap on the corners, I would have only got 1 box out of here using the resaw method. 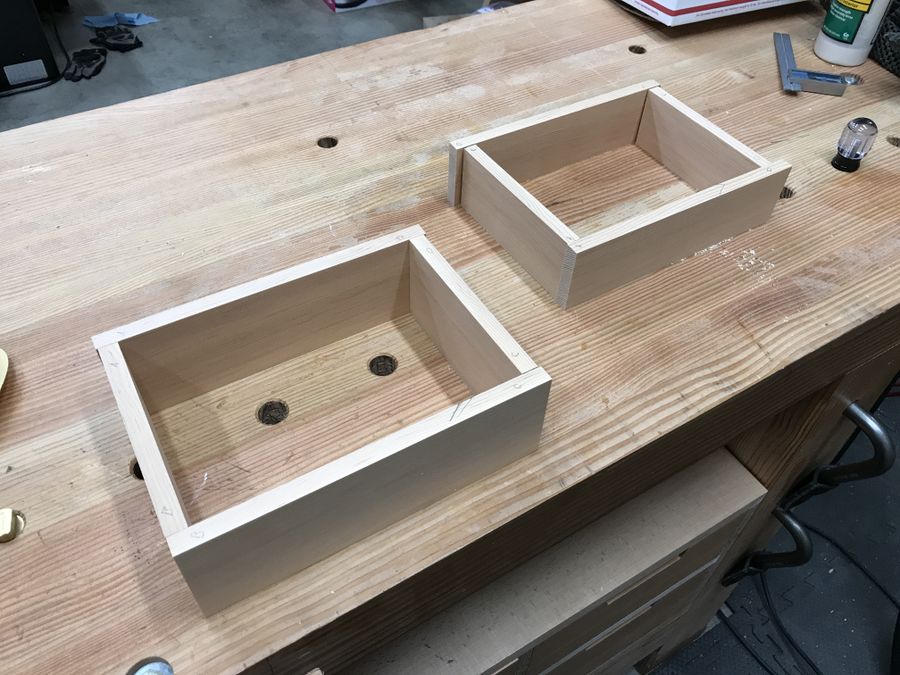 Rough layout for the sides. I had to fit one in a medium flat rate box, so I took the length and applied the golden ratio to get the other dimensions. I thankfully had plenty of space for packing material in the box. 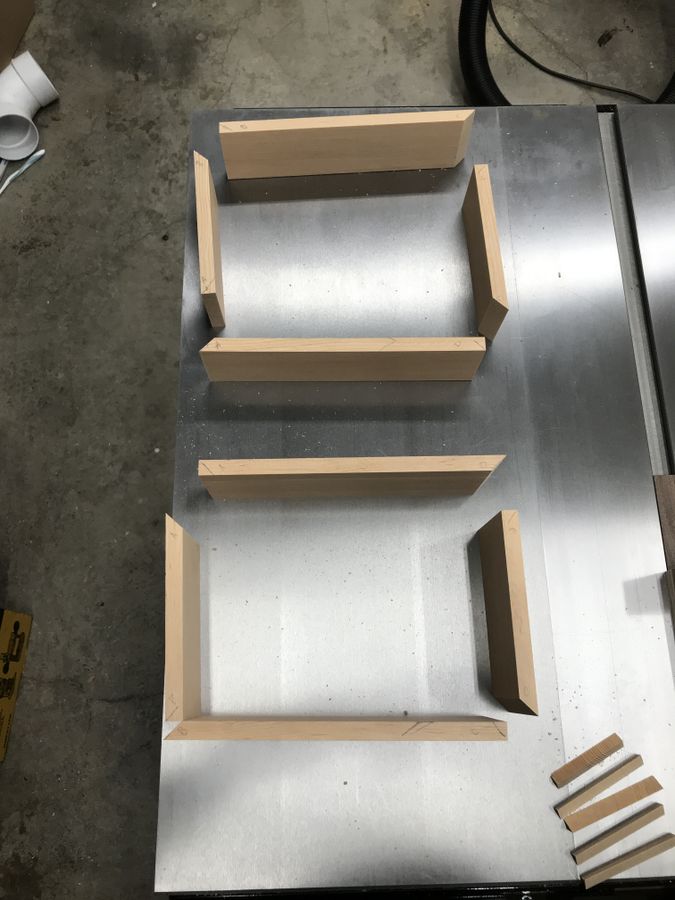 Cutting the miters for the corners. I go through and cut all of the left edges first, then come back and cut the sides to size with a stop block so I can streamline the process. This probably took me all of 10 minutes to complete. 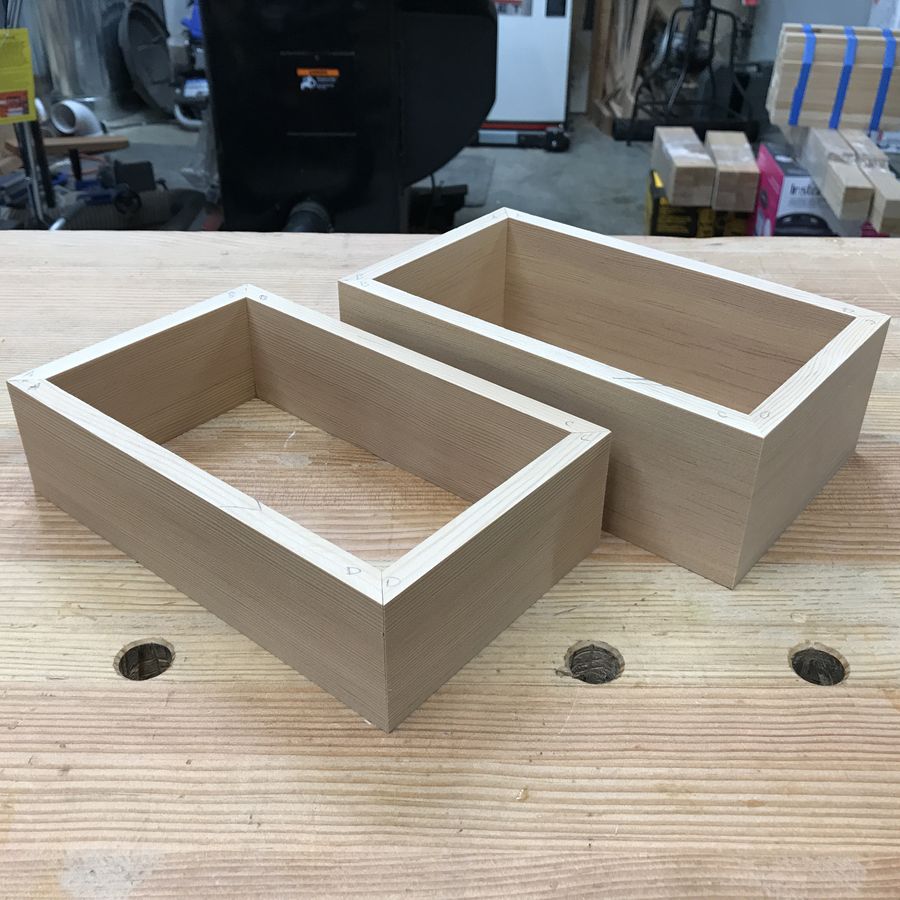 Dry fit once everything was cut. Just as I hoped the new miter sled helped me get clean and straight miters for all 4 corners. 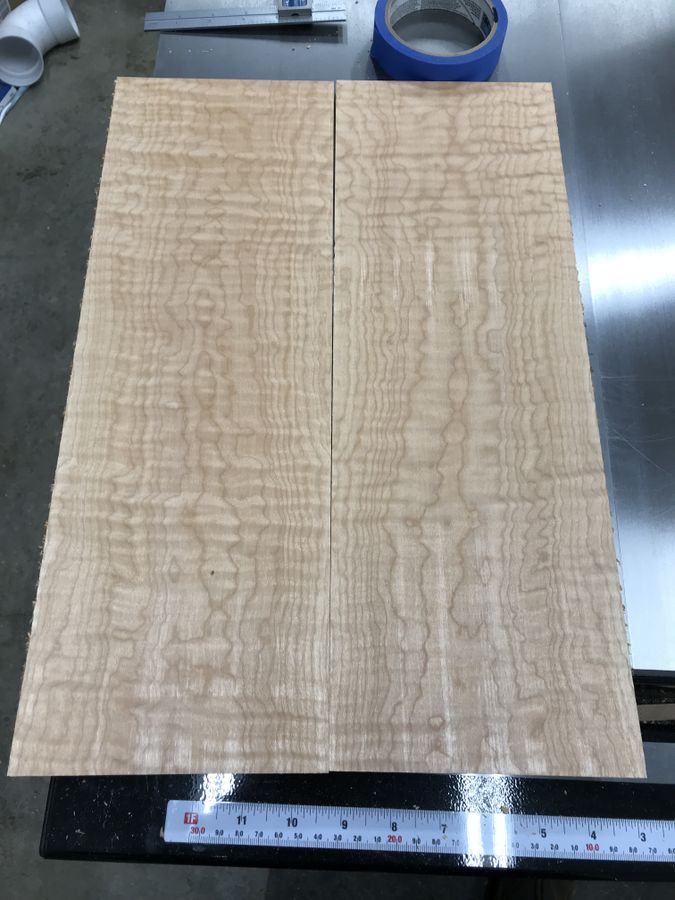 The top and bottom panels were cut from a piece of curly maple that is left over from the panel stock for my bedframe which is currently in production. I got really lucky with these and the grain is really nice! 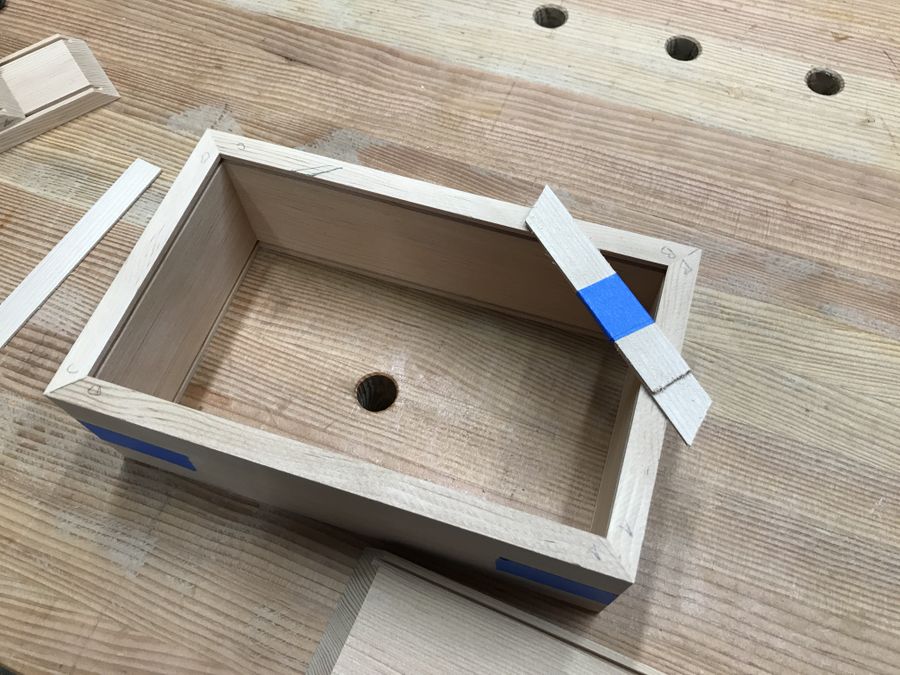 I haven't shown it, but I cut a groove for the panels on the table saw with my flat ground blade. I usually just measure the groove length by the inside of the groove in the miter, but I decided to use the bar gauge/stick method. I just cut two thin strips and then cut them to points. From there it's a matter of spreading them into the gap and taping it in place so you have an accurate way to measure the real distance across the box. 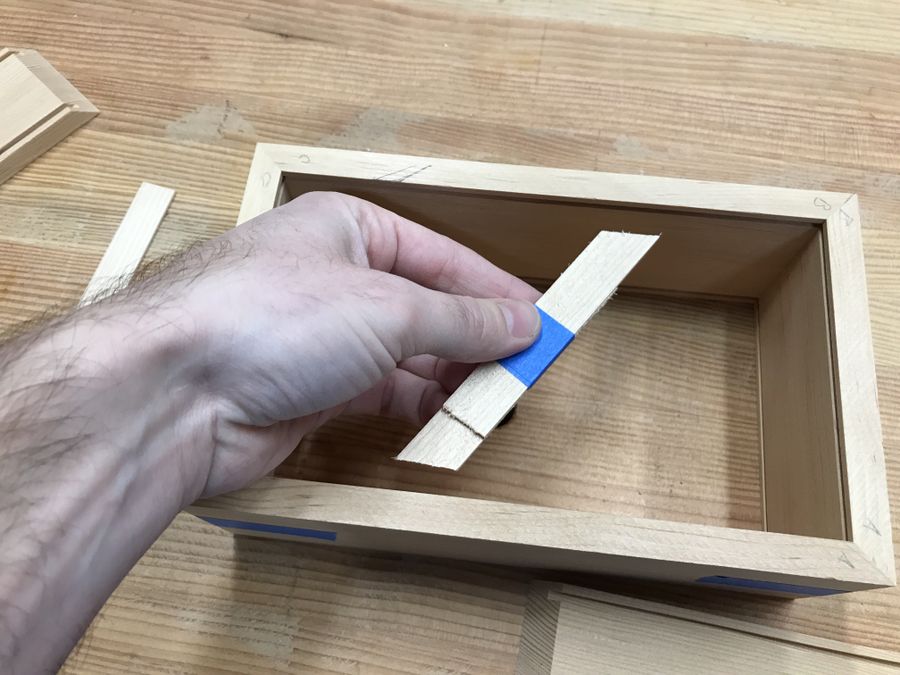 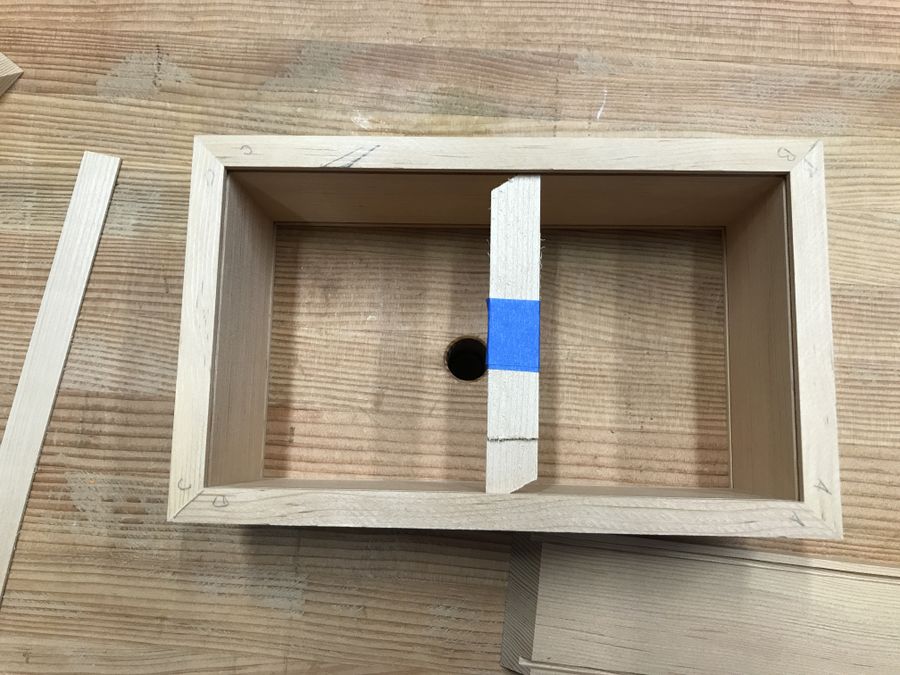 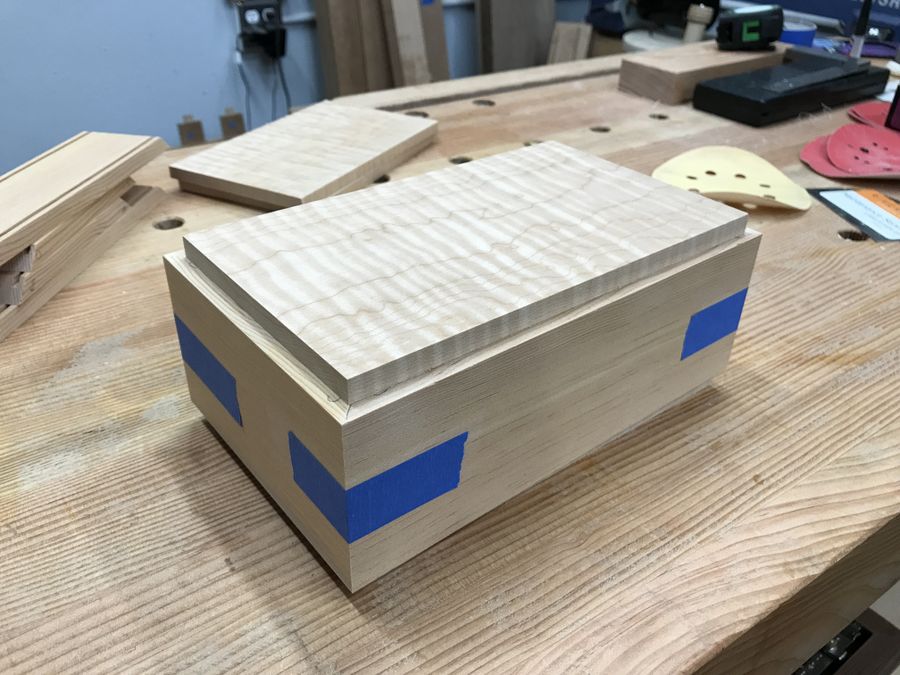 Using my measurements I made with the strips, I cut the top and bottom panels to final size. 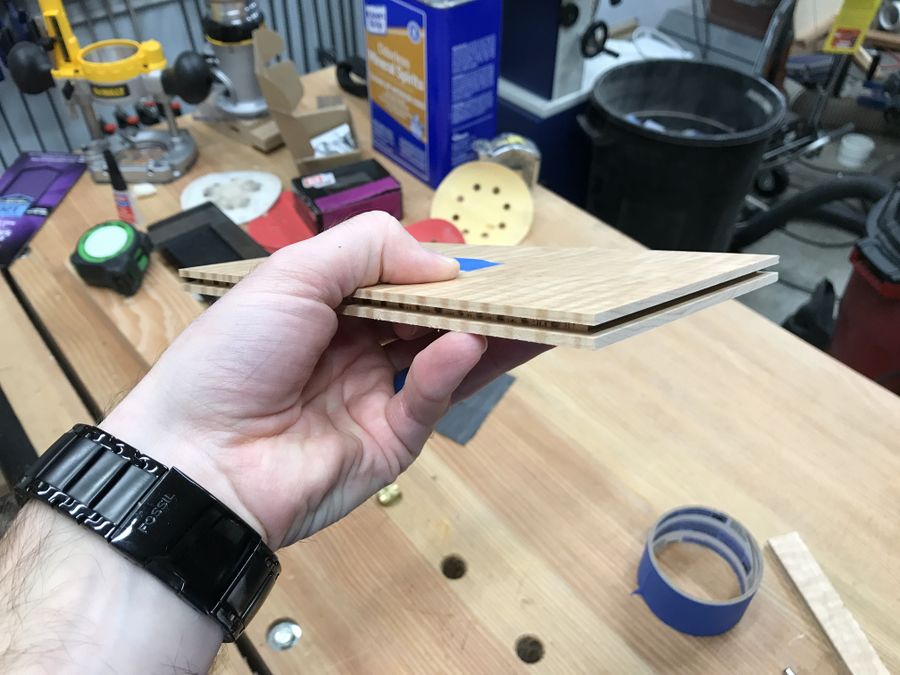 Since the top panel is solid stock, I need it to float in the groove for seasonal movement. I'm opting to follow a similar system that Chris Schwarz uses in the Anarchist's Tool Chest. I ripped a groove so the panel is evenly spaced in 1/8" increments. This way the panel will float, but won't be recessed from the top. 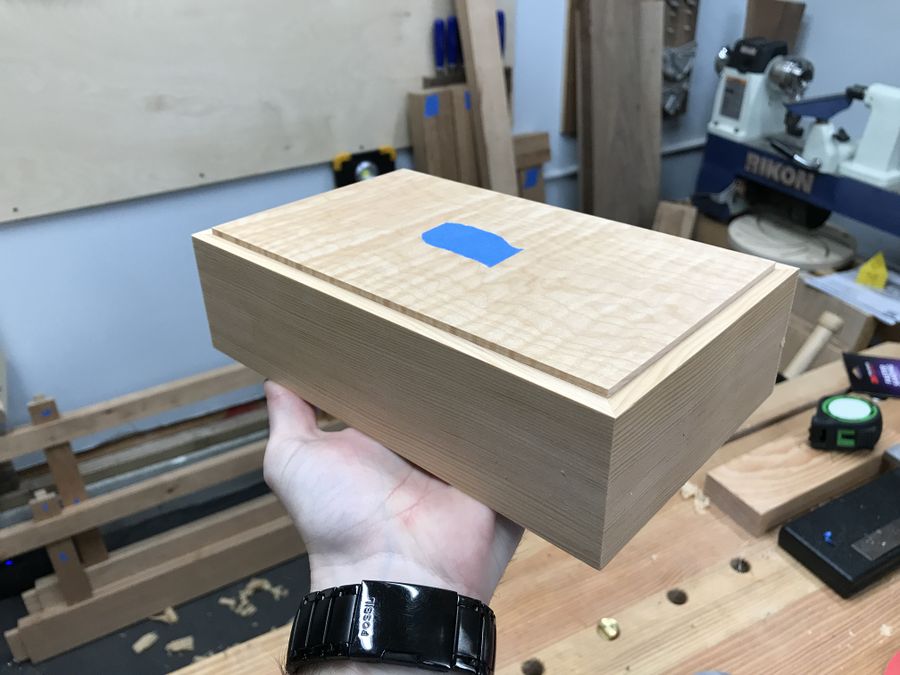 Lid fits well in the groove, but is a little tight. This leads to some unfortunate occurrences later. 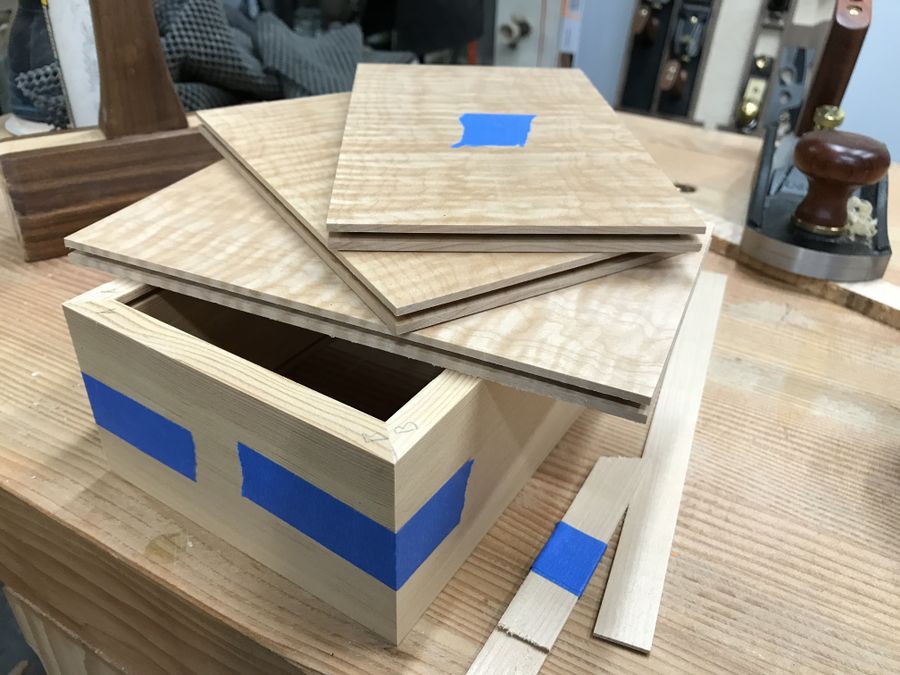 I'm actually making two boxes, so after I got one fitting well, I went and made the other three panels. 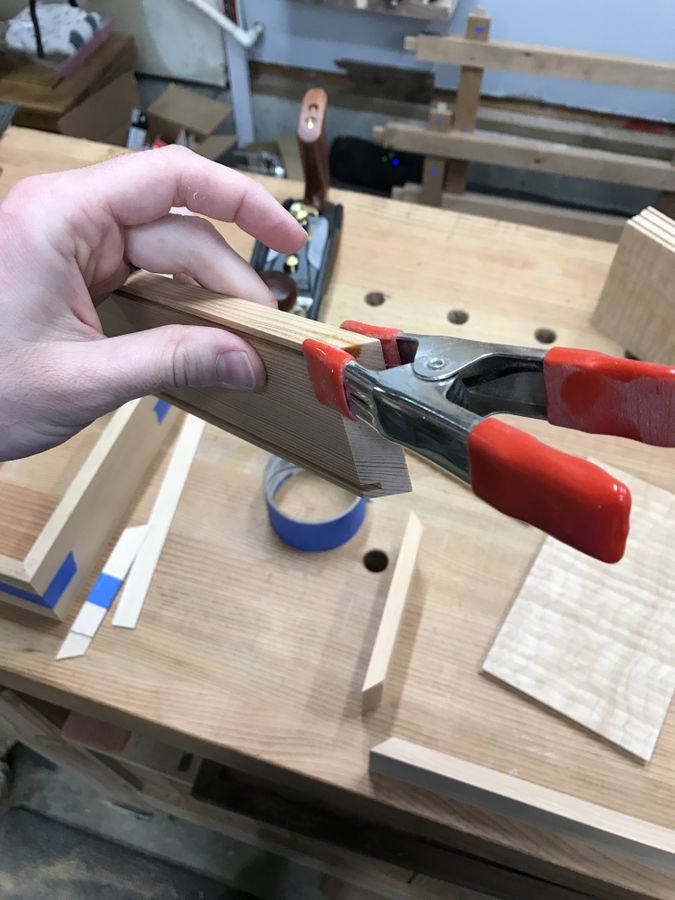 I mentioned the fit was rather tight. I cracked the tongue pulling the panel out on the last side piece. Quick thinking and some CA glue should fix this. 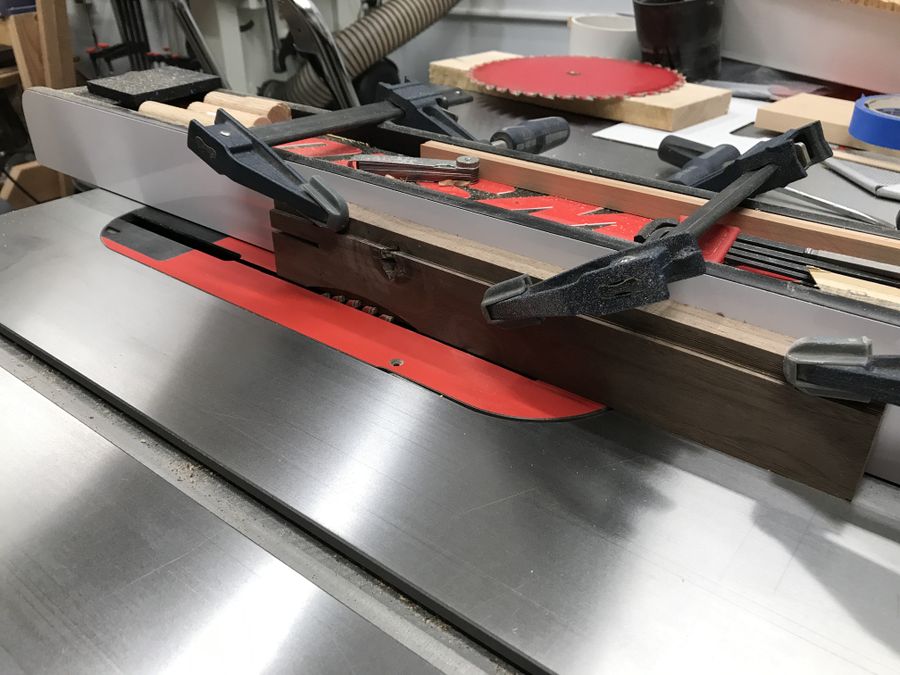 I cut the panels to exact size of the grooves, so I needed to give them a little breathing room. I rigged up a way to trim 1/32"ish off the panel that would nest into the groove. 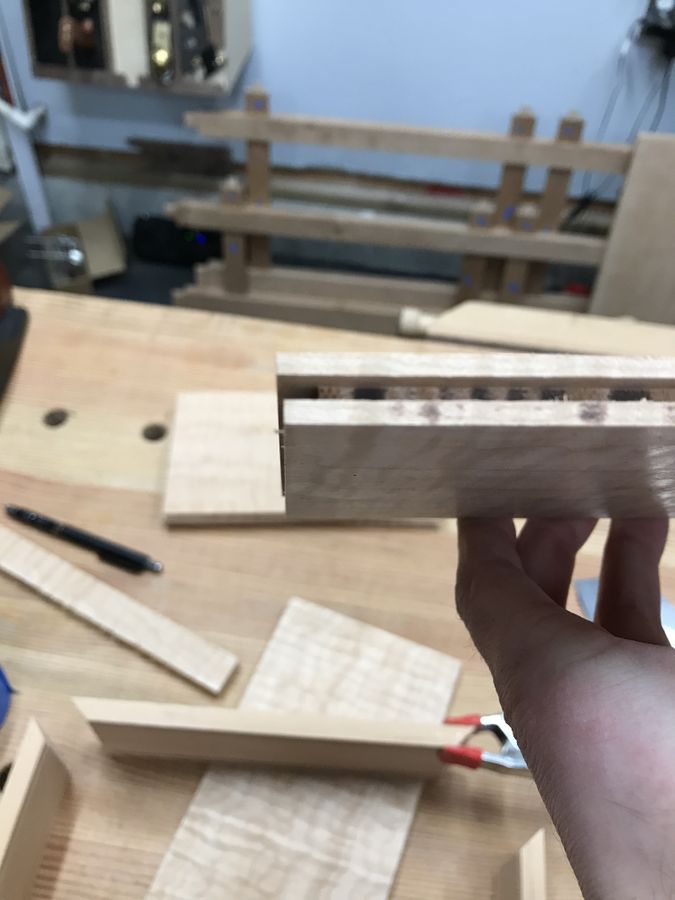 Here you can see the trimmed up internal tenon compared to the outward facing one. 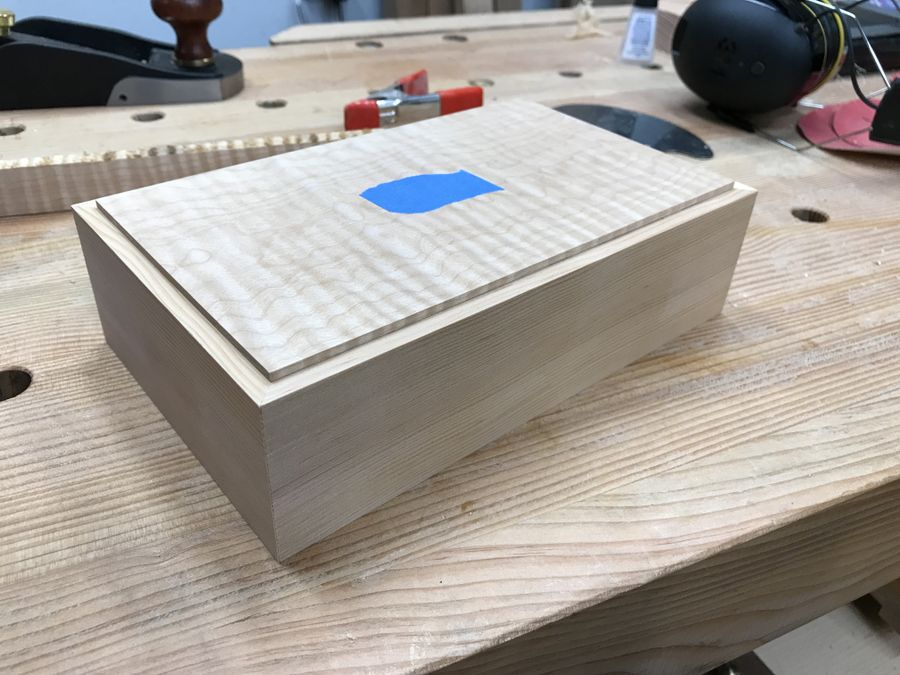 The fit is much better. I can actually close all the joints this time. 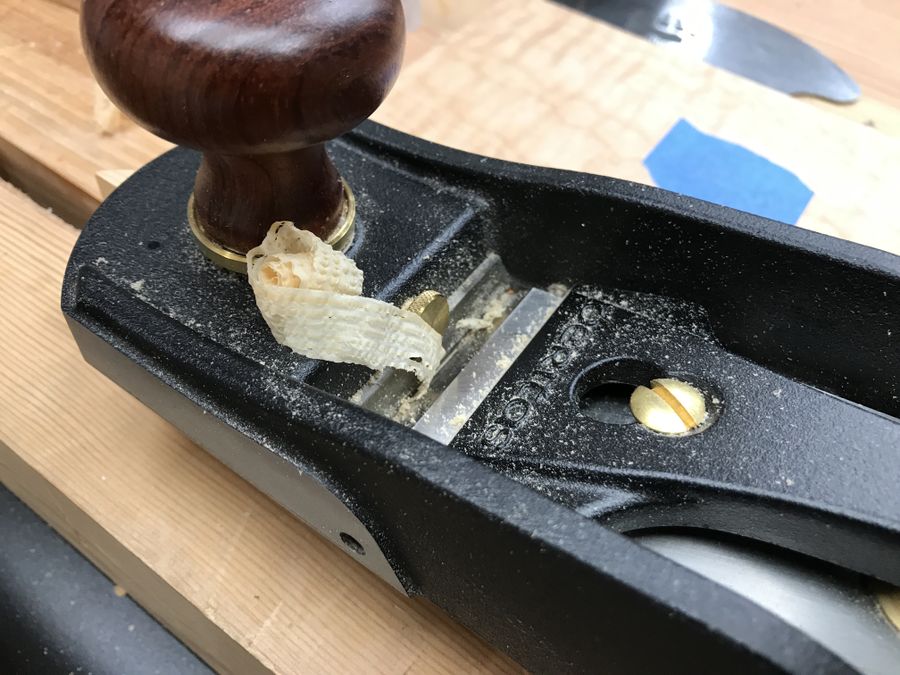 To help alleviate the tightness of the joint, I took a few passes with my smoother to make the joint easier to assemble. It can still hold itself together without clamps, but it no longer requires me to get red in the face to pull it apart. 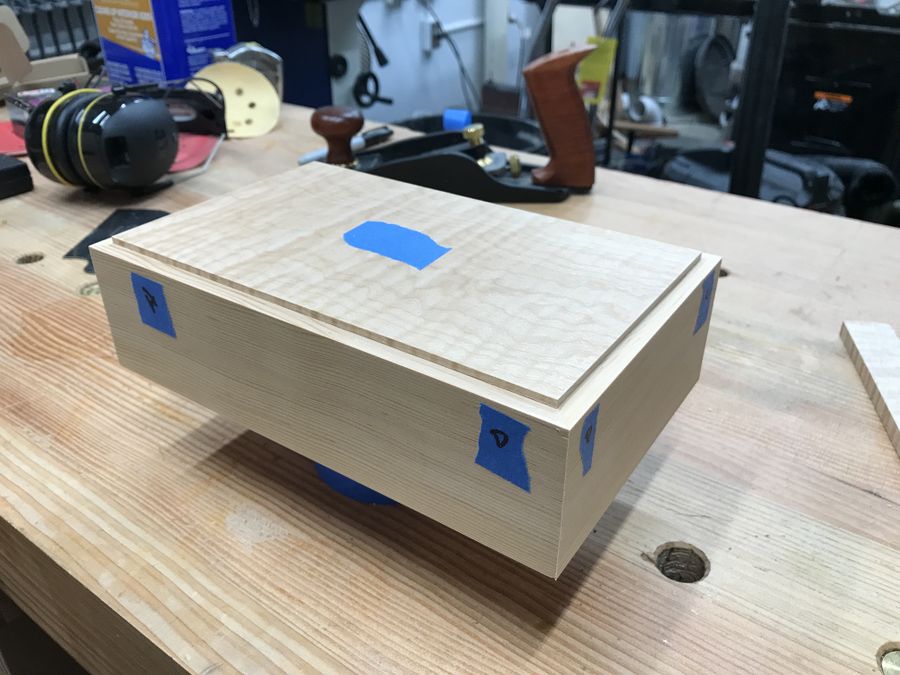 Box is now glued up here. I had to relabel the corners when doing the final glueup since I planed off my original pencil marks on the top of the sides. 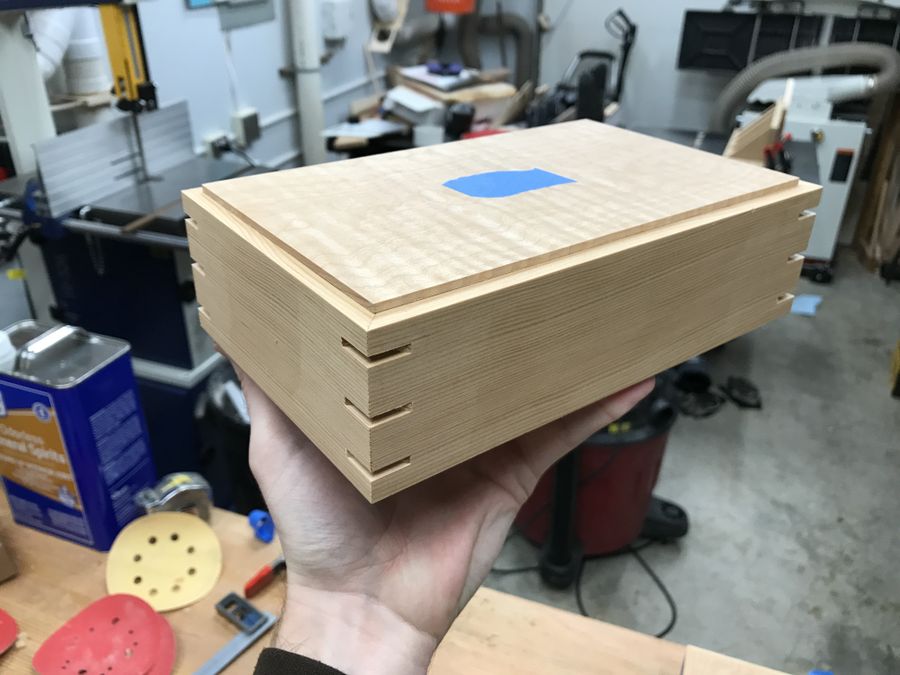 I don't trust raw miters even on quarter sawn material, so splines were in order for this one. 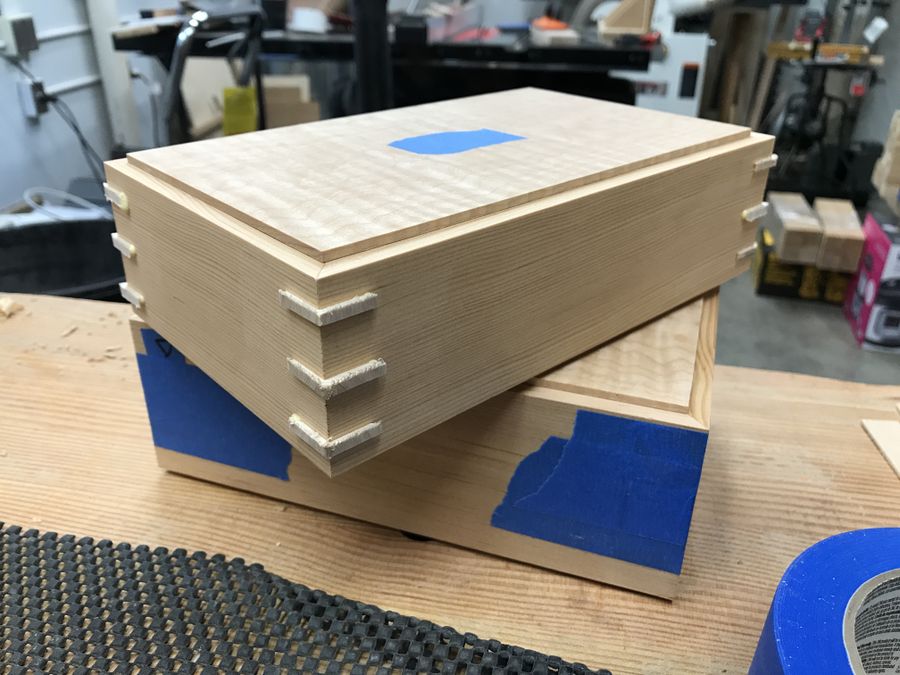 Maple to match the top, even though I've had nothing but bad luck on maple splines in the past. 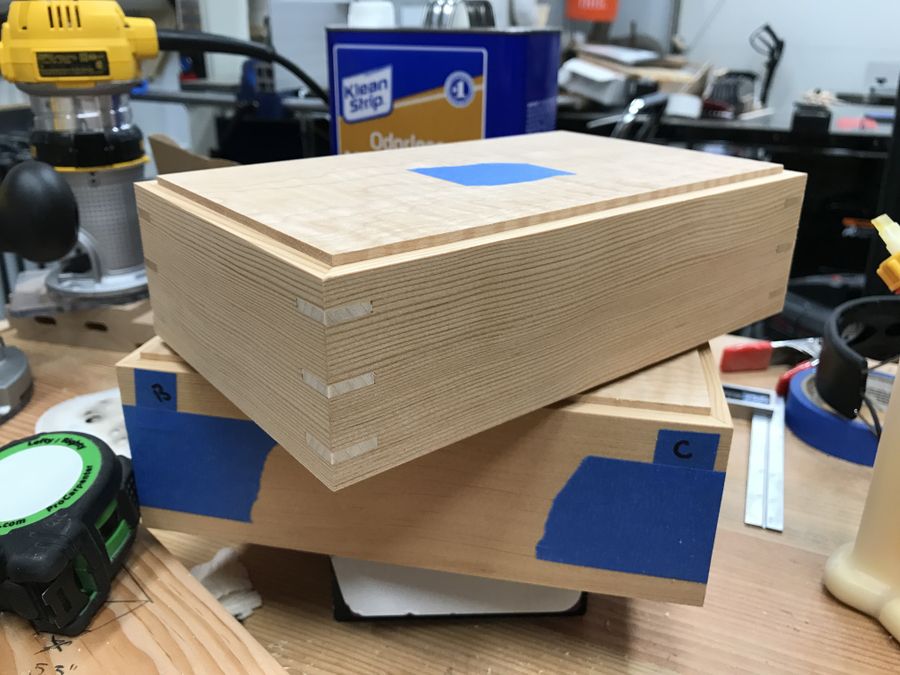 They cleaned up okay, but I had one chip out when I was sawing the waste clean. Sigh. 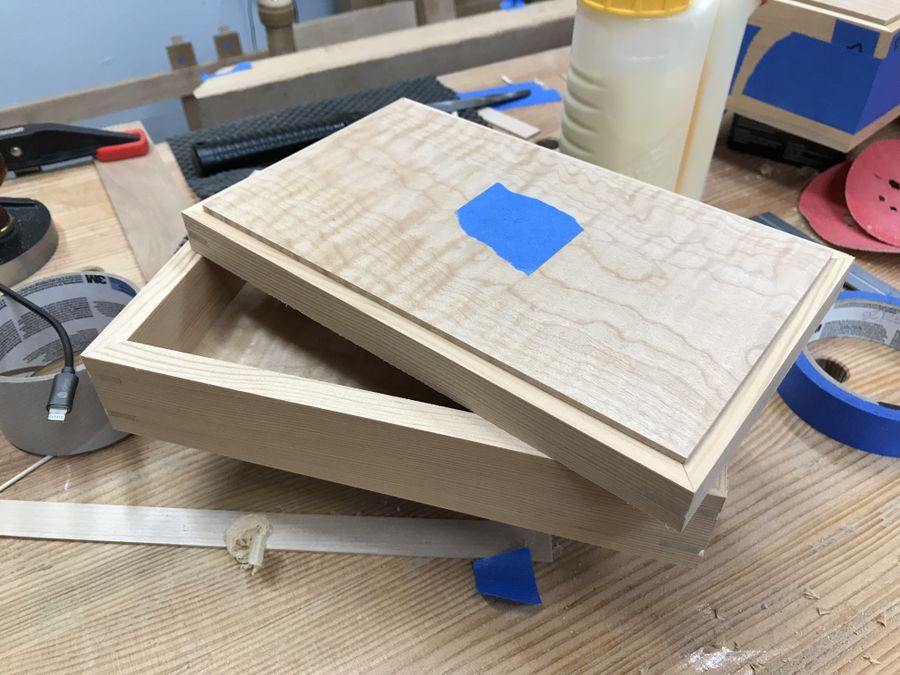 With the box holding together, it was time to bandsaw it apart. I never like this step as it's fairly destructive, but I made it through mostly okay. I cleanup up most of the saw marks with my smoother and did a final cleanup on a sheet of sandpaper on the table saw wing. 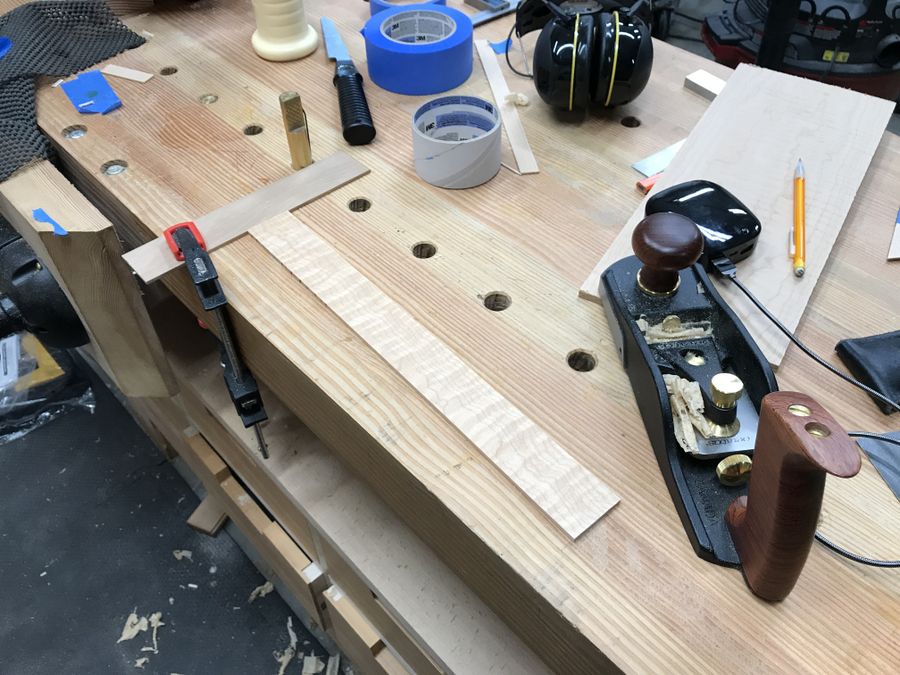 I used more curly maple for the box liner material. I used a piece of MDF on the planer bed to get it thinner than 1/4", but I don't want to make a habit of it because it was.....sketchy. I cleaned up each piece with the smoother before cutting the miters. 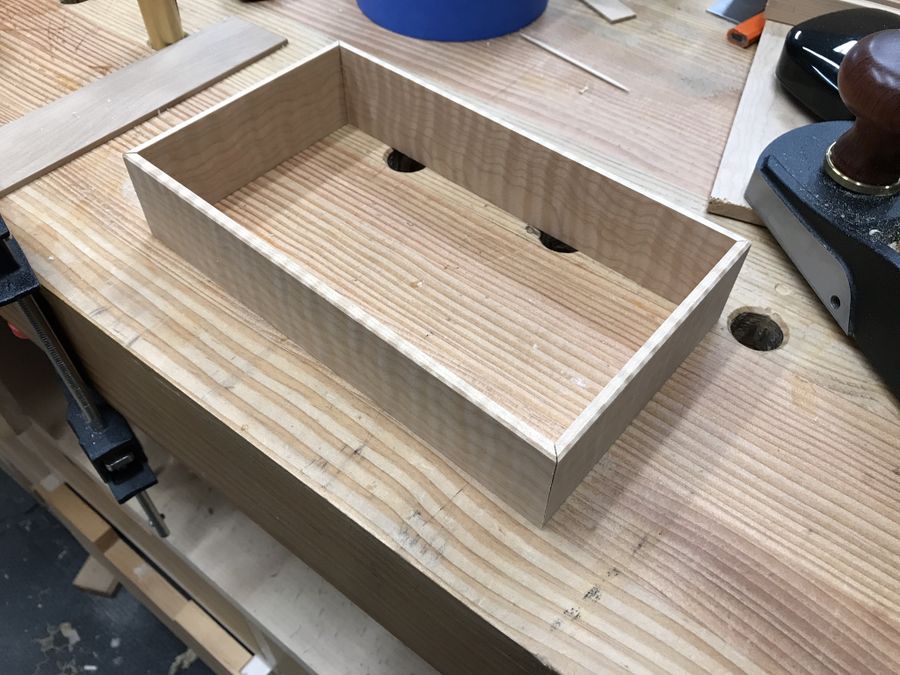 Cutting these was hard without a shooting plane to help me sneak up on the fit inside the box, but I was able to get it right. Key was taking it slow, even if it took me 5-10 cuts to get the fit right. I also put a chamfer on the outside edge when the lid will mate with it. 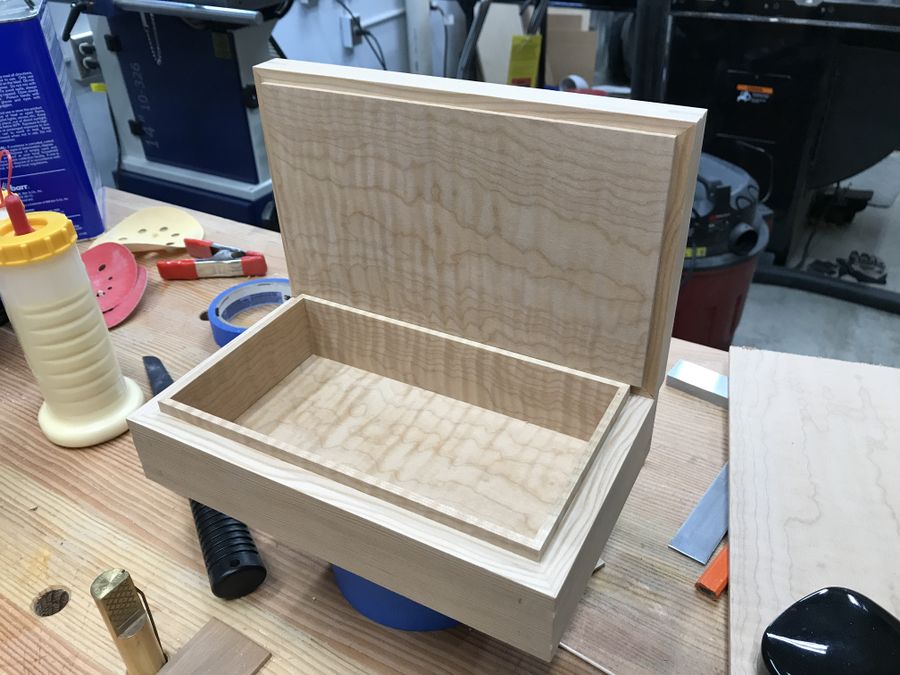 It really helps dress up the inside of the box by hiding the external material. 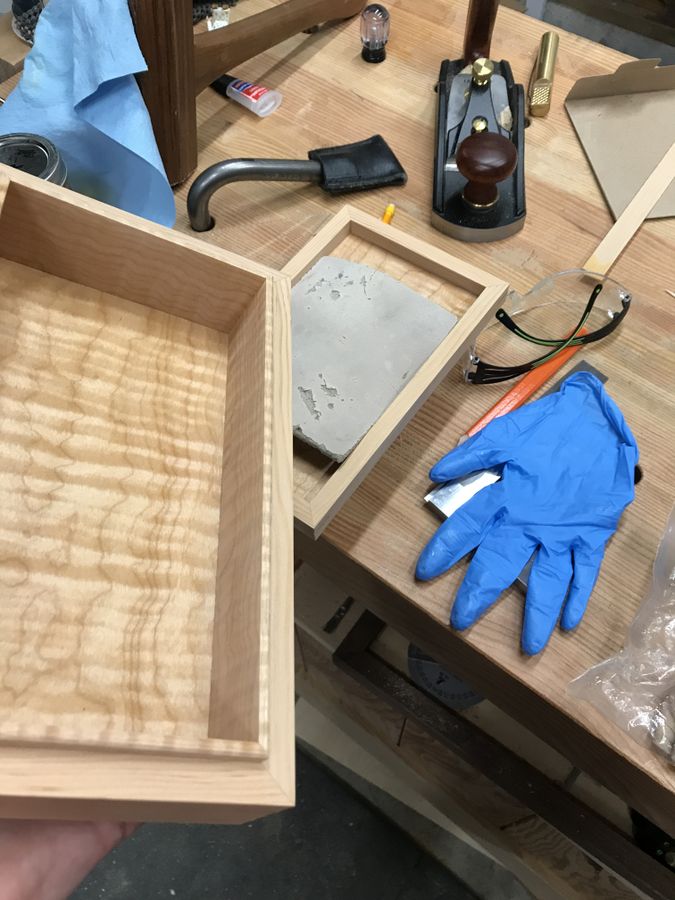 Quick in progress shot from the finishing. 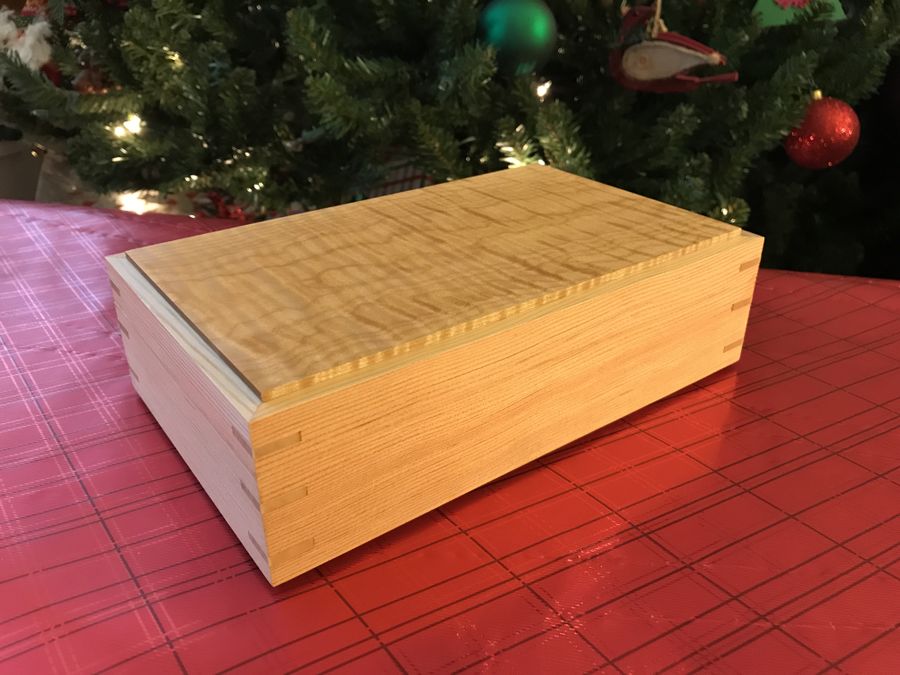 I really like how it came out, aside from the few mistakes I can't help but overlook. I had to come in and shave two internal corners back to keep the lid from fitting way too tight due to the box being slightly out of square, but it wasn't anything that someone would notice. 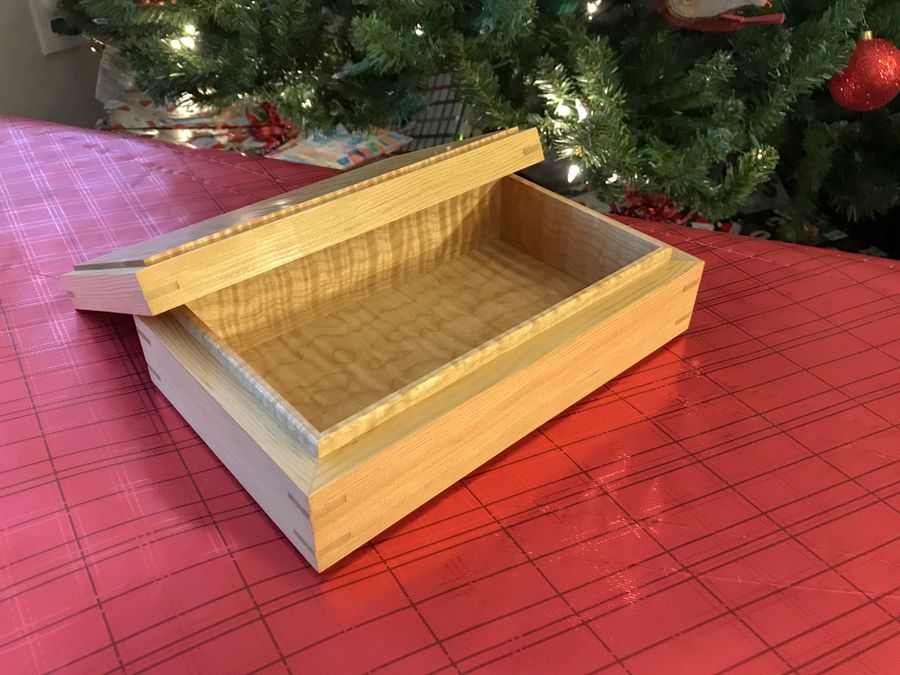 I forget how great boxes are to build. They're small and go quickly compared to big furniture, and they don't let you get away with much of anything. Joinery has to be tight with the piece so small. I think I'll start making these more often and not just at Christmas. :) 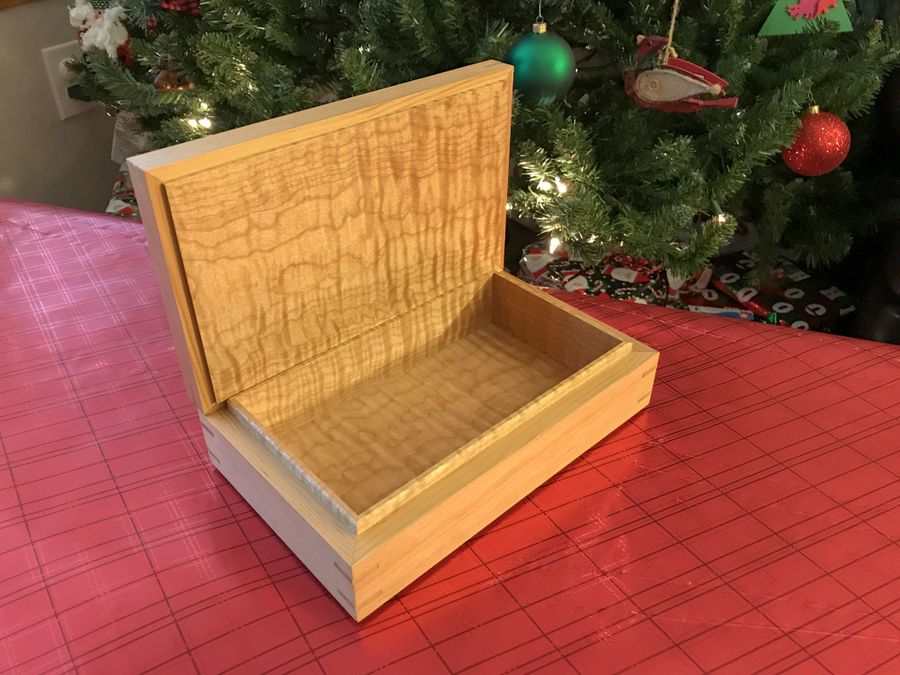 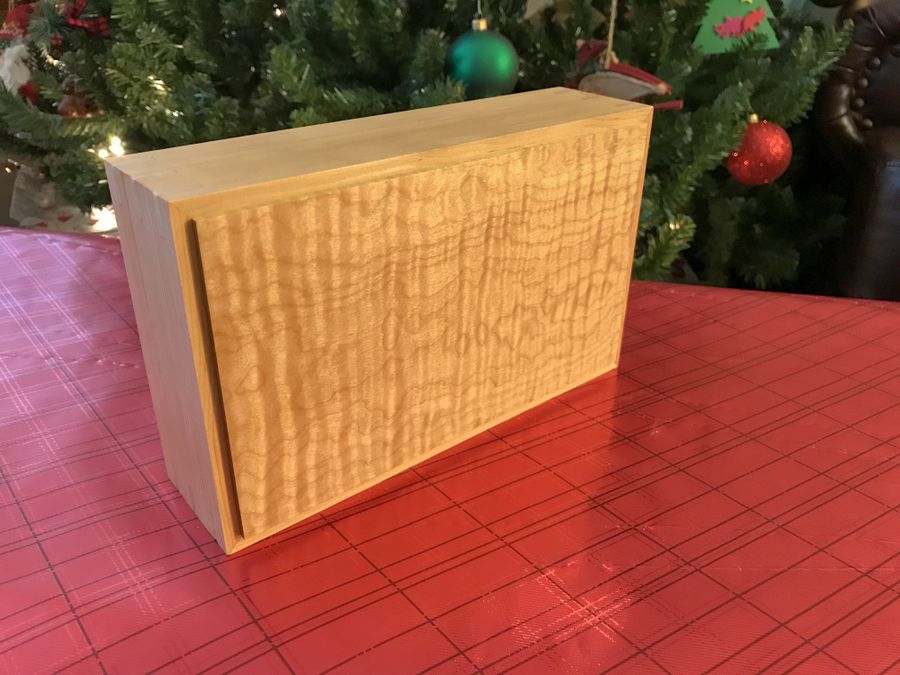 Man, that Maple is CURLEY. So beautiful.

I love box making for the very reason that it helps to improve so many aspects of joinery. You can practice new techniques and work with woods you may not use a lot in traditional furniture.

Good work on this one, I hope you do make more in the future.

Very nice and precise work. Hard to hide mistakes in boxes (except maybe on the bottom).

Would have looked great if you lined some more curly maple on the flat edge around the lip of the liner.

The inside of the lid looks just like the bottom, a mirror of the top panel. I haven't tried any inlay (when this box was completed, I've since tried once), but it would nice with something around that lip but not the full width to disrupt the grain on the exterior.

Very nice and precise work. Hard to hide mistakes in boxes (except maybe on the bottom).

Would have looked great if you lined some more curly maple on the flat edge around the lip of the liner.