My wife has been asking for quite sometime for me to build something to hold our tv and various electronics so that we can free up the fireplace mantle for other decor.  I finally gave in and designed this.

I started in Sketchup (taught myself for this project).  I worked up a basic design that I liked (and the wife approved), before going on to search out materials.  It took a while, but I tracked down some rough-sawn Jatoba from @goodwoodsawmill in Mississippi back in March.  They gave me a good price on the lumber, which brought the total cost on this project down to a reasonable amount.

The legs were turned by me, and were my first time trying to make anything match on a lathe.  The doors were cut first with a shaper origin (although, that was overkill, it was convenient), and then carved by hand to get the 3-dimensional braiding effect.  The design was inspired by the 3-strand braid group's braid relation, although, I sacrificed an accurate representation of that relation for the sake of symmetry (I'm a mathematician by day).  The drawer fronts are constructed from a single board for grain match, and inlaid with blue paua shell veneer (abalone).

Anyway, this is my first time submitting a project on here (was encouraged to do so by @cleancutwoodworking). 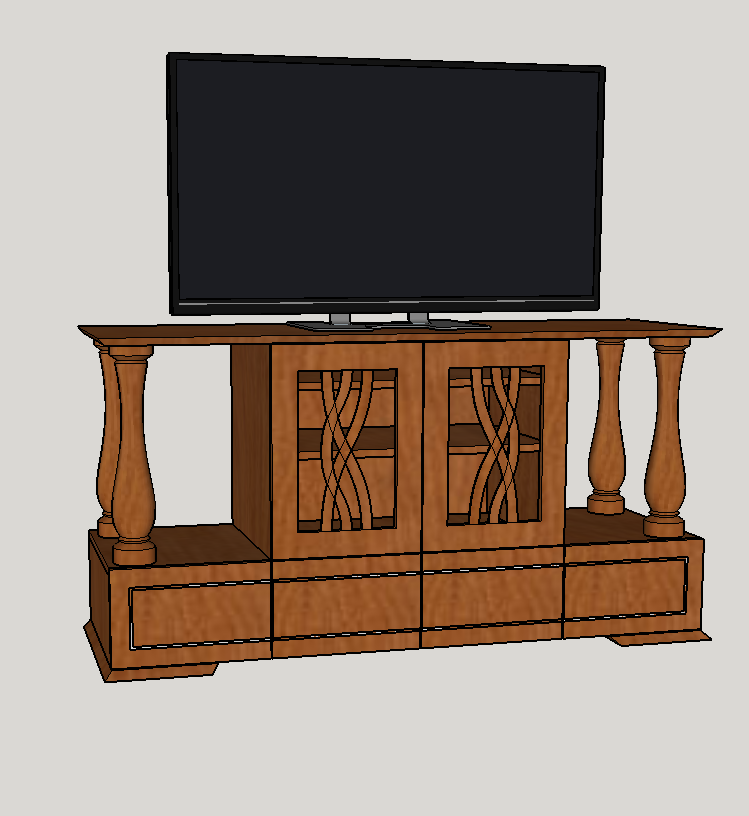 This is the original sketchup design.  You may notice a few deviations from this plan in what follows.

The legs were laminated up and turned first. 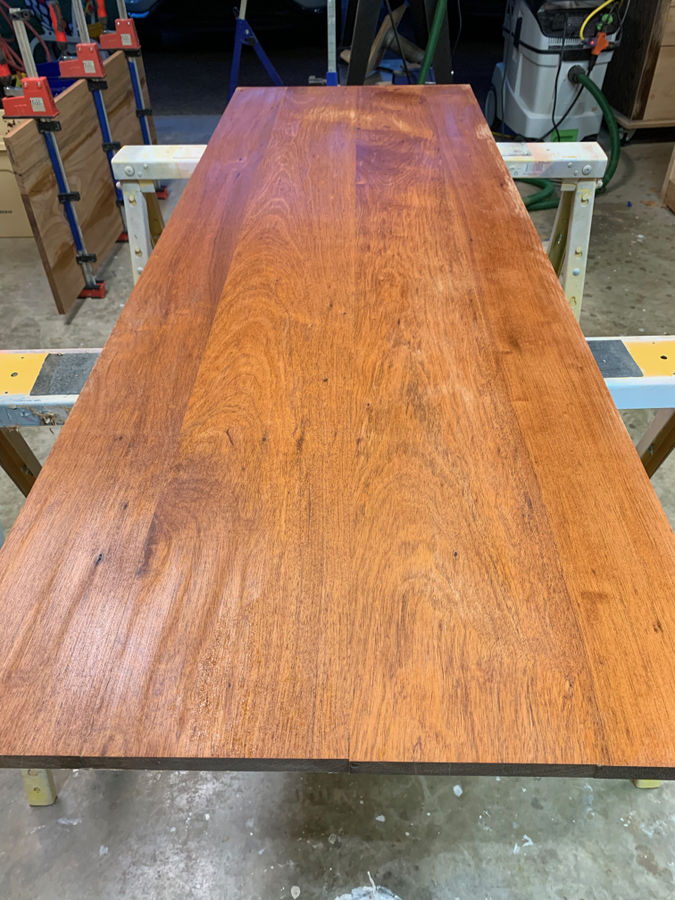 There were a bunch of panels to glue up.  This took a long time to go from rough stock to glued-up panels. 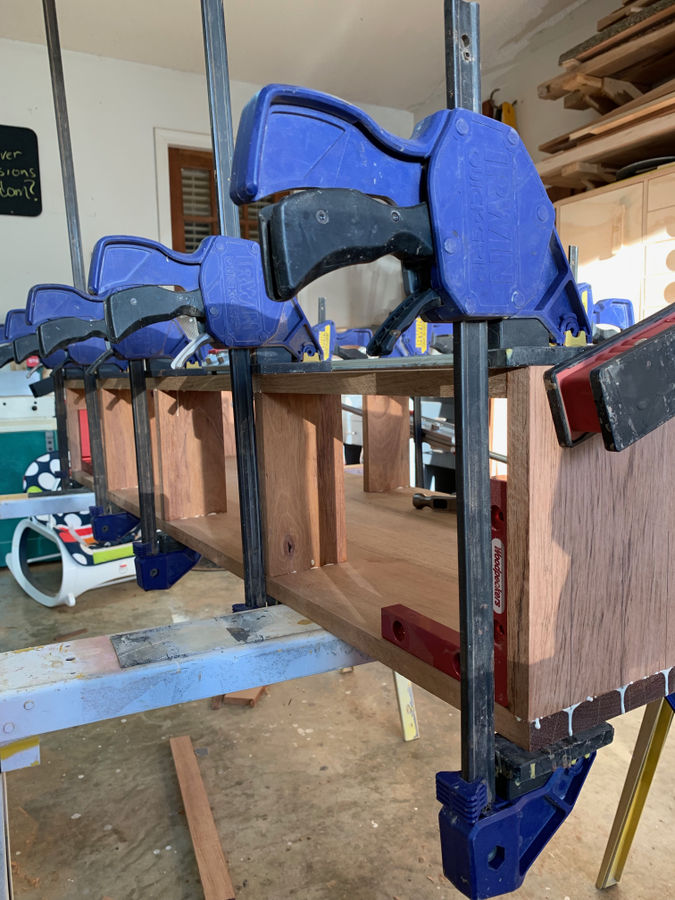 This was quite a tense glue up.  There were 11 pieces in all, plus countless dominos to deal with here.  It turned out ok in the end though.

The legs are fitted to the base drawer-box and the top with small tenons. 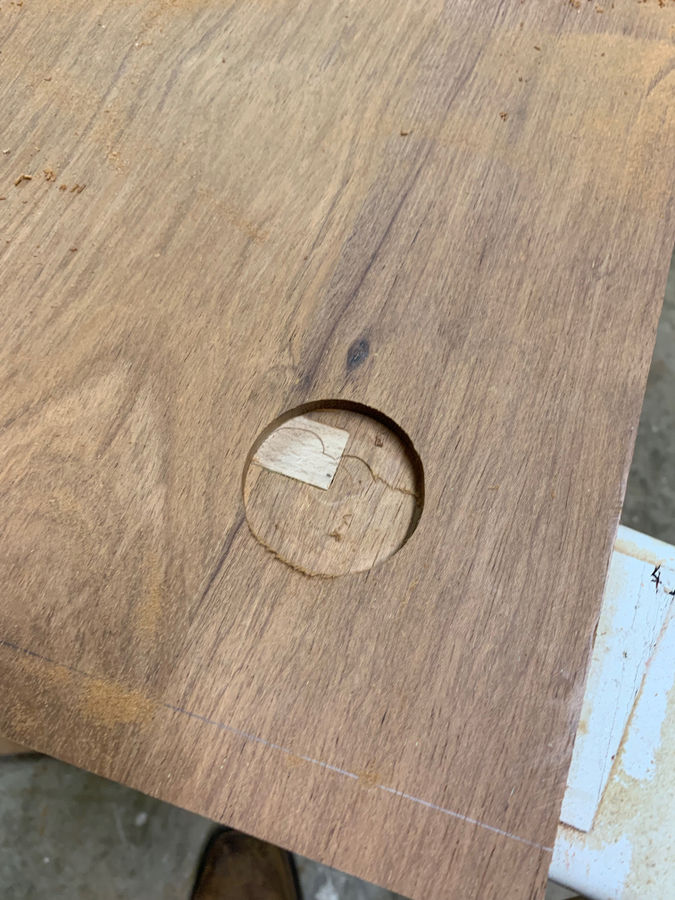 Here you can see I found one of the dominos I used to ensure alignment in the top. 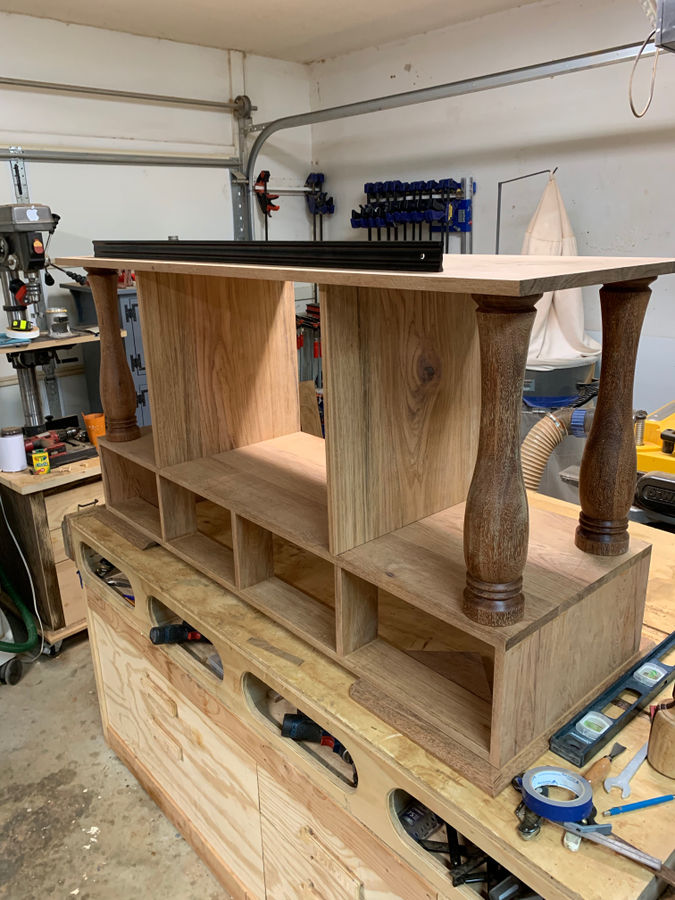 This was a dry assembly just to check that the side panels and the turned legs were all at the right height, and that the table top would sit flat.  I don't know how well you can see the straight edge here, but yeah, it's flat. 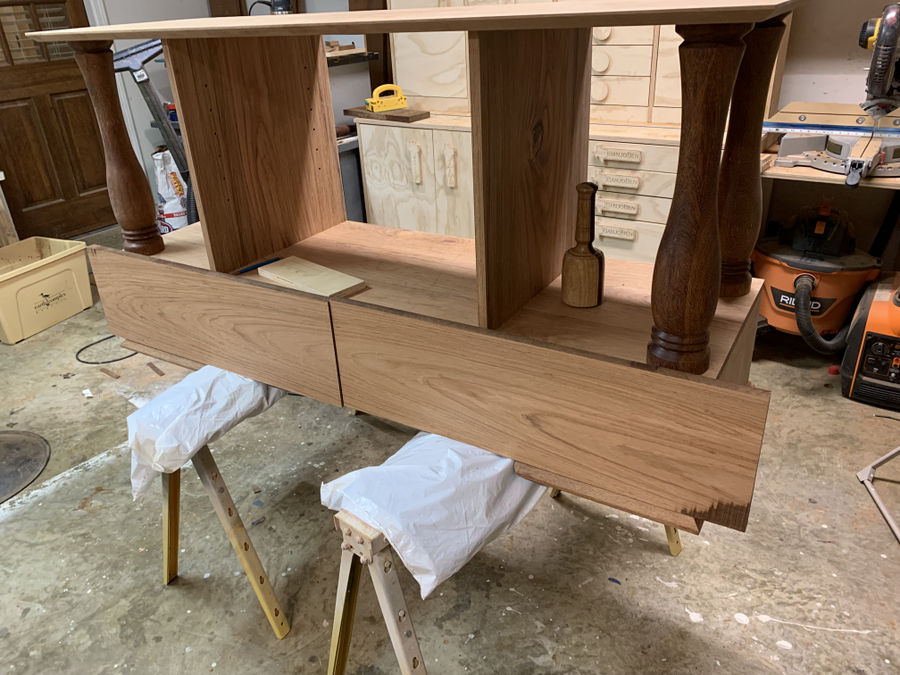 Here is the board I used for the drawer fronts.  This started as one board, but was badly twisted in the middle, so I had to cut it in half prior to milling it flat.  The down-side, is that I ended up milling different amounts front each of the two halves.  This hurt my grain match right in the center, but not enough to be noticeable in the finished product (except to me). 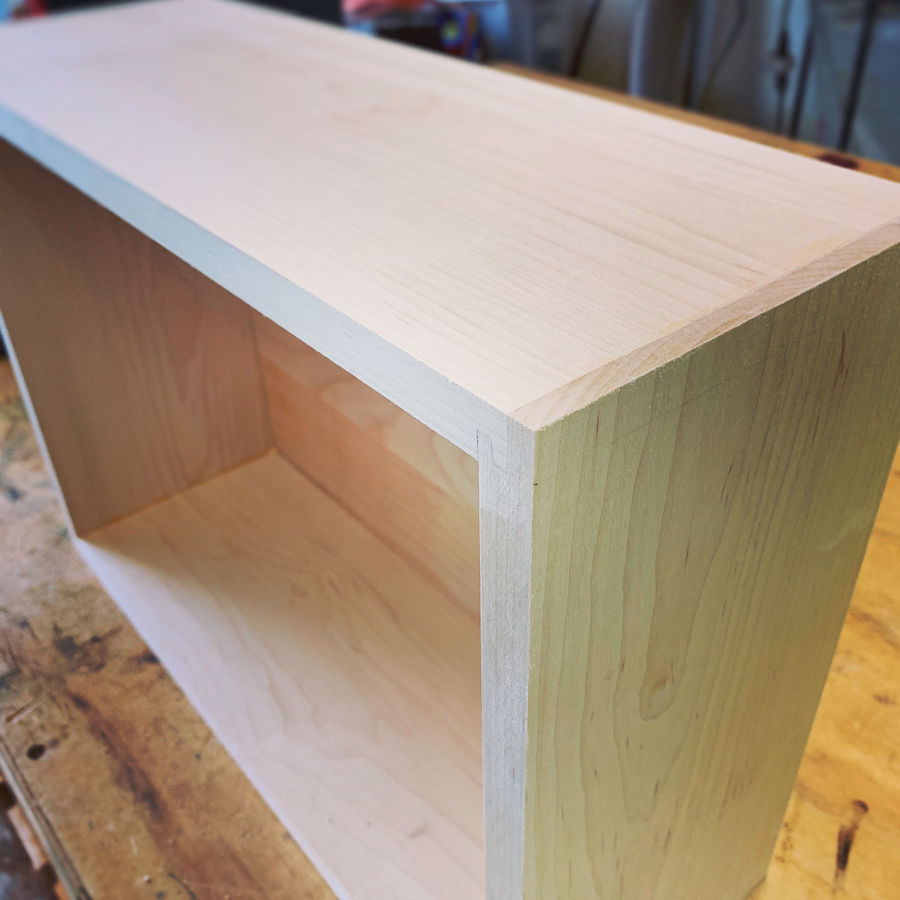 The drawer boxes are done with an MLCS drawer lock bit, and the bottoms are set into a groove. 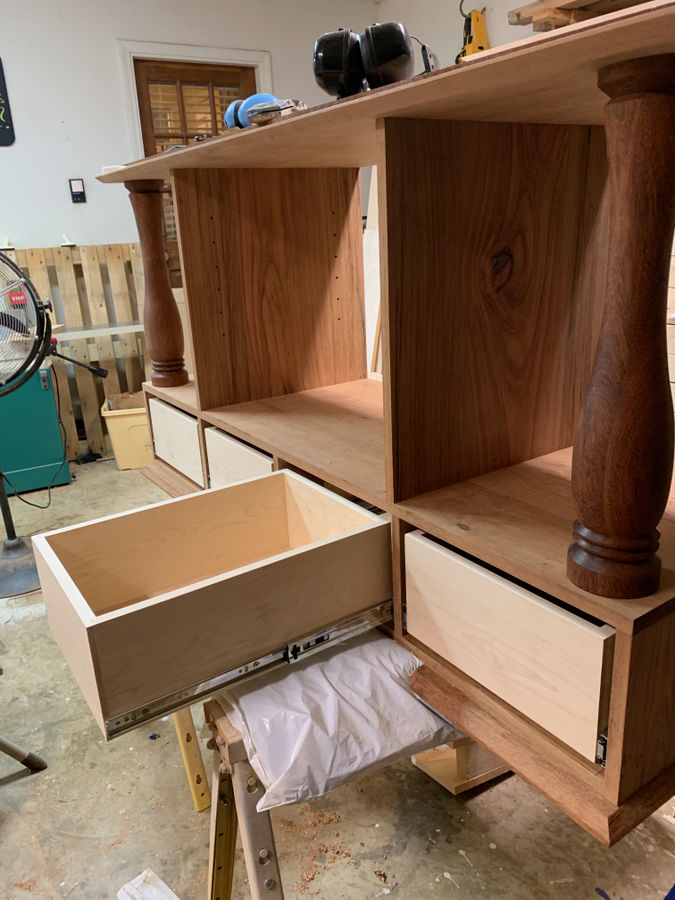 I used some inexpensive ball bearing slides to mount the drawer boxes. 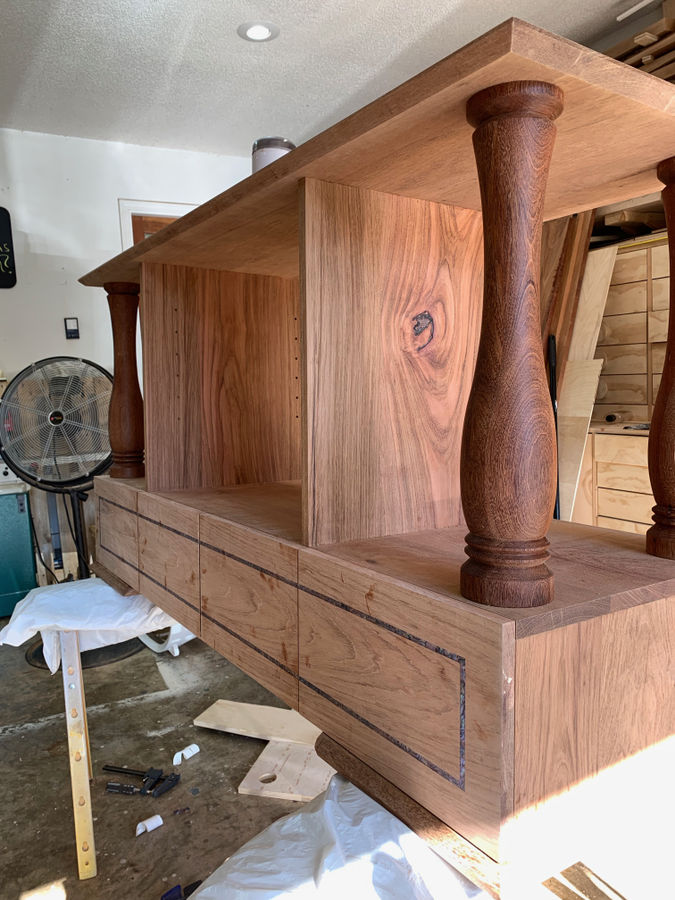 Here is the first fitting of the drawer slides 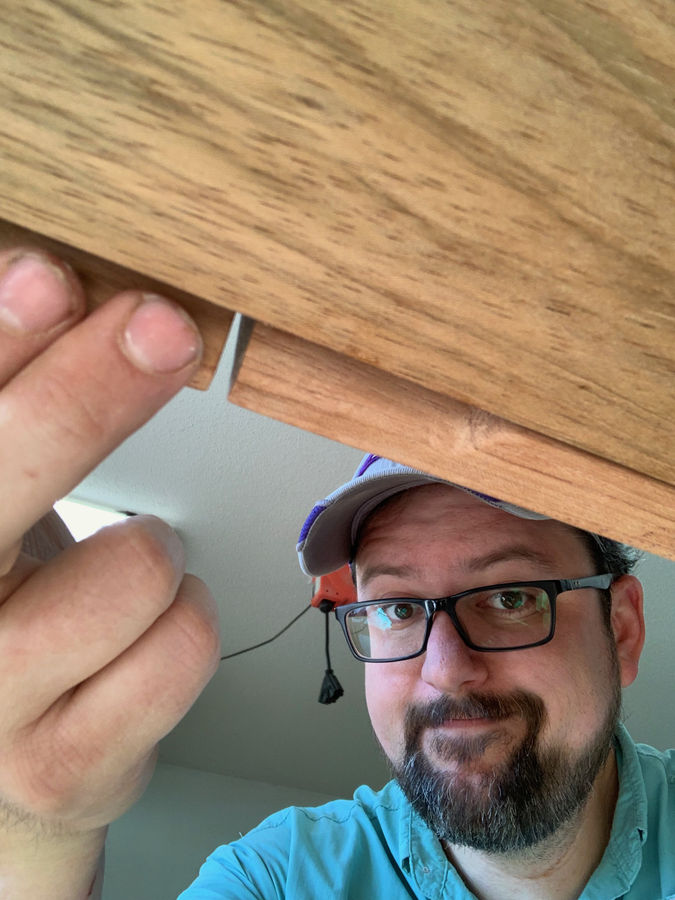 Since I went without hardware on the drawer fronts, I hand-carved (with a rasp) some small finger grips underneath. 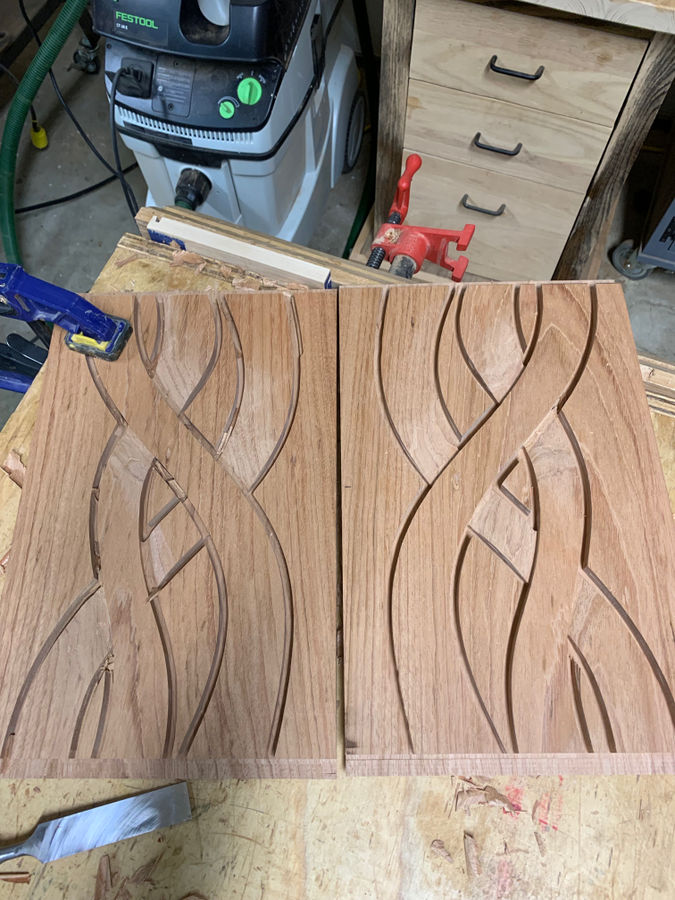 Just starting the carving of the door panels here. I started with the shaper origin to cut the outer shape (though not all the way through), and establish the depth of cut at each "crossing."  I then carved by hand to that depth, cut out with a scroll saw and them trimmed everything up by hand. 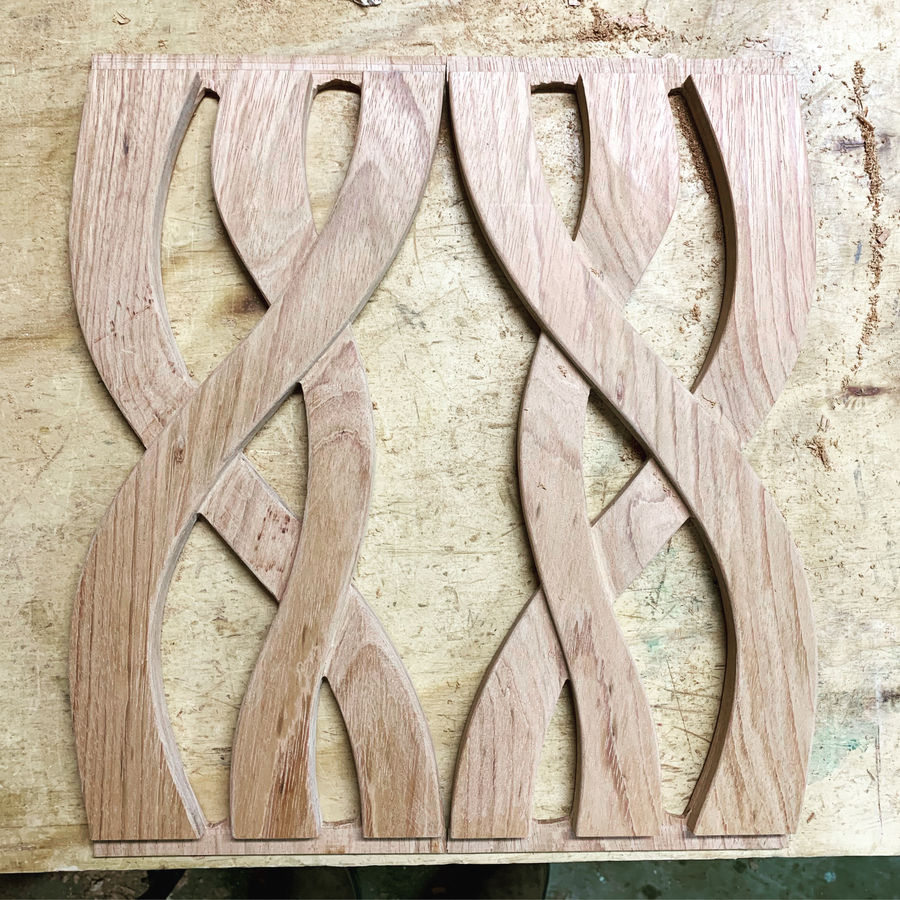 Here is the door panel after cutting it out. 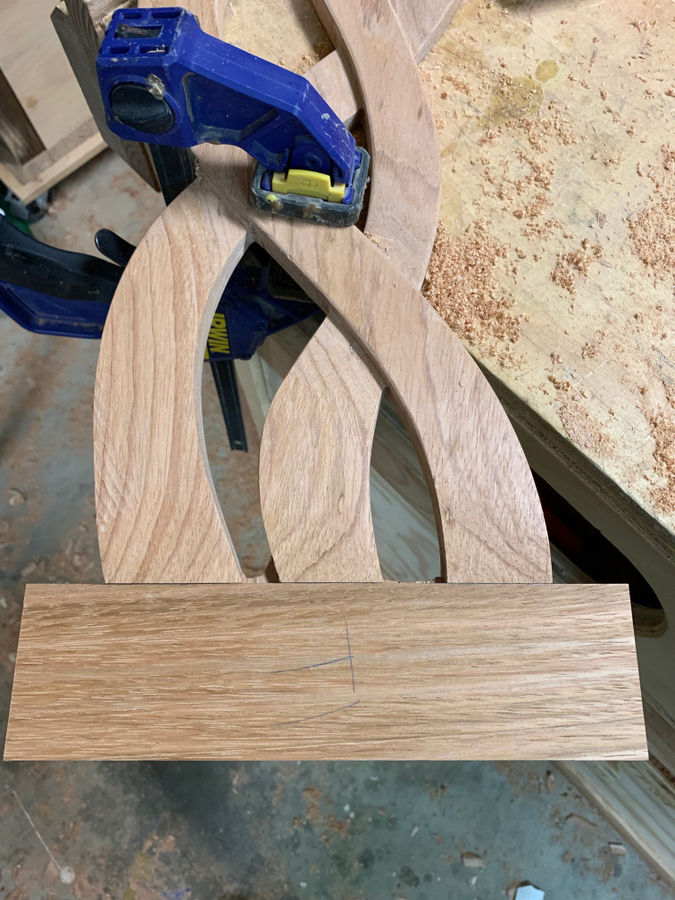 Here I'm trimming the braid to align with the door rail. 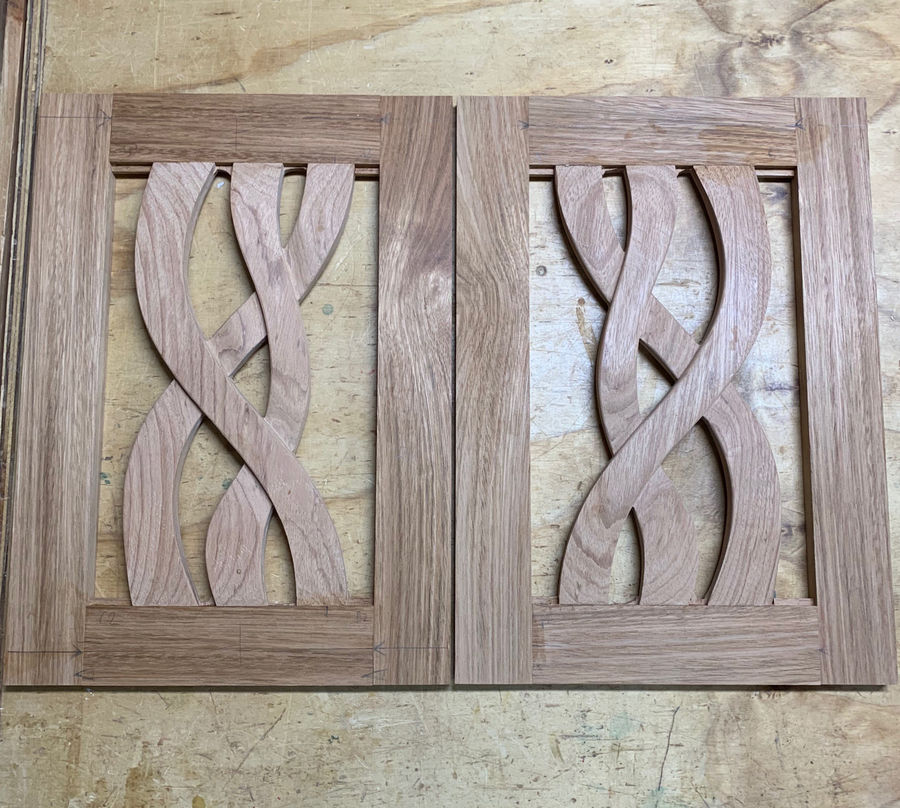 Here is the door assembled, but before the spacers were trimmed to fit. 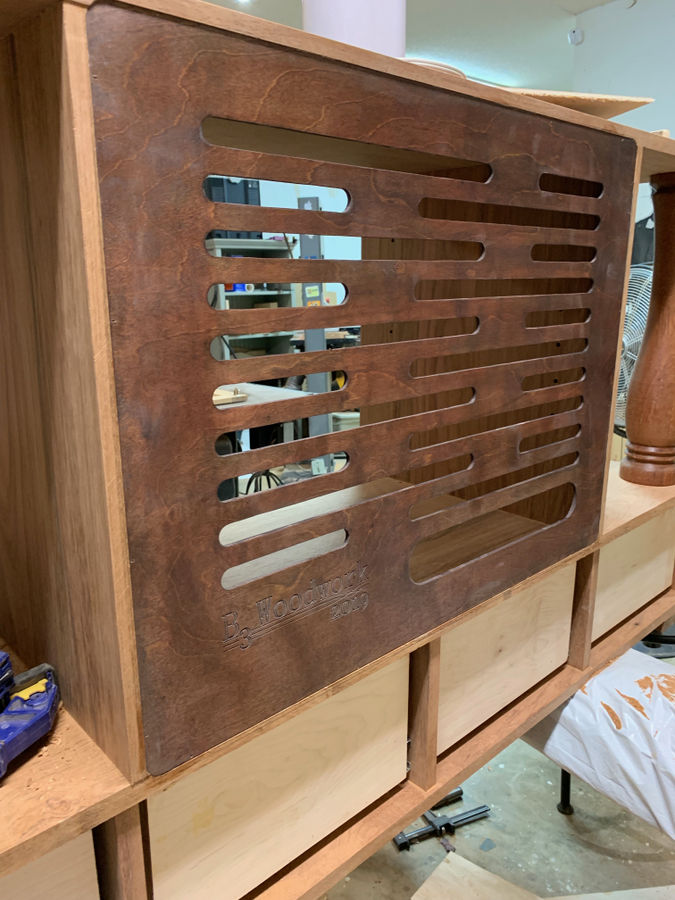 The back panel got some vents and a logo/date.  This is just an inexpensive piece of 1/4 inch birch ply.  I used a combination of dark walnut and red transtint dye to get it somewhere in the ball-park of the color of the finished piece (pictured further down).  It's not an exact match but definitely close enough for a part that is never really seen. 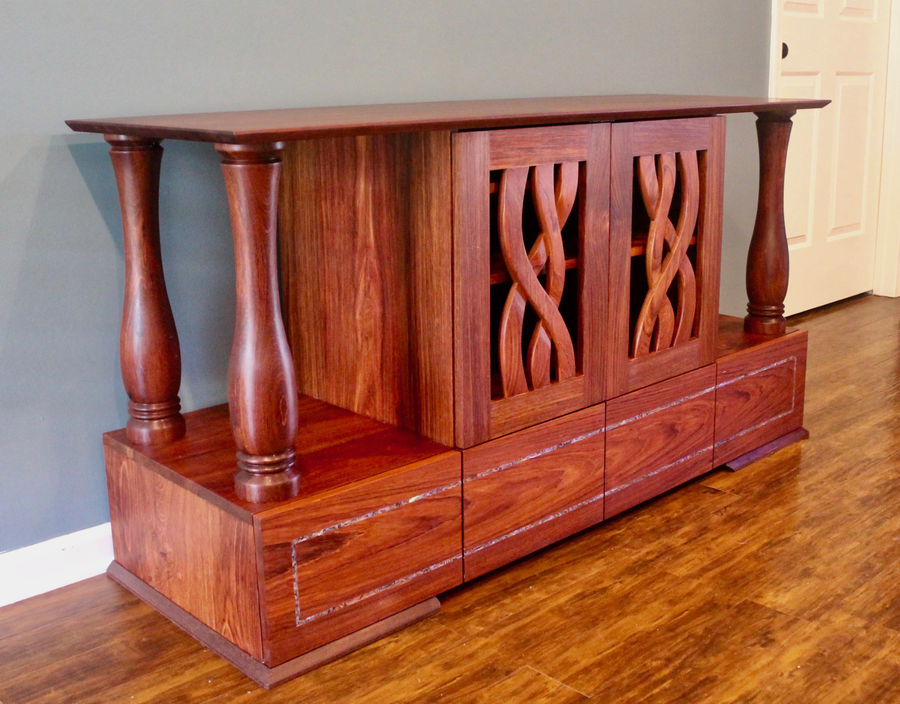 And here are some shots of the finished product. I finished it with an oil and wax combo. 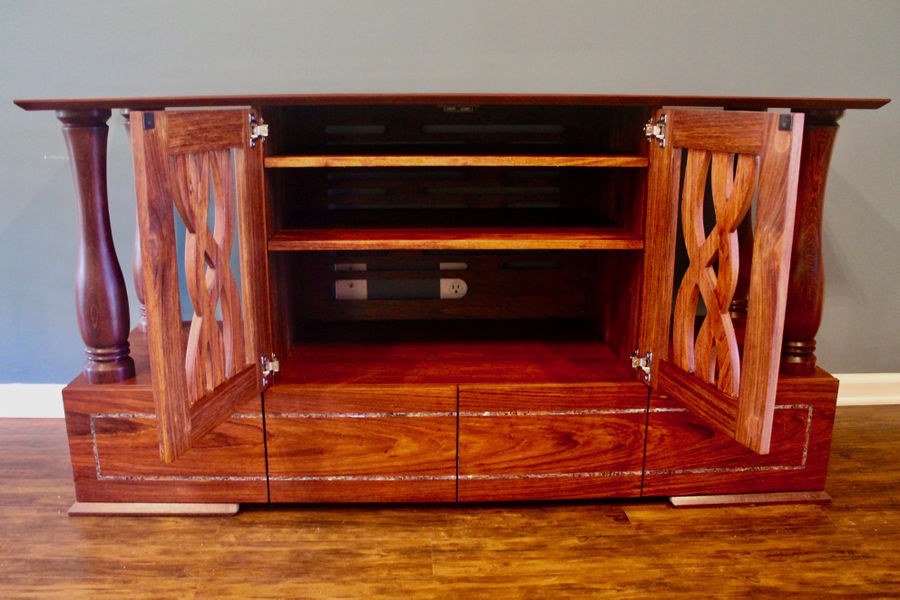 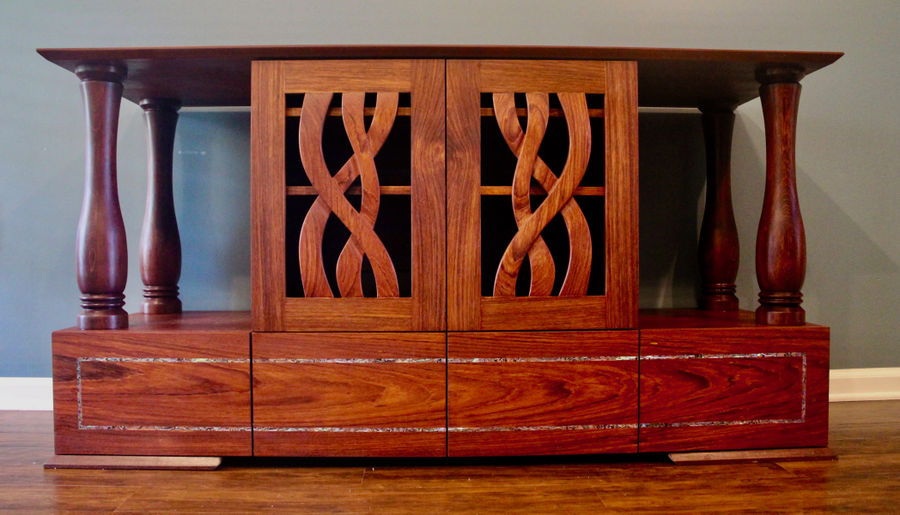 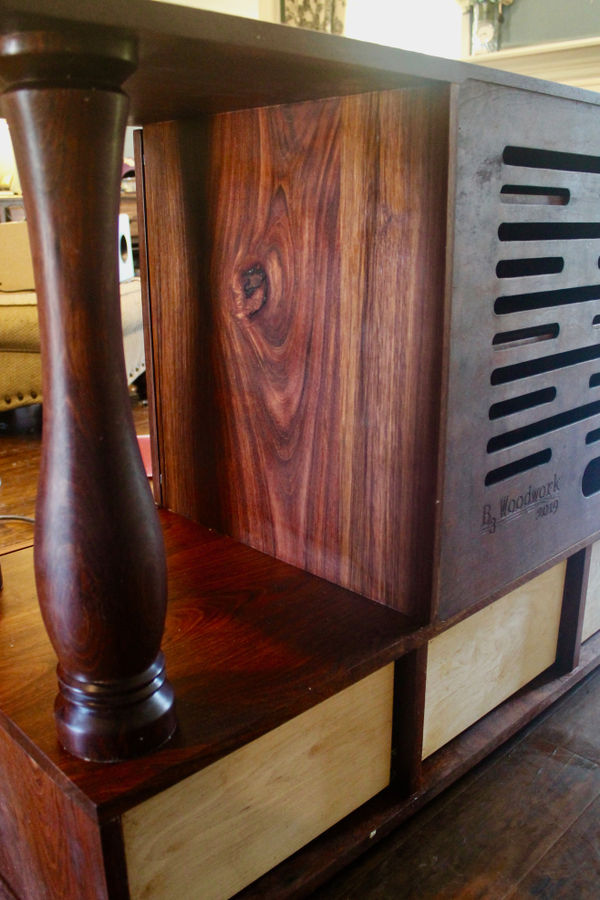 I avoided knots for the most part, but I couldn't help but place this one in a *somewhat* prominent location.  It's stabilized with epoxy, and the surrounding grain was just too pretty to pass up. 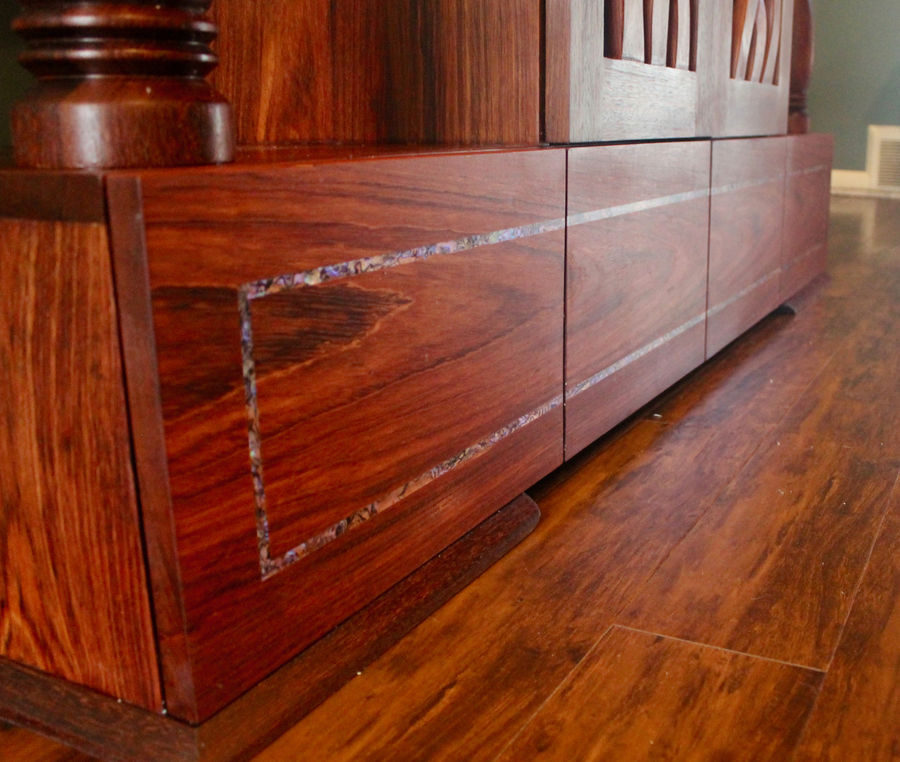 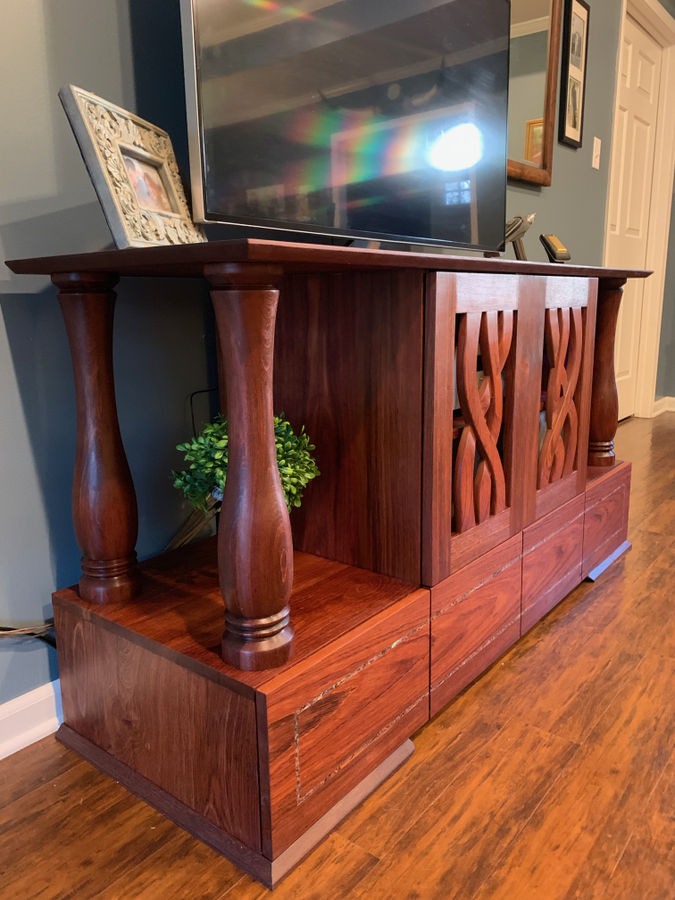 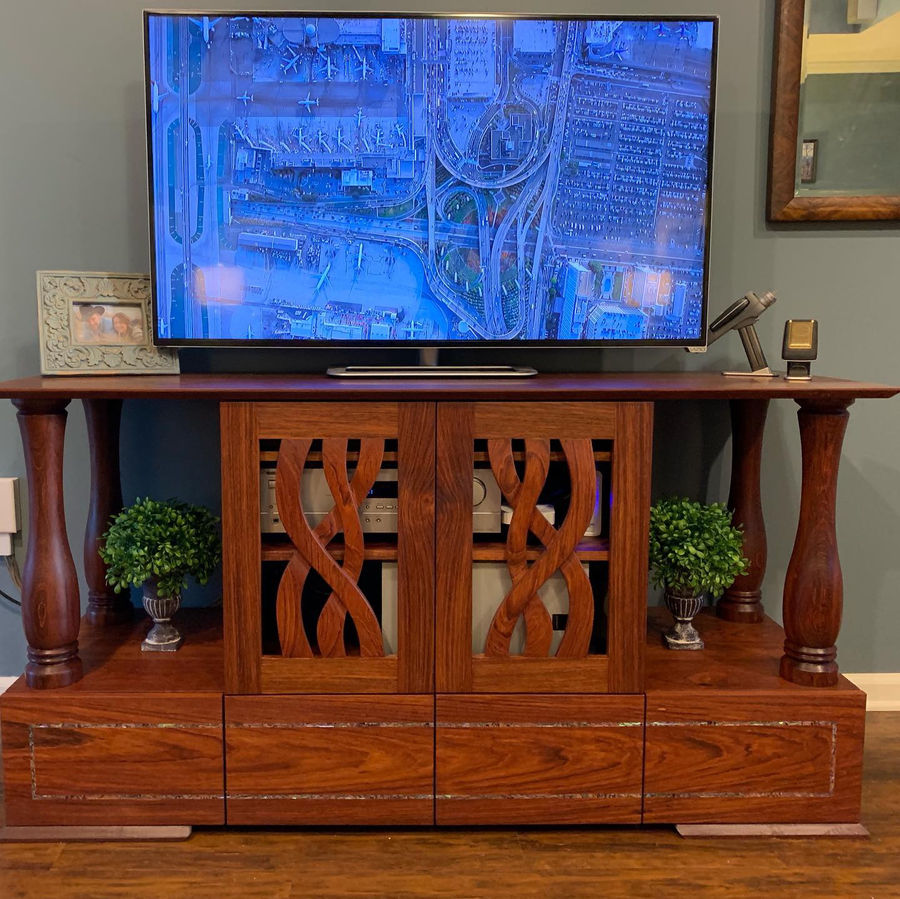 Still working on the decor surrounding this.  We rearranged the entire room here, as the tv used to be over the fireplace. But...we're working on it. 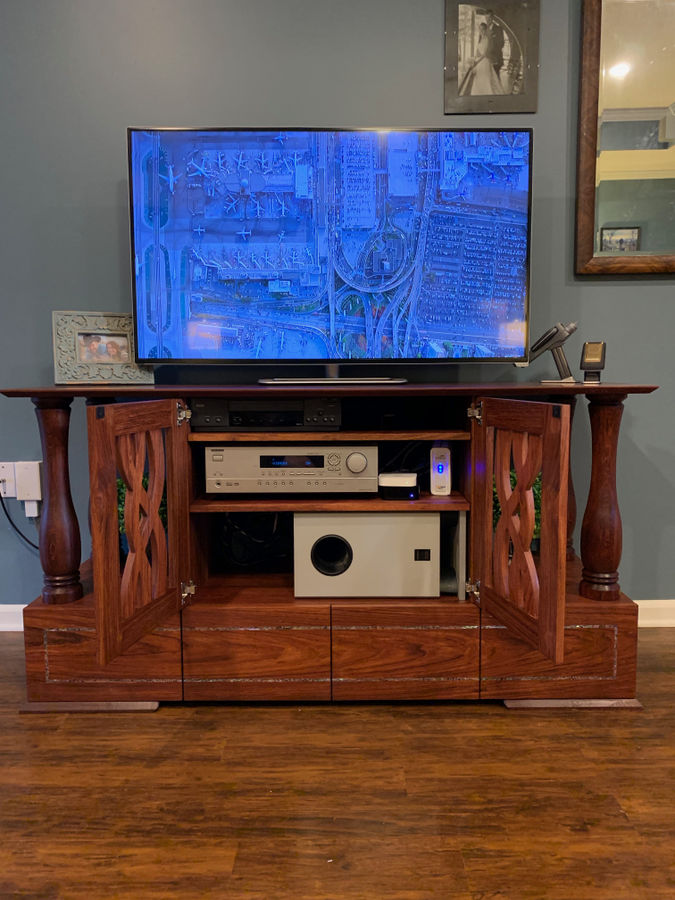 I know this isn't optimal placement for a subwoofer...but it works well enough, and it looks a lot better than it used to.

Wow! That's beautiful work. I love the design, you nailed it.

Thank you for sharing your work here on SimpleCove.com!

Thanks Sean!  I had a lot of fun with this one.

I’ve lurked from time to time on the site so it’s good to finally upload something.