After making a shelf for one family member, that was briefly stored and used at a bedside table at another family members house, i was asked make a nightstand to replace the now-missing shelf. The design is a slightly modified version of the "Cherry Bedside Table" from woodsmith: https://www.woodsmithplans.com/plan/cherry-bedside-table/ #nightstand #Bedsidetable 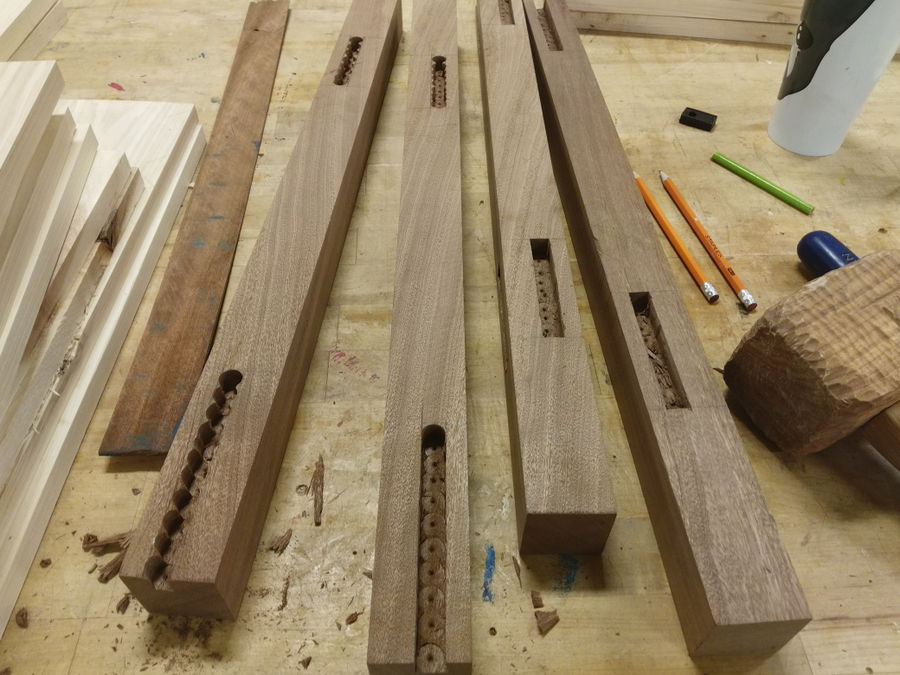 Dimensioned some 8/4 sapele and used a drill press with a fence clamped onto the table to cut the mortises, then squared them off with a chisel. 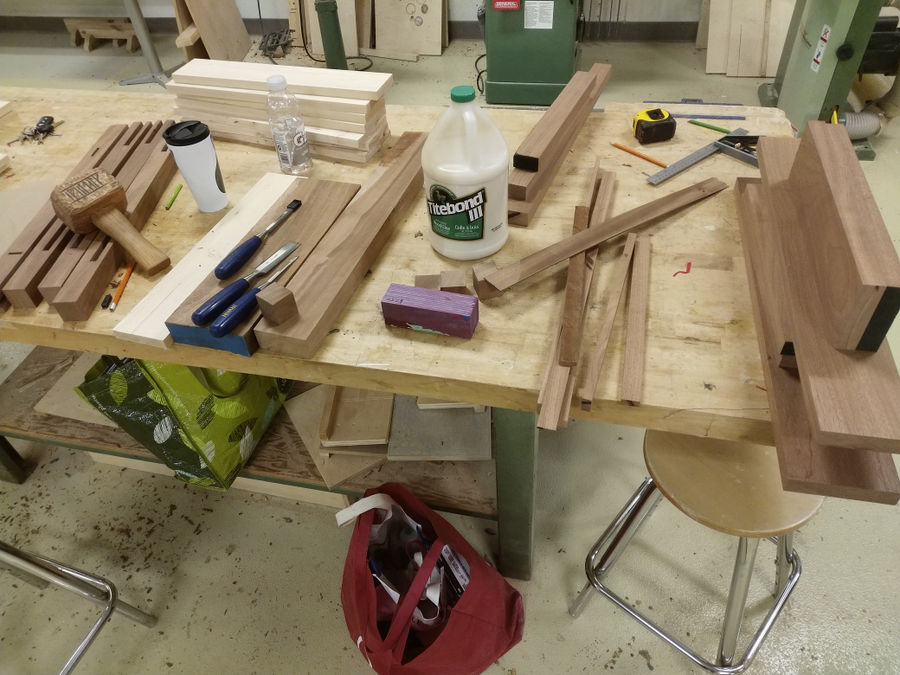 Dimensioned the rest of the required hickory and sapele 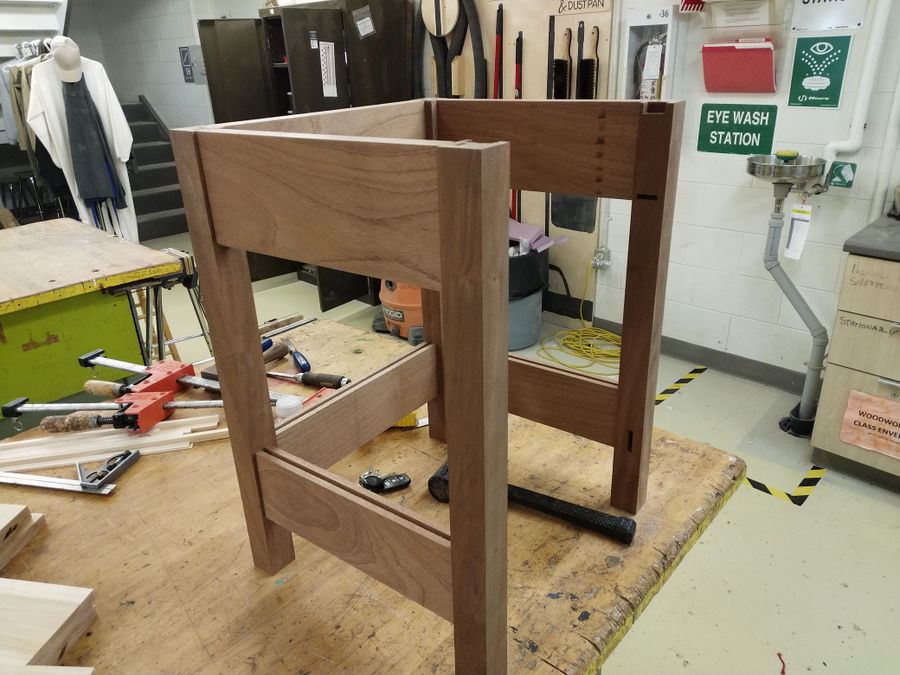 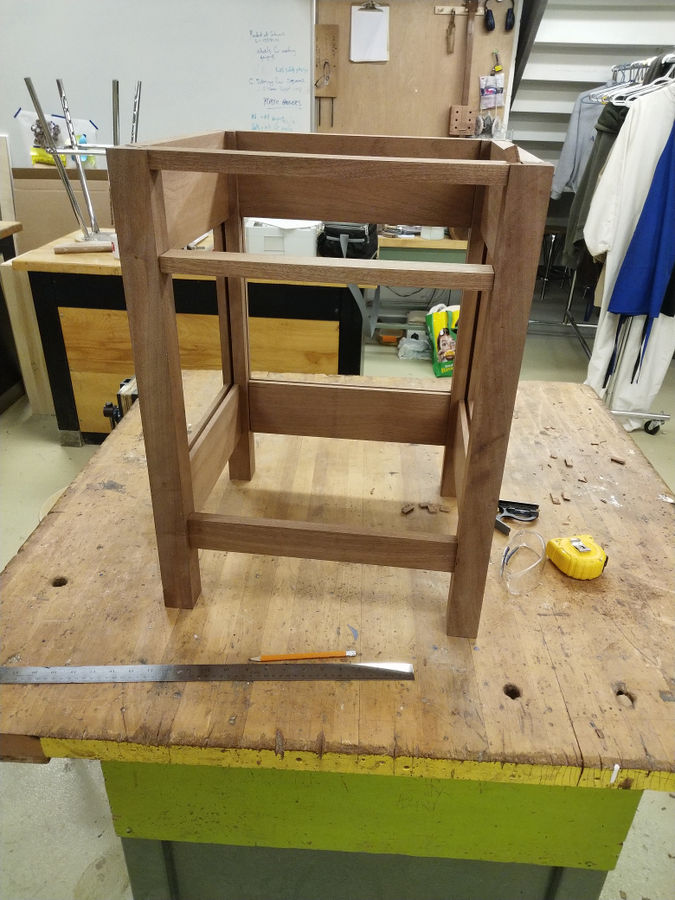 Front apron and front rails were cut last and trimmed to fit to ensure that the glue up is square. 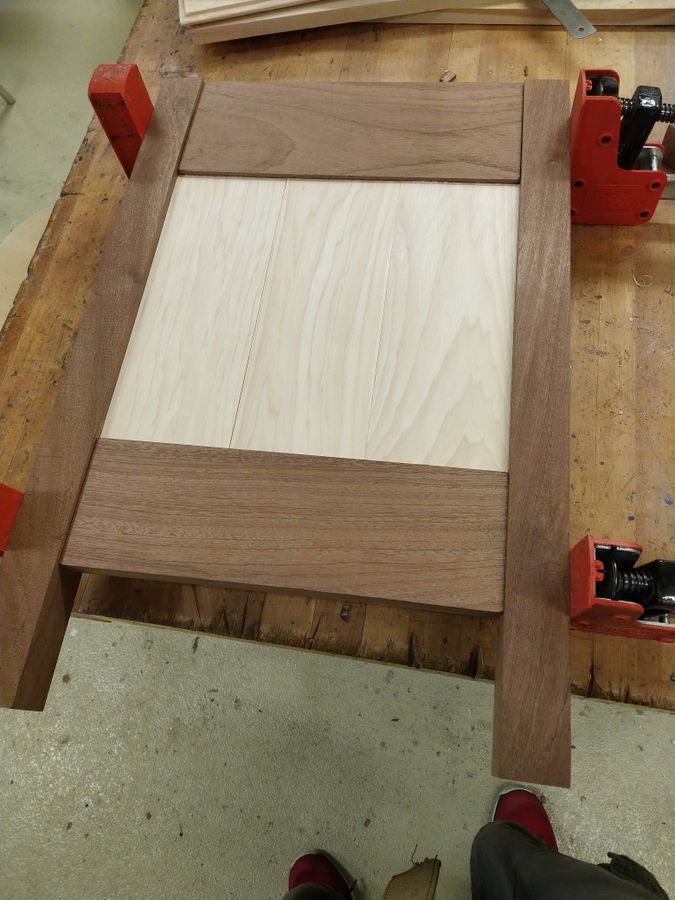 Dry fit of one side. Hickory panels are three free floating tongue and grove boards. 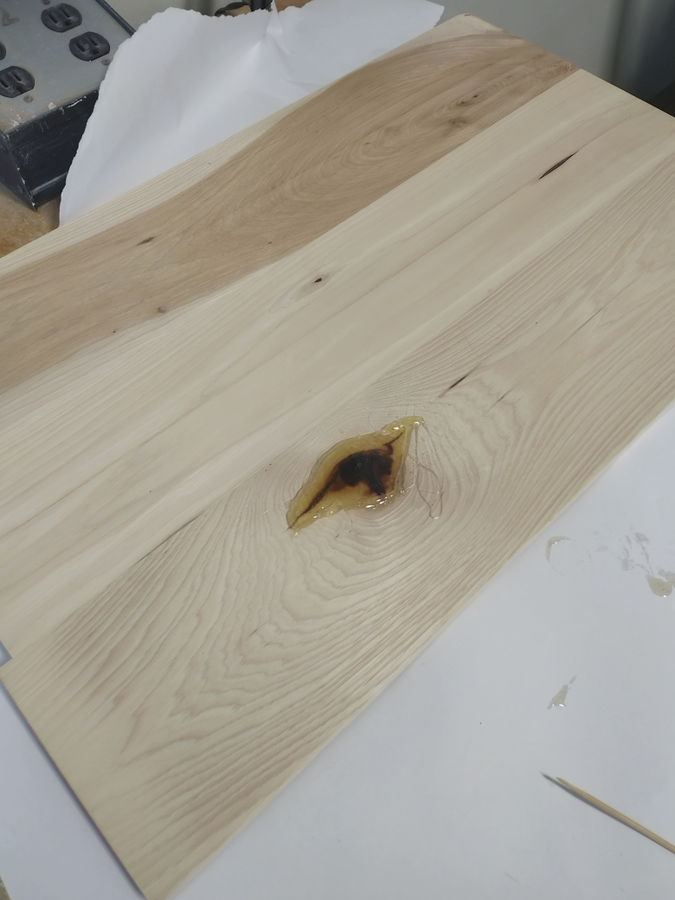 Glued up the table top panel. Unfortunately the last of the usable hickory I had a knot there was no way to cut around and still keep the needed length. Most of the hickory at the mill I bought it from was completely unusable (badly cupped, twisted, or split), so there was no chance to get another board. I ran a bead of hot glue around it taped up the bottom of it and filled it with epoxy. 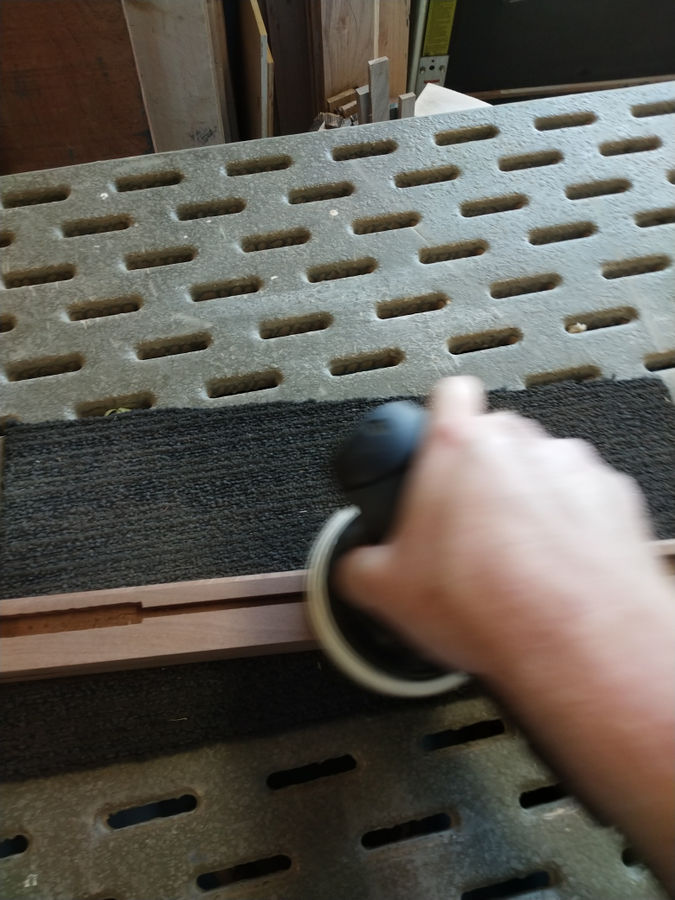 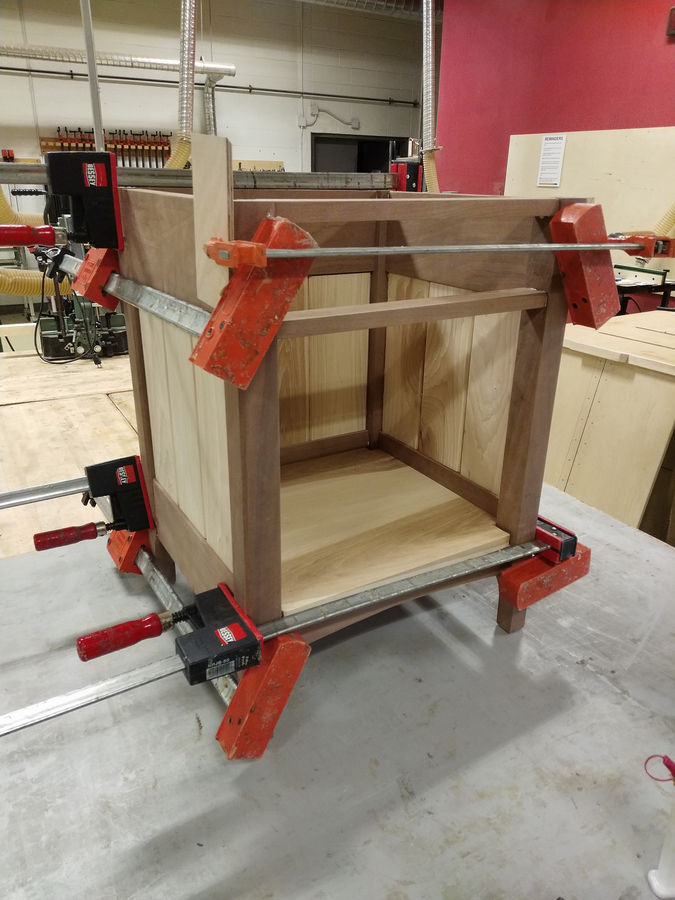 Another dry fit, this time with all the case pieces. Not pictured earlier, cutting the groove in the bottom rails for the shelf and chamfering the edges of the hickory panels 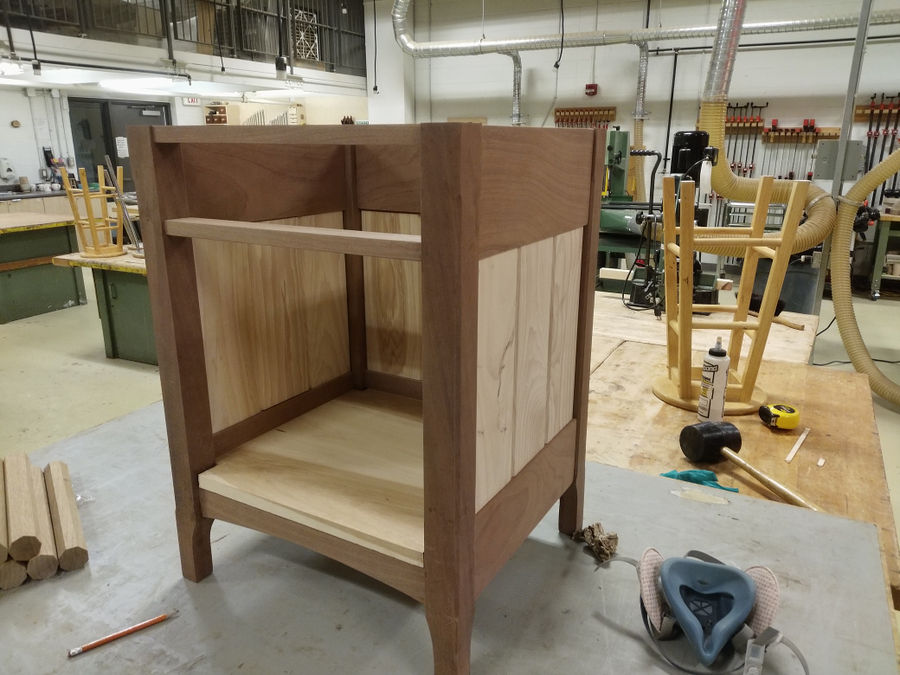 Glued up. Used a chamfer bit on the corners of the legs to give them less of a blocky look. 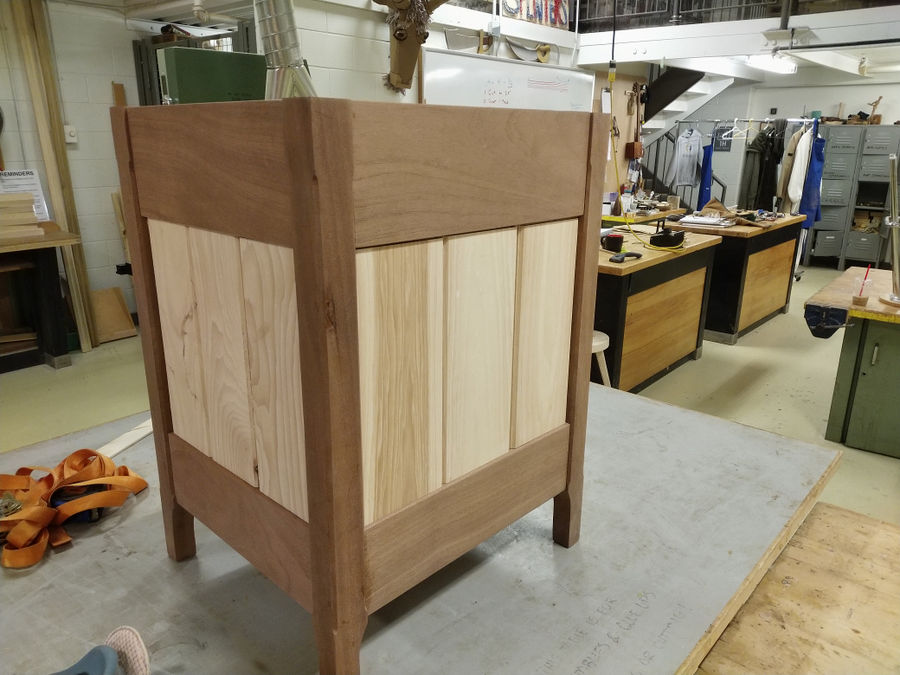 Back and other side 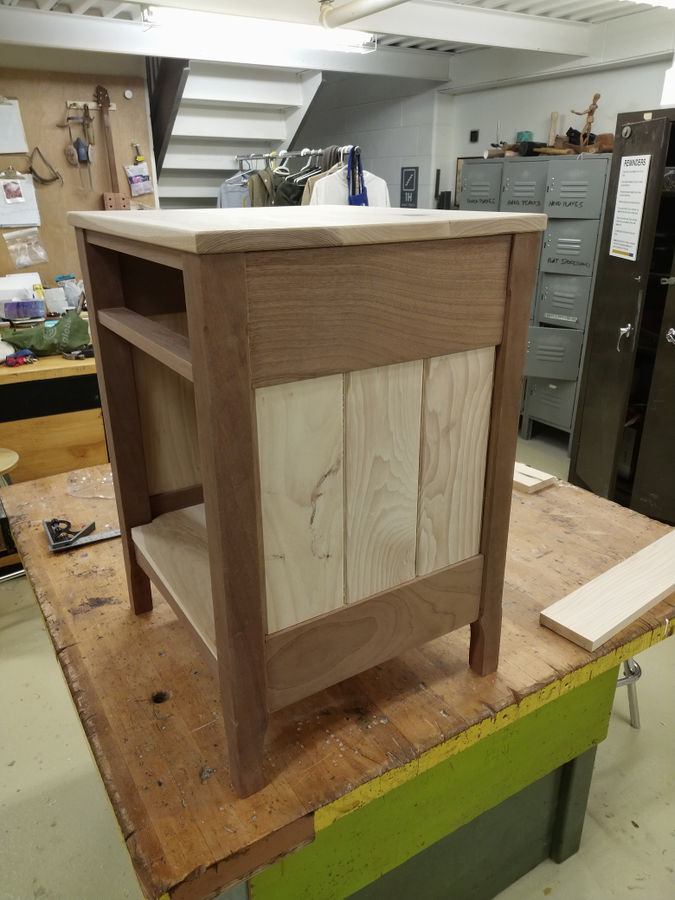 Cut the top to width and length, then hit all the edges with a 1/4" roundover 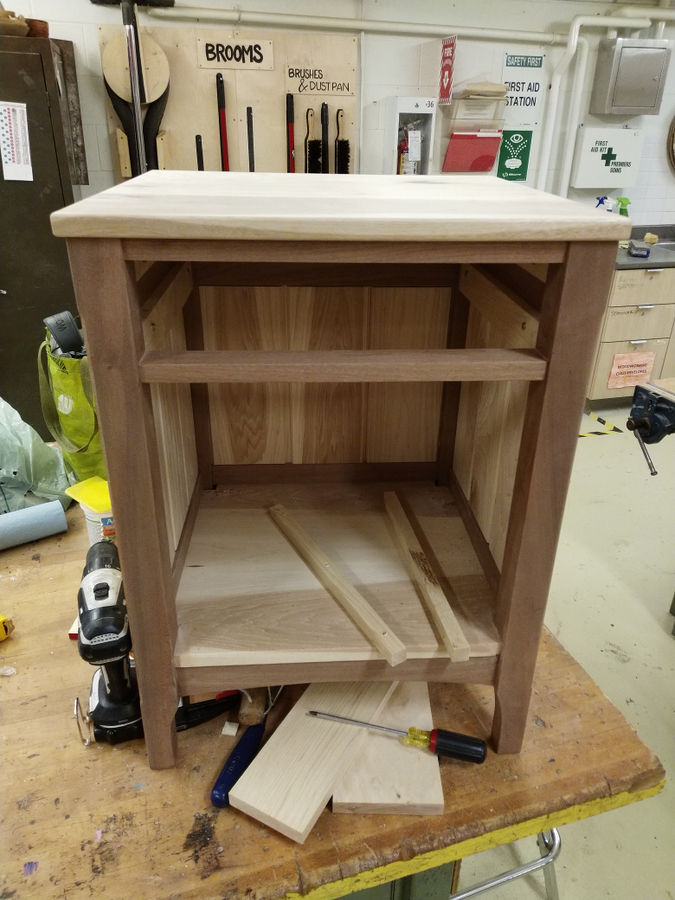 Laying out the drawer runners and kickers. Hickory spacer panels added to make up for the offset between the edge of the legs and the side rails 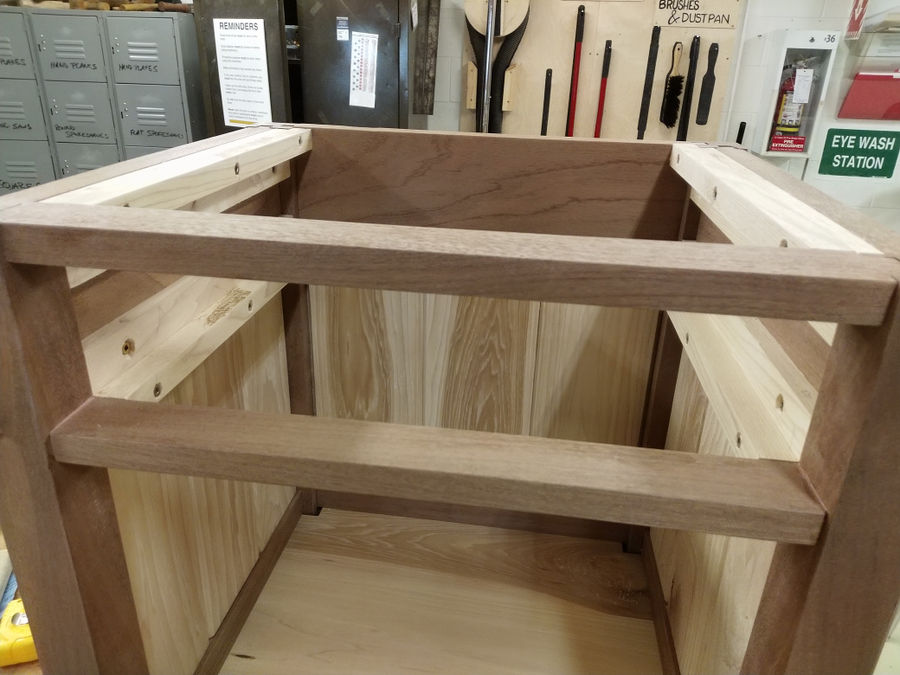 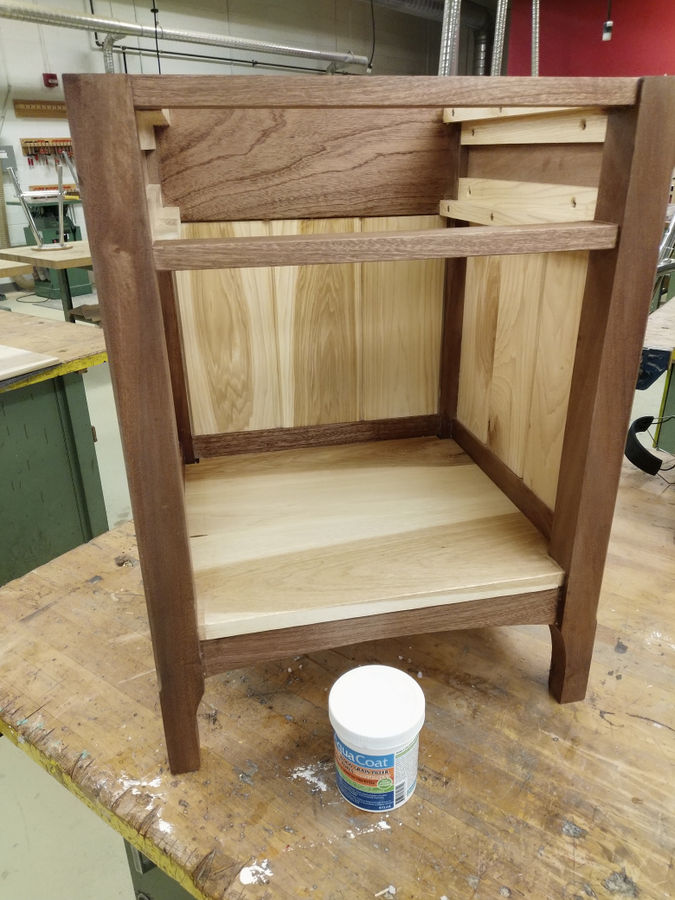 Applied 4 coats of a clear water based grain filler (AquaCoat) to all surfaces of the nightstand. The sapele took it very well. I probably could have gotten away with 3 coats, had I remembered to wet the grain when prepping. 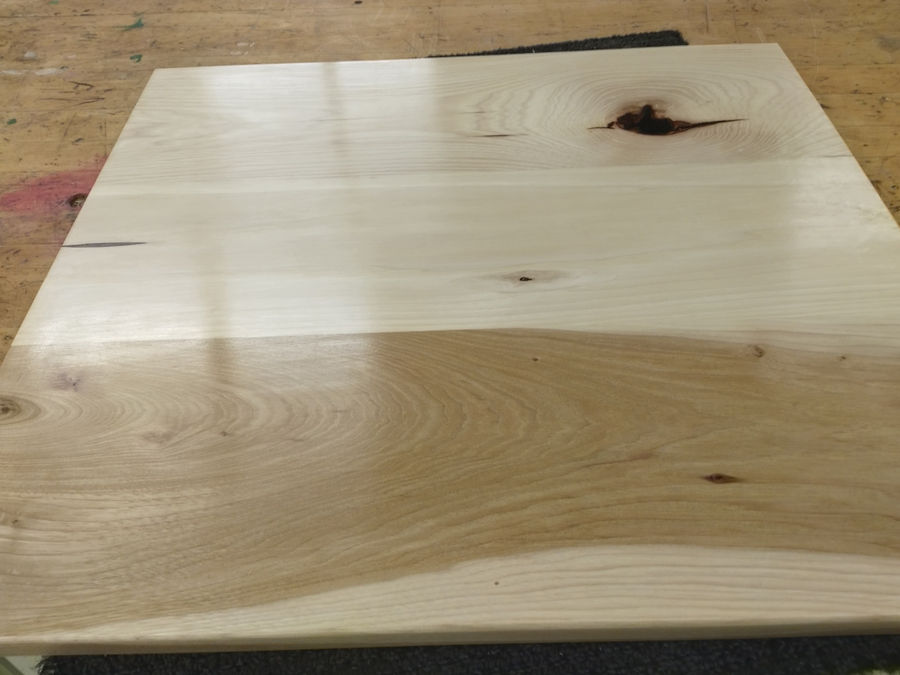 Applied 7 to the top. The hickory absorbed what seems like an impossible amount, but I could still visibly see pores were not being filled. I'm sure I could have put more coats on, but I wanted to get on with it. 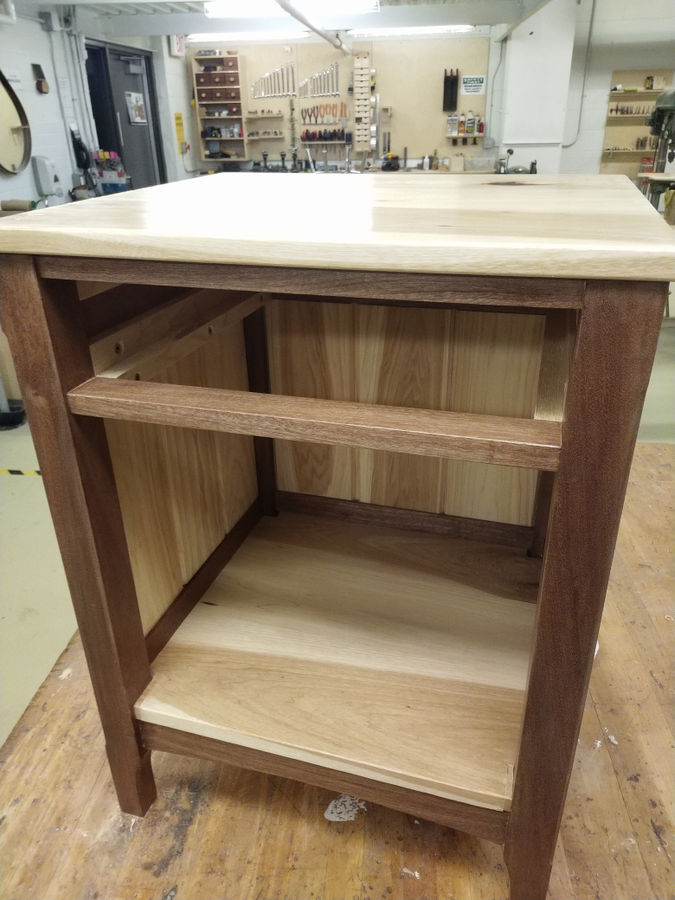 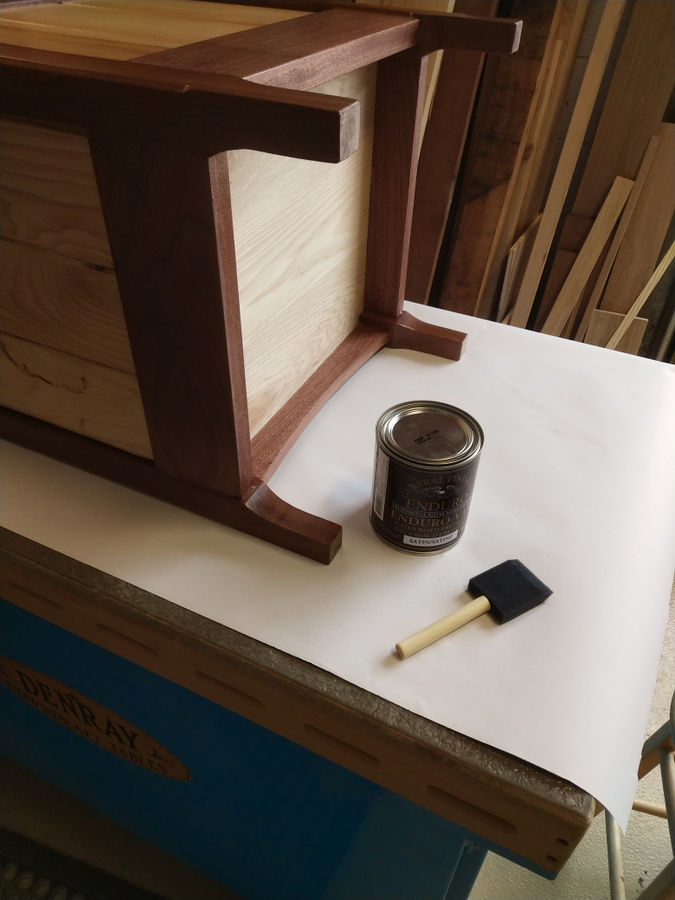 My original plan was to use some kind of wiping oil varnish blend as the topcoat...then I remembered that I had just spent several days putting water based grain sealer on the nightstand. After spending a week looking online for a water based finish that will actually work if thinned enough to be wiped on, I found several, none of which could be shipped to Canada . I gave up and went into lee valley to see what they'd recommend. They didn't have anything that they thought could be thinned enough to be applied with a pad, but they did have water-based poly and some water-based lacquer. They recommended General Finishes EnduroVar, which was great, because it was the only water based finish they weren't out of. But they only had Satin >:( 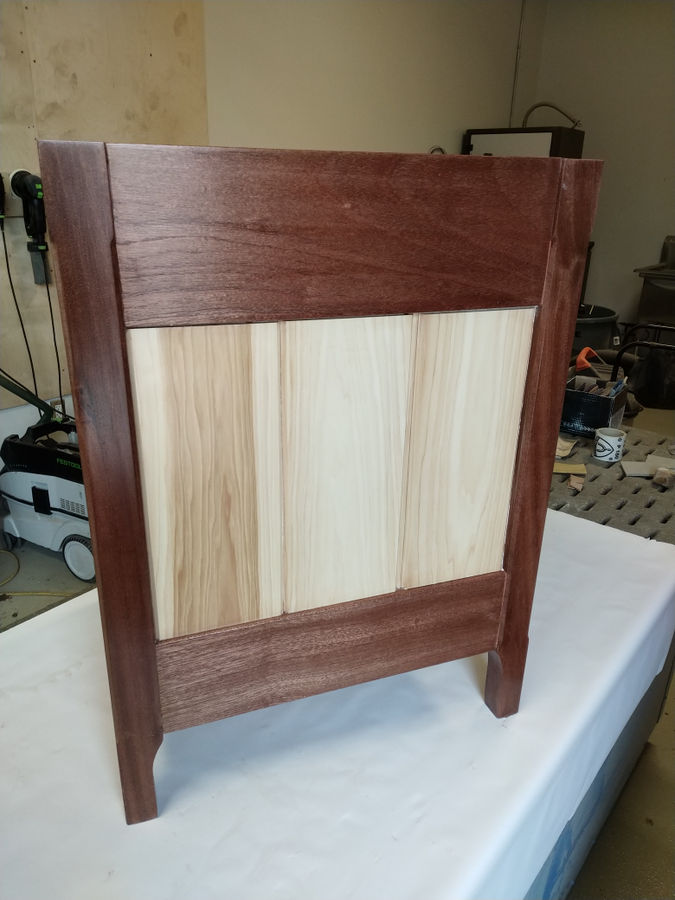 I hate film finishes. I work in a shop that's always got dust in it, and even if I apply them in a clean room, I can't seem to get rid of the brush streaks. This seemed to be go on pretty evenly and leveling out most, if not all of, the brush streaks. 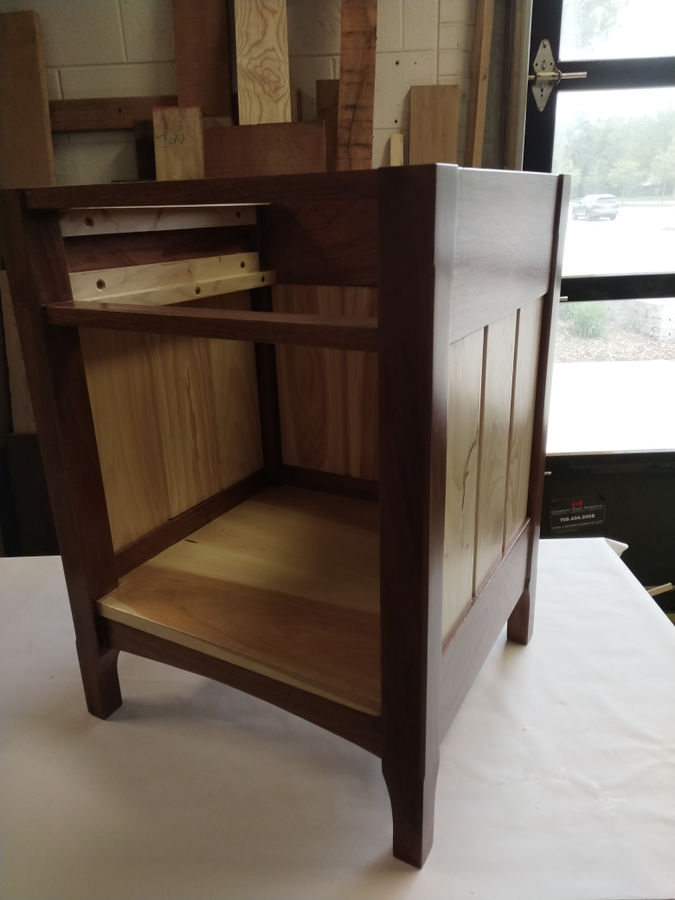 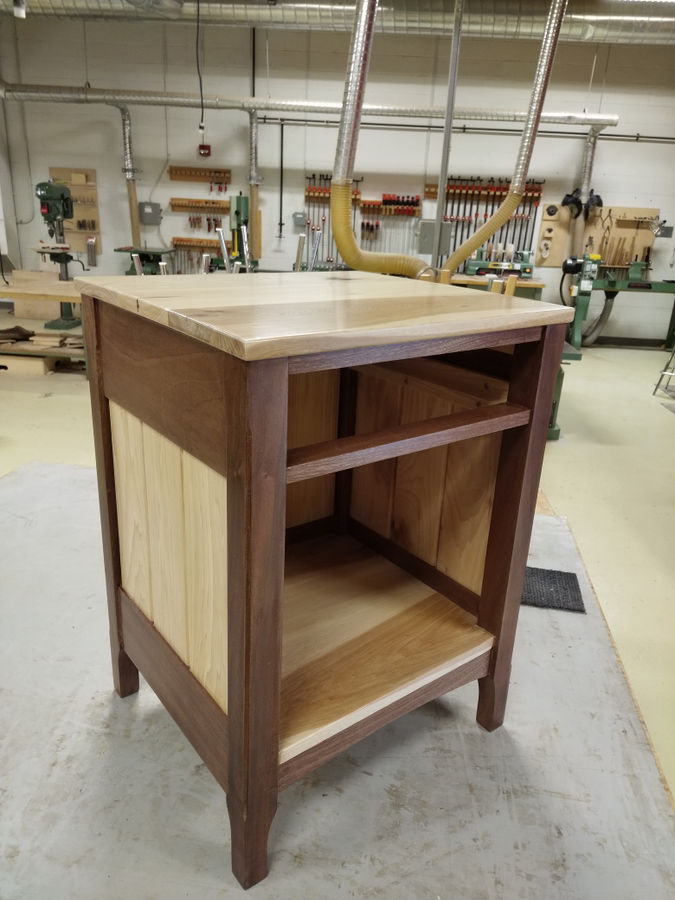 I applied 3 coats of poly to all surfaces, sanding with 320 grit between coats. 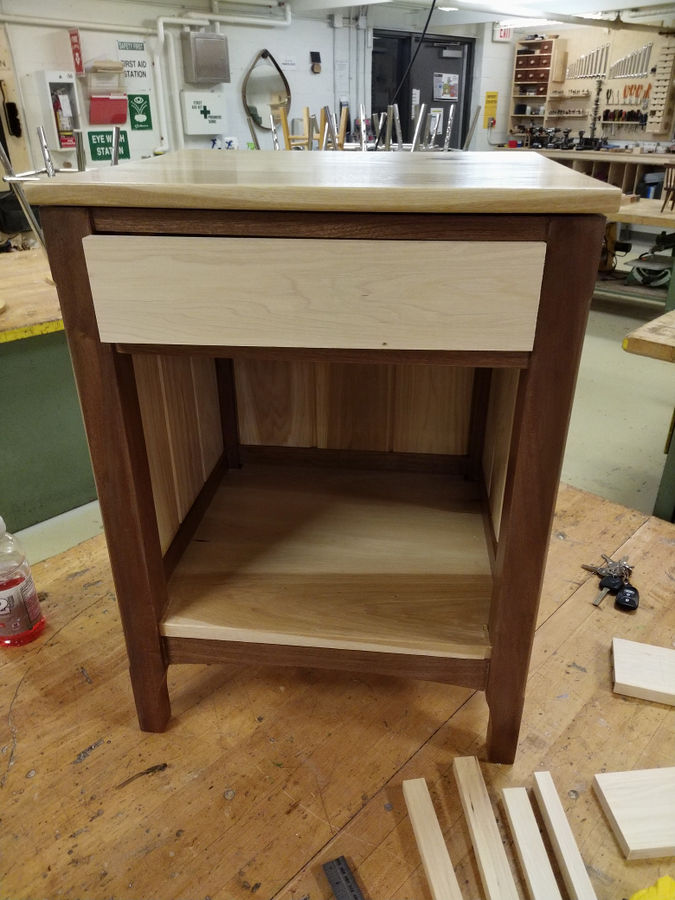 "Wait, wasn't I supposed to make a drawer". Yes, yes I was. I cut the sides for the drawer out of hickory. Pictured here, me trying to figure out why it wouldn't fit, turns out the front rails are slightly tapered inwards. 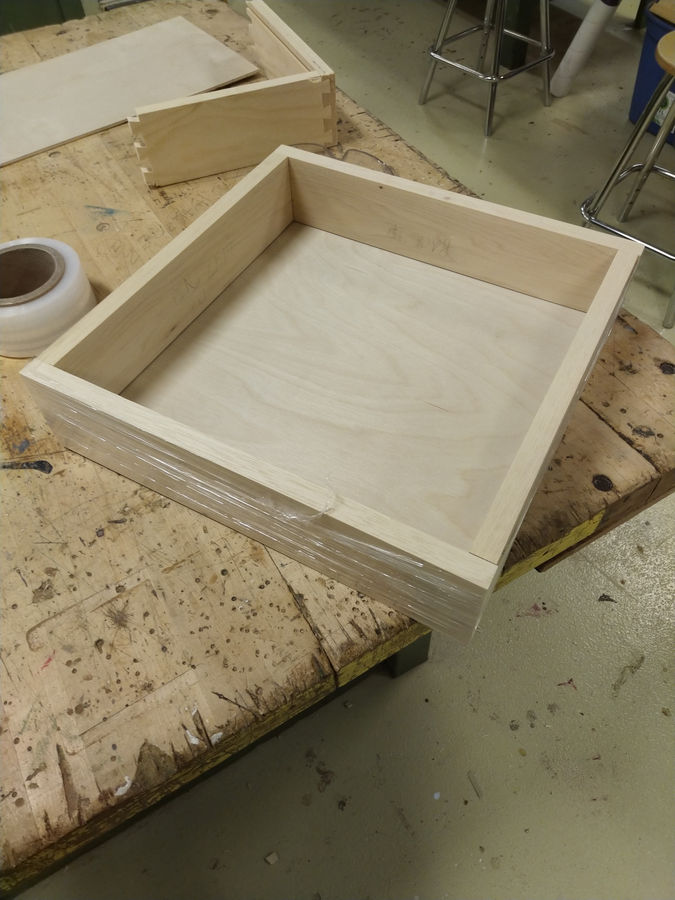 Joined the drawers with half-blind dovetails. Used the Leigh D4R router jig because I have shit to do that doesn't involve spending an inordinate amount of time on the joints likely to never be seen 95% of the people looking at the nightstand. Shrink wrap is because I couldn't find the band clamp and I needed to dry fit the joints. 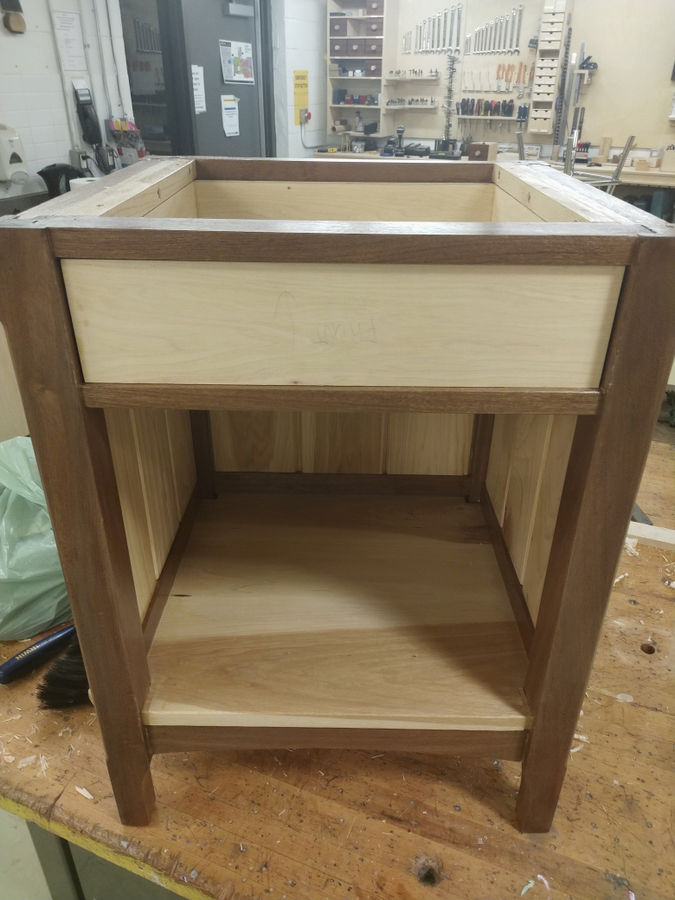 Drawer assembled and tweaked to slid freely, then finished the same way as the rest of the piece. 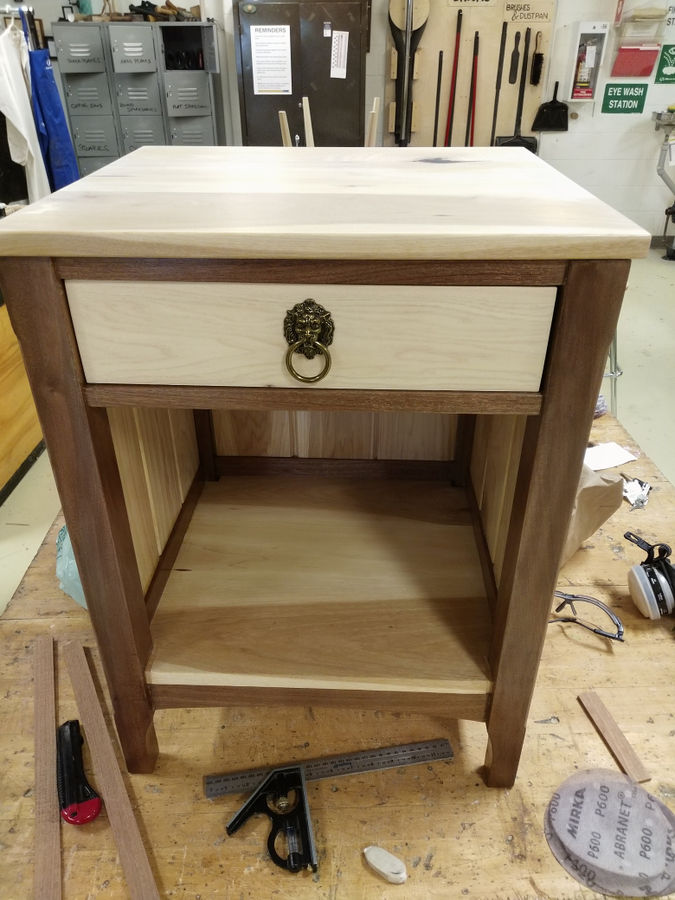 The ring pull was chosen by the recipient. 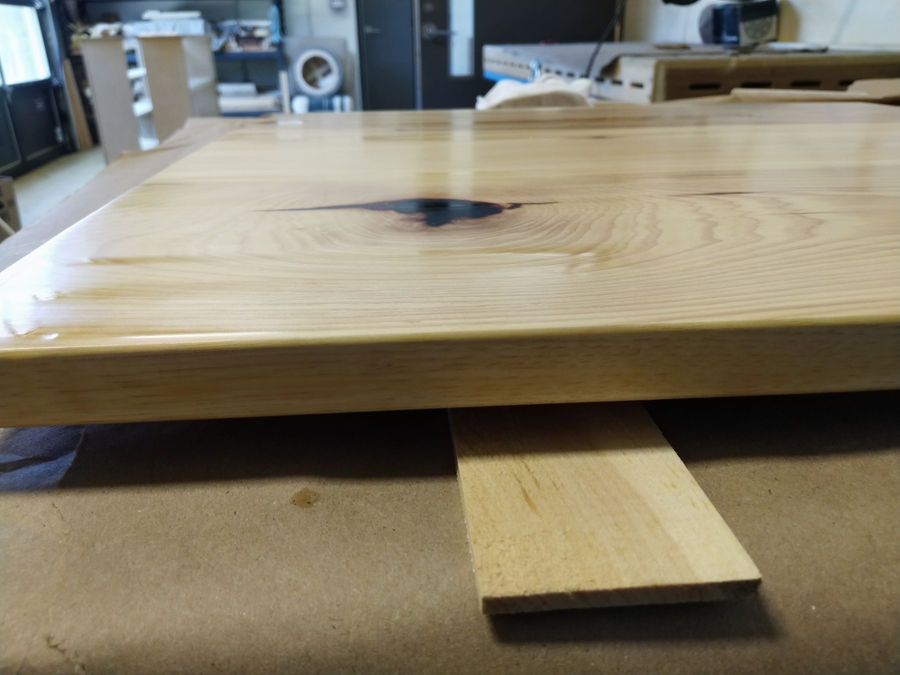 The top was the only place I had issues getting a streak free finish on. While attempting to level it out I ended up sanding through to the bare wood. I removed the rest of the cured finish and applied double the number of layers. 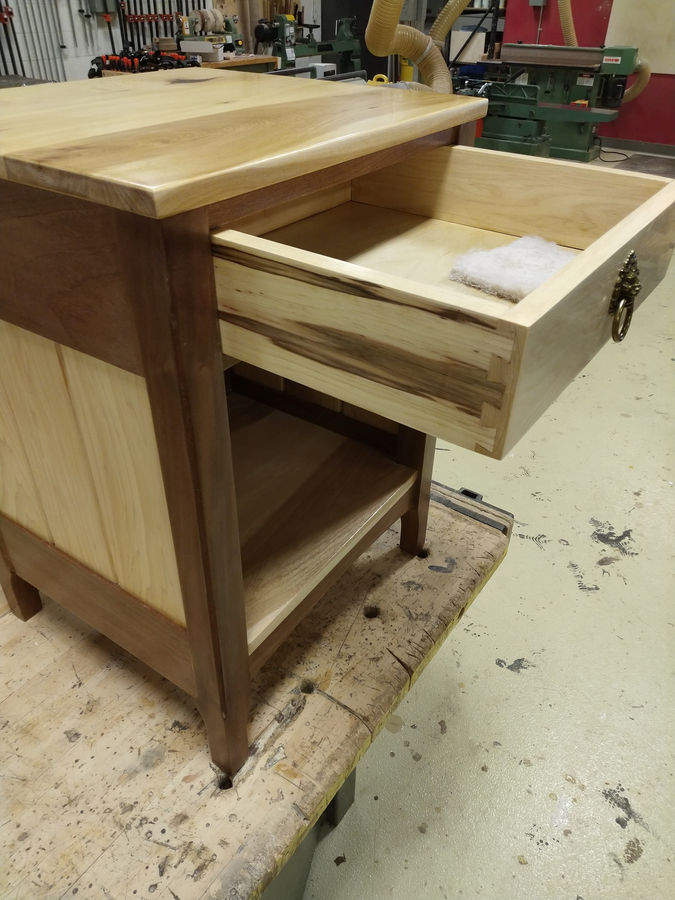 Picture of the dovetails that I apparently never took at any previous time during construction. 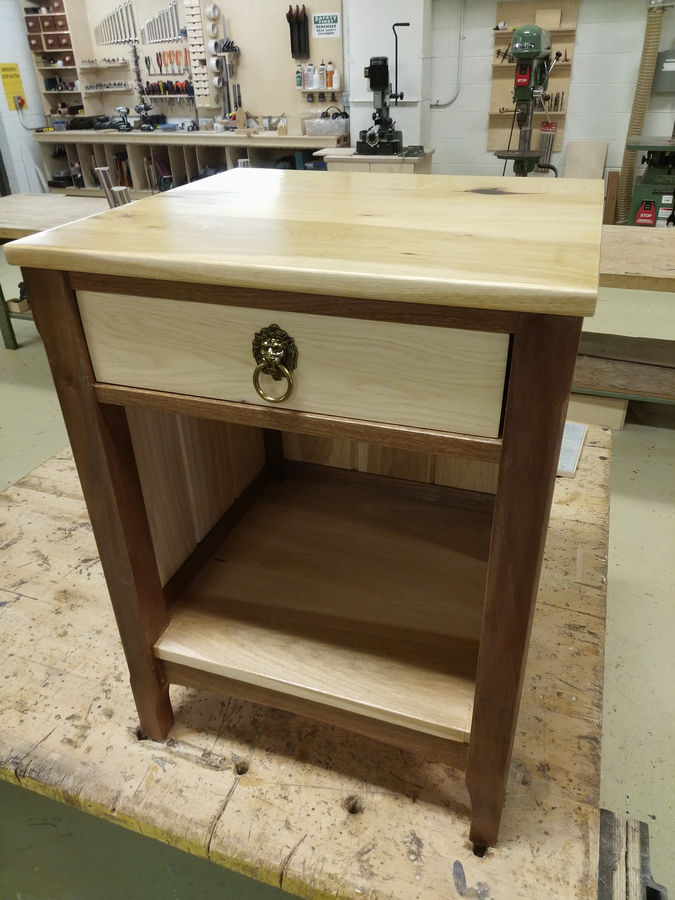 I leveled off the finish on the top with a orbital sander and some 320 grit once cured. I then did some light sanding with 400 & 600 grit, finishing off with a 3M superfine buffing pad and some pastewax.