This is my version of Box 30 from Matt Kenney's 52 Boxes in 52 Weeks Challenge. I tried to stay as close to the original design as possible. There are a few deviations but they're subtle and don't change much. Luckily, Matt has posted a good amount of information hinting at how to build this box. It's a uniques design and was a lot of fun to build. 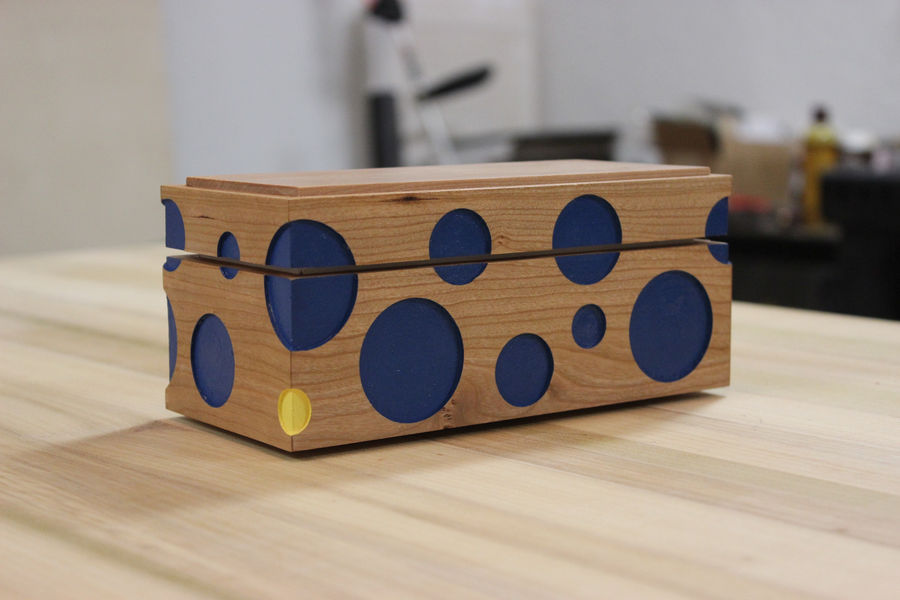 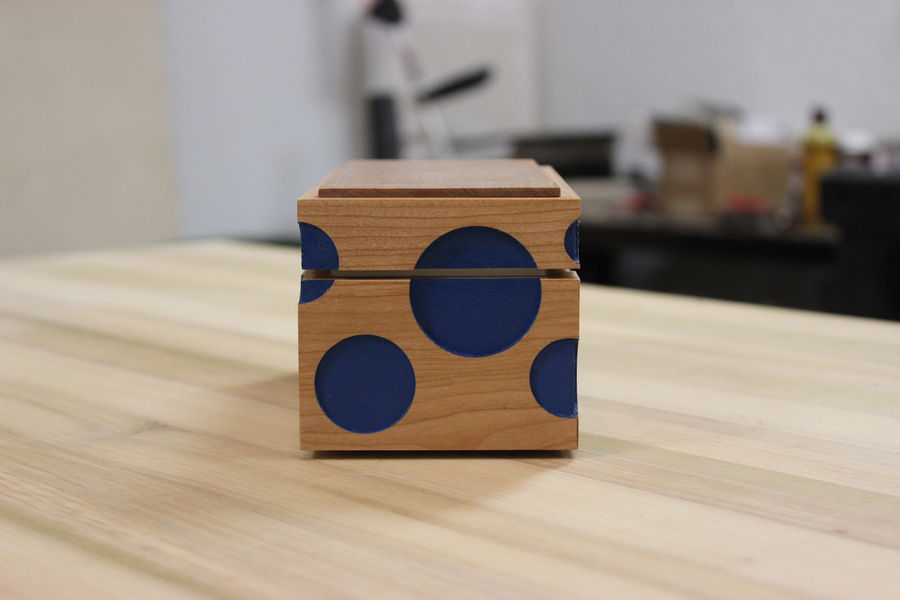 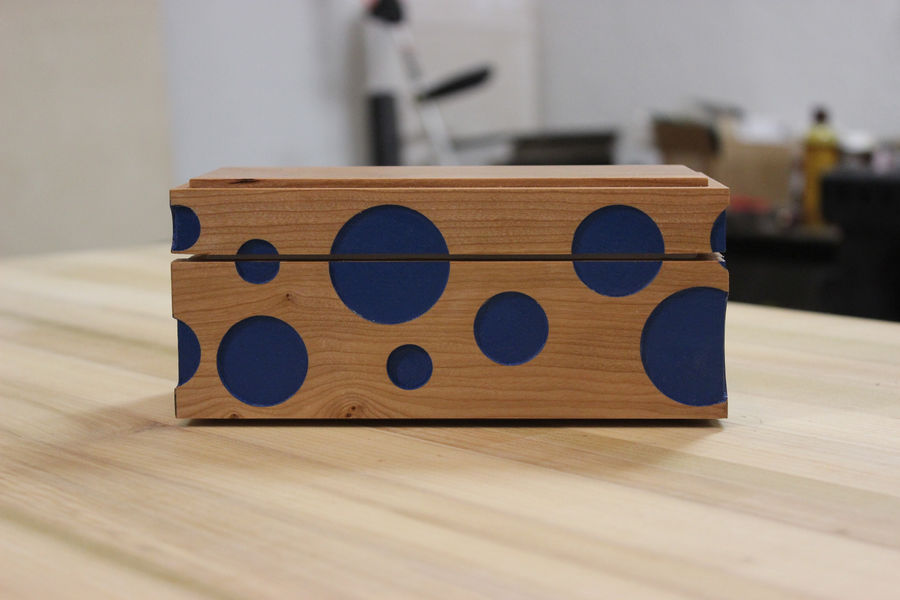 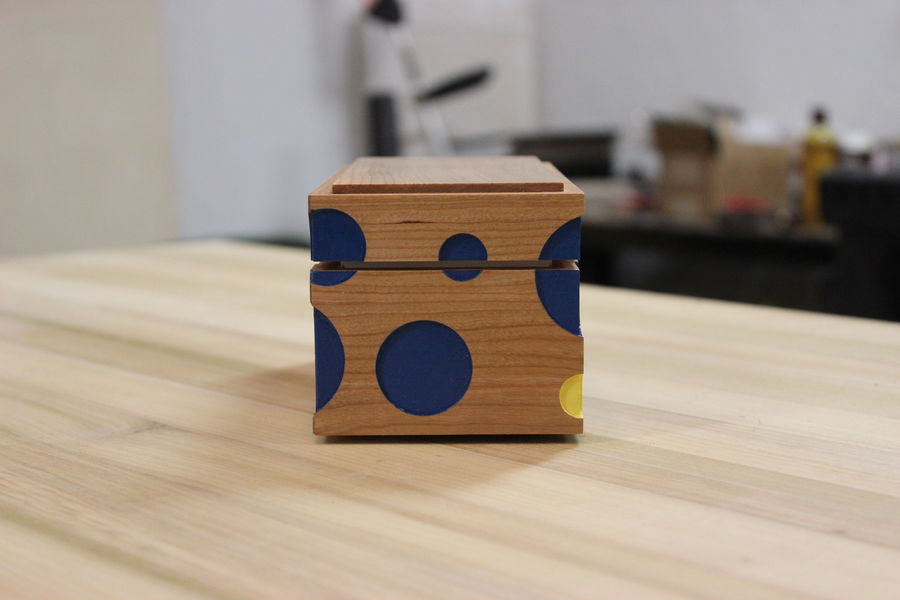 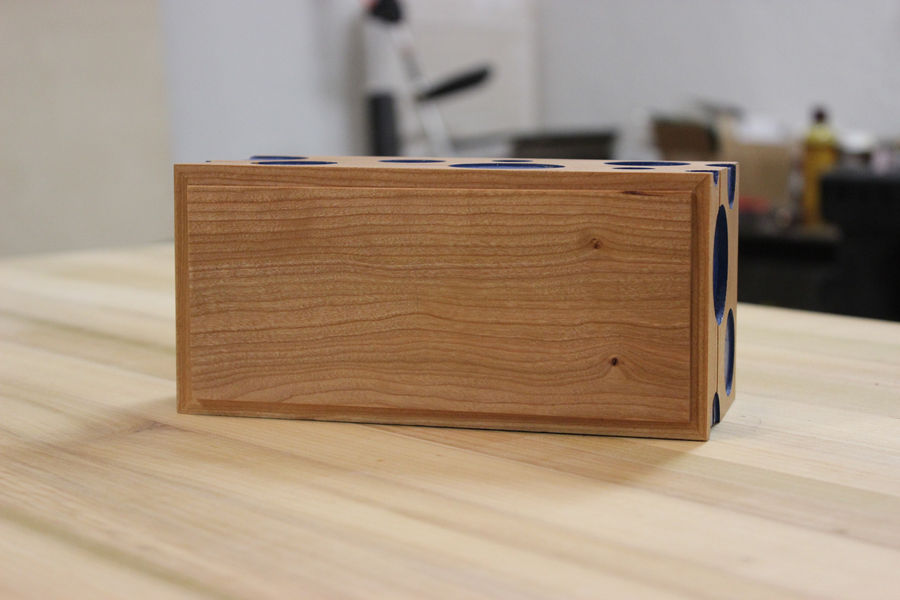 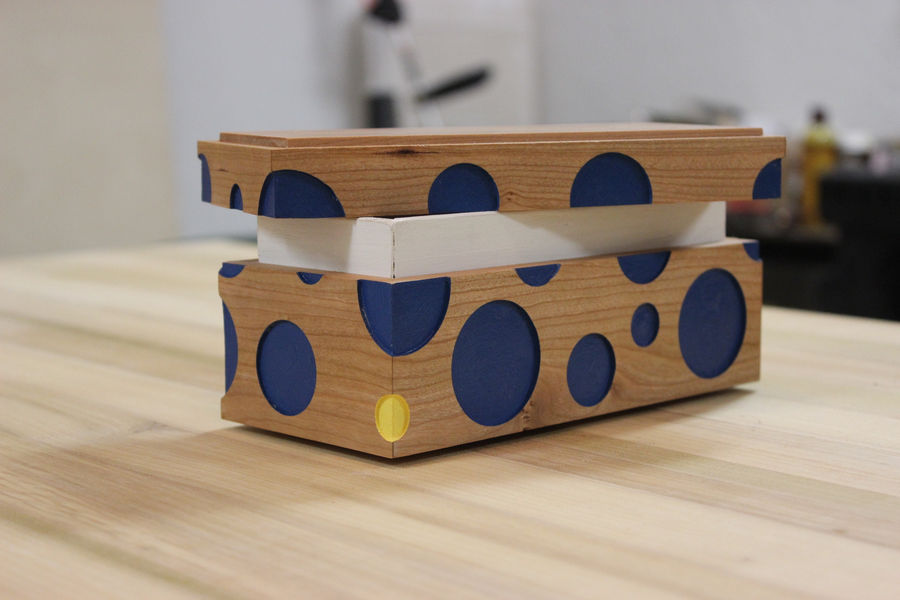 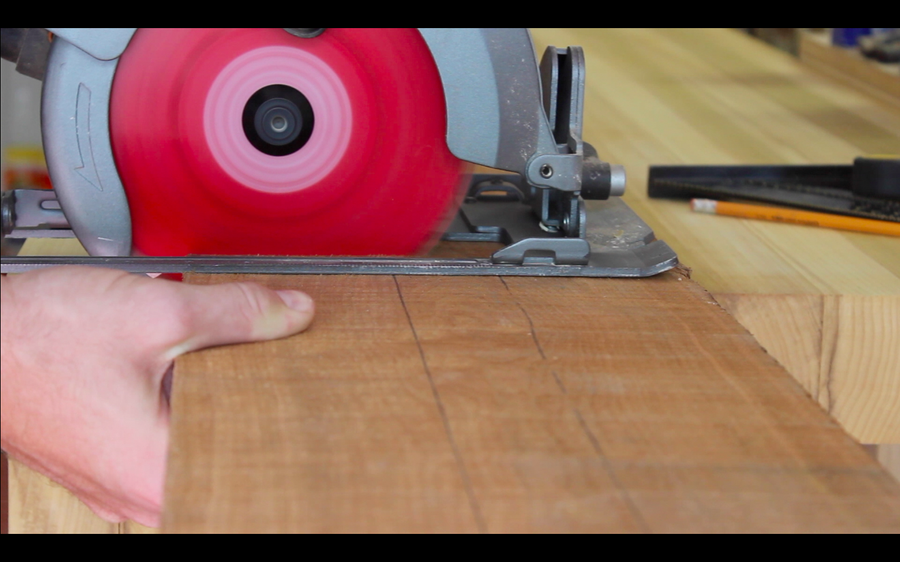 The first step is lumber choice. This piece of cherry was about 9 inches wide. Each side had some good quartersawn grain that Kenney typically uses in his boxes. I think one of the reasons he does this is because it plays well to the scale of his boxes. A nice tight and narrow grain works well with smaller boxes. 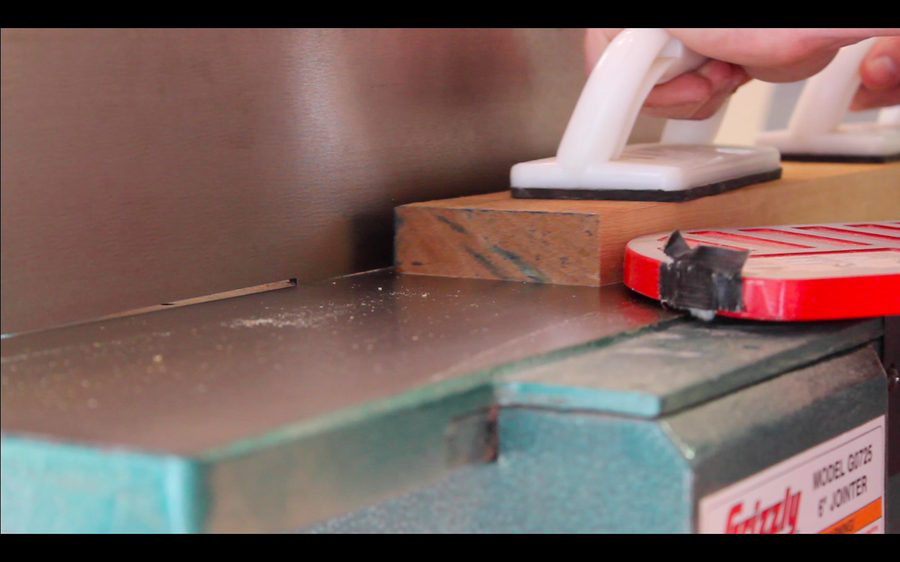 I went through the milling process: face joint, edge joint, plane, and rip to rough width. 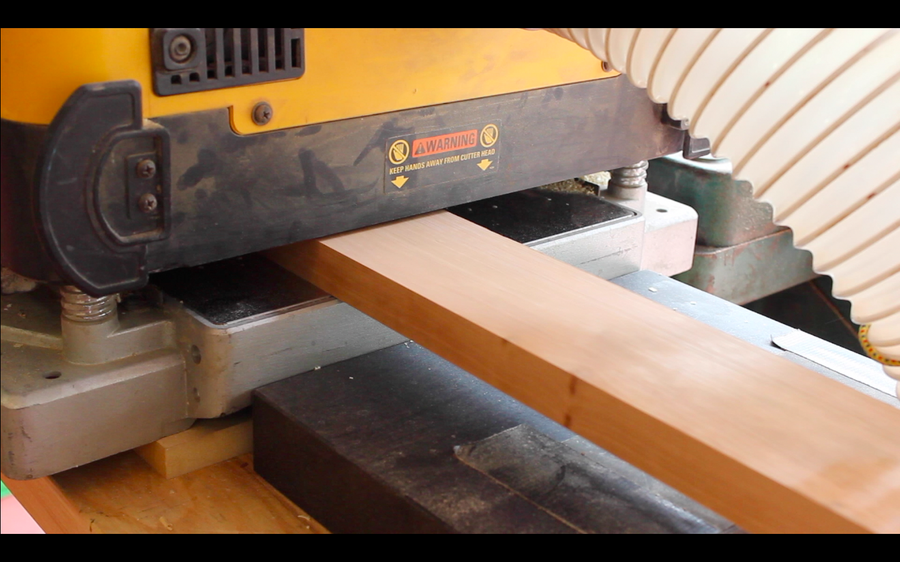 I wasn't shooting for any thickness here. I just want two flat and parallel faces. 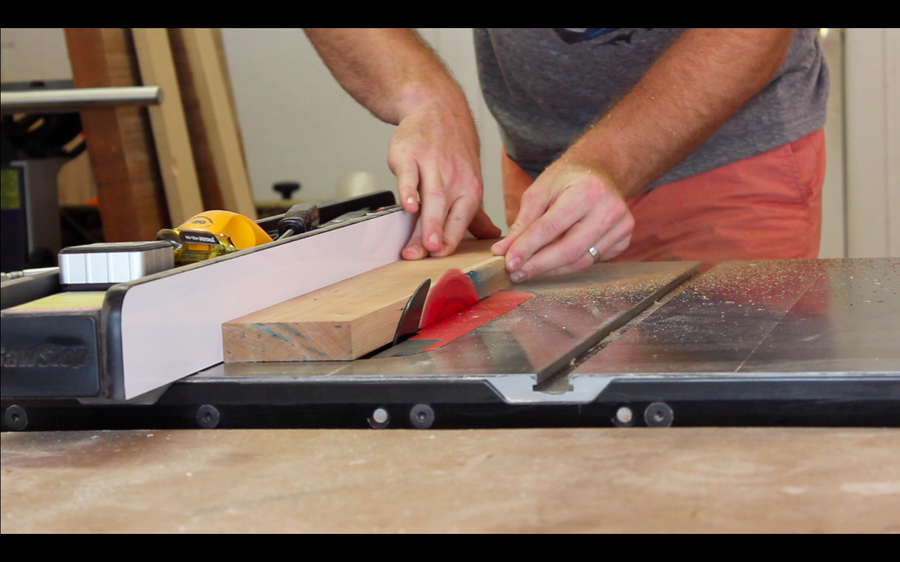 I ripped the other edge so that I now had 4 square sides. 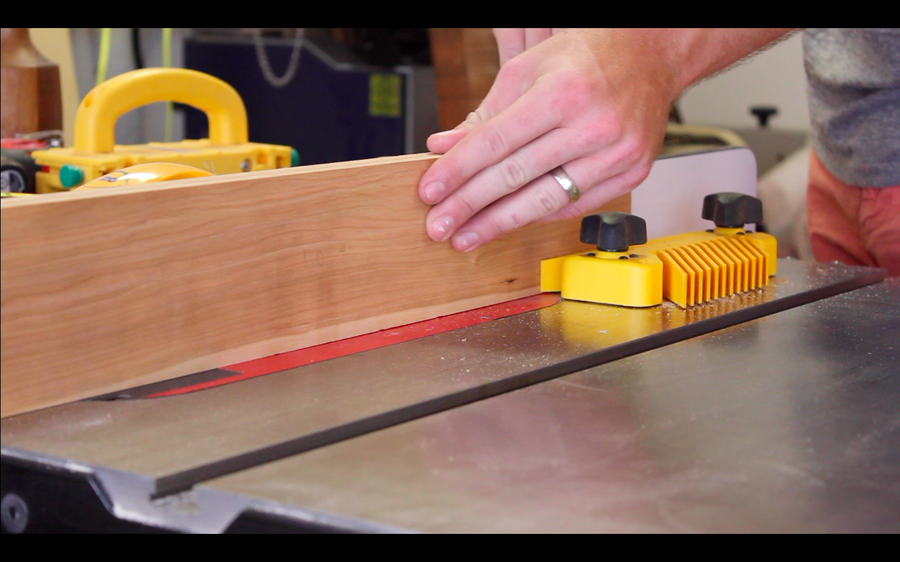 My camera died at this point so this picture and the footage in my video are actually fake. Nonetheless, I'm showing the process of resawing this piece into two thinner pieces. This is important for the 4 side grain match. 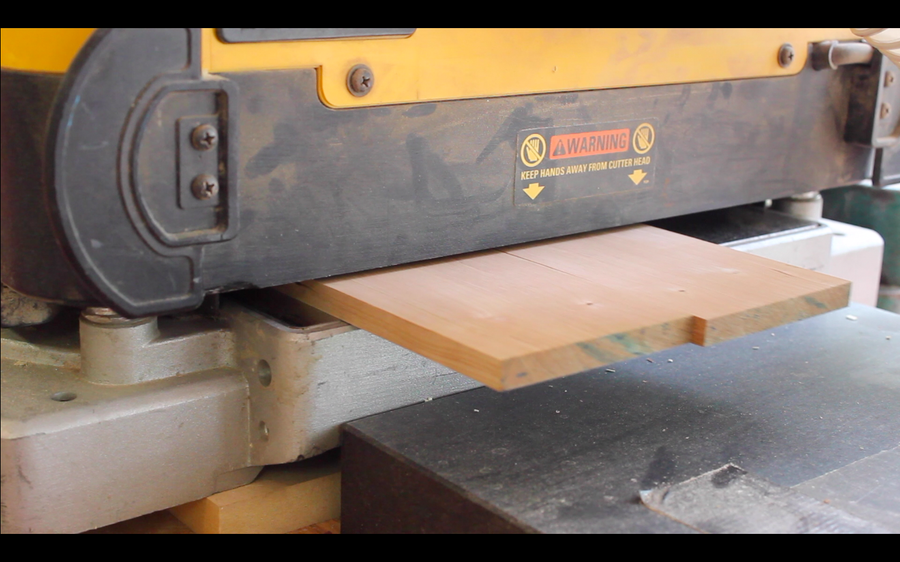 Here I planed down to final thickness of about 3/8". 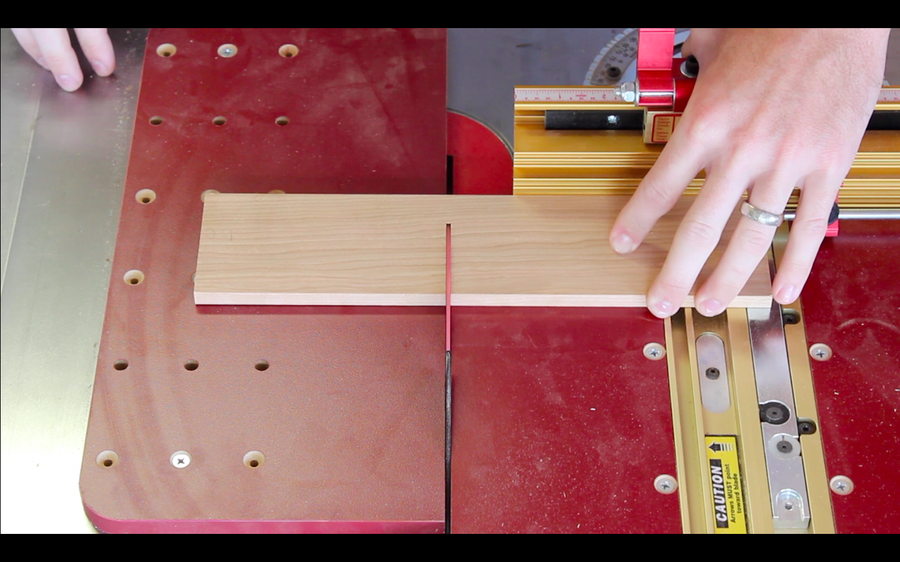 Cross-cutting to final length is an important step if you want a nice grain match around each corner. This picture is actually a shot of the top or bottom being cut but the process was the same for each piece. 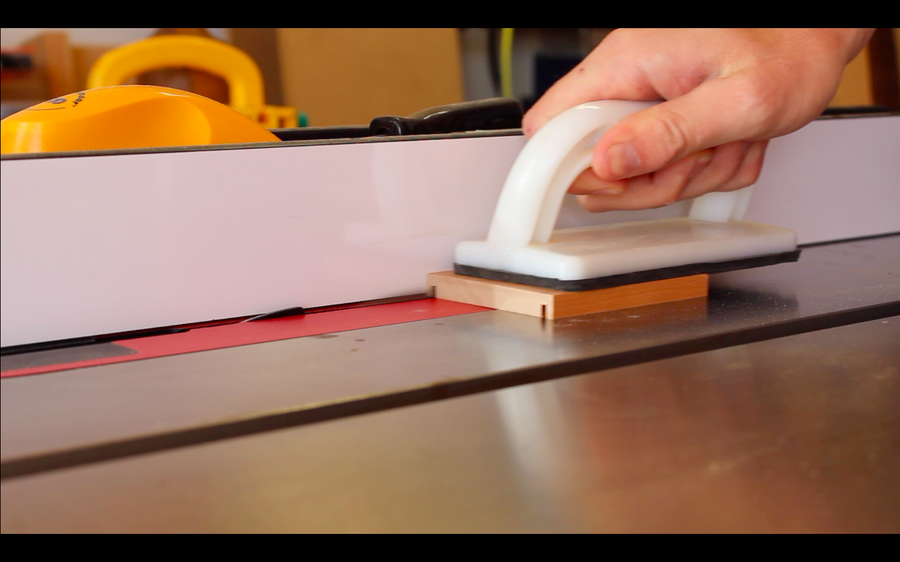 Each side received a groove to hold the top and bottom of the box. The groove was about 3/16" deep and an 1/8" in from the edge. 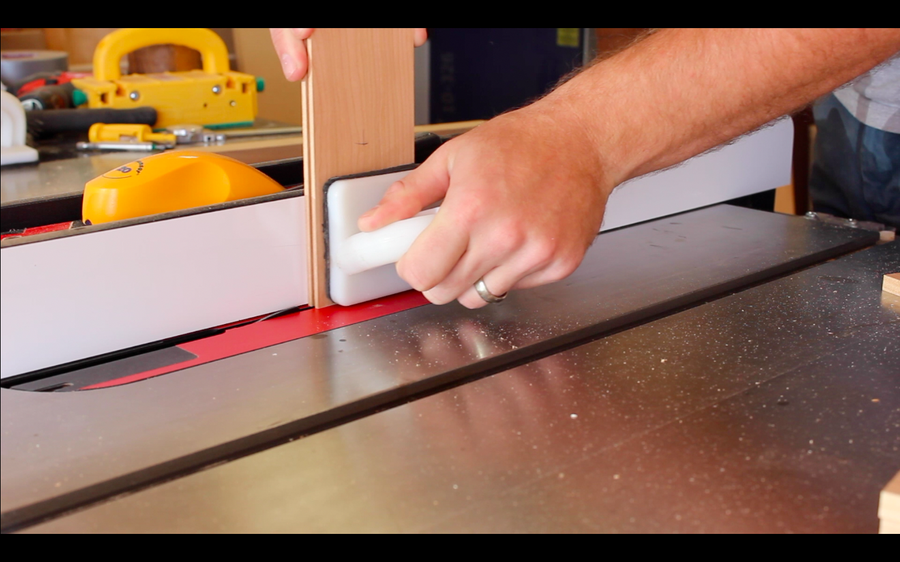 This is the lid of the box. It received a groove on each side. Since it's 3/8" thick, a 1/8" groove leaves 1/8" on either side. I didn't get footage of making the bottom. It's similar but has a rabbet around it's edges. This gives the box a slight 1/8" rise which produces a shadow that most of Kenney's boxes feature. 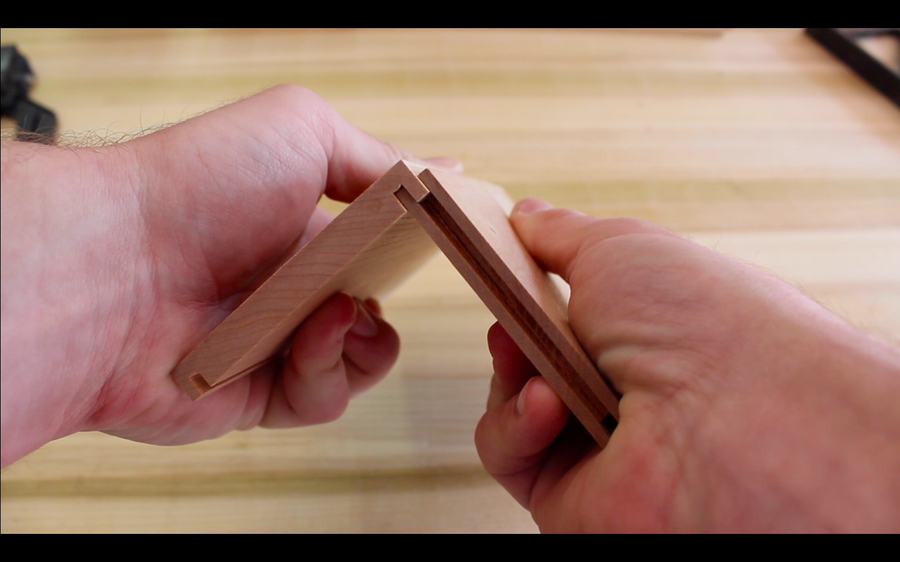 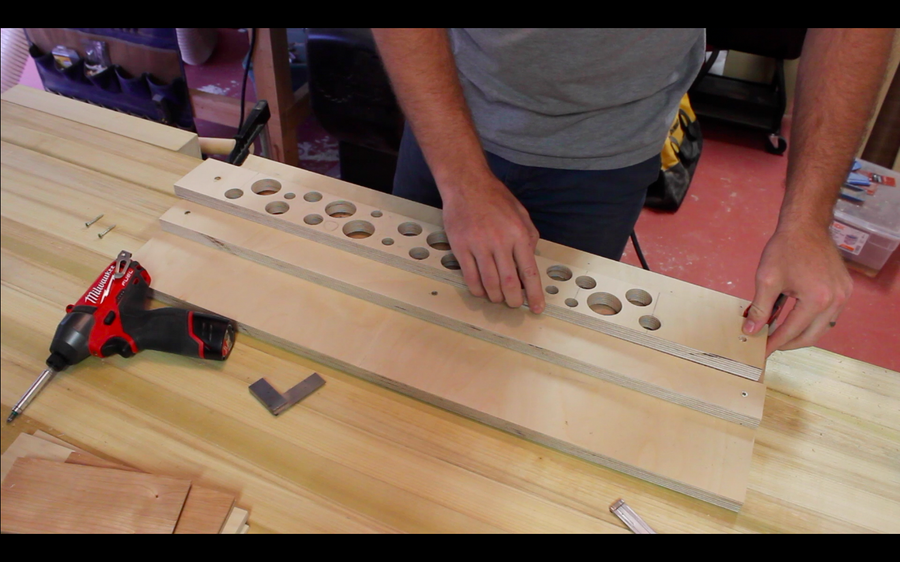 Now for the fun part of this box. I found some good information on Kenney's blog and instagram. He gave enough information for me to figure this jig out. The 4 sides of the box sit inside of the jig. The circle template sits on top of the pieces and is secured with screws. The one key for this to work is to make sure the circles on the far right and left match exactly because they are actually the same circle on the same corner of the box. 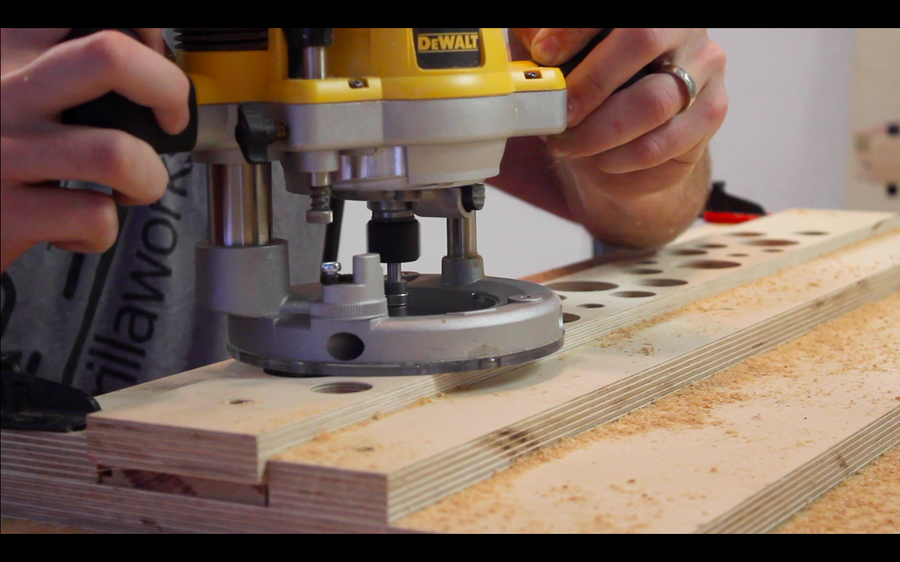 I used a 1/2" diameter dado clean out bit. It has a bearing that rides along the template. I went about 1/16" or so deep. One circle is 1/8" or 3/16" because of an error on my part but it isn't too noticeable. This was my favorite part of the build; it's a great technique and opens the door to a lot of other ideas. 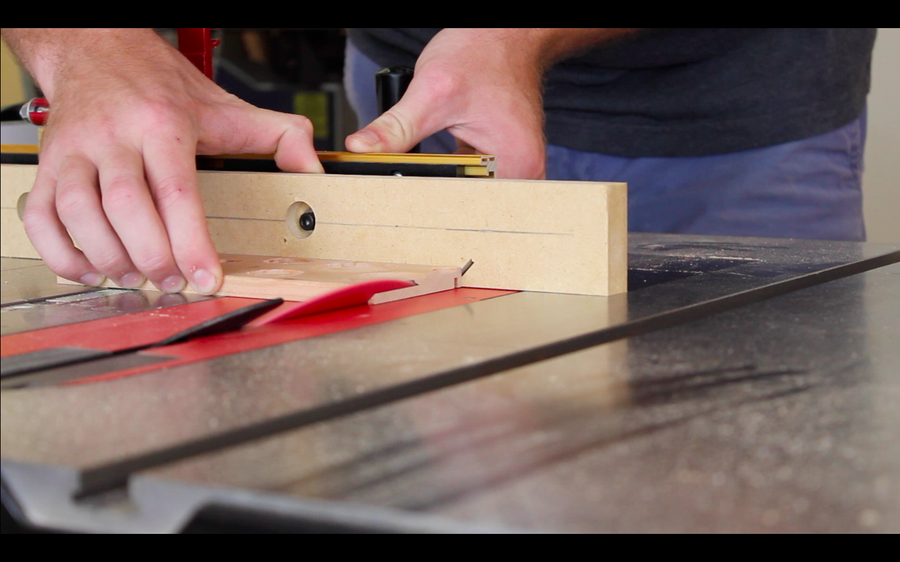 Because the circles are already routed and my pieces are already cut to final length, these miter cuts are really important. You don't want to remove any length or else the circles won't match up. All I did was sneak up on the cut using the kerf in my backer board as a guide. I did okay but will definitely do better next time I try this. 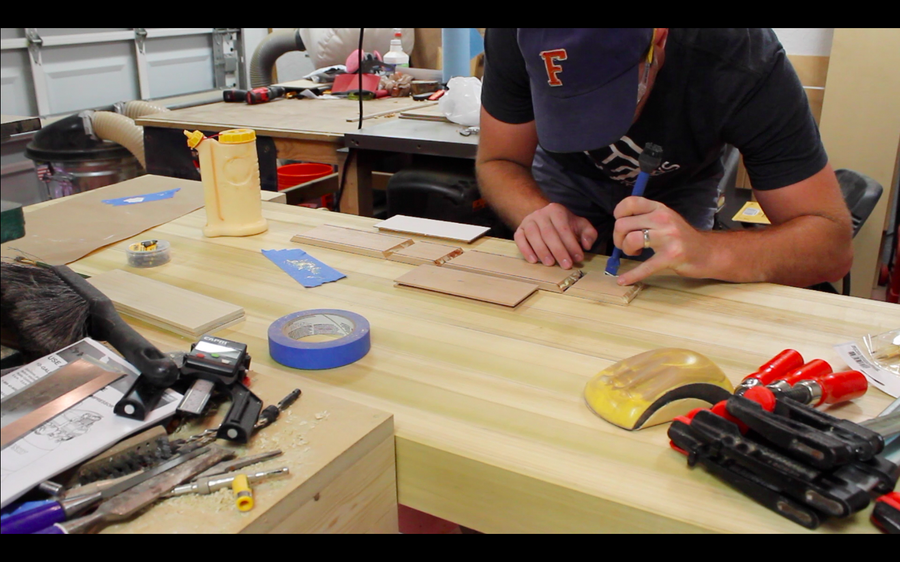 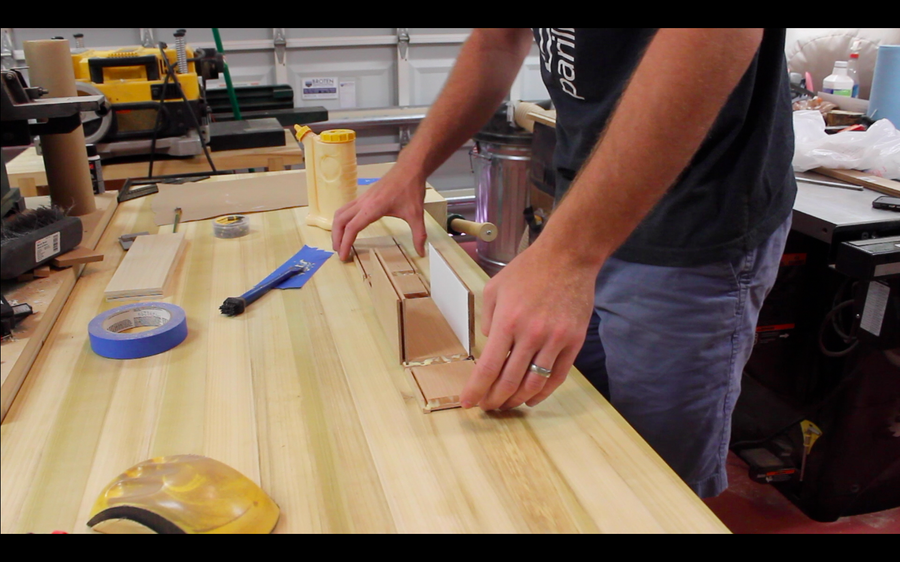 You can see how the top and bottom fit into the grooves. I painted the inside of the bottom before assembly while it was still easily accessible. 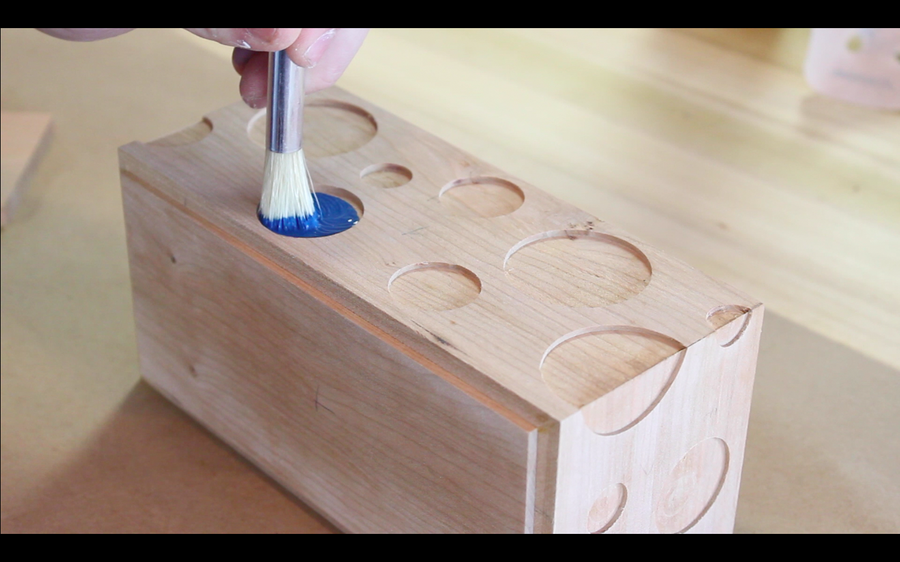 Time to paint the circles. Kenney uses milk paint on a lot of his boxes. I found some milk paint but not in the color I needed. I ended up using chalk (not chalkboard) paint. I wasn't concerned with being perfect here because I could always sand back any mistakes. 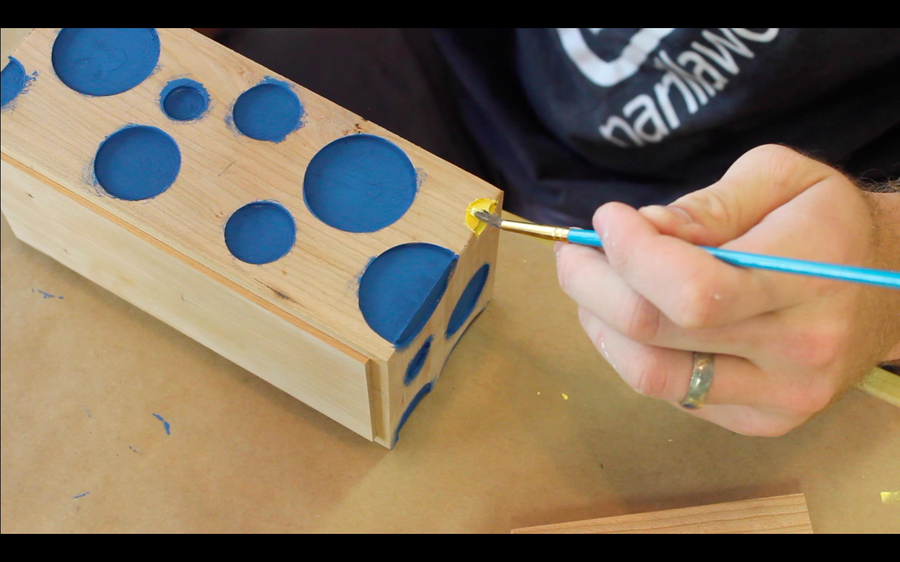 I decided to make one of the circles yellow. This was a deviation from Kenney's version. I did this because I like blue and my wife likes yellow; we always point out things that have that color combo and it's just a little touch to make it ours. 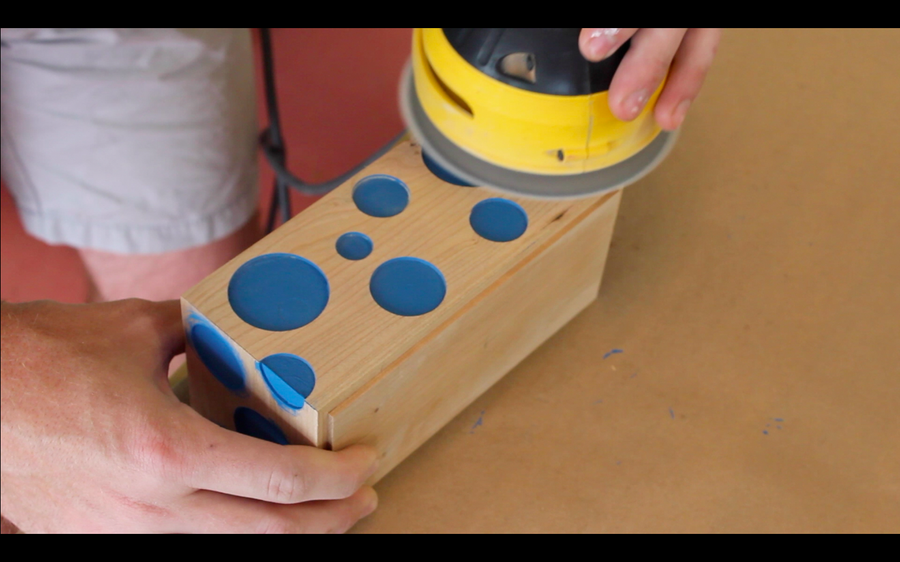 Sanding back the extra paint. This was 120 grit paper. I went very very light on this .You don't want to ease any of the edges or ruin any of the corners. 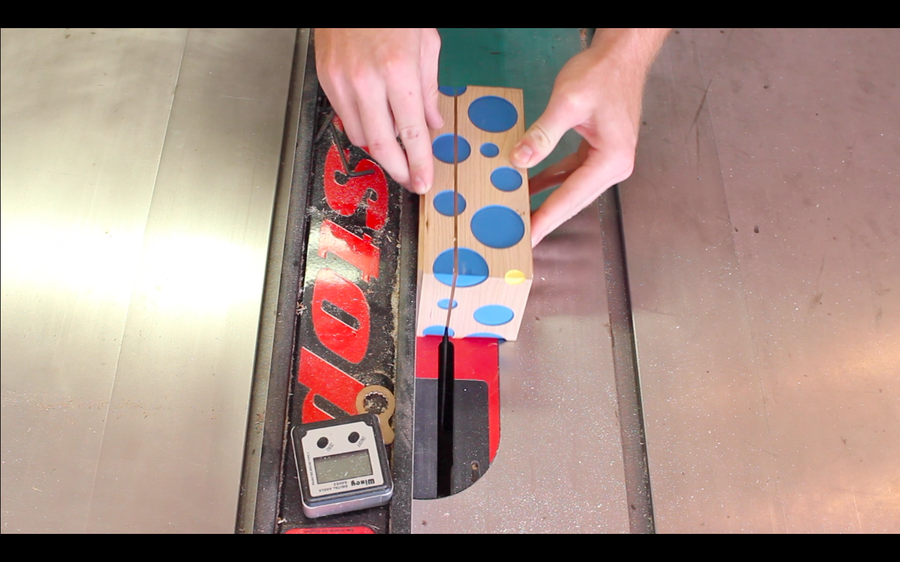 I separated the lid on the table saw. I got lucky that my cut didn't ruin any of the circles. By that I mean that all of the circles lined up in such a way that they bridged the gap the kerf left. Some clean up was done after this with a block plane. 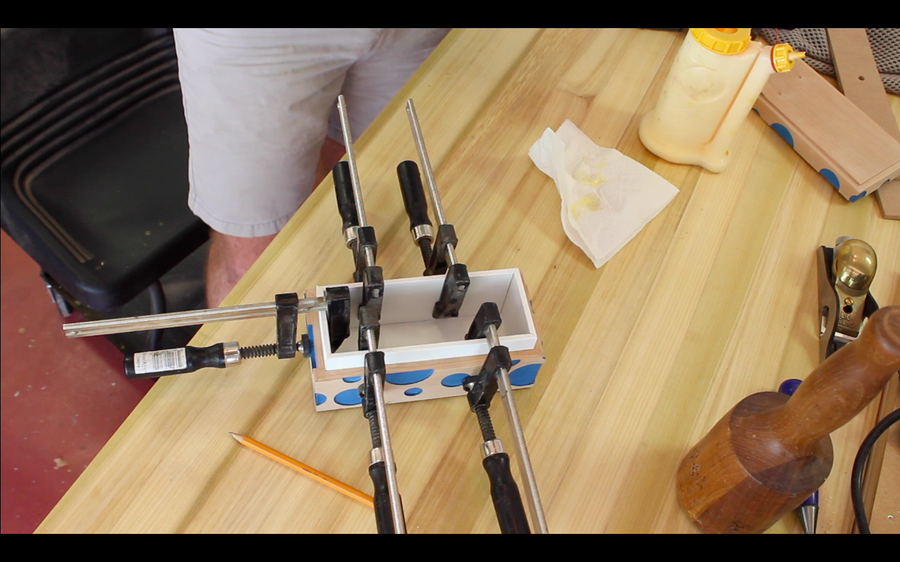 I used poplar for the liner and painted it white. At this point I realized Kenney's version has a much short liner yet he has the same 1/8" or so reveal. I'm guessing he has some liners in the lid as well. 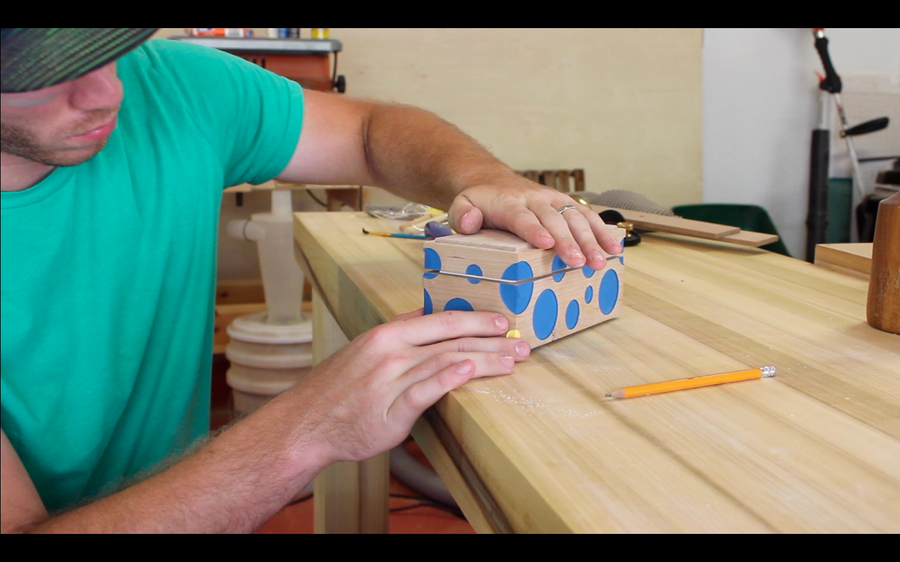 Getting the lid on for the first time. It was a little snug but after the shellac and coat of wax it slides on perfectly. The liner is very important because it dictates the reveal. This makes sure the circles still line up even though material was removed when separating the lid. 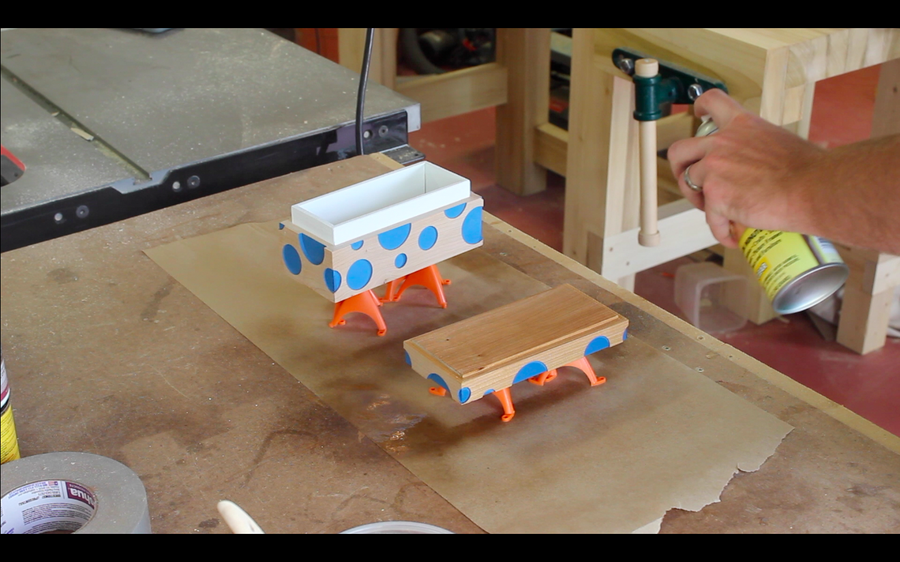 I sprayed a few coats of shellac, nothing fancy. A light coat of paste wax sealed it off and gives it a nice feel. 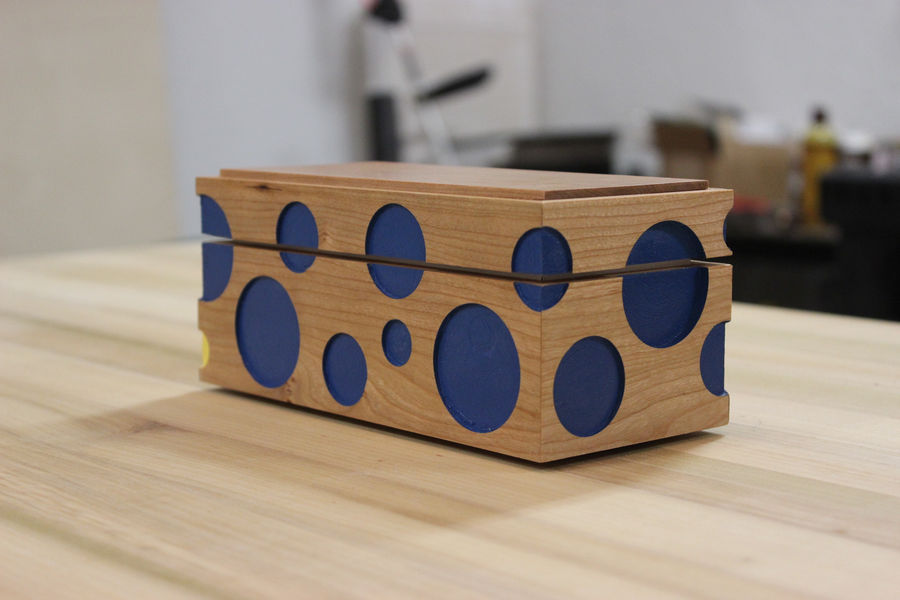 The final product. Looking back, I would pay more attention to how the circles work with the grain. Some run with it nicely but others intersect it and don't compliment it. This was a fun build and not too complicated. I need to improve my miter setup but that will come with time and practice.

Thanks for looking and reading. I look forward to seeing the other entries for this contest.