I was very excited to hear about this contest from a friend just as I was about to move! Despite that and all the fun of moving it has been a great adventure to work on replicating Box # 4 by Matt Kenney. This Box was made from a single board of Sapele as well as Macadamia Nut and Wyoming Nephrite Jade. It was quite an adventure. 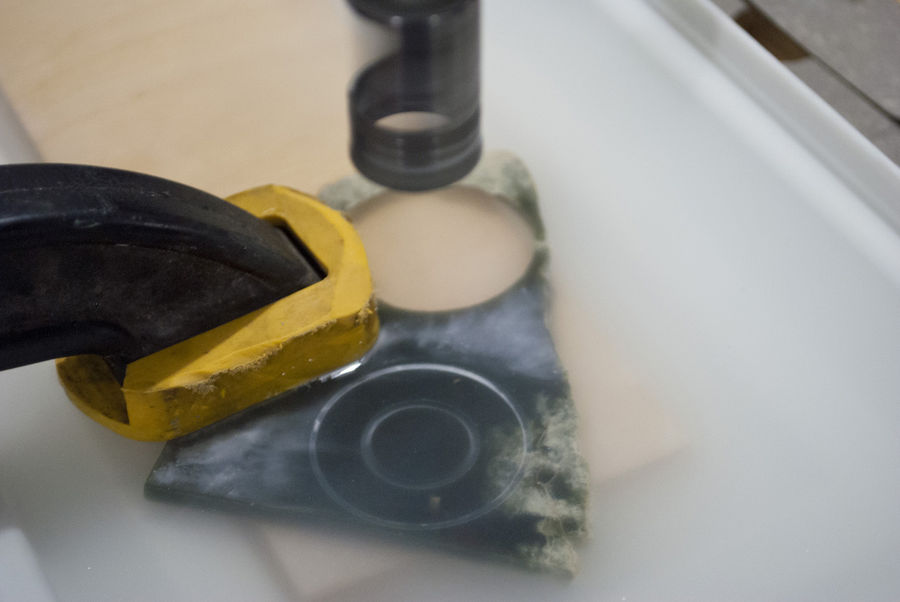 The start of this project began with choosing my material after hearing about the contest. I wanted to use up some material on hand and I decided to use some Macadamia Nut from Hawaii for the drawer fronts. To go along with the warm/dark colour of this wood I decided to use Sapele and I was lucky enough to find a perfect piece at a local Reimer Hardwoods store. For the drawer pulls I wanted to do something interesting, so I decided to use of Wyoming Nephrite Jade for the pulls. This is a wonderful Jade that has very cool pyrite inclusions but is dark but very translucent as well! Pictured here is drilling out the pulls. 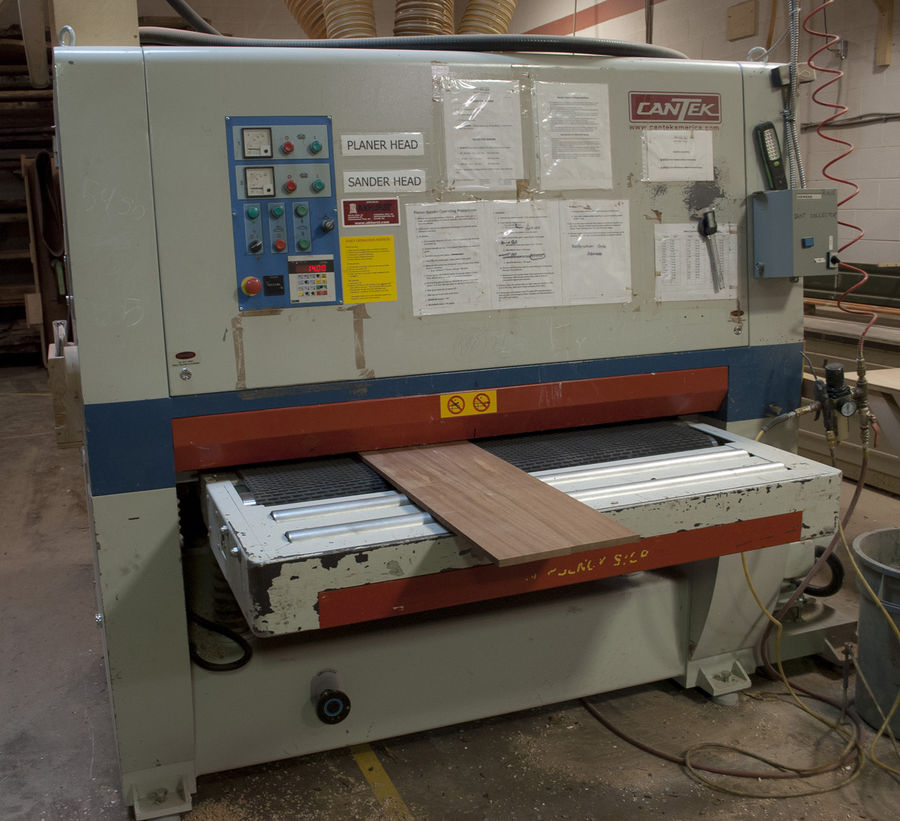 If you are going to overkill something at least do it with a 4' thicknesser. After resawing the Sapele and bookmatching it the boards were thicknessed and then crosscut to account for again match on the mitered edges. 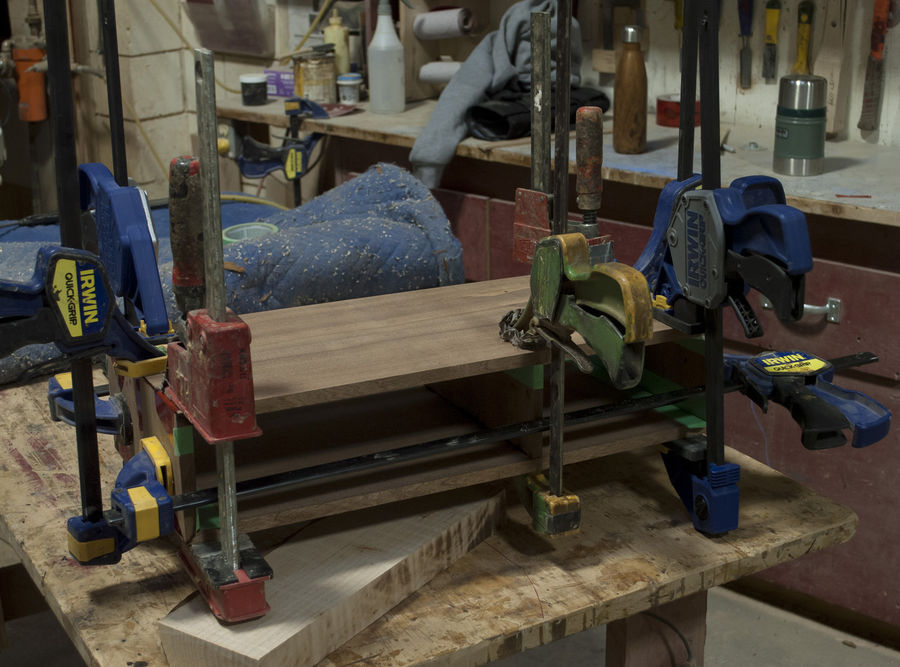 The glue up! It is true by how there can never be enough clamps! 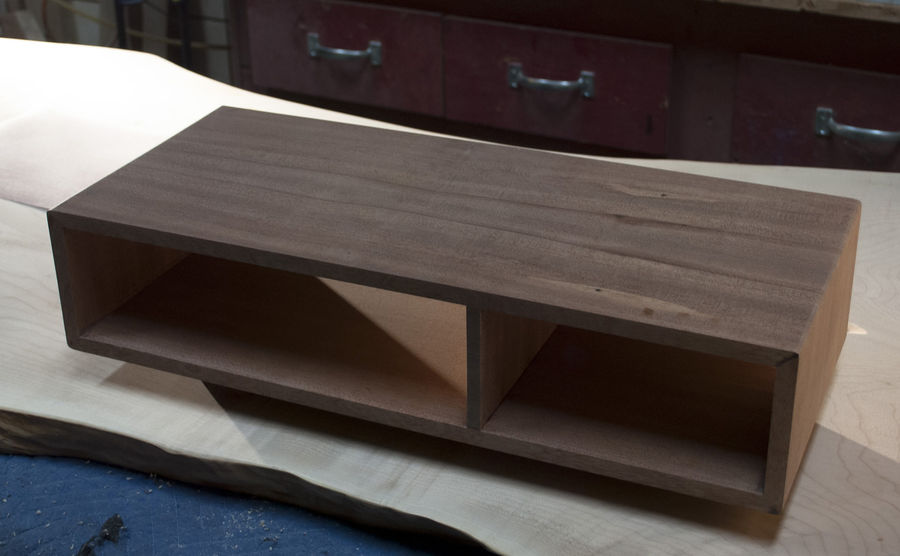 After the glue up. For the middle divider I wanted to go along with Matt's choice for a darker colour. Since I used Sapele and felt Ebony would be too much of a contrast I used a small strip of endgrain to give a darker colour to this piece. 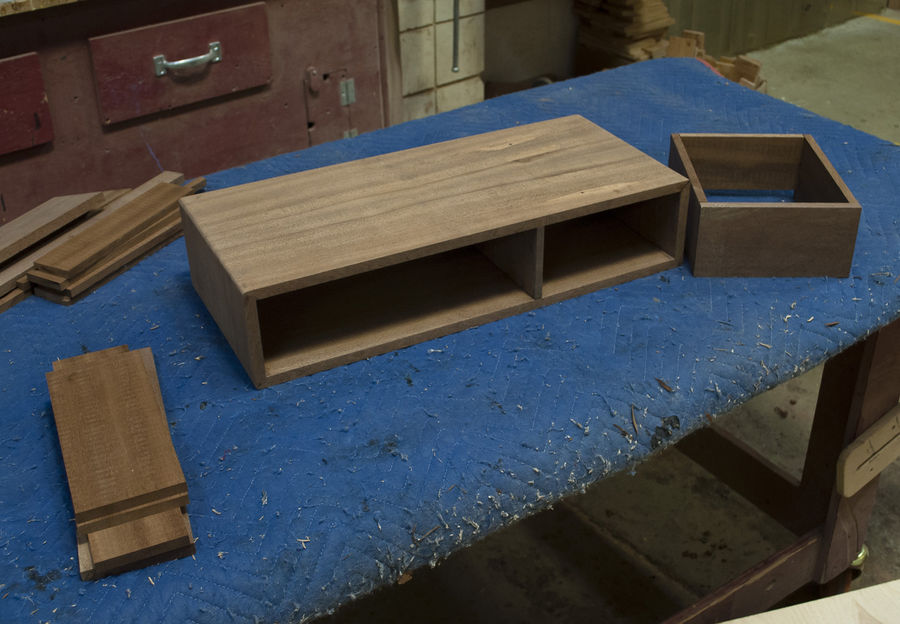 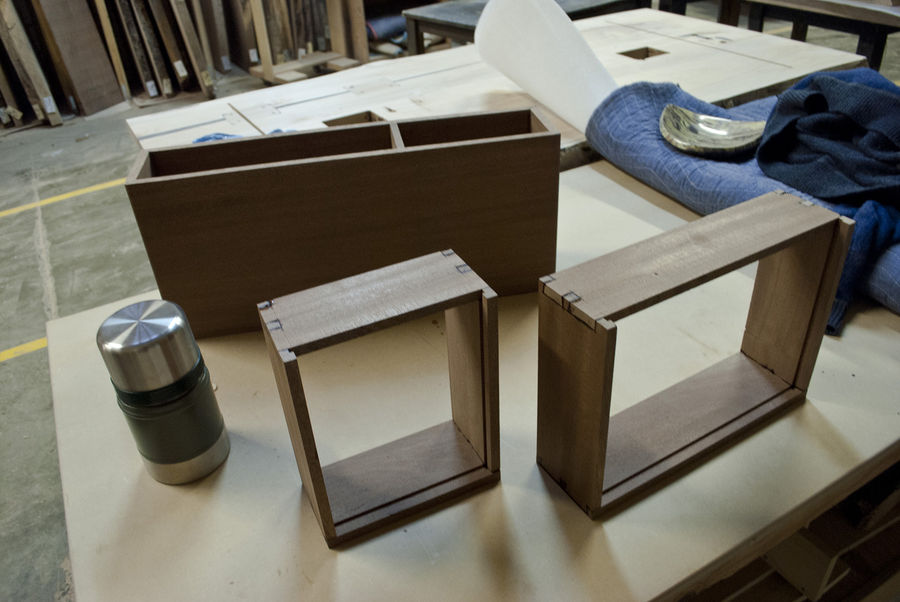 With the dovetails glued up for the drawers it was time to begin fitting the panels for the drawers as well as for the back of the case. These panels use sapele veneer. Fun fact about this veneer is that they traveled with me to the Faroe Islands where they became the panels for some boxes while I was in the North Atlantic for three months! It is nice to have worldly veneer...... 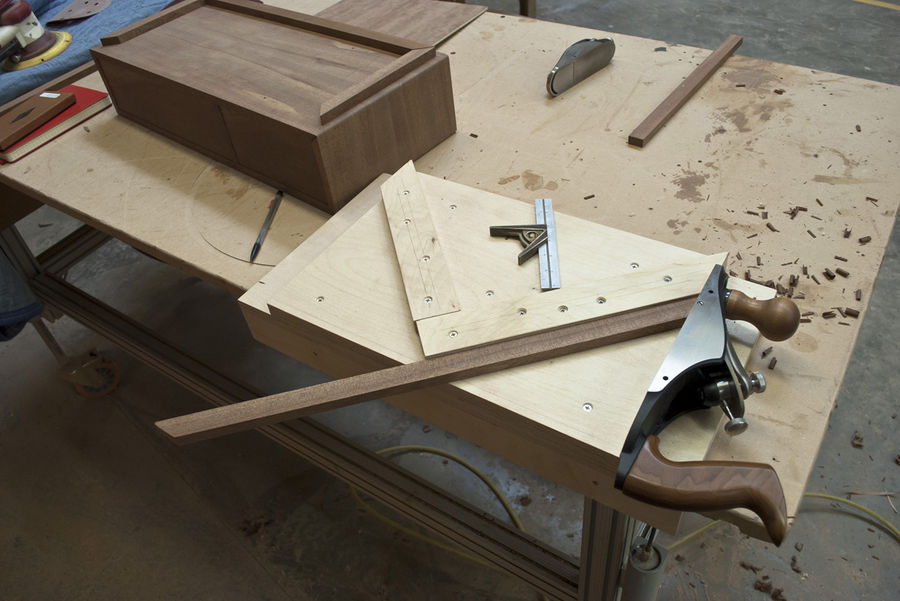 Once the drawers were fitted and panels fitting nicely the bottom riser was made with a shooting jig. 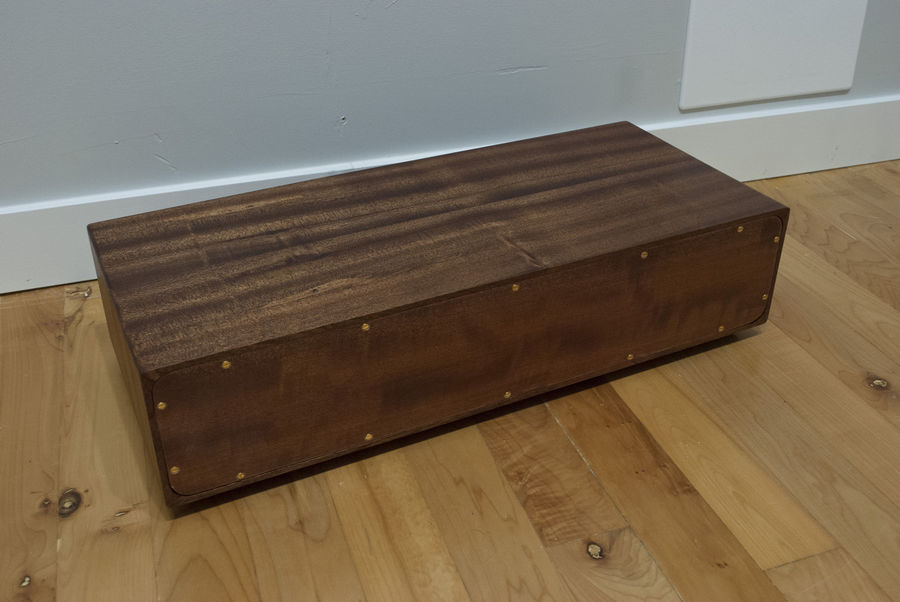 Now finished. This is the back panel. Small Brass screws were used for holding it in place to allow for the piston fit of the drawers. 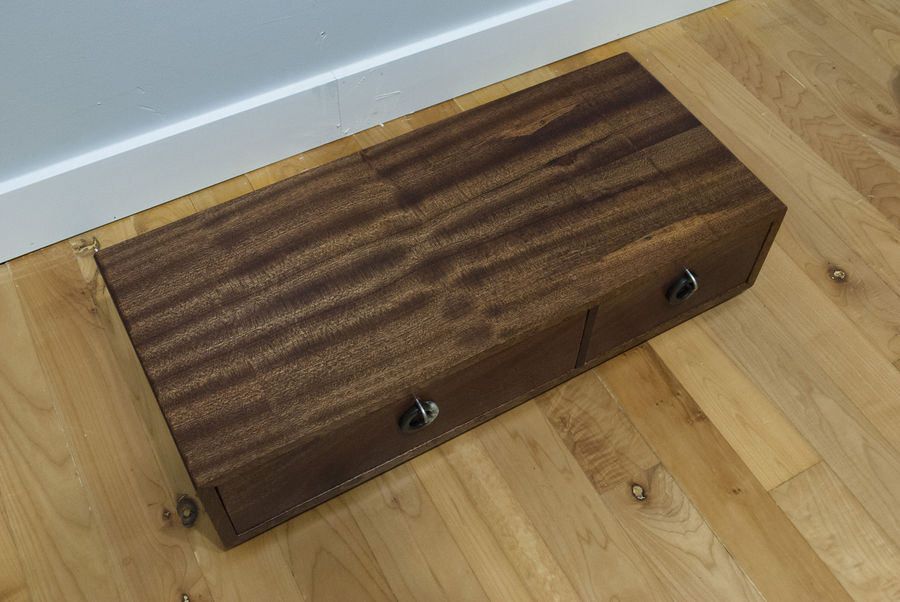 Showing off the bookmatch of the Sapele 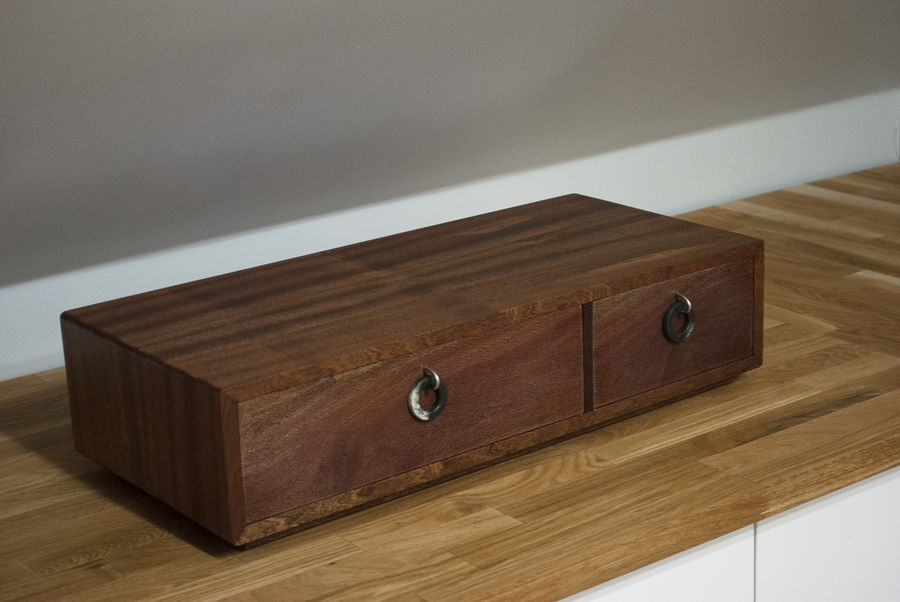 The finished box. It has been quite an adventure but I feel it is time to be done and also for it to hold my tea! The box was finished with an oil and wax finish. 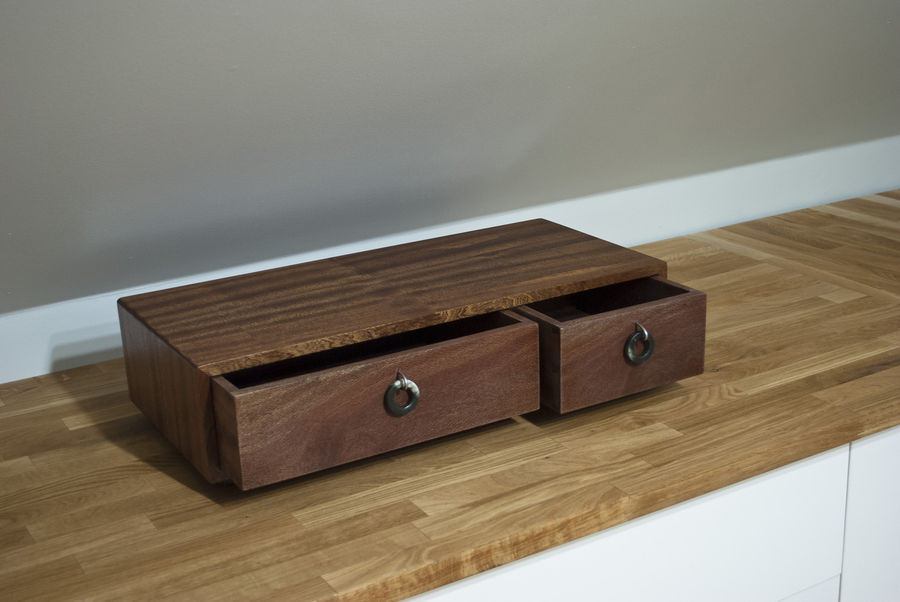 The finished box with the drawers open. 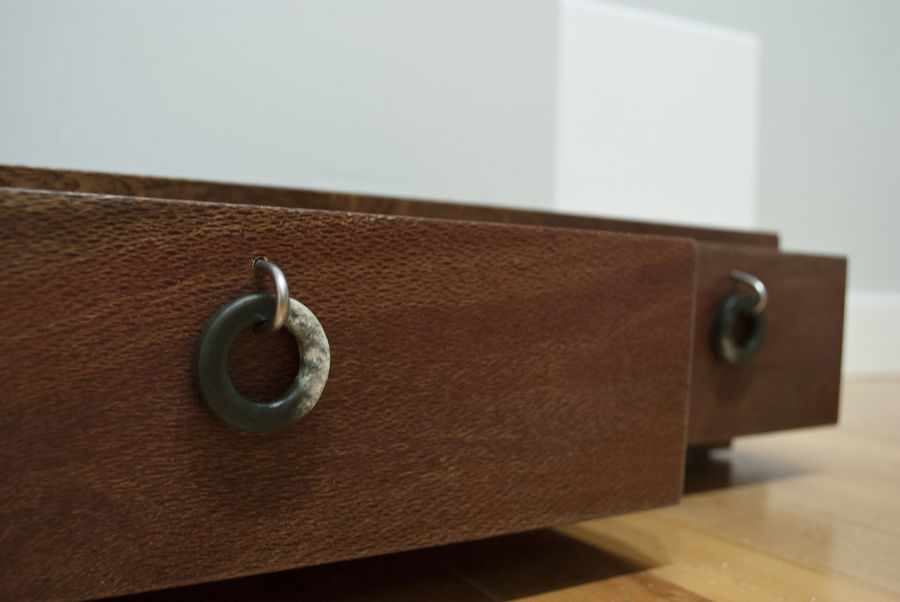 A detail of the Nephrite Jade pulls. The dark green is a lovely contrast with some very cool white rind on part of the stone.

Very nice work. I love the wood choices, the hardware and the finish.