After paying $120 a month for memberships to the rock climbing gym and getting fed up with the 30 minute drive to get there, I convinced my wife to let me build a rock wall in the backyard.  In total, the wood cost around $450 and is just a simple construction made from pine 2x6s and 3/4 inch plywood.  It took two weekends and was built in two parts: the side supports and the wall itself. 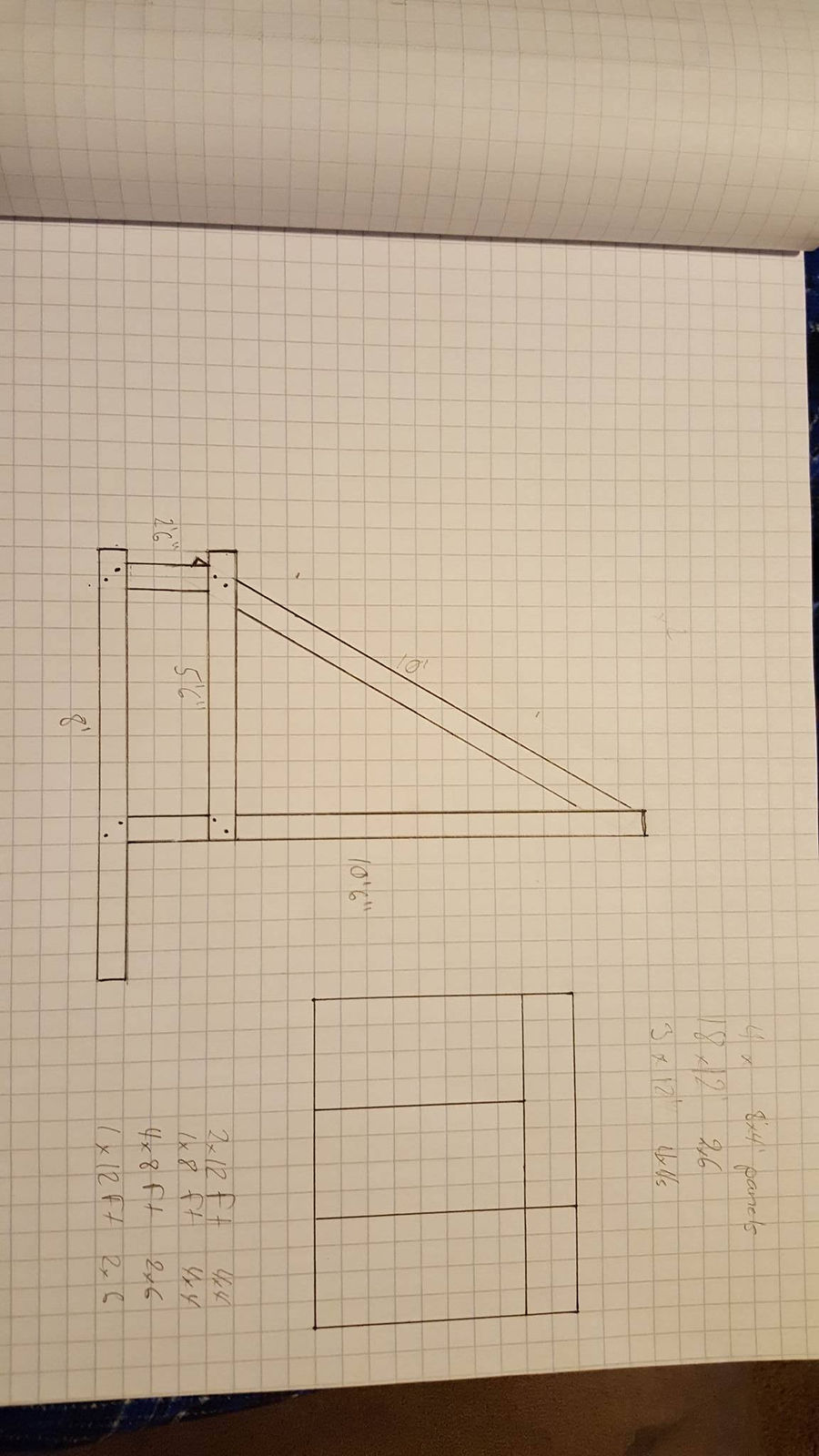 This is one of the original sketches for the wall depicting the side frame and how the plywood panels would be laid out on the wall. 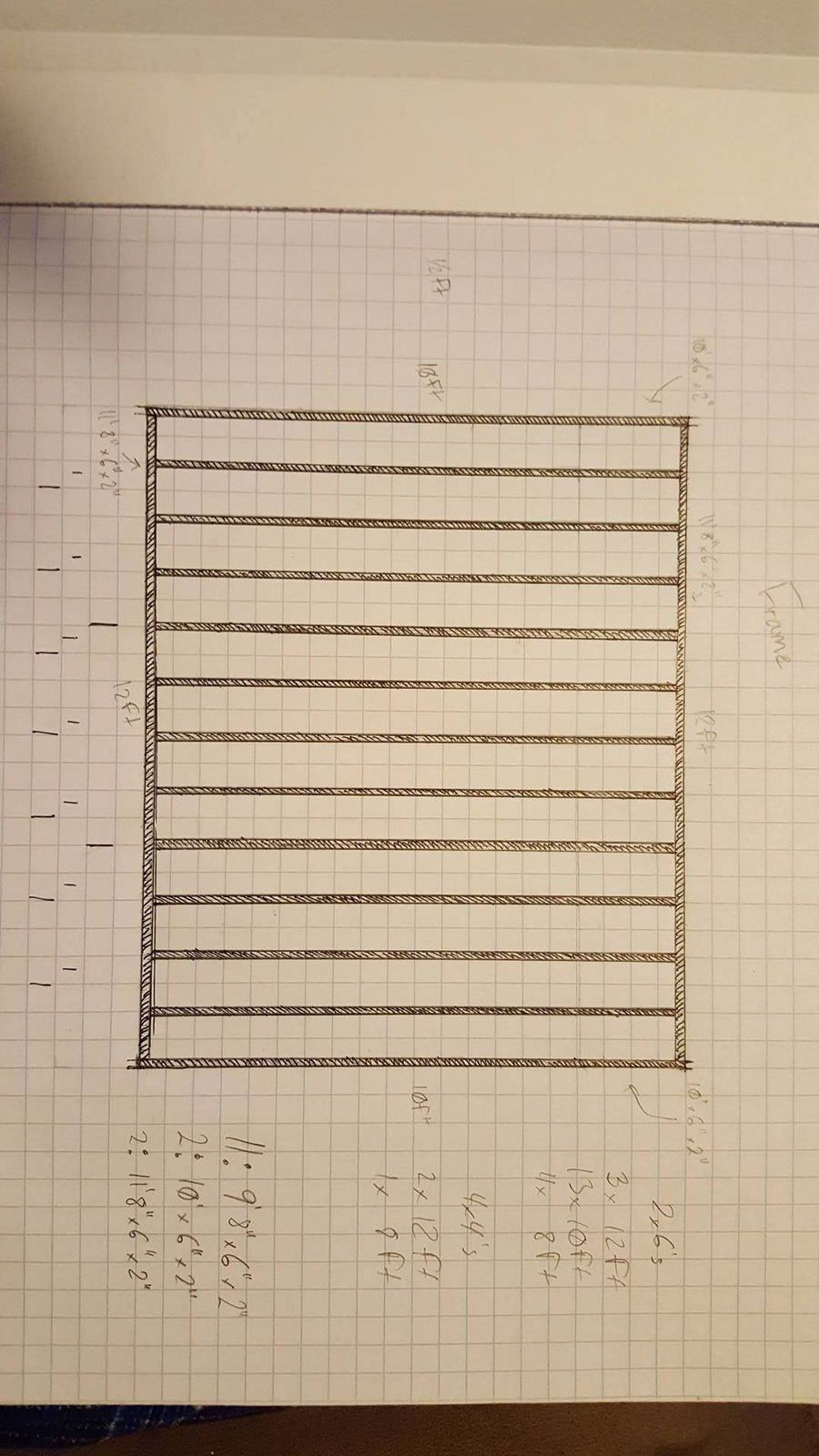 This is a sketch of how the frame of the wall would be constructed. 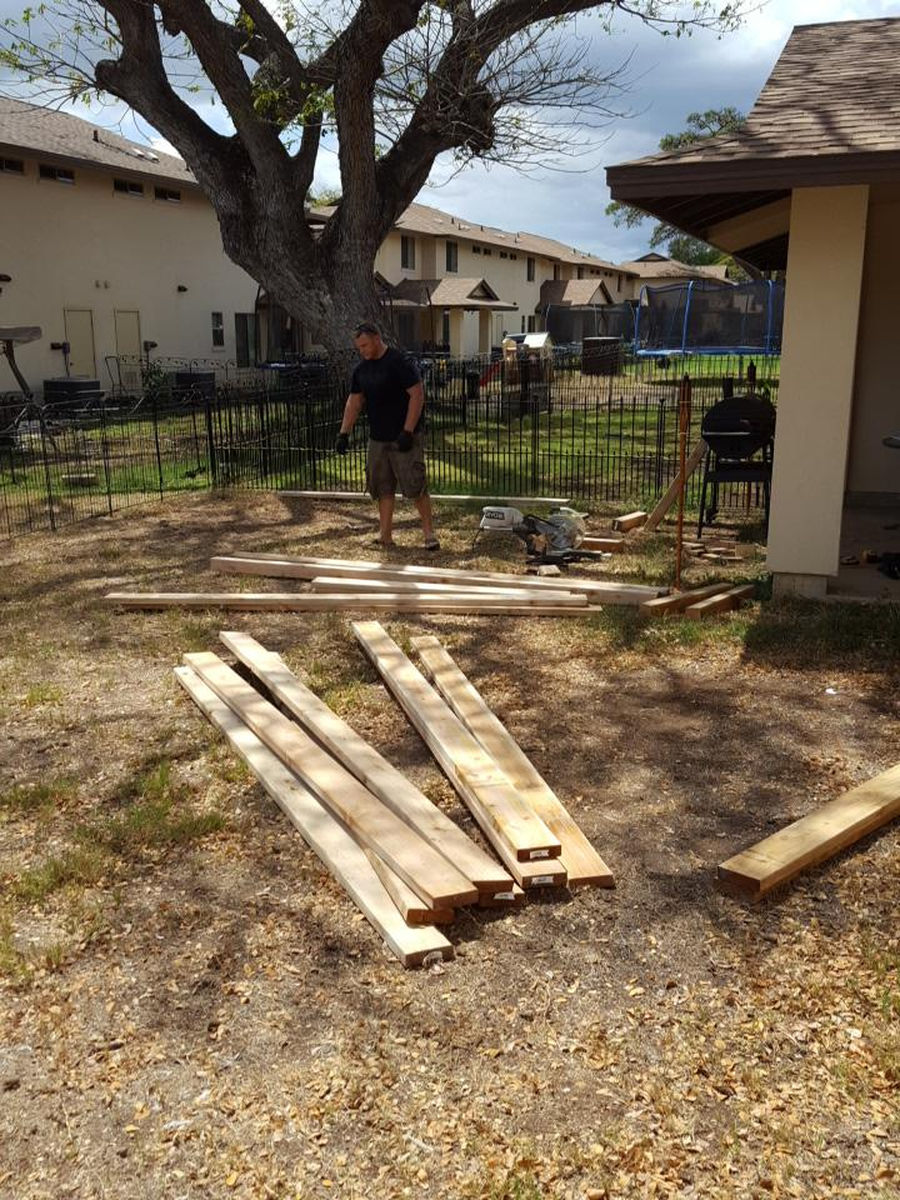 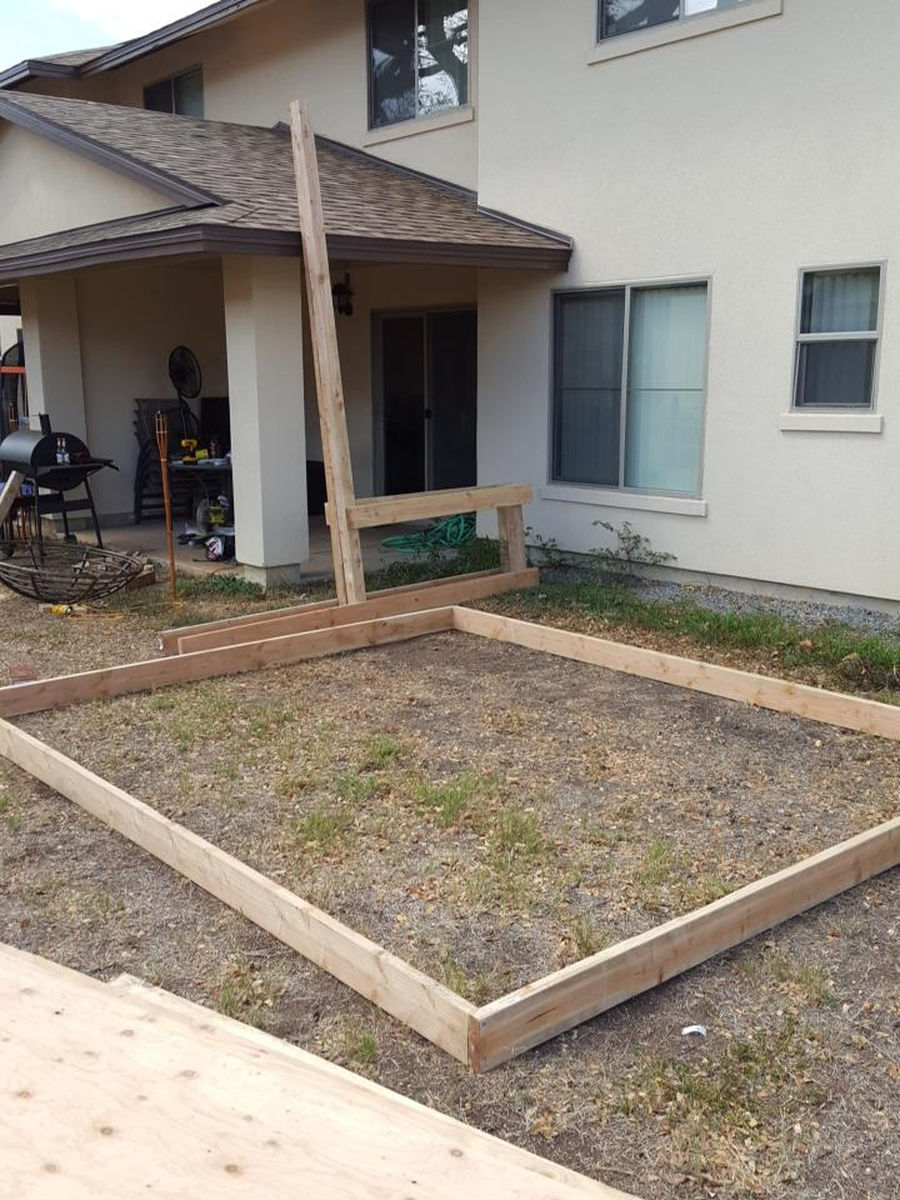 Once the wood was cut to length, we assembled the side frames.  These were constructed using a combination of 2x6 boards and 4x4 for the upright supports.  I live in military housing, so I had to comply with housing regulations which require any construction to be completely free standing (can't be dug into the ground or attached to buildings/trees).  This meant the two sides had to be able to fully support the weight of the wall.  You can also see in this image the start of the wall itself. 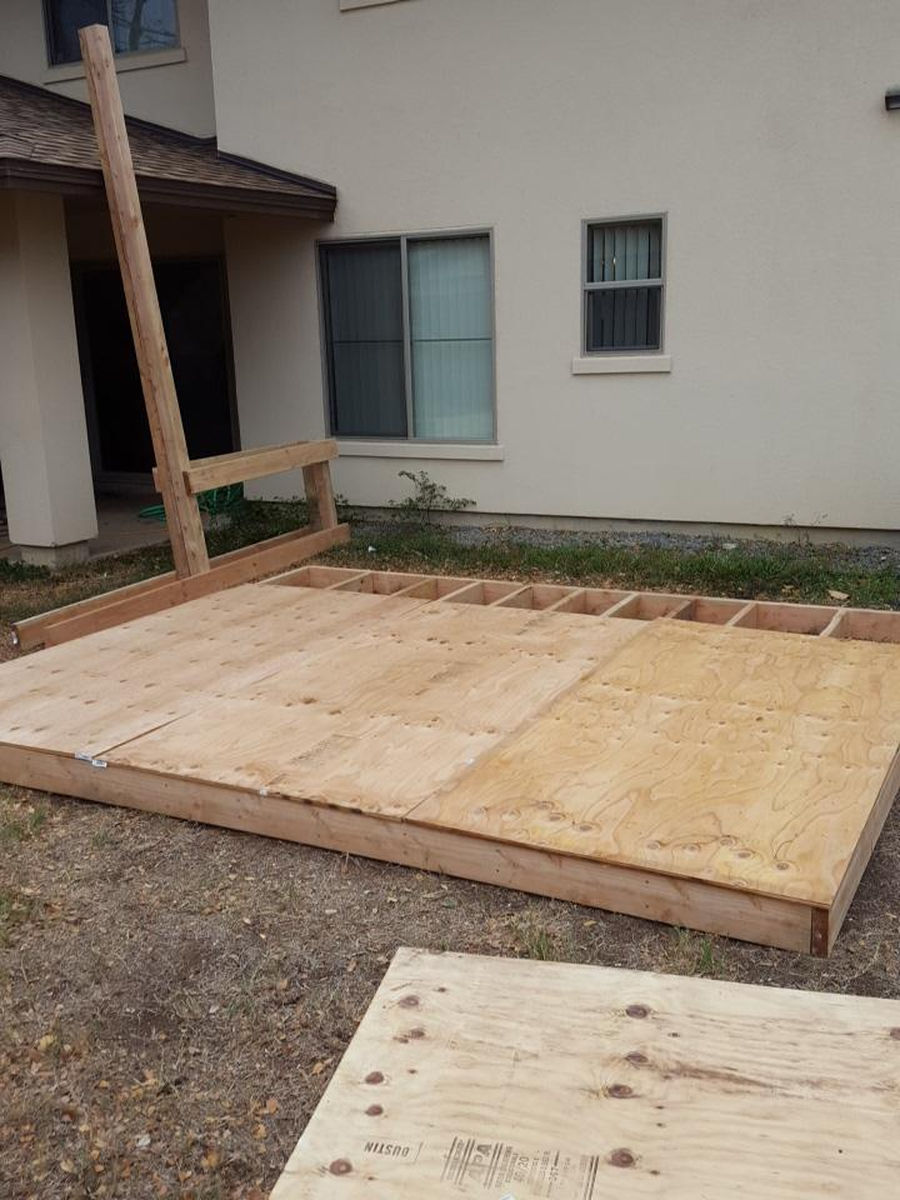 The construction of the wall was simple.  I used 9 2x6 boards across the back to provide support and so that I could fix the plywood sheets to the wall.  In this image, you can see the frame completed and the first three plywood panels attached.  In total, it required four sheets.  Three didn't need to be cut and were attached directly onto the wall as 4ft x 6ft panels. 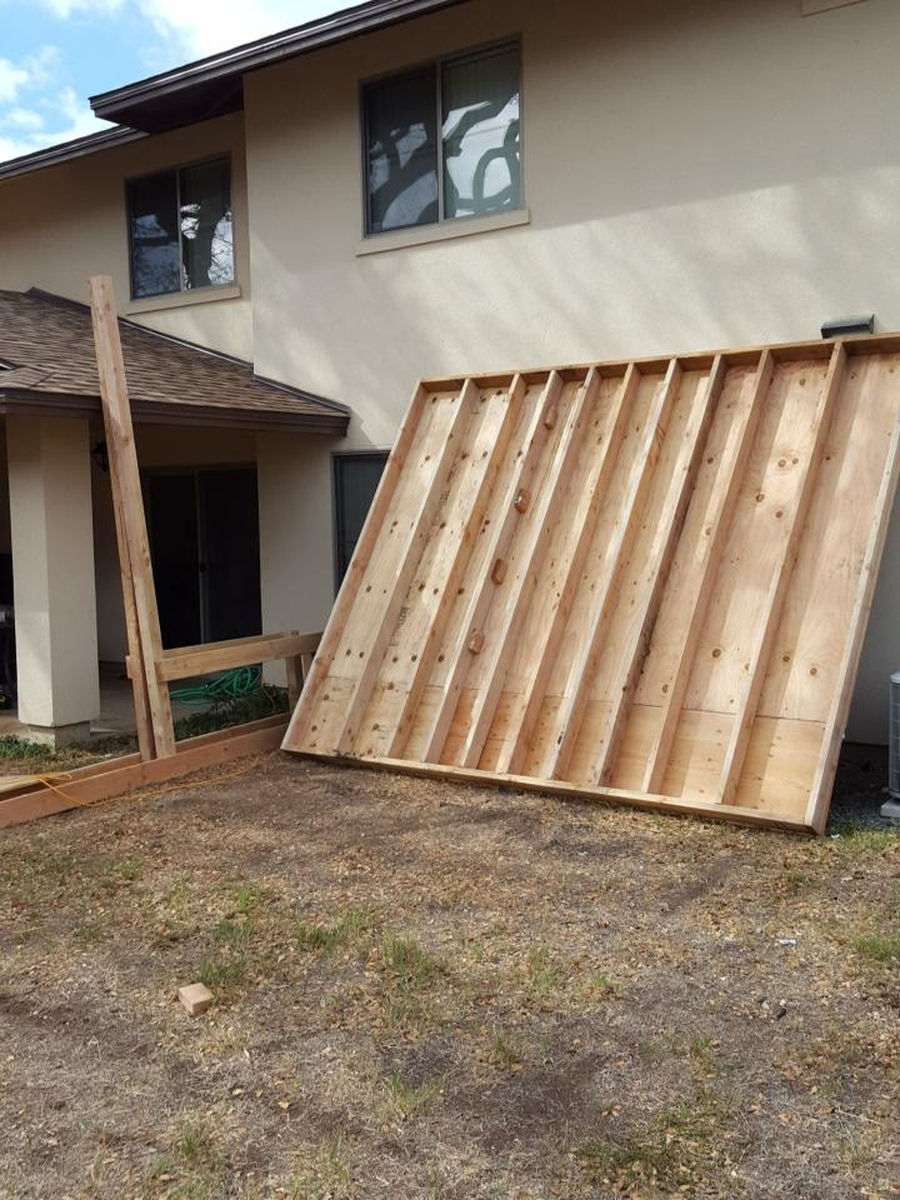 In this image, you can see the wall leaned up against the house and completed.  The last two panels were attached at the bottom.  One was cut to 2 ft x 8 ft and the other was cut to 2 ft x 4 ft so ensure the entire area of the 12ft x 10ft wall was covered.  This was where we stopped the first day. 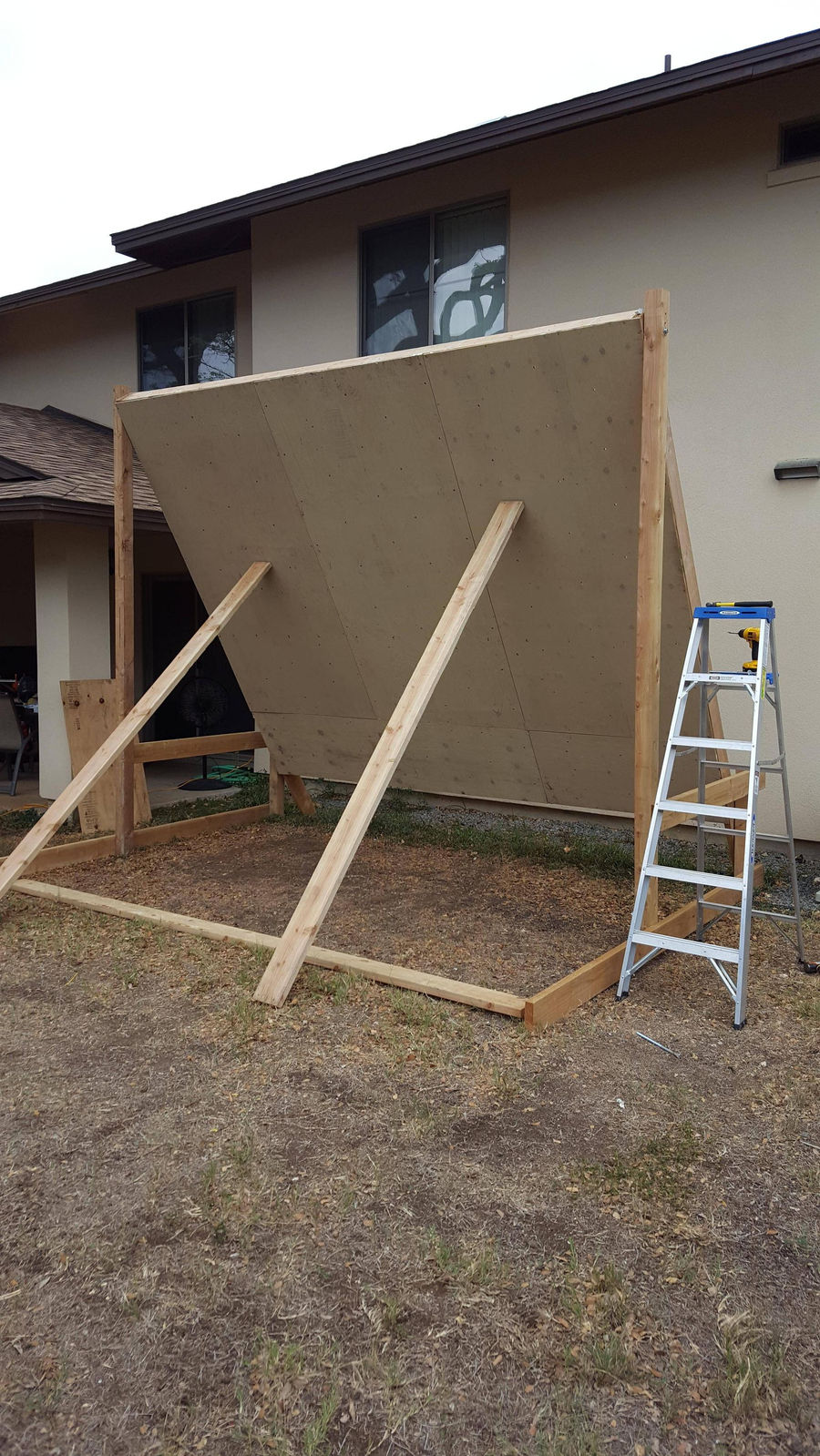 Over the course of the week, I applied about three coats of Behr waterproofer to increase the life of the wall as it is outside in the rainy, humid Hawaii weather.  Once it was time to assemble the wall I realized that in order to mount it, we would literally have to lift the 500+ pound wall onto the frame and hold it there while it was fastened.  That simply wasn't feasible.  I then removed the 10ft outside 2x6s and replaced them with 12ft 2x6s that were cut at a slant at the bottom so that I could lever the wall up onto the frame.  This made the mounted process simpler and distributed a good portion of the load away from the frame and onto the wall itself.  All in all, it took five people to get the wall in place.  My friend and I had to lift the wall itself while the right frame was moved into place by one person, a second person held the ladder while a third person slide 1/2 inch stainless steel bolts through pre-drilled holds to put the wall onto the frame, then we had to repeat that process for the other side.  In this image, you can see where we propped up the wall to take a breather and get the sides ready for be attached. 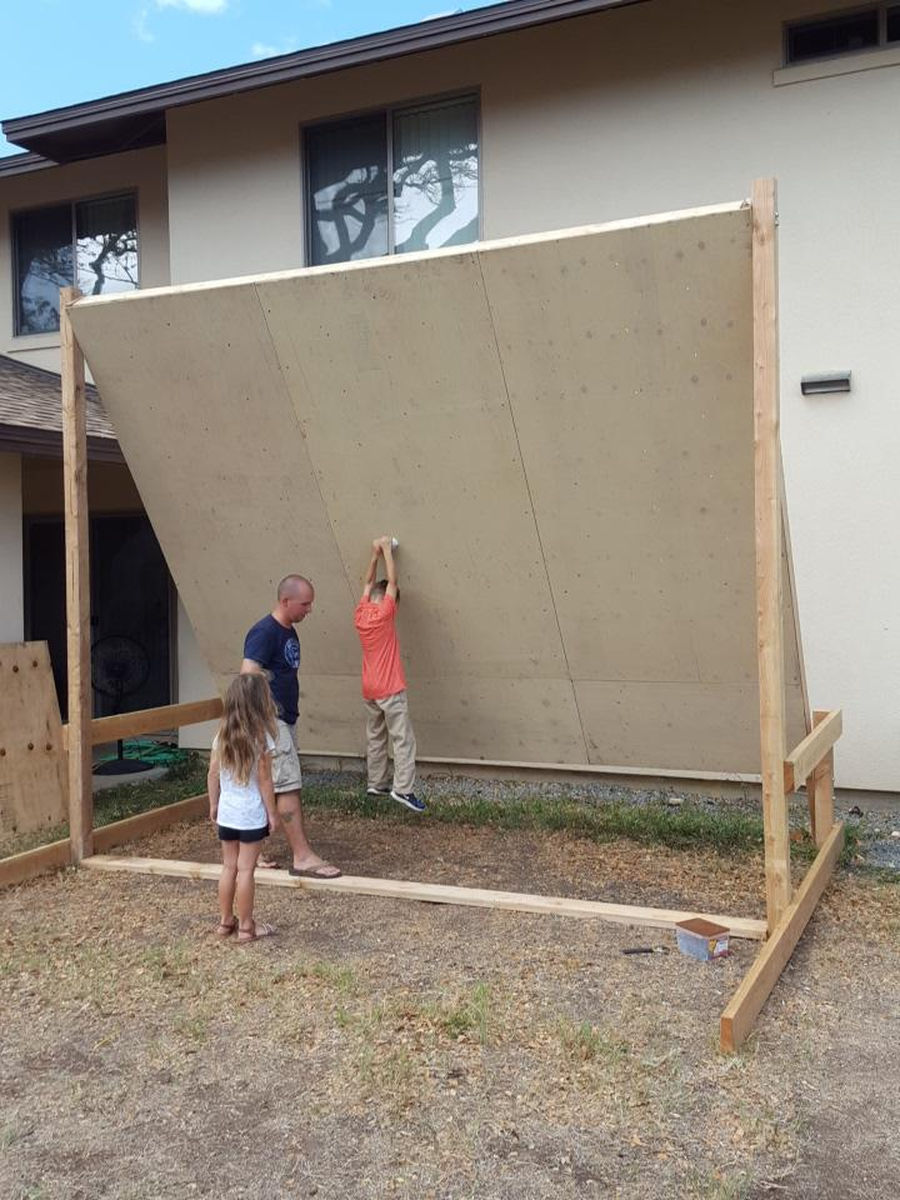 And here is the wall immediately after we got it all bolted together.  Total, there are eight 1/2 inch bolts mounting the wall onto the frame, two at the top of each side and two at the bottom of each side.  The 2x6 running across the ground was simply because I was concerned the sides might slide out from the bottom, so I fixed that to prevent it. 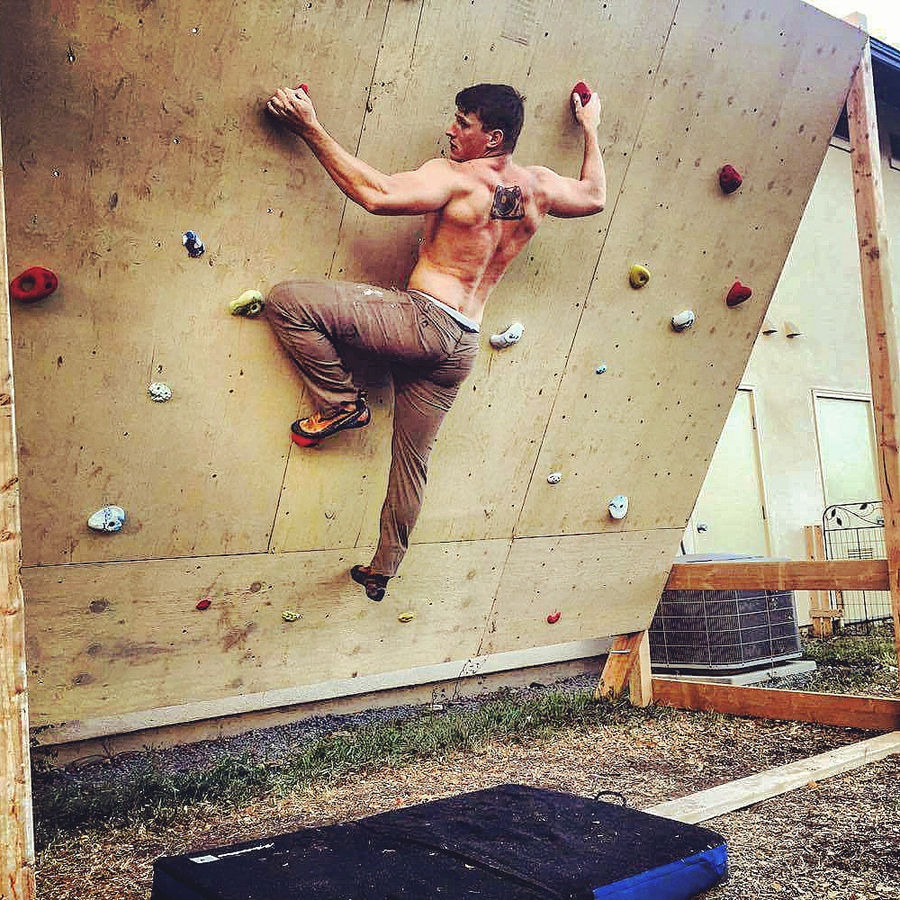 This is after we attached a few holds.  One of the first climbing sessions on the backyard rock wall.  This was entirely my own plan using only some pictures online for inspiration.  I originally looked for a plan to use, but I couldn't find one for a free-standing wall.