Last year I built a small ground based planter.  We planted radishes and the dogs dug up and ruined every single one.

This year I refused to be a victim of dog terrorism.   I decided to build a planter so high it would foil the dogs best attempets.  But then I was left with the question of "What do I do with all this dead space underneath?"... Fully realizing the irony I turned it into a dog house.

This combo planter was made from a few store bought 2x4s, and then a large amount of 1x4x24s, I bought an entire pallet of rejects for $20. 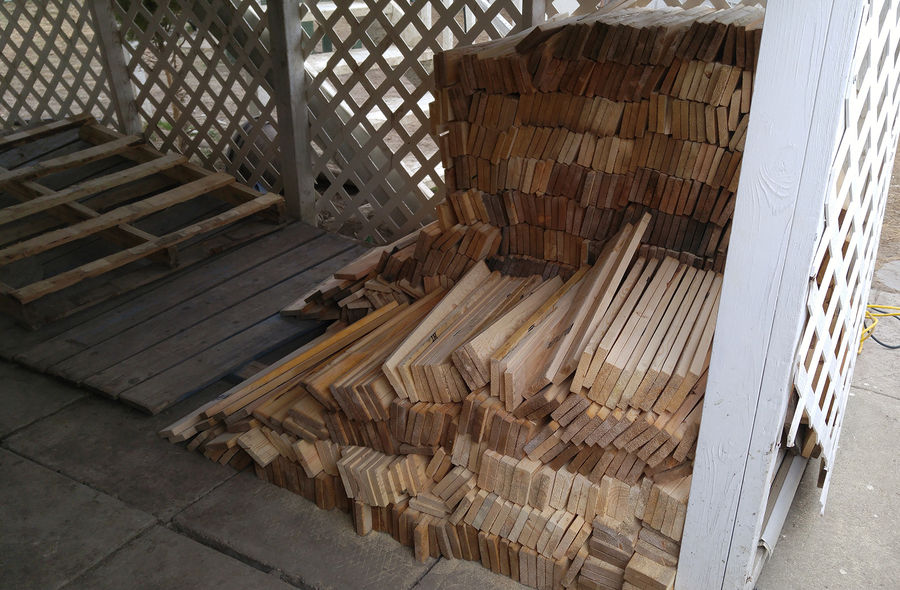 This is my giant pile of 1x4x24s I bought for $20.   Even with building this giant project, I only used about half of these boards.  A good chunk of them have also been added to the firewood pile.  These are "reject" boards after all. 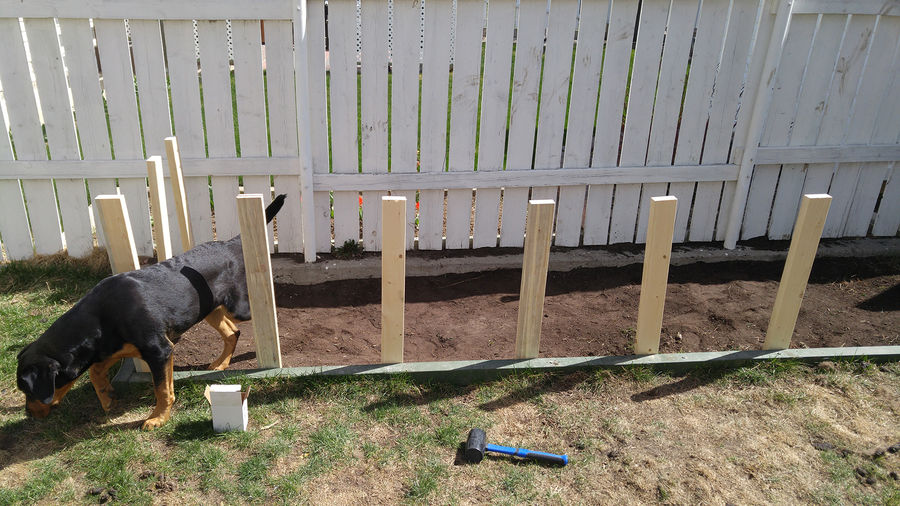 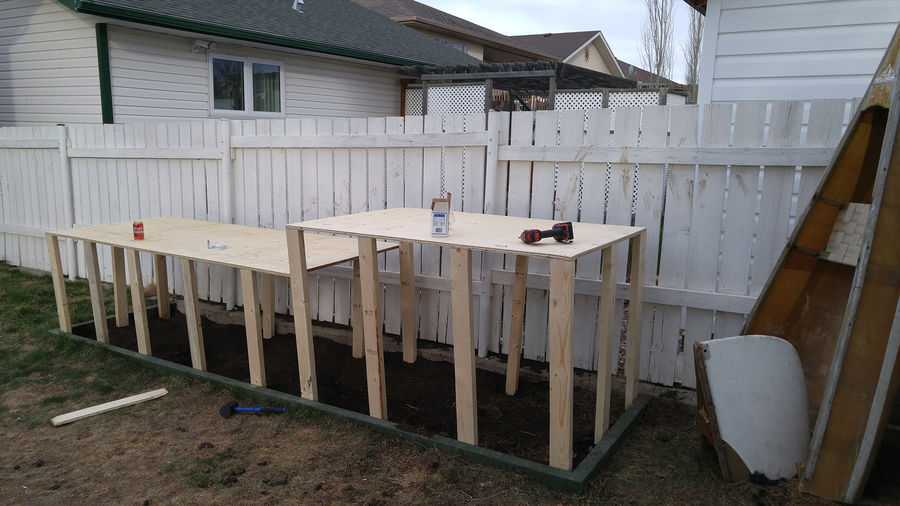 Plywood goes on top. Starting to realize maybe I'm making it a bit too tall... OH well.. No where to go but up now. 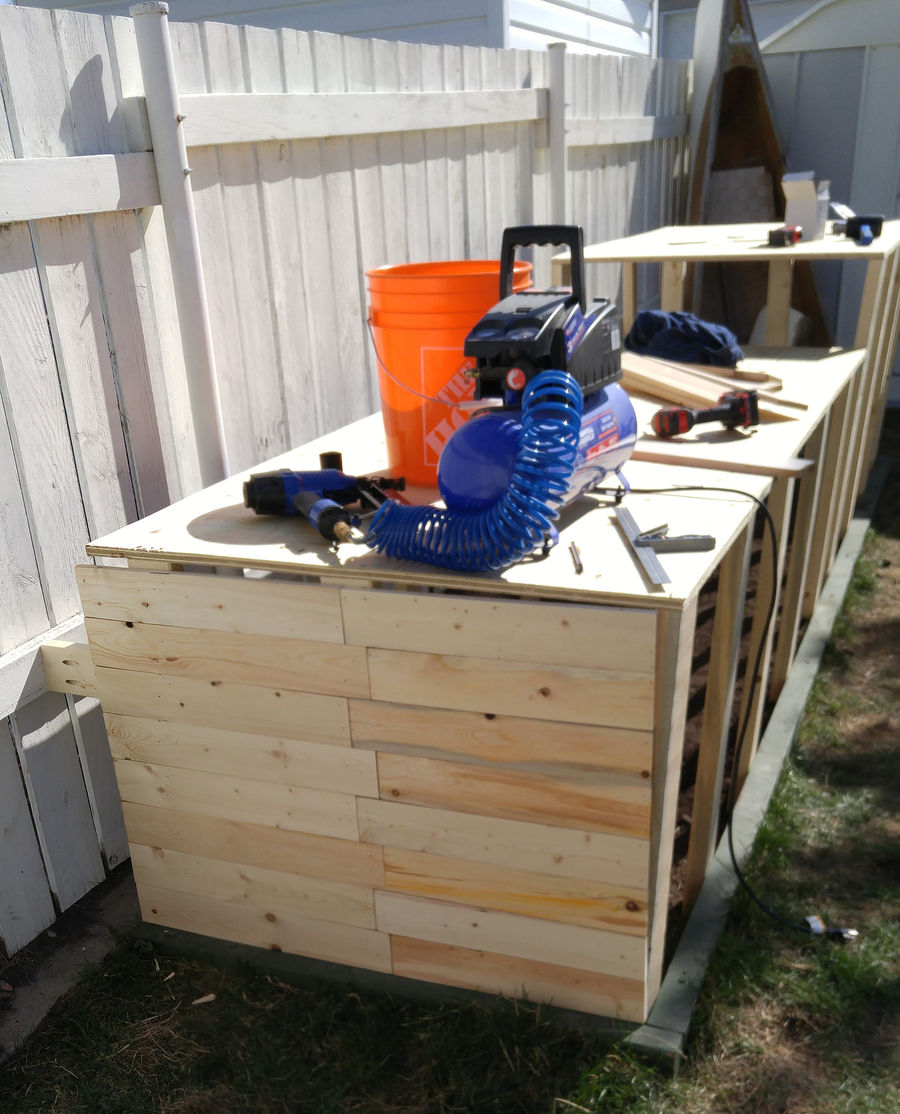 Using the 1x4x24s I start covering all the sides (except the back which has the fence).  This took ages. Had to plane each piece to make a nice face, then cut each piece to length.  I went through thousands of finish nails.  The air compressor never stopped running.

Starting to look like something here.  This is the moment I decided to use the dead space as a dog house and made the doors. 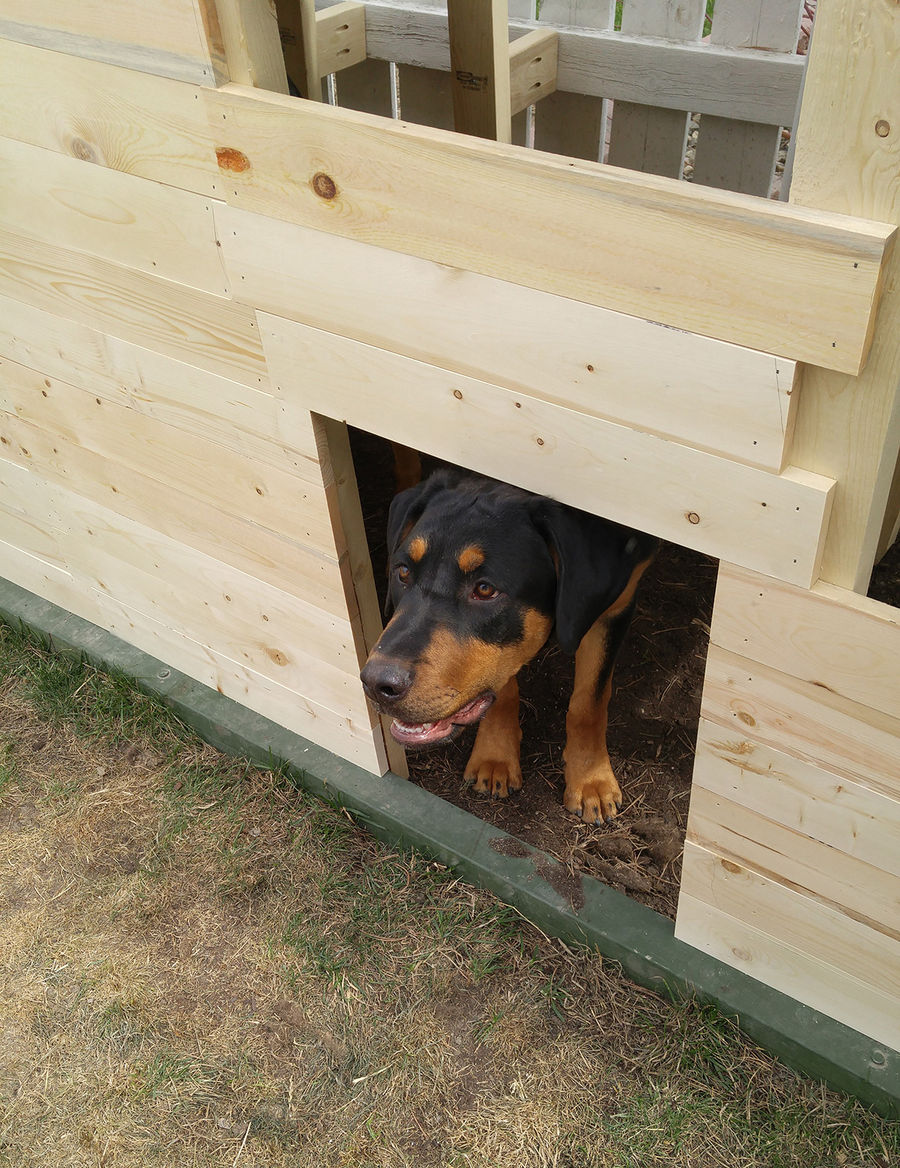 More progress, I don't want to even talk about how long this took... 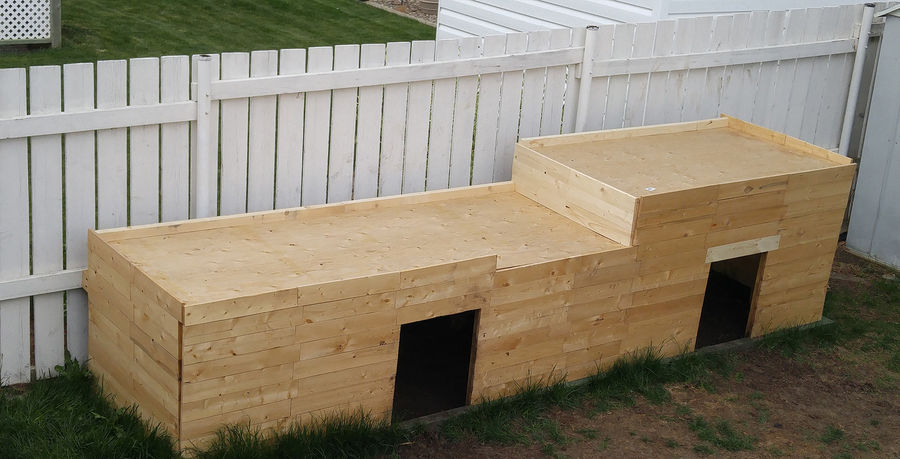 WHEW! Finally got all faces done... now to make the part that holds the soil and do it all over again. 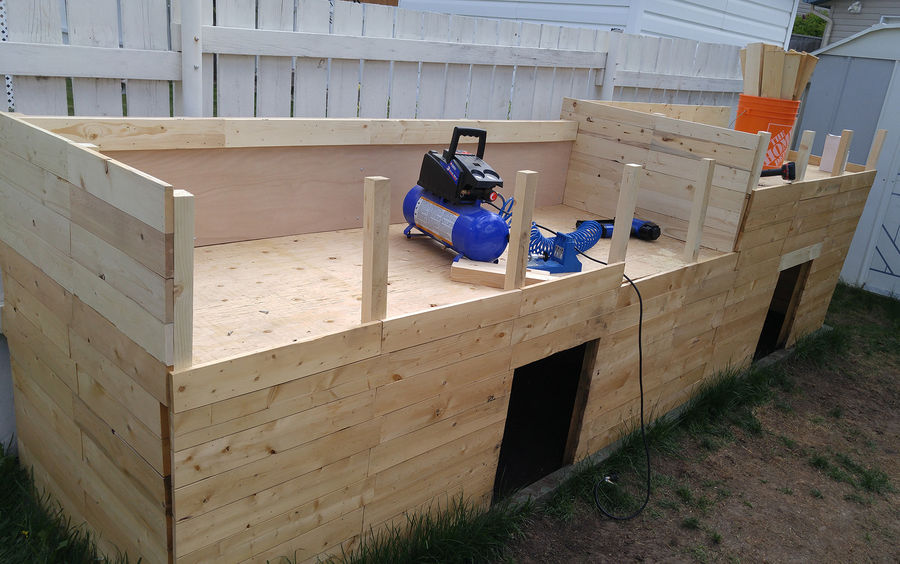 Used plywood for the back because it's not visible, and I wanted to save myself a few hours of nailing boards. 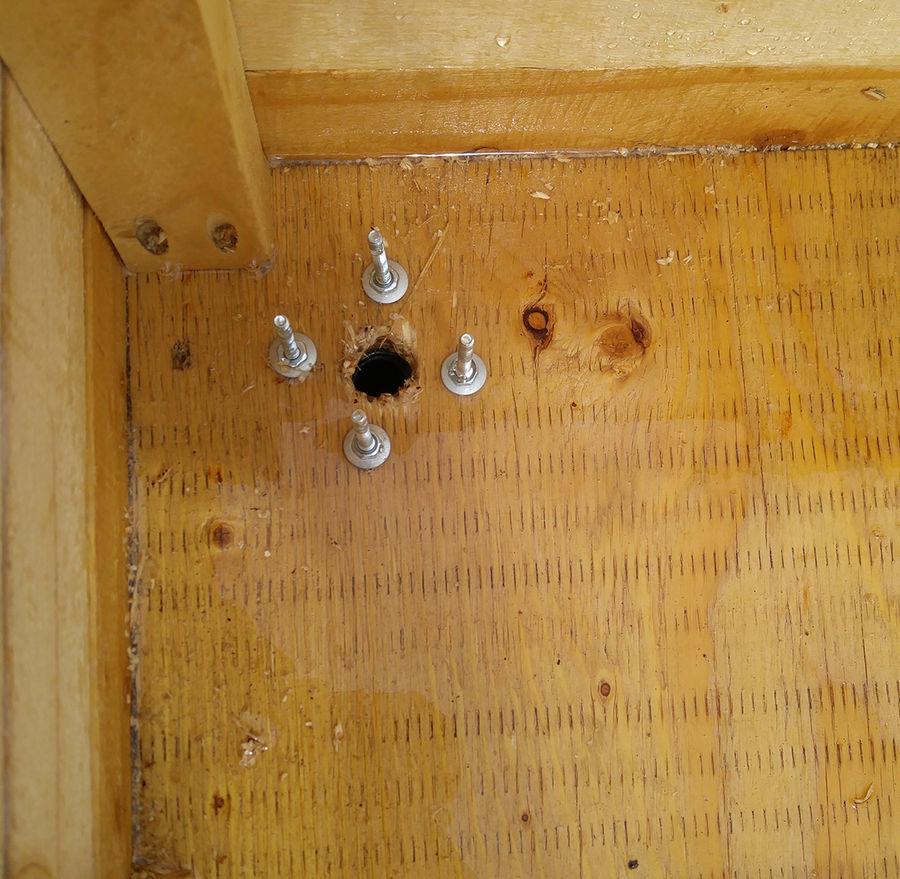 Every good planter needs to be able to drain excess water right?  Problem is with the dogs hiding underneath, you don't want the water to simply drain through the bottom and create a mud pit in their humble home.   The whole planter has a natural slope towards one end, so all the water runs to one corner.  Then I used a 3/4" flange mounted underneath.... and see next pic... 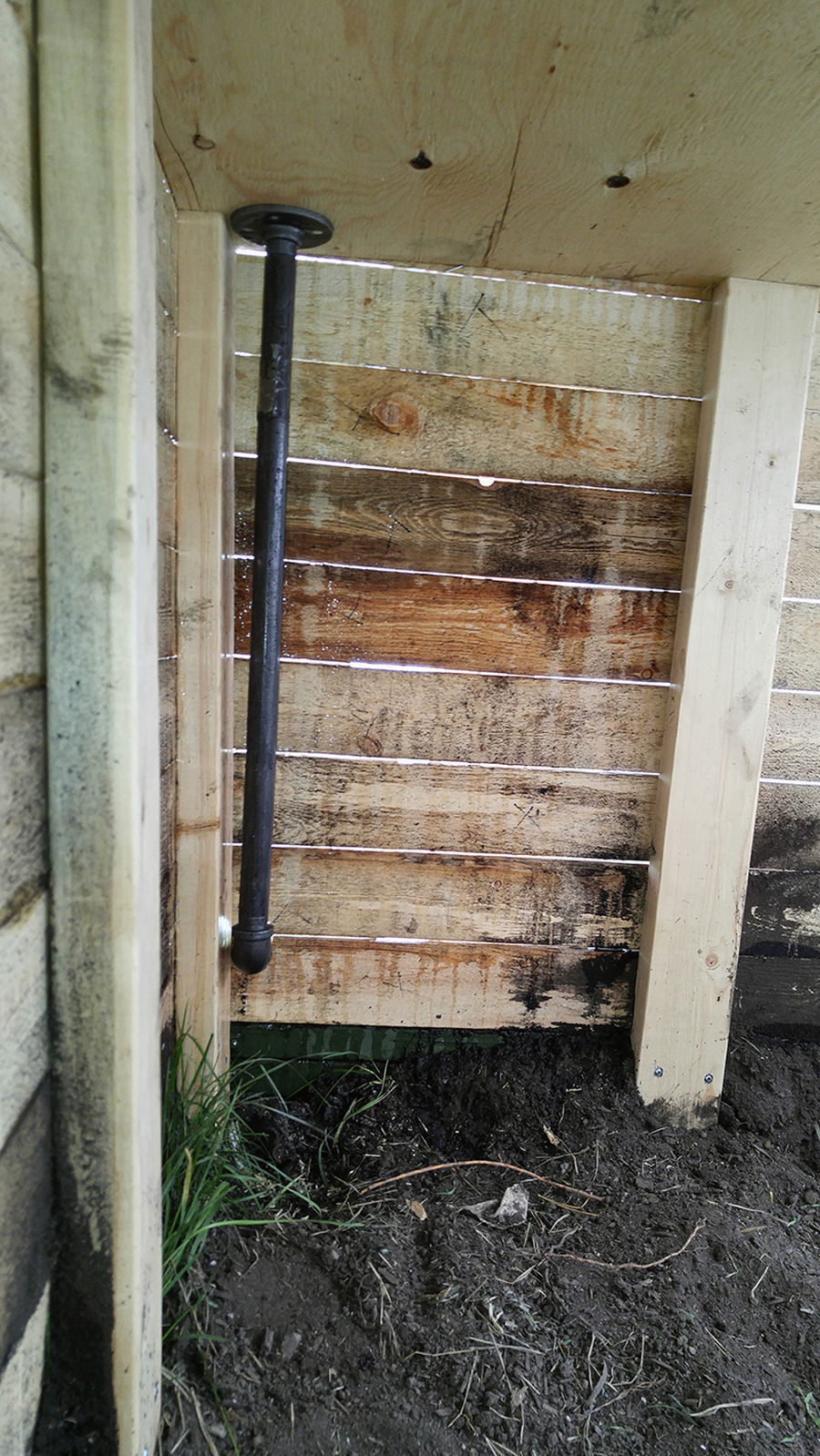 Ran a pipe from the flange down. Then out.

Tested by pouring water into the planter, and success!!!!  (we applied BLO long before doing any testing).   All the water runs away from the dog house, just like a real house. 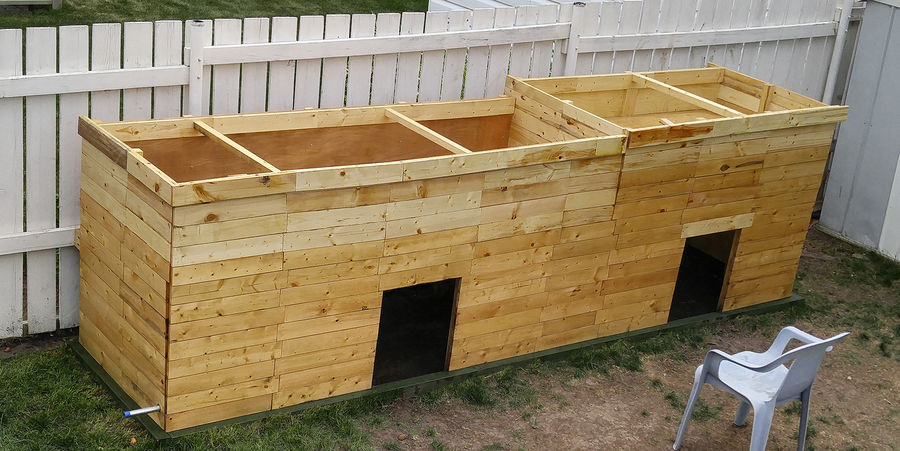 Finished the boards and added a couple of cross beams for extra strength.  These also act as handy dividers to know what is planted where. 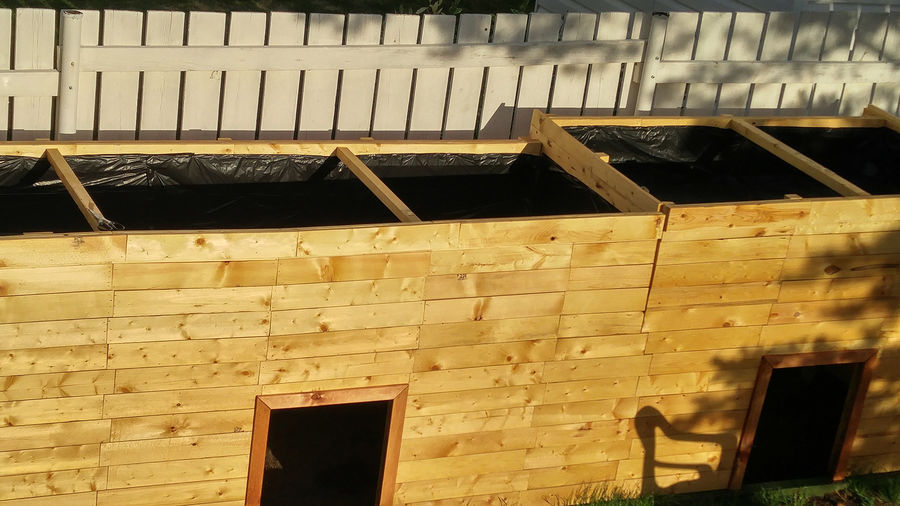 Lined the whole inside with black garbage bags.  Used a crown stapler for this part. This will protect the wood against rot, and also guarantee the water flows into the corner like we want instead of leaking out early elsewhere.   Also added trim to the dog doors 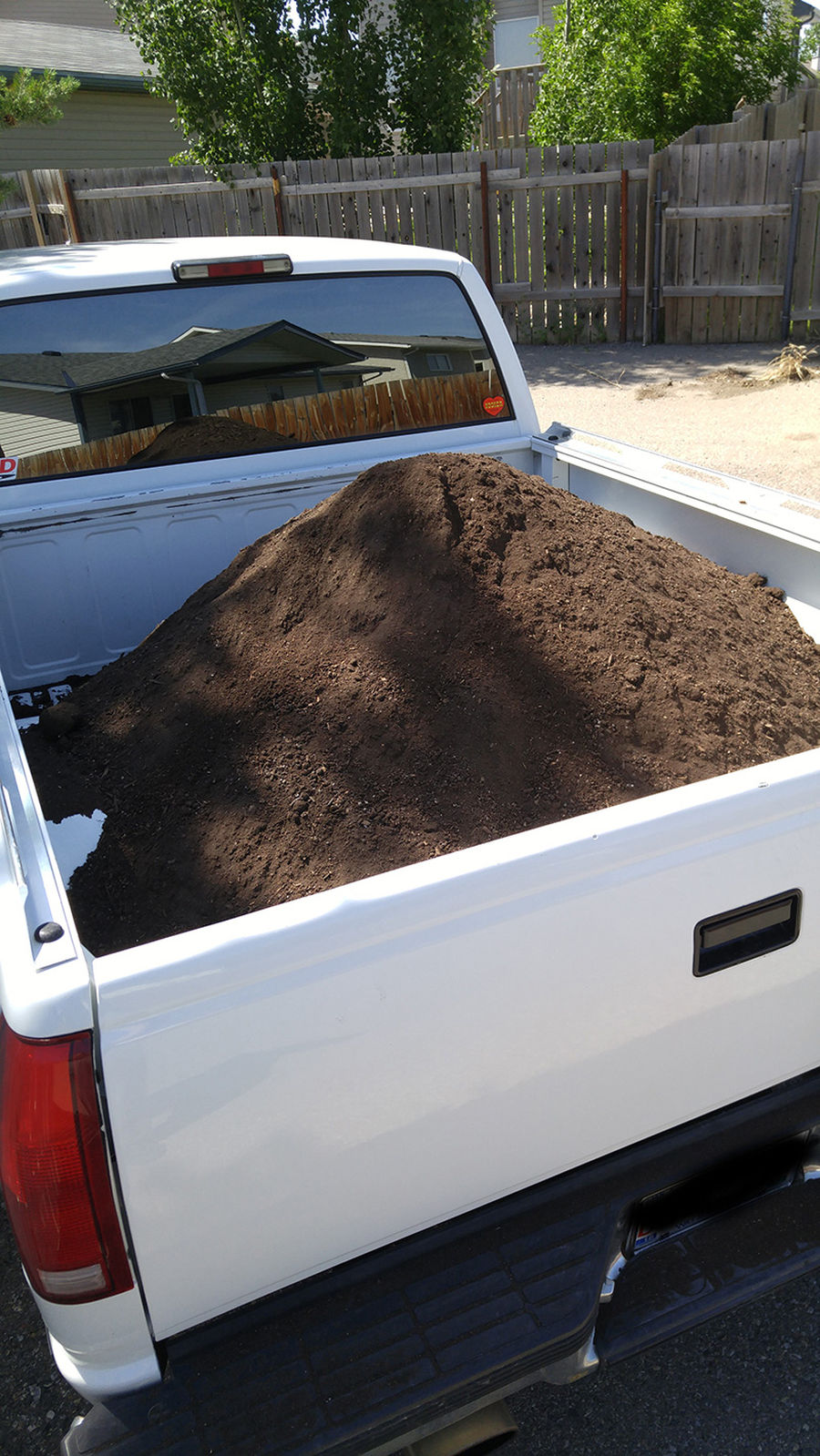 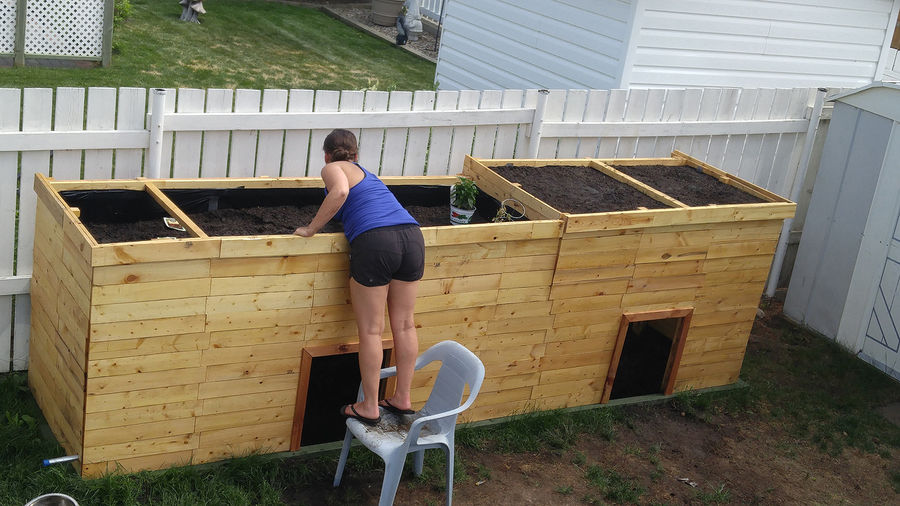 Remember when I said I might be making it too tall?  Whoops. Forgot the wife is 5ft tall....  I'll have to build her a stool next.
The right hand box is planted with herbs and spices, thus the soil level is more shallow.  The left is Veggies and allows for deeper soil.
In the future I'll be adding more trim around the top and the corners that will be the same colour as the dog door trim. I think this will enhance the appearance.  But for now everything is sprouting nicely and hopefully we get some veggies before the first frost!