This desk took me way longer than it should have to finish, over a year from start to delivery. A lot of that time was static and I worked on other projects, but I could have been done a long while ago. The desk is a riff on a design my client saw at Pottery Barn but I dressed it up a bit and gave it some extra drawers. Material is soft maple and it has a heavy espresso stain, which I refuse to do again. 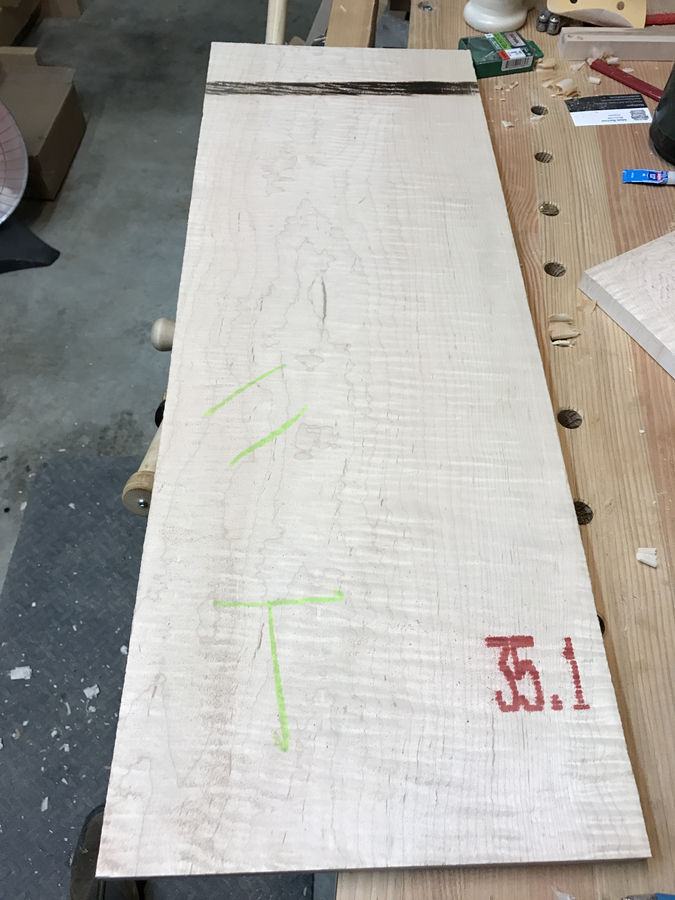 Because this project took so long, my documentation is the worst I've ever done. Sparse and few and far between. This the material I was working with, soft maple, and a bunch was curly. I should have gone back for straight stuff, but I didn't have the budget to personally take the curly stuff for myself. Oh well. 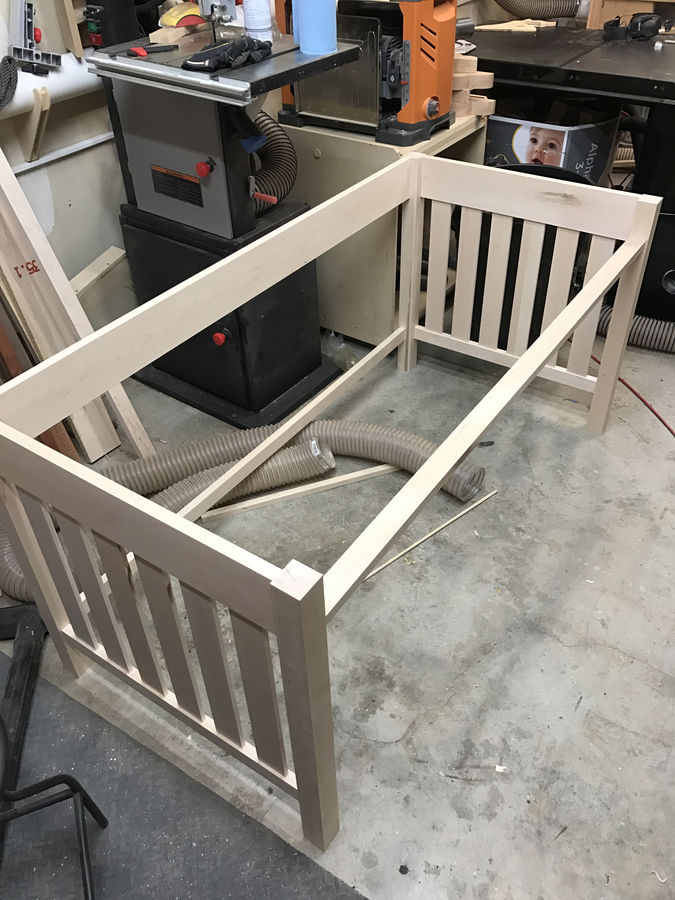 Jump to the future. Everything up to here was straight forward in construction. All joints mortise and tenoned, no surprises. 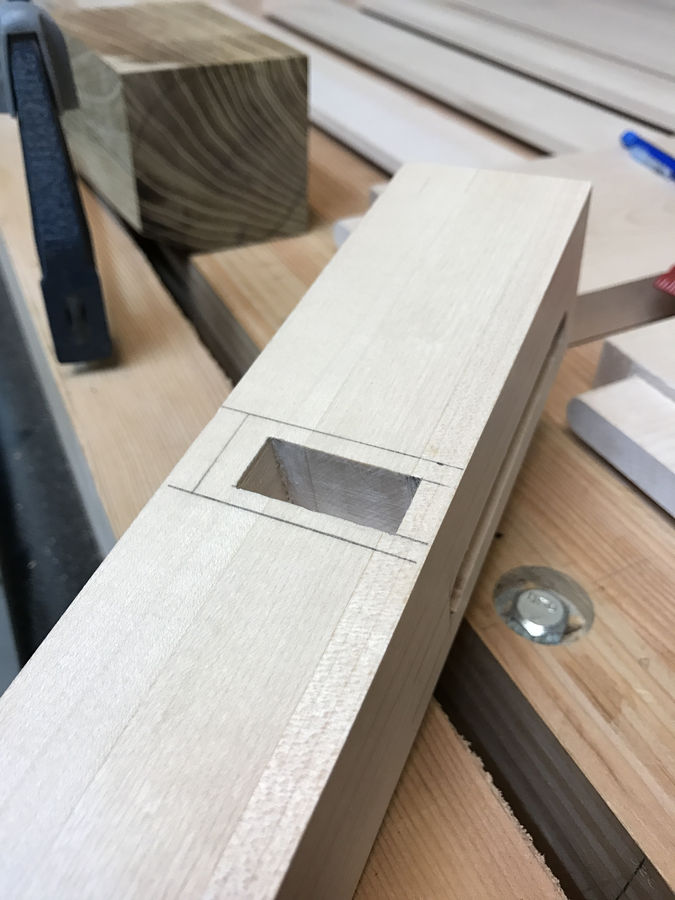 This is the mortise that delayed me months. It was the drawer support rail in the front. It was perpendicular to the leg so using the router was out of the question. I kept putting it off and off, but in the end it wasn't too bad to cut by hand. 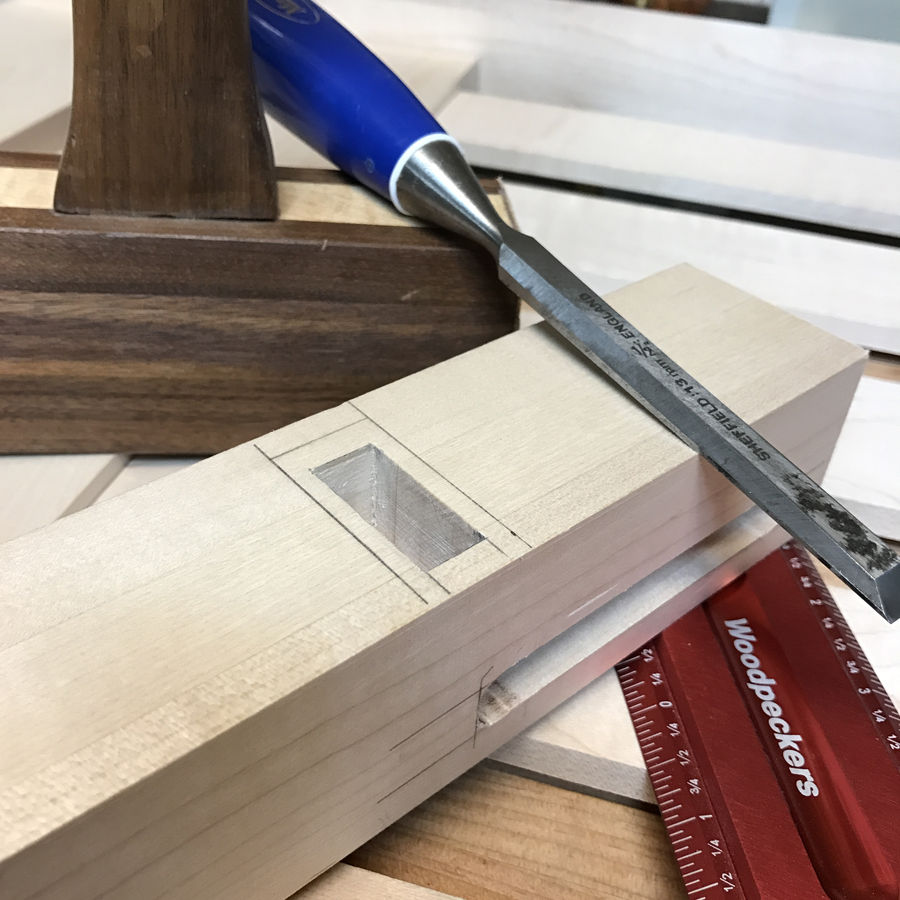 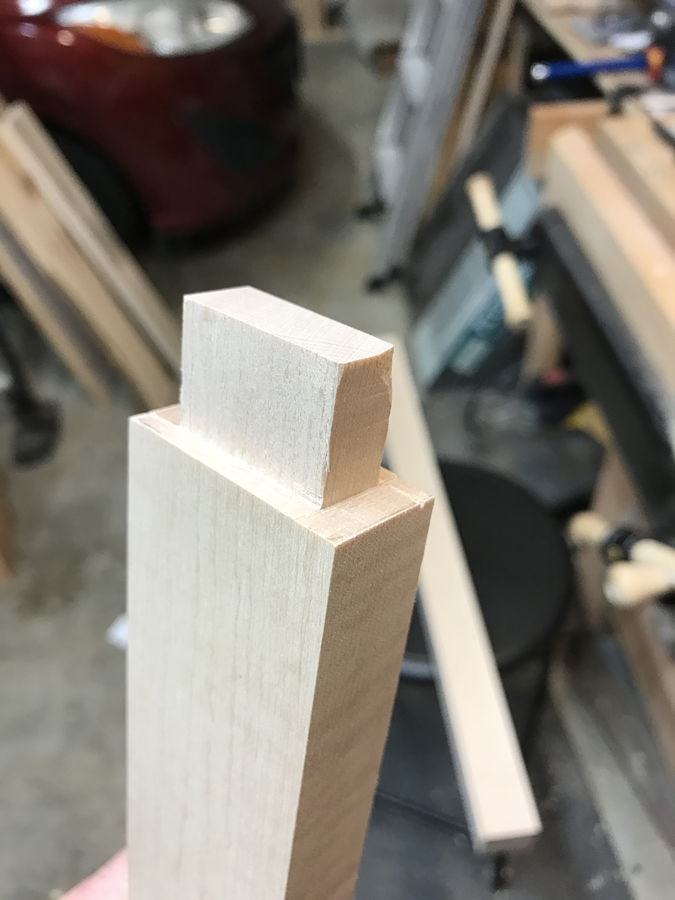 Matching tenon for the drawer supports. 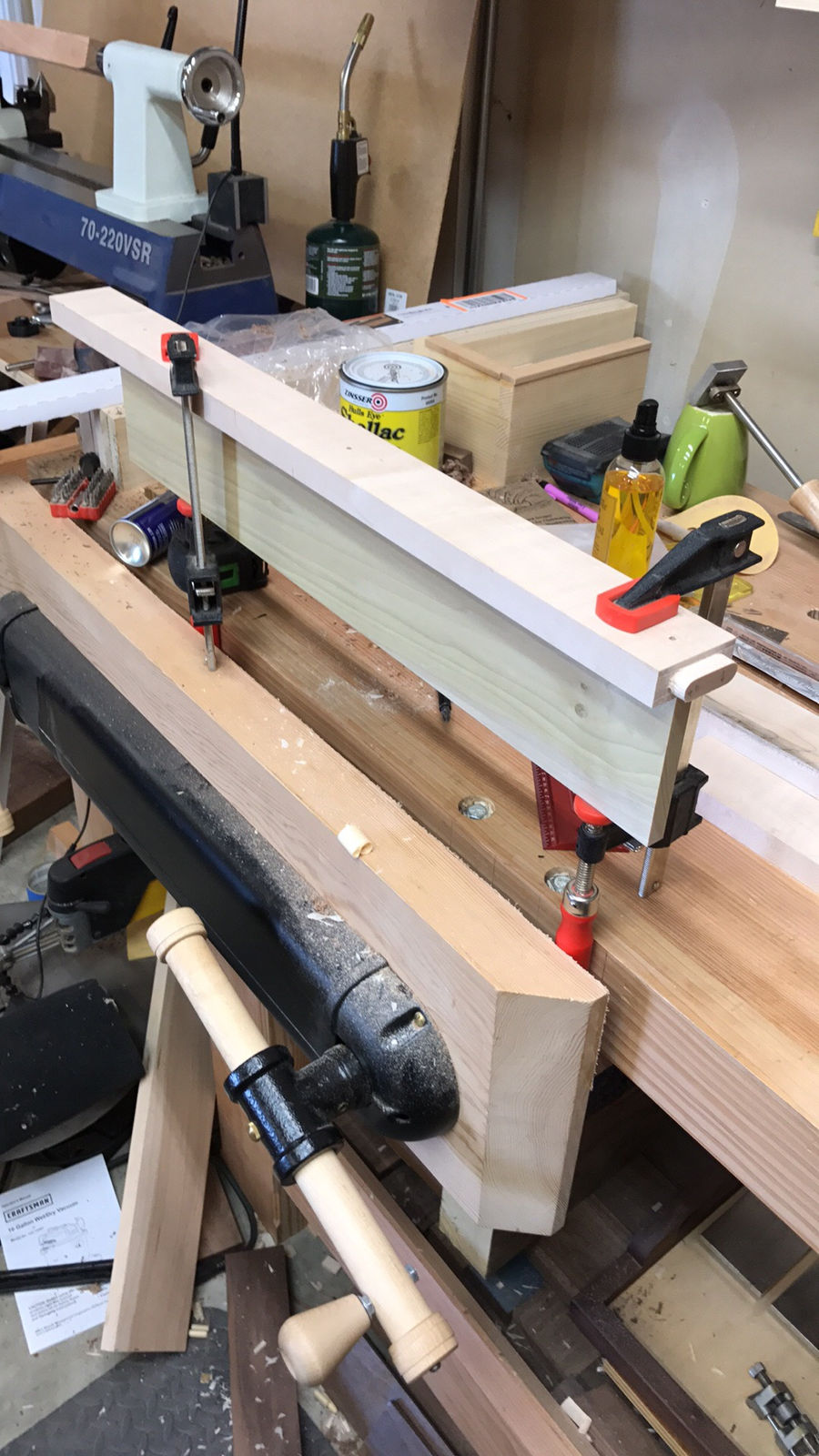 I felt pretty proud of myself for this idea. I had to hold the drawer dividers a way to screw in the walls (which were totally unnecessary by the way, would not make them so huge next time.) So I clamped the assembly together and held the handles in my twin screw. Worked like a charm, got this stuff done so fast. 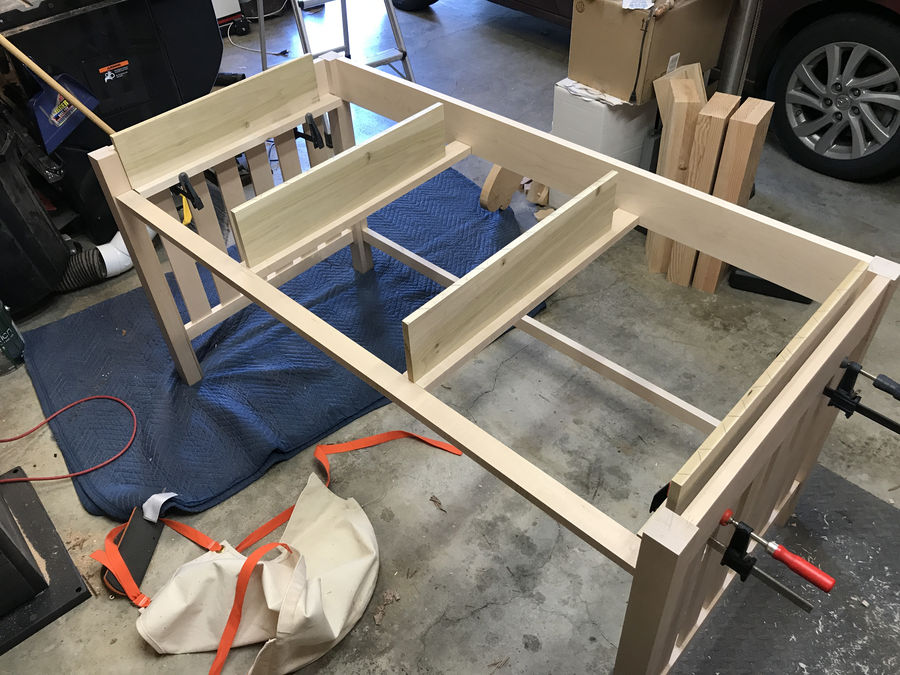 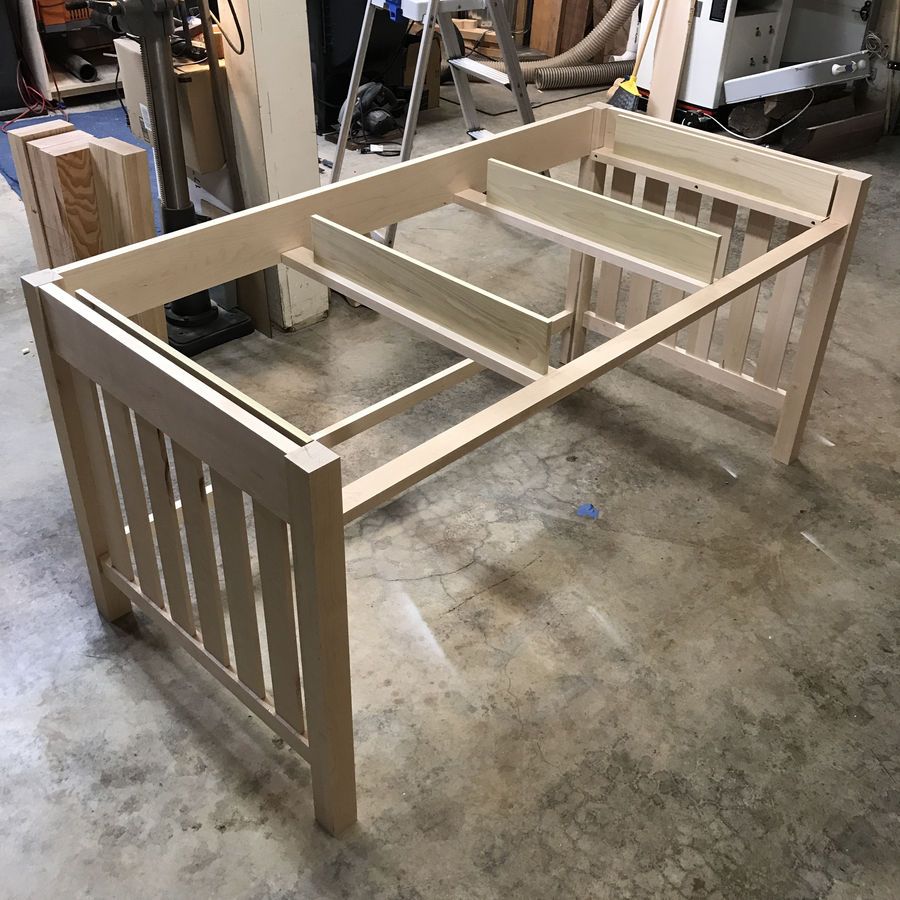 Body is complete with only some odds and ends to clean up on the design before finish prep. 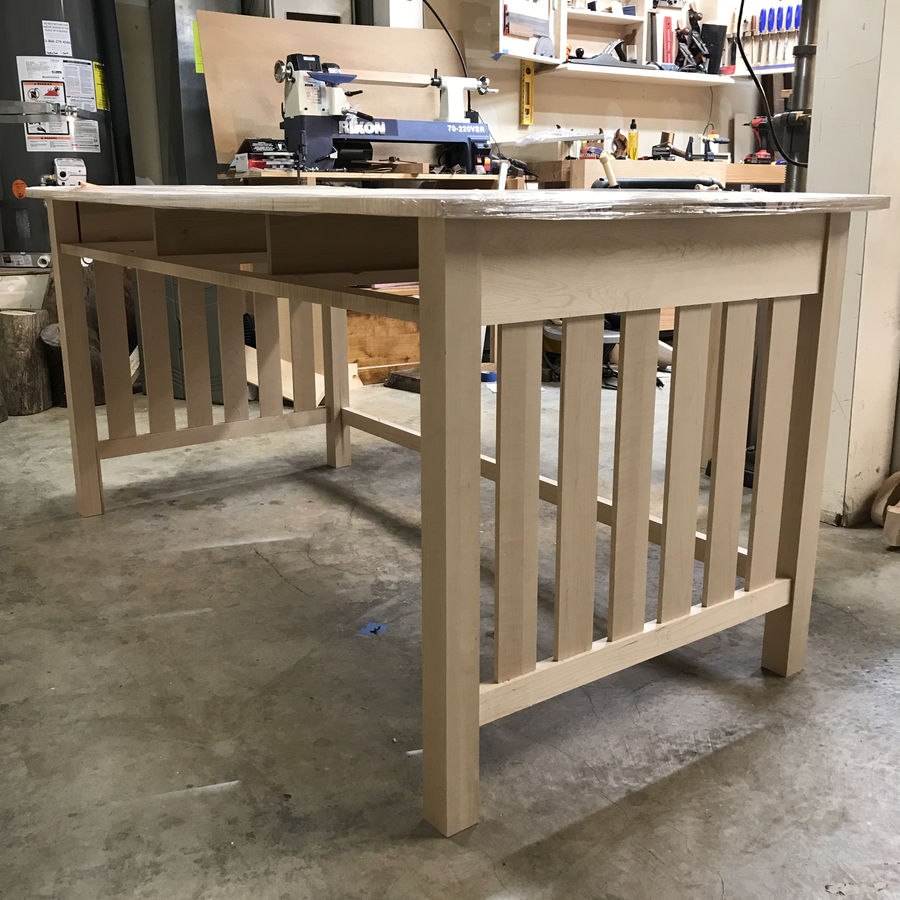 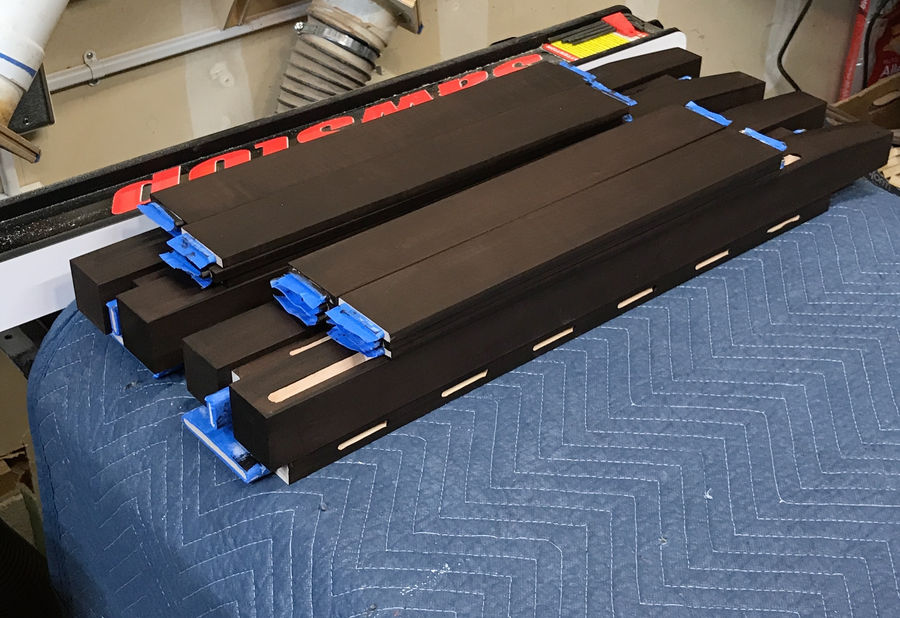 I'm a recent convert of pre finishing components and this was a great exercise. For a design with so many slats, I find it easier to get a good finish this way than trying to do it all assembled. I don't think I'll ever finish a project after it's glued up again if I can help it. 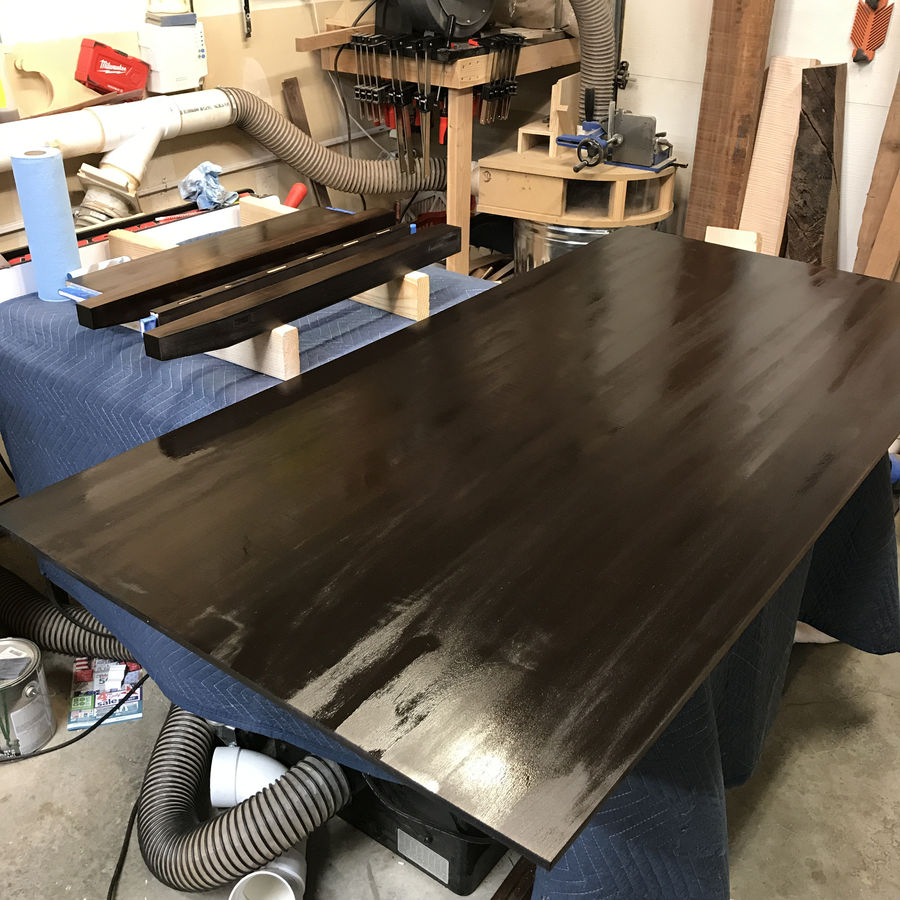 Finishing something of this size is always a bother. It takes forever and you got to work hard to not have streaks. 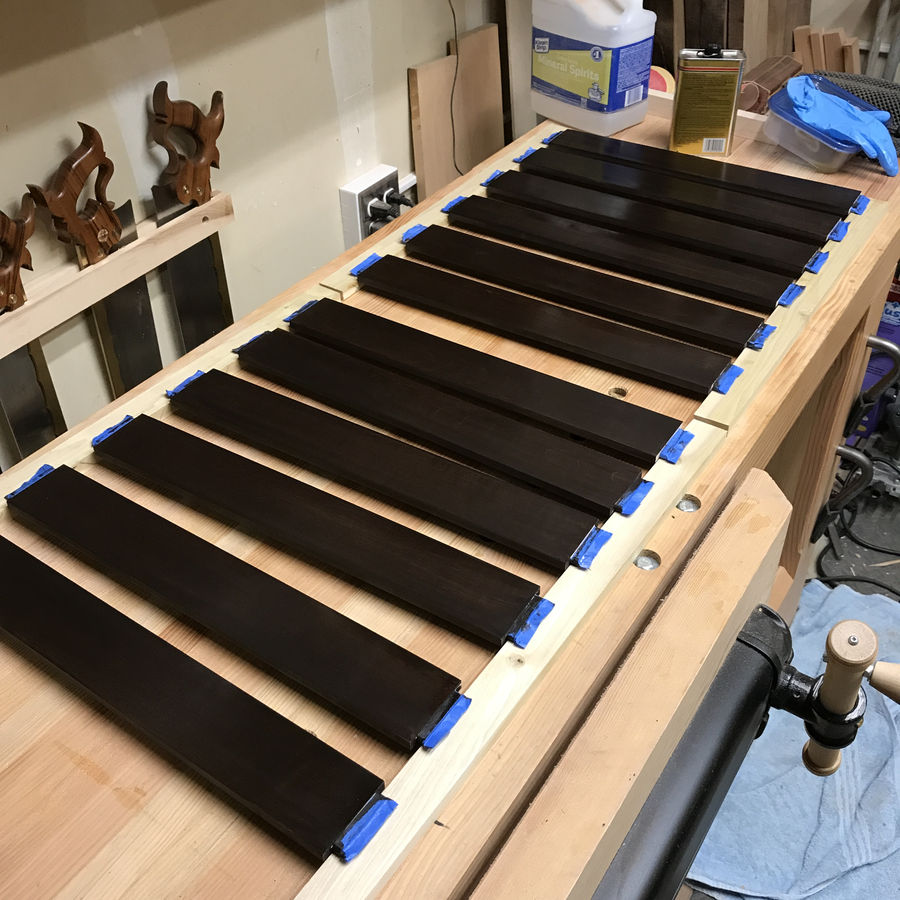 Lots of slats to do. 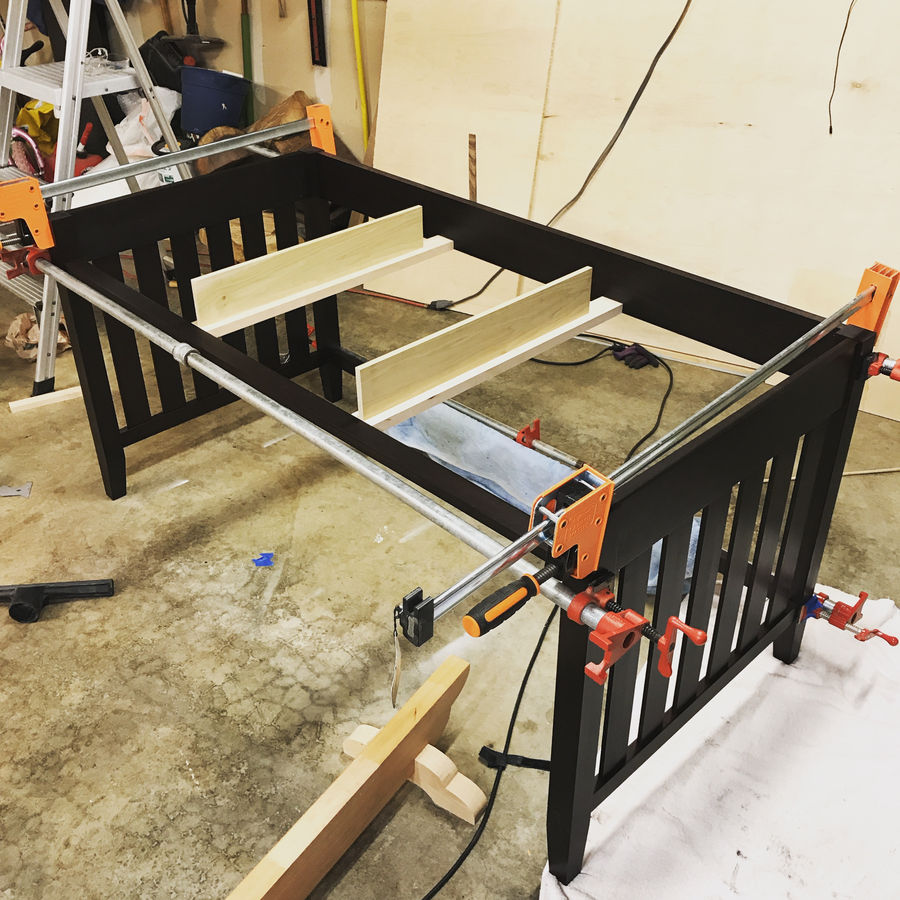 I used epoxy for the glue up, so I had more than enough working time to get it all together. This was the second stage, I did the sides previously. 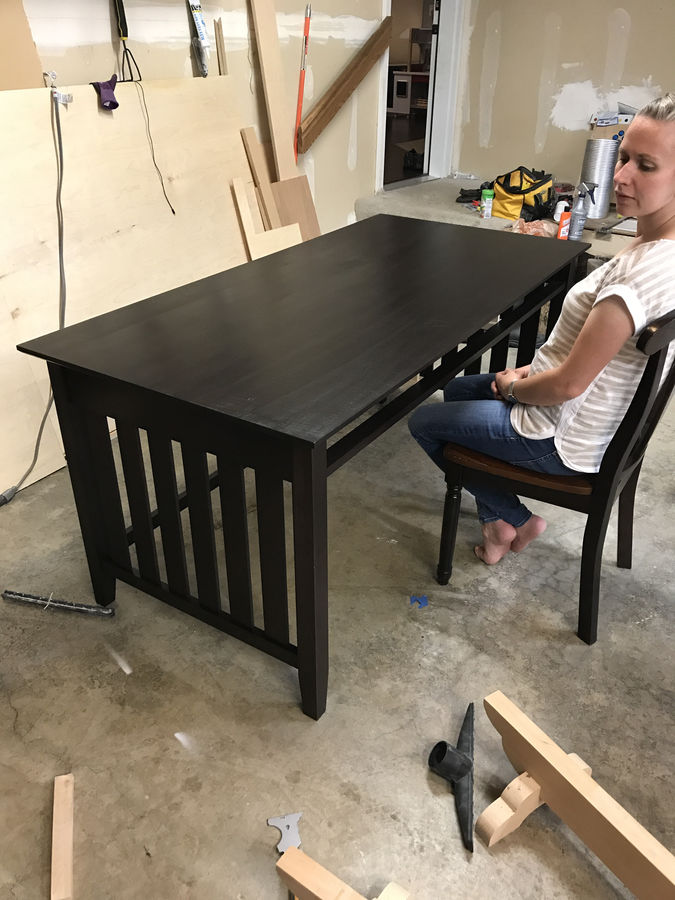 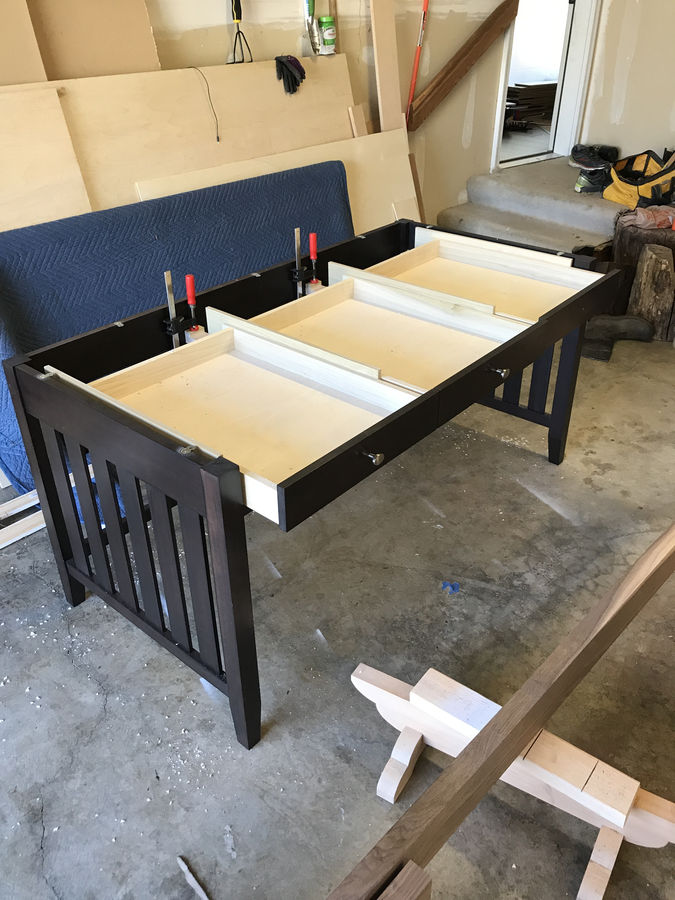 No shots on the drawer construction. Pretty simple, no dovetails, just dado and rabbet construction with a false front. Piston fit and waxed up so they slide like butter. 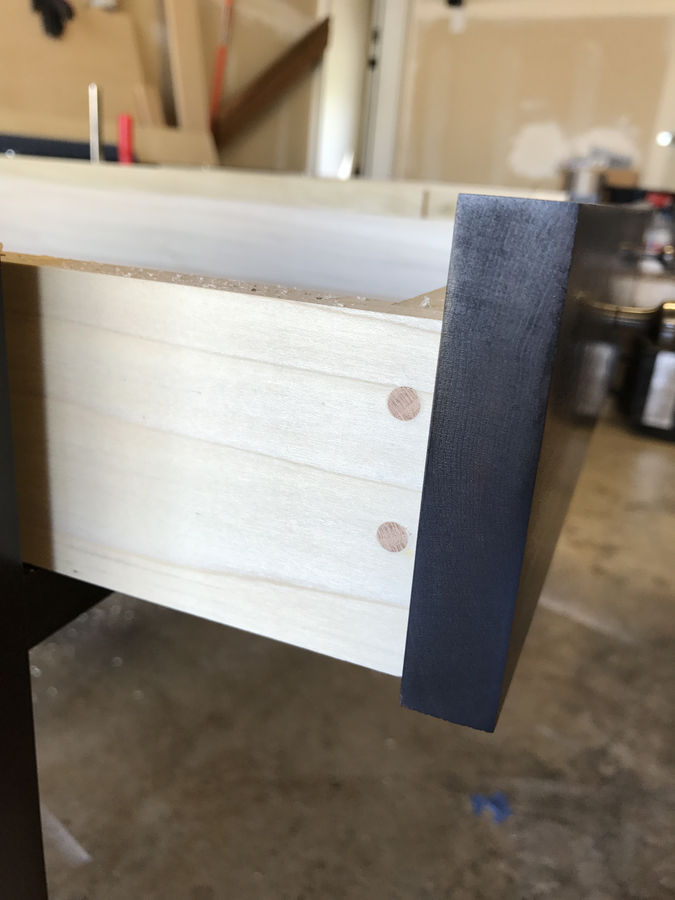 I used oak dowels on the front to reinforce that joint. It shouldn't be going anywhere. 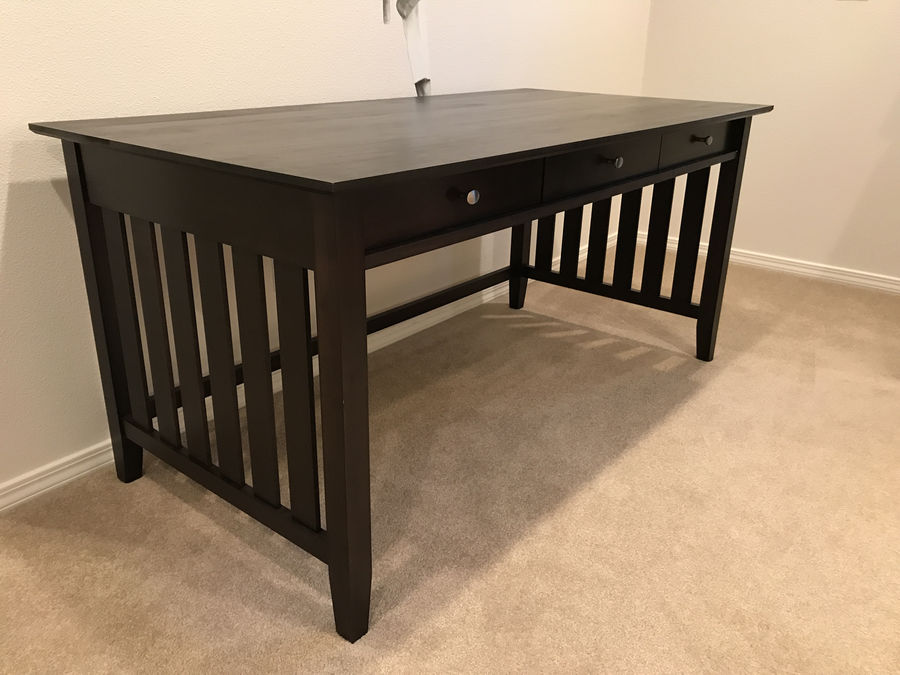 Delivered and out of my hair. Although the total time was over a year, I probably could have been done in a month or so if I had kept on top of things and not let procrastination and demotivation take hold. 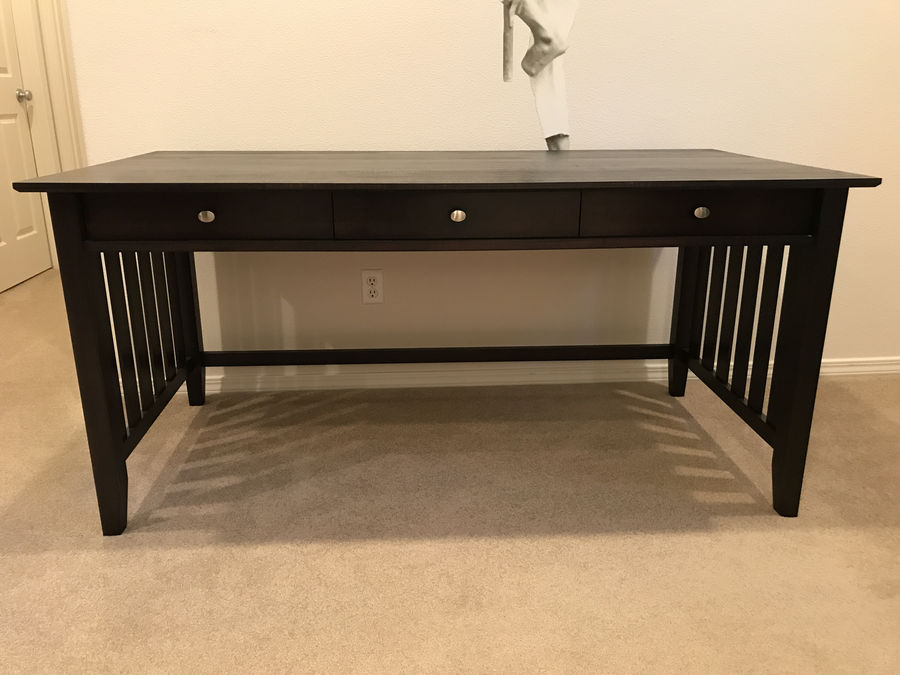 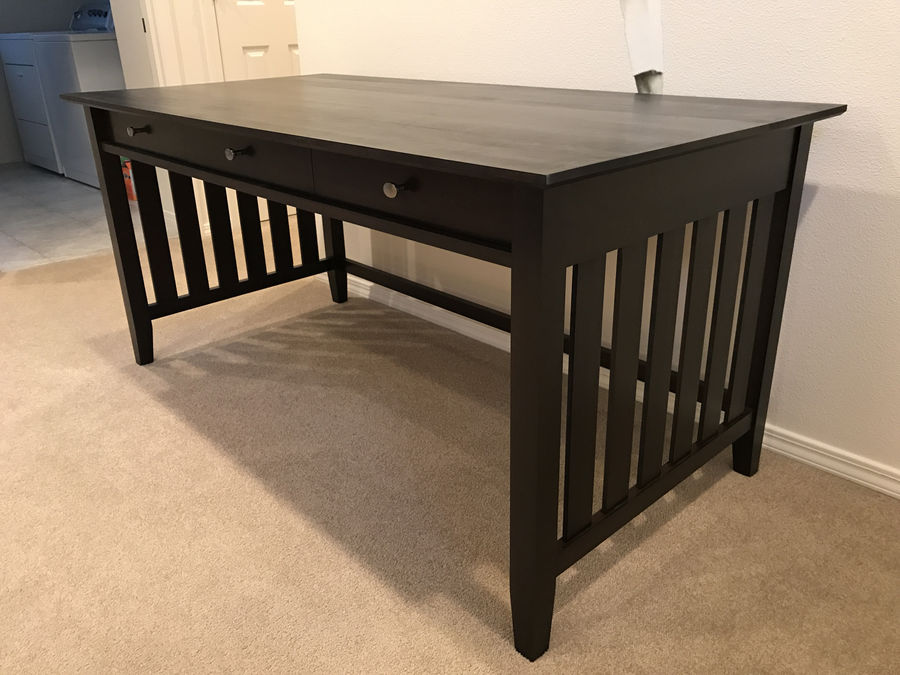 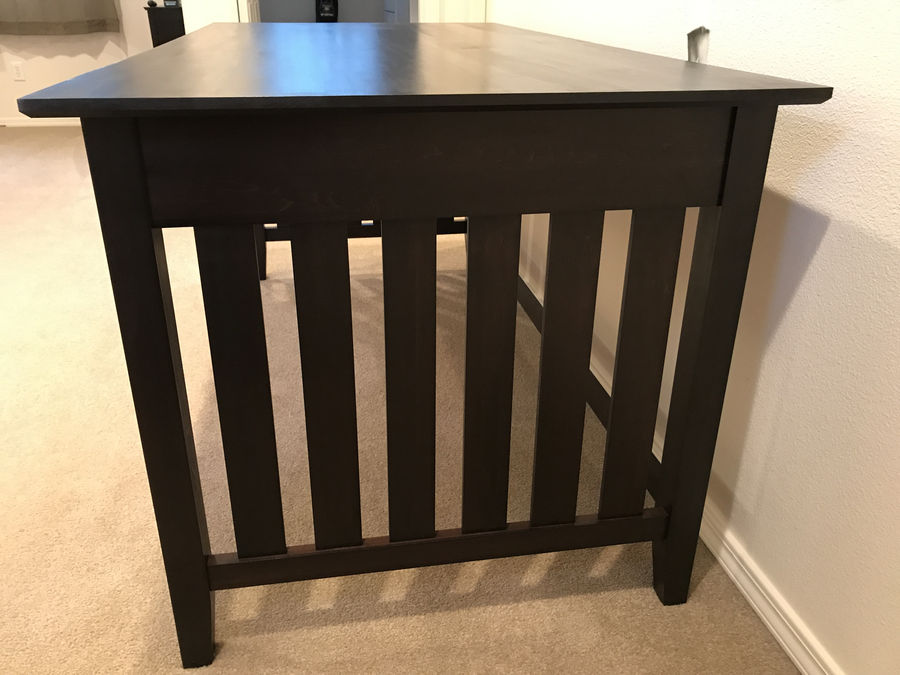 Great looking desk. I really like how the finish came out, too. Thanks for sharing.

It looks wonderful. I like the clean style and the finish.