I'm waiting on some finish to cure on one project and preparing to start on an upcoming tabletop, so I decided that today is a good day for some maintenance.

It's been two years since i did the initial flattening on this bench and it's also looking pretty dingy. With a table next on the project list I need the benchtop as flat as possible. 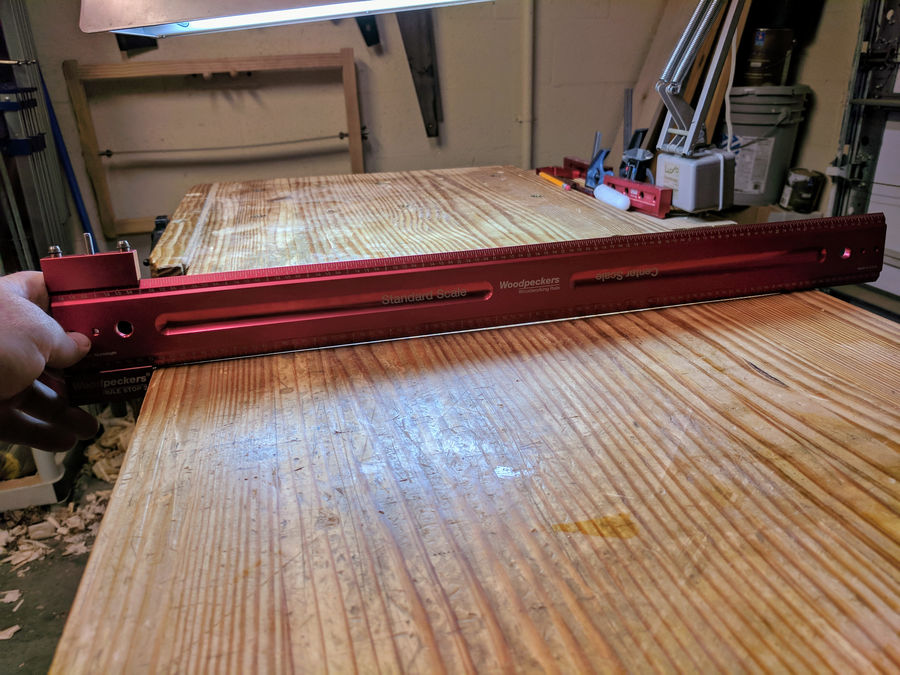 Most of the work I do on this bench is with relatively small parts so overall flatness is not a big concern for me and has not been an issue. But before I begin my next project that will have some wider boards and panel glue-ups I thought I should check the condition of the benchtop.

I've got about 1/16" cup in the middle, it's consistent down the length, but there is little to no twist. 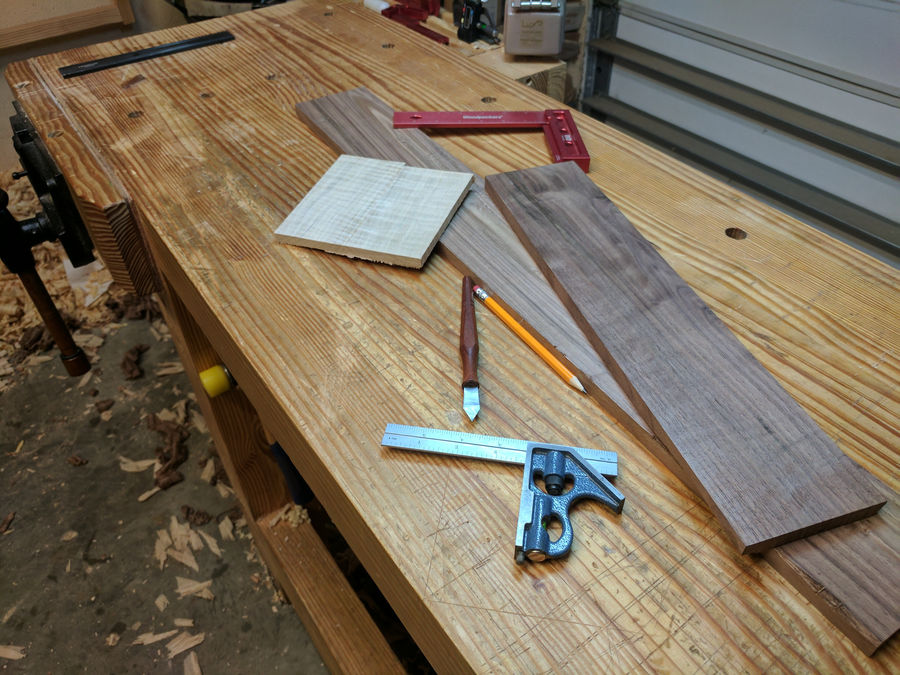 In this picture you can see that the top is pretty dirty and beat up too. I don't baby my bench, it's a work horse. If I spill some finish on it I just rub it around, If i get glue on it I just hit it with a card scraper when it's dry. But I admit that after two years it could use a freshening up. 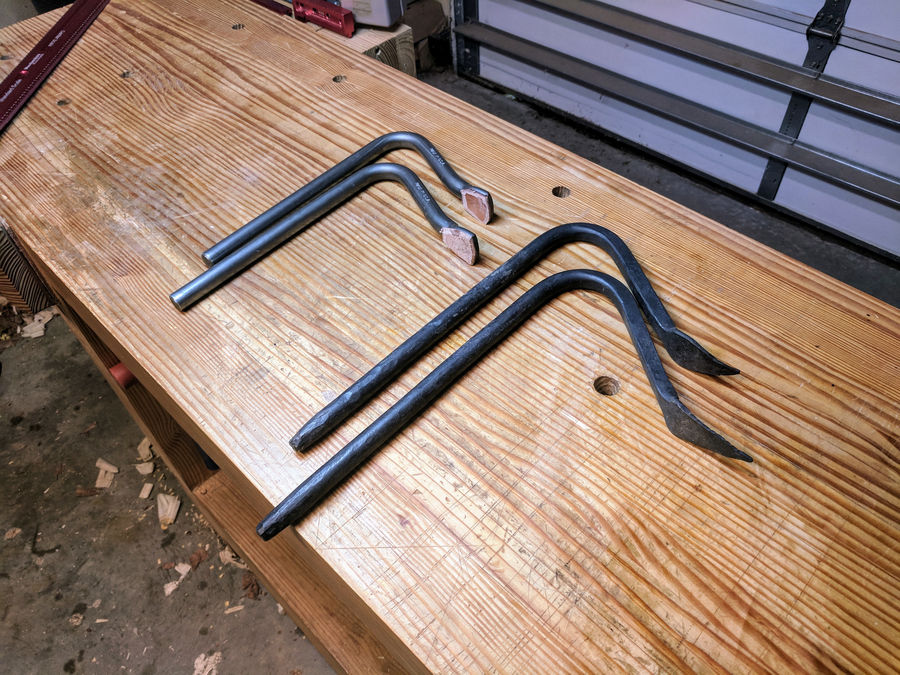 The third problem I would like to address is work holding.

James Write "Wood by Wright" on Youtube posted a video about this recently and it reminded me that I've got the same problem. I've got some wonderfull holdfasts from both Gramercy and from Black Bear Forge. They have never really worked that well in this bench and so I've just been using squeeze clamps through the dog holes. I'd really like to fix this too. 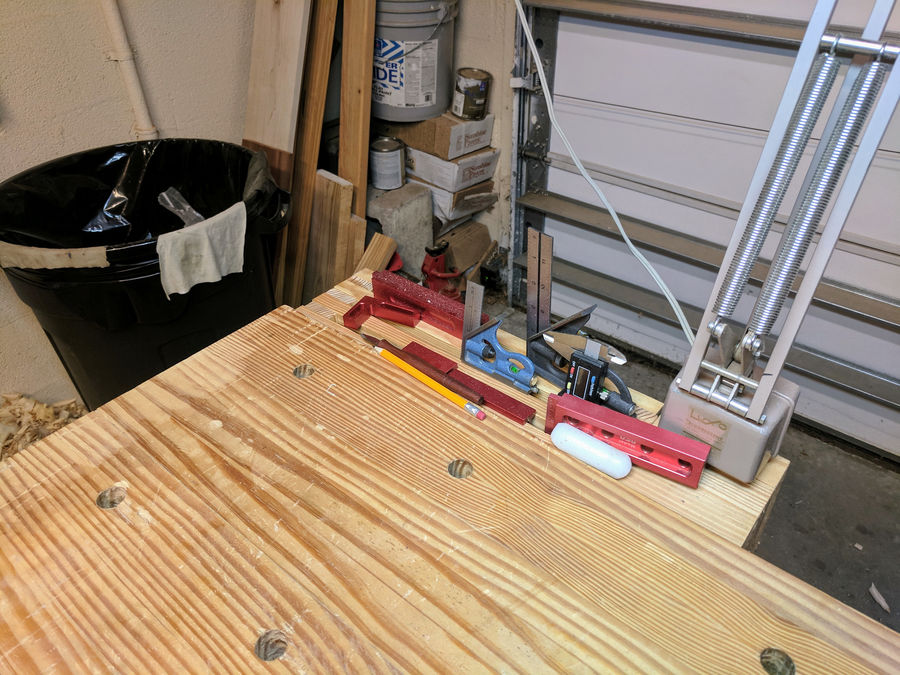 First thing to do is to clear out the hammers and brushes and jigs that I store under the bench and then I've got to take off the lamp holder and this marking tool rack that hang off the back of the bench. 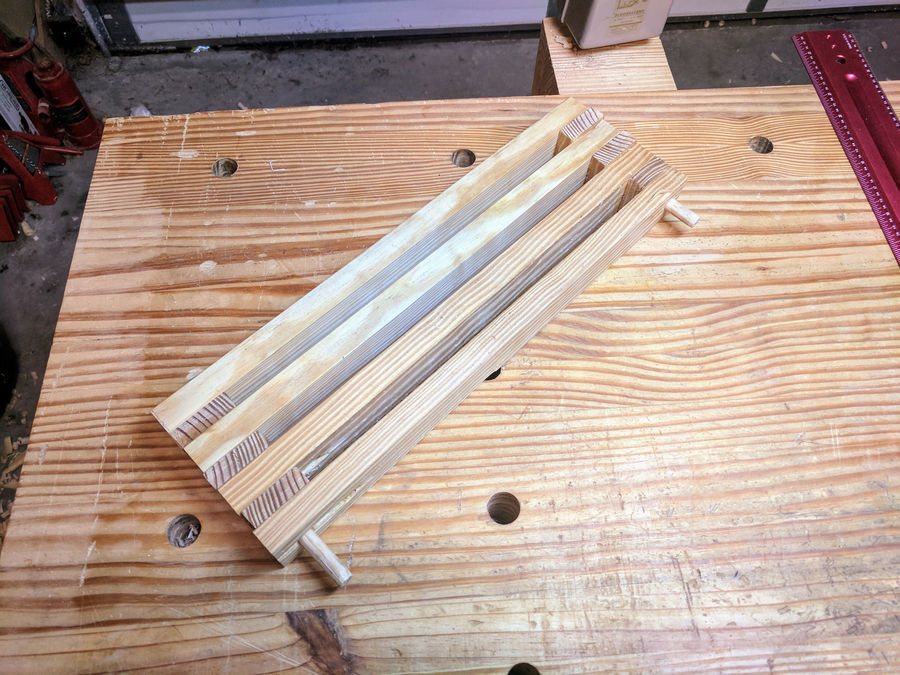 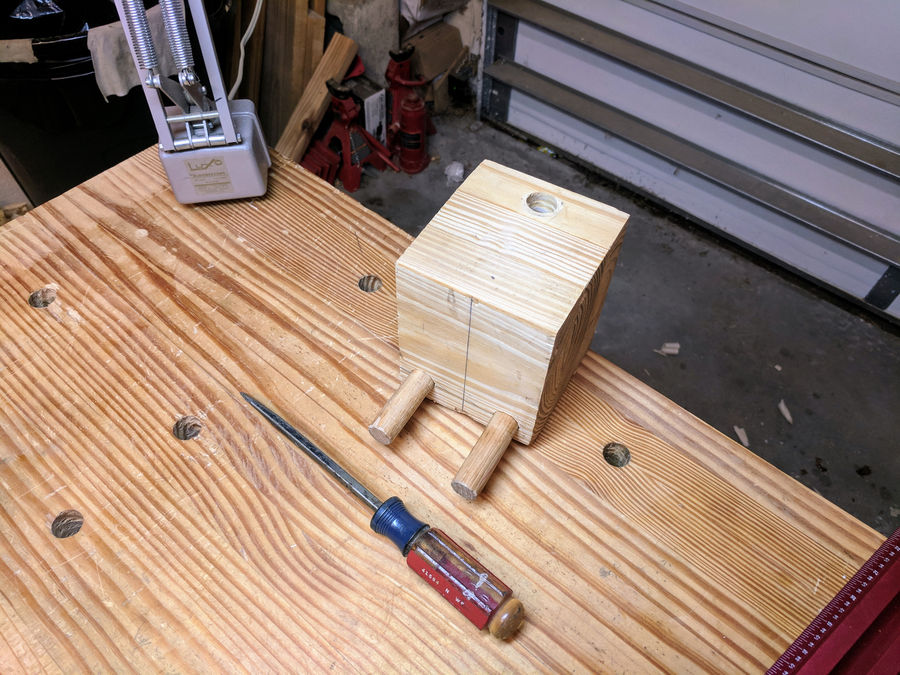 Tha lamp holder is actually an off-cut from one of the legs of the bench, it's also held in place with dowels too, but these are 3/4" due to the extra weight. 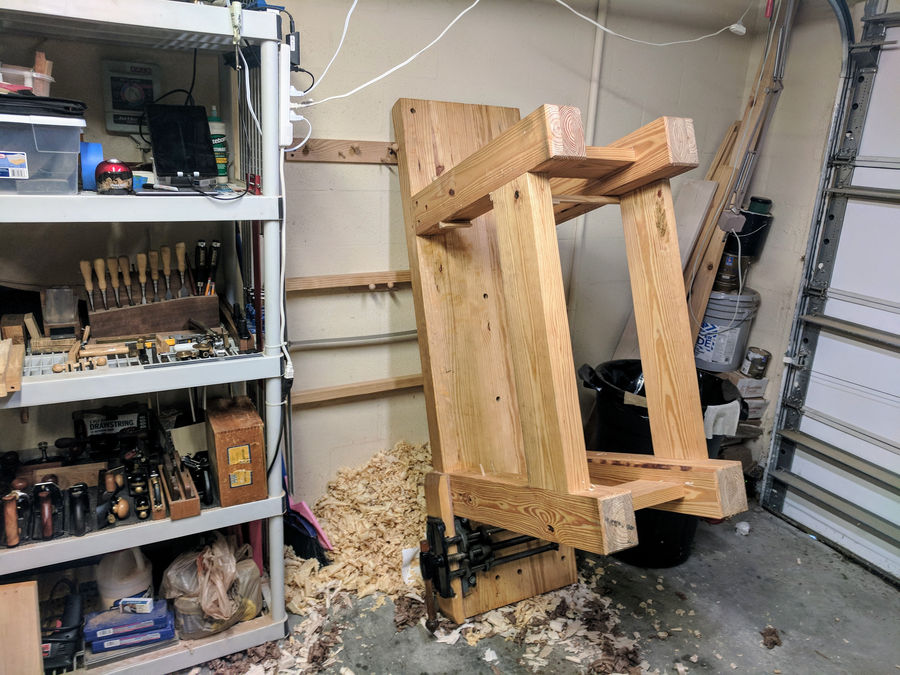 Leaning against the wall means I don't ever have to lift the entire weight of the bench. You know fulcrums and levers and such. 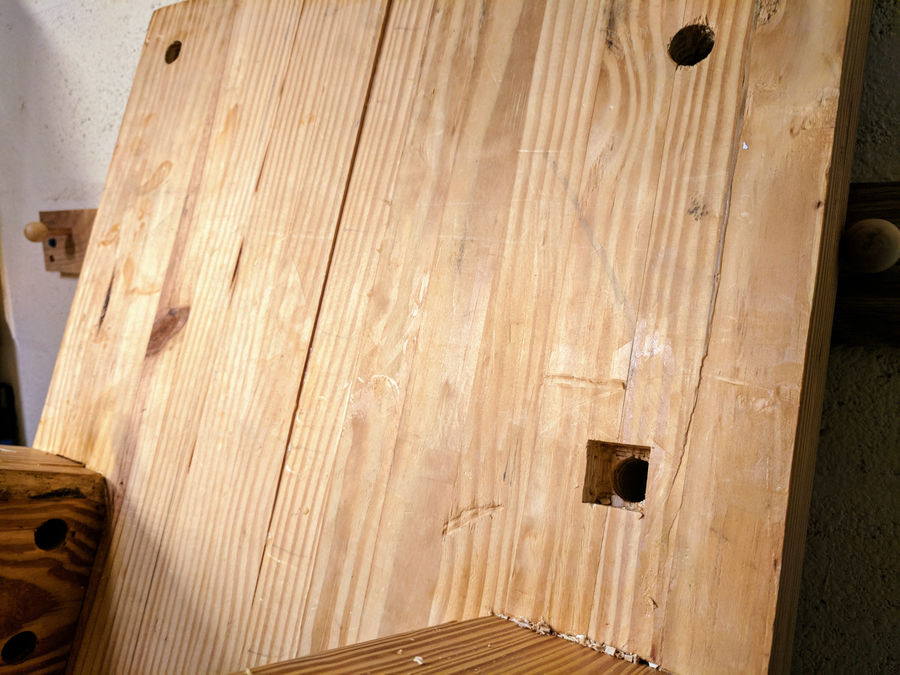 I picked one of the least used holes to test my method for fixing the problem. This hole is the least used due to it's position, but mostly because it's the one the holdfasts have the worst time with and if my fix works in this one I can move on to the rest of them.

My benchtop is 3 1/4" thick and it's my belief that it's just a little too deep for the holdfast to rack inside the hole and lock in place. My remedy is to use a 1" chisel to remove some material at the bottom and effectivly shorten the hole. I started with 3/4" of material and if that wasn't enough I could go deeper. Luckily it was exactly enough, the hole is now just 2 1/2" deep from the top and both types of holdfasts work perfectly. I'll now go back and do this to all the other dog holes in the bench. 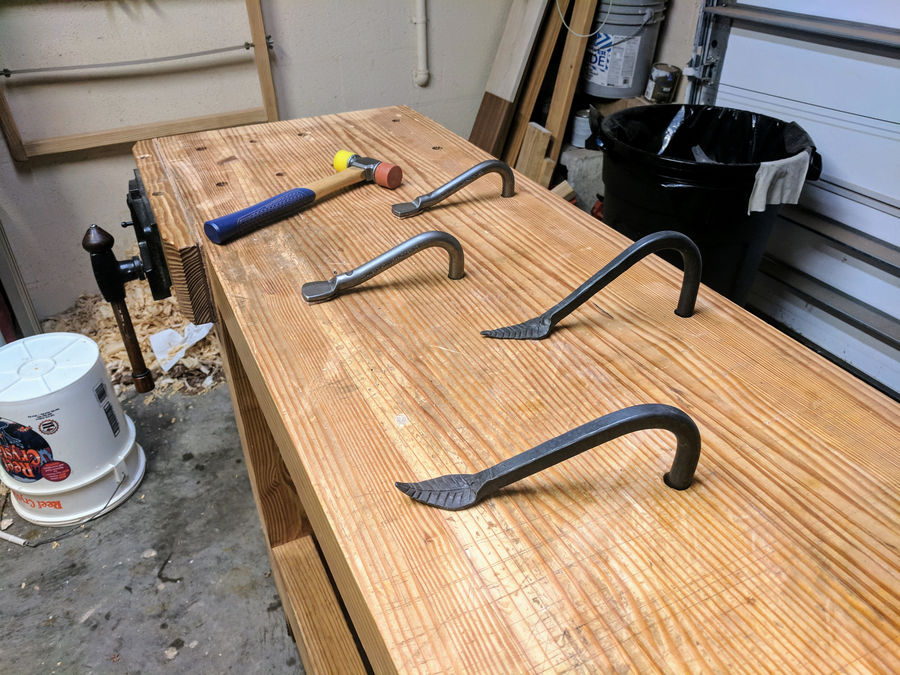 All of my dog holes and holdfasts now work perfecty!

You can see here just how dingy the bench looks, let's take care of that. 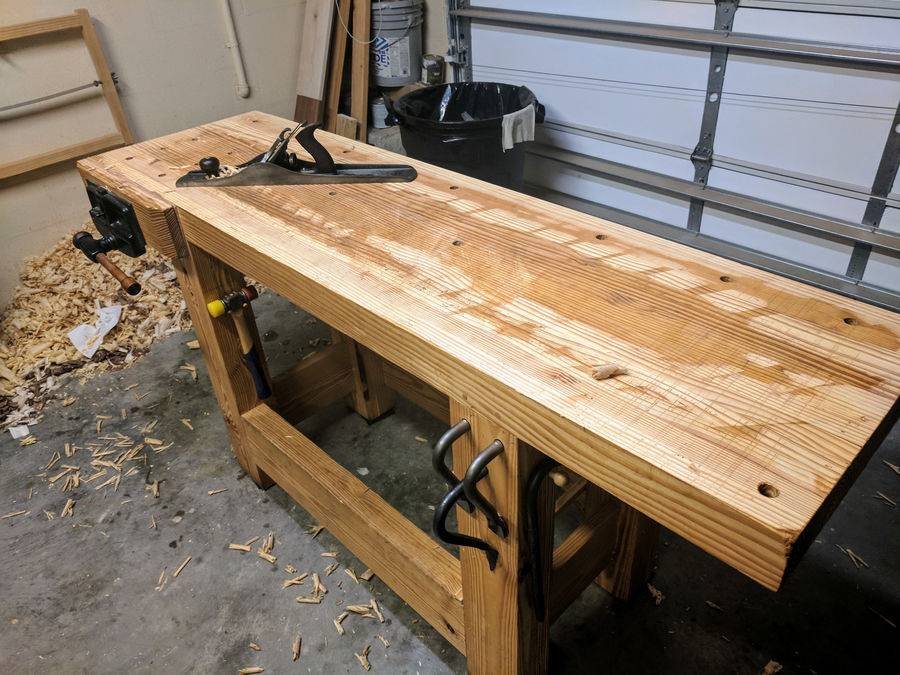 I got out my Stanley #7 jointer. I set it for a fairly light cut at first to get an idea of where the highs and lows were.

I ran diagonoly across the bench in two passes in opposite directions. 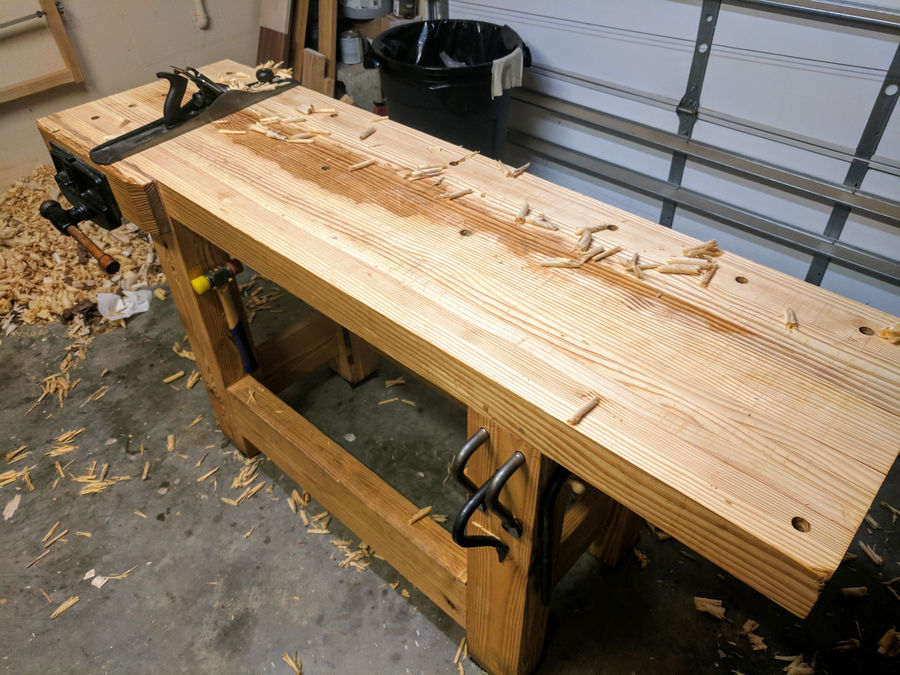 Once I had a good idea of where things stood I deepened my cut and got to work. I continued traversing in opposite directions until I got to what I thought would be my last pass. At this point I lightened the cut and ran with the grain until the last of the low spots dissapeared and I was getting full length shavings. This only took about eight passes total including the initial two passes.

I switched over to my 4 1/2 smoothing plane and took light shavings with the grain until I was getting full length and width shavings across the entire top. 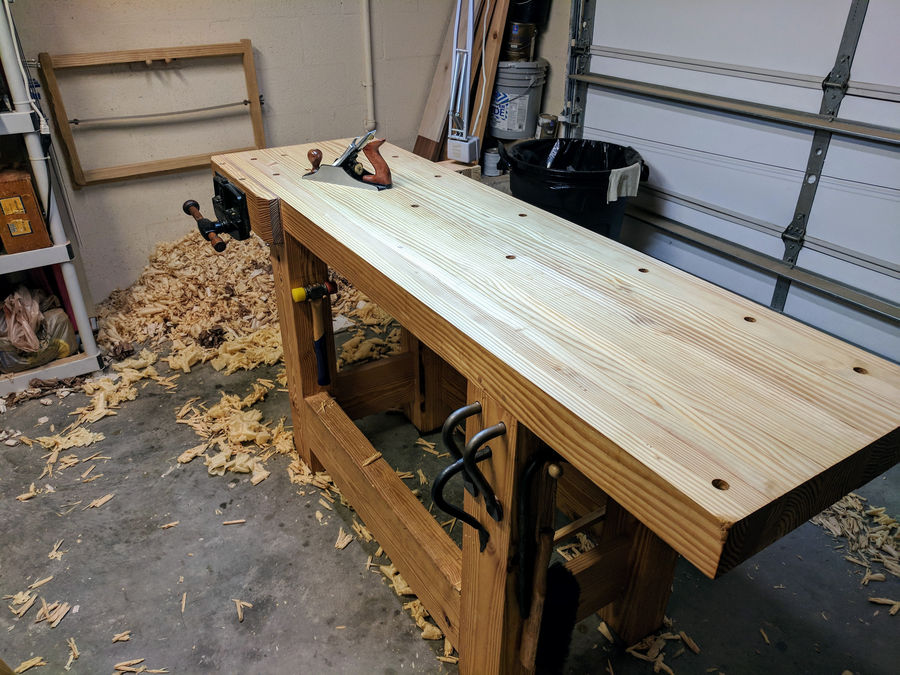 I don't use any finish on my benchtop, I like the grip that I get from the raw wood. 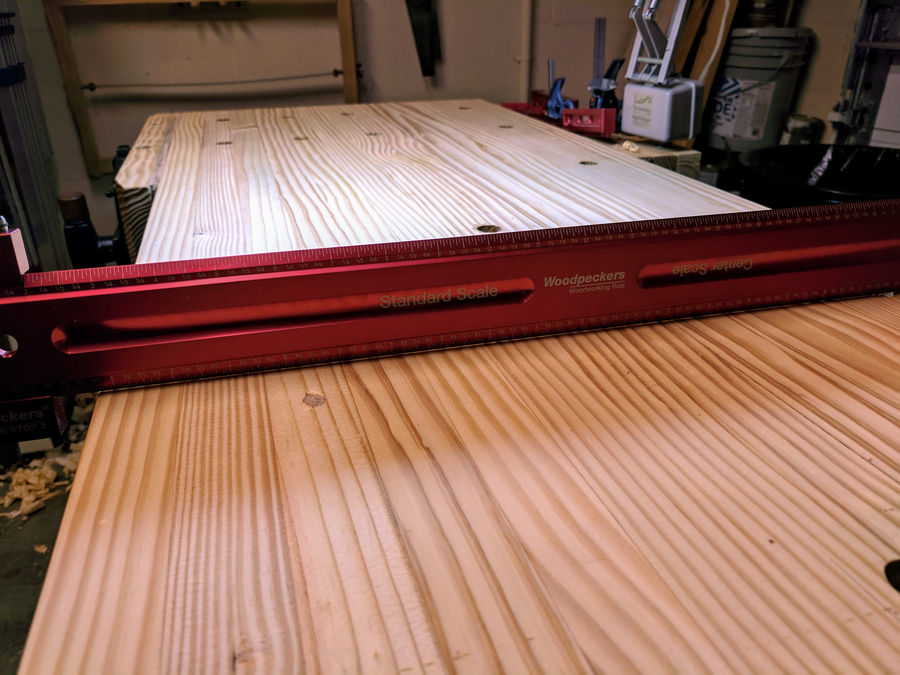 No more cup, holdfasts that work, and clean new surface ready to get back to building stuff.

Thanks for following along, I hope you liked it.

If you have any questions or comments I'd love to hear them.