There is a camp a few hours from us that is a Christian based outdoor camp, think outdoor school style camp.  My wife and I have done a handful of things for them, and most recently they were hoping I could make them some no trespassing signs, as they get issues with folks either ignoring the small signs you usually see, or thinking it is a public camp where they can bring their RV or tent.  So they came up with the wording, and I took some boards they had sitting around that were re-claimed from various other projects they have done over the years, and went to work using the Rocker sign kit and a router.  The Private Camp sign is ceder that was meant to be decking, the other is probably pine, I stained it darker to be a closer match, and to make the white letters pop more. 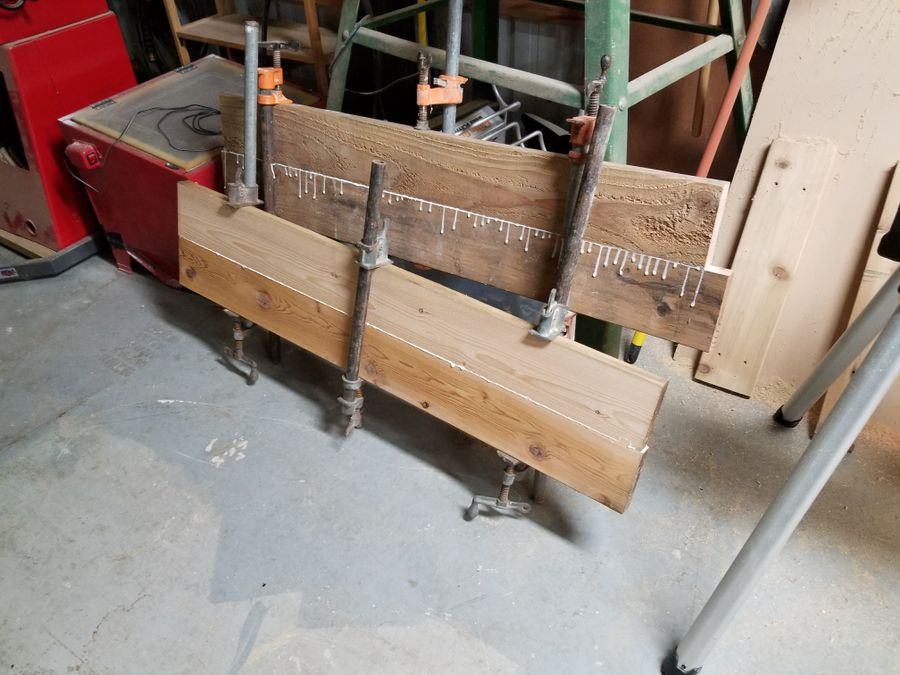 I jointed one face and one edge and glued up the boards.  These were reclaimed from the camp.  The boards in the background have the jointed face away. 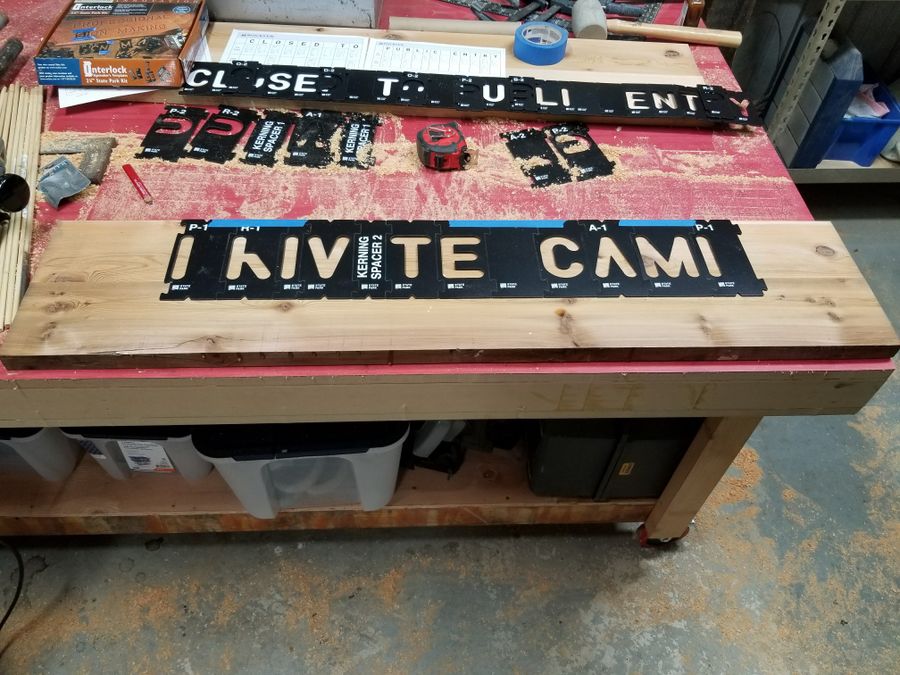 Using the Rockler sign kits is pretty easy, but its not fast!  They have a wizard online to help you with what order to do things, and it helps with kerning (some characters need less or more space when next to each other). 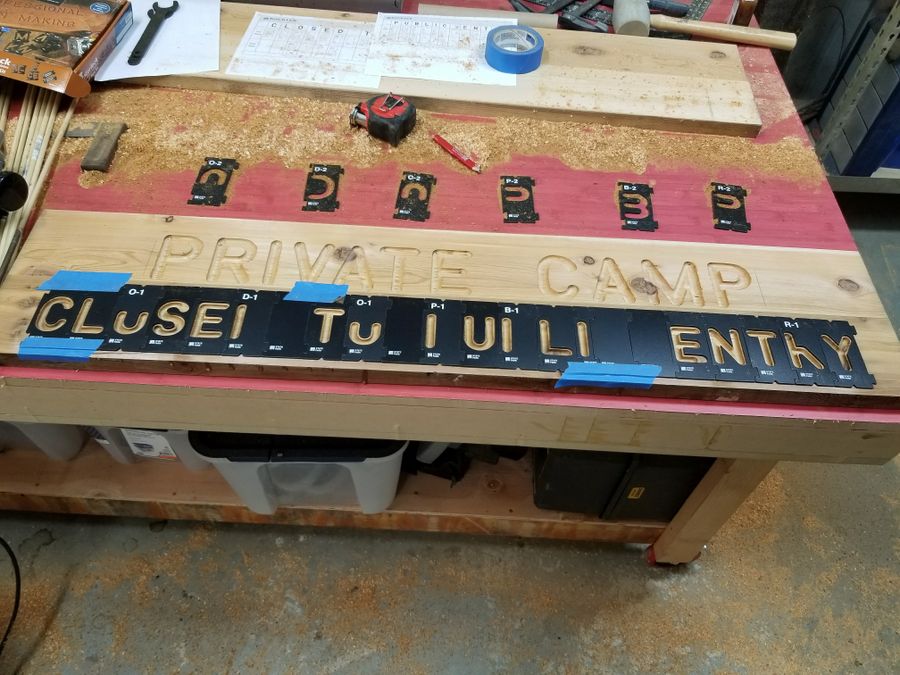 Any letter like a P with an inside part has to be done in two passes.  As long as you tape things down well (I use double sided tape and the blue tape) then things line up really well because it all interlocks nicely. 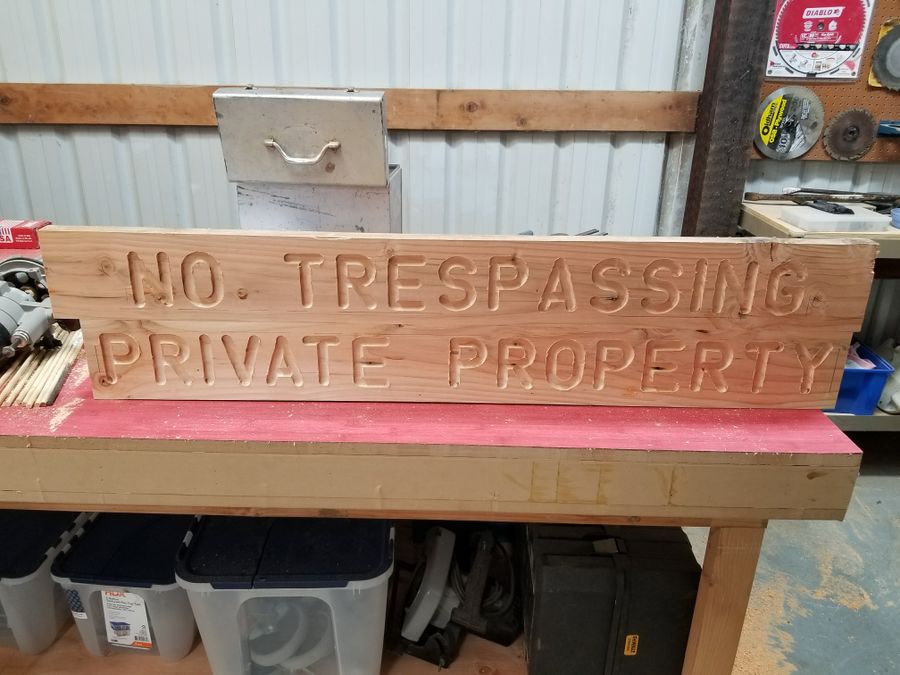 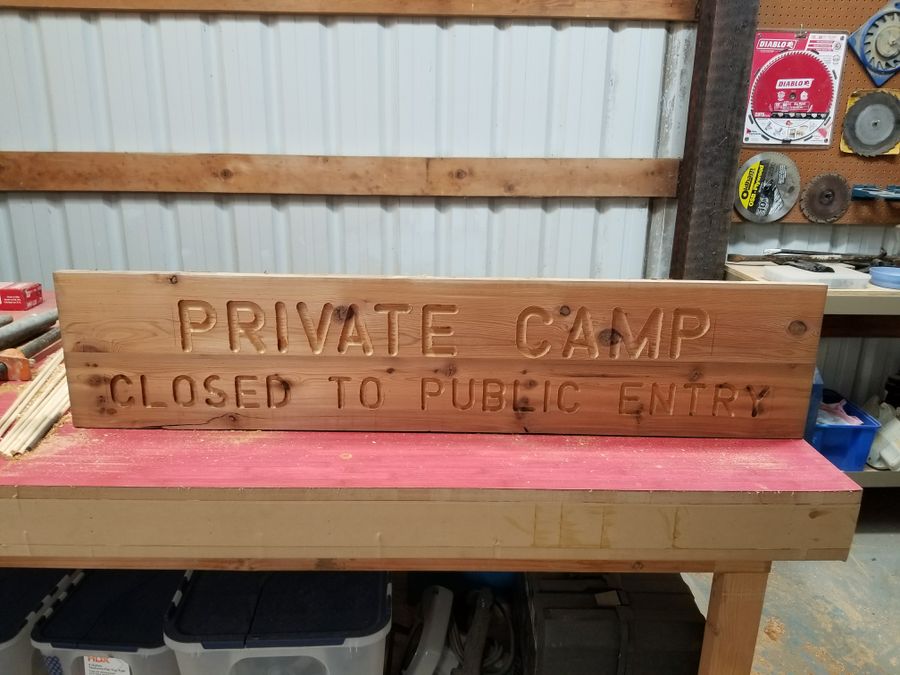 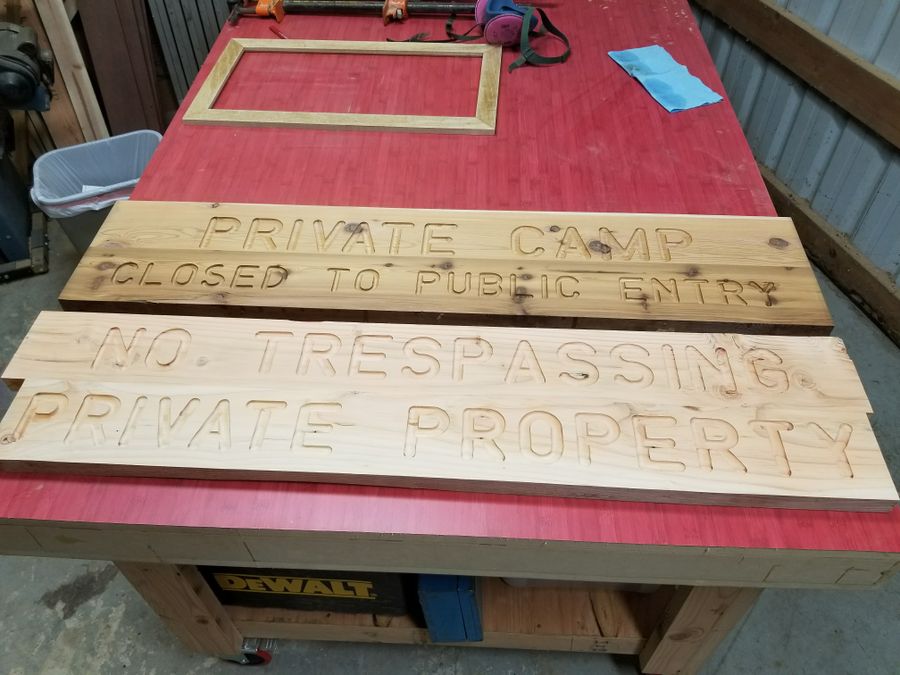 About ready to paint the letters.  I wish I had purchased some epoxy to fill cracks, knots, and nail holes at this point.  Will do that next time for sure. 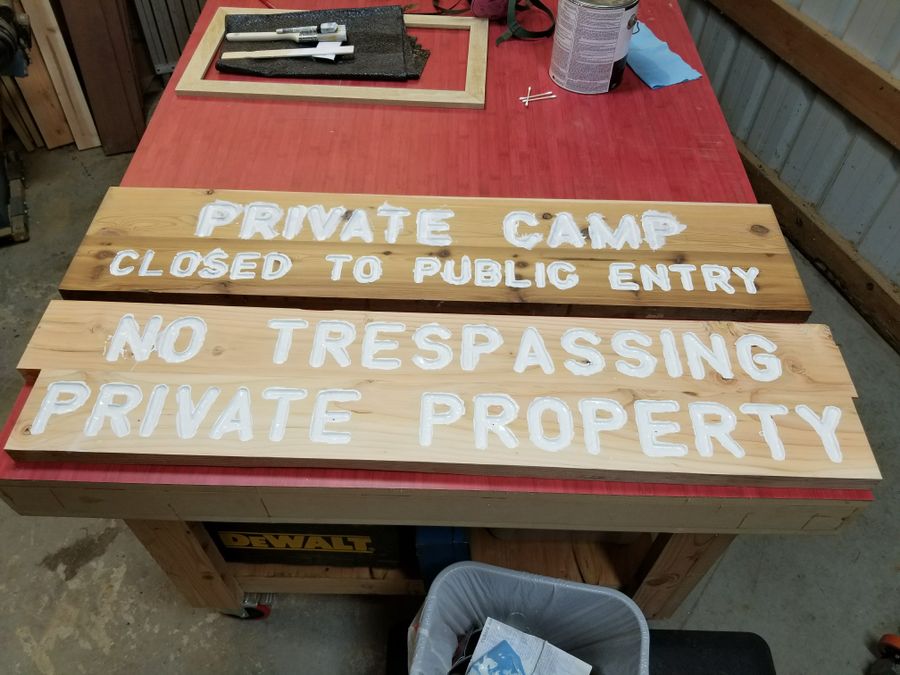 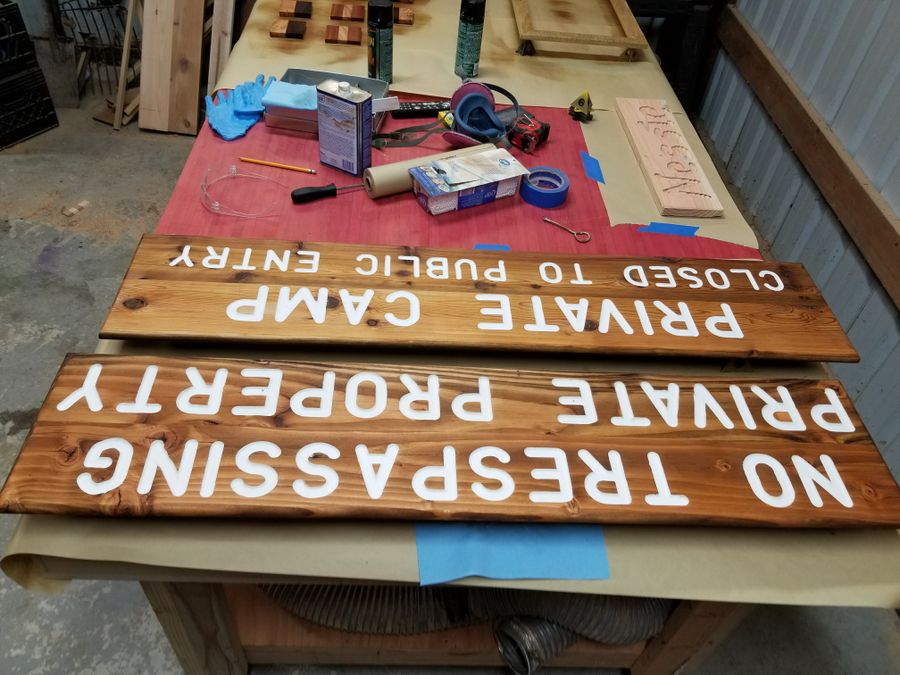 The No Trespassing sign is stained and both have one coat of finish.  I went with Ephanies Rapid Clear as I wanted to try it out for a future project of re-finishing some teak furniture, plus I figure these signs needed some good protection anyway.  I ended up putting on a total of 5 coats, doing 3, then lightly sanding the entire thing before two more coats.  I just used a foam brush, but wish I could have sprayed (my spray area isn't set up yet from moving) as some of the pigment from the staining seemed to lift to the foam brush I used for finishing and was really tinting the letters.  I was able to clean it up with a shop rag and some mineral spirits though. 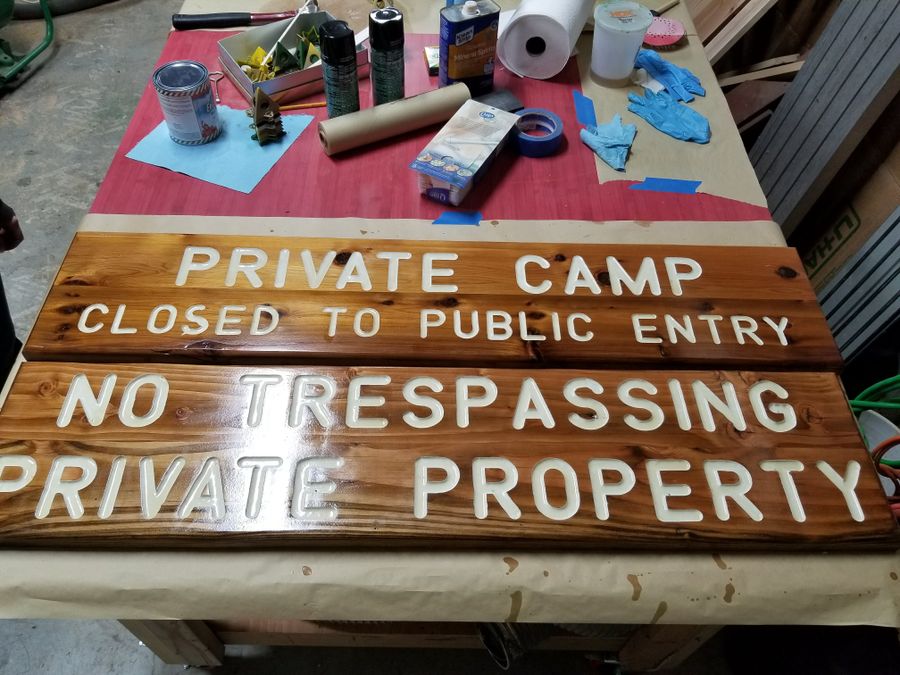 Finished product, really happy with the look of the Ephanies and how it brought out the color of the wood.  Only time will tell on how it holds up, but I suspect its as good as people claim it to be. 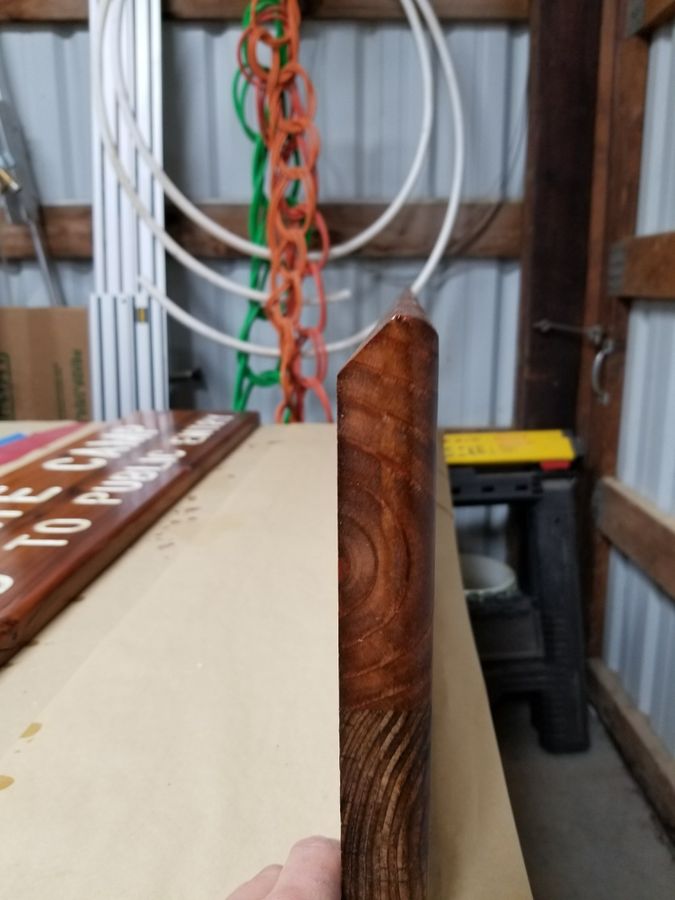 I ended up rounding over the front of the signs with a large round over bit, and then came across the back of the top with the table saw to cut a slope so water wouldn't pool on the top of the sign.  I figure if I can promote the water to not pool then the sign will do better long term.

I never would have thought of drum sanding or planing after painting the letters. thanks for the idea!