Coffin For My Cat (Unplugged Woodworking)

My cat of 7 years was diagnosed with rapid terminal cancer back in July of 2017. He was given three months, and he's made it six. Little fighter with the power of snuggles. It's progressed to the point where he is just very sad and doesn't acknowledge us much anymore, so we're doing the merciful thing and putting him down tomorrow. He's never been a depressed cat, so we know it is finally time to say goodbye.

I wanted to make him a coffin, so here it is. 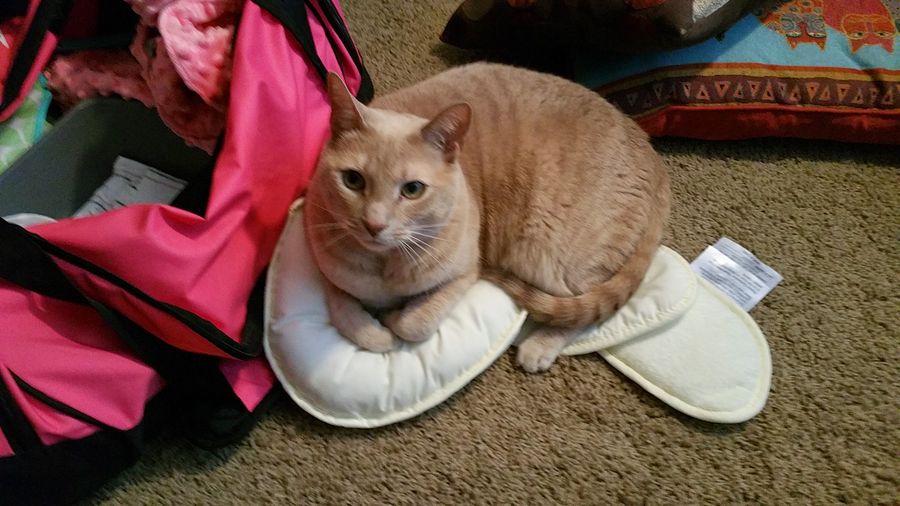 Yoyo has always been a goofy little Siamese. We adopted him and our other cat from a shelter when they were 4 months old. They were born the month before we got married, so they've been a part of basically our whole lives together. He's my wife's buddy even more. They snuggle on the couch while she reads or naps. 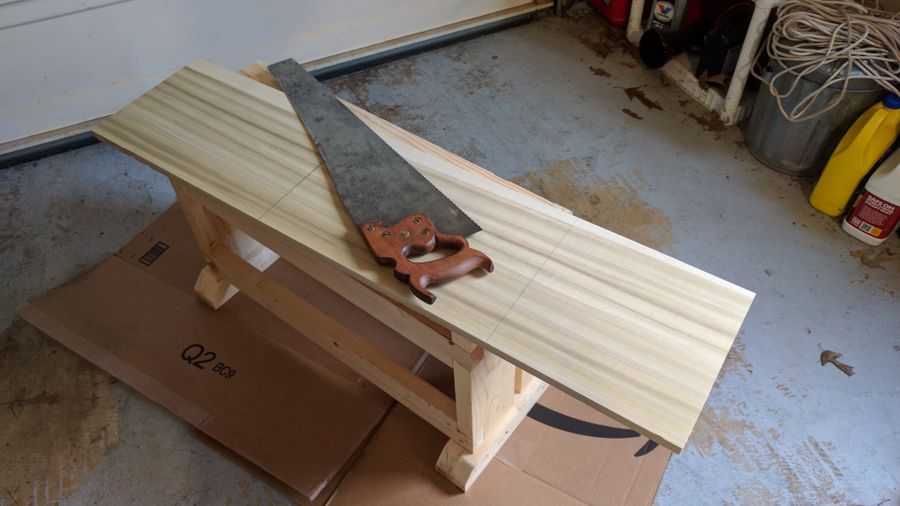 I was originally going to do a box in the classic pine for a coffin, but this poplar stood out to me, particularly the purple streaks you'll see later. While I normally get wood from the lumberyard, I got these from HD because of both time to get to a lumber yard and time to surface. 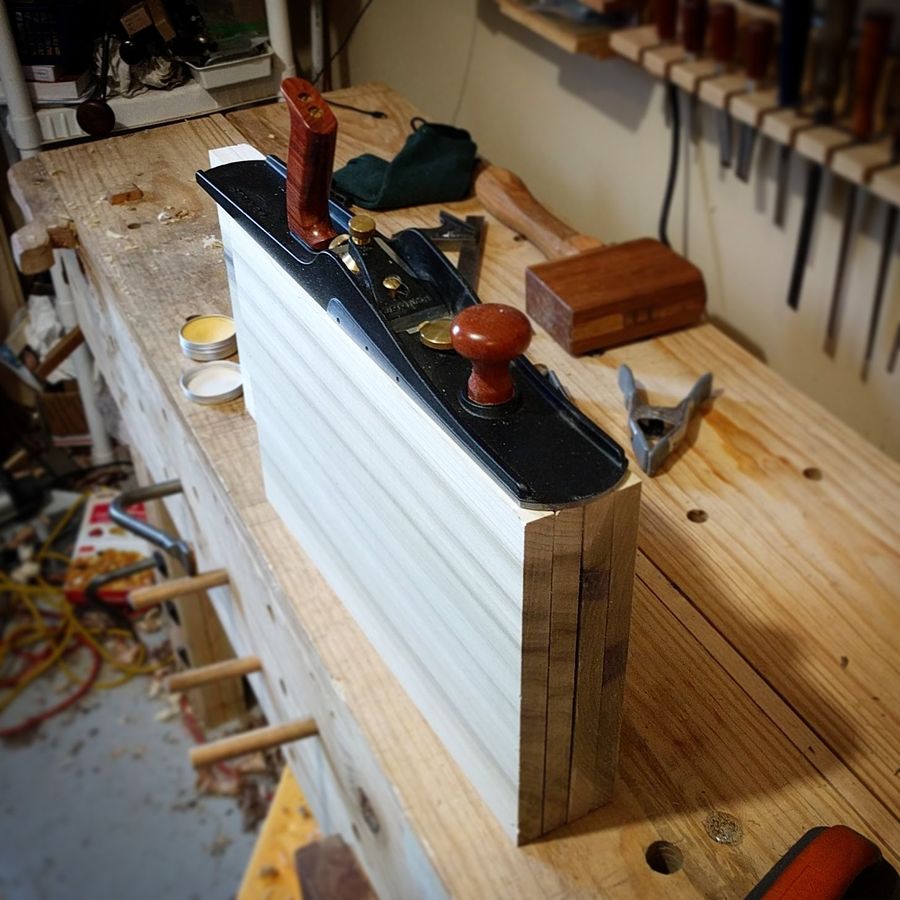 Square up the boards. 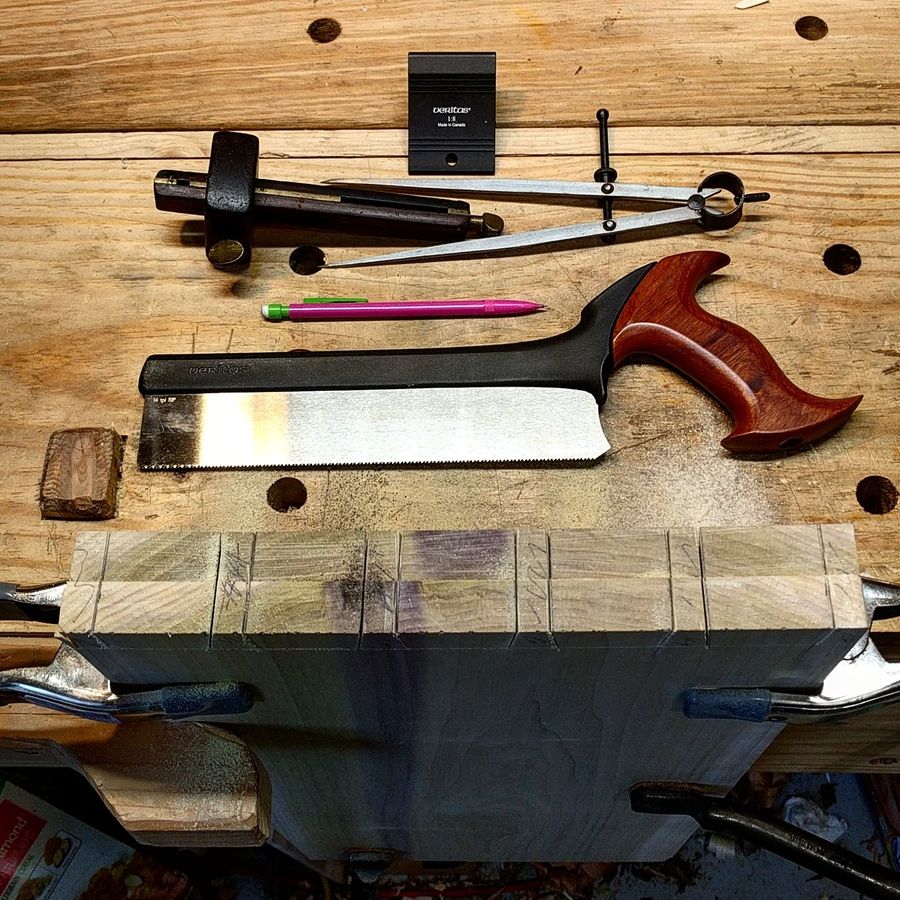 I was originally going to cut rabbets (grooves on the edge) and glue, but took the opportunity to practice my dovetails. 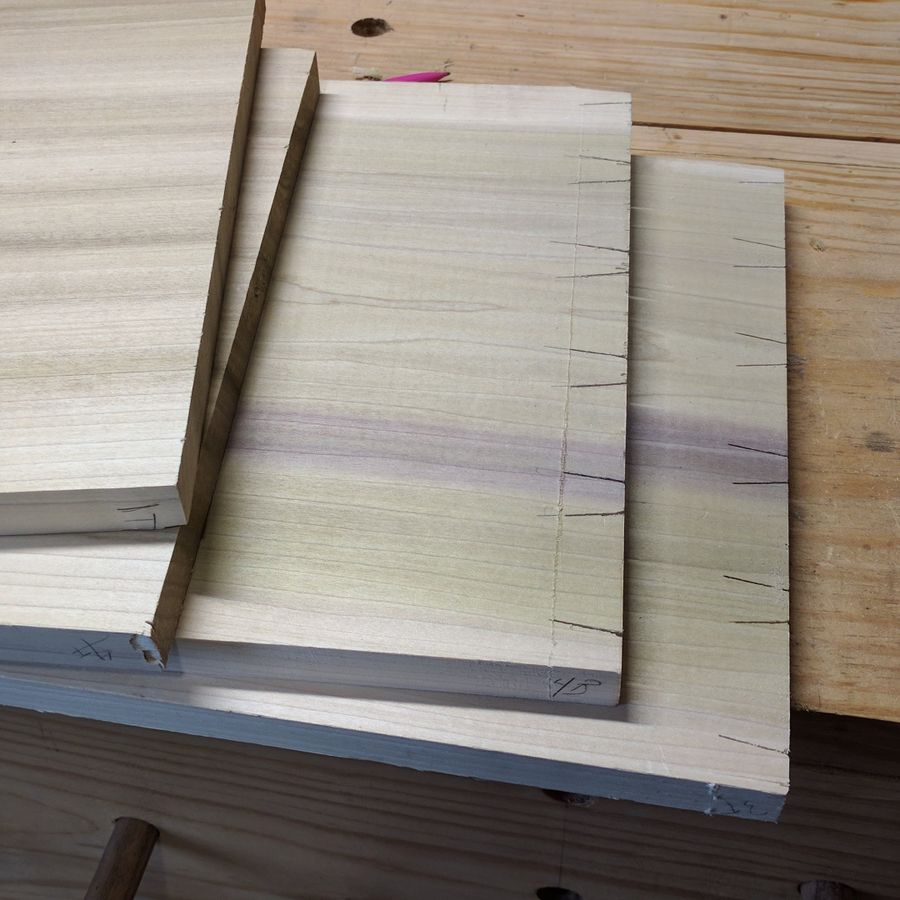 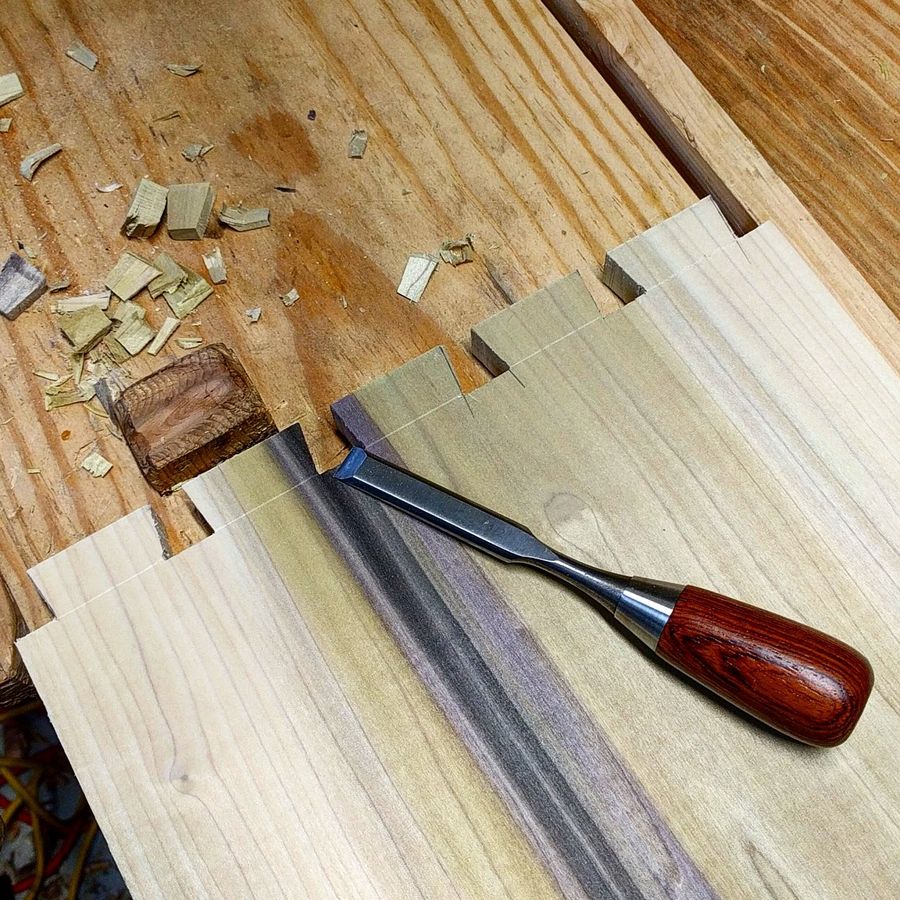 I pare the inside baseline a bit, then I flip the board and hammer straight through. 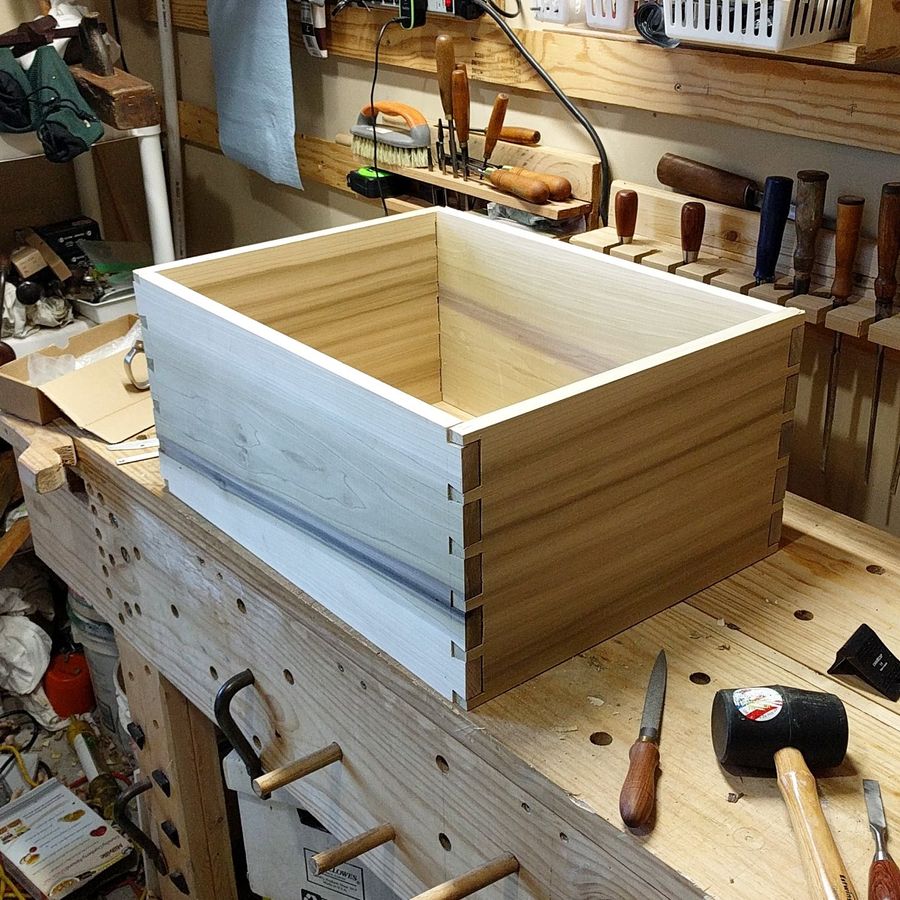 Dry fitting to test. They're pretty gappy, but I don't have a lot of time to finesse. It's not a show box. 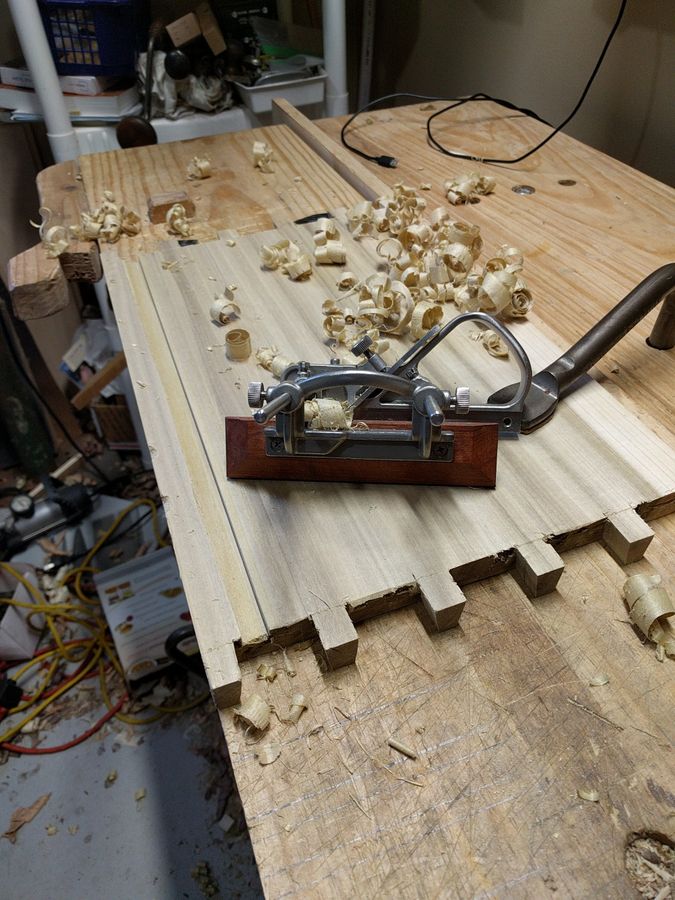 Using the LuBan 043 plane to make grooves for the ply bottom. 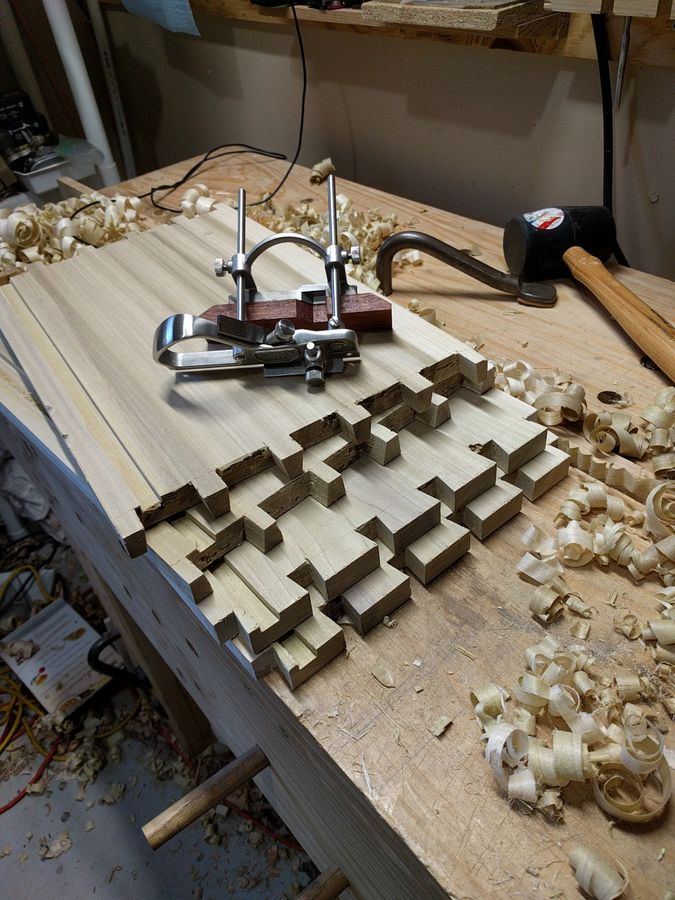 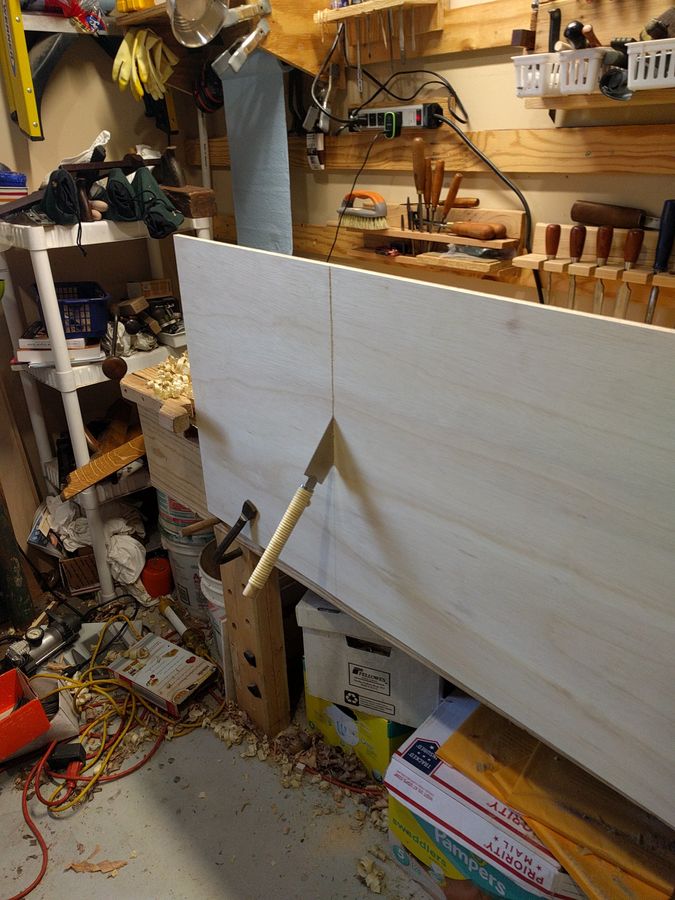 Cutting the bottom. I like to use the hardened-teeth Japanese saws for ply, so I don't dull my nicer saws. Also the smaller kerf helps reduce tear-out. 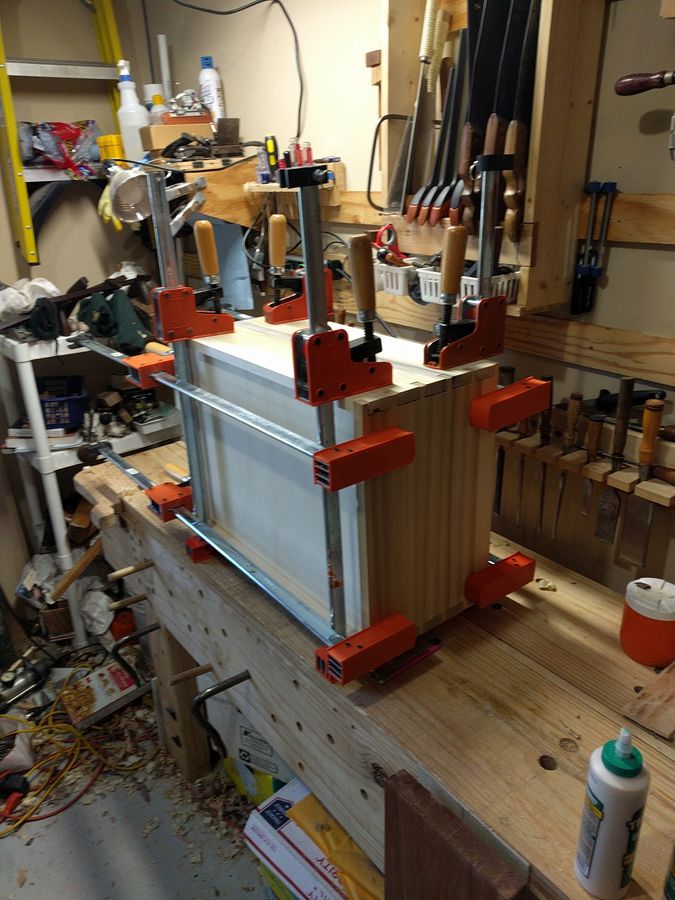 Gluing up. Love my Jorgensen cabinet master clamps; collected them from Craigslist and eBay. 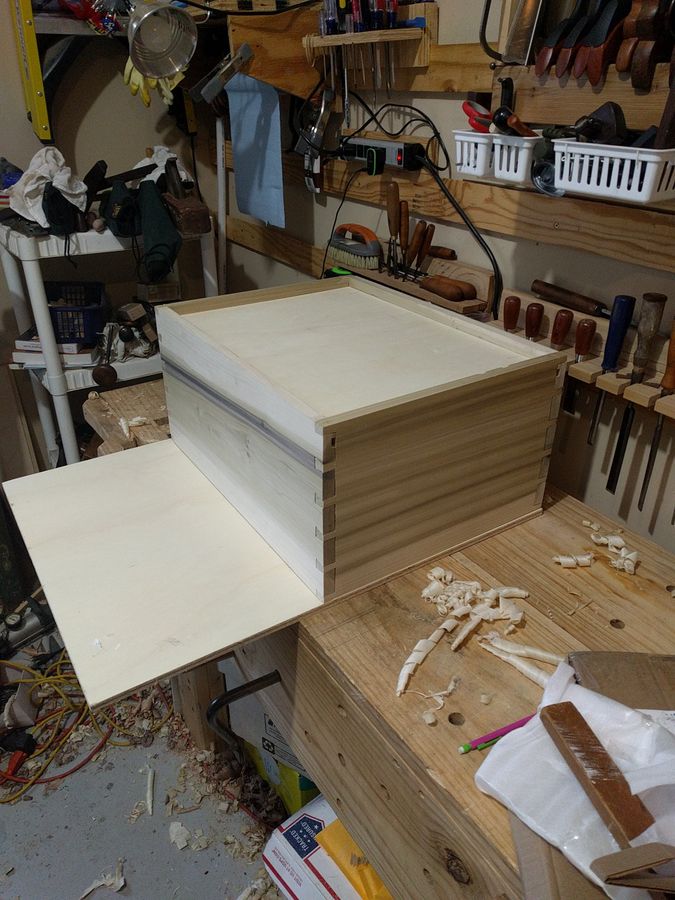 Sizing the top. The less numerical measurements, the better. 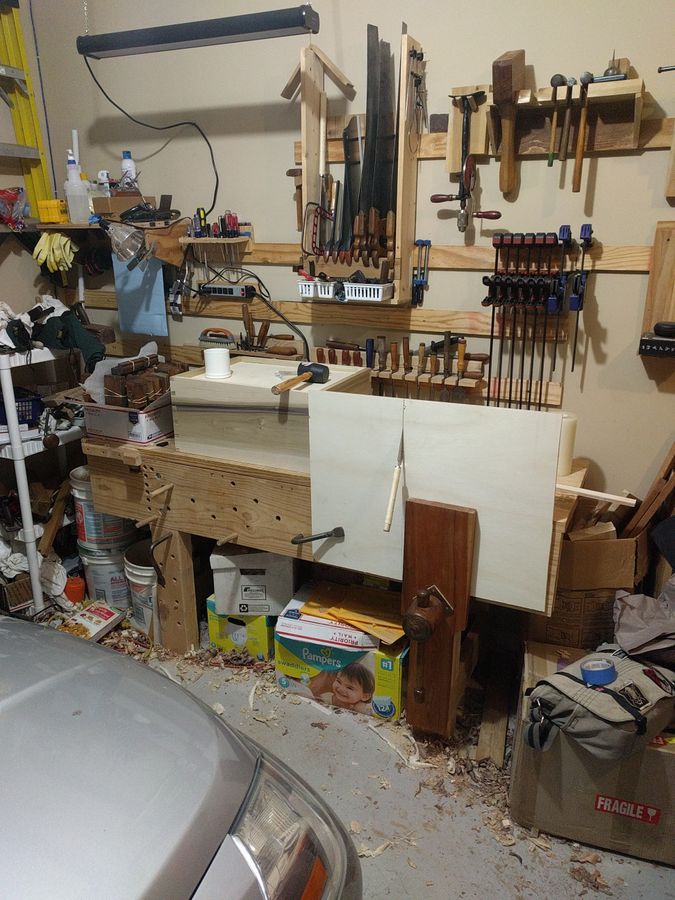 Cut it this morning. 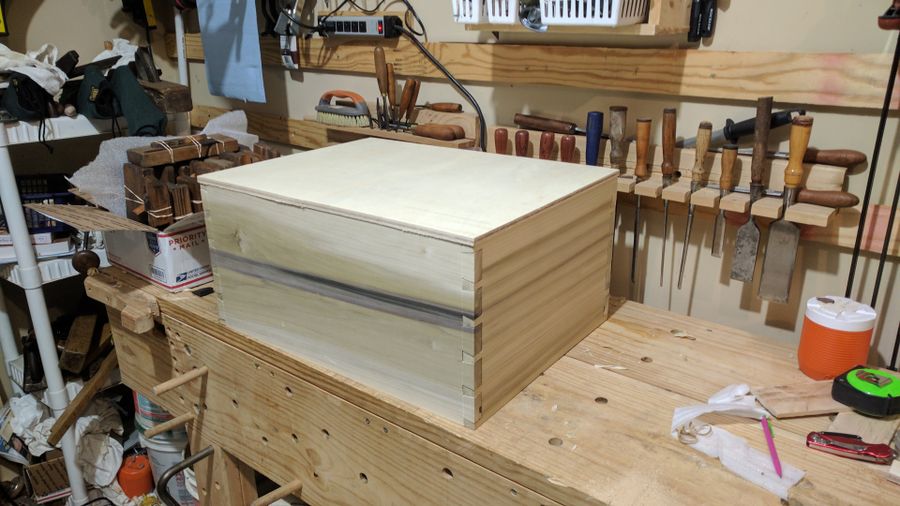 Good enough. I don't need a perfect crisp edge for this. 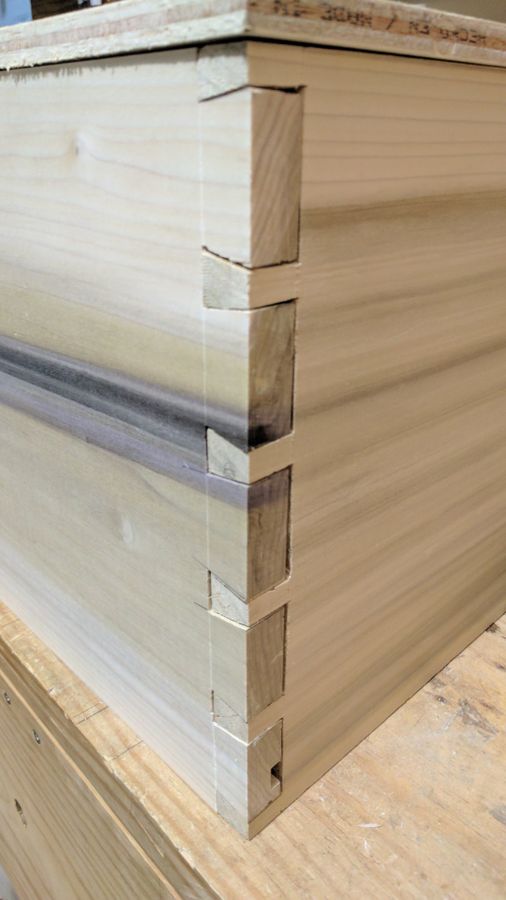 Gappy dovetails. That's why I practice. 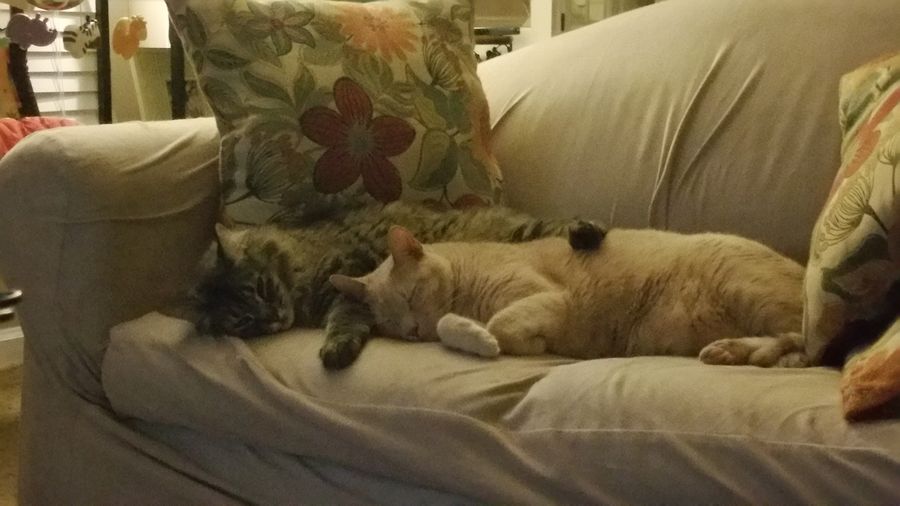 Yoyo and Ellie, our other cat (maine coon). While they aren't siblings, we adopted them at the same time and now they're snuggle buddies. We think Ellie will be ok after Yoyo's passing, she's fairly independent. If it were the other way around and Ellie had cancer, I think Yoyo would have a hard time dealing with it. 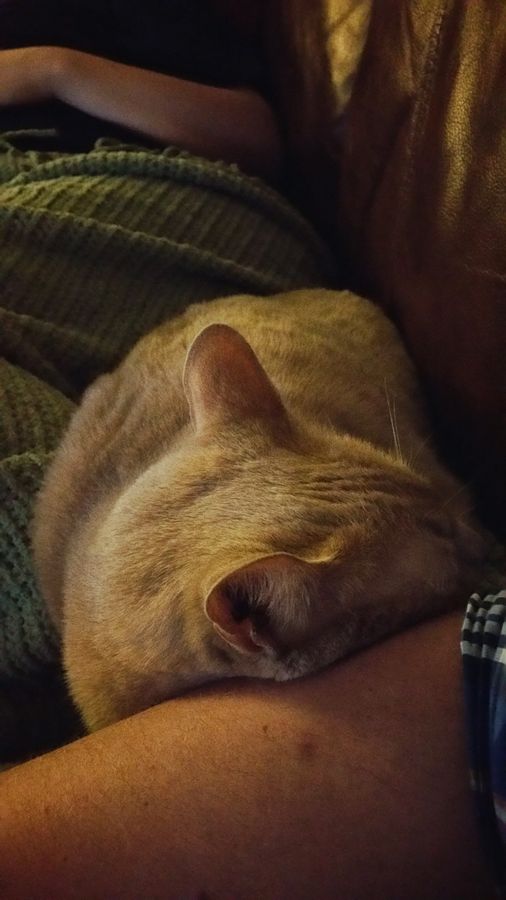 We call him "mom and dad cat" because he always wants to be between us on the couch. 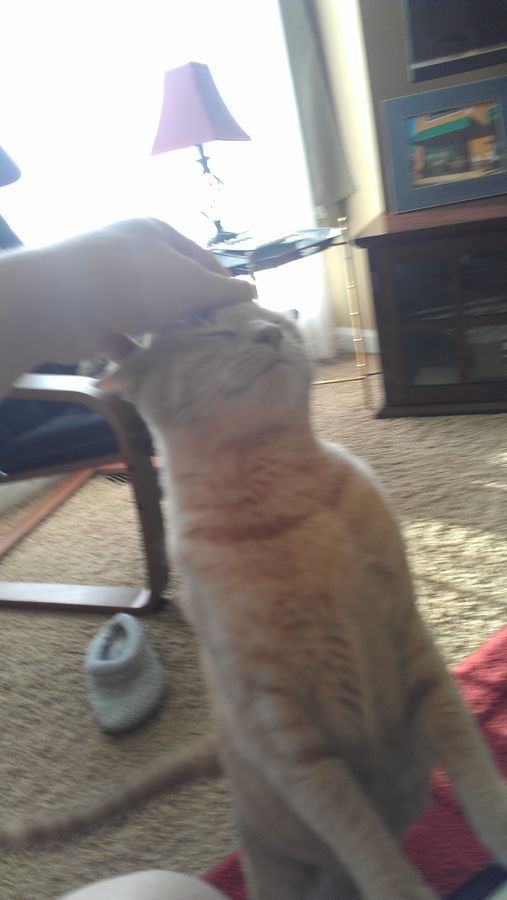 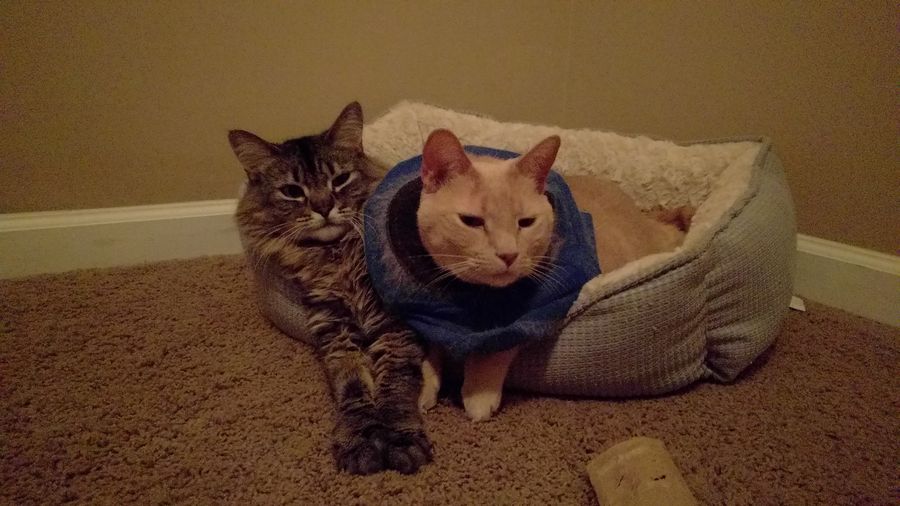 Back around Christmas. Cone to keep him from messing with the sports wrap we used once the wound opened up. 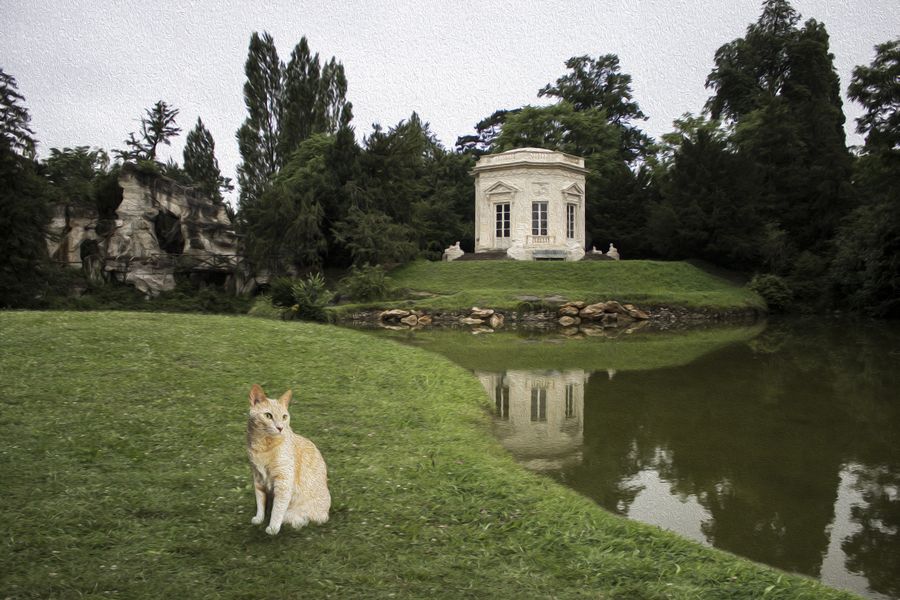 My wife, several years back, was asked to picture a perfect moment, in a perfect day. Her vision of peace. She'd always think back to our trip to Versailles, and Yoyo would always be there with her.
For Christmas, I photoshopped Yoyo in one of my pictures from Versailles and canvas printed it so we'll have that moment.