This floor lamp is roughly based on vintage Danish Modern and Danish Modern inspired designs, it was designed to fit a need for lighting in my living room.  Lamp stands about 6'5.  It was made from 2 pallets that I found by the roadside.  I made the shade as well; it needed a huge shade to look right, and shades that size (18" x 27")  just aren't readily available.

Much more detail about the build can be found at:
http://thecosmicranch.com/retro-pallet-wood-floor-lamp/ 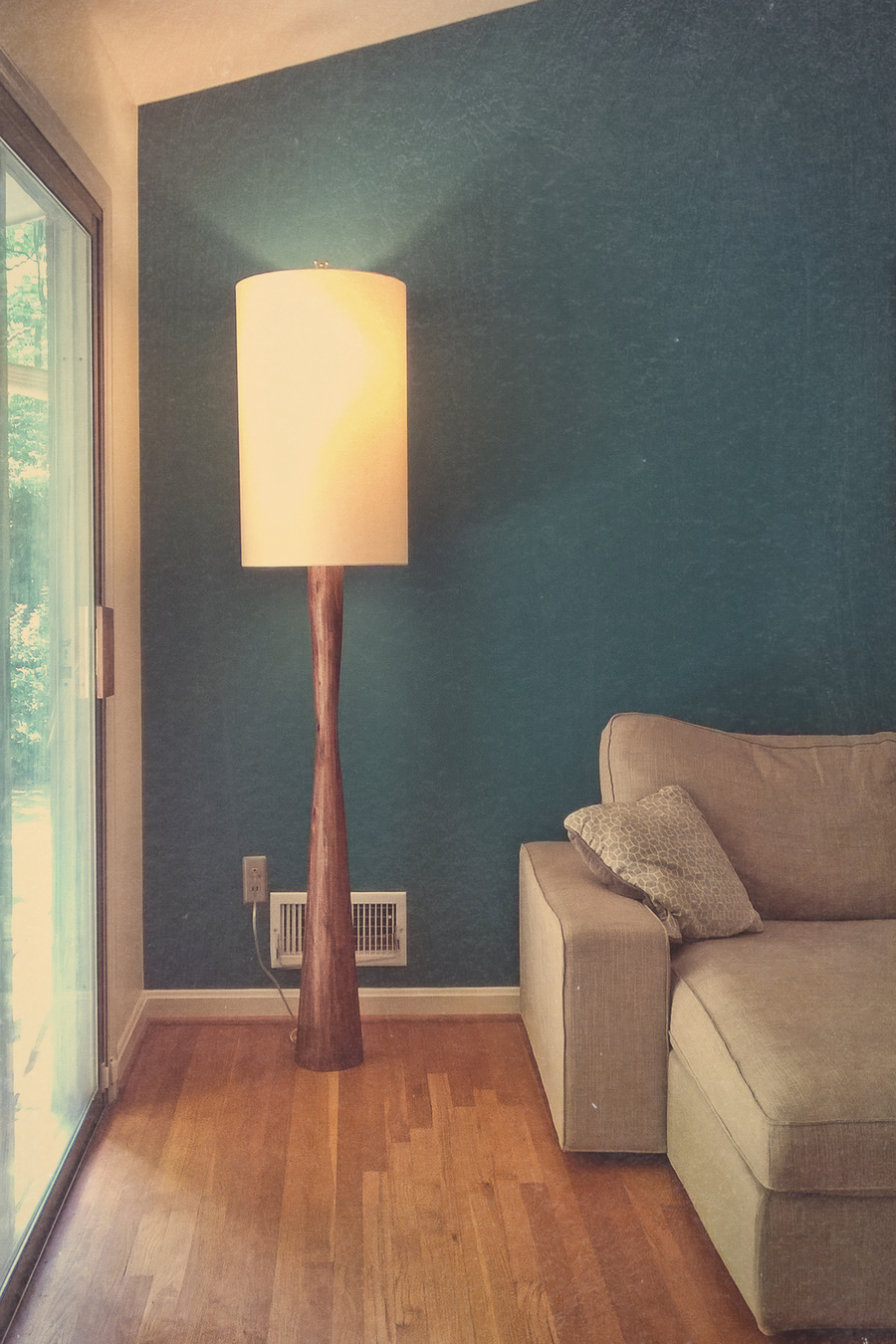 The finished lamp in its final location. 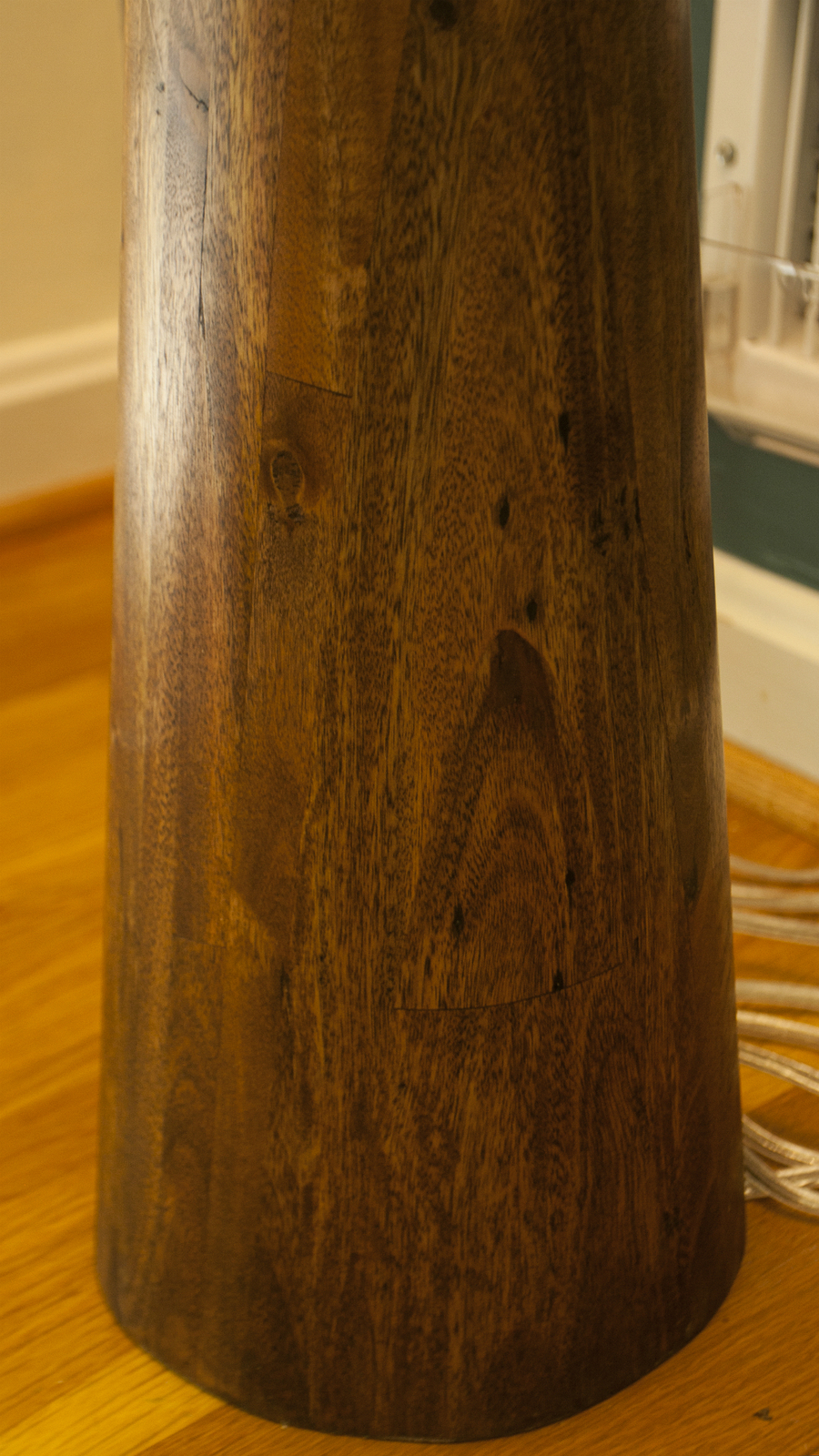 Closeup of the wood used.  I have no idea of what sort of wood it is, a tropical hardwood of some sort most likely.  The pallets had an origin stamp from southern China.  You can see a few of the imperfections that were picked up in the wood's former life as a pallet, however being reclaimed pallet wood was not a design motif so the rougness and imperfections were minimized as much as possible. 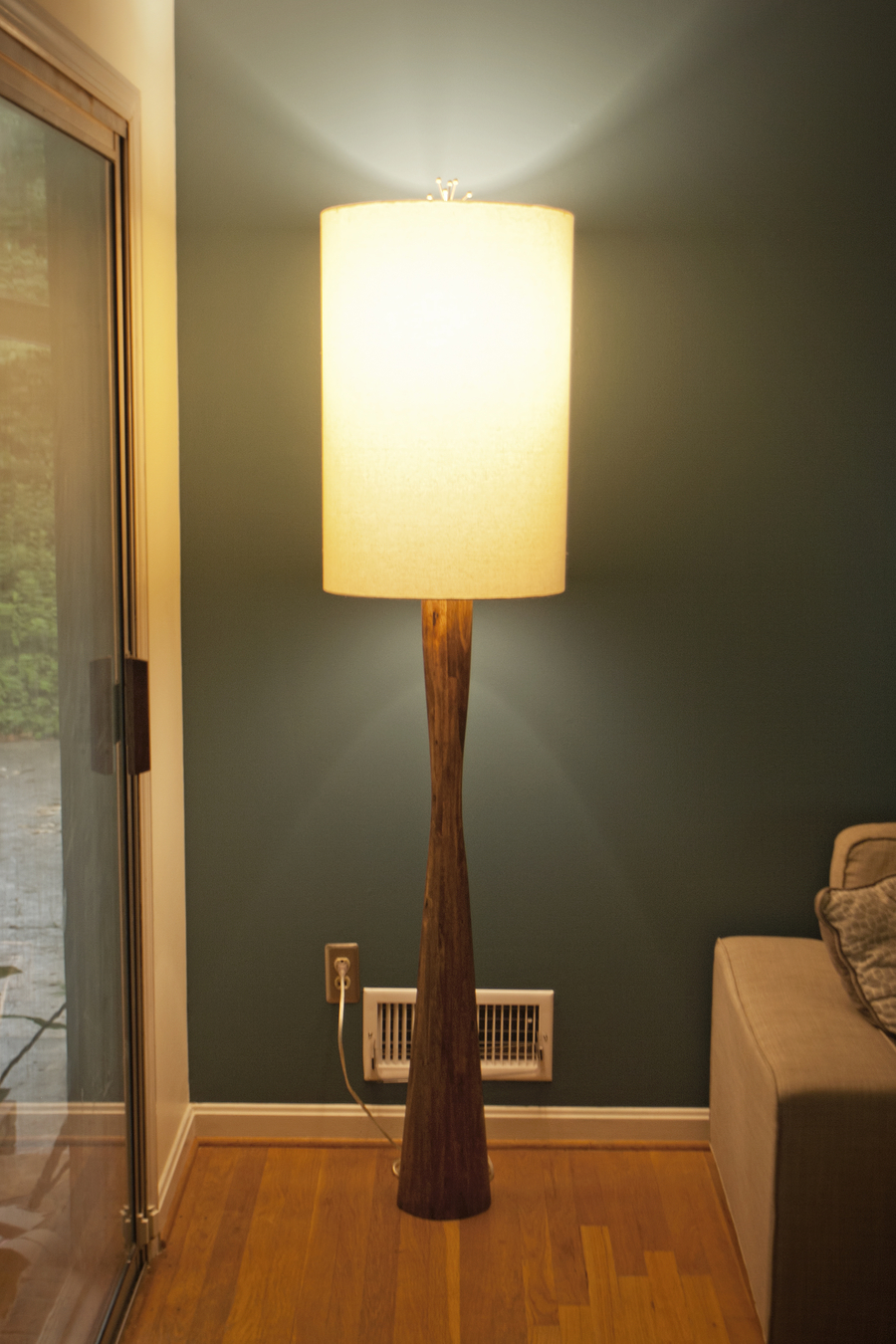 Another shot of the finished lamp in its final location. 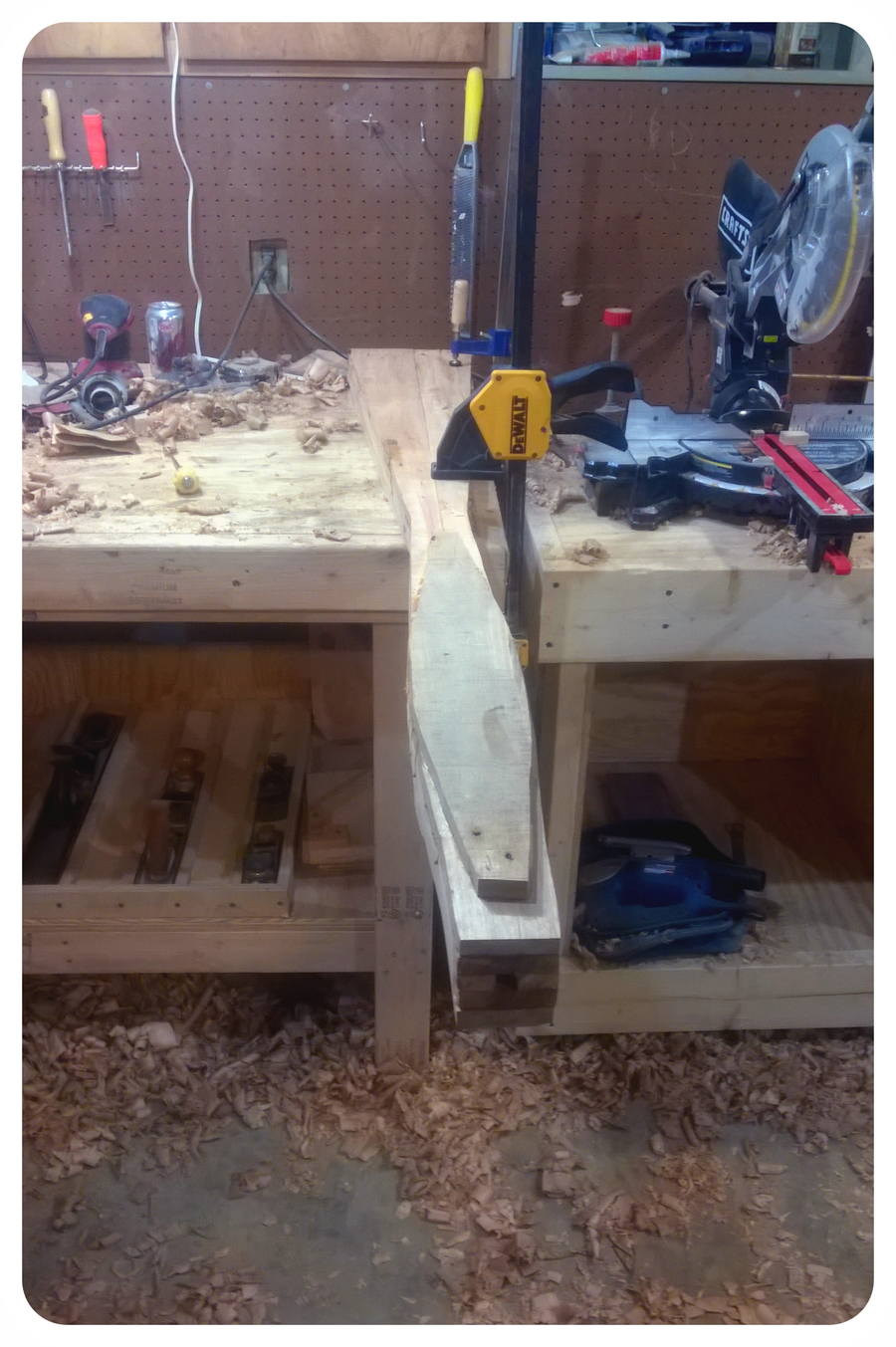 The lamp was built layer by layer by laminating boards from pallets cut to the rough contour on the bandsaw.  Handplanes were used for board prep except for butt joints, which were cut on the miter saw. This was shot right before I started shaping the top portion.

Every layer but the last few had butt joints because the lamp is taller than a single pallet slat.  Edge joints were needed as well because it is wider than a pallet slat.  In total it almost completely consumed the slats from 2 pallets.

The lamp was built from the center out symmetrically, adding a layer to one side then the other.  The middle layer had to be split with a gap so that threaded tube could be installed for a wireway and to mount the socket and harp. 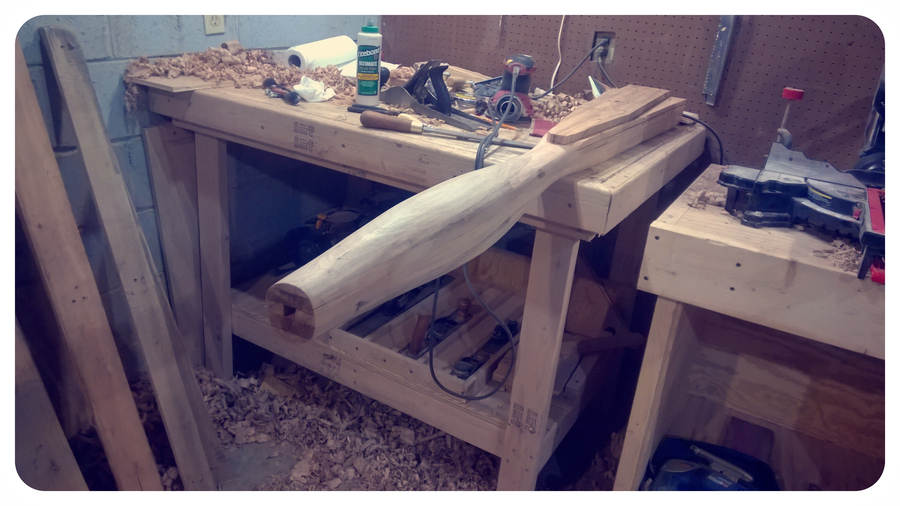 Shot after some shaping had been done.  Because the laminating process was so slow (I basically had to glue it board by board, and each layer was 3-4 boards (there were 15 layers total)) some shaping was done as gluing progressed.  Shaping along the way also helped to define what each successive layer looked like, as each layer was ad-libbed on the fly to match what I had in my head.

Shaping was done primarily with a rasp and spokeshave.  Once gluing was complete and I could fully shape the base, I also used my jack plane to keep the sides straight(ish) and the belt sander to hog off material.  Smoothing was done with the orbital sander and by hand sanding.  This shape is actually quite easy to sand by hand.

After gluing, each layer was planed smooth using a jack plane prior to starting the next layer. 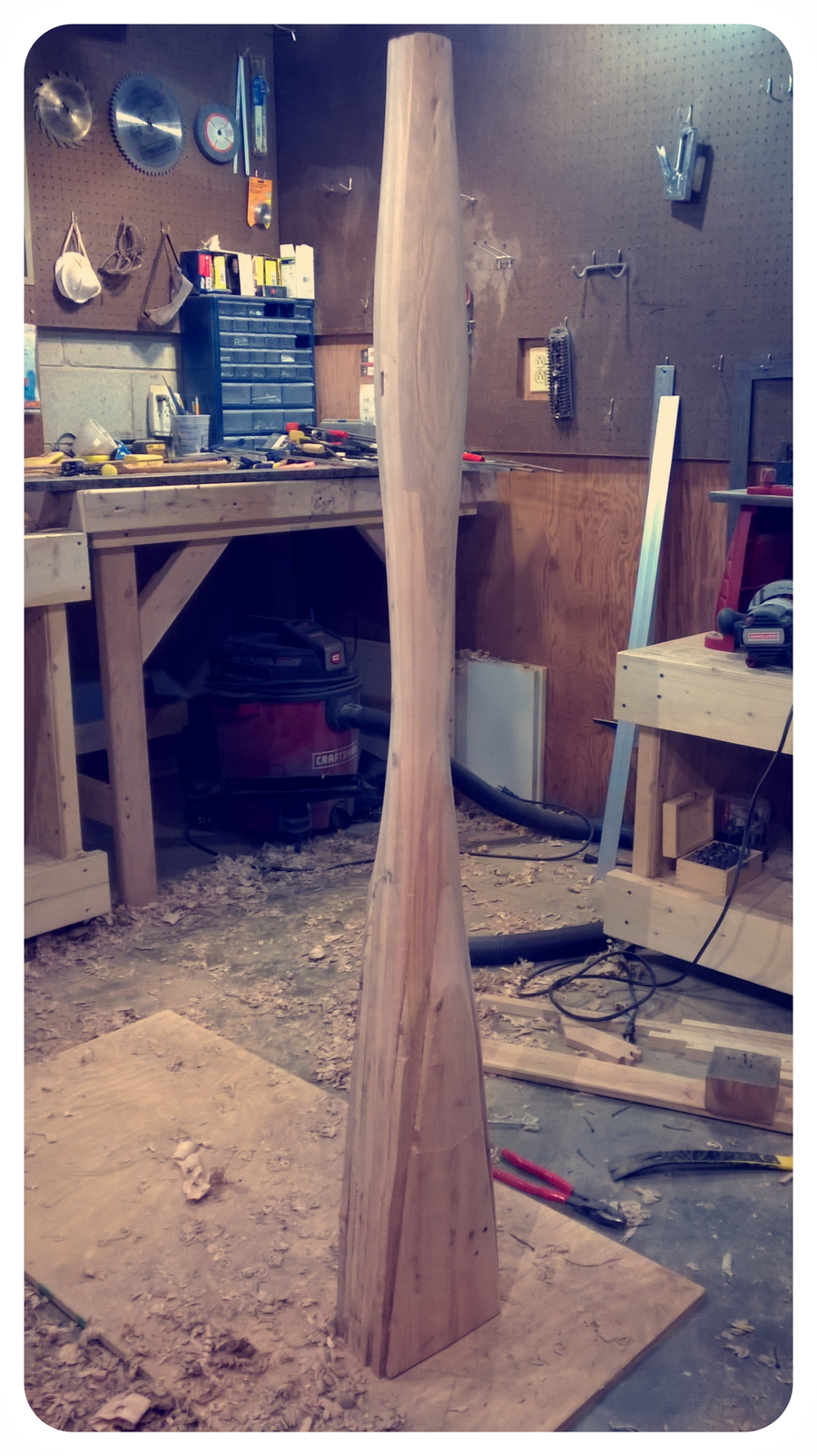 Getting close to the final shape.  This was taken right after I cut the bottom straight and perpendicular on the bandsaw.  I used a circle drawn on a board to define the contour at the bottom of the lamp.  For the most part, precision was not necessary at all, except for butt joints and edge joints matching boards together.

I tried as best I could to minimize the imperfections in the wood, especially the more egregious things like chips and splits.  Some nail holes and knots were unavoidable though.

The completed lamp base after finishing.  I really don't like the "rustic" reclaimed look where wood is left in a beat up state.  The wood was quite interesting in its natural state after final sanding, but the lamp was designed for a location where a more uniform walnut color would work best.

Prior to finishing, all of the imperfections that remained were filled with wood filler made from bandsaw sawdust and liquid hide glue.

For finishing I began by using a wood dye diluted with water to even out the color to a medium brown.  Then I used a couple coats of a walnut color danish oil as the primary finish.  Finally it was given a coat of furniture wax.