At the start of every year I write up a set of goals I like to accomplish in my shop, and this year I wanted to include my kids in some projects. I didn't intend on having them help out with this tote, but things worked out in the end. We have a play kitchen that has a shelf/tray where we keep the wood food sets the kids play with. The tray was way too shallow to hold all the food, which would just fall out after you slid it in place. The shelf was large enough to fit a bigger basket, so taking matters into my own hands was the only way. 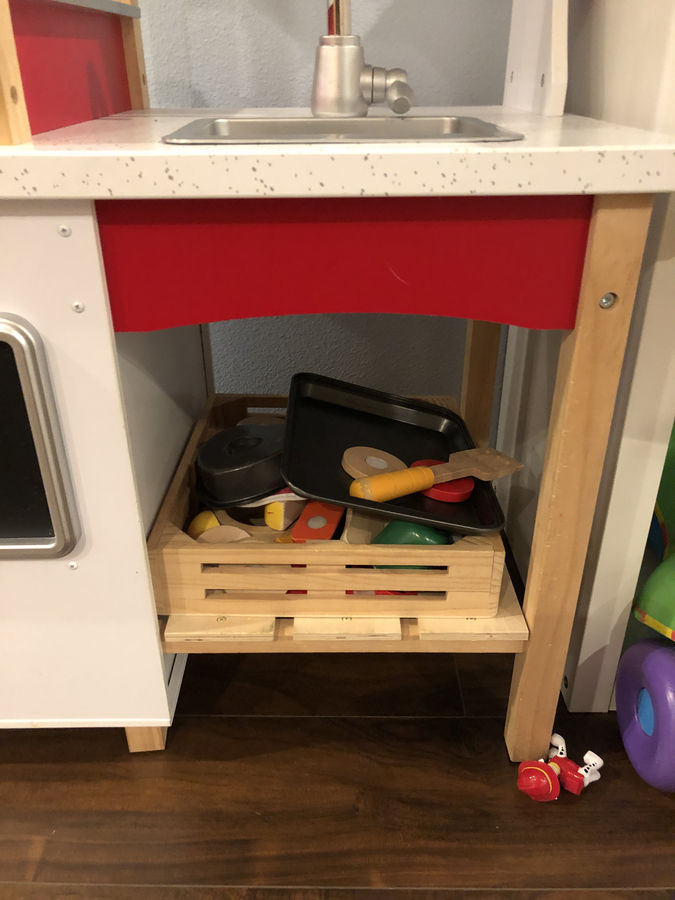 This is the starting point. We never really intended on keeping the crate, but it was a Melissa and Doug set and it contained the initial food set we bought. Over time with subsequent Birthdays/Holidays it was apparent that it would no longer suffice. I've also been bothered with how much space is wasted above the shallow tray. 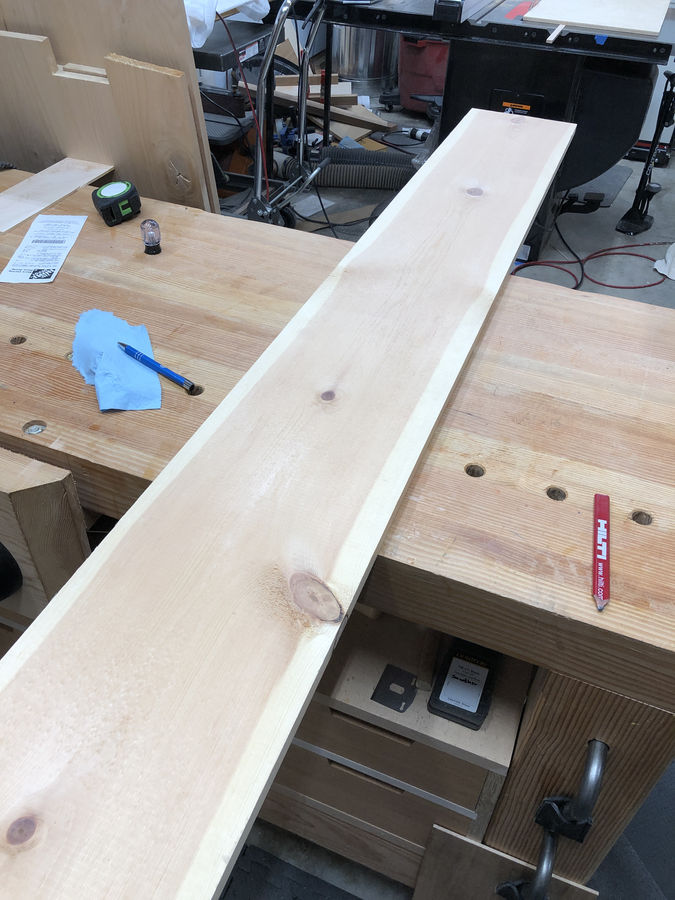 I've had this Home Depot pine 1x12 in my rack for at least a few years at this point. It was initially bought for the 18something School Box challenge as a second attempt, but I never followed up. Feels good to finally use the material, and it's mostly clear. 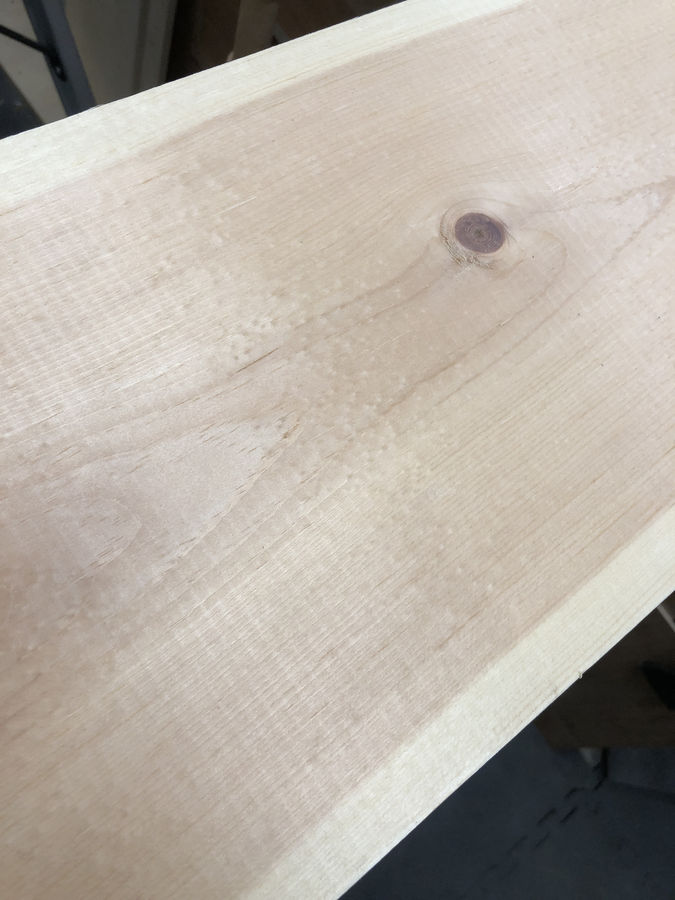 Looking closely there's also a little birdseye figure when you get the right light. Just the right stock for a kids project. :) 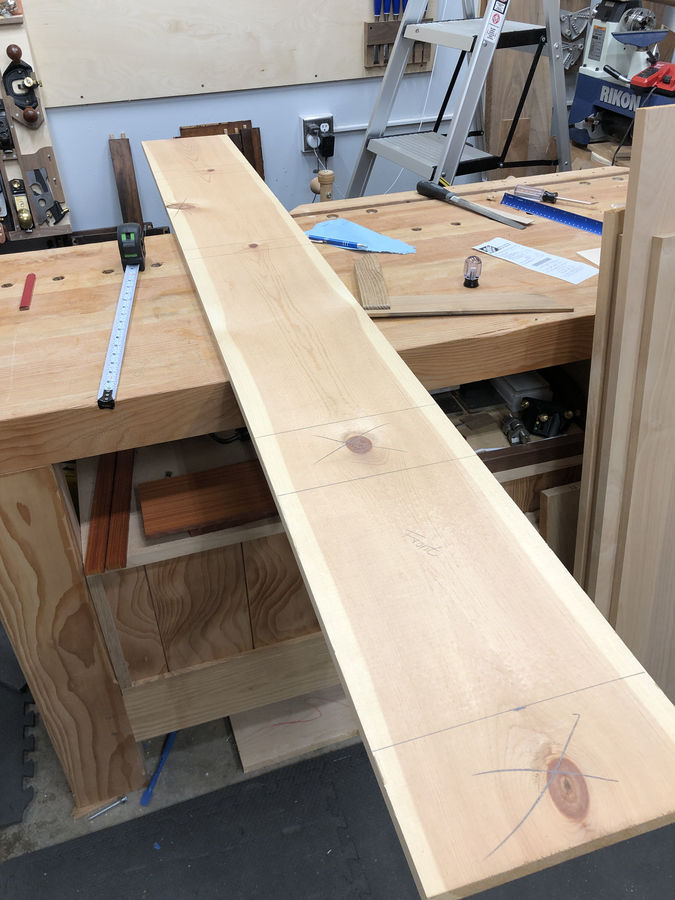 First was getting all the clear stock I can out of this board. I wasn't under any tight constraints by any means, so I just chopped out the bad sections. If there was longer pieces needed it would have been more surgical, but a hack job is good enough when materials on a project are low. 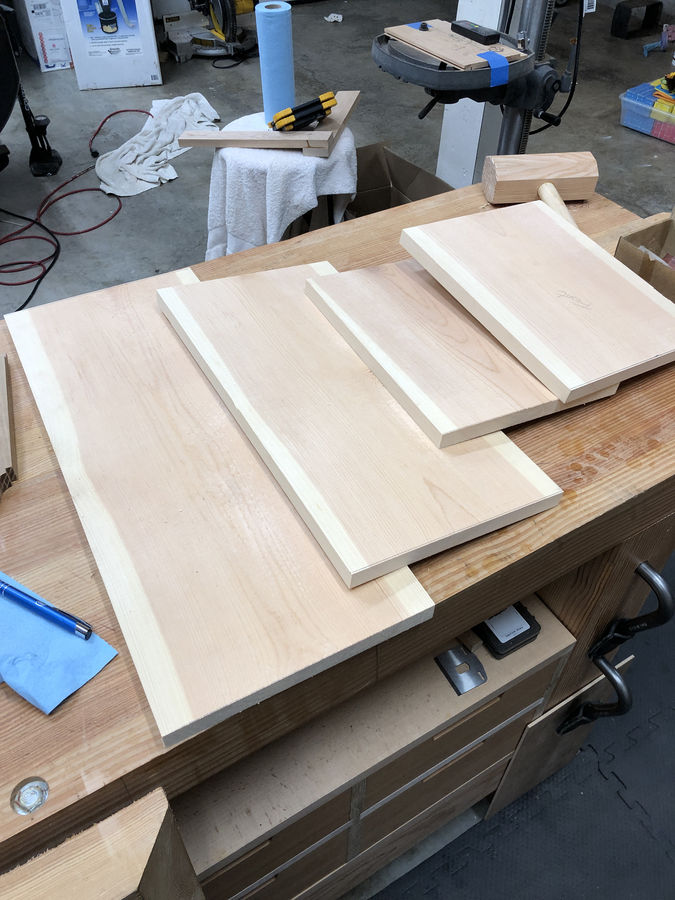 Good looking boards without those knots in the way. 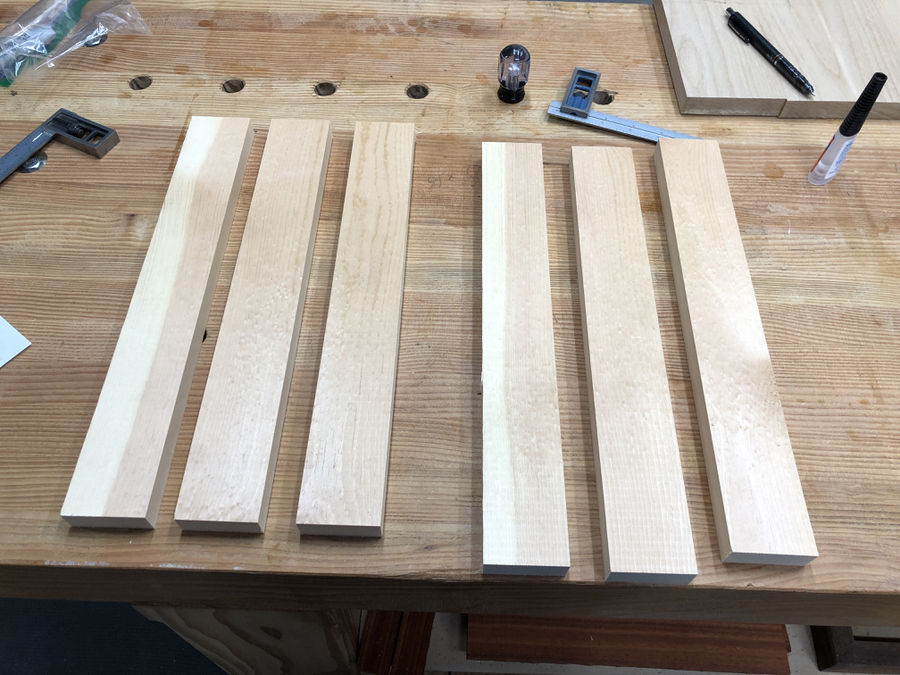 I really wanted the box to be light as the kids would be carrying it around, so pine was the first choice for material (no white oak for you!) I also wanted to remove material from the sides where I could, so I thought of doing some slats like the original tray had. 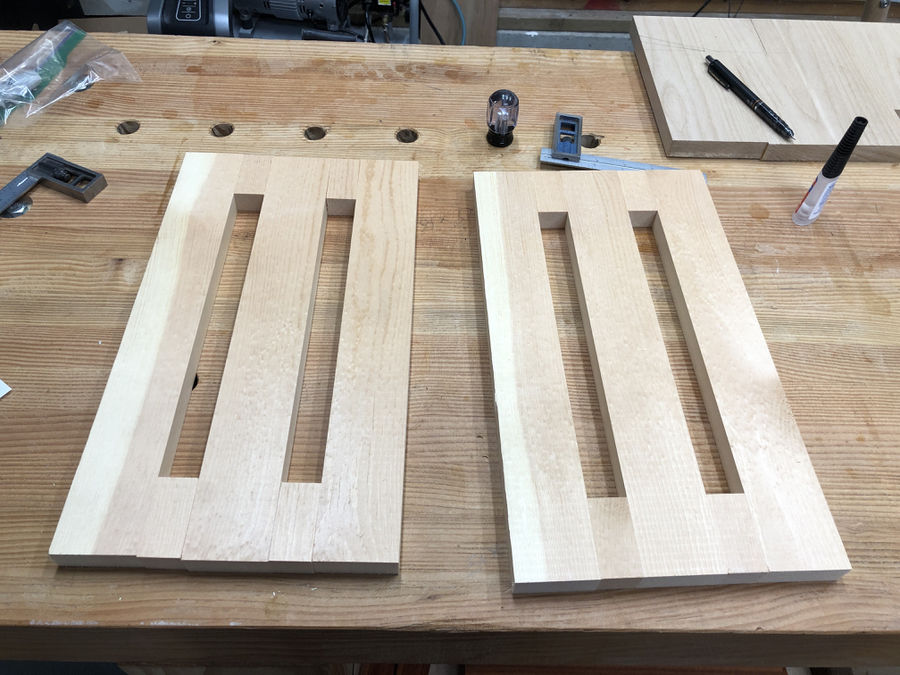 I wasn't worried about grain continuity, so I just got ripping with these 2" slats and followed up with a 1" spacer. On a more demanding piece I would have adjusted the fence for each cut. I didn't worry too much about alignment on the glueup as I was going to rejoint and thickness these pieces afterwards. I wanted to get as close to 1/2" on this stock as possible. 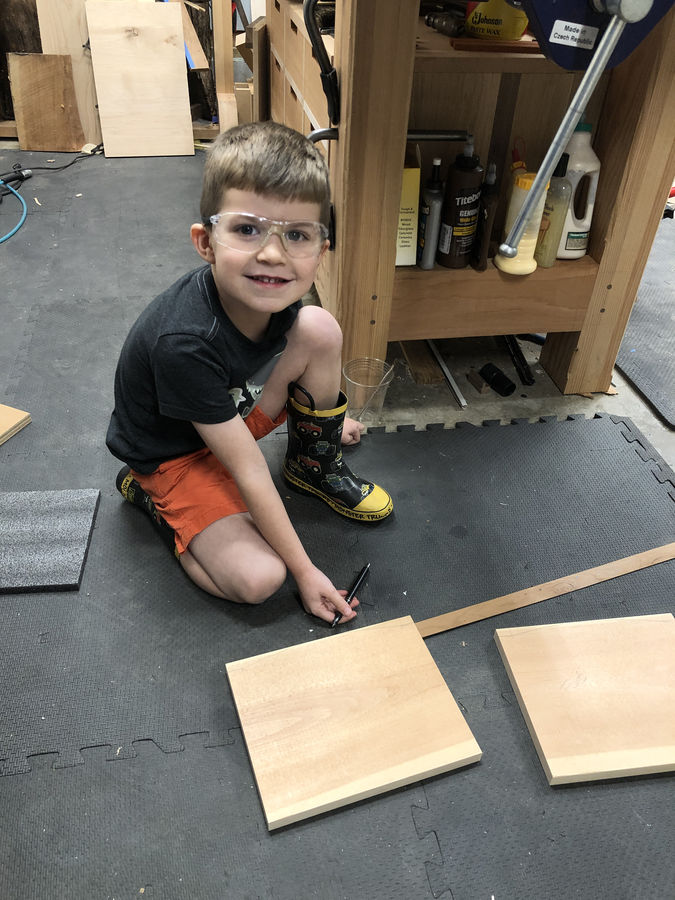 As mentioned earlier, I didn't originally anticipate having the kids help on the tote, but here we are! He helped me trace out the arc on the top of the end pieces while I held the piece of wood for reference. 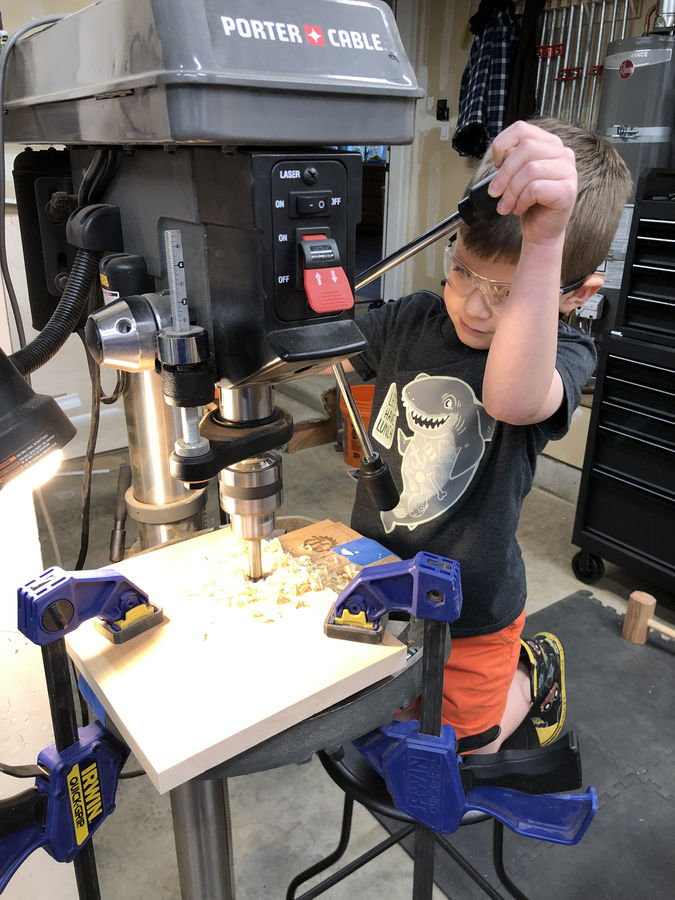 First power tool! He was a champ and was a good listener when I explained that we don't touch the bit when it's moving or after we've just drilled a hole. The pine was very forgiving and having a depth stop helped me stop worrying when he was at the bottom of the cut. I let him drill all 4 holes for the handles. I need to get him something to stand on as well. Kneeling worked, but it isn't as safe as standing on your feet. 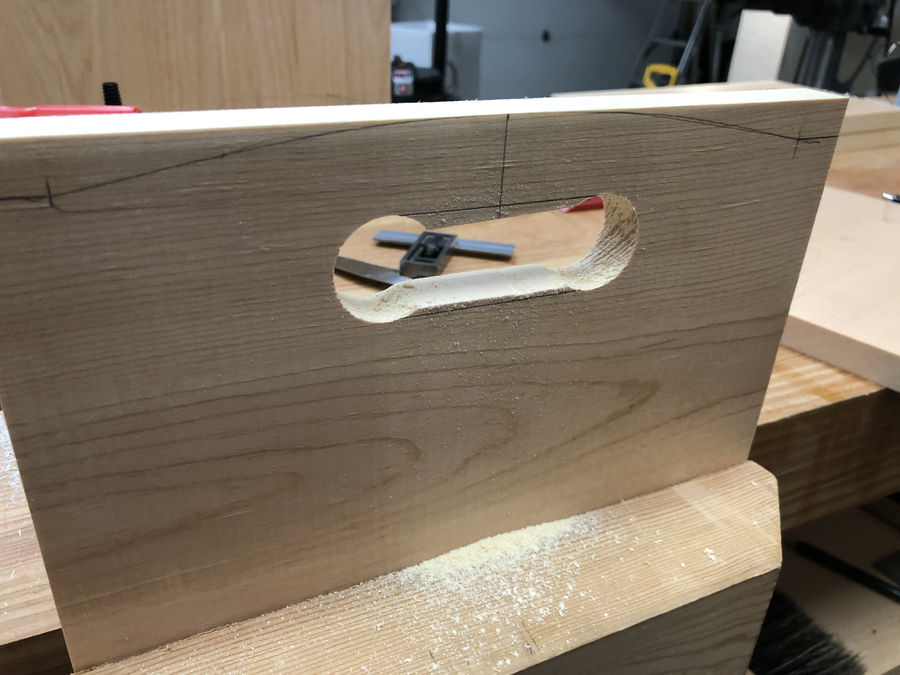 I didn't want to break out my coping saw to make the cut, so I just use my flush cut saw to get 90% of the waste out. 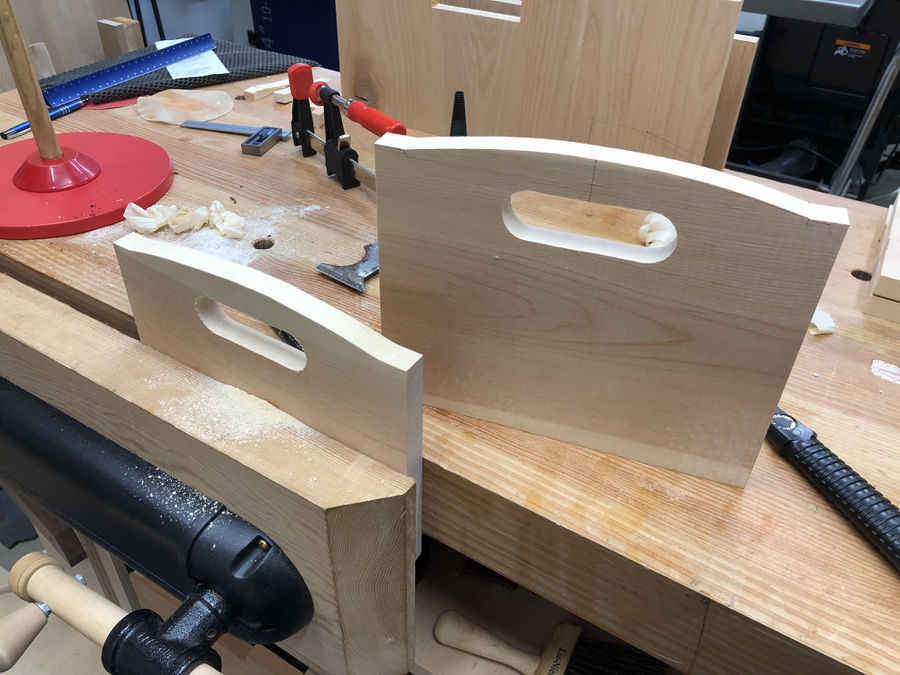 With the waste removed I finished cutting the arc on the top and brought everything to the line at the spindle sander. I forget how nice it is to work with pine. Everything moves along so fast, especially if I don't have to worry about sharp. ;) 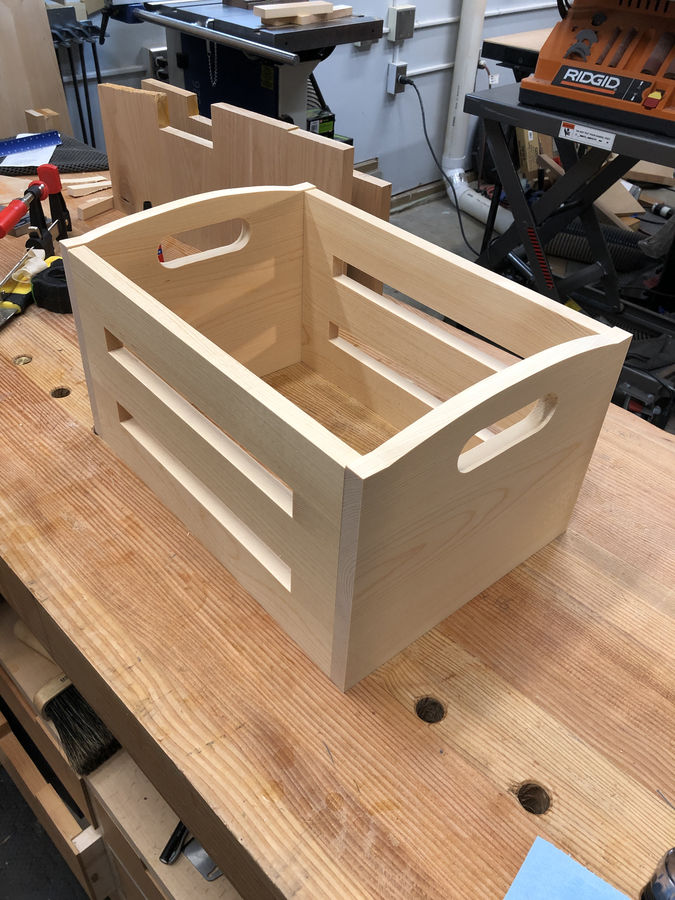 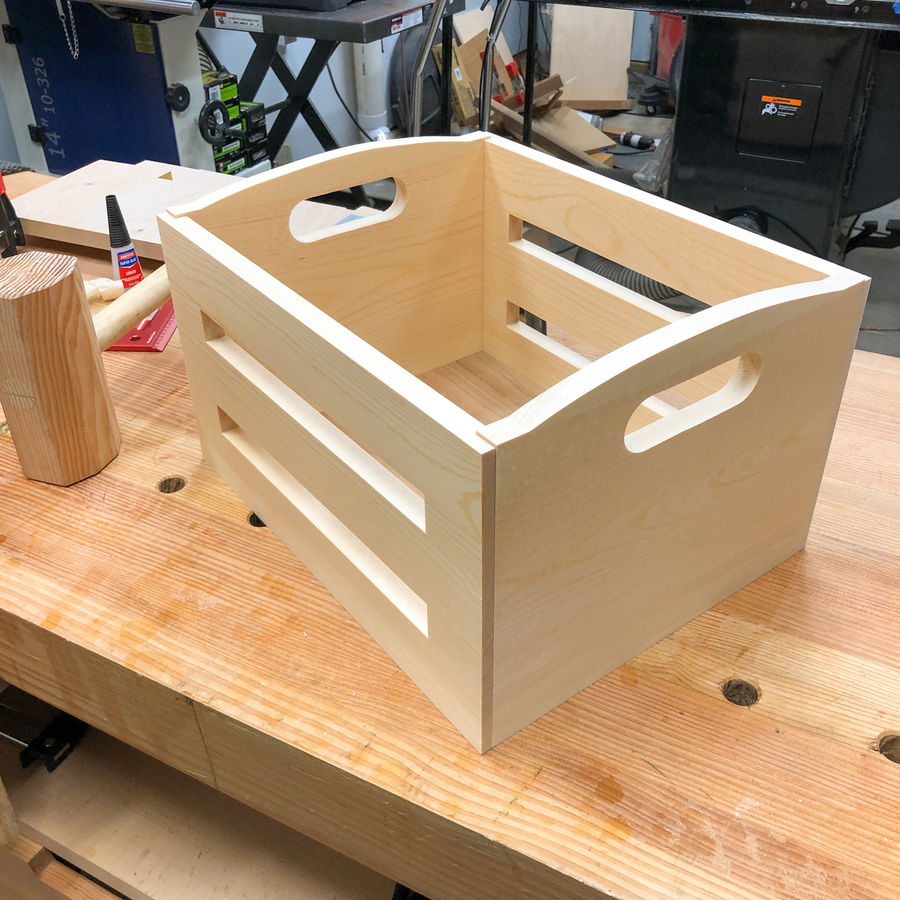 Follow up test fit with joinery cut on the sides. Fit pretty well. 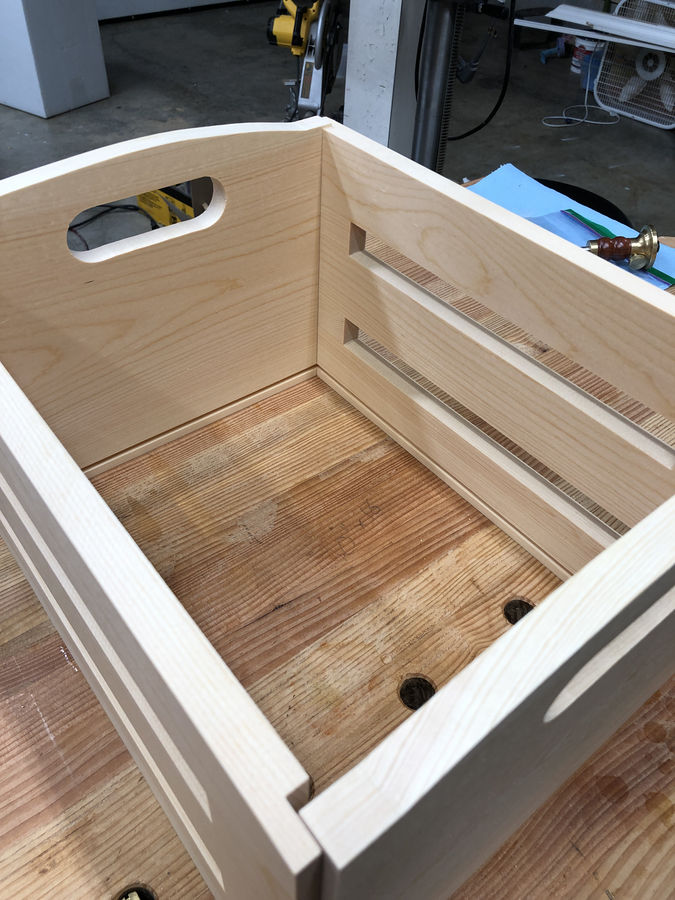 Joinery was an easy job. Rabbets for the corners and a groove in the bottom for a plywood panel. I put the rabbets in an orientation to allow the forged nails to provide the most strength to the pulling motion from the handles. 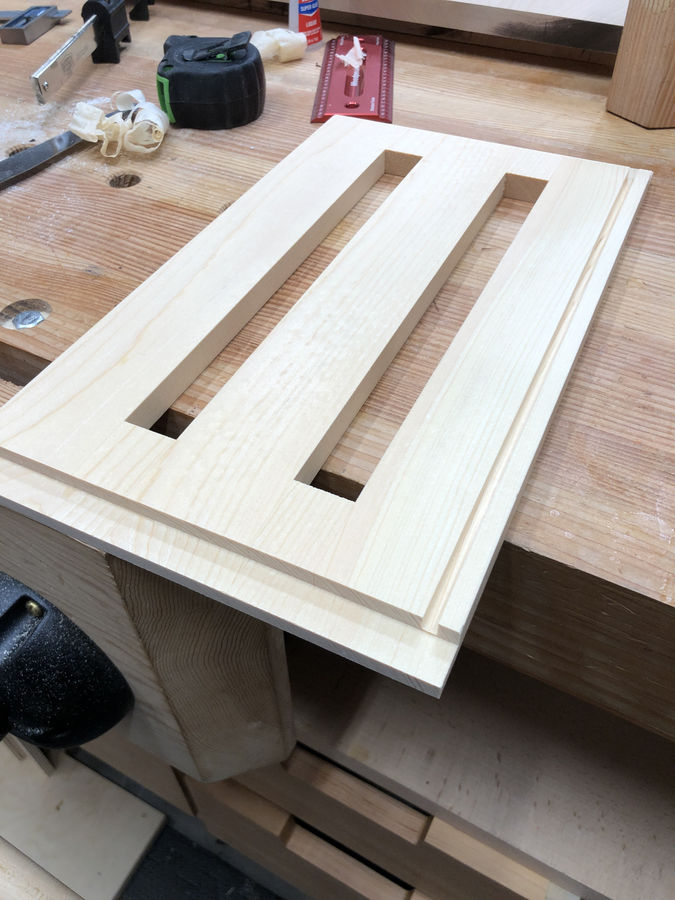 Clean cuts, but I think my blade is in need of a clean and scrub. 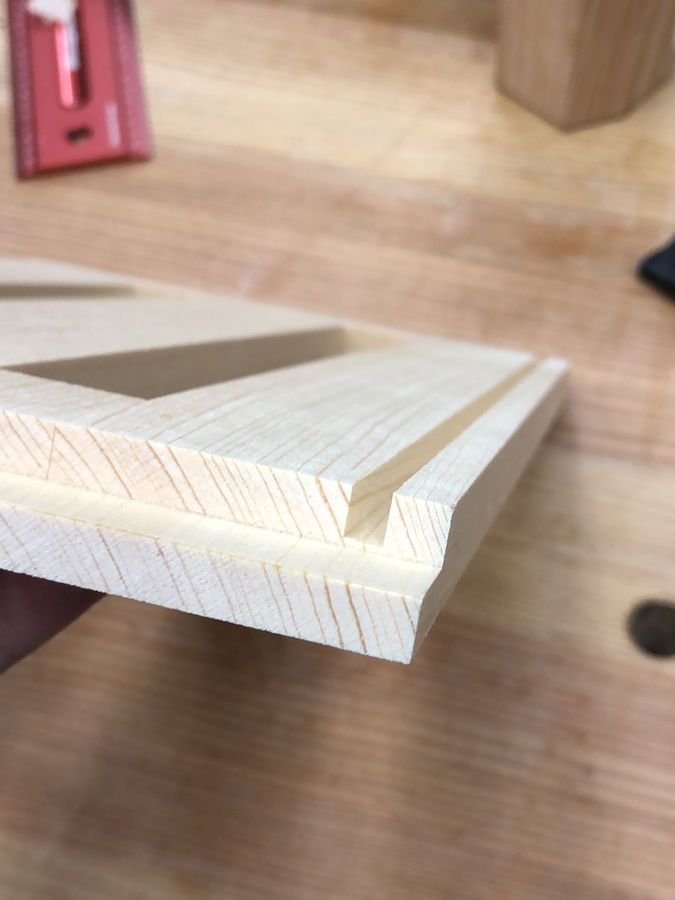 I took the groove as far as I dared without letting it show through the rabbet. 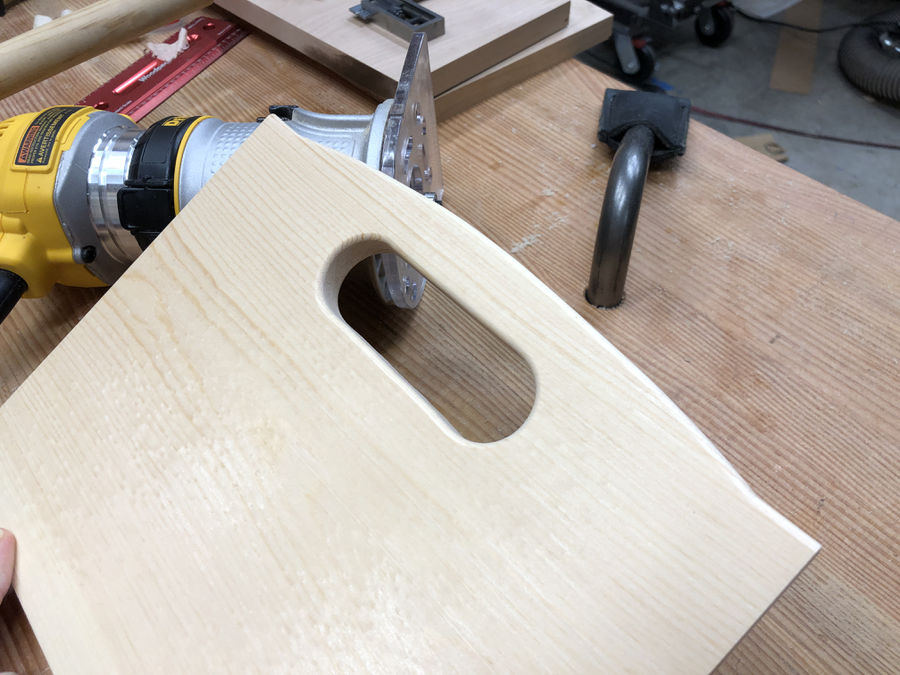 Before the glue up I hit all the main touch surfaces with the 1/8" roundover to help with comfort. I then followed up and hit a few more areas with the same roundover. I wasn't super concerned with aesthetics on this piece, so I figured comfort and safety was a good point to hit. 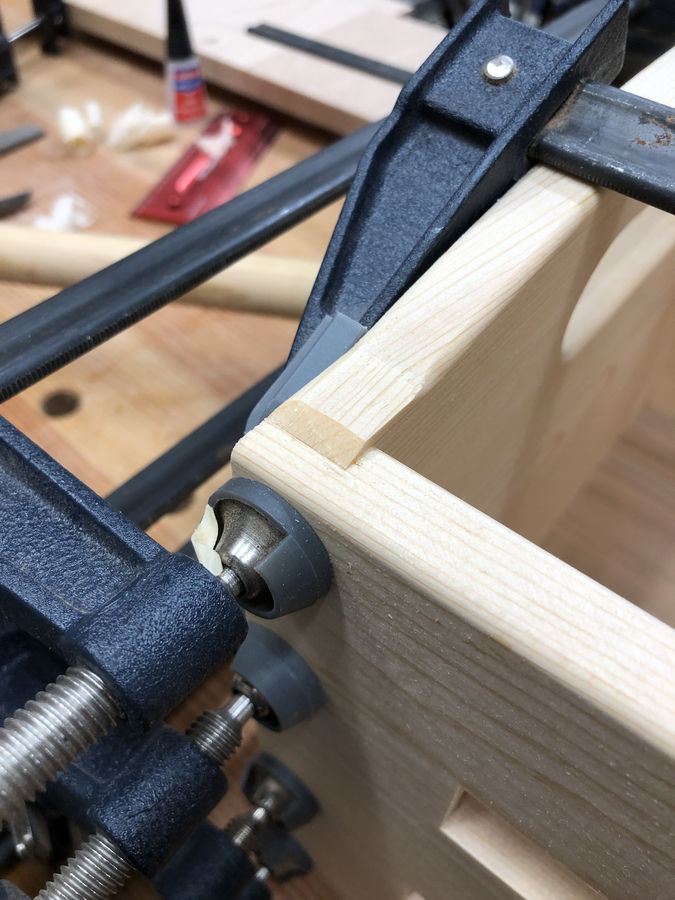 I noticed when I was gluing up I mismeasured on where the sides join the front and back so it left a bit of a ledge. I left it at first but came in later and added a little chamfer to ease the transition here. 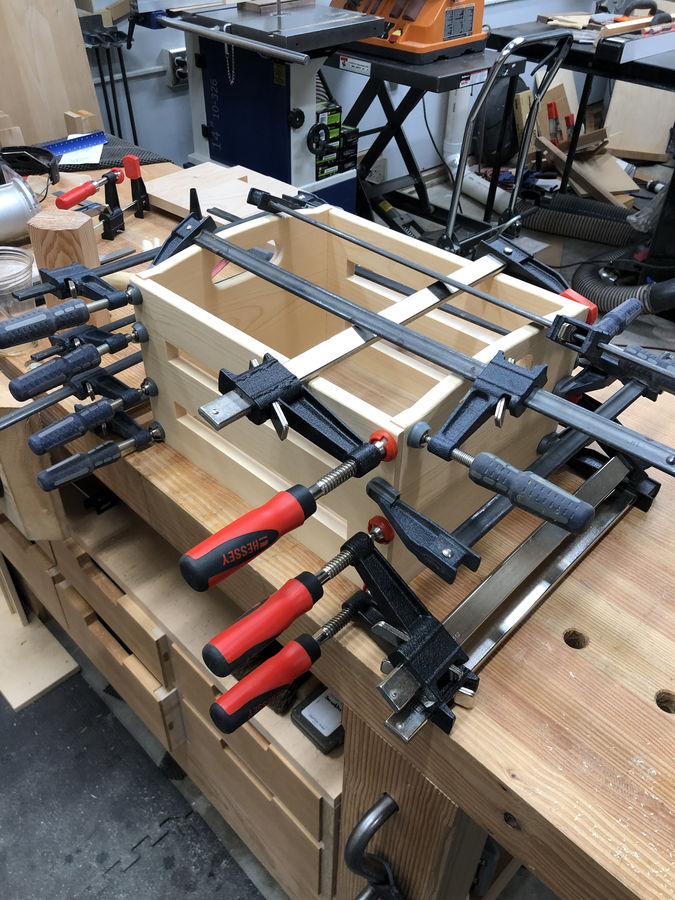 "This should be a simple glue up." 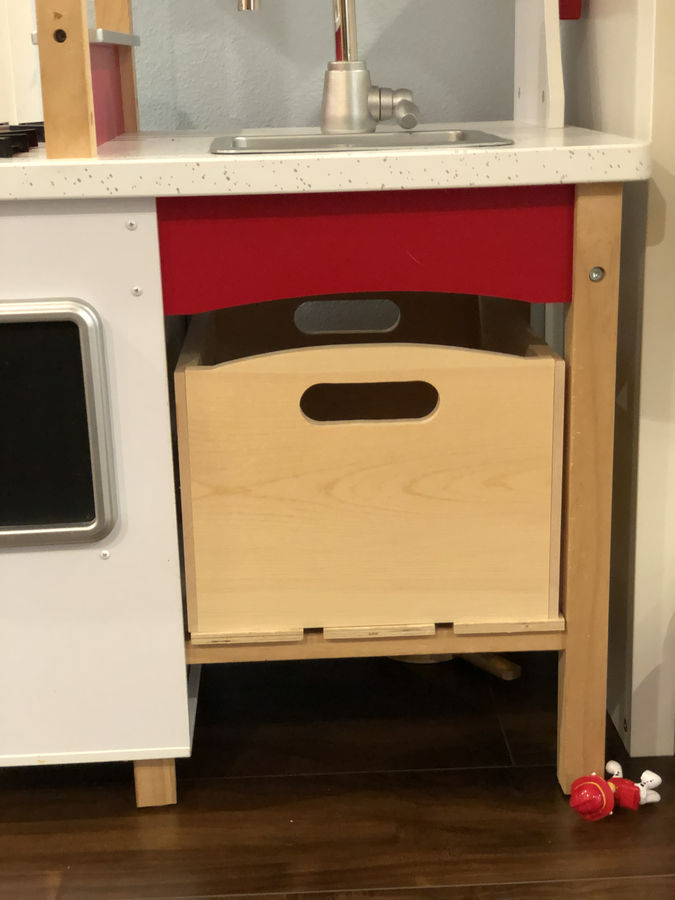 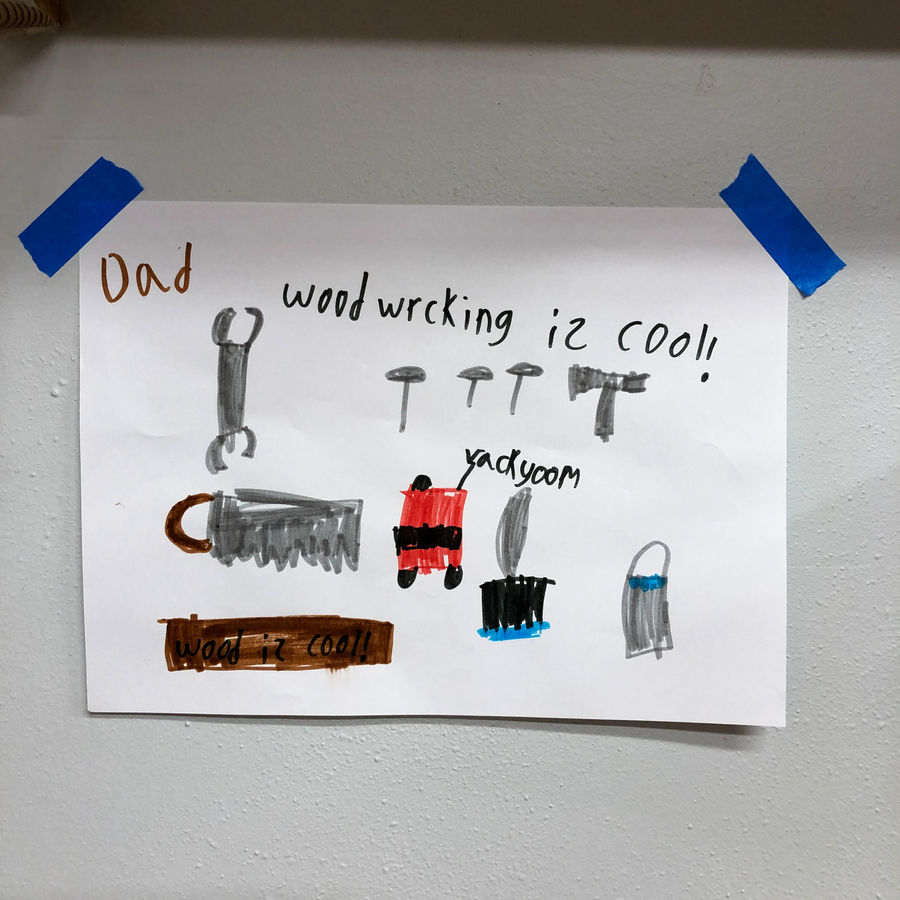 A gift from my daughter after a long day at work. It was very sweet of her and I couldn't help but hang it up in the shop. My wife did point out that there's no way to prove that something is uncool than making a sign to say "X is cool." #getoffmylawn 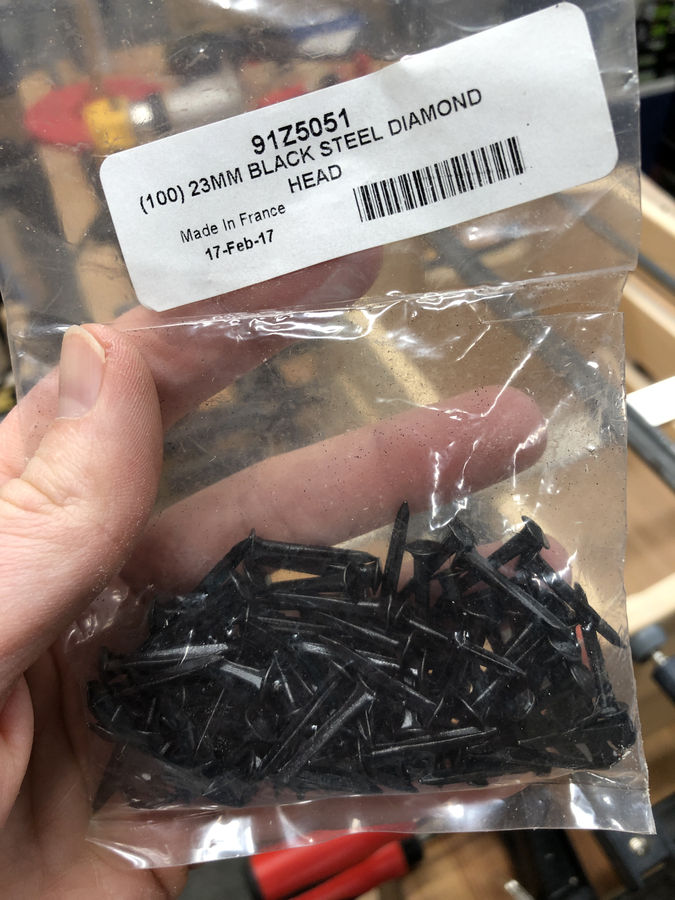 The diamond head nails for the final touch. I've never used these before (nails in general are sparing in use) and wanted something low risk to try things out on. I had some bigger ones for a boarded bookshelf I intend to make for the kids bedroom, but I had to get some 1" nails for this box. 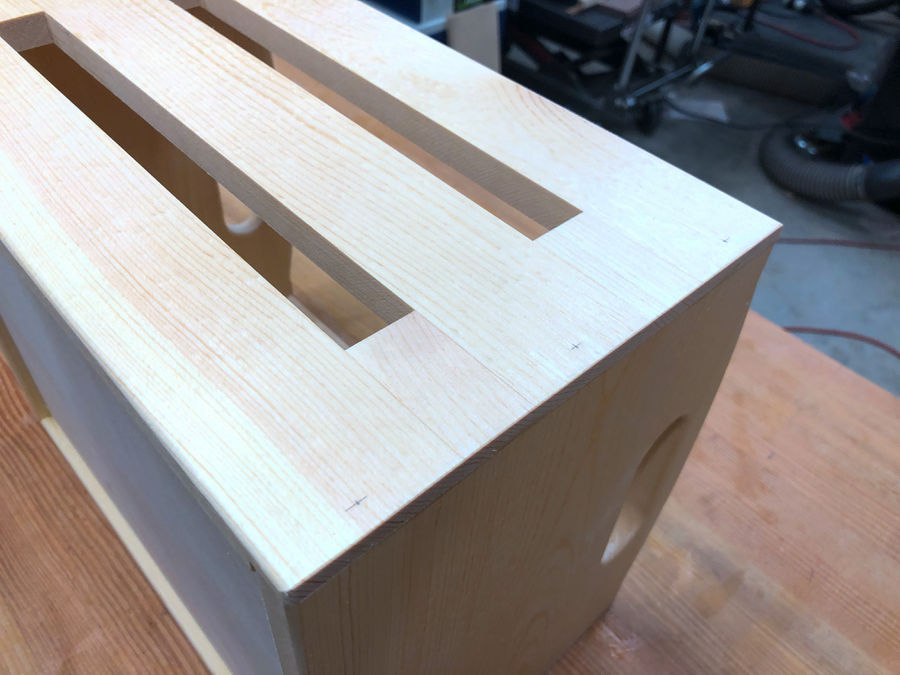 Original plan called for 5 on each corner. I cut that back to three as I didn't really see the need to secure anything more than a single point on each connecting part of the side slats. 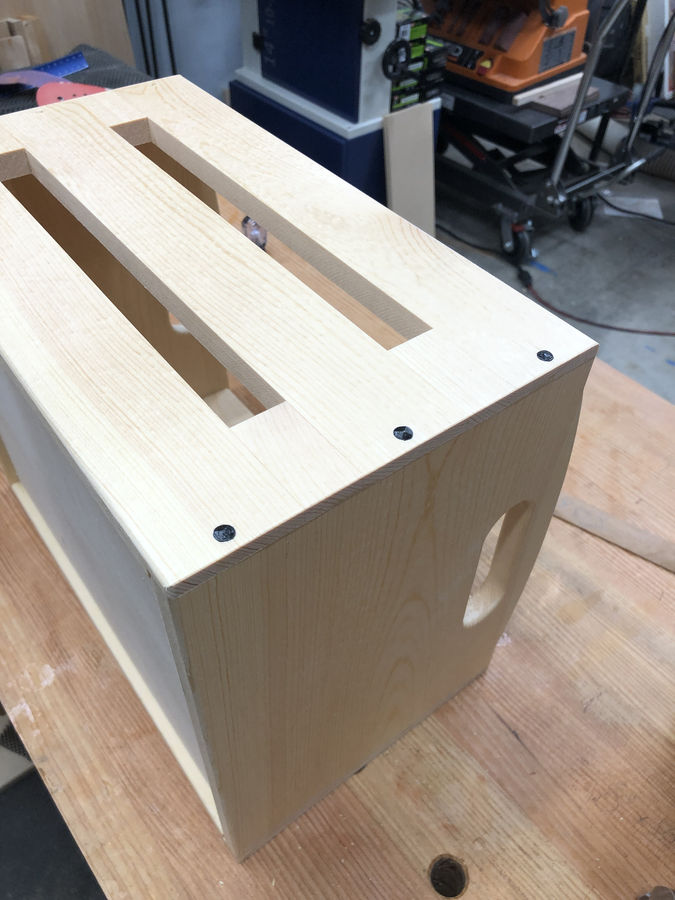 My test run on the nails. Got some good learnings here. I originally undersized the holes a bit too much as I figured the pine would squish. But since these were so close to the end the grain started to crack. I pulled the one nail and enlarged the holes closer to the diameter of the nail at the head, but only drilled through the rabbet portion so the bulk of the nail would still wedge into the end of the tote. With the enlarged hole these went in without too much fuss. A smaller hole would be fine if these were going in the middle of a board to secure something like a shelf in a bookshelf or cabinet. 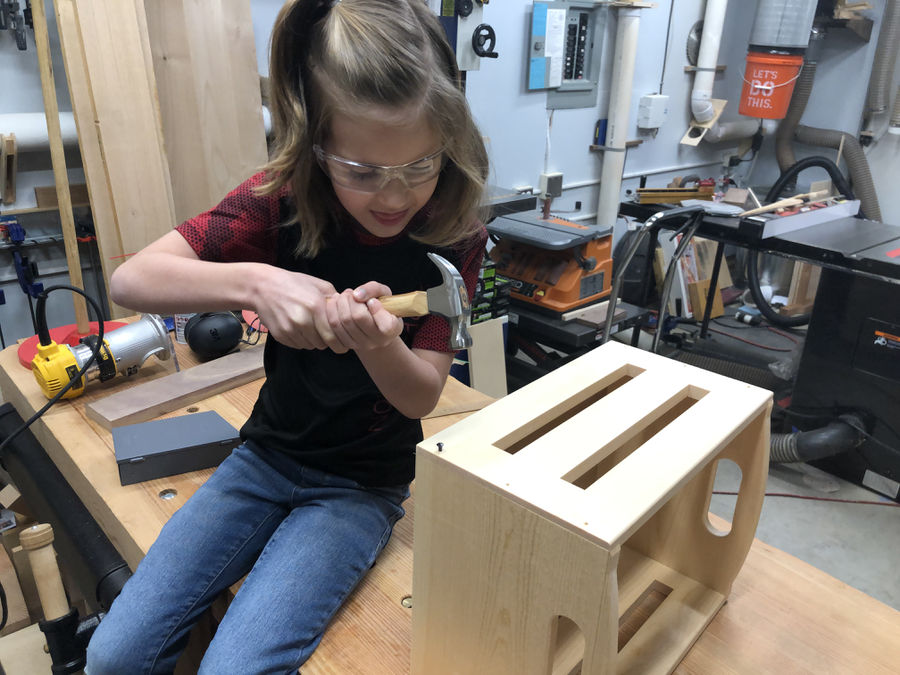 It's hammertime! I bought them a small hammer from Lee Valley to do their own projects, but I didn't anticipate them trying to hold with two hands. I'll probably give them my full sized 8oz hammer next time. 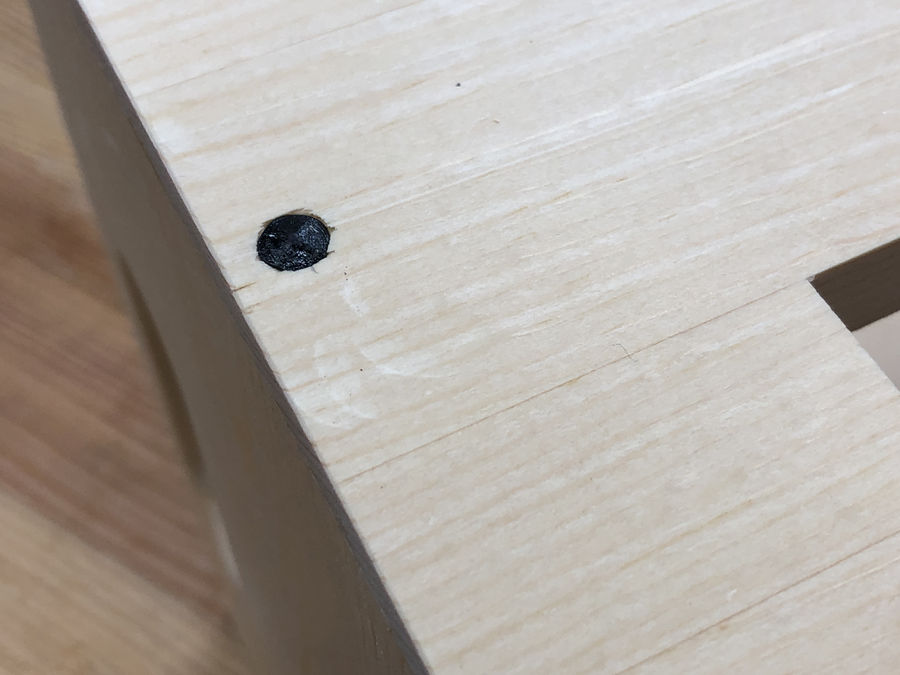 Marks of learning, memories to keep for a long time. 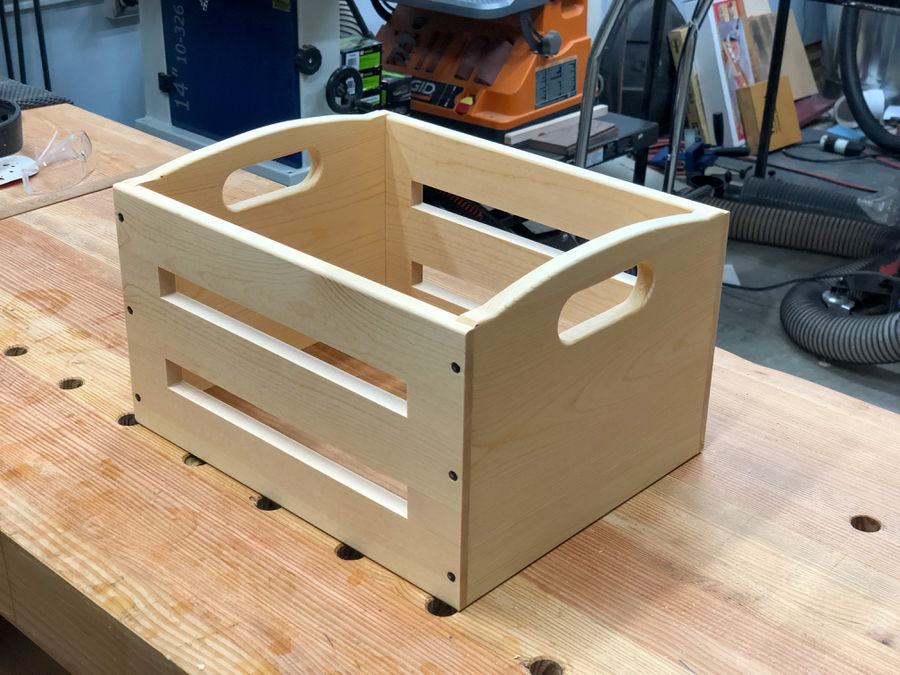 12 nails later and we're done. I gave the whole thing a single coat of blonde shellac and a light sand. It's a toy so I don't mind much about anything else for a finish. I didn't bother smoothing anything and all the surfaces are off the thickness planer, which is a spiral head so it's above average anyway, but for what it is there isn't more to do. I figure a months worth of love would undo any special care I would have put into it anyway. It's more important for me to get this into my kids hands than fuss over unneeded details. 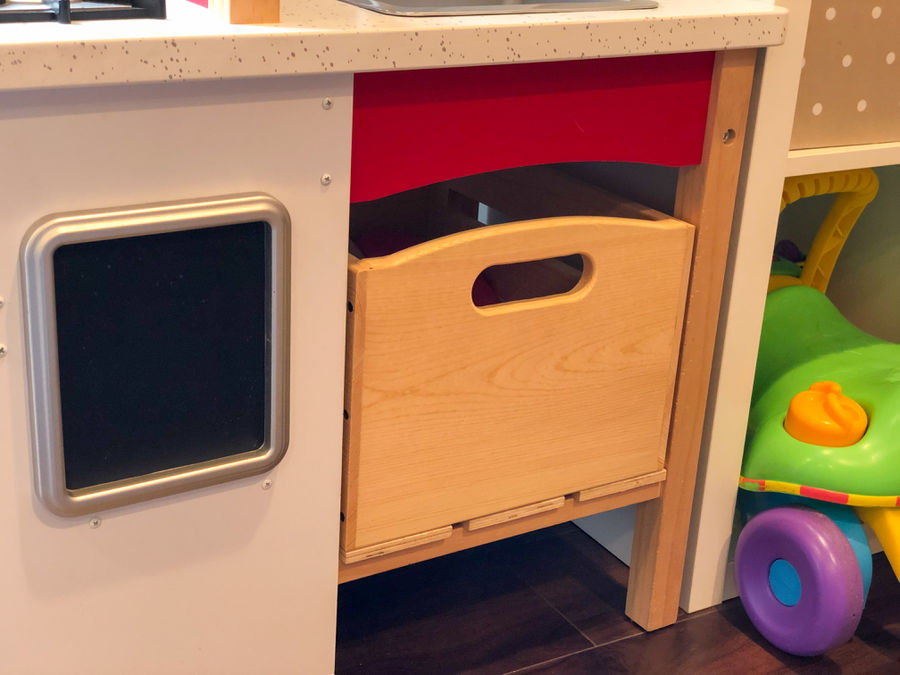 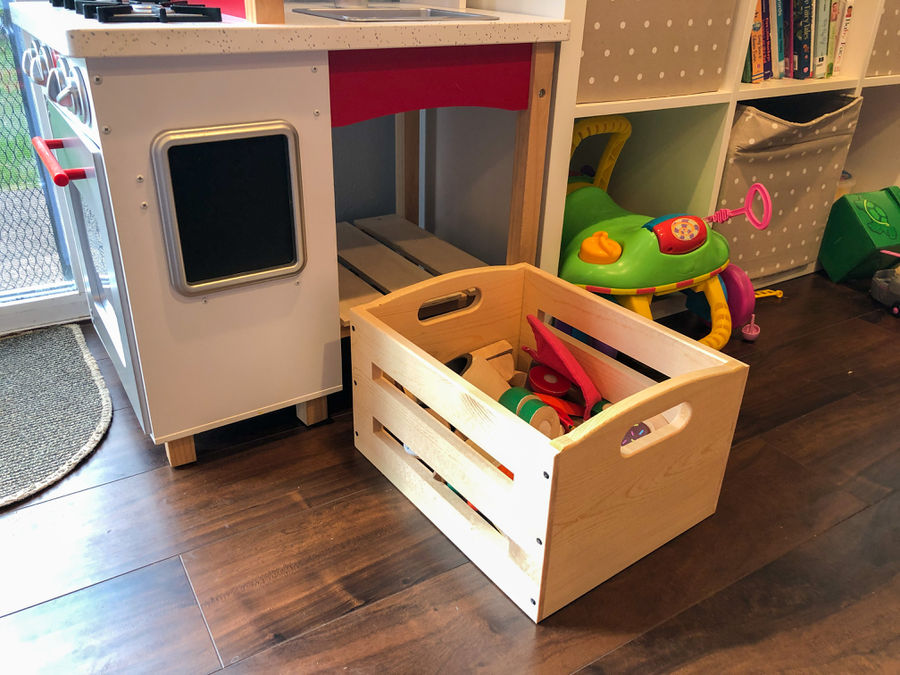 Look at that, toys with a home that isn't on the floor. Except now it looks like we have room for more toys.....yay. 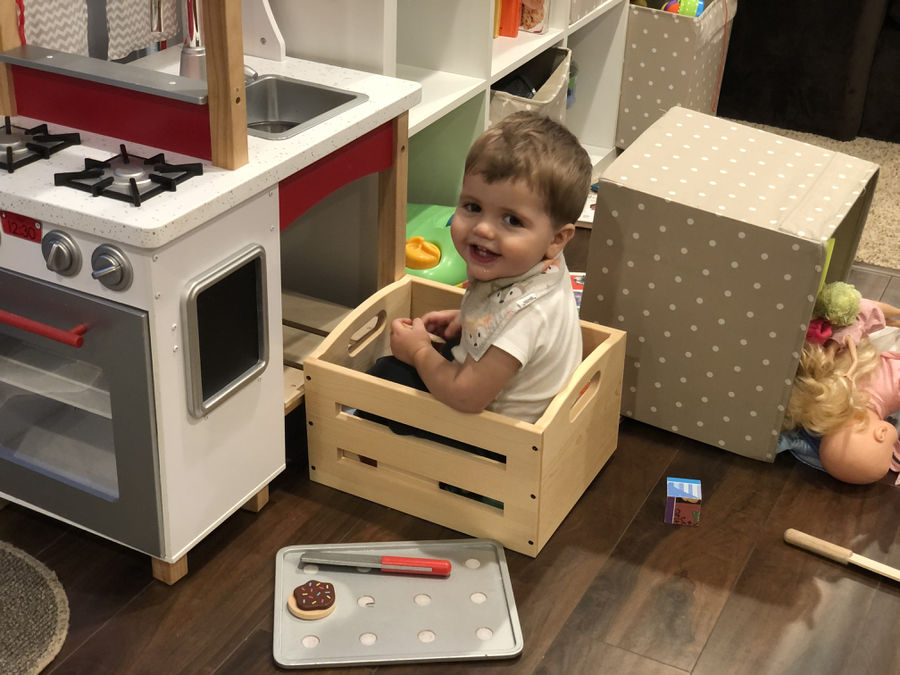 Final stamp of approval from this guy. I can honestly say I did not plan or expect this. I was working on dinner, turned around and found him having a great time. I was a little worried that the 1/4" ply bottom might buckle if my older kids followed suit, so I took it back into the shop and glued in a second piece on the underside to double up the bottom. Unnecessary? For sure. Getting use of extra materials? That's the ticket.