I had a good friend who bought a second hand baby grand years ago. The bench that came with the piano was not original, but it did the job. Apparently it came in rough shape, but after 3 years or so of kids rocking around on it during piano lessons it was close to coming apart. He originally asked if I had clamps long enough to allow him to glue it together, but I offered to take it and repair it properly. I don’t normally take jobs that involve refinishing/repairing, but this was a good friend and the job looked interesting. 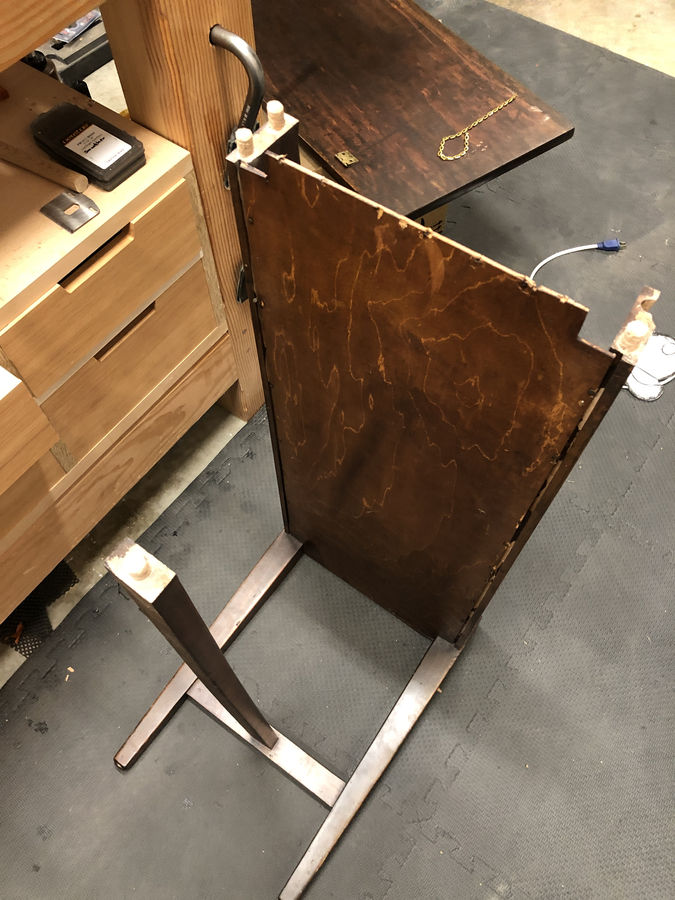 I spaced out on earlier photos, but we come in mid disassembly. The whole frame was loose and had a good 2” sway back and forth when referencing the bench seat. I removed the hinges from the body and was able to remove one side without much effort at all. The only thing holding this together was the nails in the bottom of the storage tray. 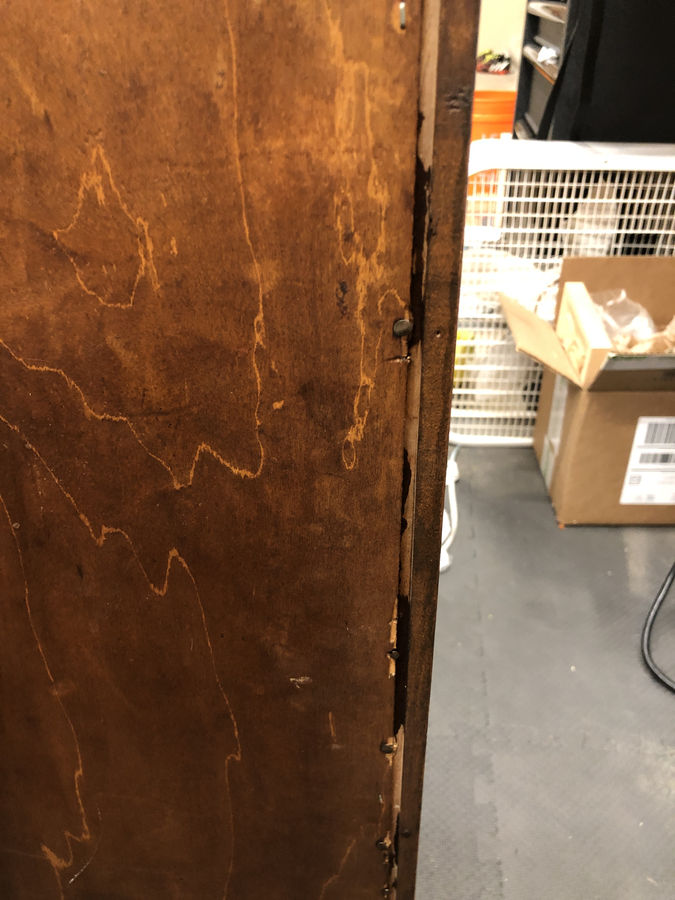 It was a combination of staples and nails holding this bottom piece on and the whole bench together. Based on the looks, I don’t think I was the first person to try and keep this thing from falling apart. 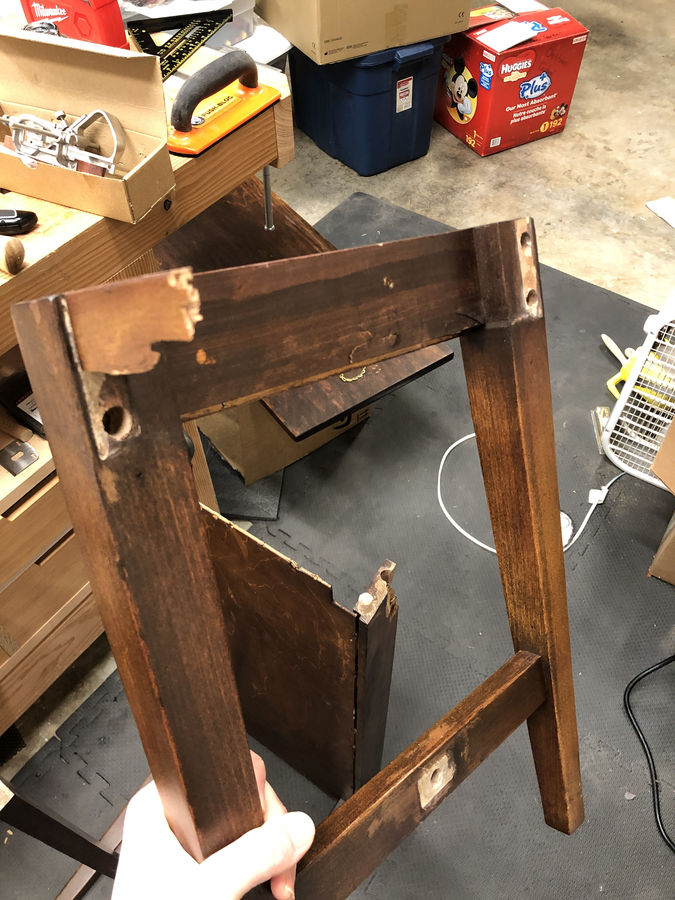 Pulling the first side off took a bit of the rail with it. Thankfully it was a really clean break and the piece fit back well. 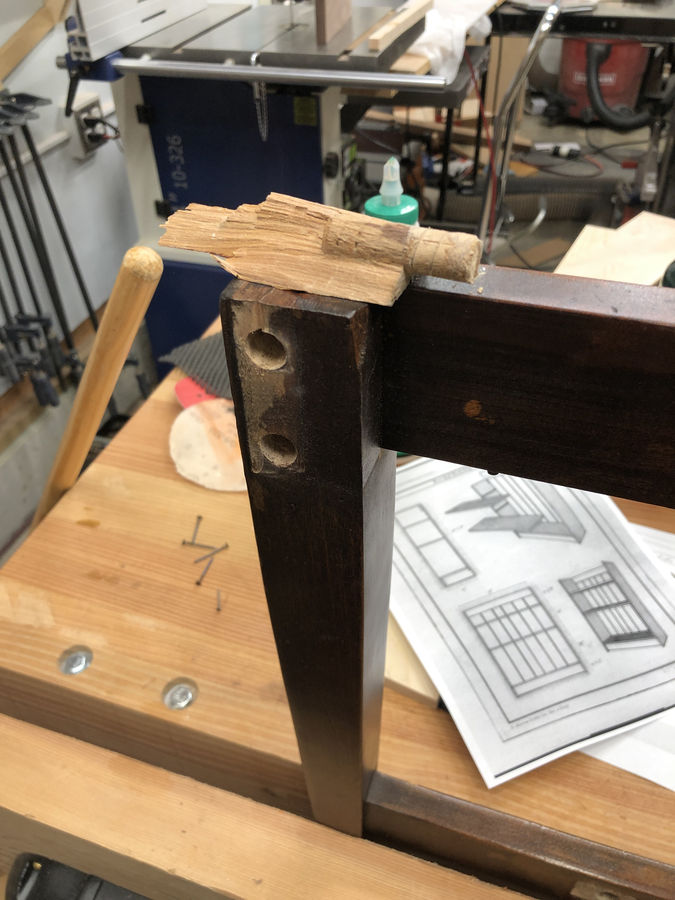 It actually took a bit of work to remove it from the leg, especially when trying not to damage the mating surface back to the rail. 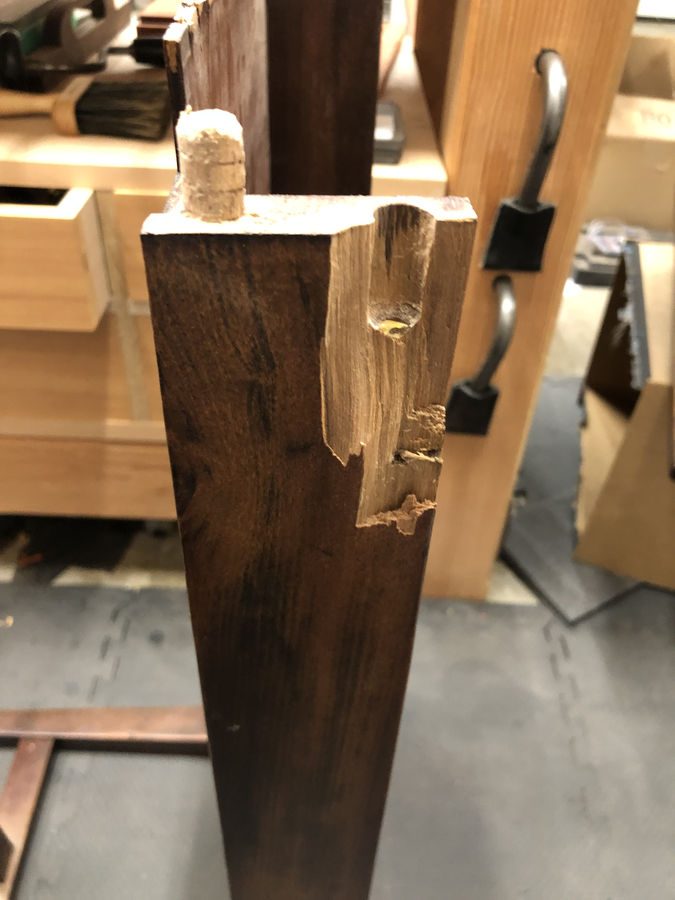 It looks worse than it is, but I have a theory as to why this rail was worse off than the other. This was where the hinges to the lid were located, so there was significantly more stress on this joint when the lid was opened and shut. Plus any amount of shifting weight on the lid was transferred directly to these joints. 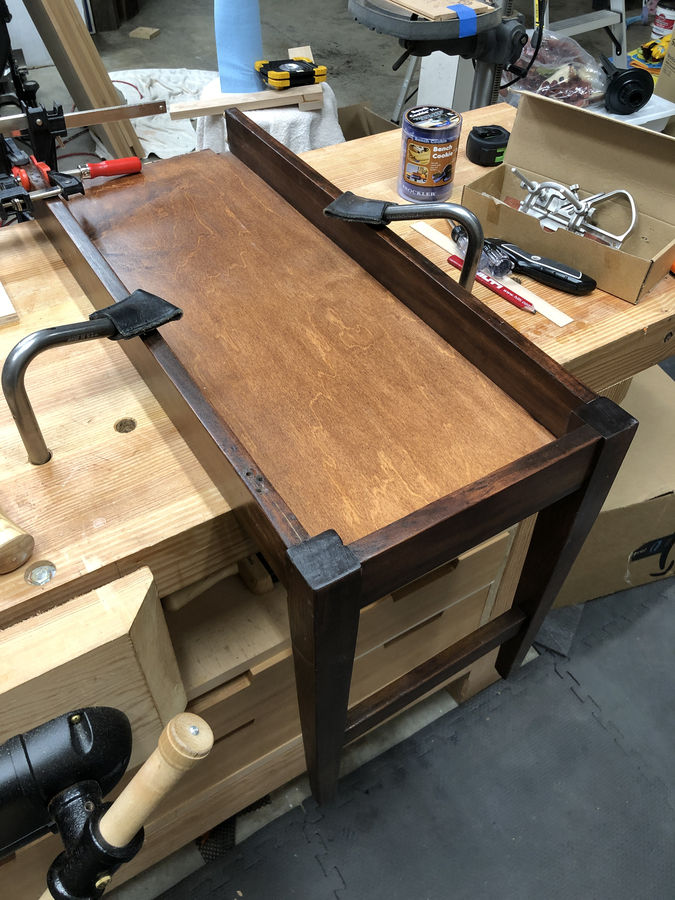 This side took a bit more....persuasion to remove. The joint was not sound, but the built up glue was enough to stop it from completely sliding out of the assembly. 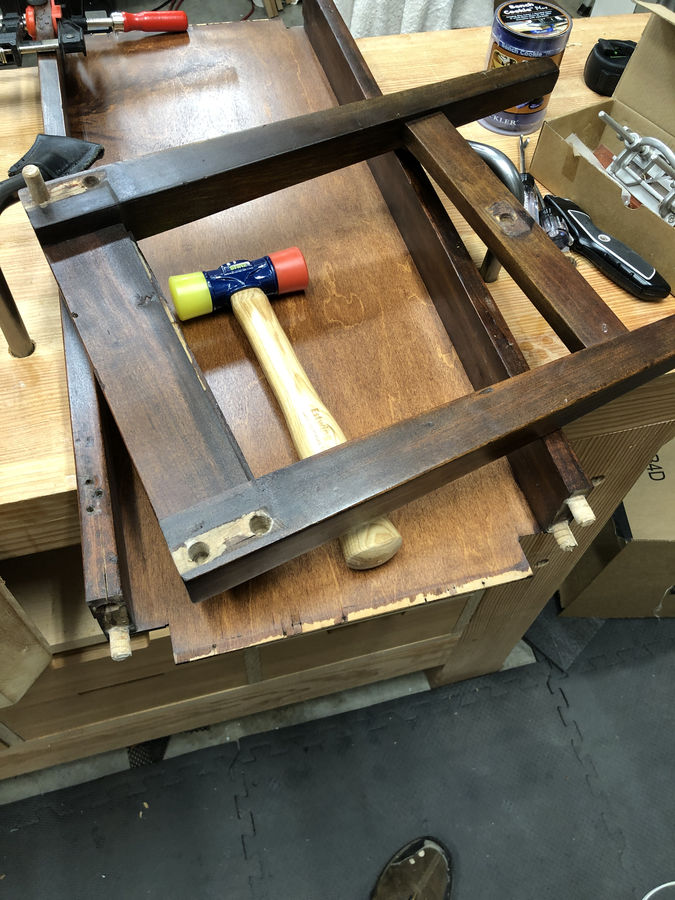 Persuasion complete. These double headed mallets from Eastwing are fantastic to have at the bench. 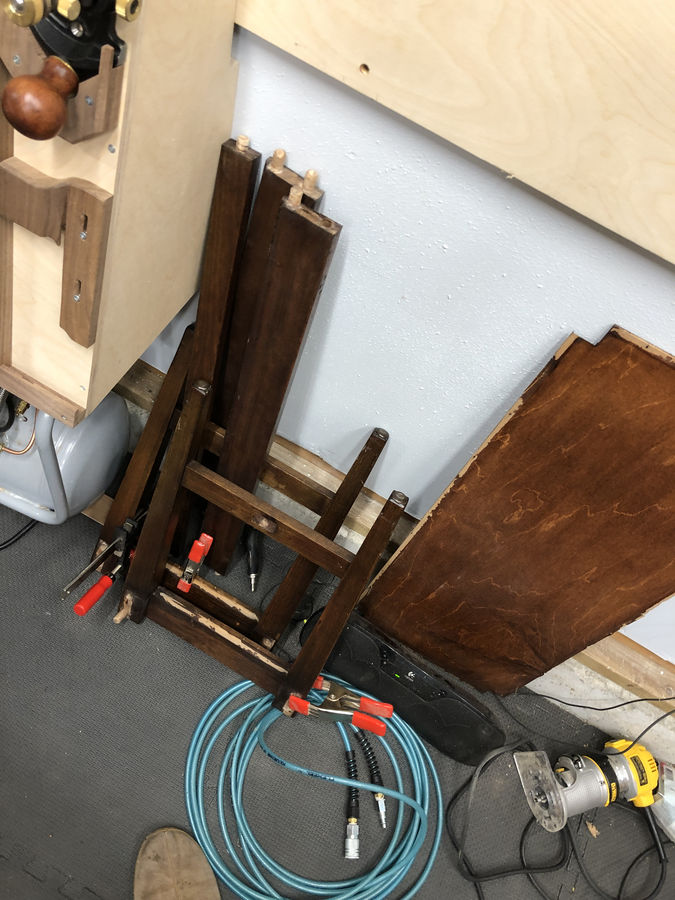 What was a bench is now reduced to a pile of parts. This is more like it. Everything is very salvageable, except the base. It was thin ply that wasn’t even cut appropriately to size. 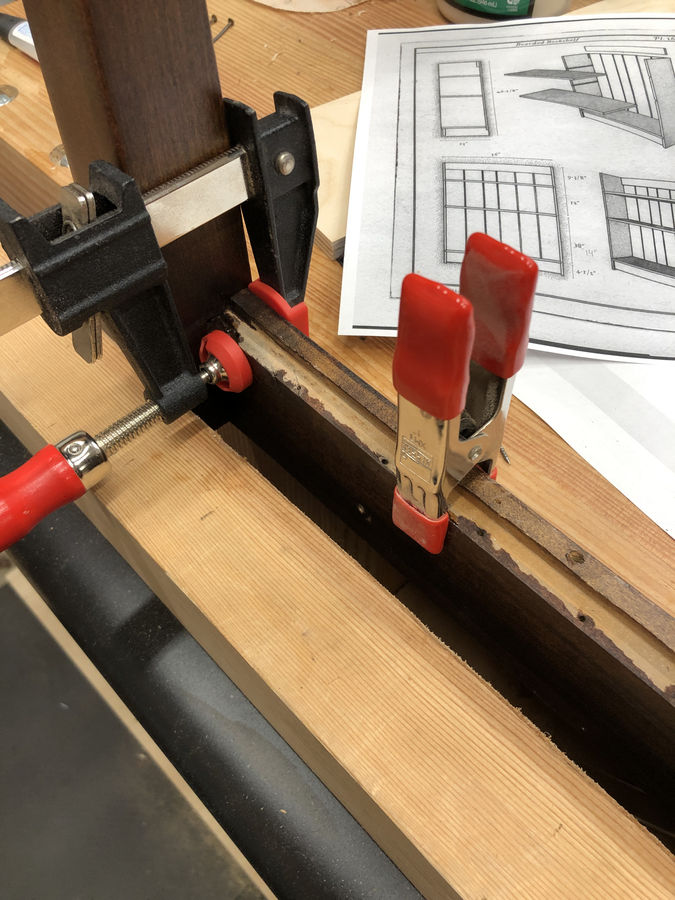 First step was repairing splits in the rails caused by poor nail and staple placement. This was more aesthetic than anything, but I felt like I couldn’t leave it. 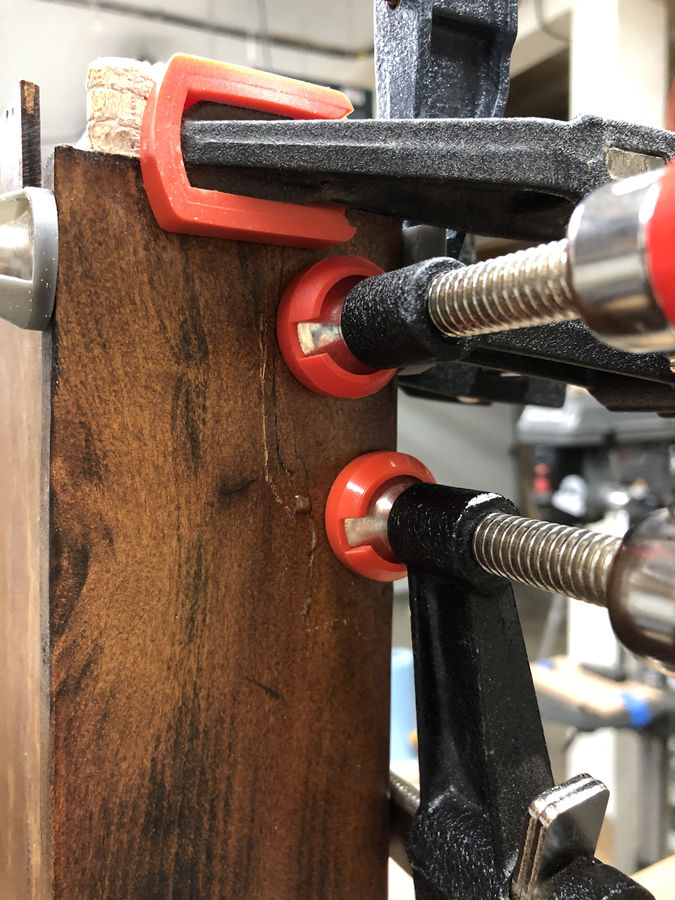 First of the worse breaks on the piece. I was keen on keeping this bench repairable in the future, so I’ve opted to use liquid hide glue. (Even though the next time this bench wears out it would be better off heading to the firewood pile) I wanted to make sure everything had great adhesion, so I brushed glue on both surfaces and used an entirely appropriate* amount of clamps. 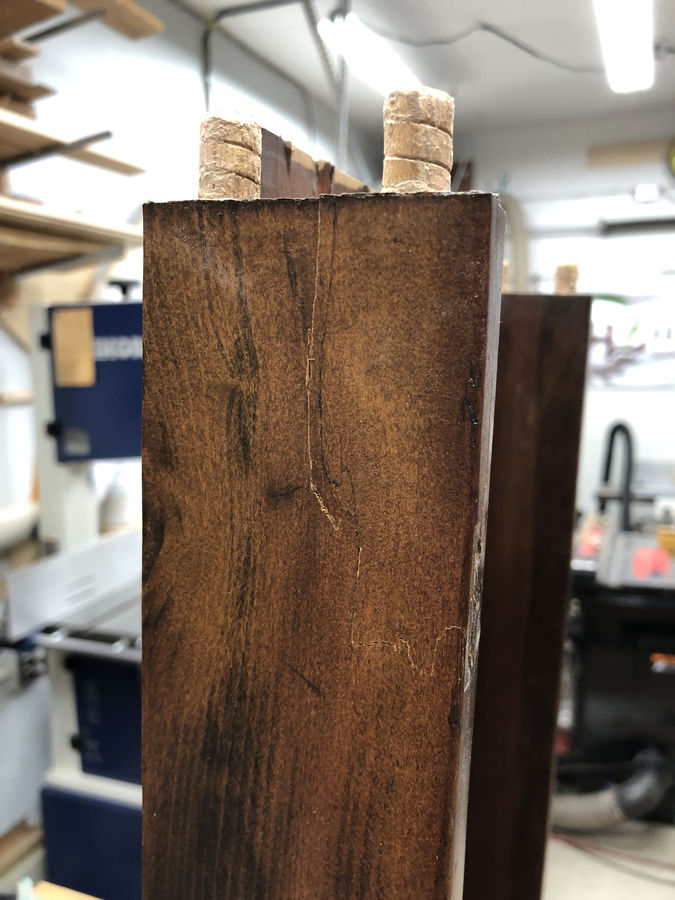 Fairly seamless repair. If I was doing a full restore on this, I would have sanded and refinished, which would have resulted in an invisible repair. 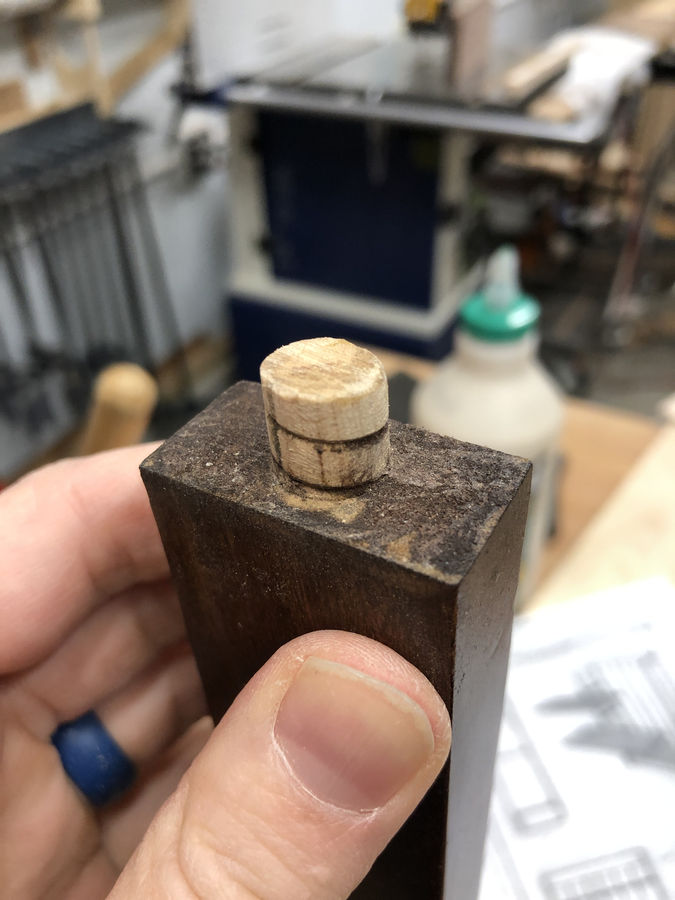 All of the dowel joinery had crusted PVA glue on them, which wouldn’t be ideal for glue adhesion this time around (unless I opted for Epoxy). So I took a gamble and did my best to remove all the old glue while not decreasing the diameter of the joint. It took a combination of file work and sanding, but I was able to get bare wood on all the dowels. I did my best in the corresponding holes, but it was not as successful there. 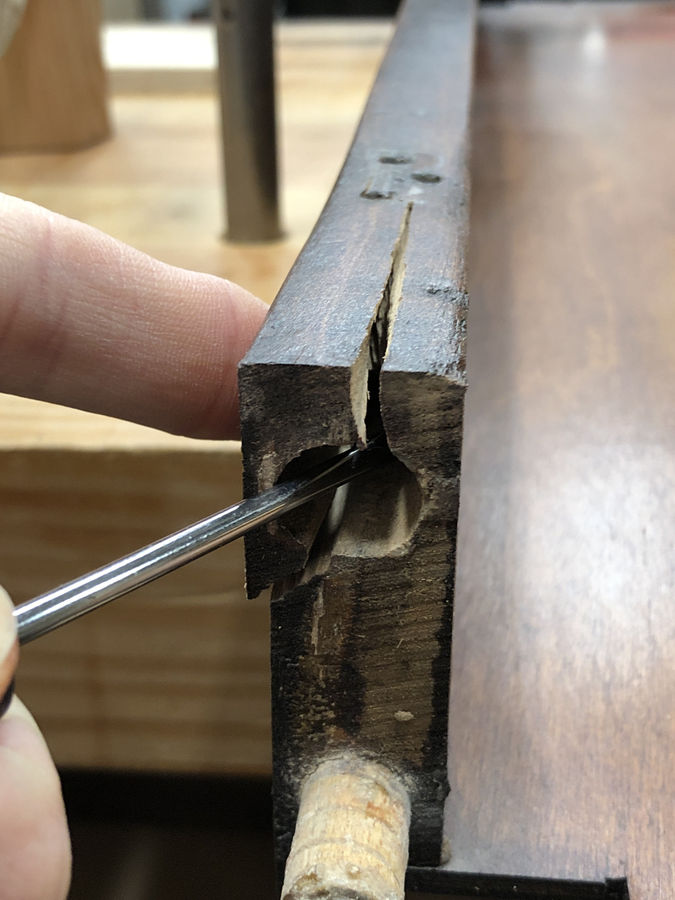 I really wanted to completely break this piece to make the repair easier, but figured I should keep as much build in structural integrity as I could. You can see the crack go all the way back to the hinge mount. 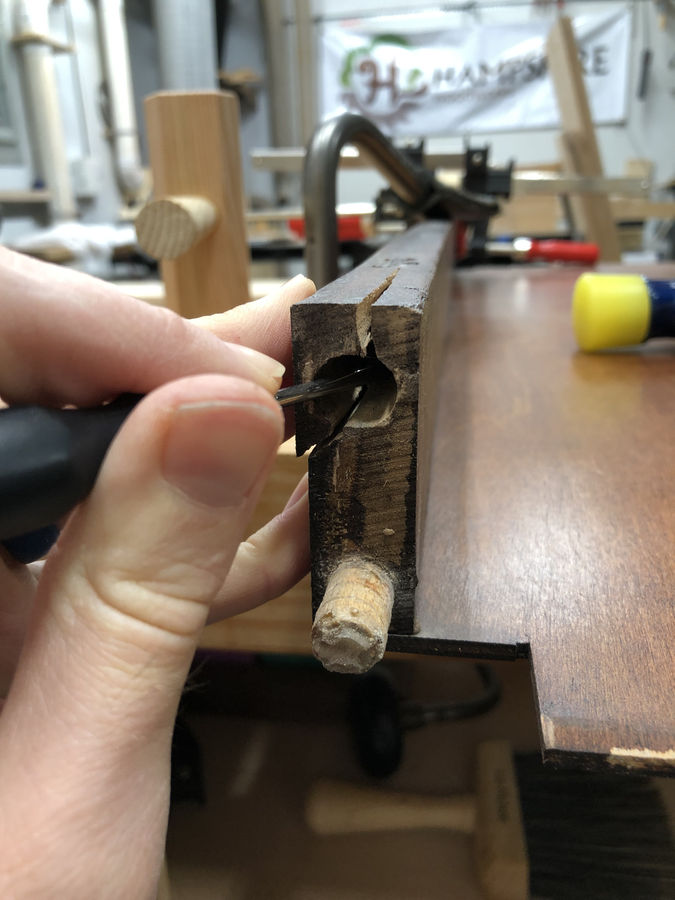 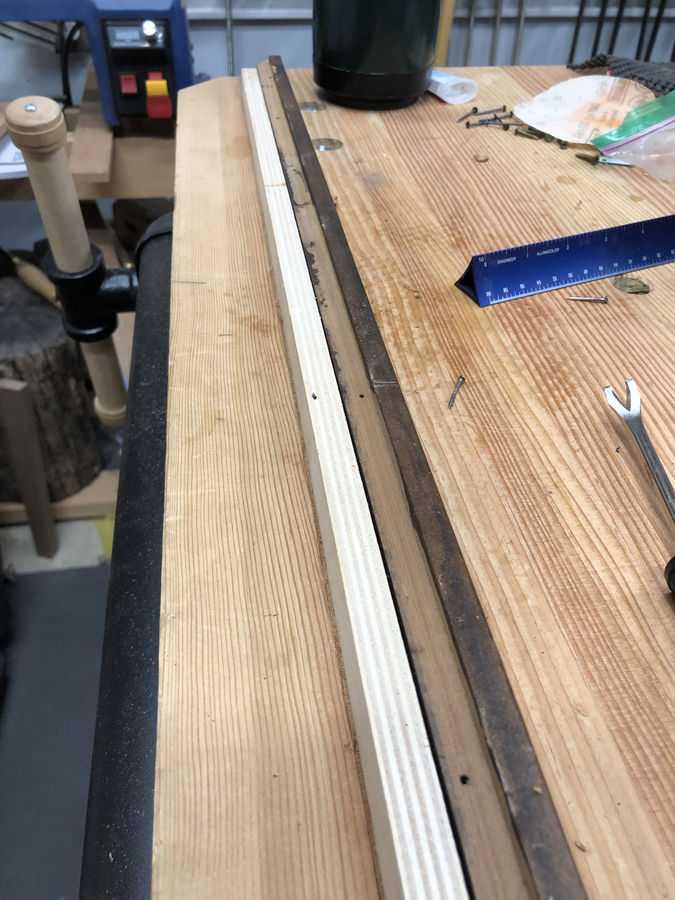 I pulled all the stuck nails and staples out of these rails. I was intending on using a new piece of ply for the tray, and wanted to glue it in place to give a bit more hold on this bench. To make sure things stuck, I hit the rabbet with my shoulder plane to get as much raw wood as I could. 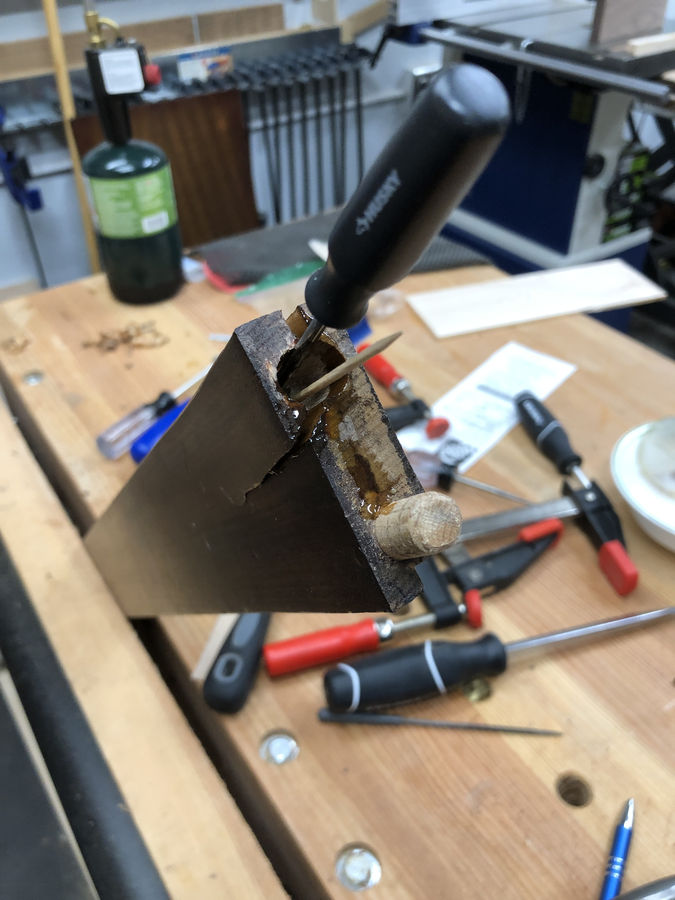 Major repair #2 was the opposite side of the first. The strategy here was keep the glue warm so it flowed as easily as possible, use my small screwdriver to pry this break open as far as I dared, then work as much glue down every side of the crack. It was not very pleasant. 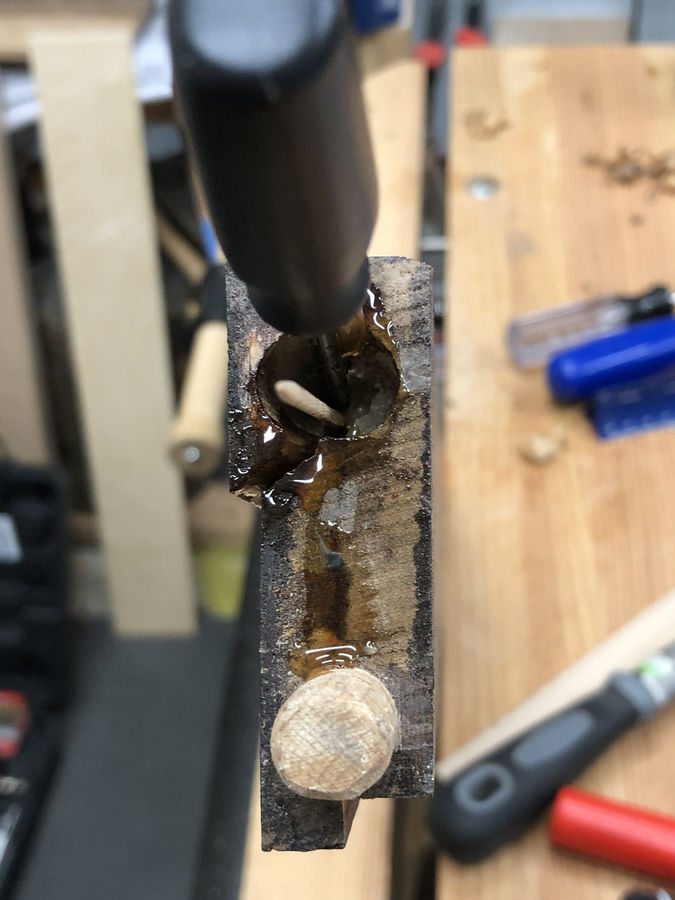 I don’t know how far down the joint I was able to work it, but I had pretty even squeeze out on all sides. 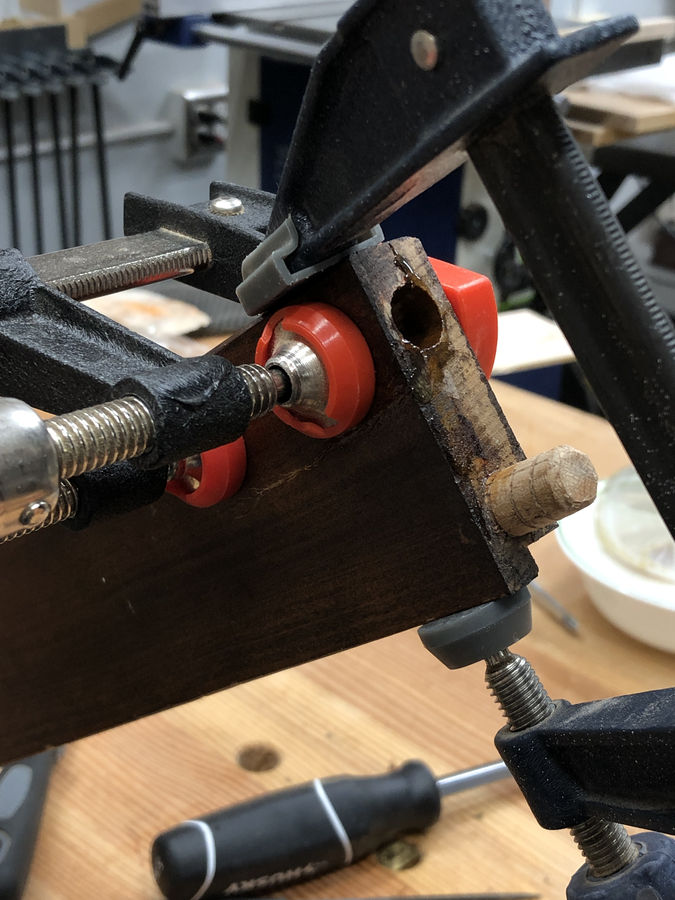 Did the best I could, so we’ll see how things go. 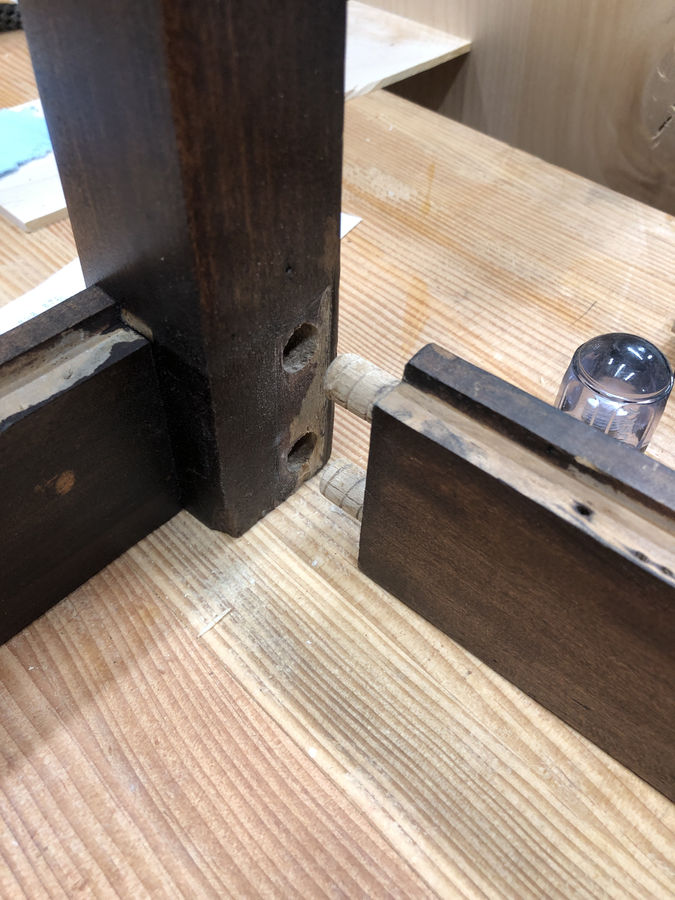 I can’t really show you, but this joint was quite loose. A no go for a non-gap filling adhesive. 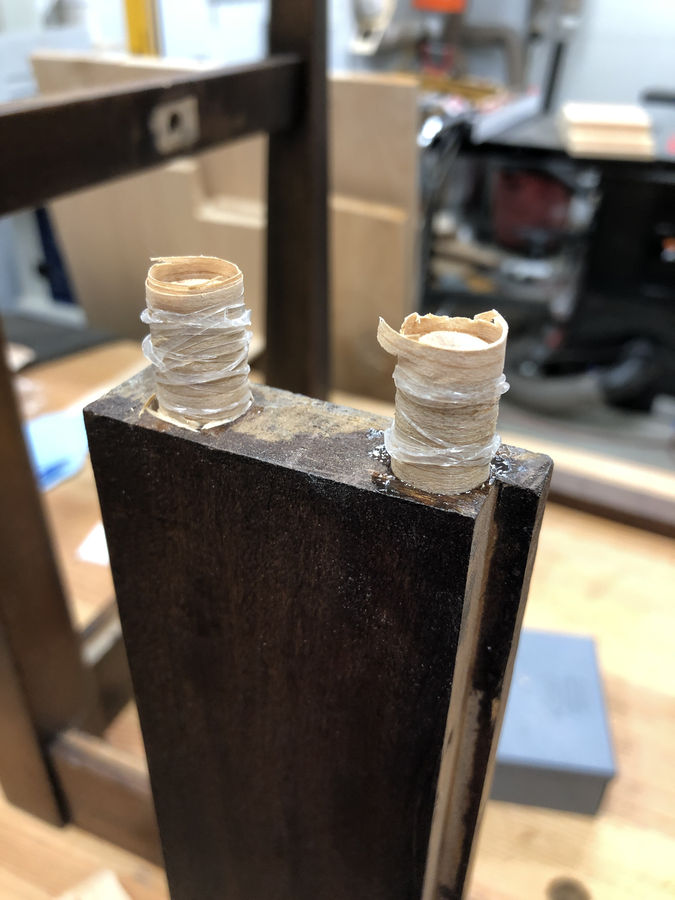 Now we’re entering risky territory. The dowels were all more loose than I wanted them to be after cleaning the old glue off them. In an ideal world I would cut all this old joinery off, and replace it with dominoes, but ain’t nobody got time for that!

Instead I came up with a genius plan to make some heavy cut plane shavings and build up the old dowels by wrapping them with hide glue. Unlike PVA, hide glue will adhere to itself, so I was not worried having the glue soak through the new wood. 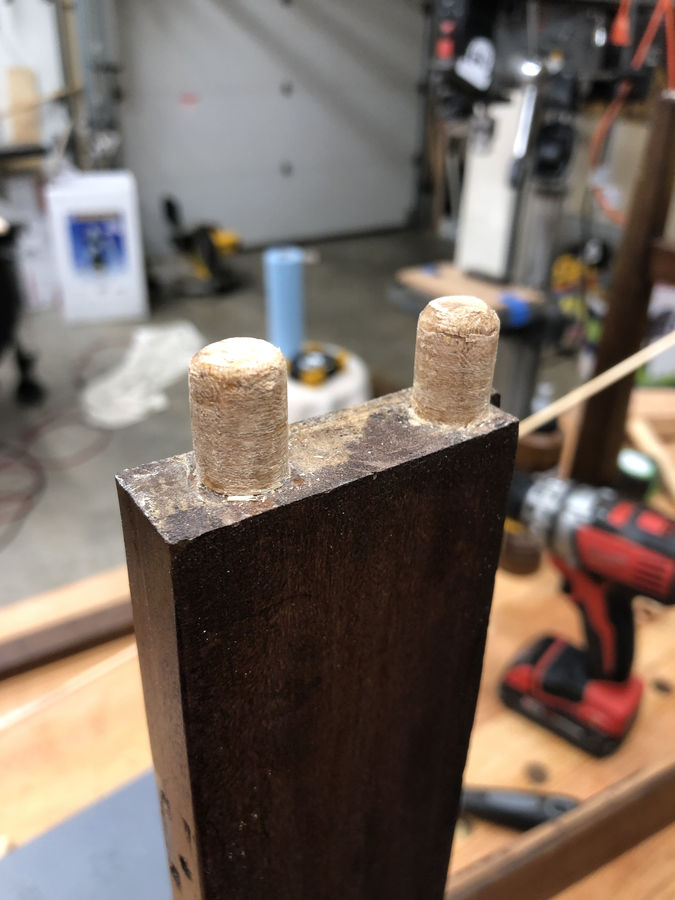 After the glue had dried, I worked the joints back down so they fit snugly in their holes. I believe a strong mechanical joint in the first step to success. On a bench like this, I need all the holding power I can get. 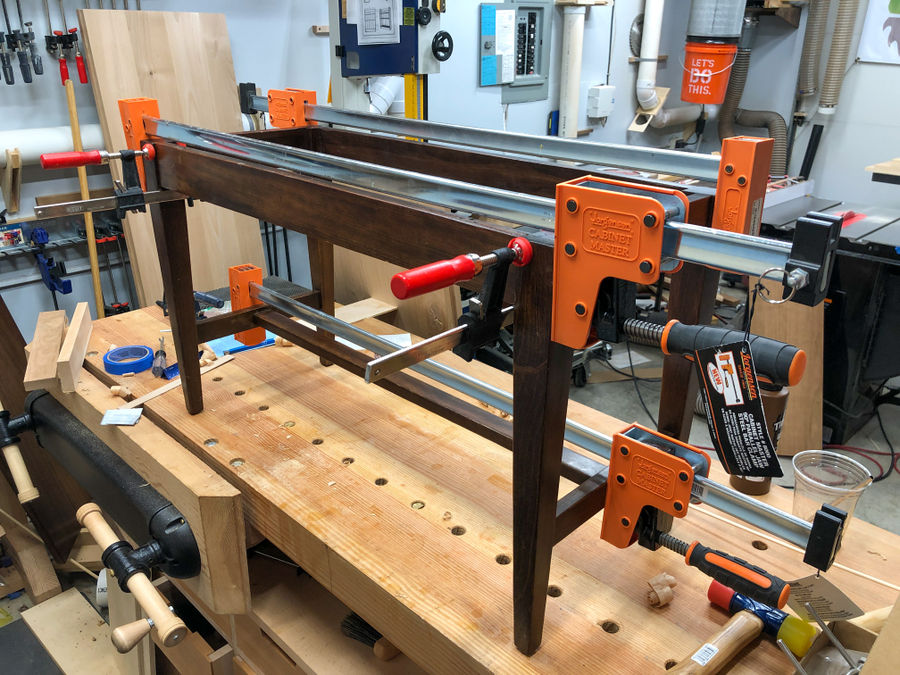 The glue up was uneventful. I noticed that the leg in the foreground had a crack that ran right through the joint. I added an F clamp to the leg to keep things tight. 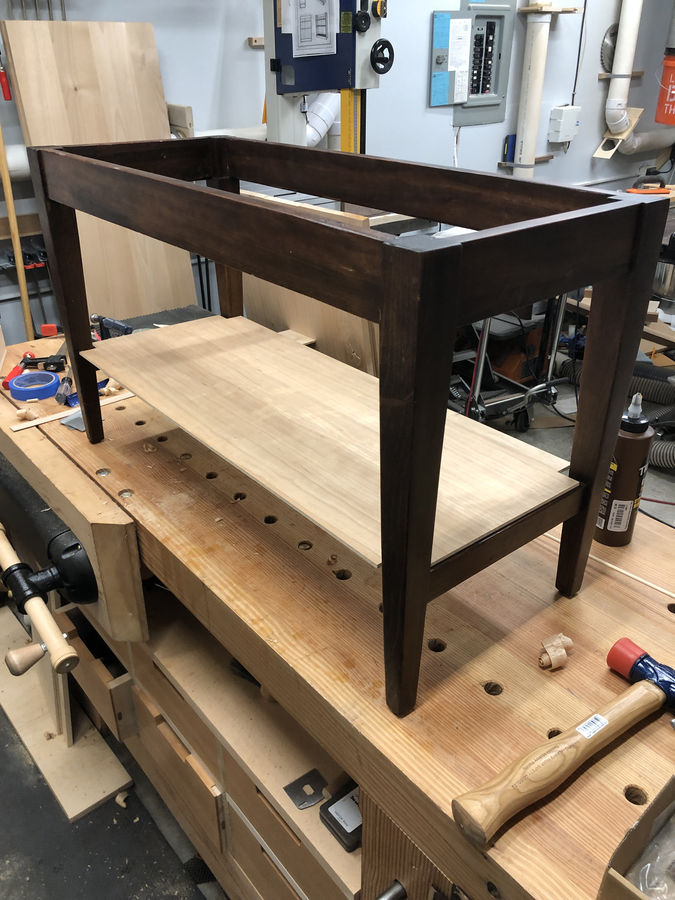 Once the bench was together, I was able to take final measurements for the new tray. 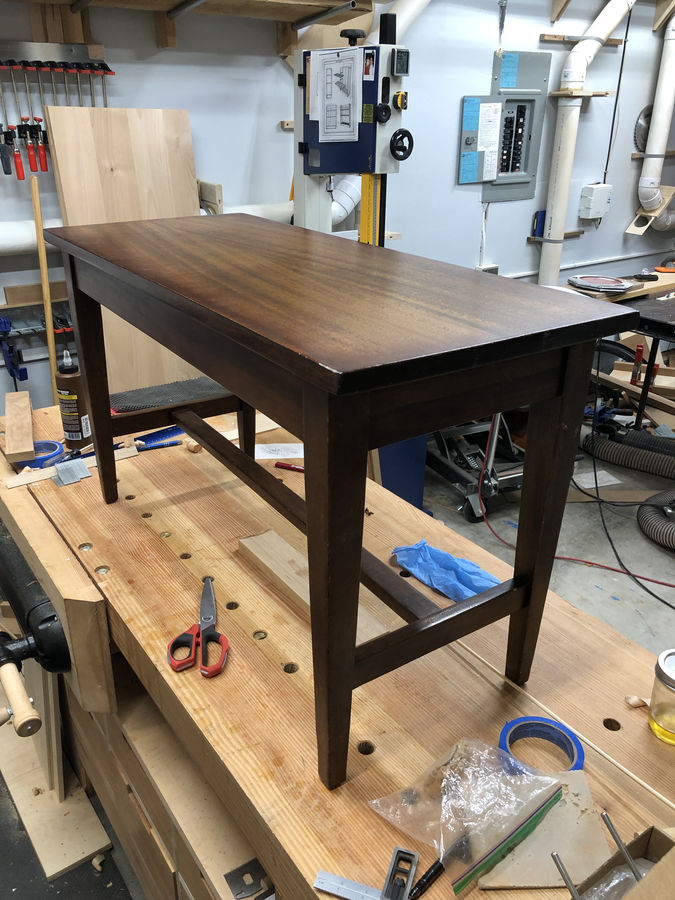 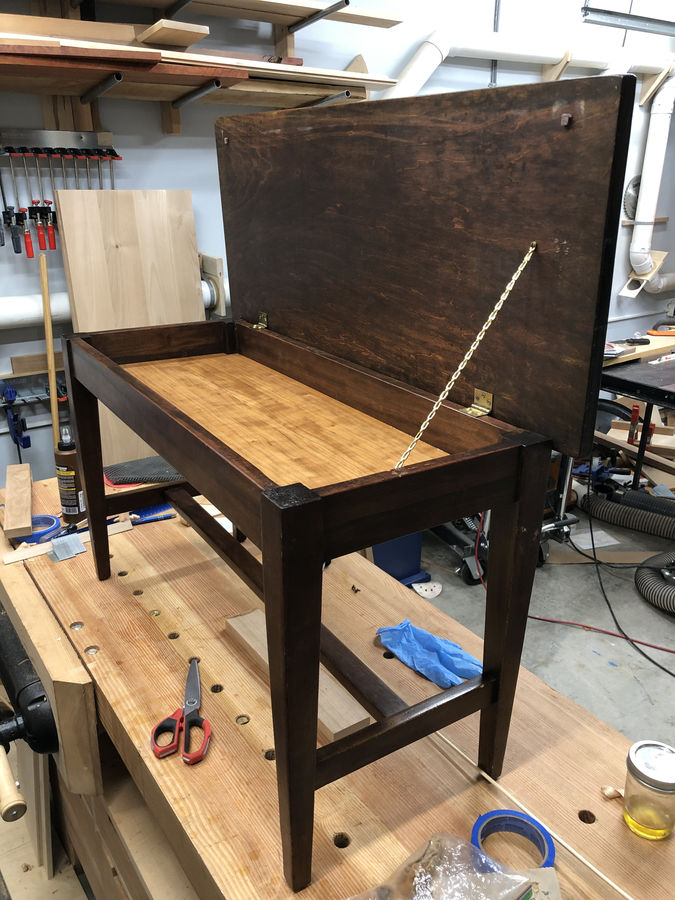 The new bottom was cherry which all things considered provides a fun contrast to the rest of the bench. Granted it will be unseen 99% of the time. I also added some small felt bumpers to the lid so it no longer shuts loudly. For a fairly low effort repair, this turned out fantastically.

Wow really fantastic what a great restoration! This bench will last for many more years in this age of disposable everything!

I've done one almost exactly the same, although I had to completely replace the rail with the hinges. If that's the same as mine, those are fairly large dowels. Mine is no museum piece and it's used every day, so I just went with epoxy. I don't remember if I glued the bottom, but I do remember that the bottom panel was not a good fit, too. Nice job.

Thanks. I strongly believe in repairing everything we can instead of disposing and buying new. The bench itself isn't a showpiece, but for piano lessons and a family with young kids, it fits right in.

Wow really fantastic what a great restoration! This bench will last for many more years in this age of disposable everything!

The dowels were fairly beefy at 1/2". I really considered using epoxy from the beginning, but I honestly enjoy working with hide glue more and like the idea of repairability even though the chance of doing anything that would involve steaming a joint is very very small.

I've done one almost exactly the same, although I had to completely replace the rail with the hinges. If that's the same as mine, those are fairly large dowels. Mine is no museum piece and it's used every day, so I just went with epoxy. I don't remember if I glued the bottom, but I do remember that the bottom panel was not a good fit, too. Nice job.