It was time to replace the 5 year old Walmart pressboard TV stand. The desire was for as few open areas as possible - hide all the stuff behind non-glass doors and in drawers.  This project had a ton of firsts for me:

By far my largest and most complicated project.  But I learned a lot, got to apply new techniques and ways of working through problems, acquire several new tools, and gained confidence for future projects.

I have some design features that I'm proud of.  For the cord pass-throughs, I cut out a square section, and in that I mounted a 1x2 that I had cut a channel in for the pass through.  I mounted that in the ply so that I had hardwood all around - no visible MDF core showing.  I did that on the top of the back of the cabinet and on the shelf in the open area so that I could have stuff on either shelf.  The opening for the pass-through is not visible at all in the finished product.  The other big one is the door closing.  I was going to have a sliding latch like in the concept I based it off of.  That would have been the door pull as well as the holding mechanism.  When I got into it though, I didn't like how the latches were coming out, so I routed some finger holds into the top rail of the door.  I mounted magnets on the inside of the door behind the hinges to hold the door closed.  I didn't want the magnets that stick out into the door opening or to see them when I open the door.  They do the trick nicely holding it shut (and acting as a soft close) and they're invisible.  I'd do that again.

Next time, I would do under-mounted drawer slides instead of the side mount, leave more thickness on the panels before glue up, maybe use biscuits to help with panel alignment at glue up.  I would do that finishing schedule again. 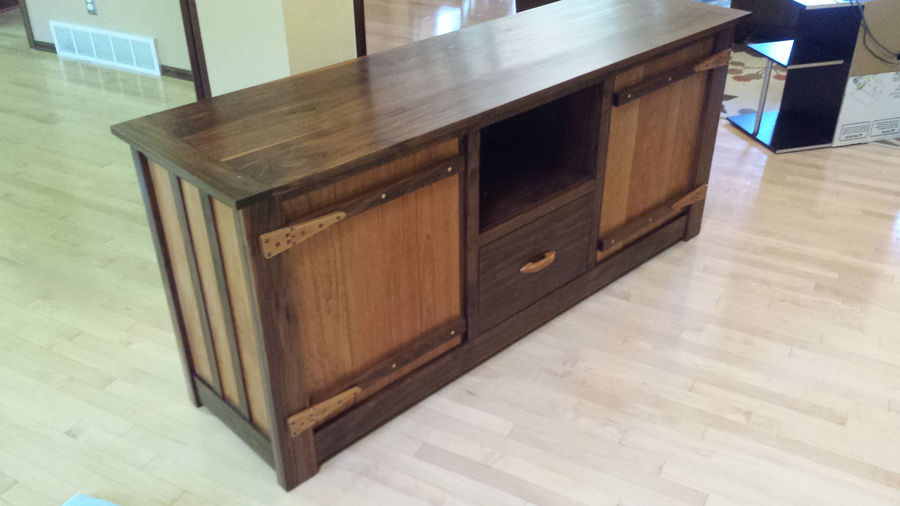 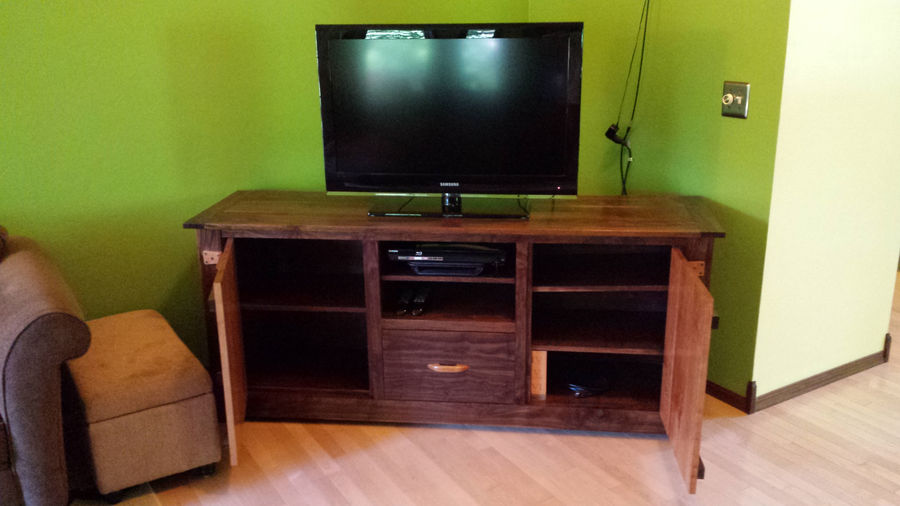 Loaded the shelves in and positioned. 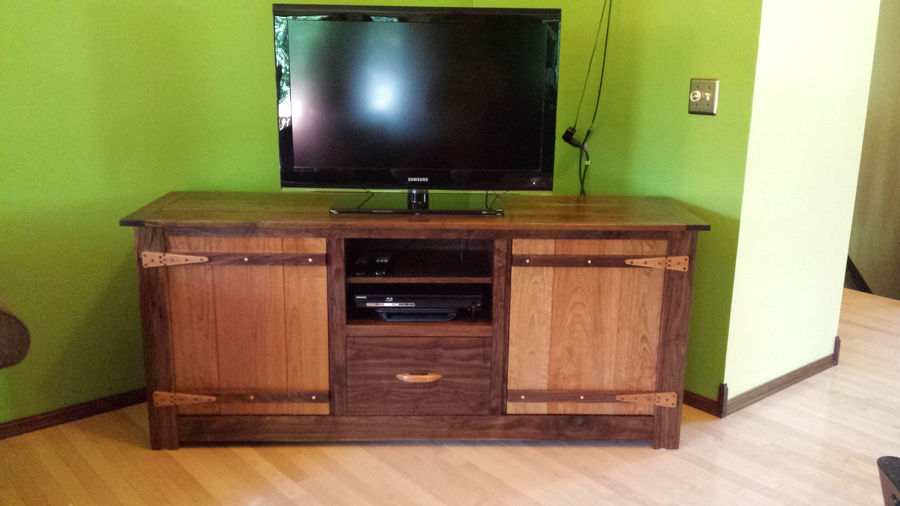 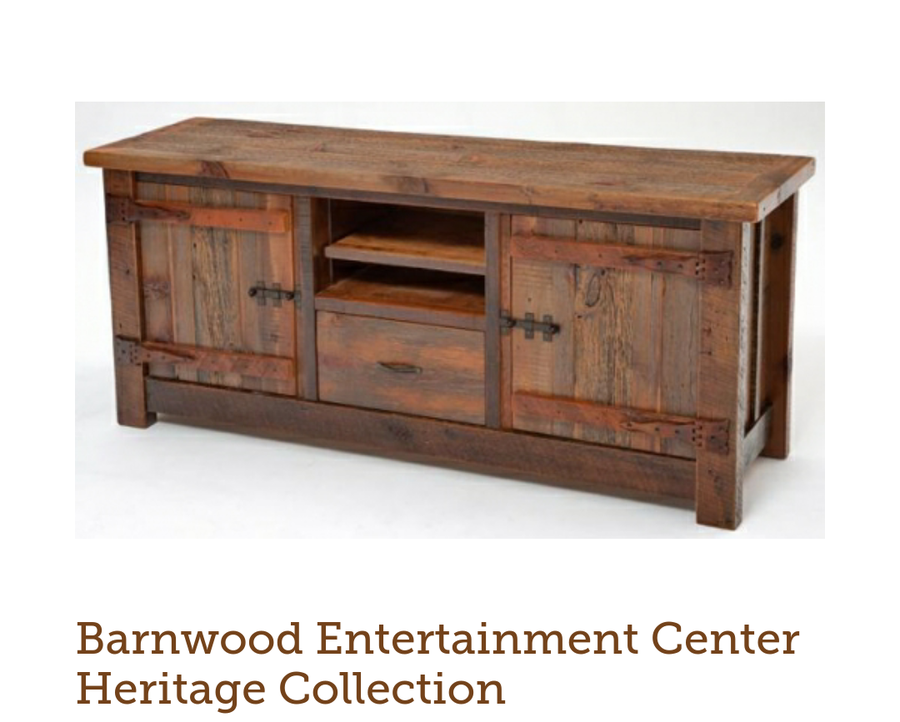 The inspiration.  I modeled the plan in SketchUp to work through the details of the build. 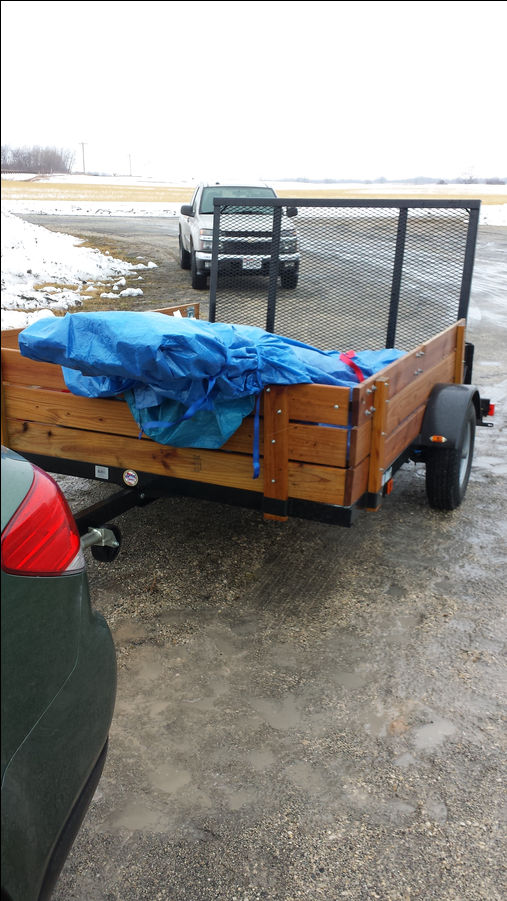 First trip to the lumberyard on a questionable weather day.  It was an experience.  I expected to find shorter and narrower stock, especially for the walnut.  Ended up getting fairly wide (7-8.5") walnut, and 10' long.  My 8' trailer was not expecting that. 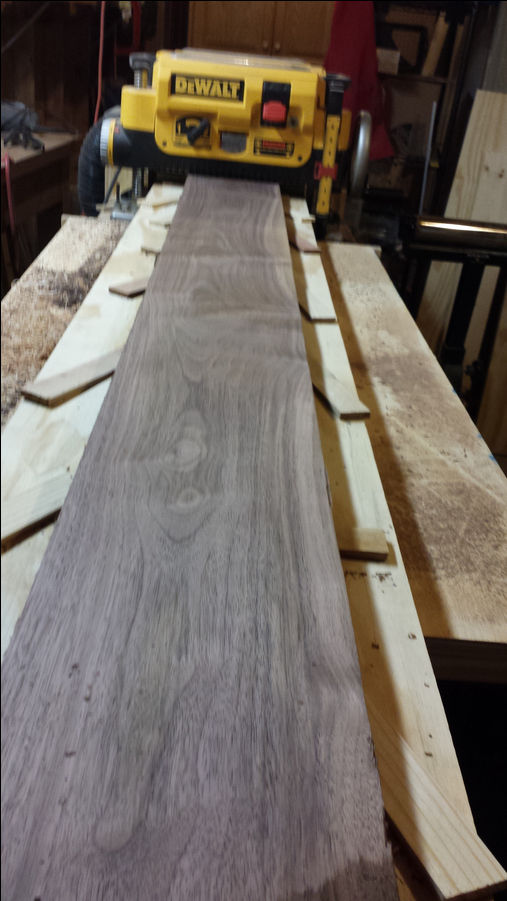 Jointing with a sled on the planer.  So cool seeing the grain of a board, especially the walnut, for the first time.  Still gets me with each new board.  Planer and stand were purchased/built before starting the build. 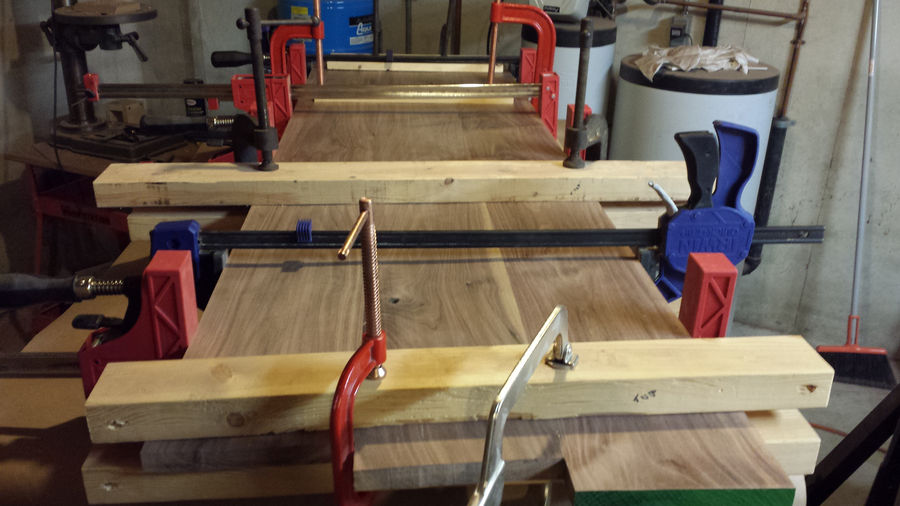 All the clamps (at the time).  The cauls weren't enough to keep the top flat.  Biscuits maybe for alignment next time, maybe more/bigger clamps so that I can reorient the cauls for more rigidity.  The misalignment on the top required some handplaning and scraping to clean up.  The (poor) handplaning caused some tearout to deal with. 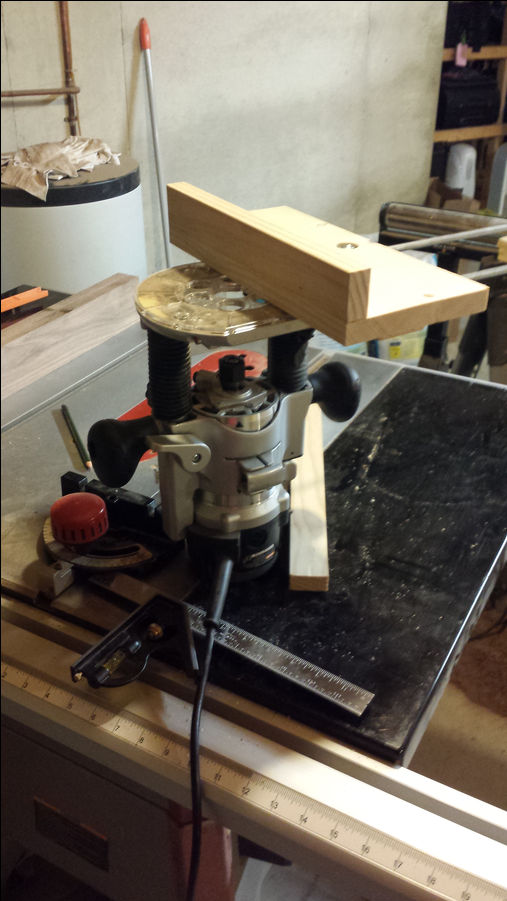 Made a router edge guide instead of paying $70 for one.  I got what I paid for.  A pain to adjust, but it worked and was used for several operations from mortising, to the slotting, to later some sliding dovetails. 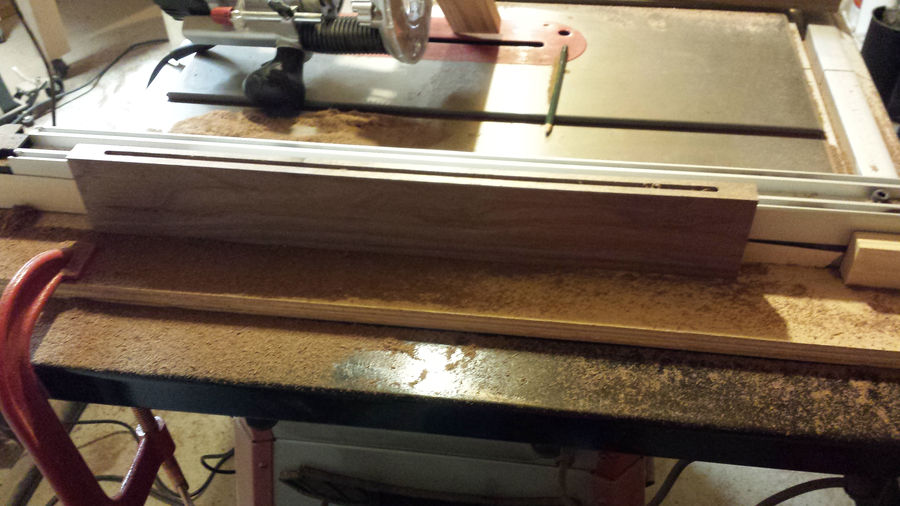 Mortise for the breadboard ends.  Made with the router, my new edge guide, and a 1/4" upcut spiral bit. 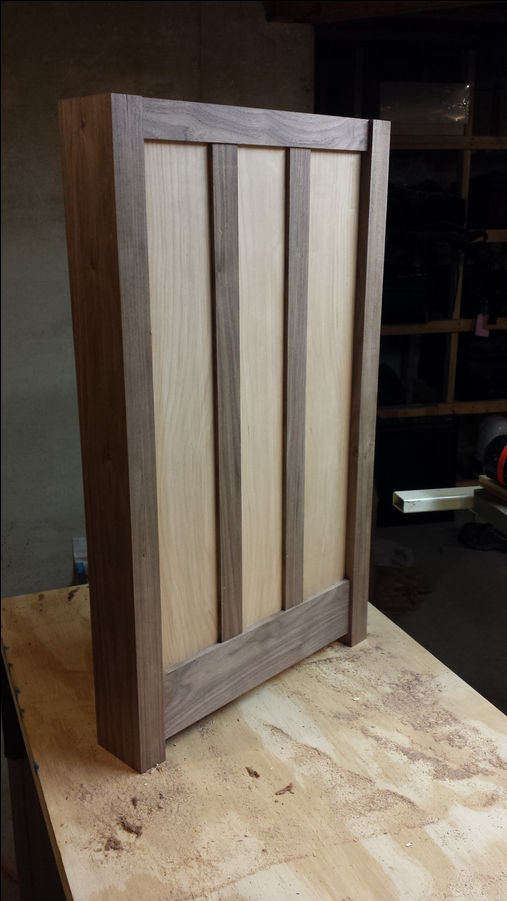 Jumping ahead a bit, the sides with floating panels.  4/4 cherry was resawn to about 3/8".  The outside panels have matching grain.  The inside panel was from the next cut down.  The opposite side has the same arrangement. 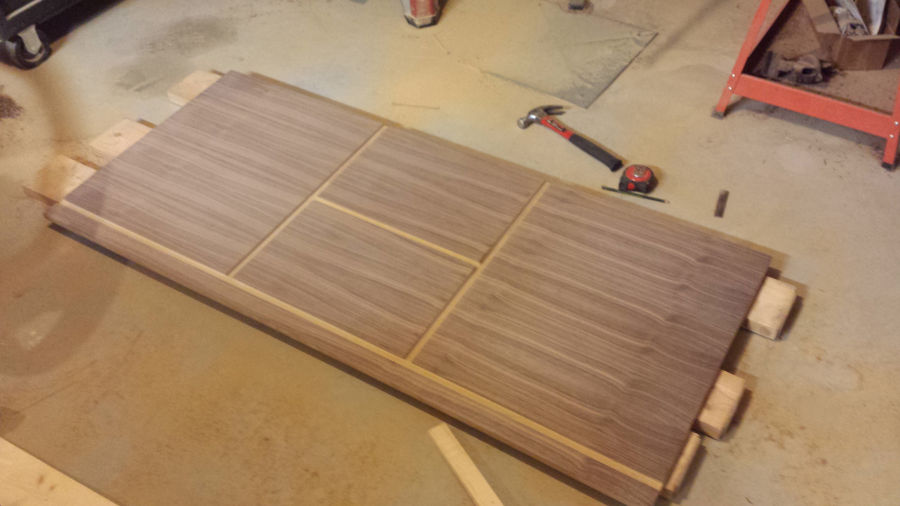 3/4" walnut ply (actually MDF core).  I bought the plywood-sized router bit for the dadoes (23/32" if memory serves), then found out that my ply was slightly thicker than that.  I had a few more dadoes in the bottom and vertical dividers for the fixed shelf.  Lots of aggressive hand sanding to get the ply to fit into the dadoes.  Test fitting was my friend. 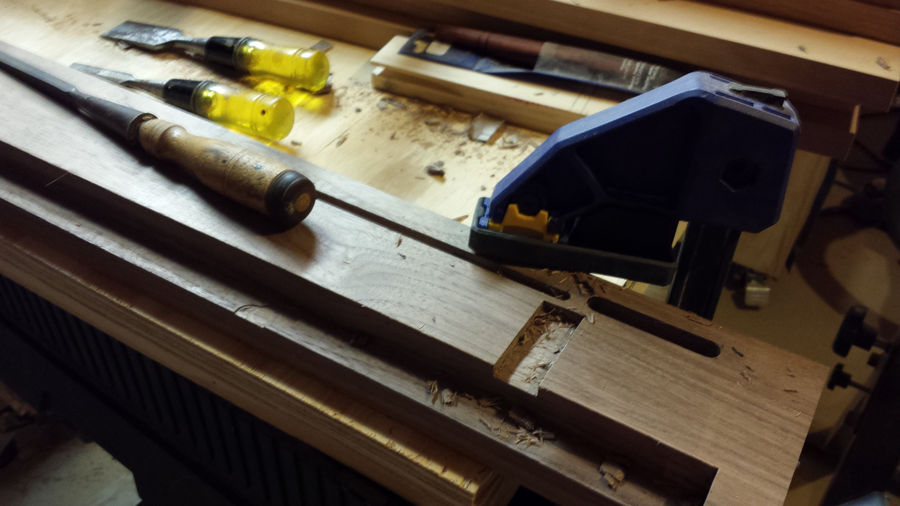 Hand cut the slot for the bottom to fit into the back leg.  First time handcutting like this and proud of the results.  Used my marking knife to get them where I wanted the slots to go and get the size right.  Fit like a glove right away. 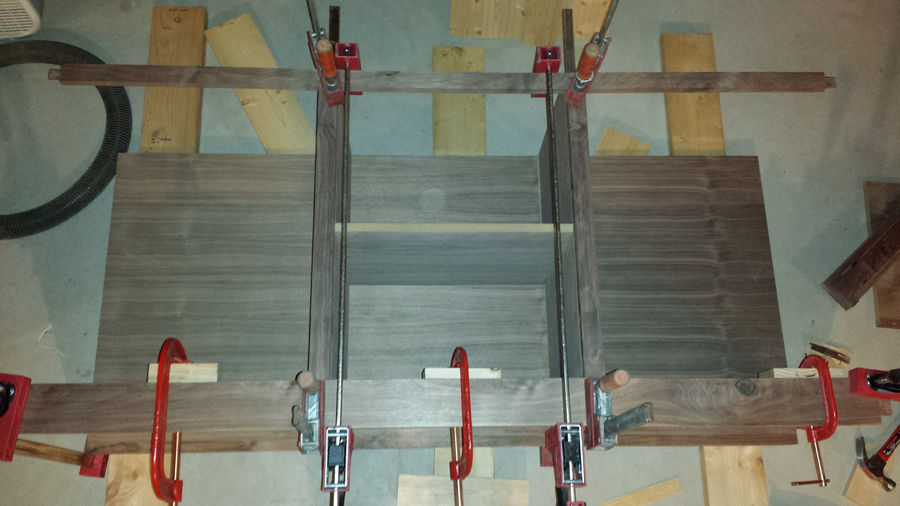 Dry fitting the front frame to the plywood and used all of the clamps again.  Test fitting was again my best friend.  Found all kinds of things to look out for, things to not worry about, places to check square and size, developed a strategy for when the glue was on.

Real-deal glue up.  Note the use of weights as a clamp.  Gotta do what you gotta do. 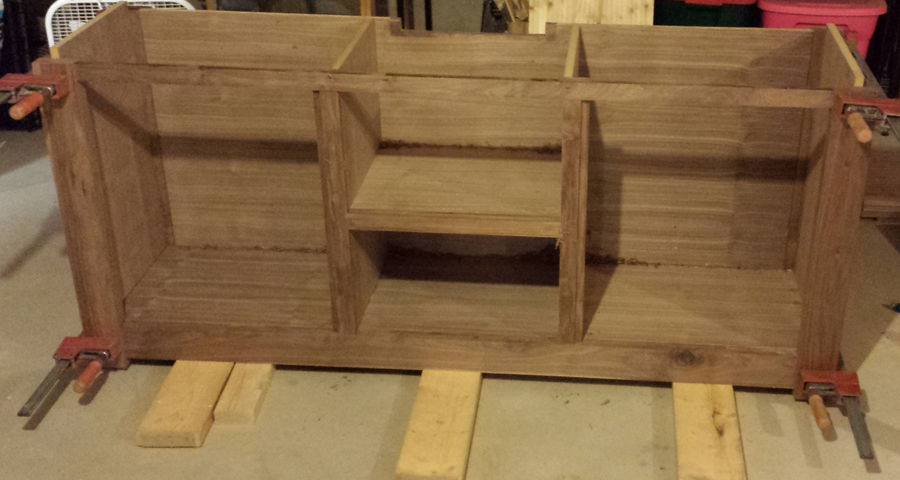 First time standing up and mostly assembled.  The sides did not get glued up yet. 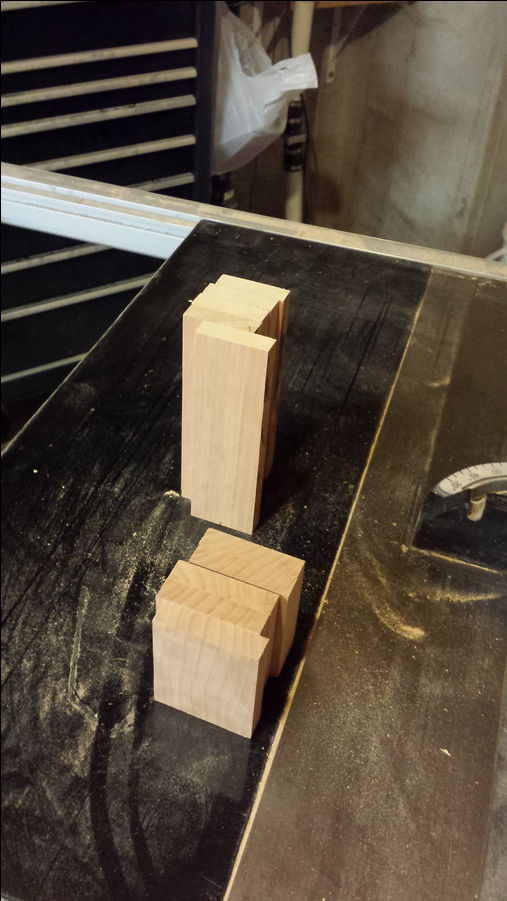 The start of the hinges.  Resawed the cherry down to 1/2", cut into my two hinge components.  Made extras of both to test the process before doing it for real.  The idea was to do a finger joint, but had a heck of a time making the jig.  I didn't make a proper jig, but I had a process to keep everything centered and even, knowing that I could trim off the outside to get the shape right. 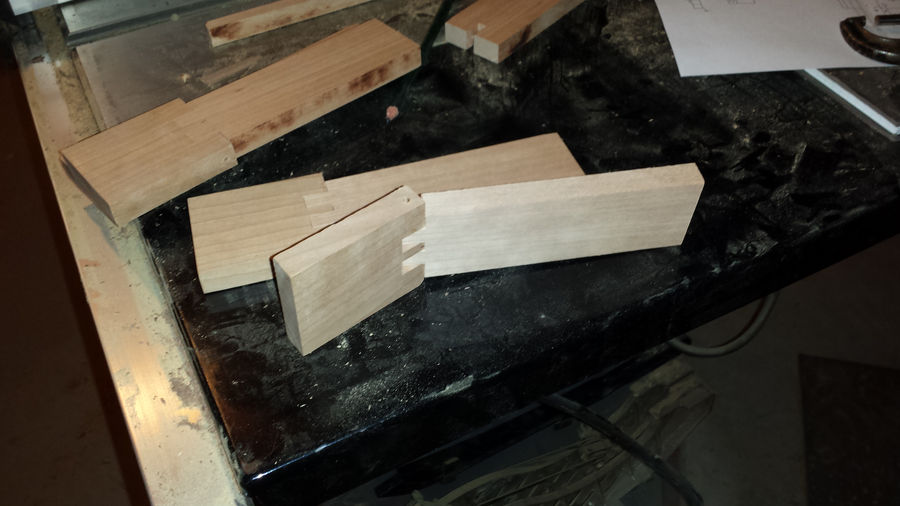 Successful enough finger joints.  They're tight, but they do move.  Drilled the holes for the hinge pins with both parts together. 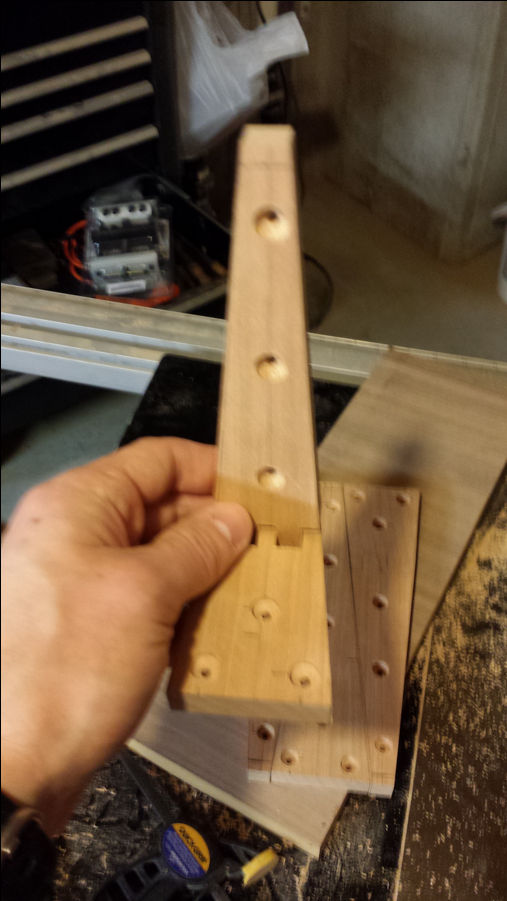 Skipped a couple of steps.  I cut the sides on an angle by just marking out on each piece and lining up each cut on the table saw.  Each piece was held down together and cut at once to get the alignment.  Drilled the pilot holes for the screws and the sets for the plugs to cover the screws. 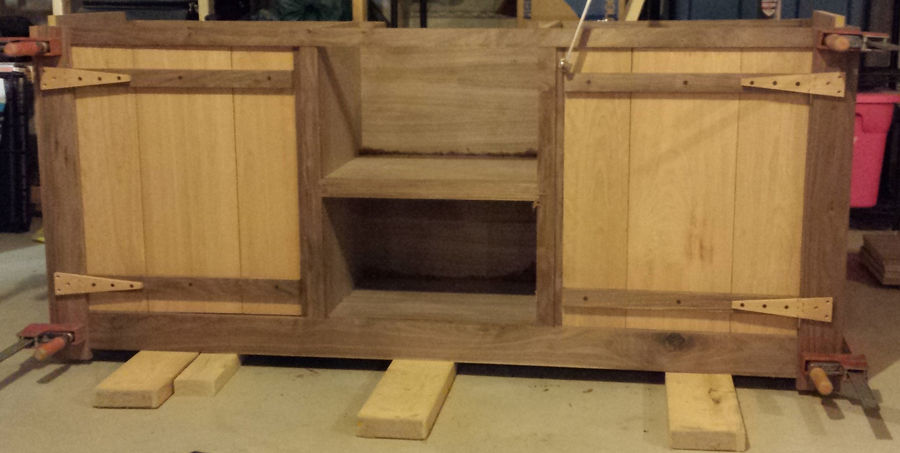 Skippped a few pictures again, but nothing too exciting.  Door planks are ship lapped for expansion. 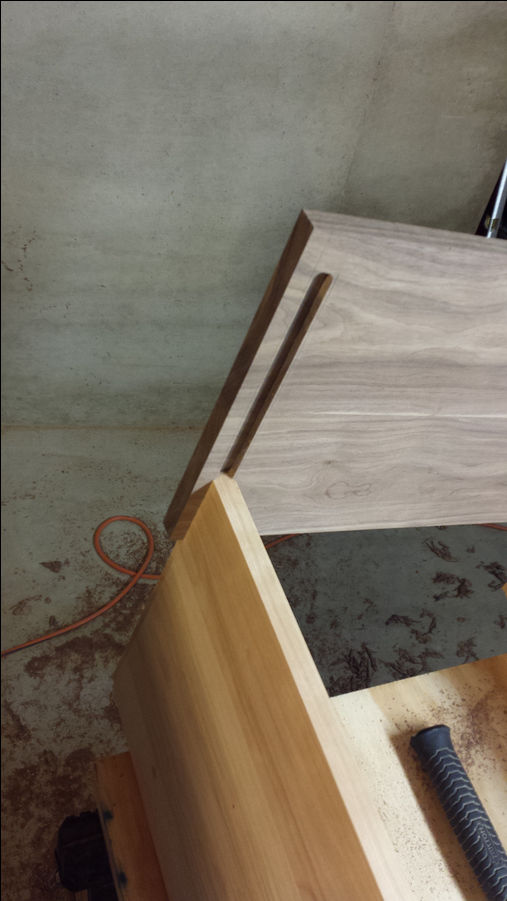 Drawer assembly coming together.  Sliding dovetails to attach the front to the sides.  Back and bottom are dadoed. 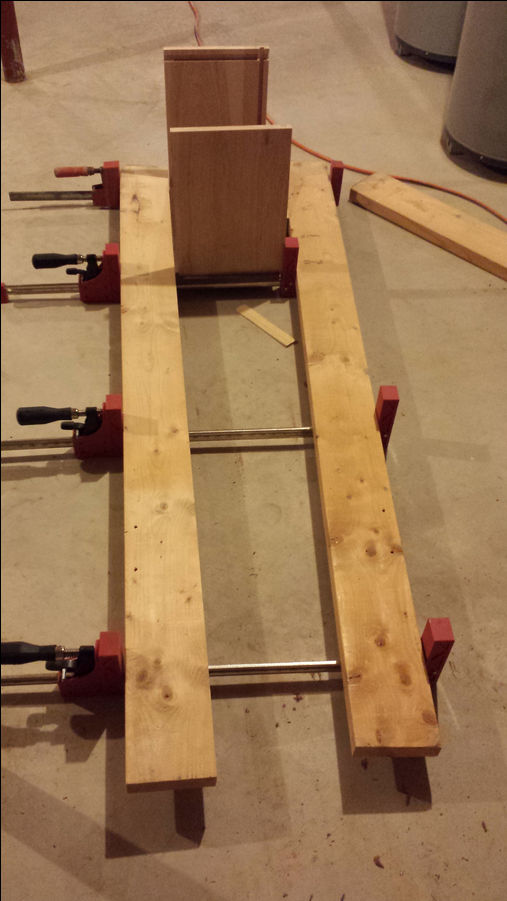 So, one thing here.  If you ever need to use 2x6's and a bunch of clamps to try to close up a sliding dovetail, it's probably too tight.  If the 2x6's bend, it's definitely too tight. 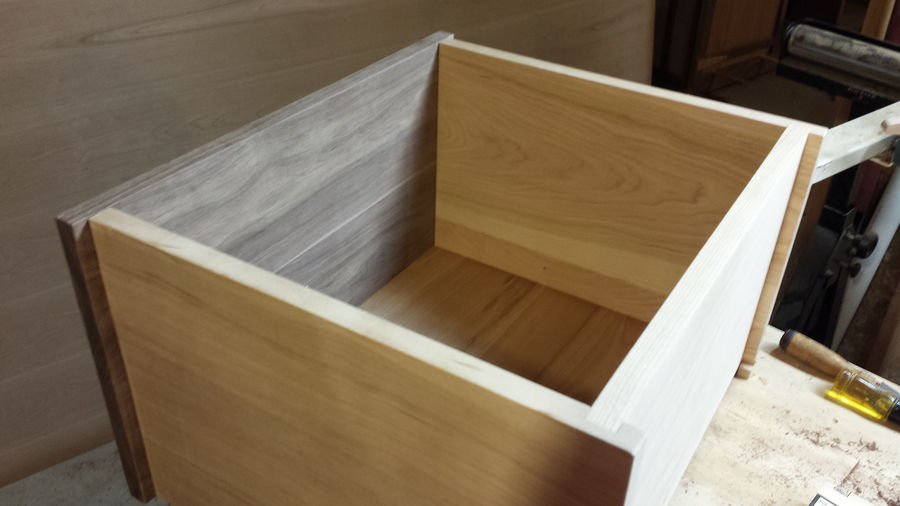 Opened up the sliding dovetail.  Closed it down.  The drawer bottom is 1/2" cherry ply. 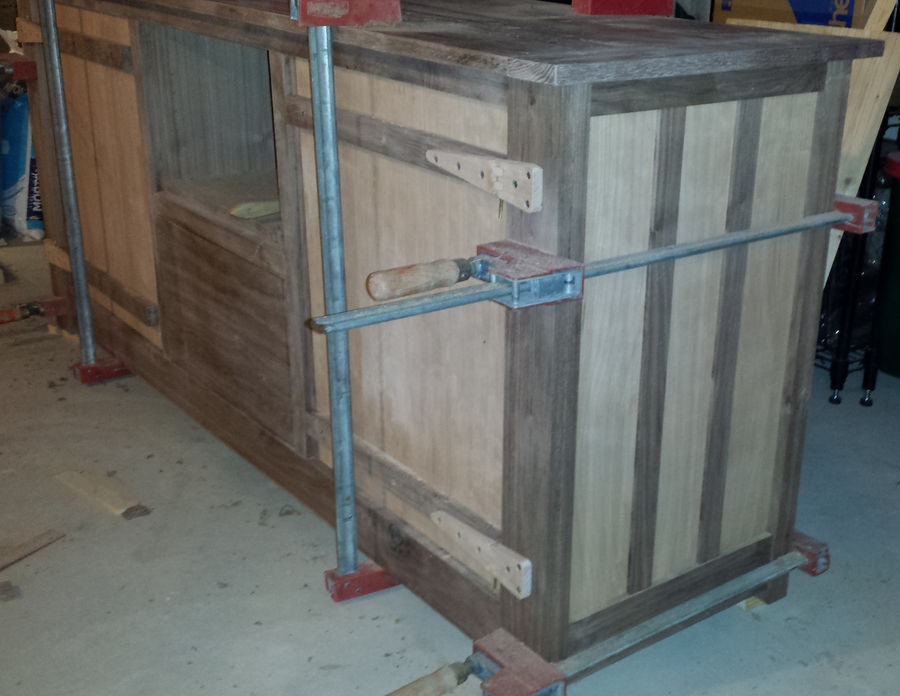 Fit the drawer.  It was a huge pain to get even gaps, get the face level with the frame, and prevent the slides from racking.  This is the final fit up before beginning finishing.  Checked the tabletop, sides, doors, and hinges. 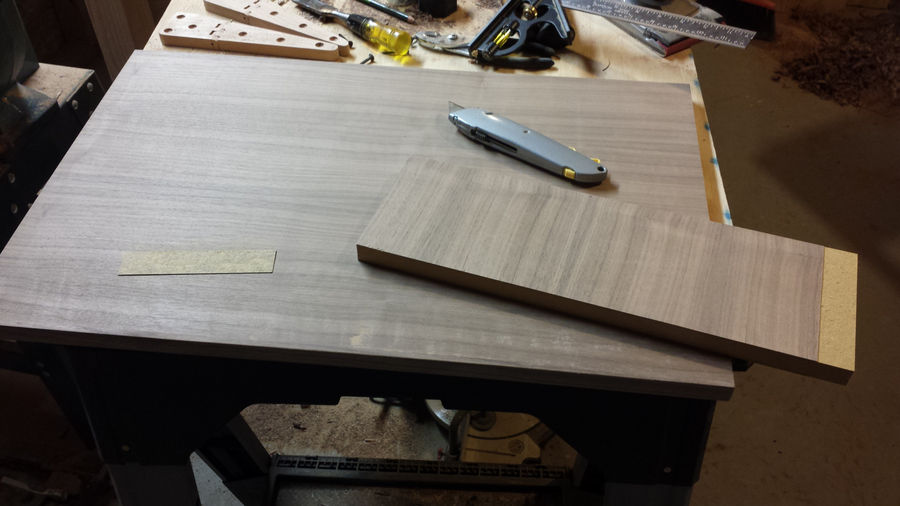 Ok, one last thing before finishing: making the shelves, I put some solid wood on the front edge.  To clean up the edges, I planed them level.  I had some tearout on the plywood.  To repair it, I cut out a square section from a scrap piece, cut a similar square around the tearout, lifted them off, then glued the replacement in.  It worked out fairly well. 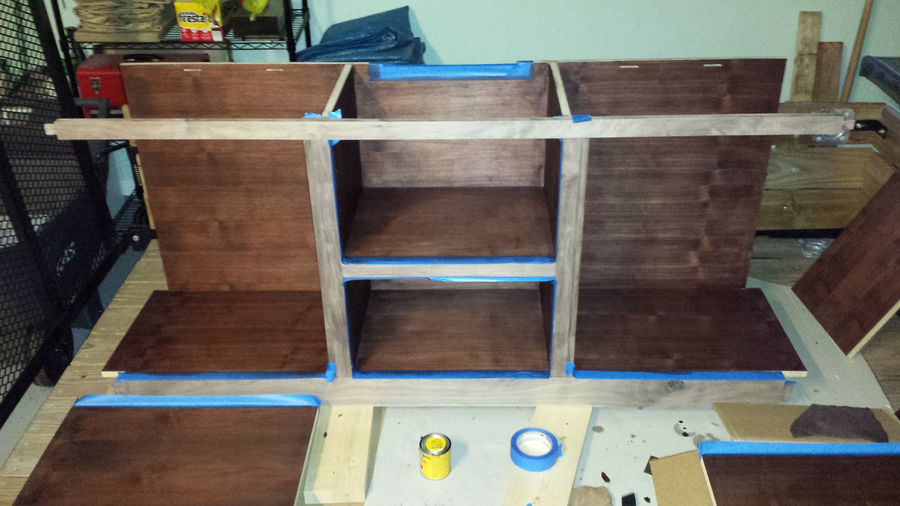 My test finishing showed that the walnut ply didn't color match the solid walnut very well.  I went through several stains to try to get a color match and finally settled on Minwax red mahogany.  I masked off the solid wood and applied the one coat of stain. 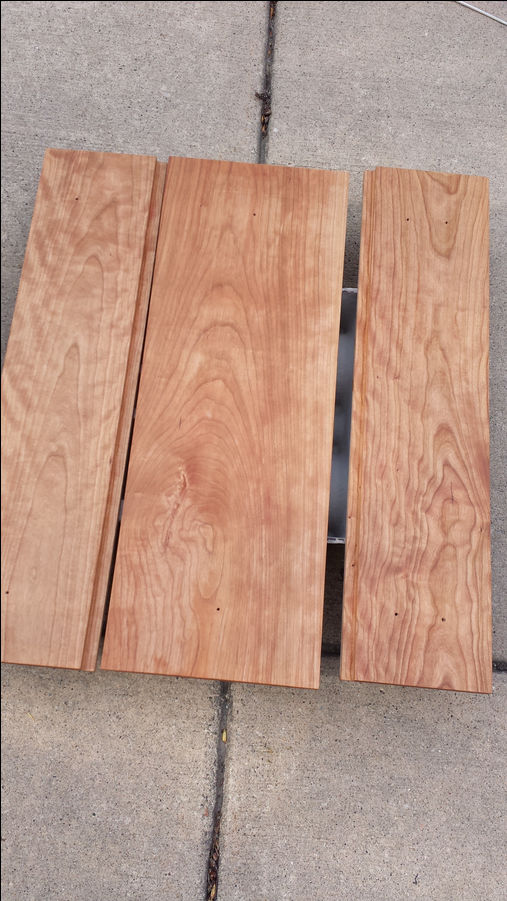 Next was the tung oil.  This is the first coat on the cherry in bright daylight.  Very nice. 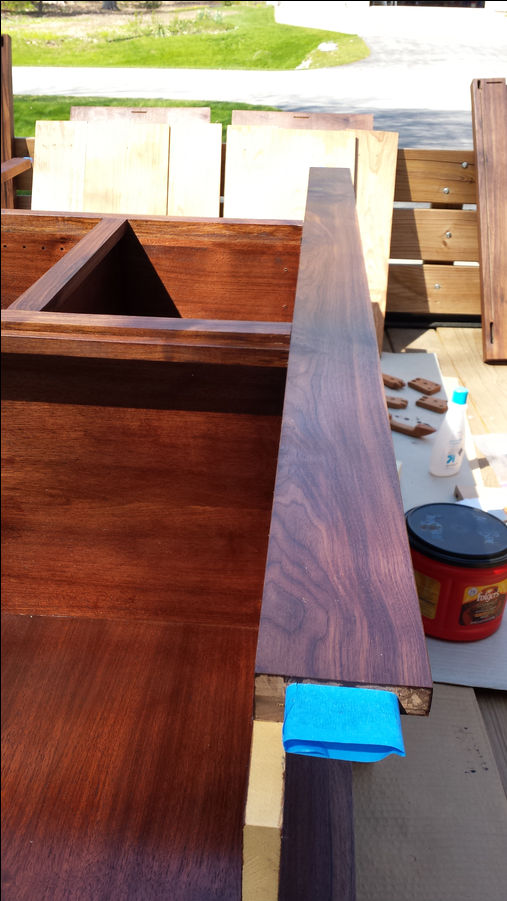 A few coats of tung oil in to the cabinet, really loving the look on the walnut.  Color match of the ply isn't perfect, but it's close enough. 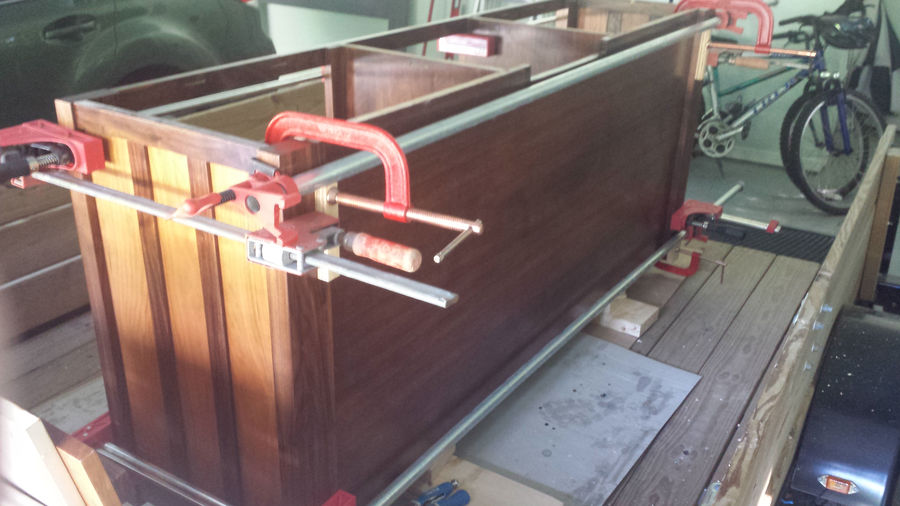 After the tung oil, gloss polyurethane, and satin polyurethane, it's time to bring the assembly together.  Using just about all of the clamps again. 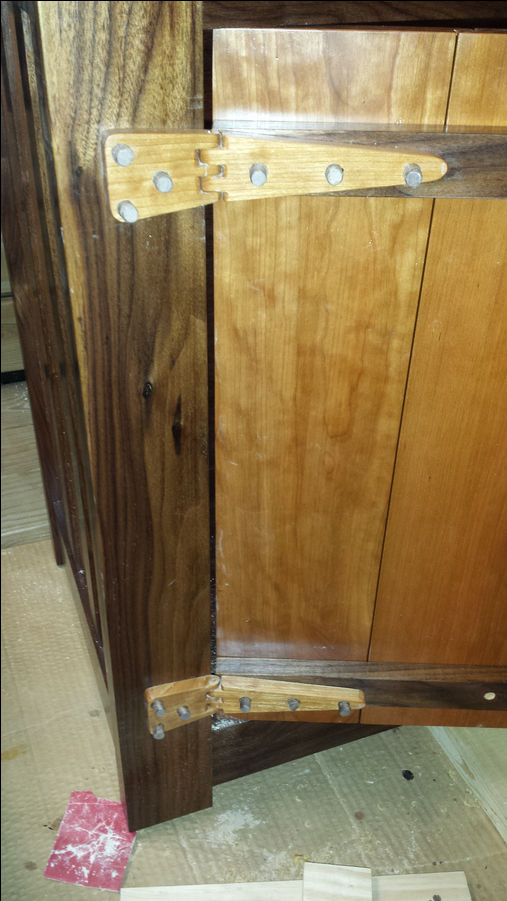 This part was nerve wracking.  It's one of the last steps to insert the plugs, trim them flush, sand, and refinish.  I did the door panels off on the side before mounting the hinges, but now I have to do them on the hinges/doors as mounted.  The plugs needed some more depth to sit better, but they were also very tight.  I was concerned that the plugs would break rather than trim. 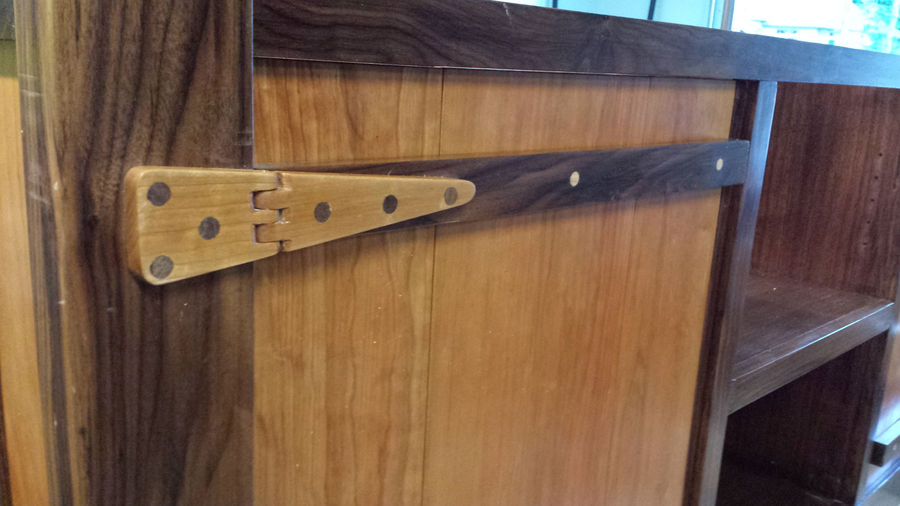 It took a while with the flush trim saw (which I left very proud) followed by a sharp chisel, but they're done.  Sanded flush, another couple of coats of tung oil, gloss poly, and satin poly.  Touch-up work in other areas too. 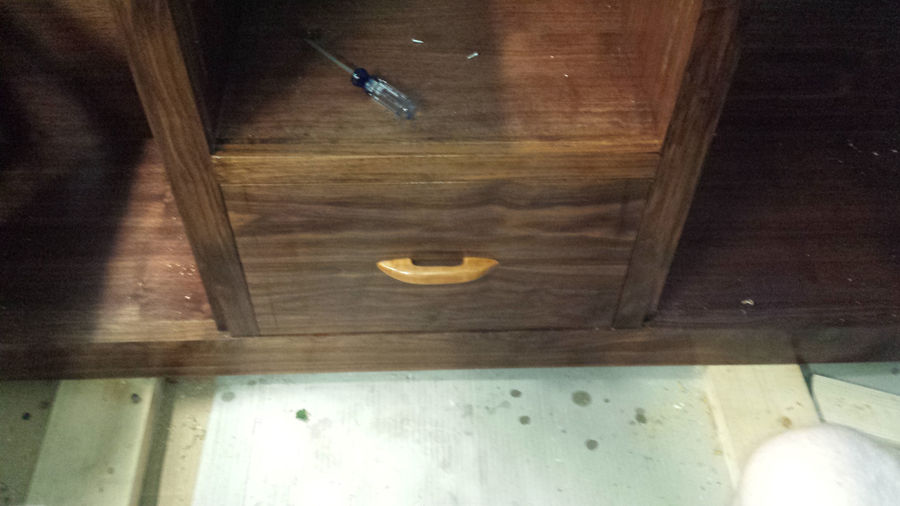 Re-mounted the drawer with the handle in place.  It went much faster this time, having learned a bit on the initial fitting.  The handle is cherry, cut on the bandsaw, shaped with a drum sander on the drill press.