For the Reddit r/woodworking Dovetail challenge, I decided to finally tackle a project I've been meaning to work on for a few months:  a memorial case for the flag my family was presented at my grandfather's funeral in November.  My grandfather grew up during the Great Depression, served in the military until retirement, and raised a large and loving family.  To honor his roots and the connection we have to our family, I built the case completely out of cypress taken from our family's land there.

If you're looking for perfect dovetails, this won't be for you.  But, it's a special wood (in rarity and in sentiment) and I wanted to think outside the (90 degree) box (literally and figuratively) when contemplating a way to incorporate dovetails.   This was really something I did for my family and myself, but I also know my grandfather would be proud to know that I made this and would want me to share the process as well. 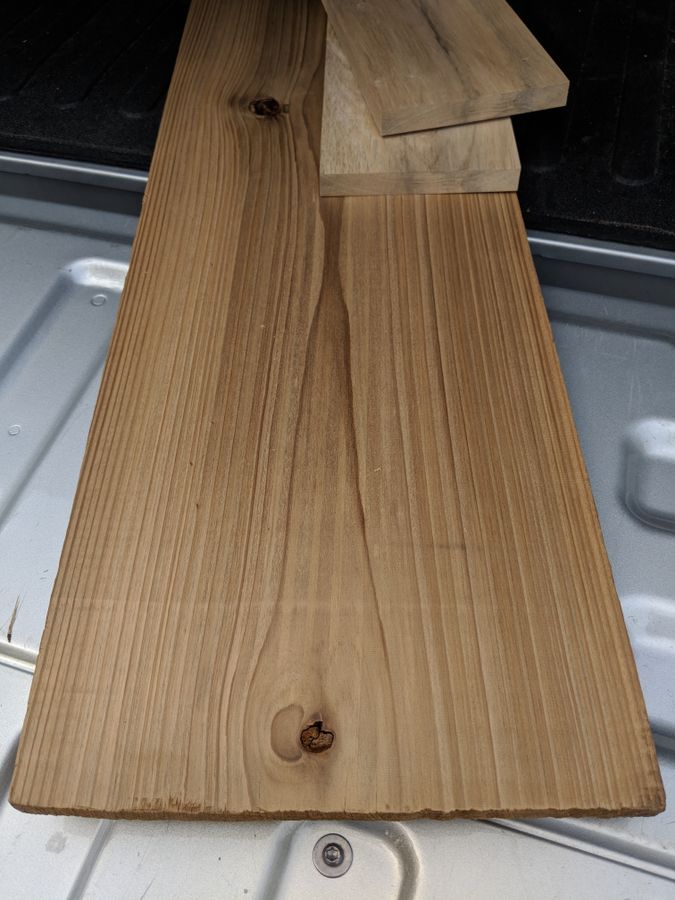 The sinker cypress I had to work with.  This was reclaimed from my family's property.  I don't know how old the tree was, or how long it had been in the mud, but the character is beautiful. 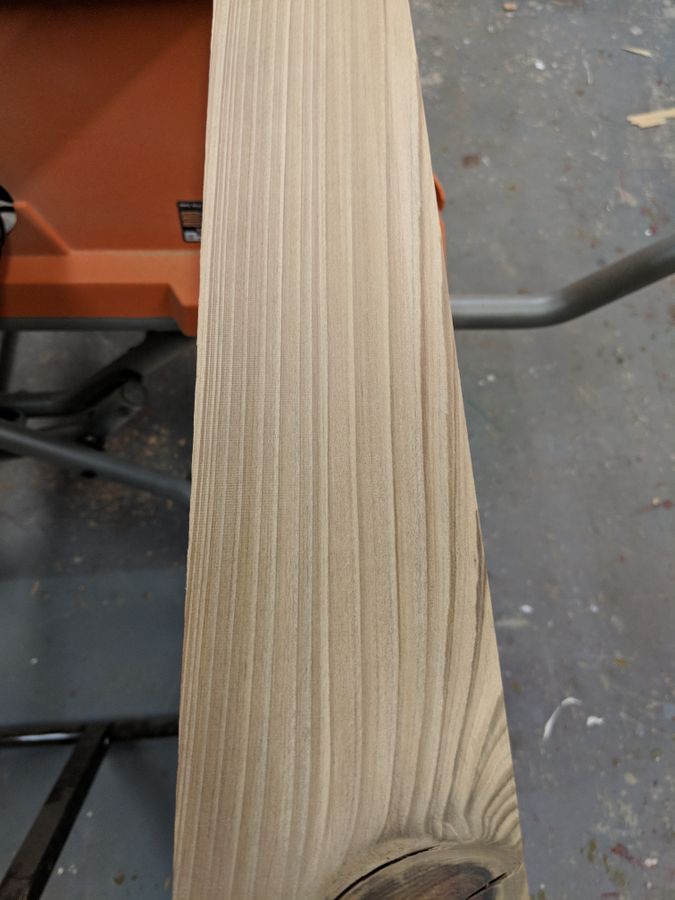 Using these plans I began ripping down the cypress.  Really the only change I made to the plans was that, instead of just gluing the joints, I added dovetails and dovetail splines. 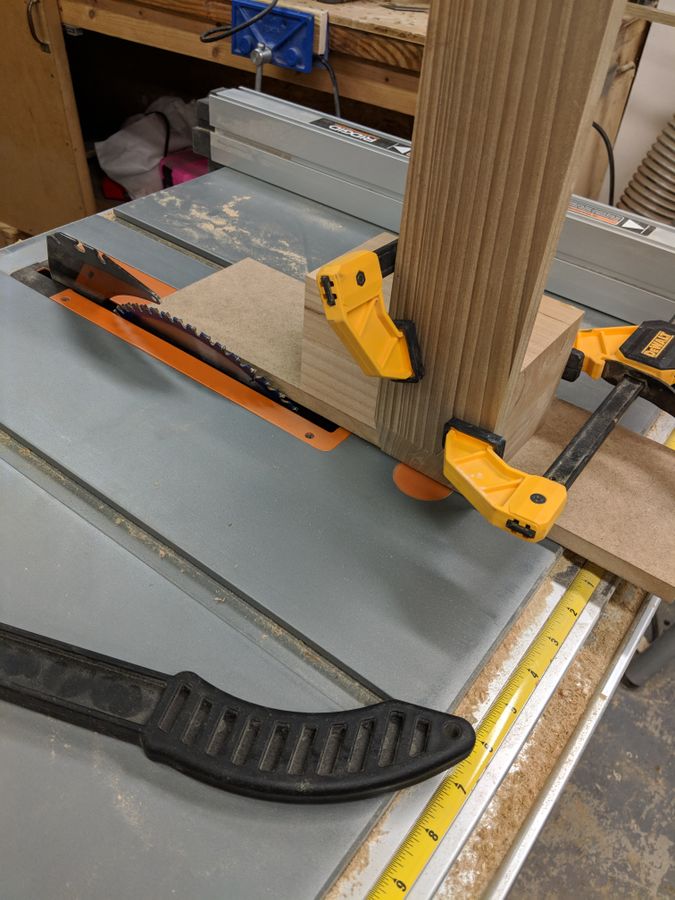 To get the necessary 22.5 degree angle, this was really the best option.  I also build a 45 degree miter sled for my table saw, with a 22.5 degree piece I added on to cut the molding that gets glued on. 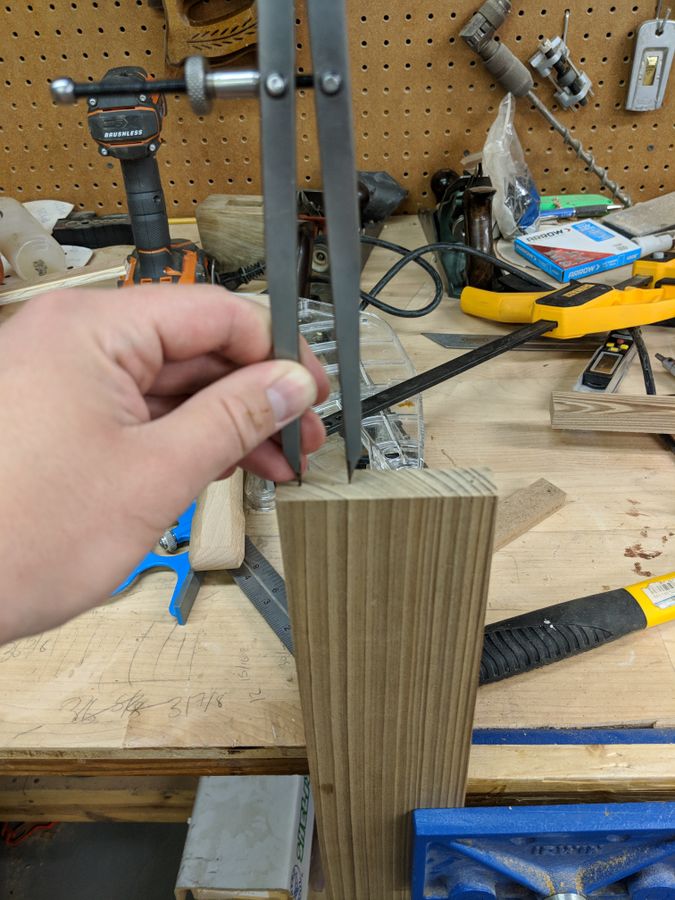 I'm sure there are many ways to layout the dovetails, but the dividers method was by far the easiest for me.  It worked really well.  I used a bevel set to 7 or 8 degrees to mark the angle, I honestly can't remember. 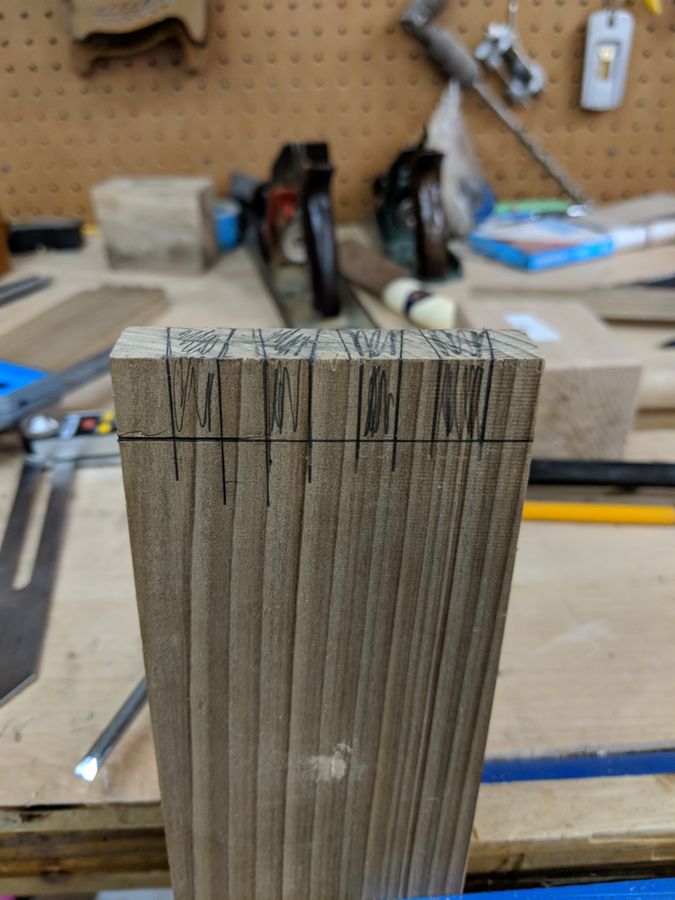 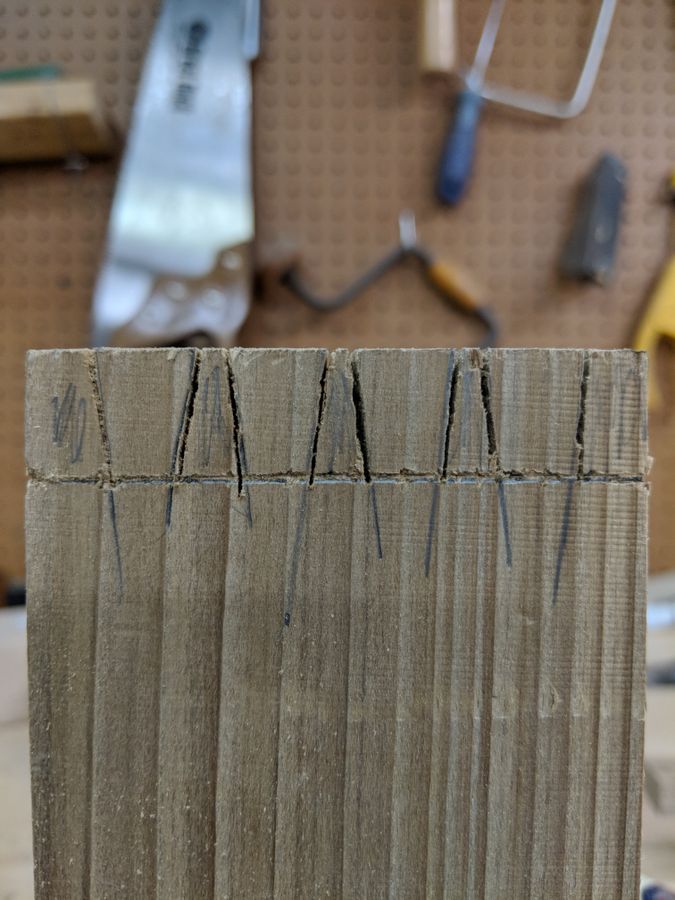 Using a Japanese style dovetail saw I got off amazon, I was able to cut the pins. 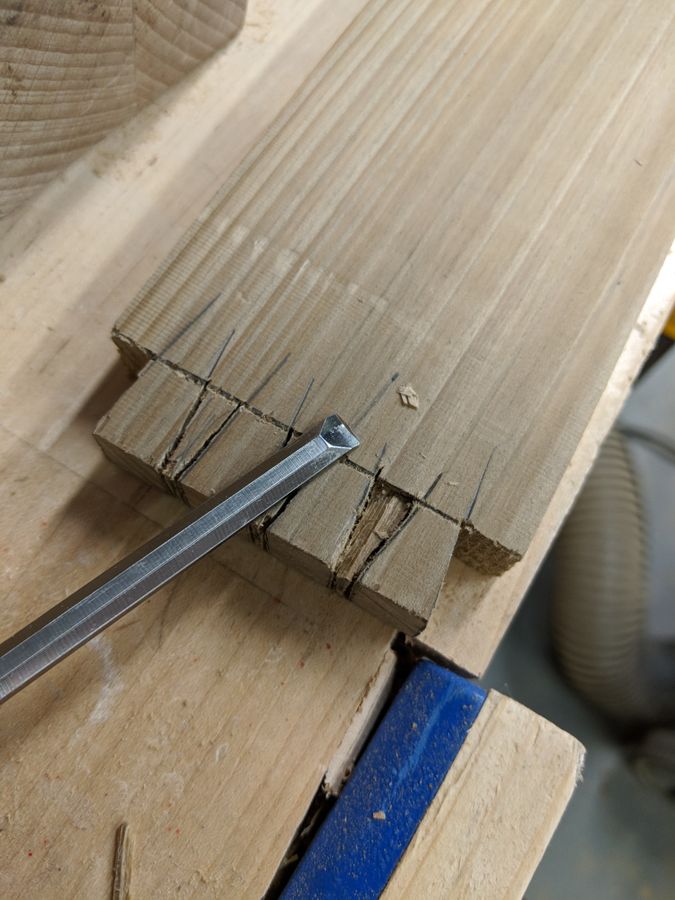 It was about here that I realized how brittle this sinker cypress is.  It would continue to cause me issues, as the cypress wanted to splinter really bad.  My chisels are sharp, but this wood just didn't want to cooperate. 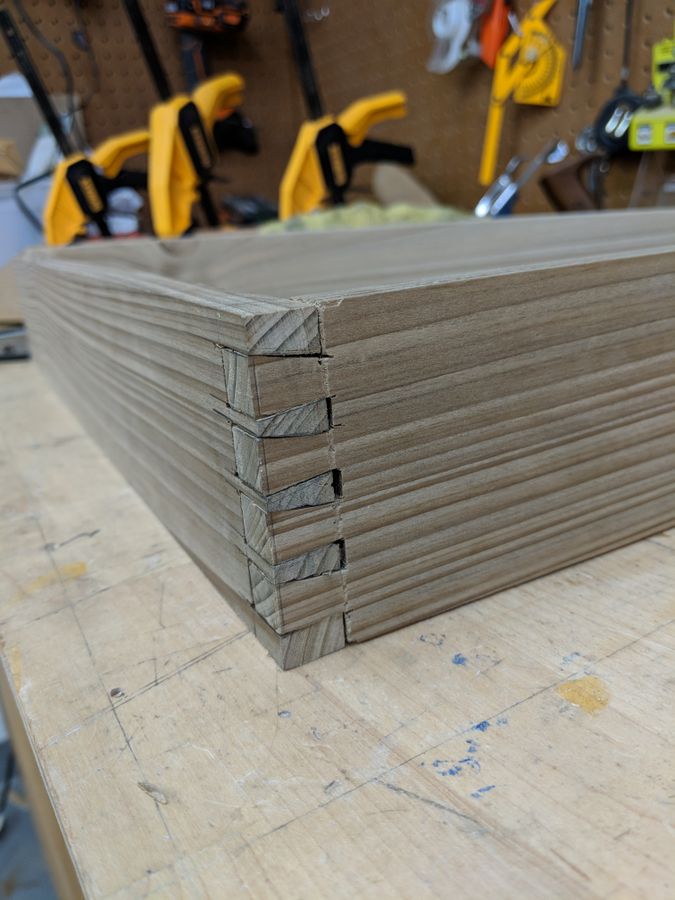 The fit.  It's not perfect, but these were literally the first handcut dovetails I've ever done, so I am happy with them! 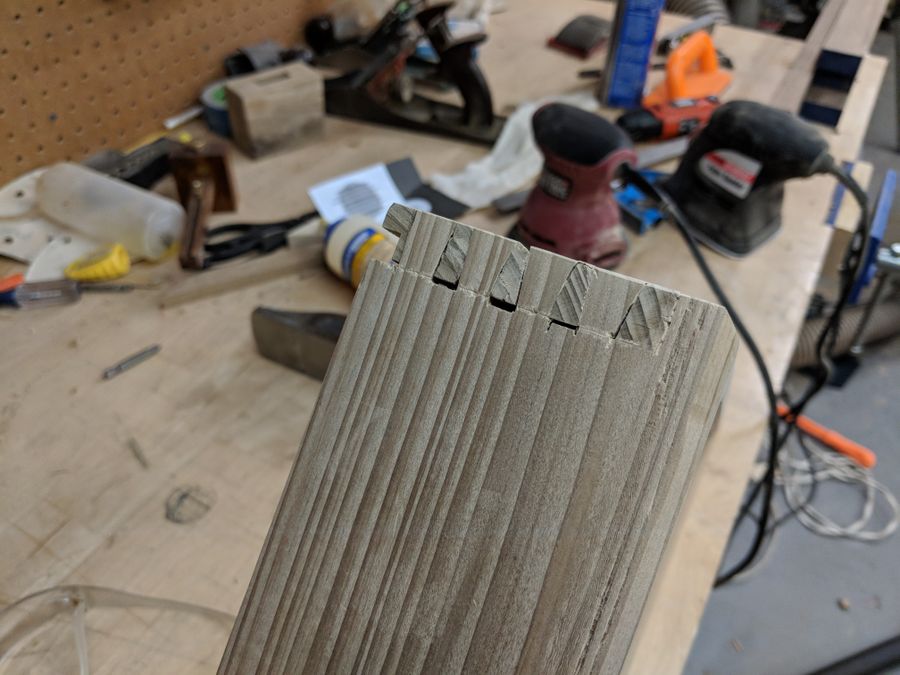 Again, not perfect, but I am happy with them.  Also, a lesson for others to learn from my mistakes.  Don't make your rabbet cut go through your dovetails!  I think my family will forgive me for that mistake. 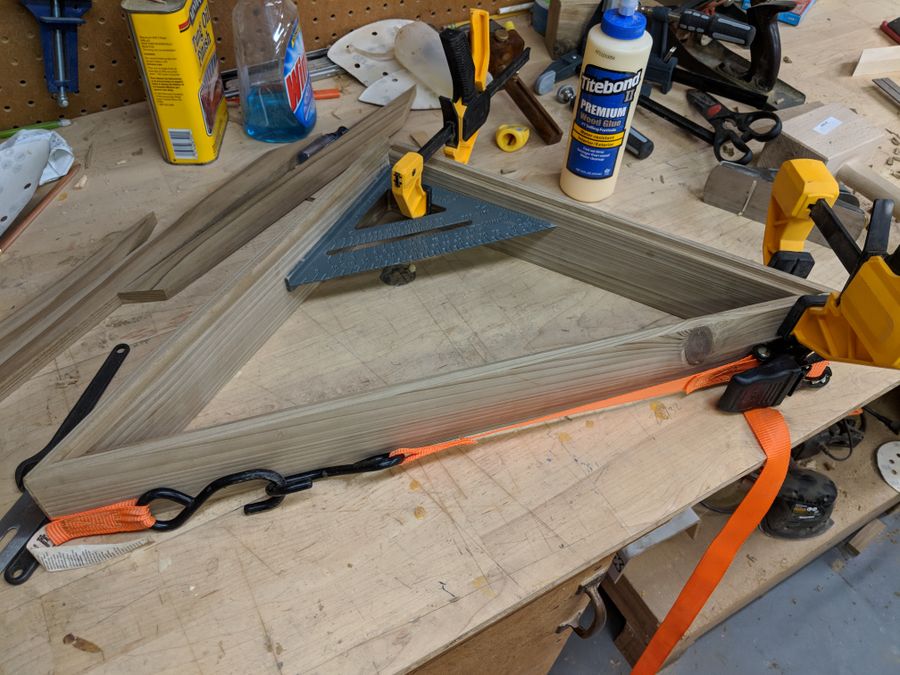 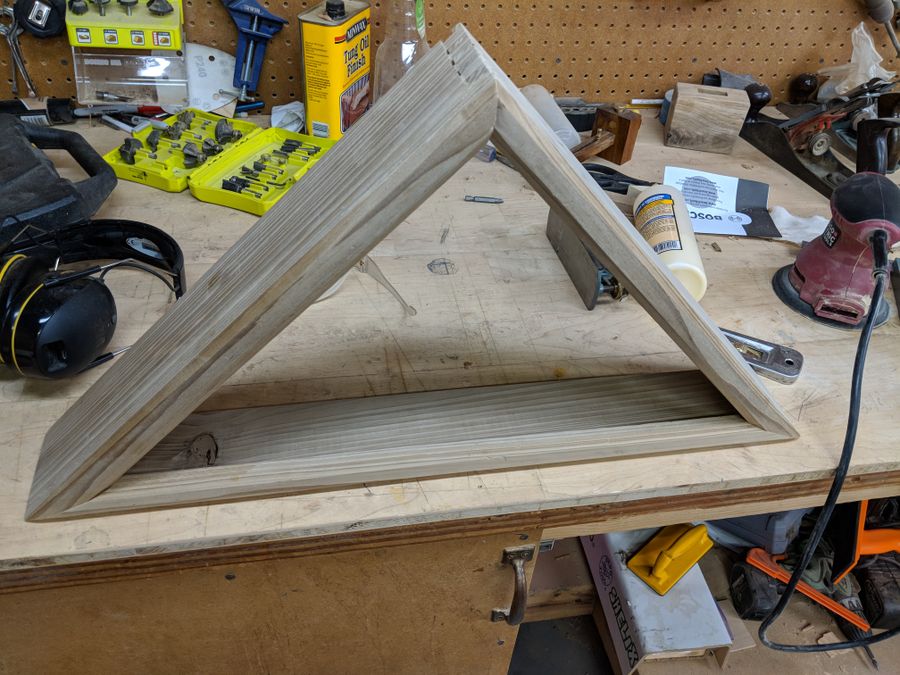 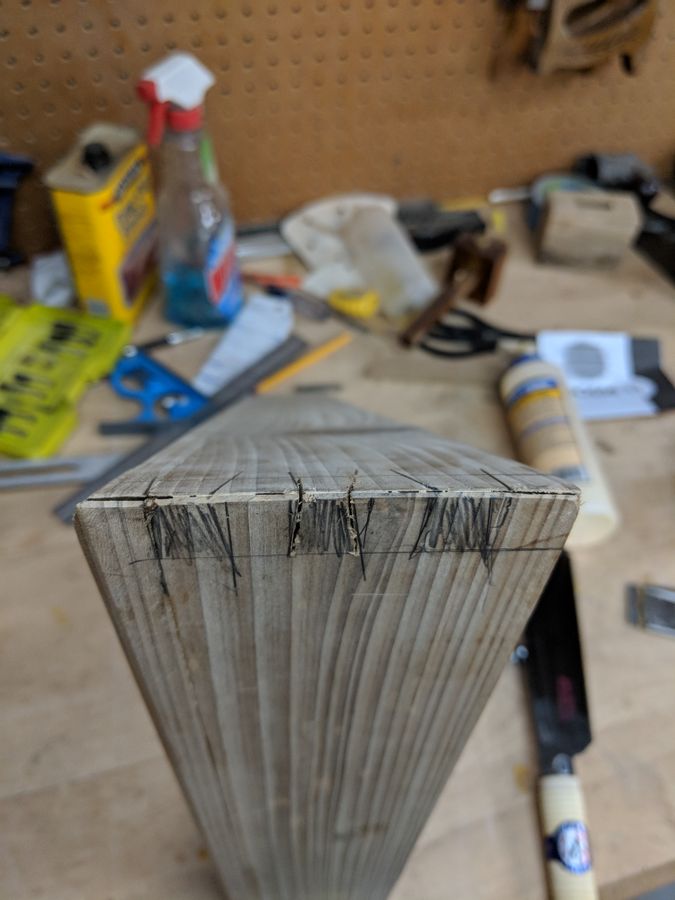 Now it's time to mark out the splines.  I used the same dividers method, but opted for only three splines since I was worried about the very thin ends on these 45 degree joints.

Use a saw and chisel to remove the waste, just like a regular dovetail.

Since everything HAD to be hand cut, I laid out the rough measurements of the splines, trimmed with my chisel to fit, and sawed into individual splines. 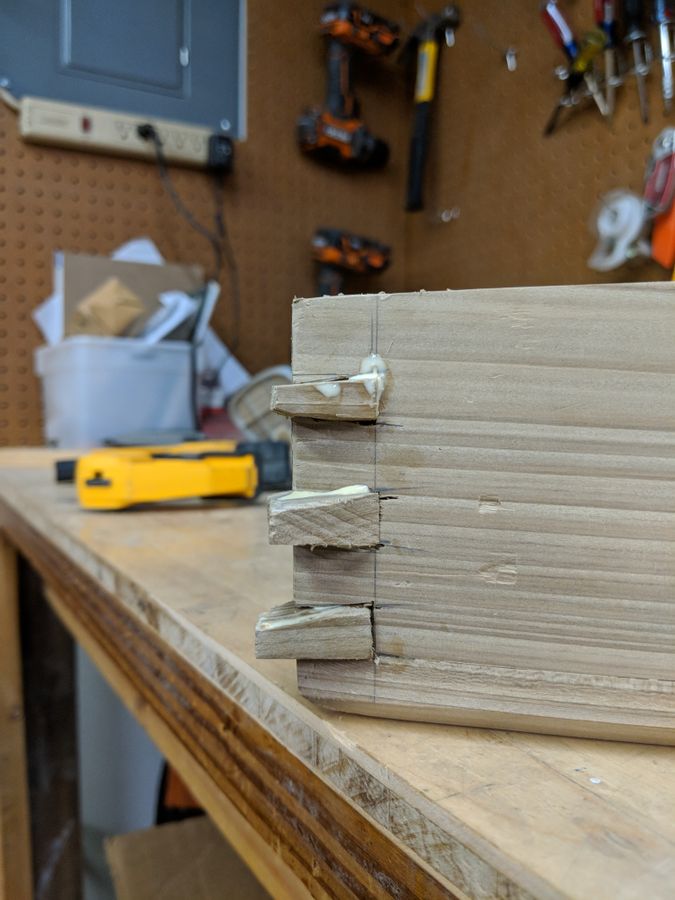 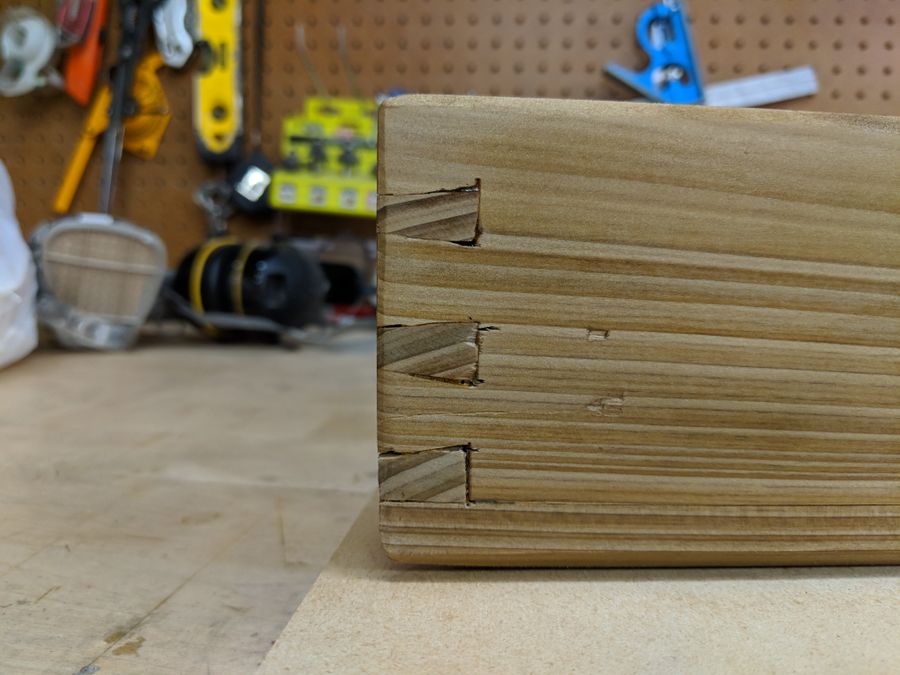 Used a flush cut saw to trim the splines.  you can see where the splines and the tails splintered quite a bit. 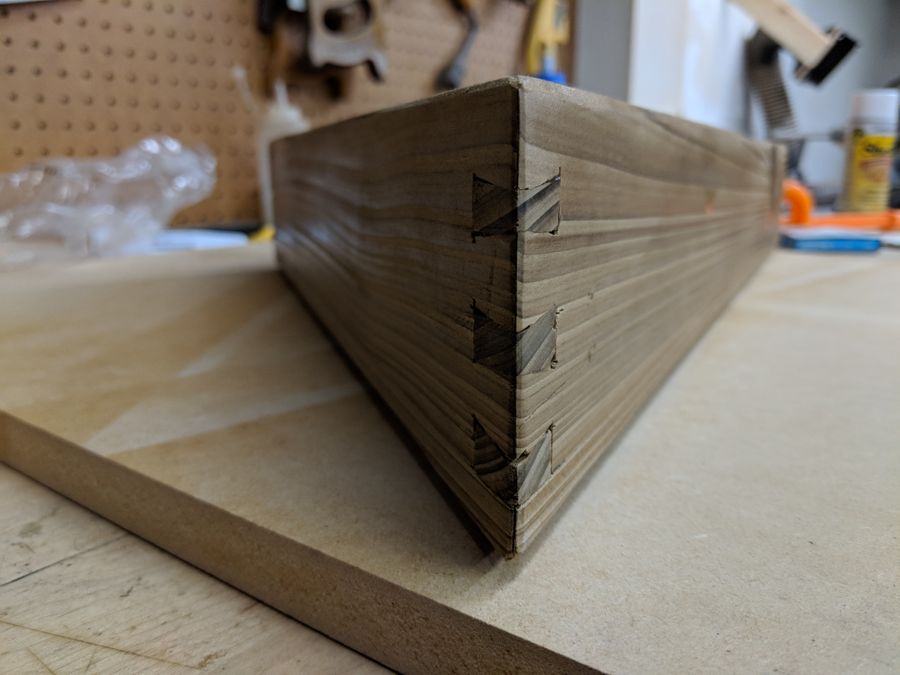 Glory shot of the splines 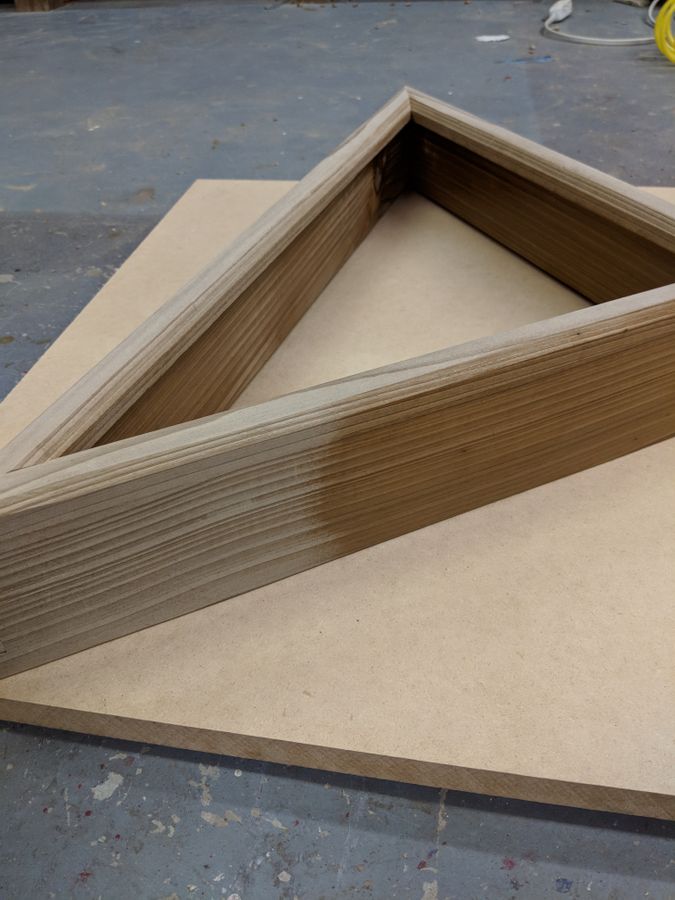 I decided to coat with shellac since durability isn't really an issue.  I really liked the way the shellac brought out the color in the wood too. 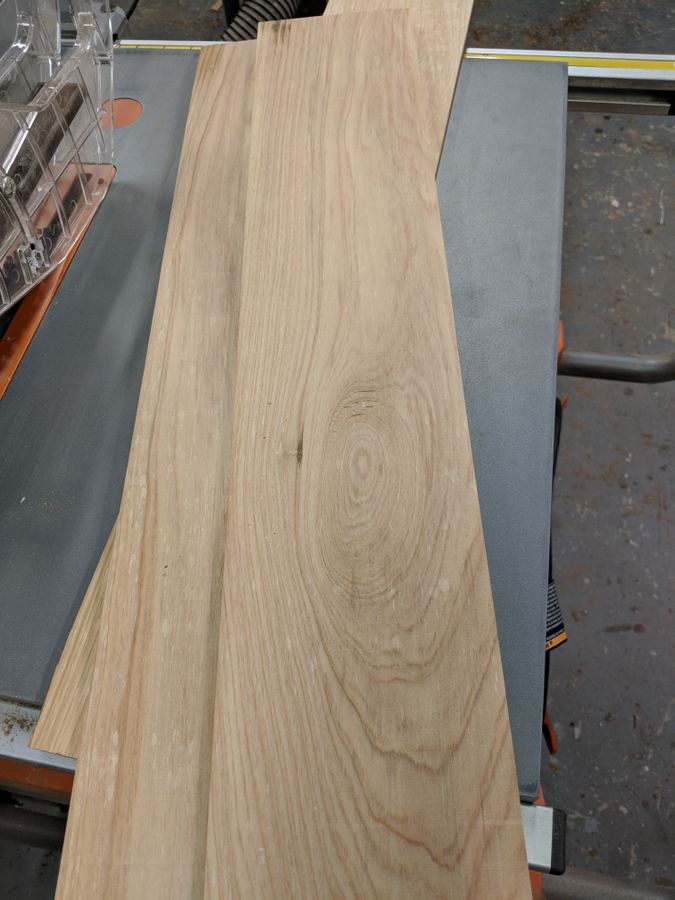 I had another piece of thinner cypress, also from our land, that I planed down to about 1/4 inch thick.  Three panels, edge glued and then trimmed to make the back panel.  Not pictured: I cut a sheet of Lexan glass to fit the inside of the case as well.  The glass shops near me either 1) wouldn't make a triangle cut or 2) wanted $80 to do it.  $20 sheet of Lexan to the rescue. 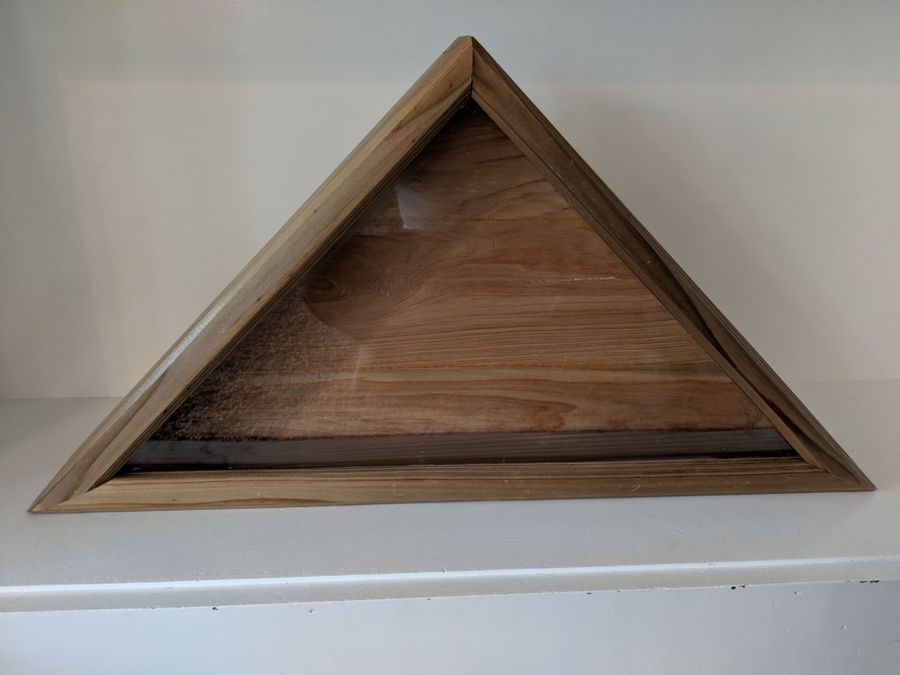 The finished product.  Well, almost finished.  But I want to leave the final step of filling the case with my grandfather's flag as a private means of remembrance for my family.