As my daughter has grown, I am finding myself putting out more kid projects.  The goal for this one was to build a Montessori style child's kitchen but not lose the space for plants.  The kitchen replaced a liquor cabinet that also served as a plant stand.  The liquor found a new home but we did not want to sacrifice the window space for the plants.  I built this out of 2x4s and sized it to fit the space and window.  It is anchored to the wall so as to prevent any accidents.

This is not a toy kitchen as it is intended to have functional items to teach them how to become self reliant.  In our case it holds some drinking water so she can help herself, her snacks and her dishes and cutlery.  There is a little "sink" where she can clean, or just splash around.  Combined with the little chair and table it gives her a place to be independent.

I learned a few things through this process but the most important lesson was not to build with 2x4s.  I thought I'd save a little money on materials considering this is a project that has a very limited lifespan. I ended up spending more time and being more frustrated and It was not worth the little bit of money I saved on materials. Lesson learned. 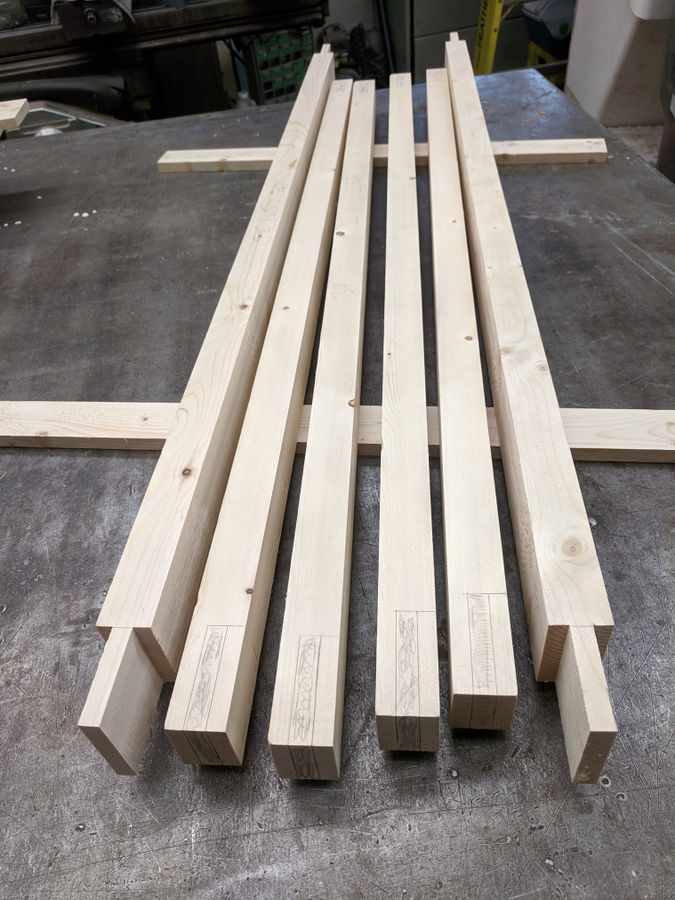 2x4s were cleaned up and joinery laid out for the plant stand.  Simple bridle joints to keep it together. 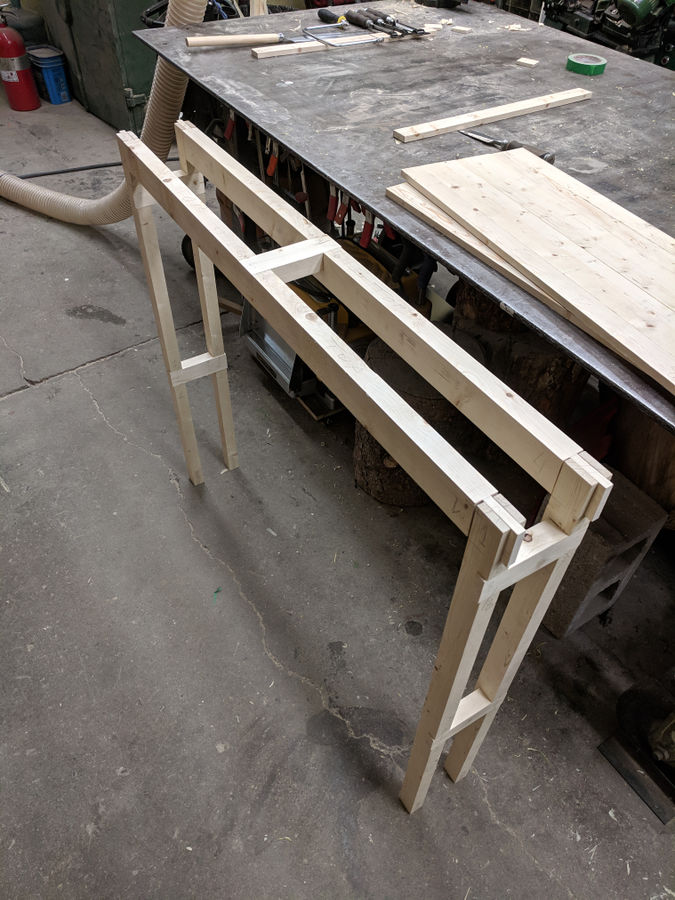 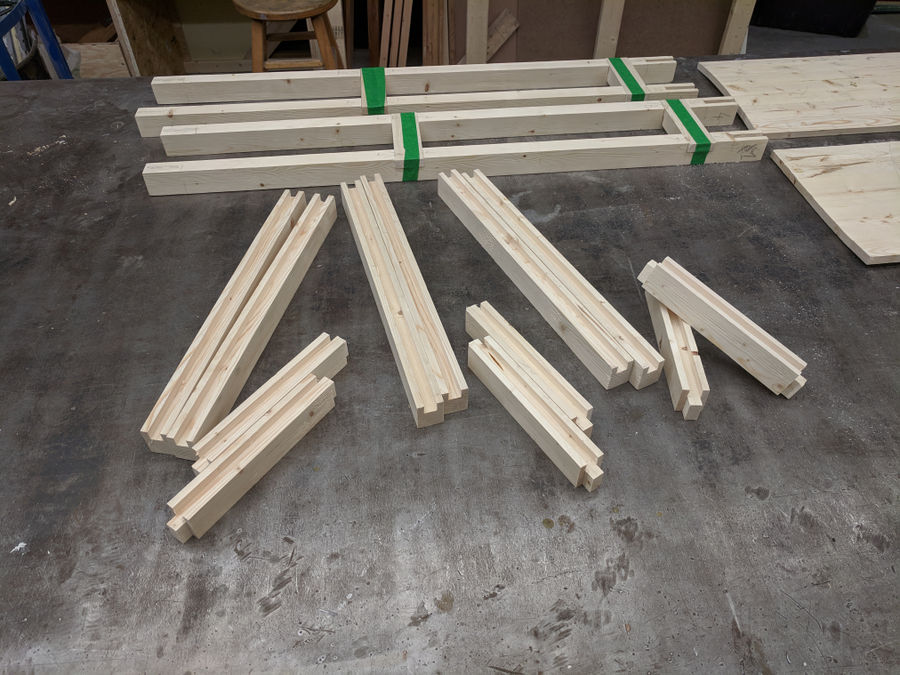 Preparing for some frame and panel sides. 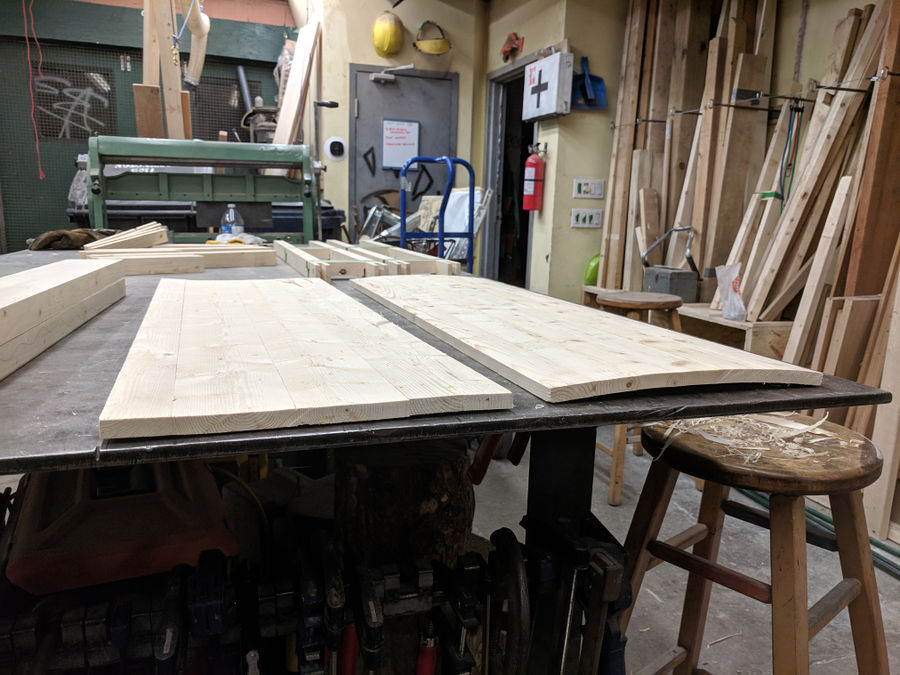 Oh,no! These were flat when they came out of the clamps. Resawn 2x4 used to make up the panels warped like mad overnight.  I had left the lumber in the shop for a week or so before I started hoping it would dry out enough...Definitely not dry... 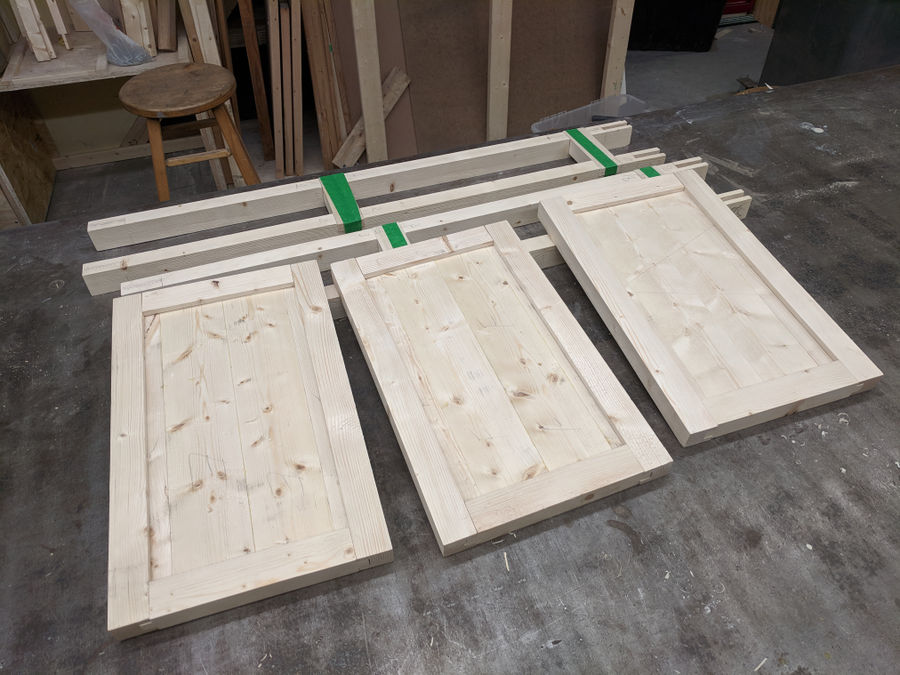 Managed to force the panels into the frames.  Luckily the frames were thick enough and the groove sized right to keep the panel flat.  About 9 months later, still no issue.  Think I'm in the clear. 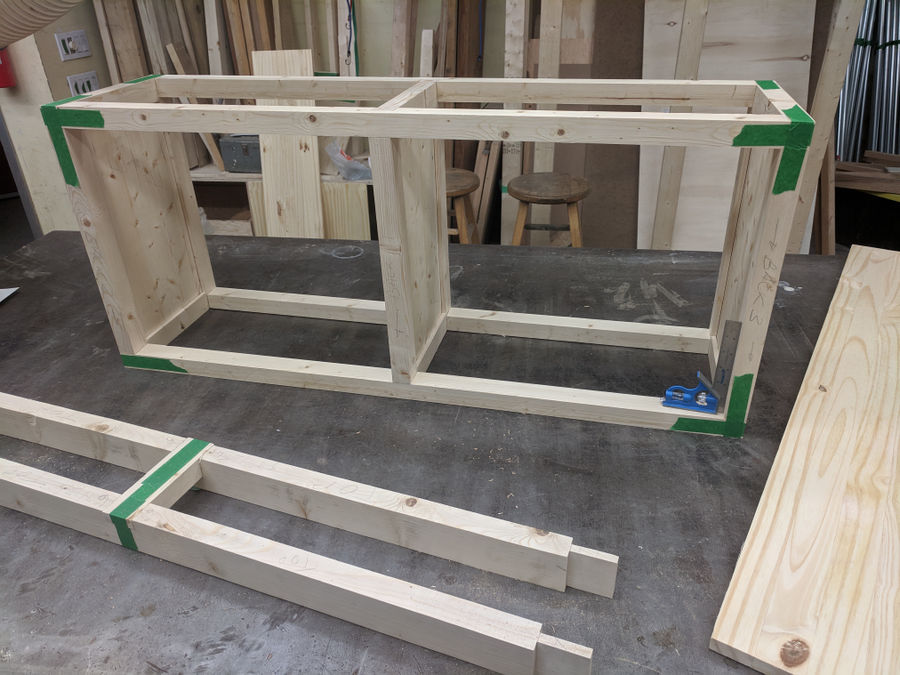 Dry fit the carcase (does this count as one).  The self squaring joinery worked out pretty well and things had not shifted too much. 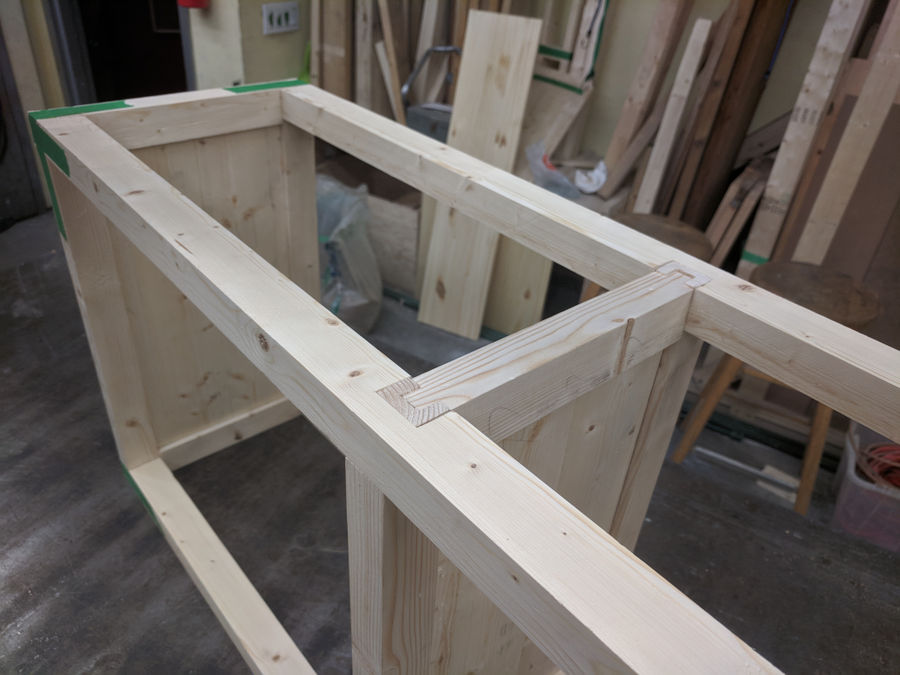 Half laps holding it all together. 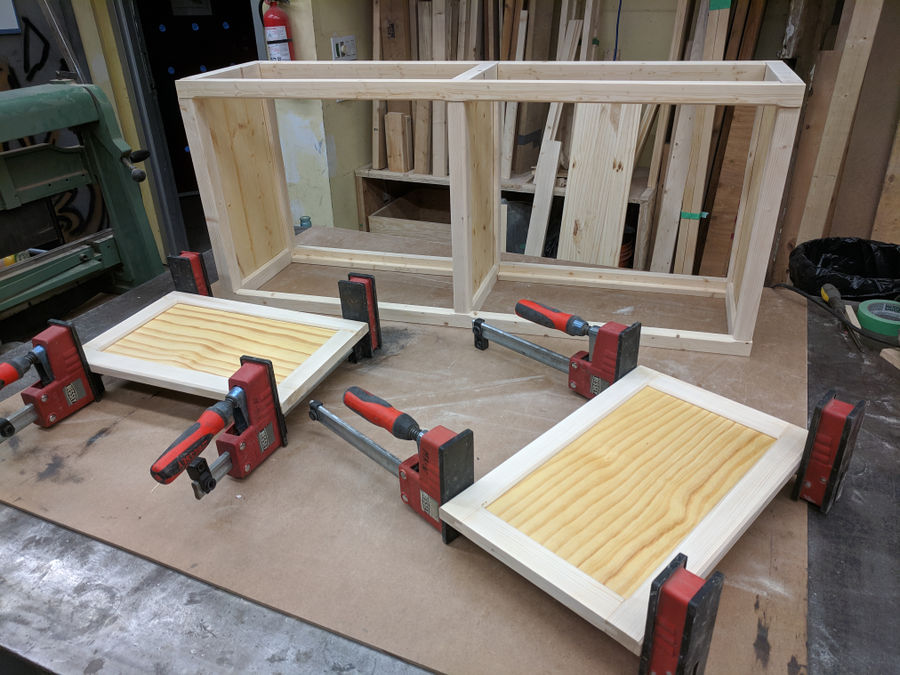 Doors are done.  I picked through the 2x4 stacks for the best pieces I could find.  I picked out the one with the straightest grain and cut it down to get "stable" stock for these doors.  They are still flat. 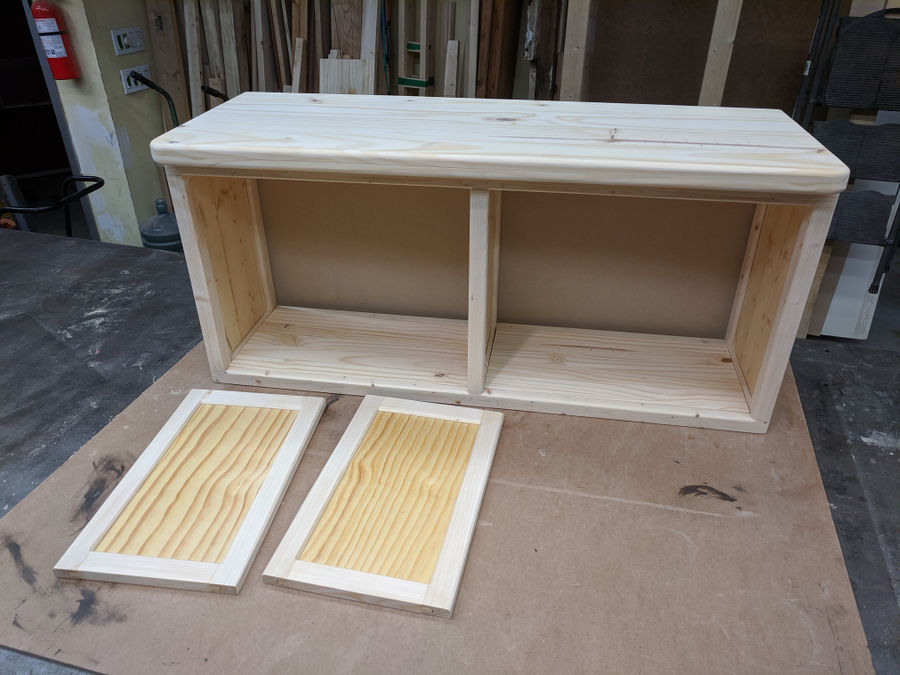 Coming together with a backer and a top. 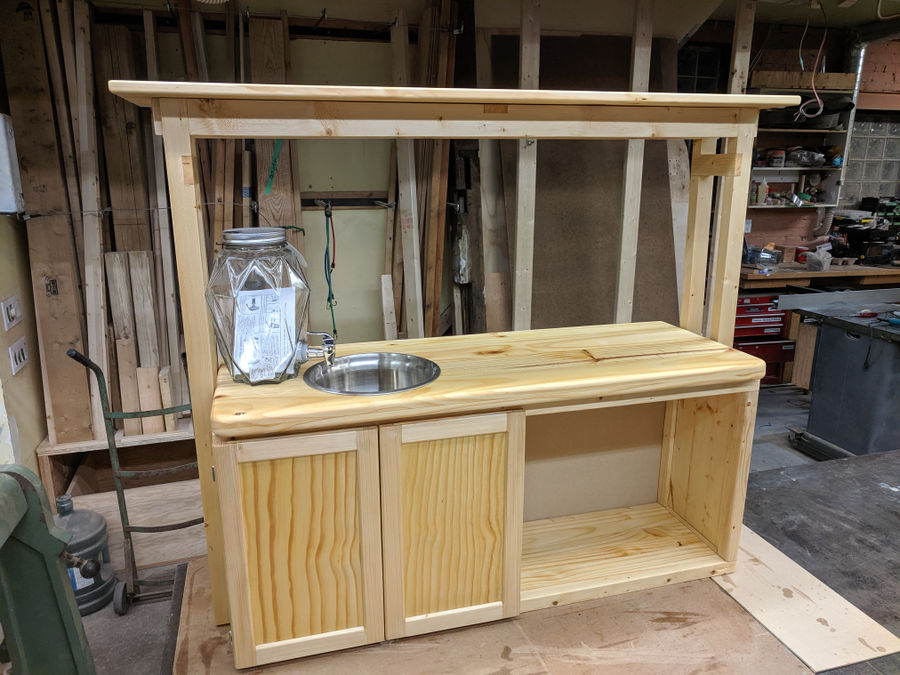 All done!  A hole accepts the bowl which acts as a sink.  The plant stand fits around the counter and I put in a couple of screws at the bottom of the legs to secure it to the frame.  This way it cannot slide out but can be separated. 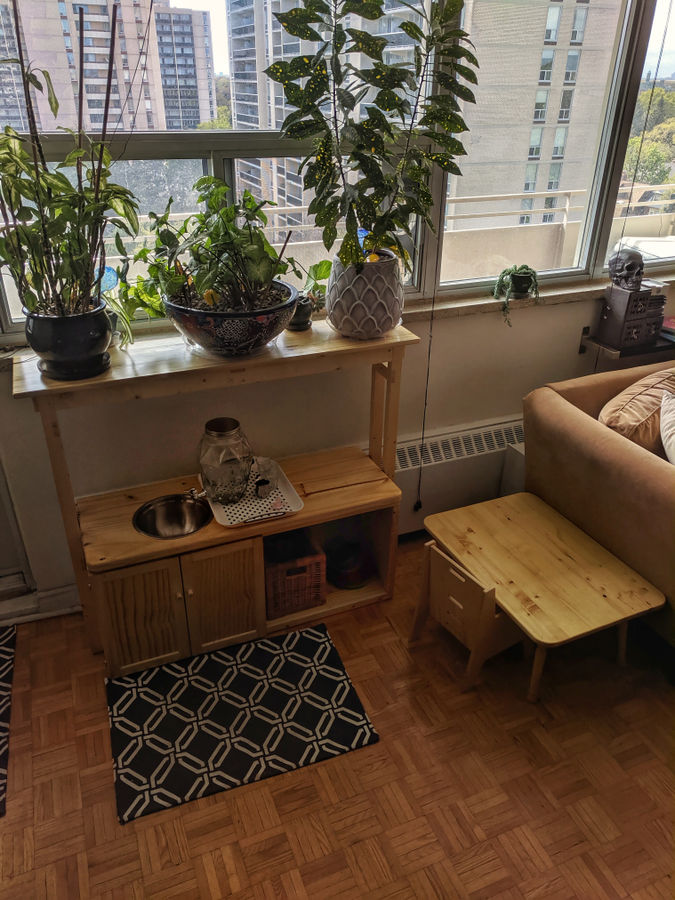 Finished with BLO and wipe on poly for the counter top..  The plants fit and get plenty of sun.  The stand is anchored to the wall to prevent tipping. 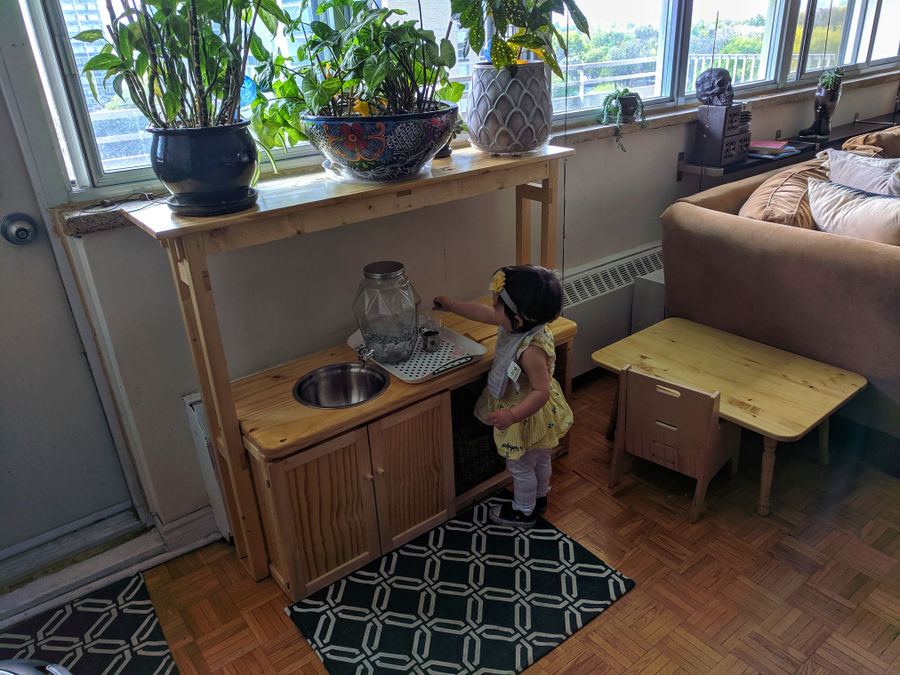 In use by the little gal.  A little tall so she can grow into it a bit. 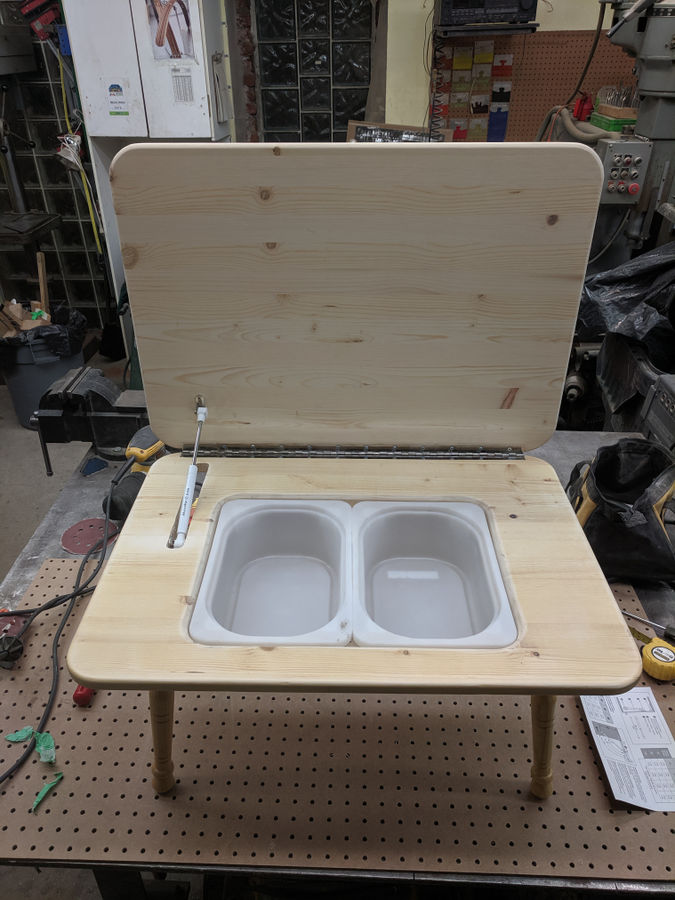 Just a quick shot of the table.  It acts as a little table for her but also as an activity table when the top is opened.  The bins get filled with stuff for sensory play (aka "baby mess making")

Very nice!  The sensory table is a great idea!

It's amazing how much 2x4's will warp overnight.