Box 11 - A Challenge To Replicate A Mek Woodworks Box

Following a Reddit thread, I decided to make a box using Mek woodworks 52 boxes for inspiration. I mostly have tools for turning boxes so I chose box 11. 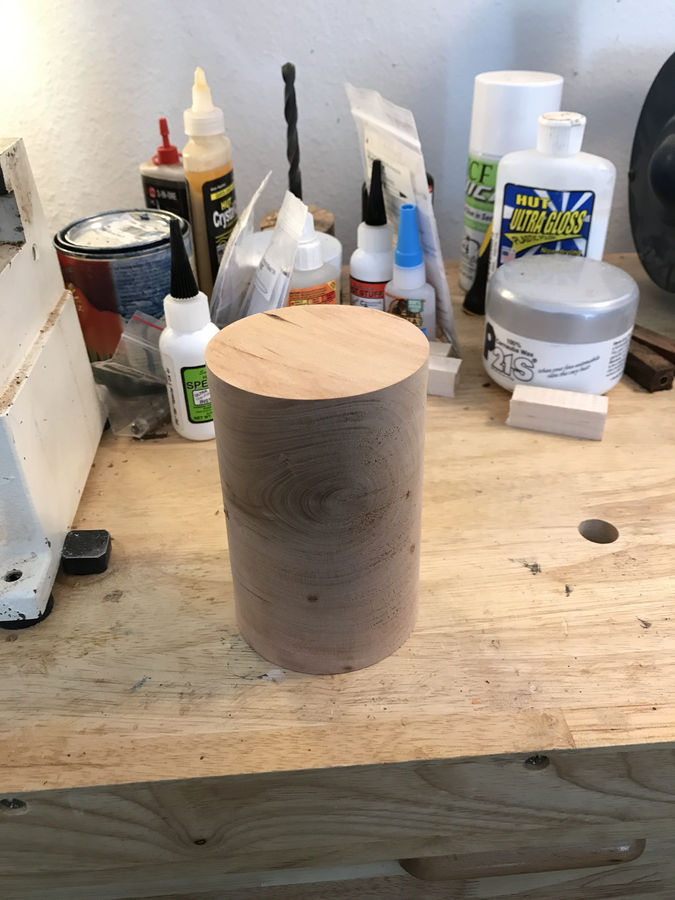 I started with a piece of donated cherry. A guy named Tom Carrol, who used to pitch in the majors, gave me some of his fallen tree a few years back. Here it is after I managed to get it on the lathe using a combination of mitre and hand saws. Roughed it out to a cylinder. 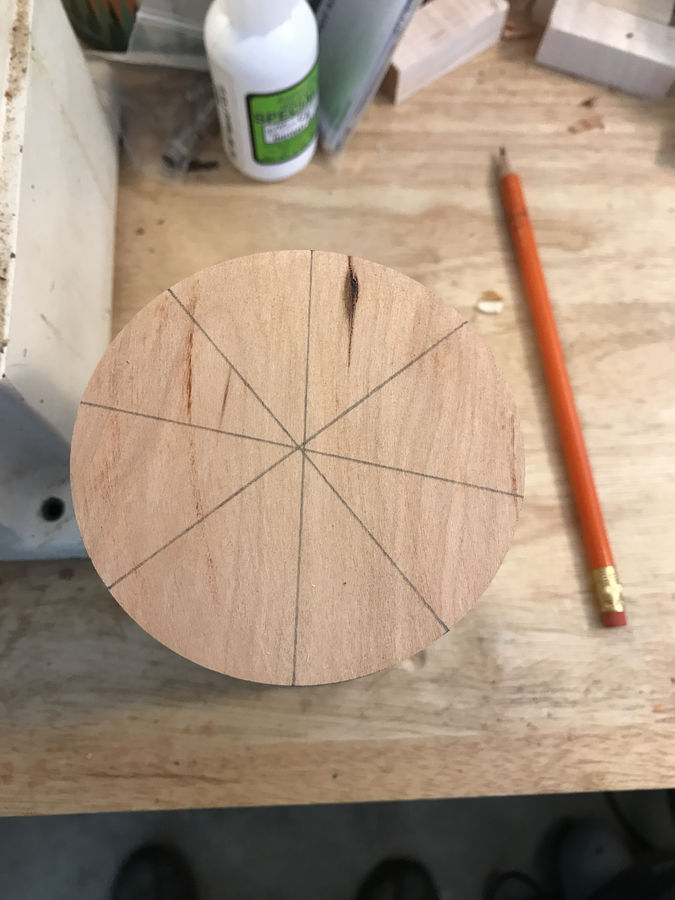 Finding center to go back on the lathe. 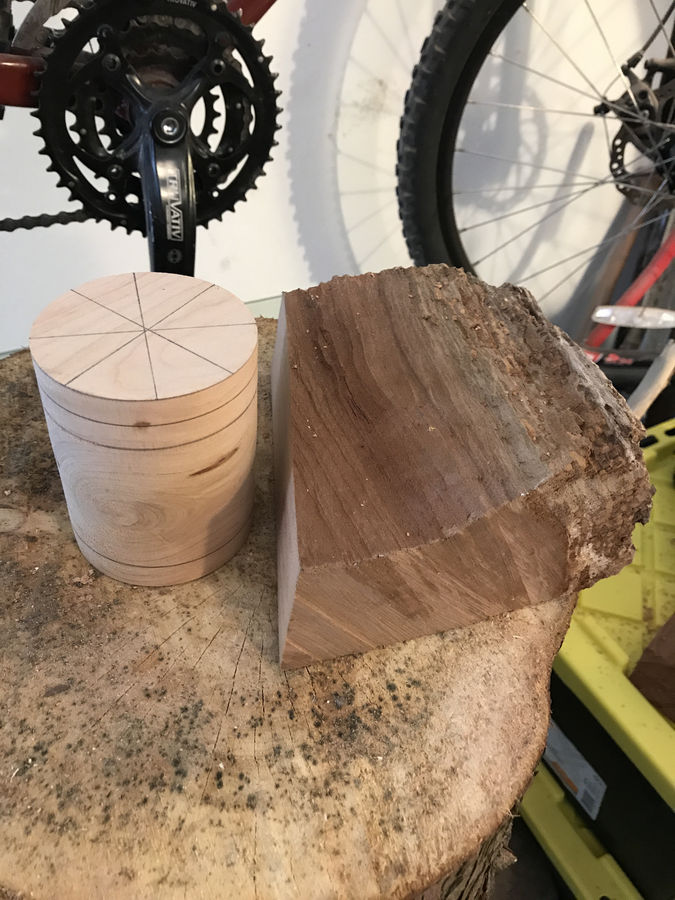 I didn't take a picture of the starting piece but it is the cylinder side by side with a very similar chunk to what I started with. Noticed I'd started marking for dimensions. I wanted to get as close to the same proportion as I could. 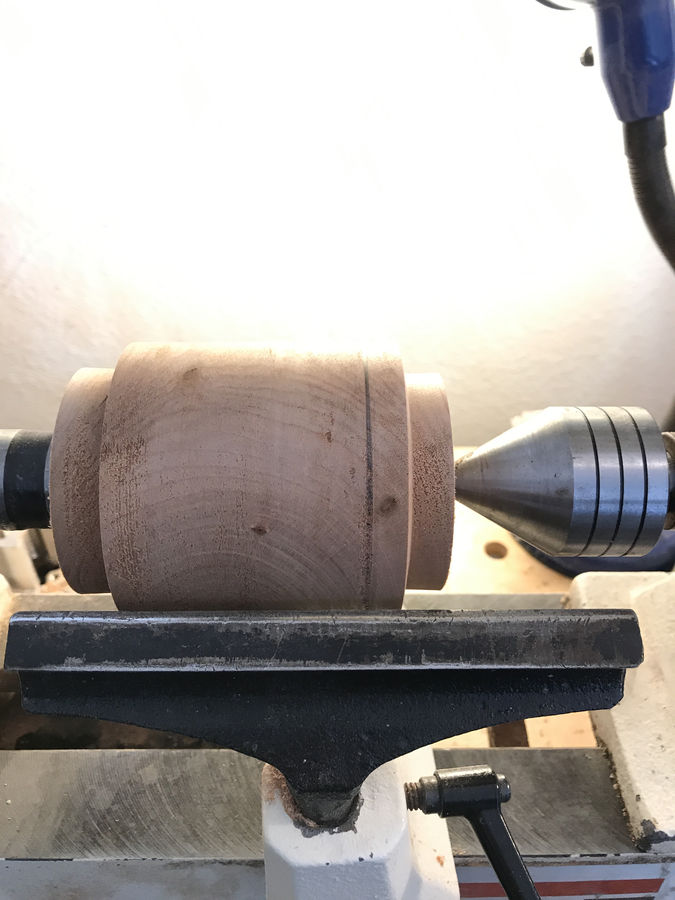 Making the tenons. I wasn't sure of the exact size of the box 11 I was using as a reference. I knew it contained a ring but not exact sizes. So I decided that 2.5" box height would look nice and be functional for more than a ring. I needed about 3/4" for the lid so it would be lifted slightly off the box in the finished product. 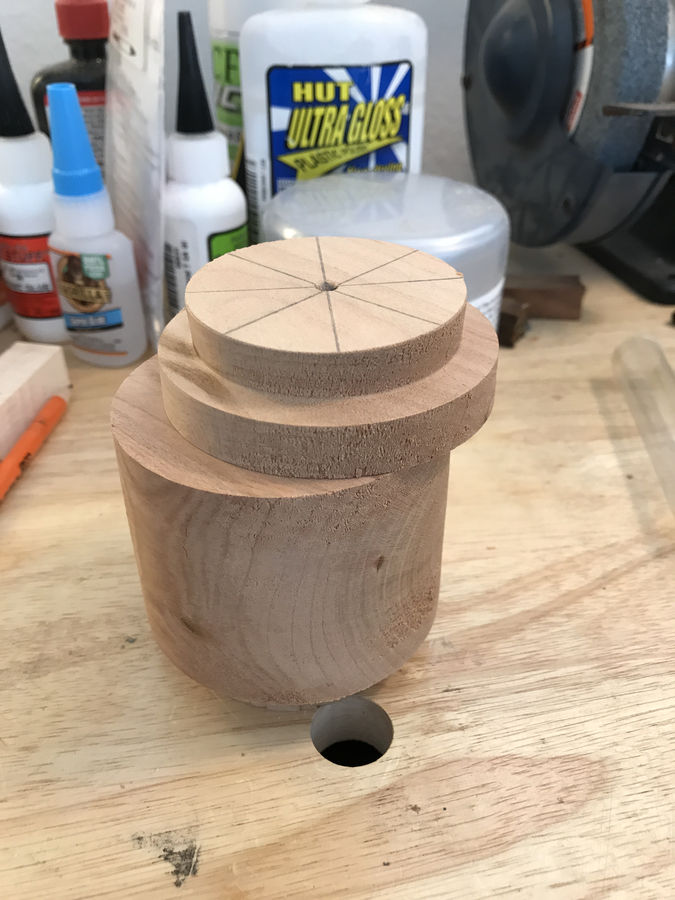 Used a mitre saw to cut the lid off. 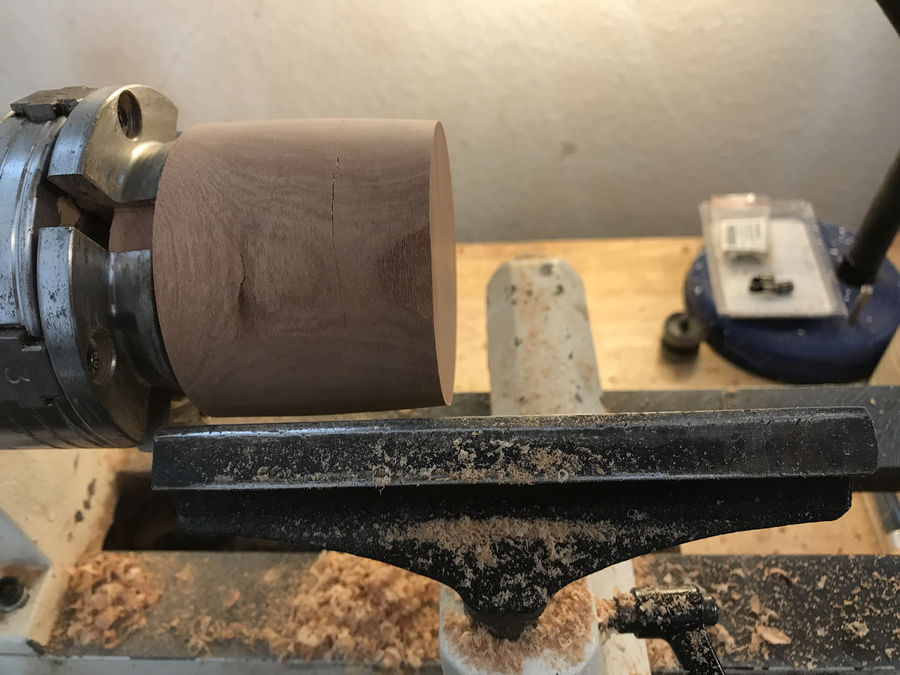 Notice a crack! More of those were coming the more I turned. That's ok, I had an idea to fill with metal powder. Brass would look nice with the finished cherry and add some character. A crack healed to be even more solid.

Also, here is where I was working on the lean angle. I read the blog for box 11 and it mentioned the angle was important. At first I had too much and it didn't look straight when standing so I modified this to have a more subtle angle and appearance of a straight vertical box with the lid on. 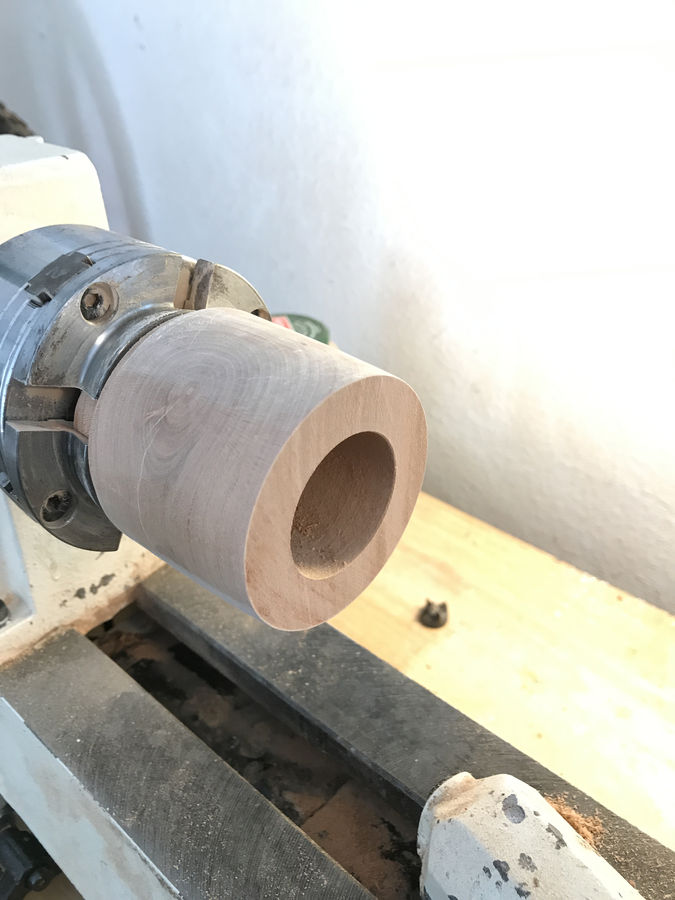 Used a drill to get the hollowing started then moved to a carbide square bit, and finally a scraper. 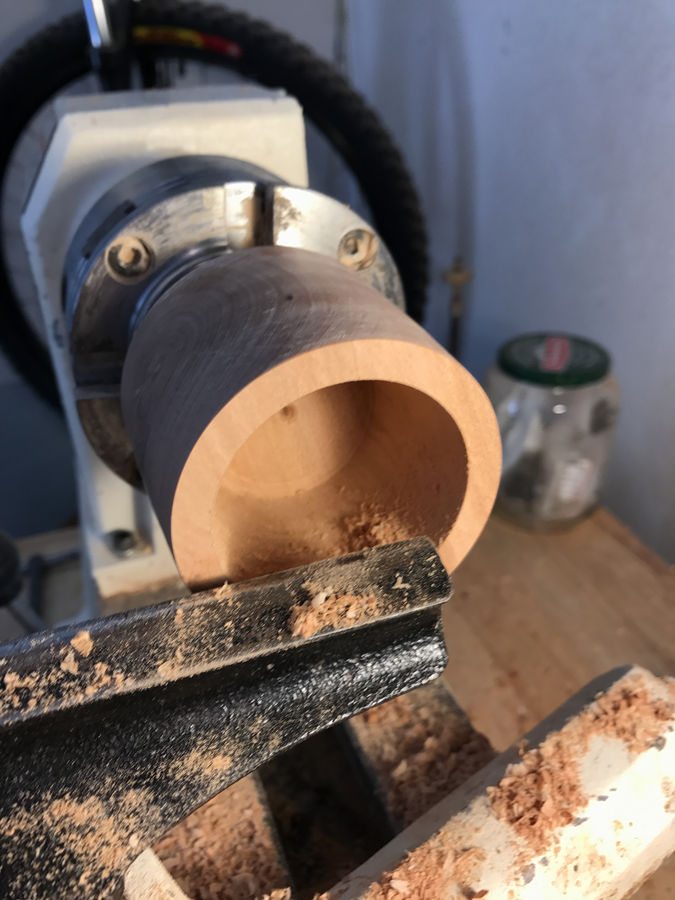 More work on the interior. 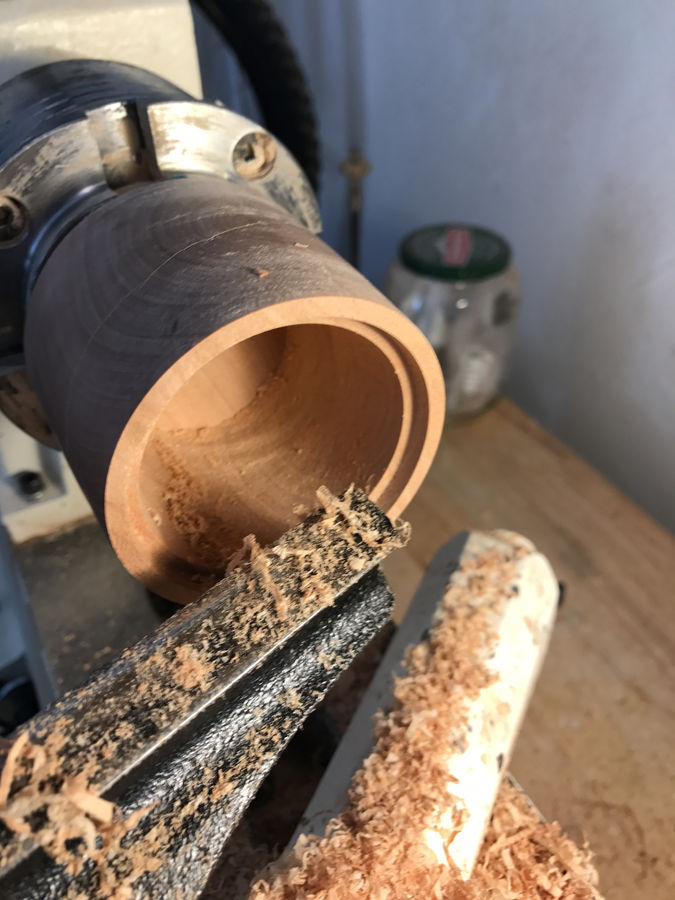 I had to be careful and very patient. Wanted the box thickness and the lip for the lid to be the correct sizes. The lid is supposed to sit higher than the box by about a 1/4" for me. 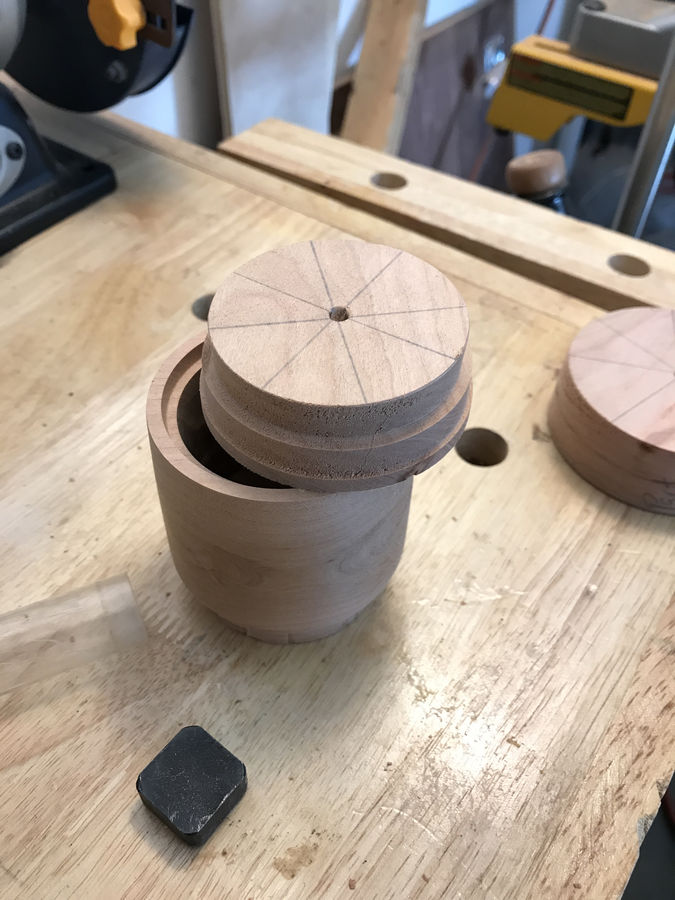 All done with the bottom part of the box now need to work on the lid. 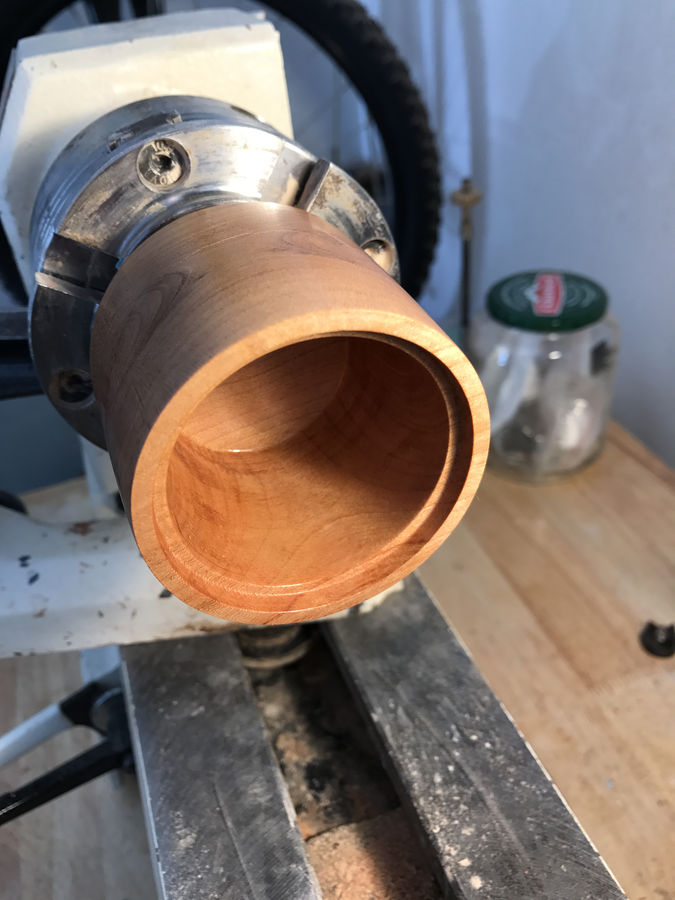 Couldn't find a good lid picture so let's skip ahead to finishing the bottom. I used a couple of coats of Danish oil to get a nice look. 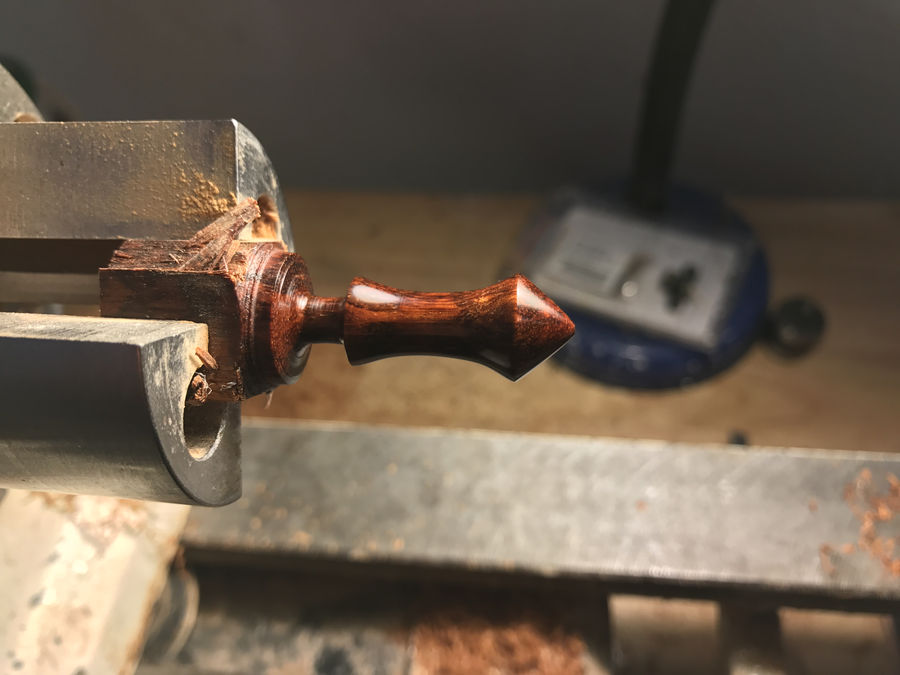 But I still needed a finial. The original had a darker brown wood but I wasn't sure what it was. Maybe cocobolo? I had some left over small pieces of snakewood that would be awesome! That's what I went with. Here it is turned to the right finial size and shape for my fingers. I sanded up to about 1500 grit, the used a friction polish. Snakewood finishes so well but have to be careful of too much heat. It cracks mercilessly. 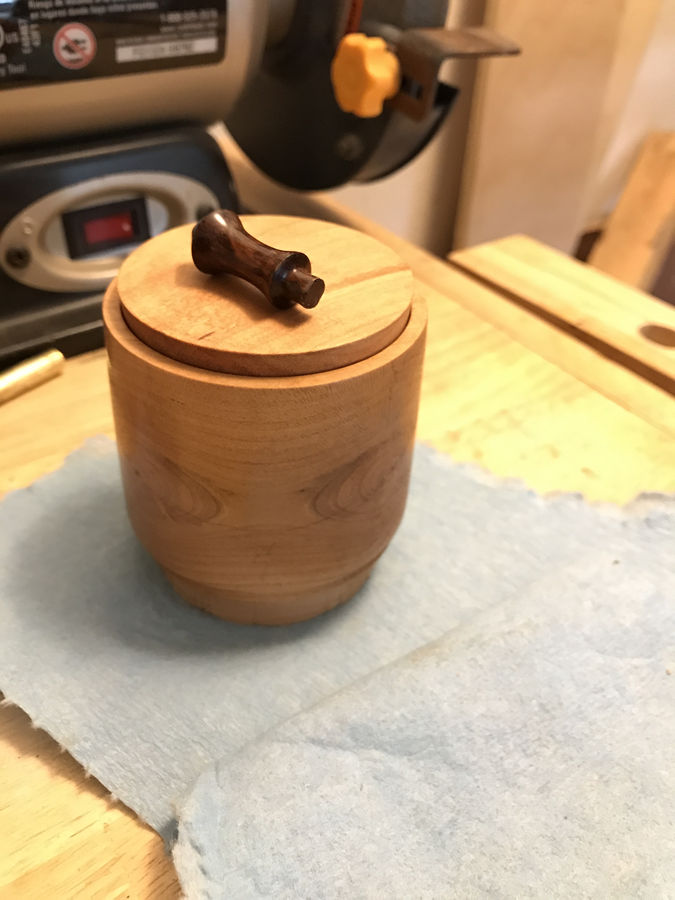 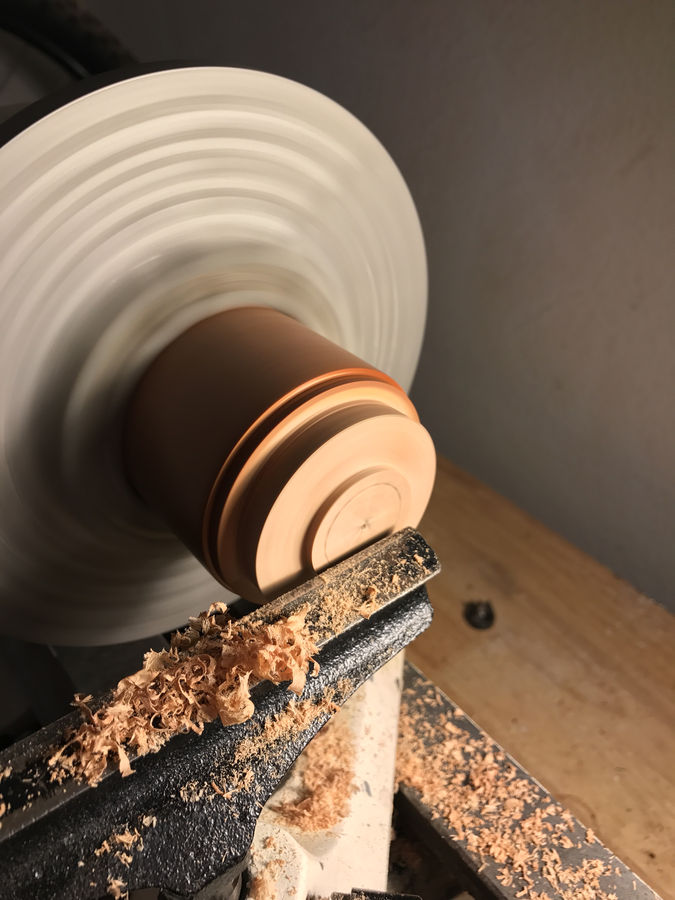 Except I have to take that tenon off the bottom still. Nerve wracking at this point, I've come a long way. Luckily no mishaps. 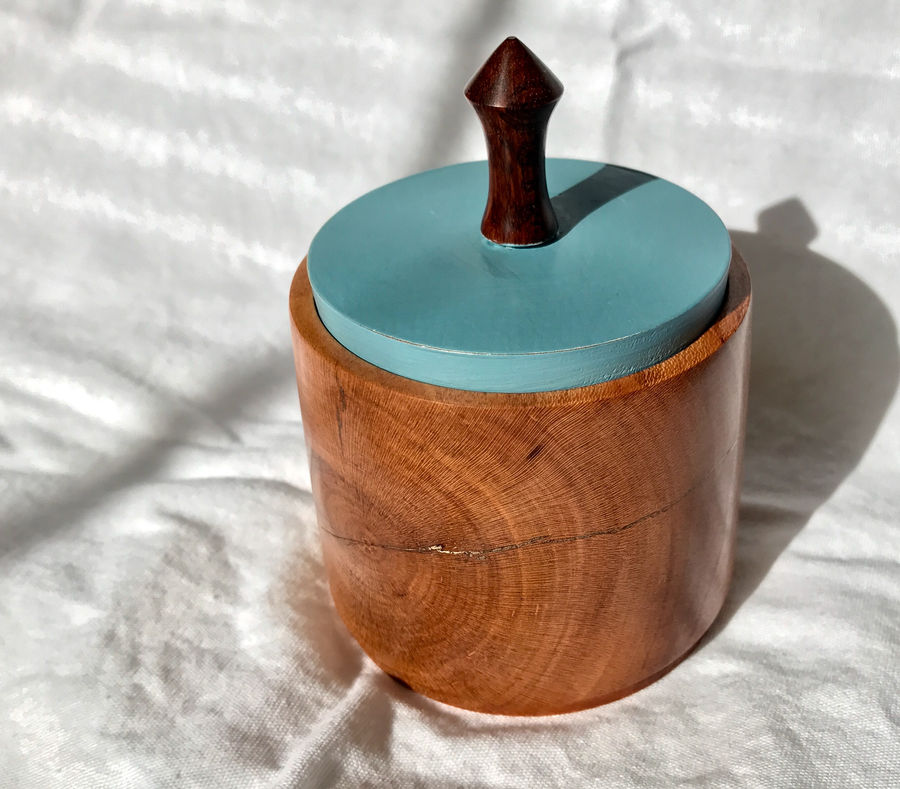 Voila! The final box. I painted with general Finishes milk paint, white base layer and blue halcyon on top. Sanded with 0000 grit steel wool to give it more of a weathered appearance. You can also see the brass inlay fill. To get that, I used brass powder in the cracks with thin CA glue. Filled a few times and sanded the CA. Repeat. When done the brass is shiny and the crack filled. 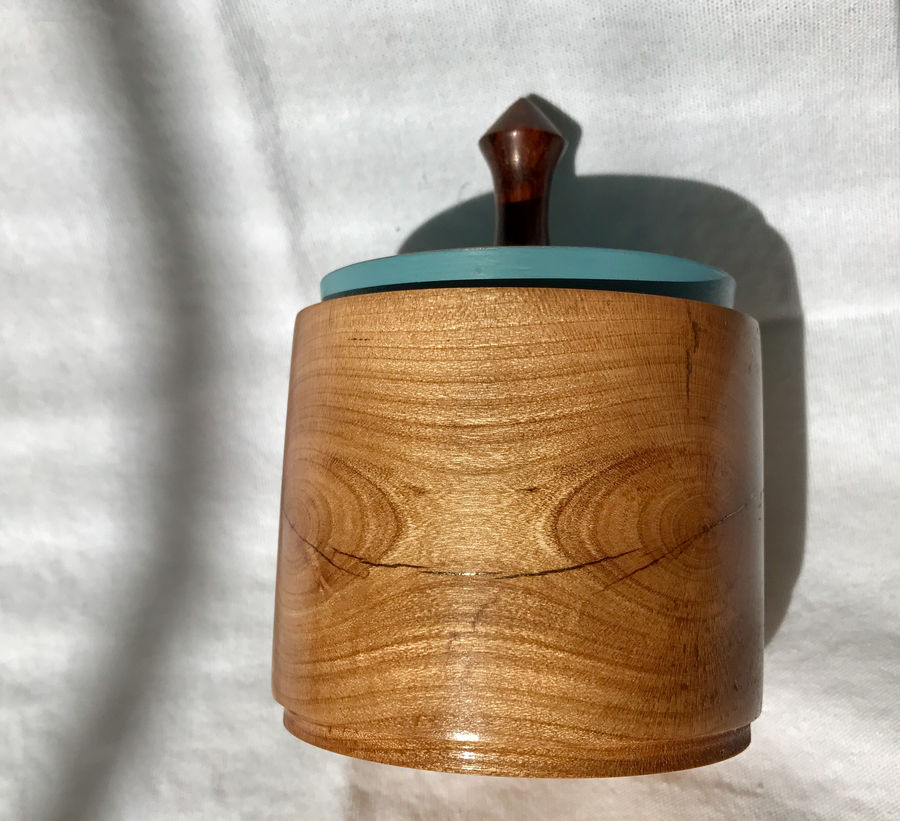 Another photo. You can see that crack from knot to knot, filled with brass. 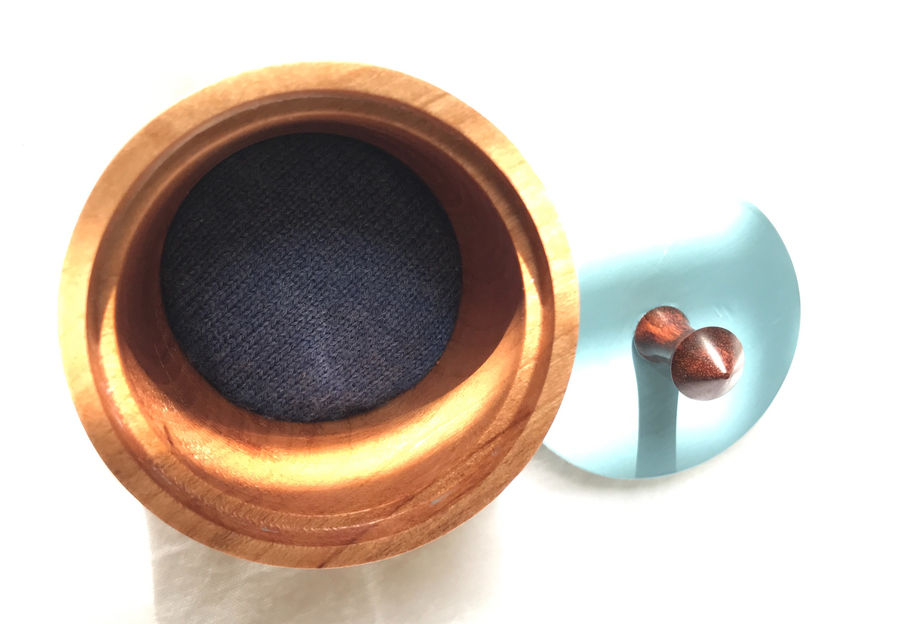 I needed a cushion for this box to stay true to the design. Found an old blue cashmere sweater that had a hole in it, and used thin cardboard and some cotton padding to make the cushion. Fit nicely. 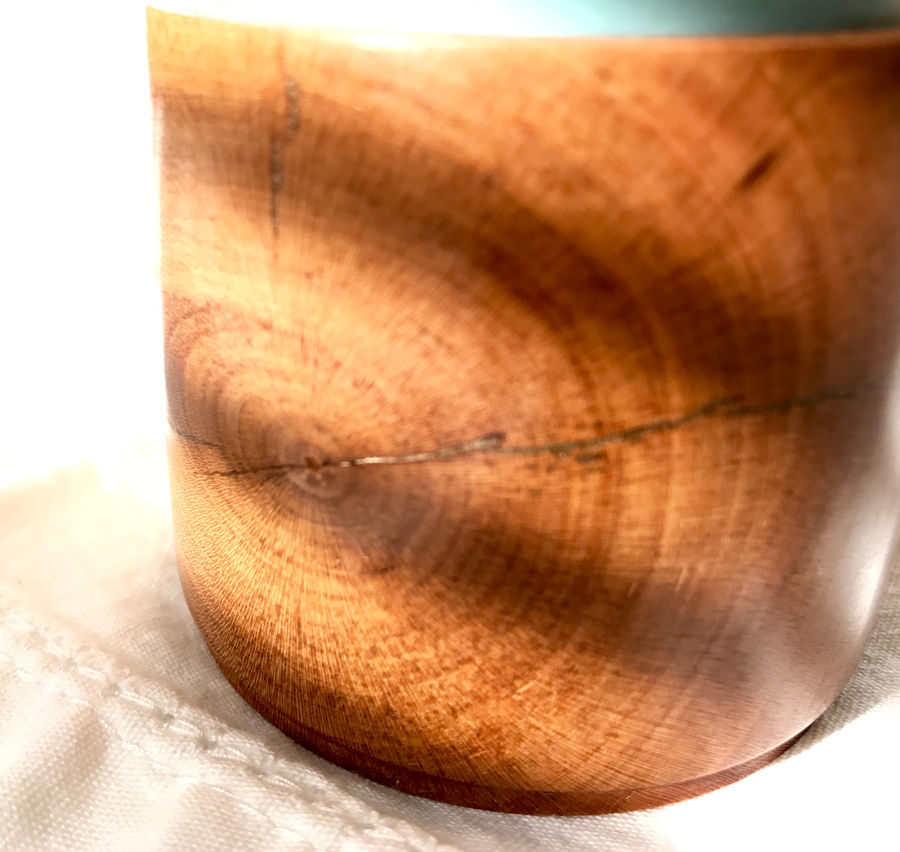 Another shot of the box. 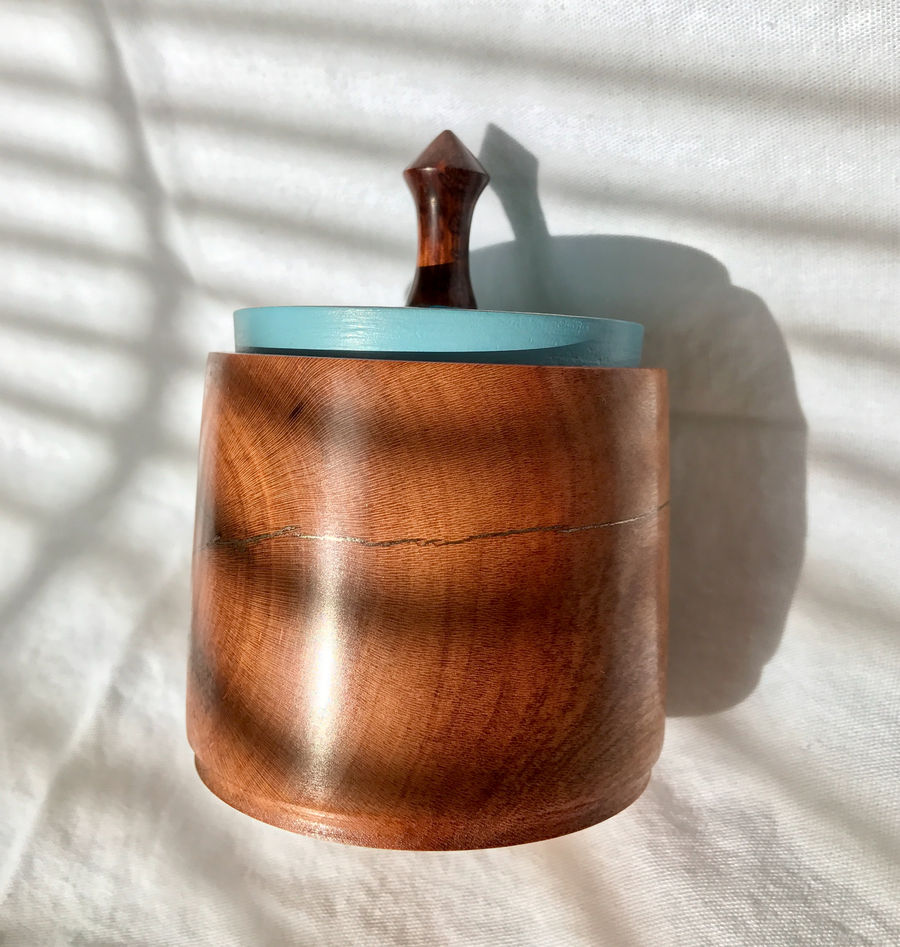 You can really see all the elements here. 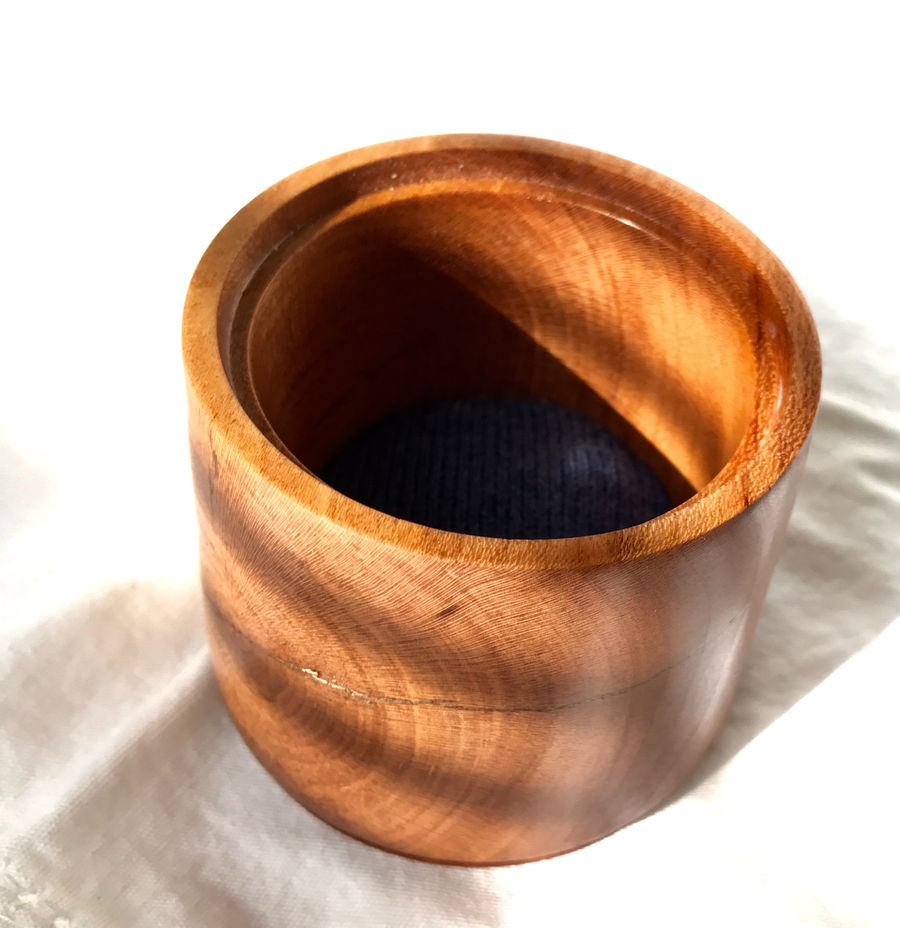 That is a beautiful box! I love the wood selection and the color of the paint. Thanks for sharing!

That is a beautiful box! I love the wood selection and the color of the paint. Thanks for sharing!