Sorry that there are no progress shots. I was trying to get them done as quickly as I could and just didn't document the build. I actually got to incorporate several aspects of my nerdery outside of woodworking into them. Along with the box making, I dabble in decorative knot tying, (aka man-weaving), collecting antique writing implements, (used to write the letters), and CNC. Thanks for checking it out! 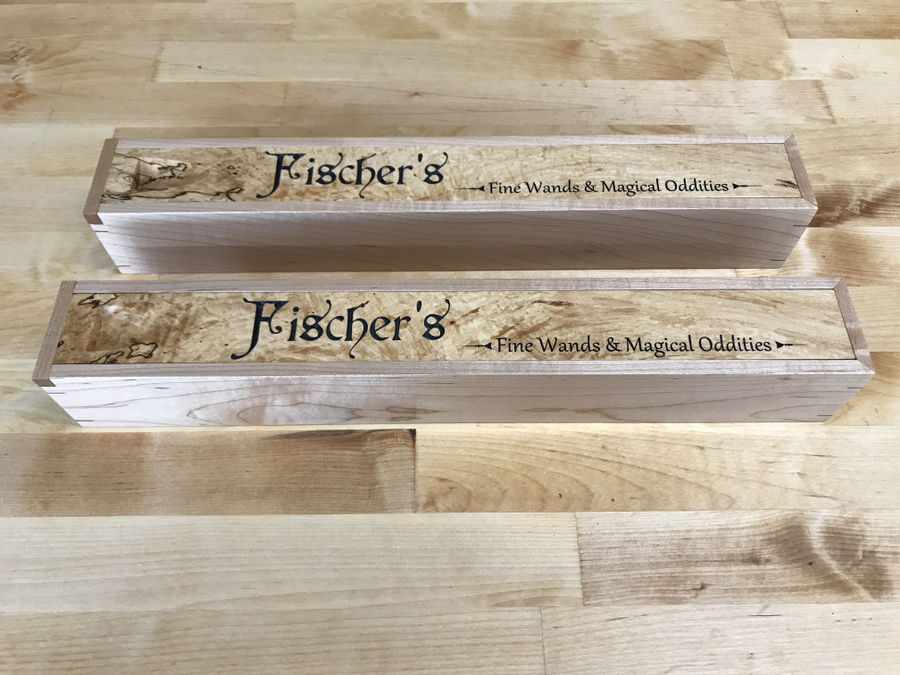 The boxes are simple pencil boxes with mitered corners and black veneer as splines. All the lettering and finger pull were done on the CNC (carved then painted in) but everything else was done the traditional way. The box is hard maple and the tops are spalted maple. I just had the material kicking around but I really like the way the two woods complement each other. 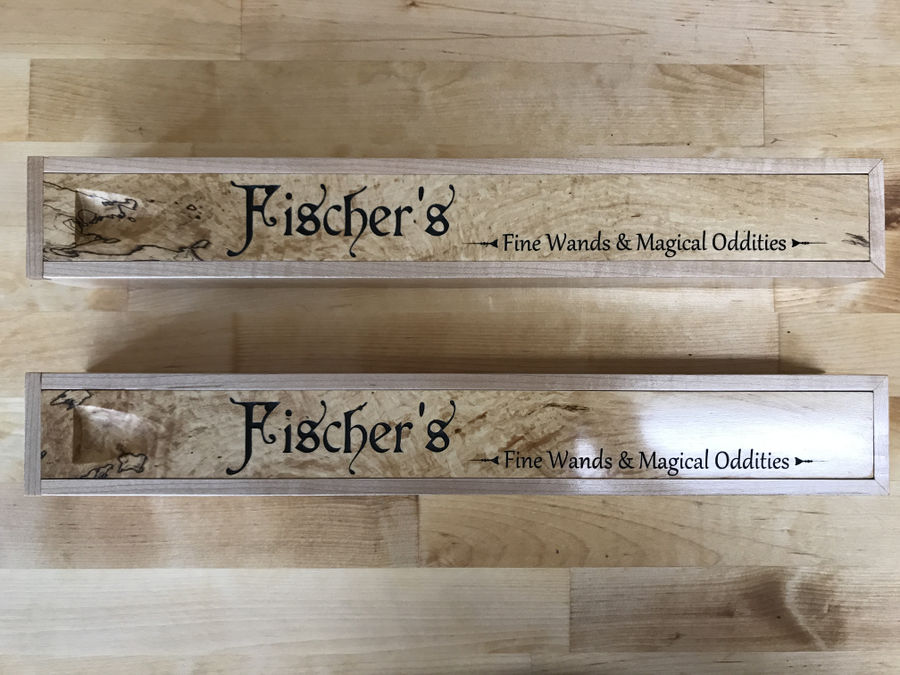 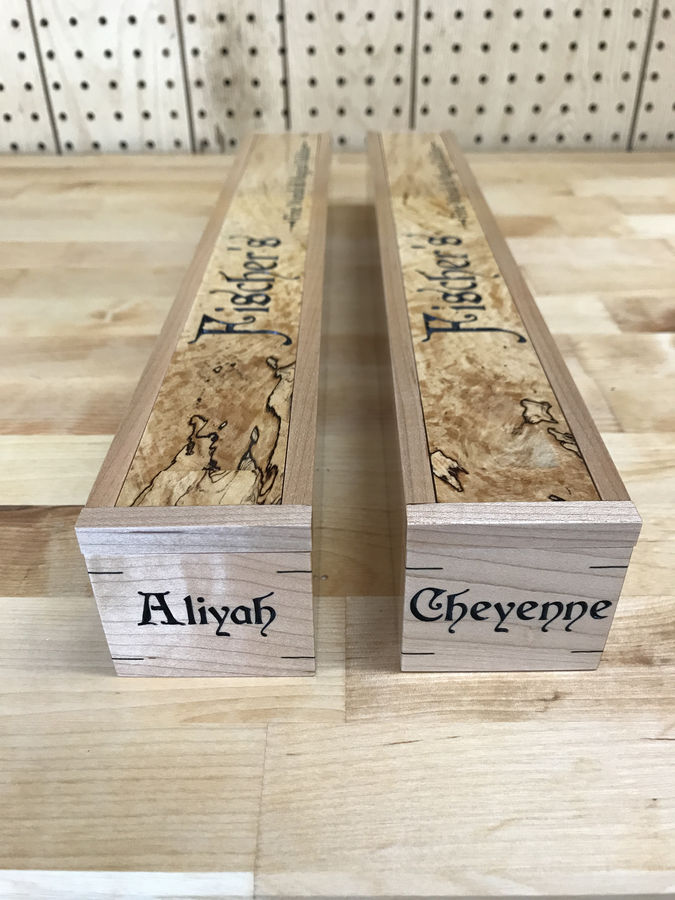 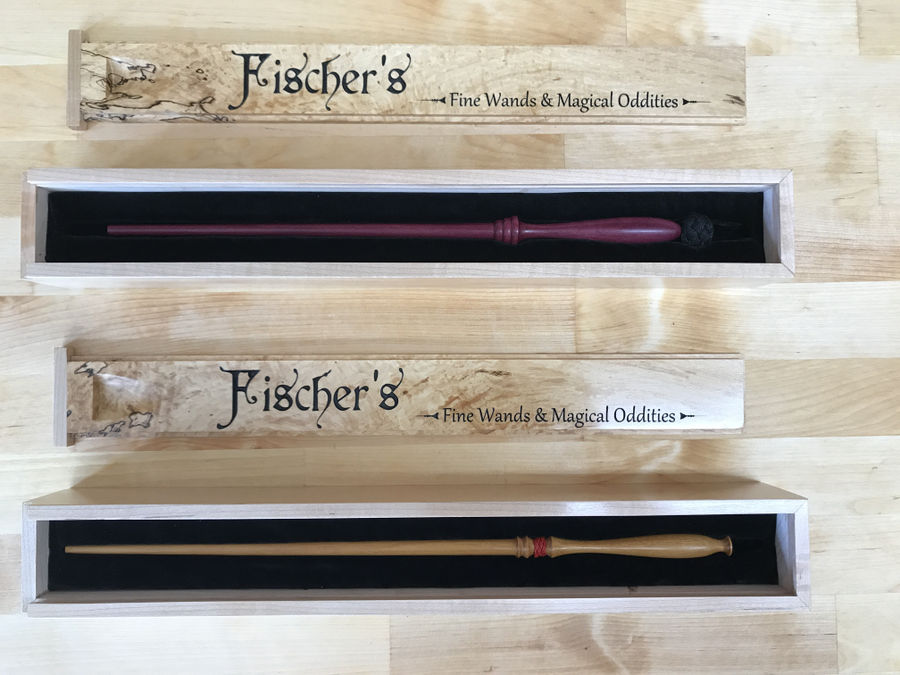 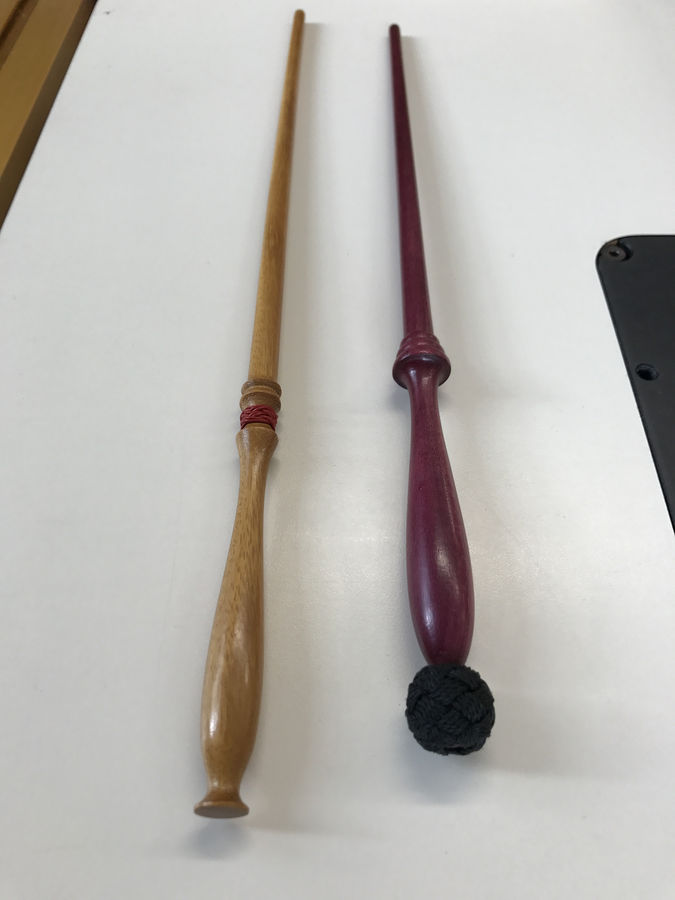 Both wands were cut on the CNC as well since my non-existent turning skills weren't getting me what I was picturing in my head. They were done as a 2-sided 3d toolpath. The Osage Orange wand picked up quite a bow after it was cut, hence the reference to it's "unique shape" in the letter you'll see further down. If you can't cover it up, make it a feature! 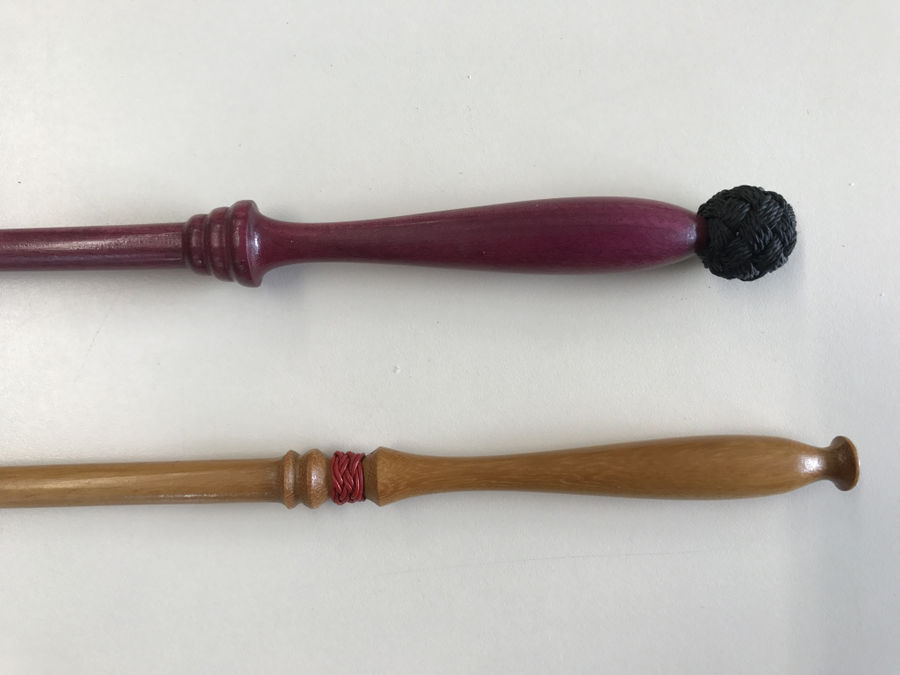 The knot on the Purpleheart wand took a few hours to tie and I'm really pleased with it. I love tying knots with that material, tarred nylon. They always come out looking pretty interesting. The knot on the Osage Orange wand is pretty simple and is done in dyed leather cord. 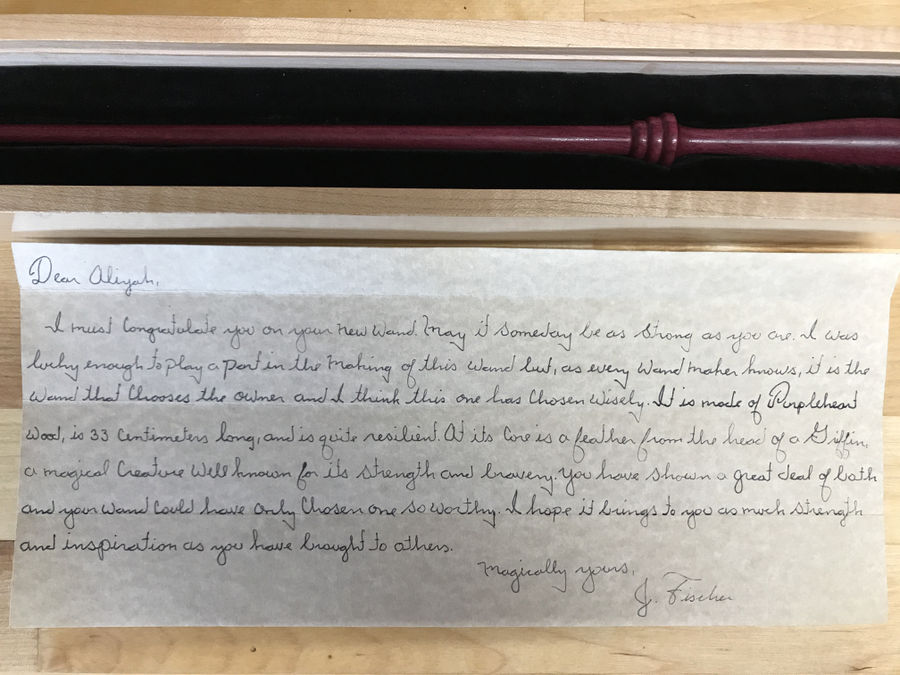 I got to break out some old Italian hand-blown glass pens and an inkwell for the letters. I figured I'd gone this far, why not really get into character? Since I couldn't be there to do the whole wand ceremony (that's really Ollivander's sort of thing anyway, and we all know what a drama queen he is) letters of introduction for the new wands were in order. 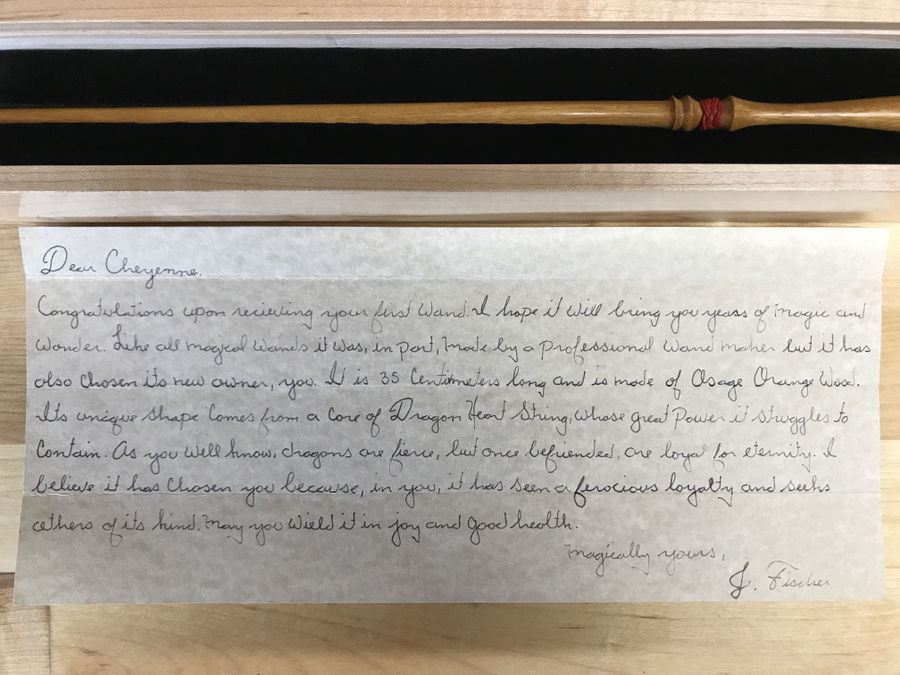 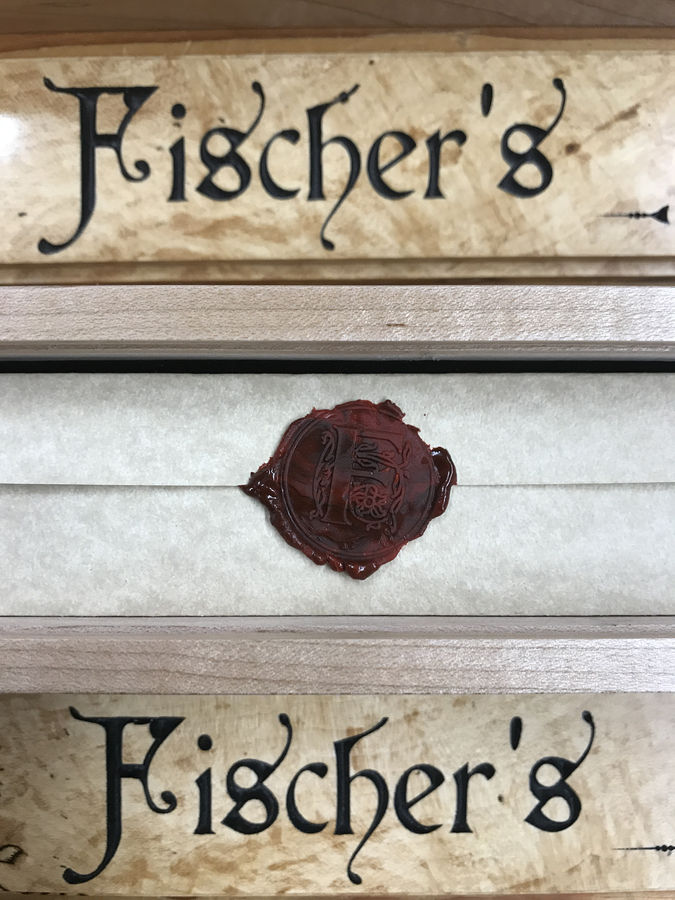 When you just happen to have a personalized wax seal stamp laying around. 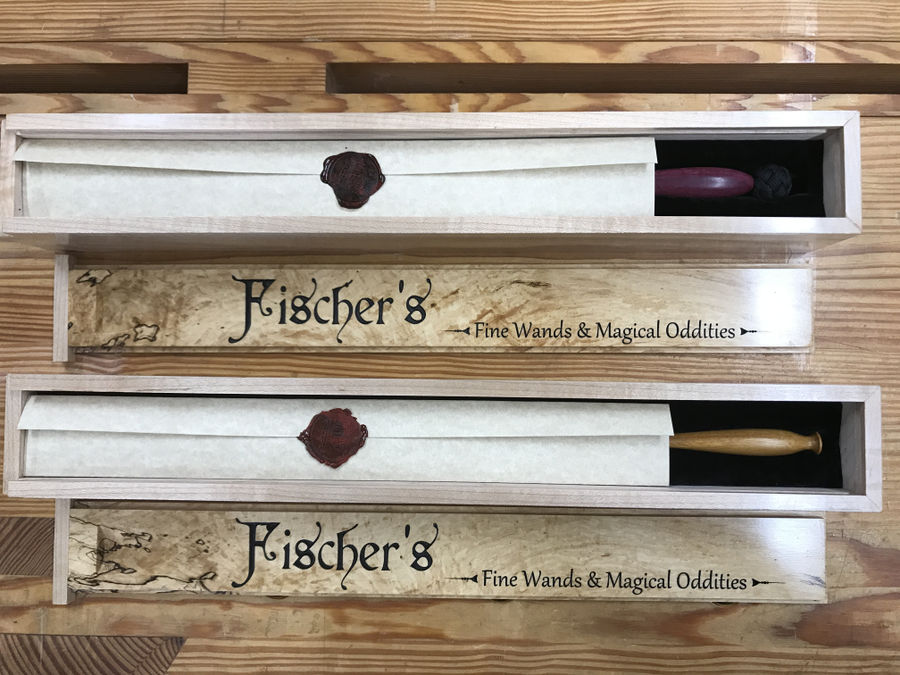 Ready for the trip to NZ!

Wow these are very cool! For your next wand, you should try to hollow one out a bit and make it separate and put a feather inside.

You said CNC cut can you explain the process more? Do you cut each side and then glue together?

Also do you make a wood stand/support for them in the boxes or do they just lay in the box on something like satin?

I've heard of people inserting actual cores into their wands like you said, for that extra "realism". I could see doing it with something that adds a little weight because they're very light and don't feel substantial enough.

On the CNC, I do what's called a 2-sided cut. The work piece starts off as a block of wood and the machine cuts away 99% of the material from the wand, but only around the wand. A substantial portion of the block is still left and there are a couple little "tabs" that keep the wand attached to the rest of the block. That way, when the wand is cut free, it doesn't go flying and/or get damaged by the cutter. It first cuts out the top half of the shape, cutting down to exactly half the thickness of the block. Then I flip the block over and it cuts the bottom side, going to exactly half the thickness of the block again and "meeting up" with the first cut. The shape is now completely carved out with just those tabs suspending it within the bigger block. I just cut those tabs with a fret saw and sand away the little bit that's left.

Unfortunately, it's hard to see in those pictures because it's so dark, but I took a spongy closed-cell foam block and cut a groove in it that the wand could nestle in. I used spray adhesive to "upholster" the foam with black velvet. They hold the wands really securely so they don't bump around in transit and has the added benefit of looking pretty snazzy too.