Cathedral, Game Of The Medieval City

This is a project that's been a long time coming, one of my bucket list builds in fact. This is my re-creation of the board game, Cathedral, Game Of The Medieval City. It's like a combination of Chess and Tetris. The object is to get all of your faction's buildings within the city walls and prevent your opponent from doing the same. The original game board was made of cheap pine blocks glued together and stained their respective colors and the board itself was printed MDF. I wanted to challenge myself to carve each piece from solid blocks of contrasting woods and to make a nice board that I could pass down to my family. Some pieces were easy to knock out on the table saw, others were a build puzzle all by themselves. There are 29 pieces in all and I probably made close to 45 until I got them all right. The original box and rules were lost years ago and I wanted whomever gets this in the future to have easy access to rules that couldn't be lost and were easily read. Unfortunately, almost all photos prior to starting the lid got lost in a computer upgrade. Hope you enjoy! 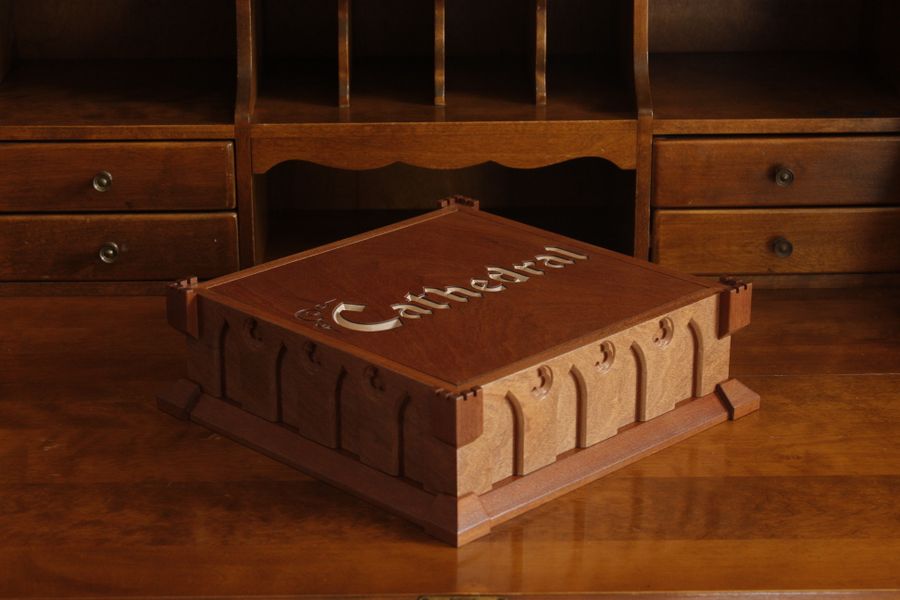 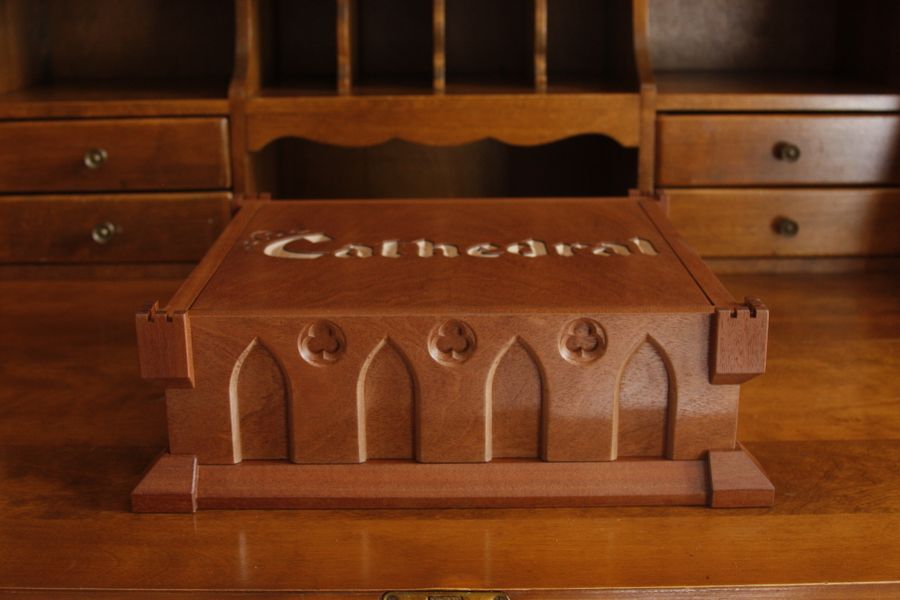 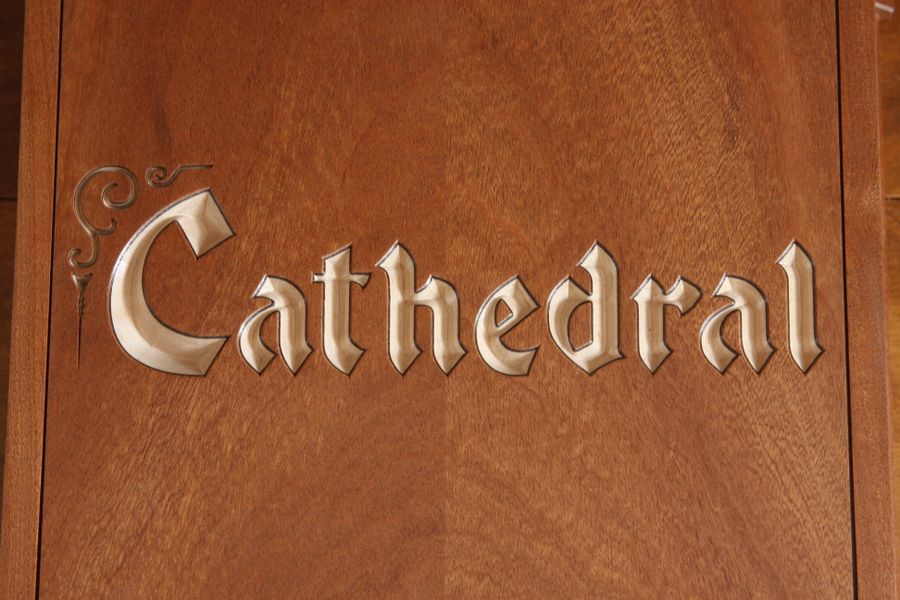 An inspired suggestion came from an artistic friend that I love bouncing ideas around with. The layer of black dyed veneer between the mahogany and maple really make the letters pop and give it a nice line weight. That same friend also designed the flourish on the left. 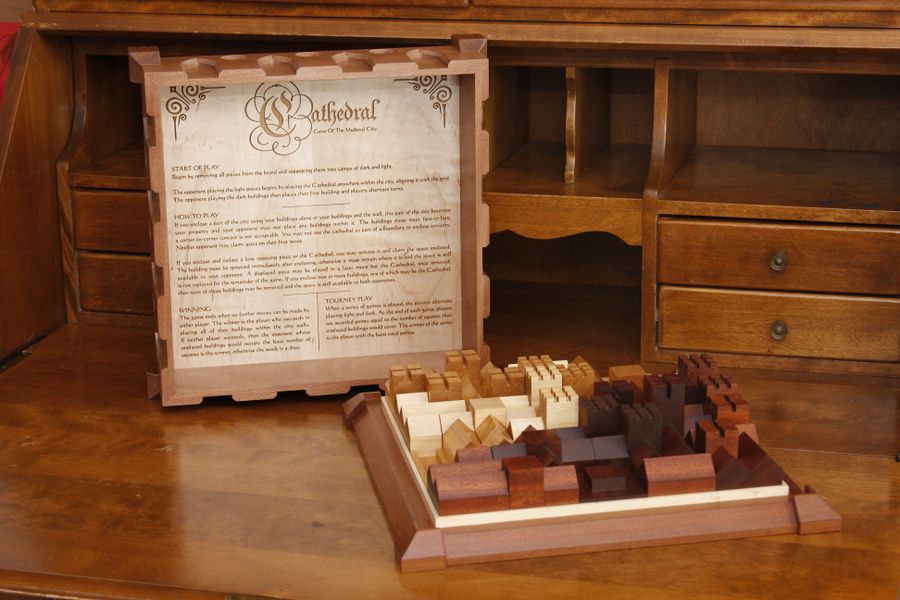 I'm really pleased with how the rules came out and gladly give credit to one of r/woodworking's other mods, u/Lt_Skitz, for creating the graphics and layout. He really made this look amazing and elements of it were used in the flourish on the top. 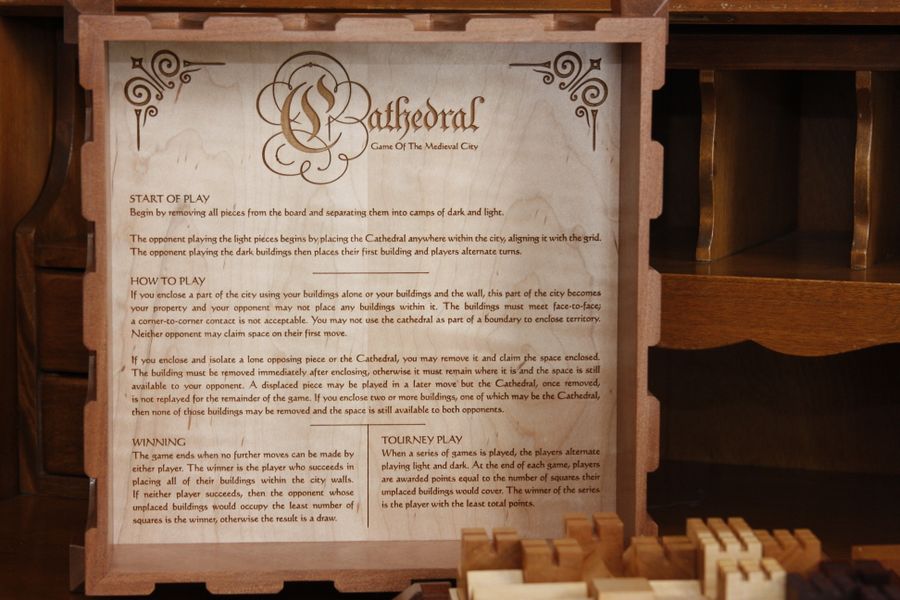 How all my projects start, in Sketchup. I may have a tendency to outdraw my skills but my obsession with creating what's in my head usually has the latter catching up eventually. 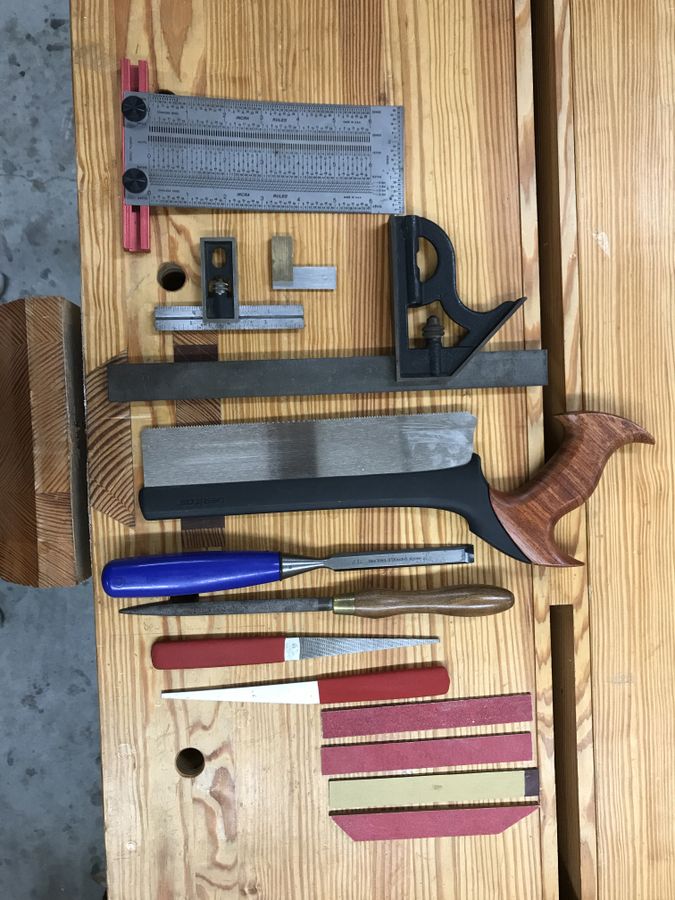 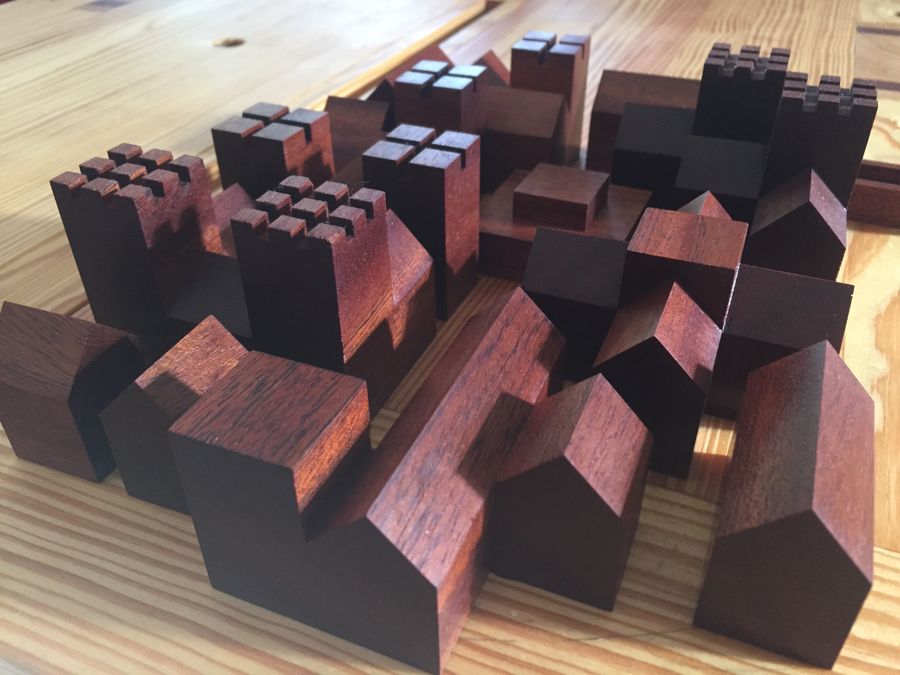 This is the earliest picture I managed to recover. All the mahogany pieces had just been finished. 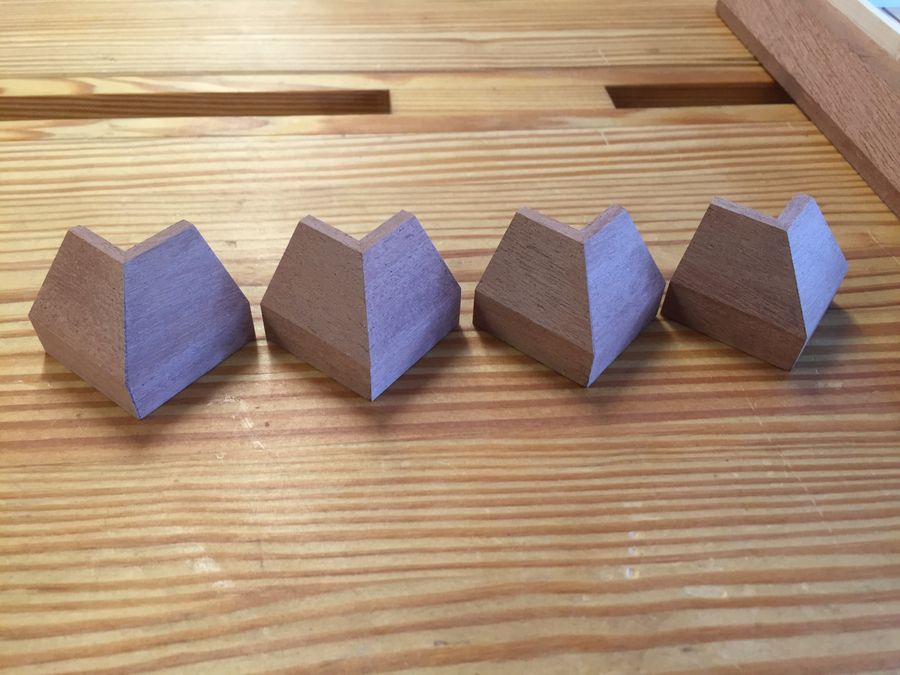 Making the corner caps for the board. Shhh...don't tell anyone, but they're a discarded idea I resurrected to cover up a screw up. I ended up liking them better than the original plan. 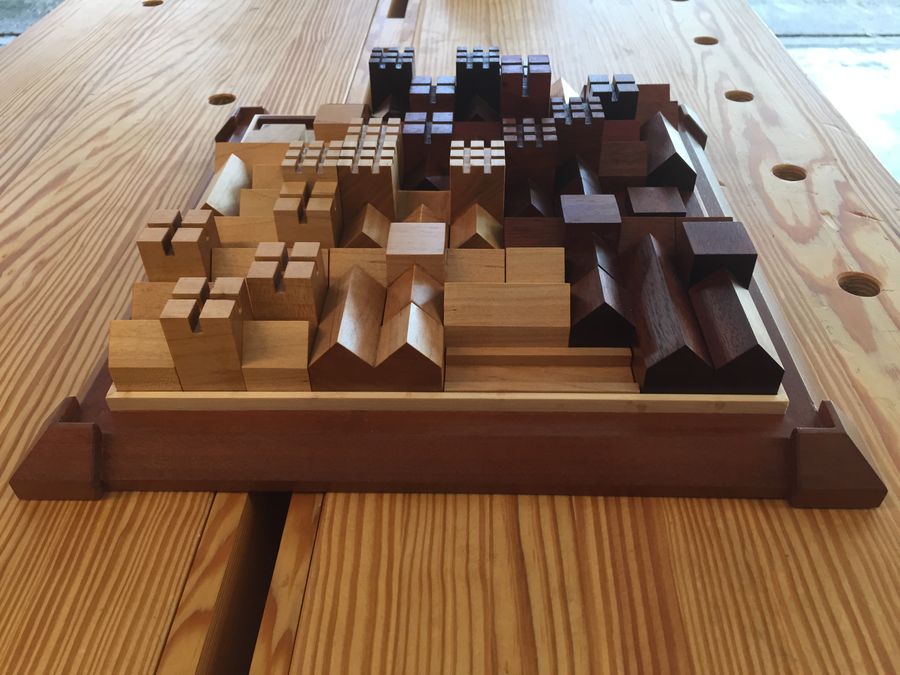 Pieces and board completed 18 months ago, project put on hold until.... 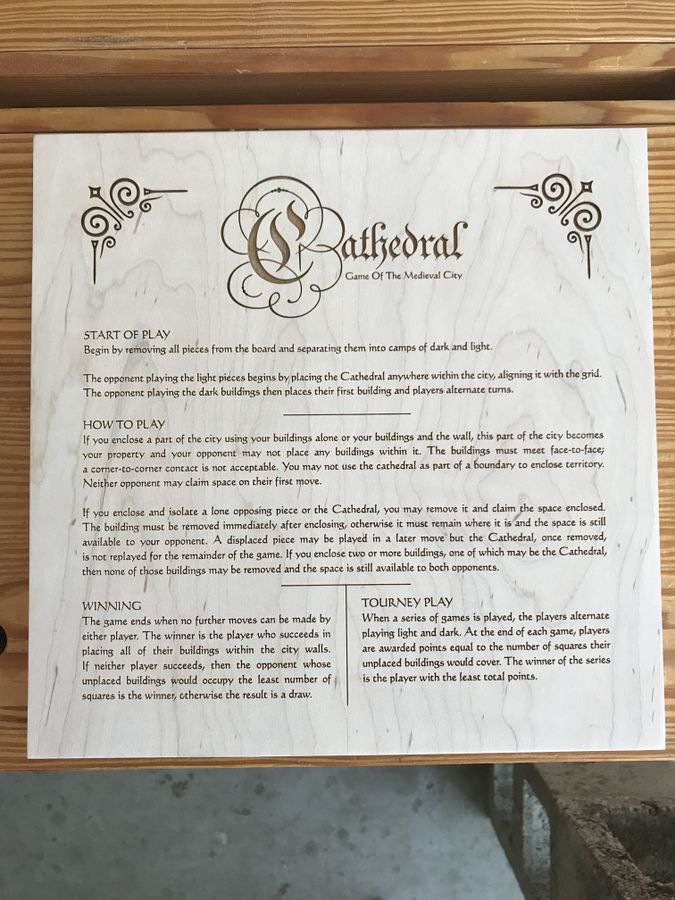 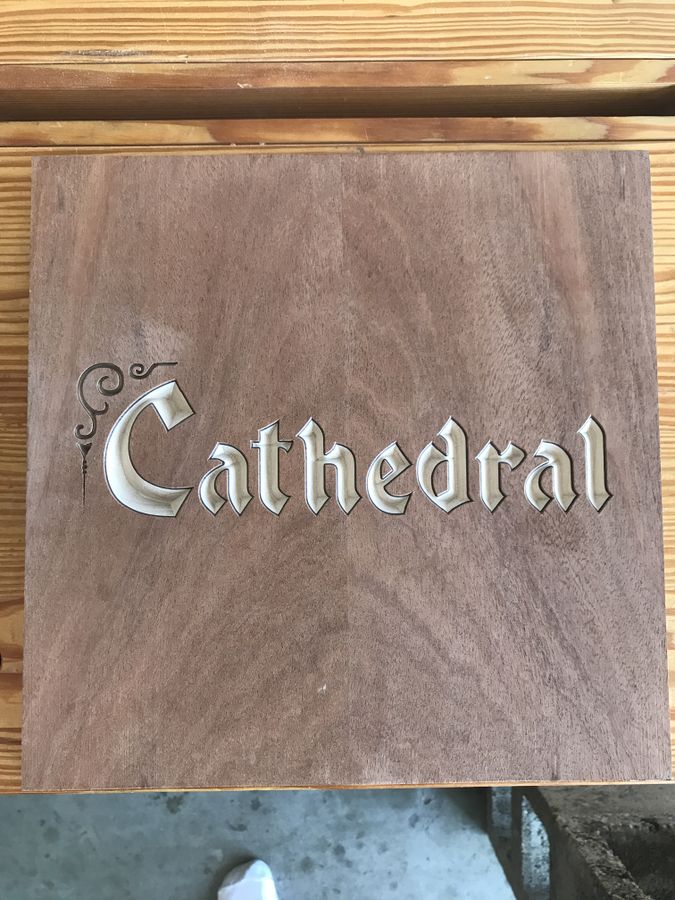 Can you tell where I had another happy accident? As an old timer once told me, 75% of woodworking is fixing your mistakes and you only get bonus points if you make it look like you meant to do that. 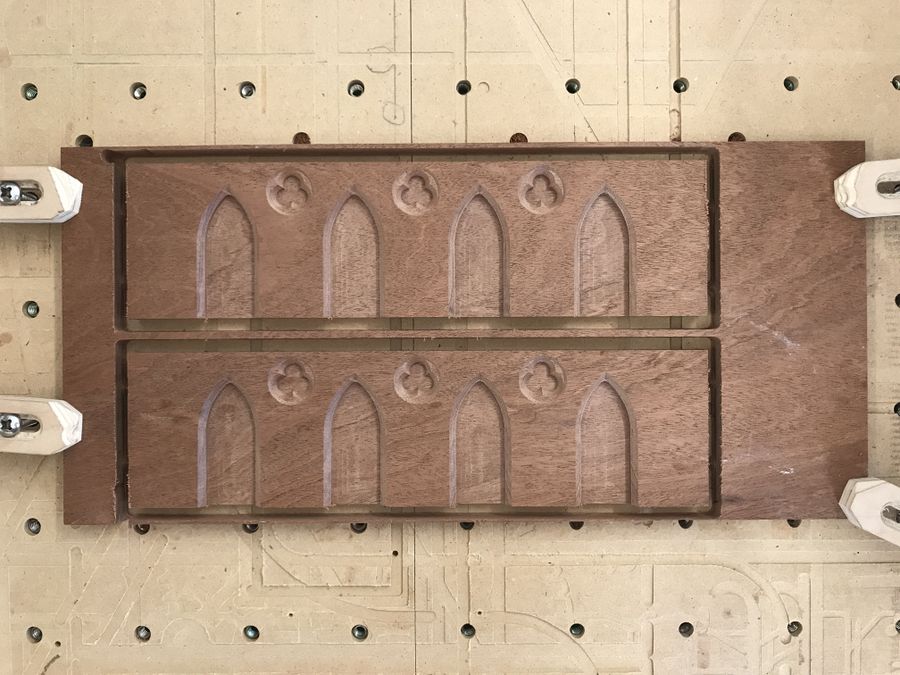 The lid walls as the emerge from the CNC. 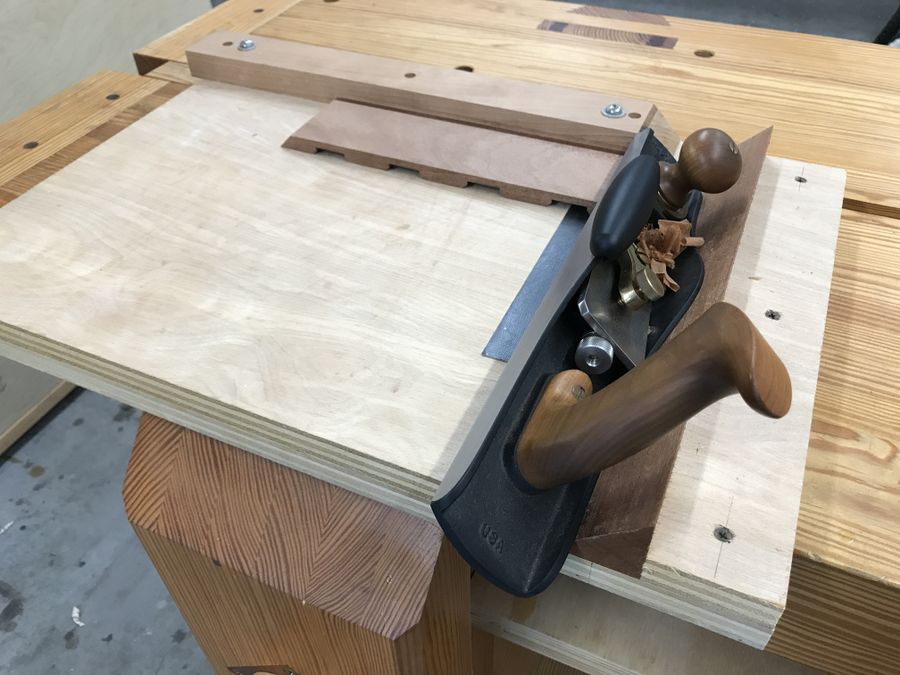 I may play with a CNC but I still do it old school too. Shooting the miters to perfection. 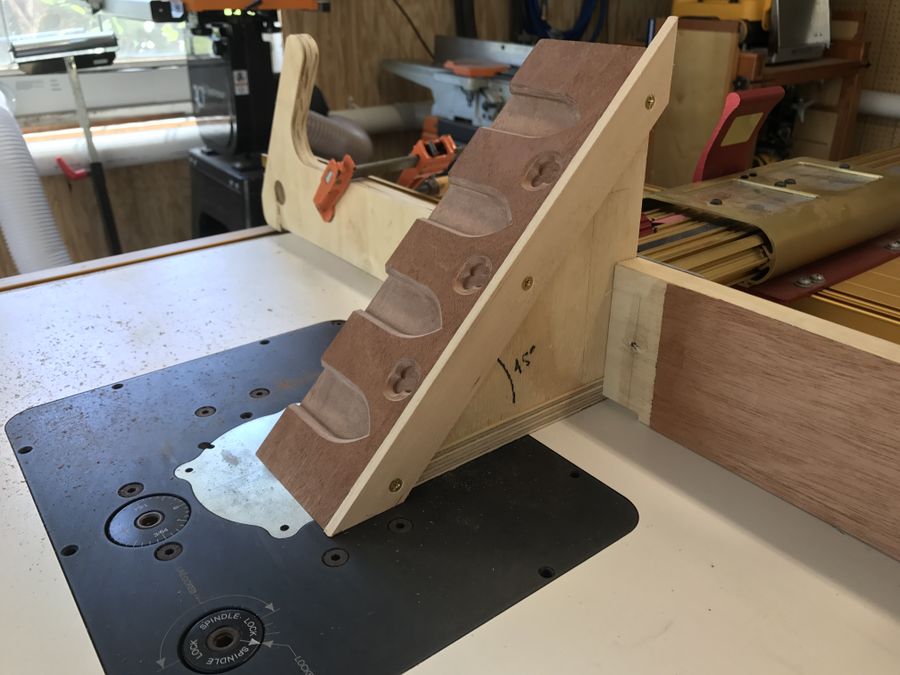 My little jig for cutting the hidden splines that will beef up the case miters. 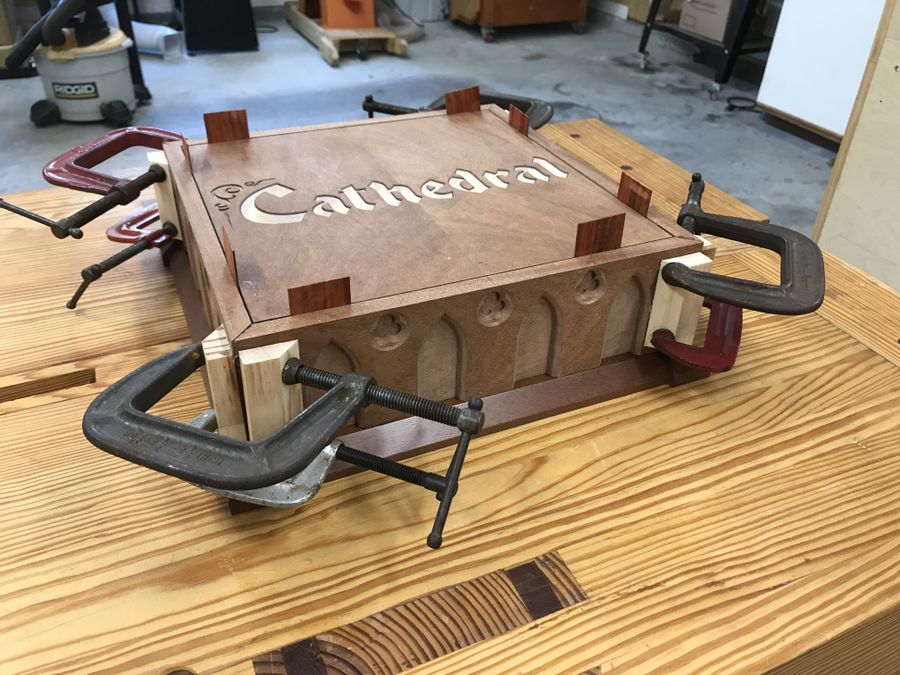 I realized band clamps (...and this one time, at band clamp...) are a pain in the tuckus so I hot glued some strips to the corners and clamped them much more efficiently. The panel may be veneered but its substrate is a solid piece of maple so is subject to expansion and contraction. I gave it a healthy gap to expand in and only glued it at the center so it will expand equally on both sides and not shift. The shims keep it perfectly centered while the glue dries. 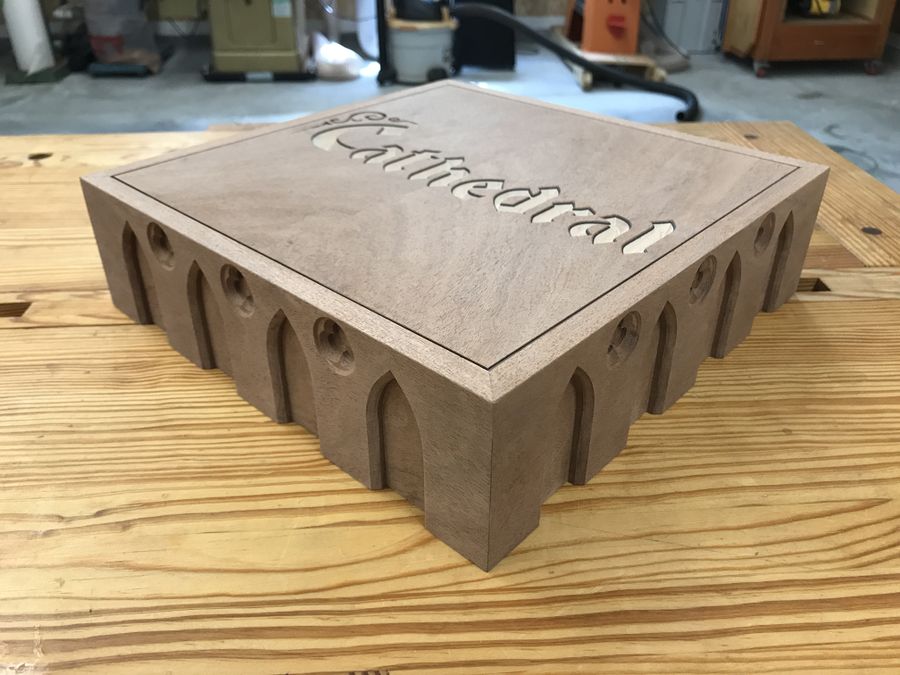 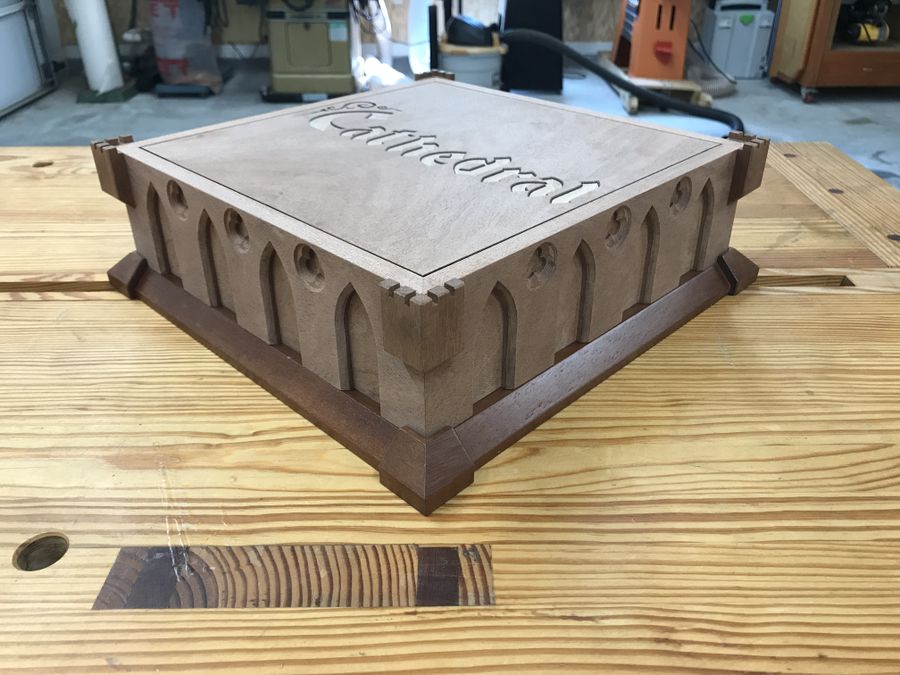 Happy little corners. Both top and bottom caps were glued on with Titebond's Thick Wood Adhesive (CA glue) and have proven to be quite strong. 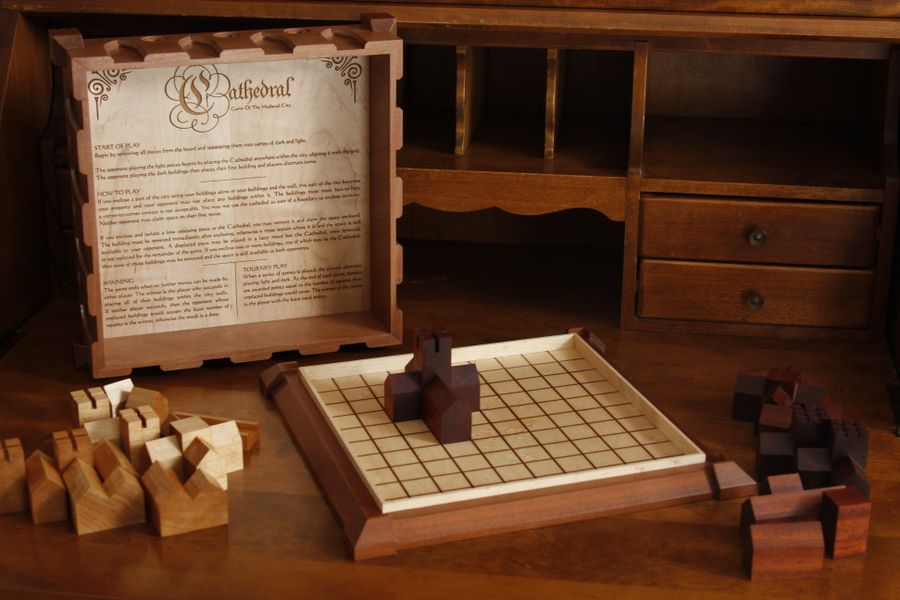 A little closer look at the pieces and the board. The base, like the lid, is just a panel in a mitered frame. Unlike the top though, it's MDF with mahogany veneered on one side and birdseye maple on the other. All veneers, except the black dyed veneer in the lid were shop sawn. The original board's lines were just black printed lines on MDF but I opted to do mahogany string inlay. I used a 1/16" router bit to cut all the grooves in one direction, glued in the strips, planed them flush, then repeated in the other direction. 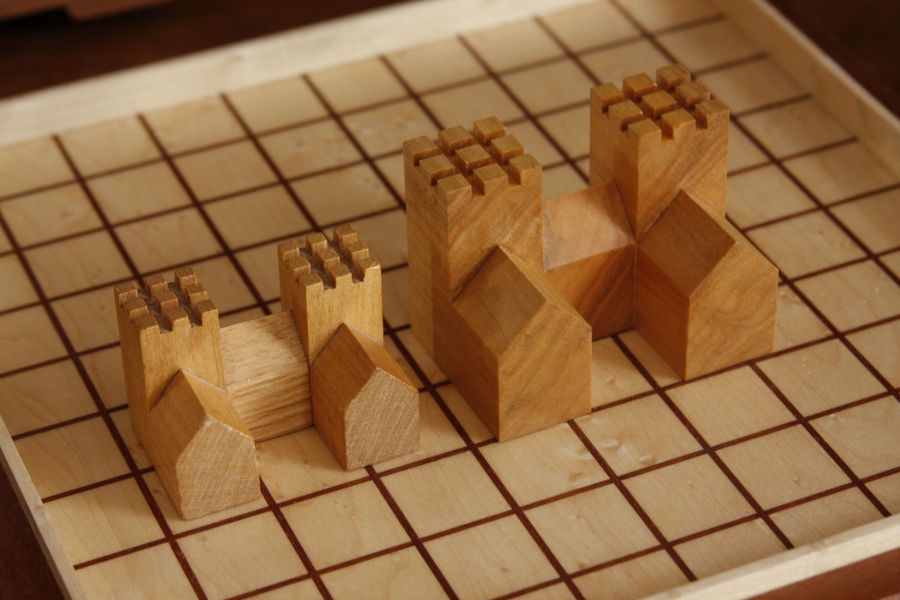 I upscaled everything, in part to make building easier, but also because I thought it would look nice a little chunkier without getting too big. The whole board only measures 13 x 13. This is the "Castle" and that roof in the middle was a a tricky one to figure out until I made a jig to hold it upside down at an angle and run it over a flat router bit. 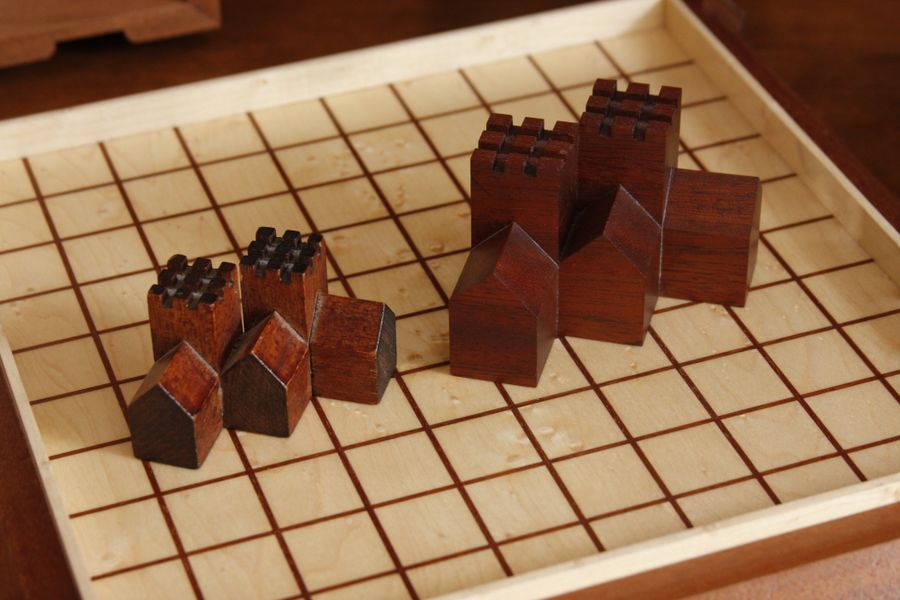 The "Tower" was the hardest one to figure out and it mostly came down to order of operations and a lot of chisel work. Because of that, it's my favorite piece. 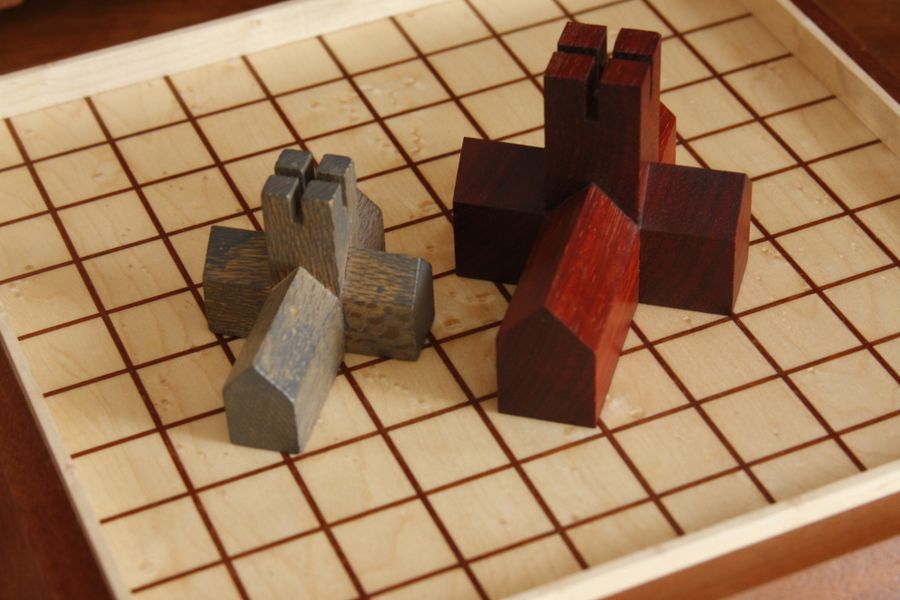 For the Cathedral itself, I tried to find a wood that was distinct from the two other colors and tried paduak. Unfortunately, as it ages, it looks more and more like the mahogany. I think I'll try to get my hands on a block of african blackwood or wenge and replace this eventually. 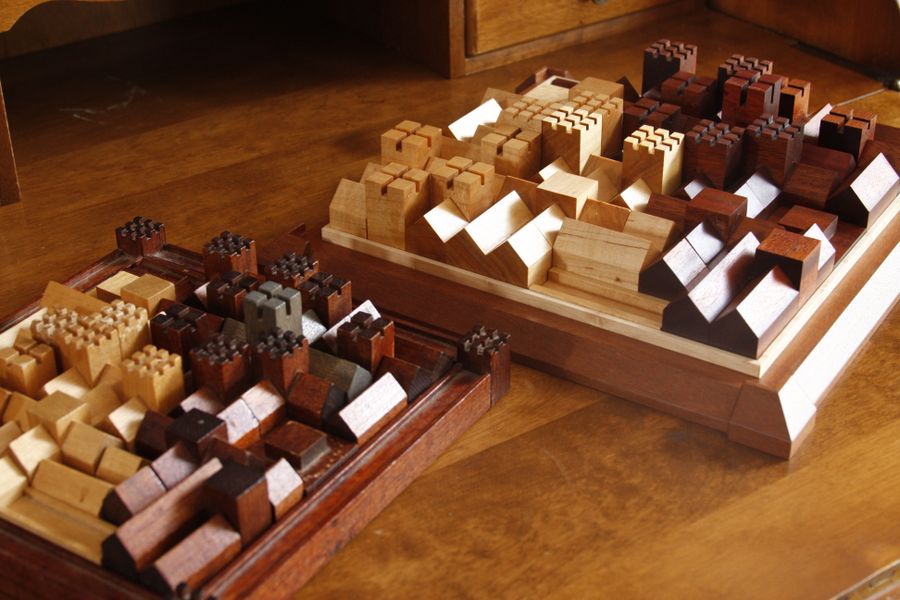 The original alongside my attempt. I like the new one a lot but I'll still hang on to the old for the nostalgia. 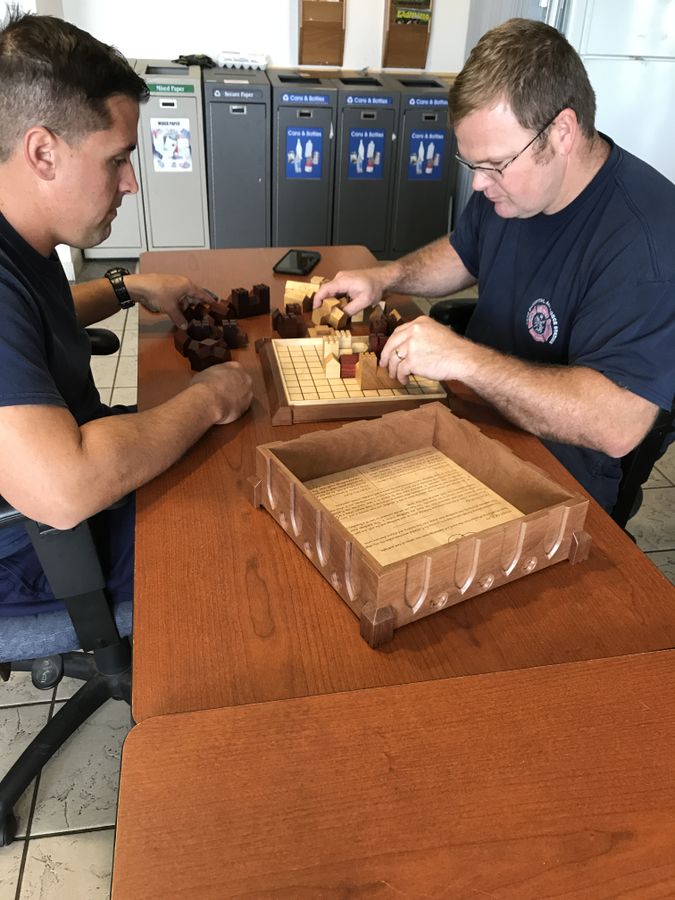 Crikey! Here we see some firemen in their native habitat as they battle for dominance of the herd. Shh...don't make any sudden movements. When utilizing this much mental reserves, the big one startles easily and is prone to violence and incontinence. Danger, danger, danger!

Wow, this is so awesome! I love all the fine details. I feel like this is the type of project that every time you look at it, you will notice a little feature you didn't see before.

Thanks so much! It was fun adding all those details but I had to keep reminding myself that the original pieces had a very minimalist feel to them and I didn't want to go overboard!

Wow, this is so awesome! I love all the fine details. I feel like this is the type of project that every time you look at it, you will notice a little feature you didn't see before.

Wow. Take my money. I want one! Cathedral is the first non-mass market games I ever got. It is an old favorite. Stunning work!

Thanks for the great complement! It was one of my first games too.

Wow. Take my money. I want one! Cathedral is the first non-mass market games I ever got. It is a old favorite. Stunning work!