This is my first hand tool projects that I've ever pursued. It's a slightly modified Nicholson knockdown bench with a leg vise and a laminated top. This project will cover a little bit of everything, from initial tool acquisition to the final bench, as well as many goofs, screw ups, and probably some cursing.

I worked a fair amount in the wood shop while in architecture school, but always had access to numerous power tools and large machines. Since much of my day currently is spent on a computer, it feels nice to use my hands to create something in such a tactile way, and my limited experience with hand tools had satisfied that craving.

The biggest factors holding me back from really investing in learning more was cost, space, and of course, time. Three years post graduation, I've got some spare cash - I now rent a house with an attached, but unconditioned garage - and I don't really have any time but that's been a pretty recurring theme in my life so far, so I just said it's time to give it a shot. 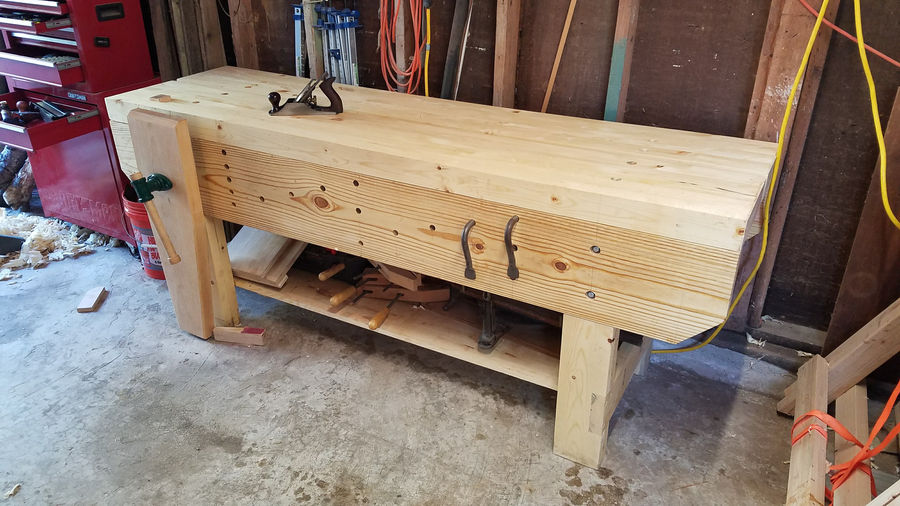 Pretty happy with how it turned out. I may one day add a surface vise or maybe a steel planing stop, but until I need something, I'm going to work her as she is. The difference between the "whitewood" and the SYP is pretty obvious here. 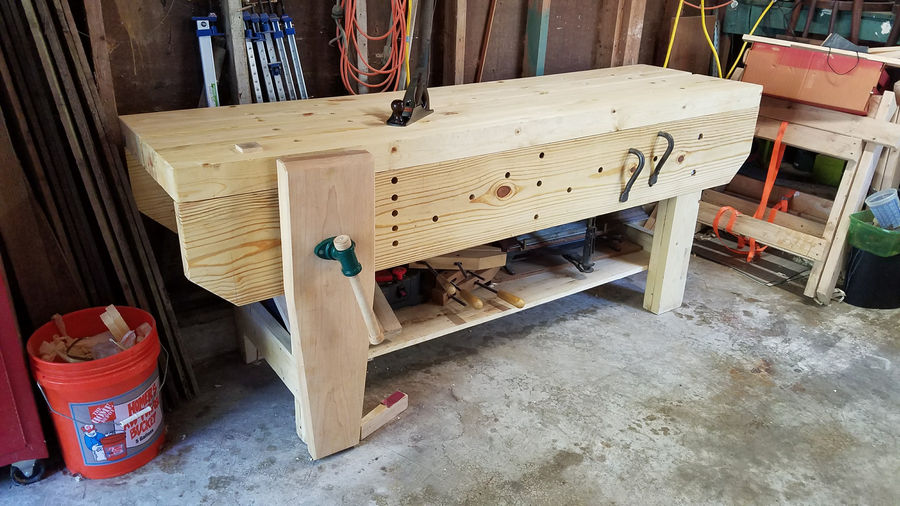 I had doubts about the leg vise after I made it. It's kind of slow and heavy. But, for some pieces that I've been working on, the whole vertical length is awesome. Add in a holdfast or a peg to support it across the apron, and it's really awesome. 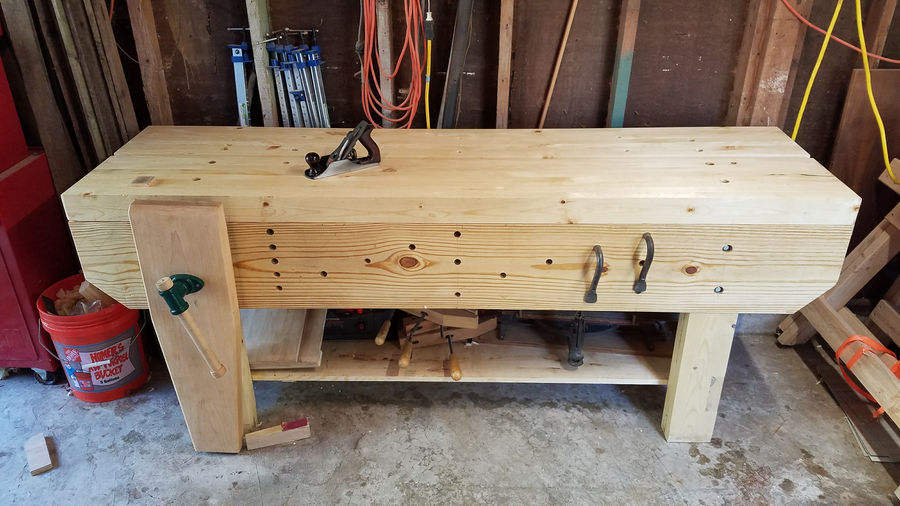 If you're new to woodworking and don't have a lot of tools, I really think laminating tops for a bench is a huge thing to take on. It's a lot of work without power tools or proper know how/experience with hand tools. Paul Sellers makes it look so easy, but not all of us have a lifetime of experience behind us. If your glue-up goes poorly, you'll pay the price...which will be terrible if you don't have sharp/the right tools. Better yet, do what Mike Siemsen/CS recommend and use a 2x12 with some added thickness to it. 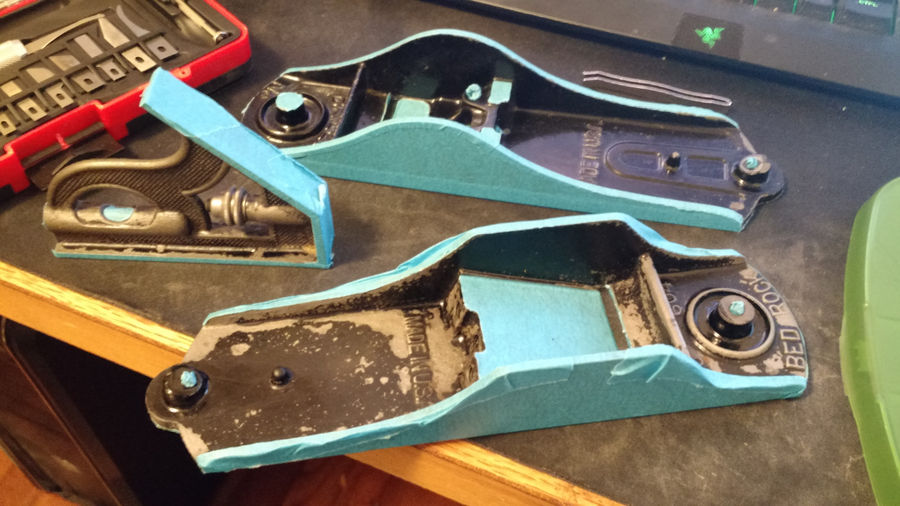 Starting here seems fitting. I found a box of old rusty tools on CL and gave the guy a call. He was just getting rid of "junk" from his wife's father. He seemed like he wanted to sell things individually, and the photos were bad but I saw a bedrock in there (at the time, I knew little about this but thought the square sided planes looked cool). I offered him $100 and he said that would work. I found two #4s, a #6 I still haven't cleaned up, a couple combination squares (this one was a starrett), a very small x-cut panel saw,and a bunch of other odds and ends. It's probably the best deal I'll ever find. 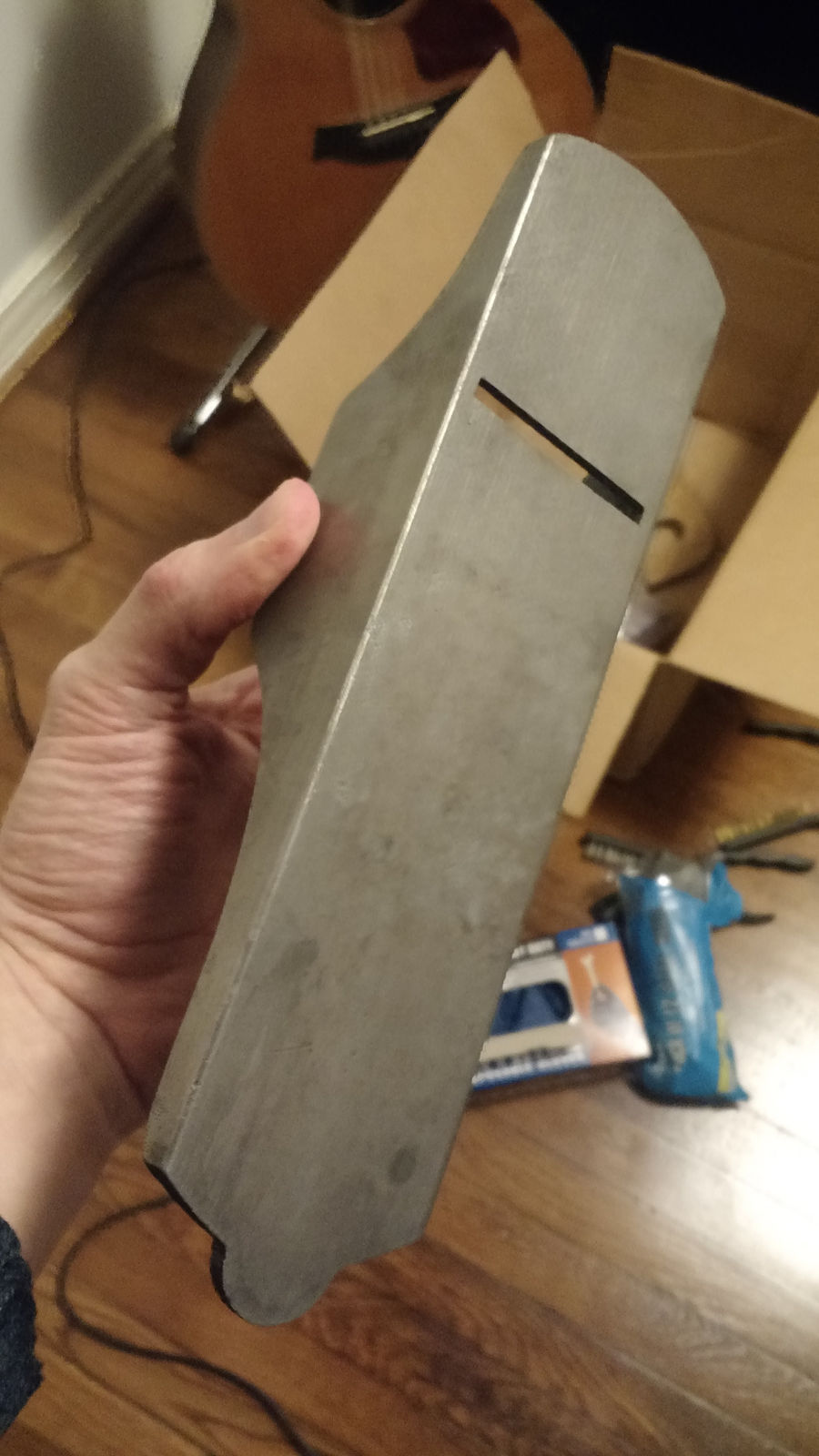 Rust bath and new enamel. They all cleaned up great. Flattening the soles and getting rid of chips in the irons took a while, especially since I don't own a bench grinder. I was also trying to sharpen freehand, which in my several months more experienced opinion now, is stupid for anybody to recommend to beginners...but everybody is different. 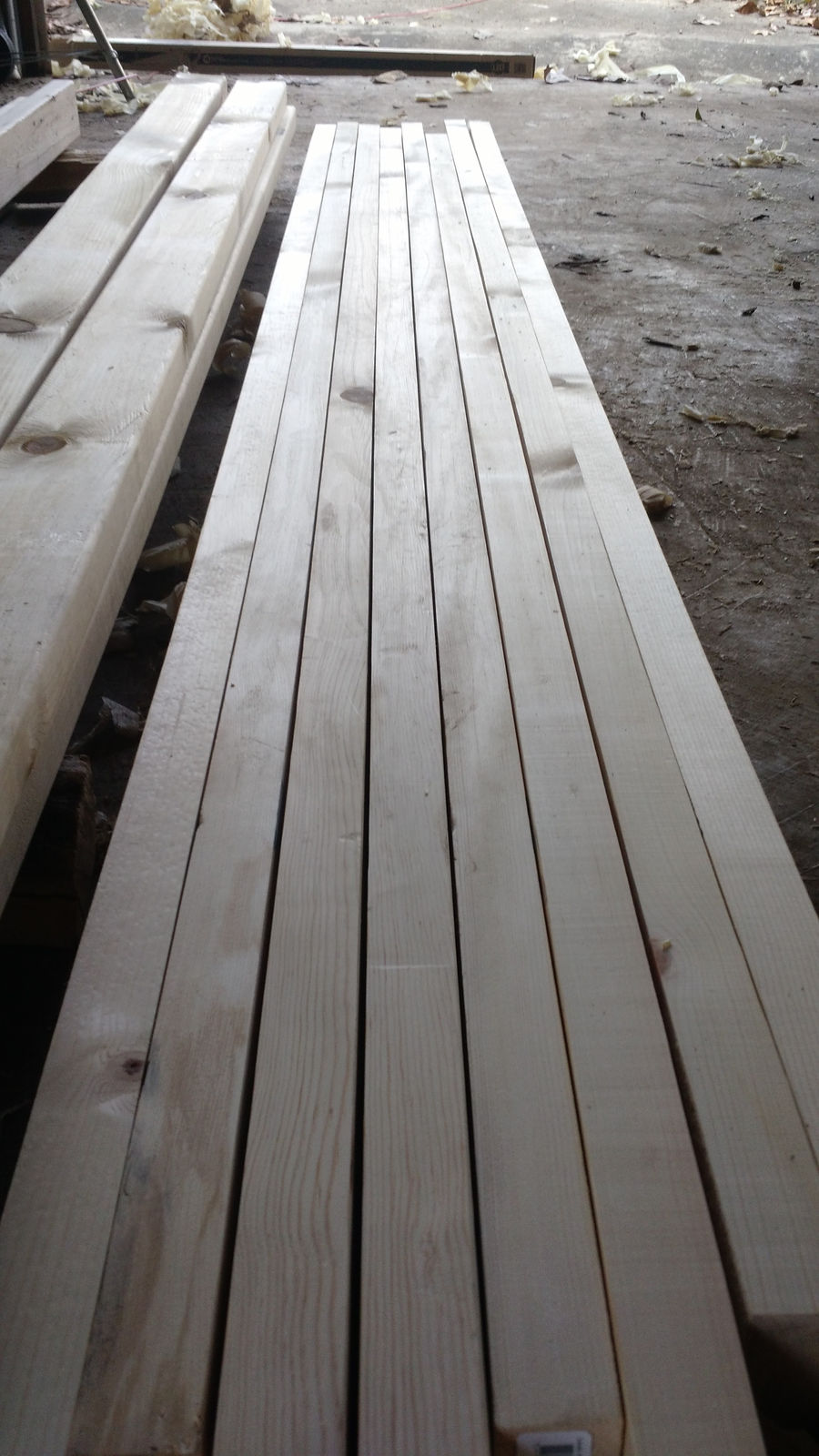 I dug for quite a while at the home-center to find some pretty nice wood. This is the "KD Whitewood" stuff. I really wish, in retrospect, that I had bought 2x12 SYP instead and ripped it all down. No photos of the process, but I used an old craftsman powered hand planer to remove the bevel off the wood. After that, I planed each board with a #4. 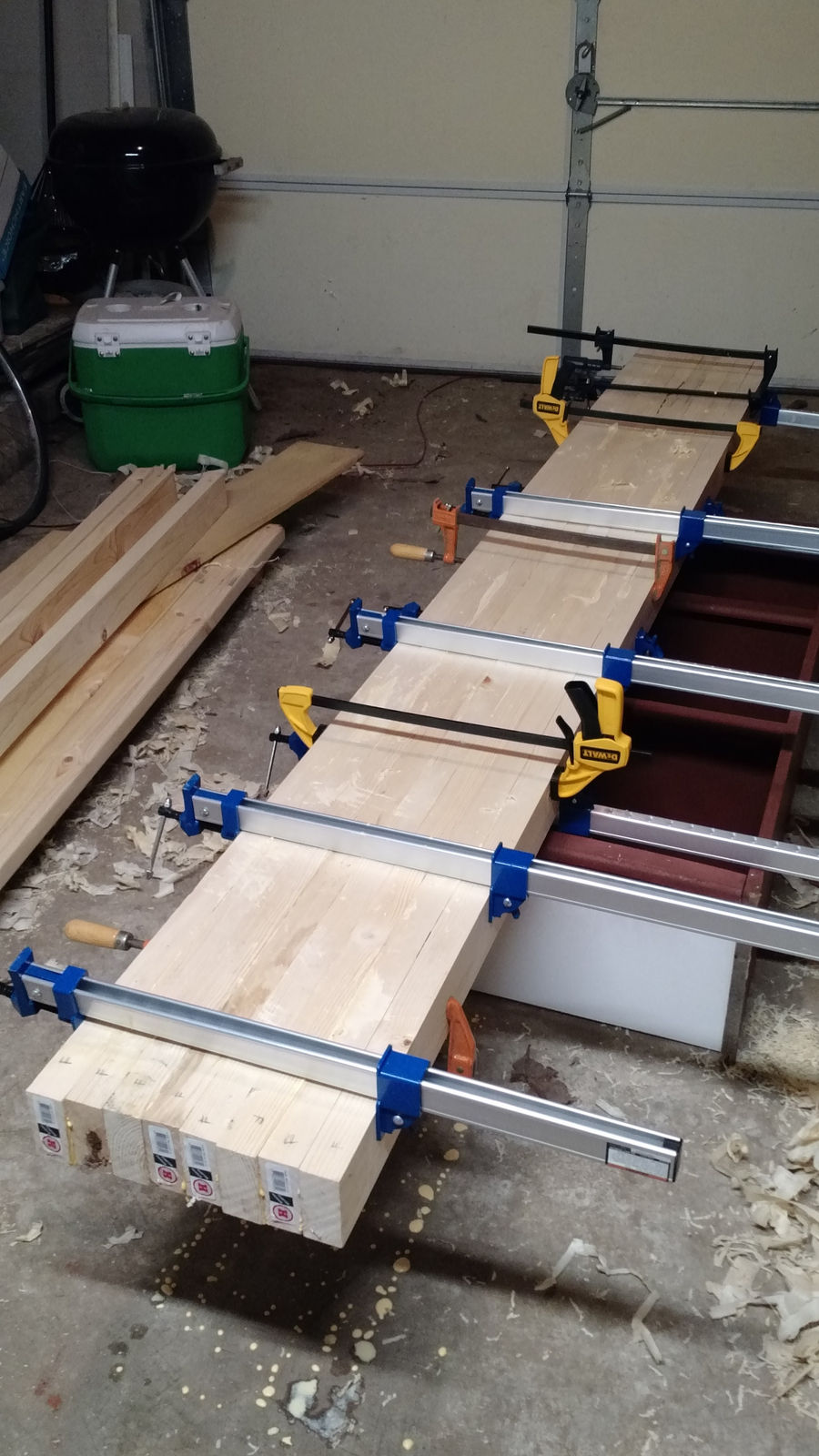 Talk about stressful. I'm still not sure how this turned out as well as it did. 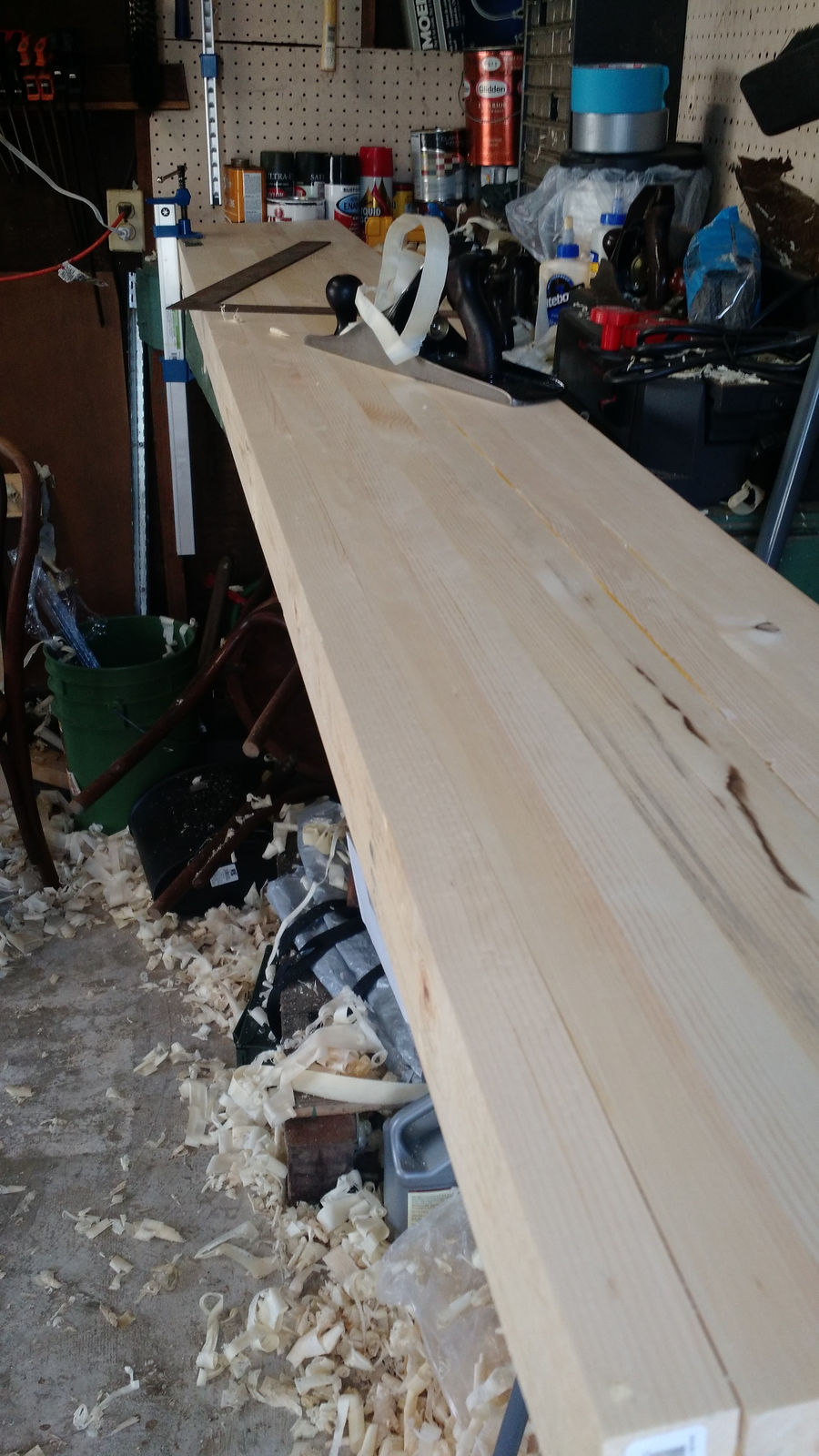 Glue up went pretty well. By this point I had picked up a #5 off ebay. It came pretty sharp, compared to what I was working with. I thought it was just the difference between a #4 and a #5 and felt foolish for using a #4 at all. I didn't really know much about sharpening at this point. 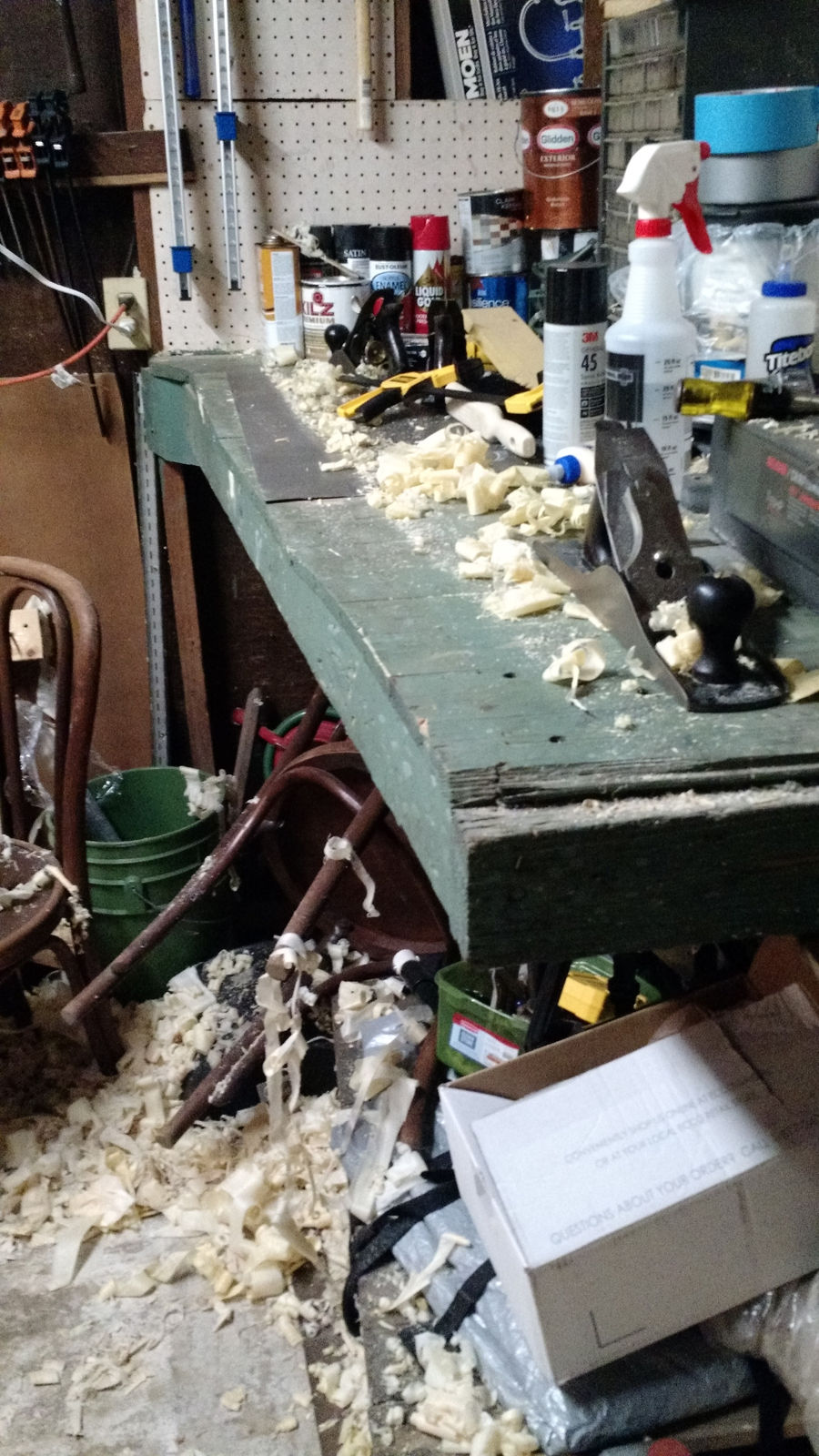 This was what I was doing my planing on. Way too high for comfort. I just planed towards the wall. 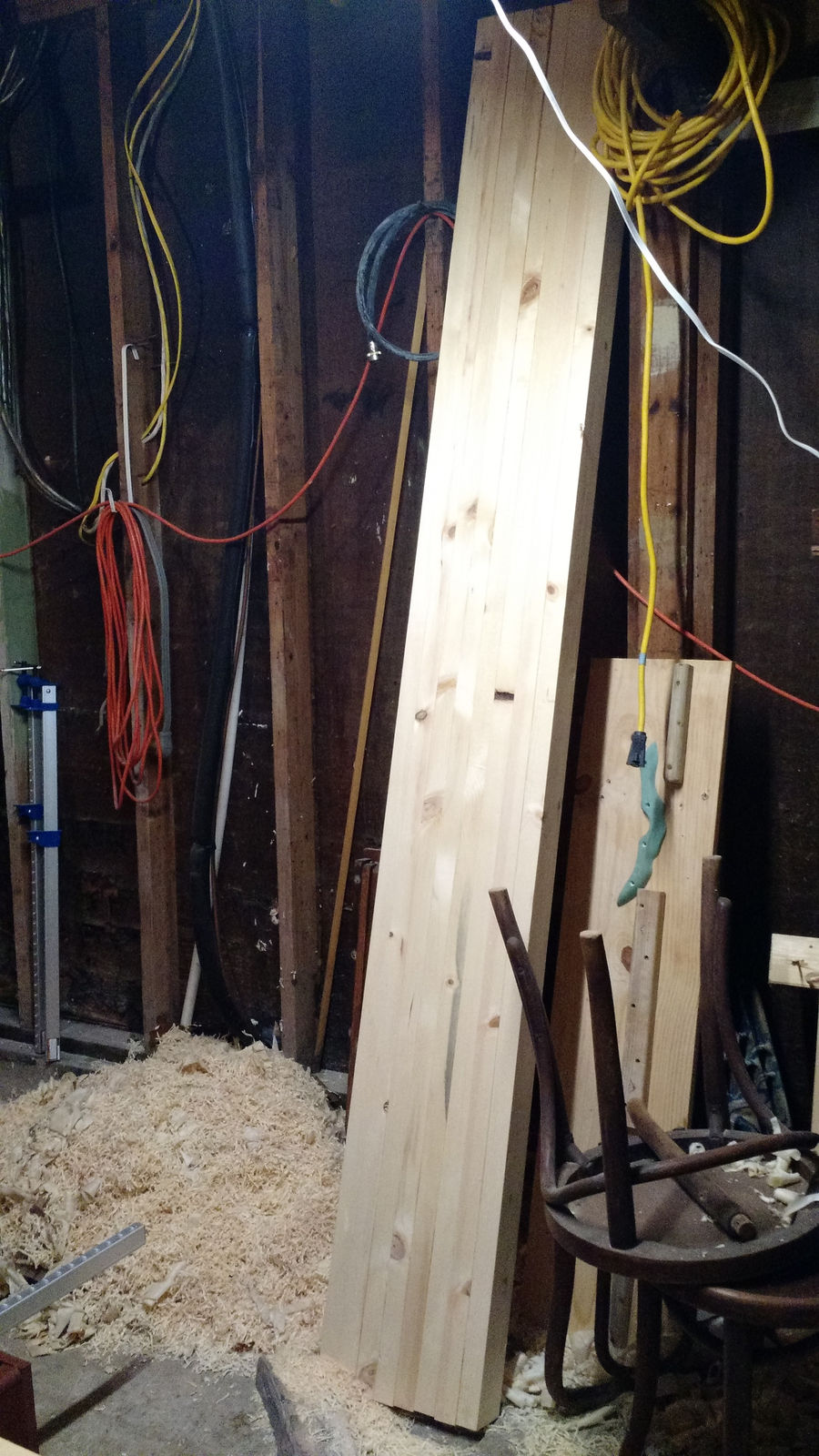 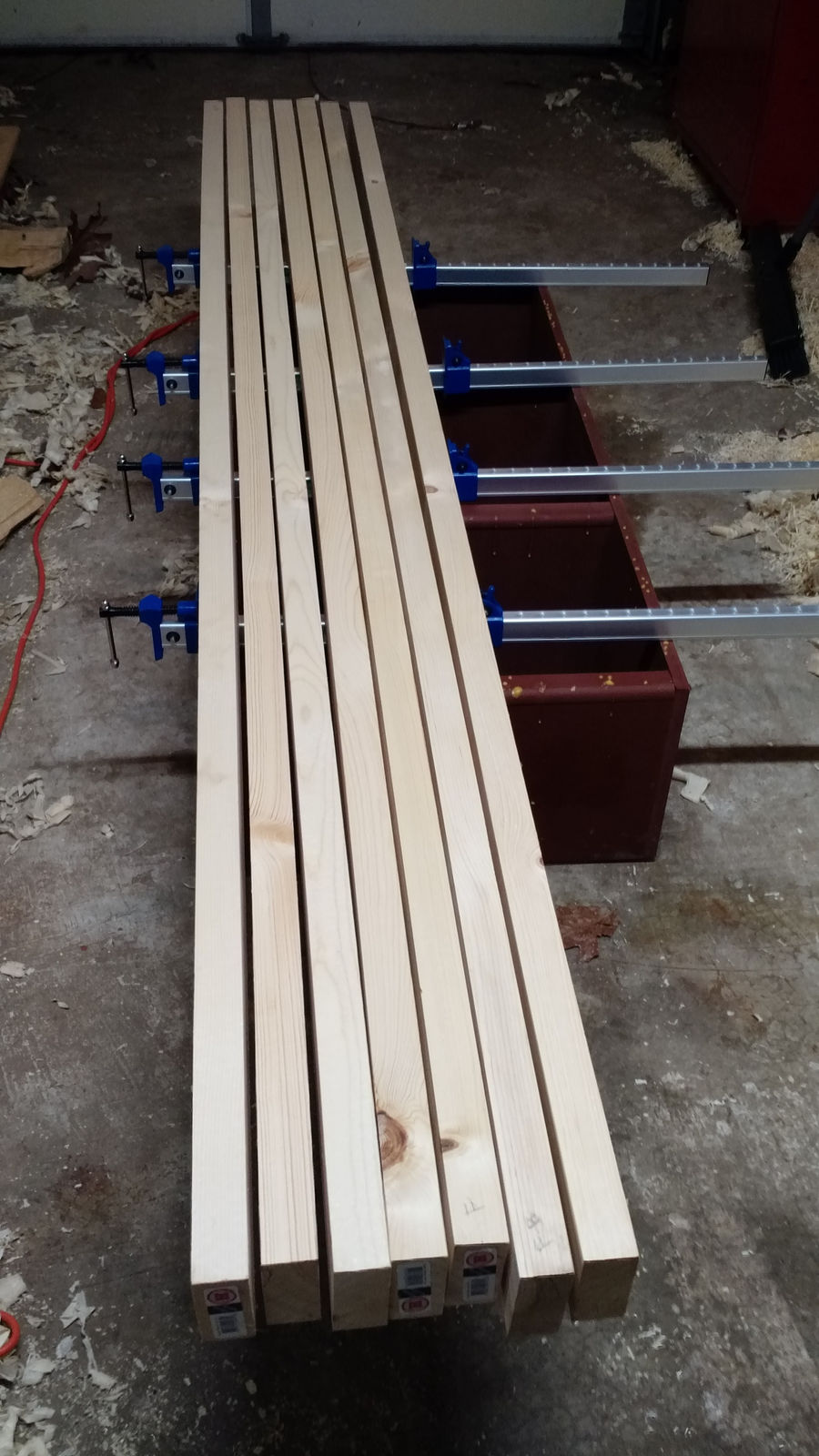 Talk about a hard time to get motivated for another one of these. At this point, I started doubting this bench build being so "easy". Paul does his with a well on the back half, but I didn't like that idea and wanted more surface. I deciding to do more of a split top style, but keep the rest of his design. 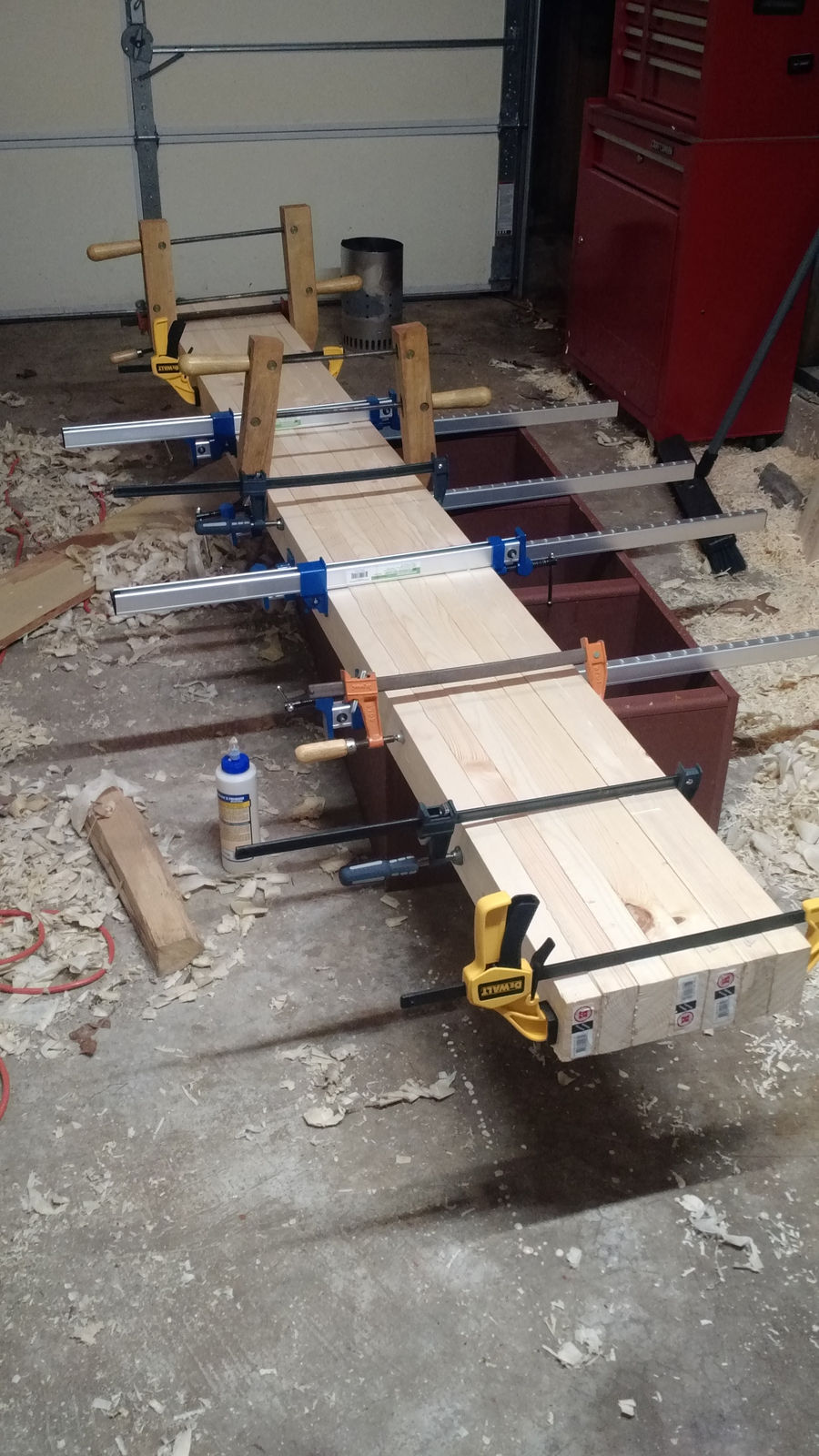 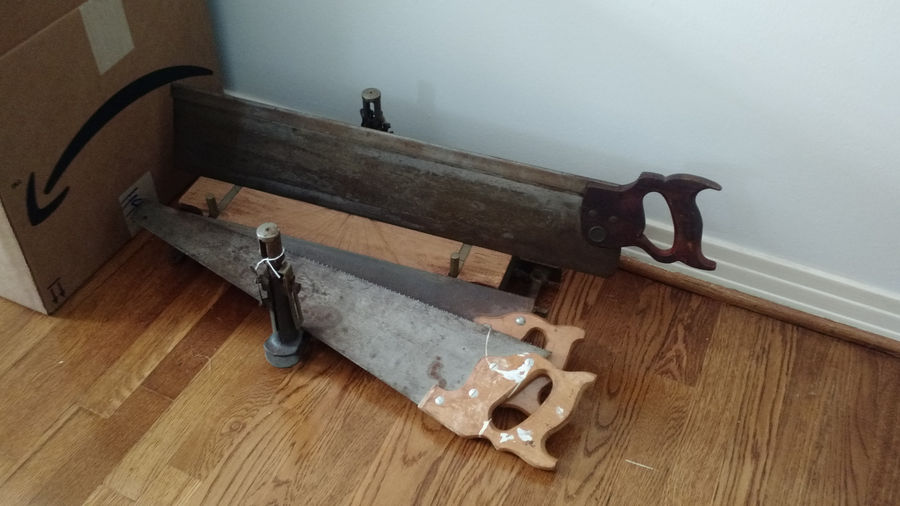 Still acquiring tools, I bought my first saws. The two panel saws are a rip and crosscut, and maybe mid 80s if I had to guess Disston saws. The real surprise was the miter box saw that I got for 35 bucks. It turned out to be in incredible shape, and proved invaluable to the rest of my build. 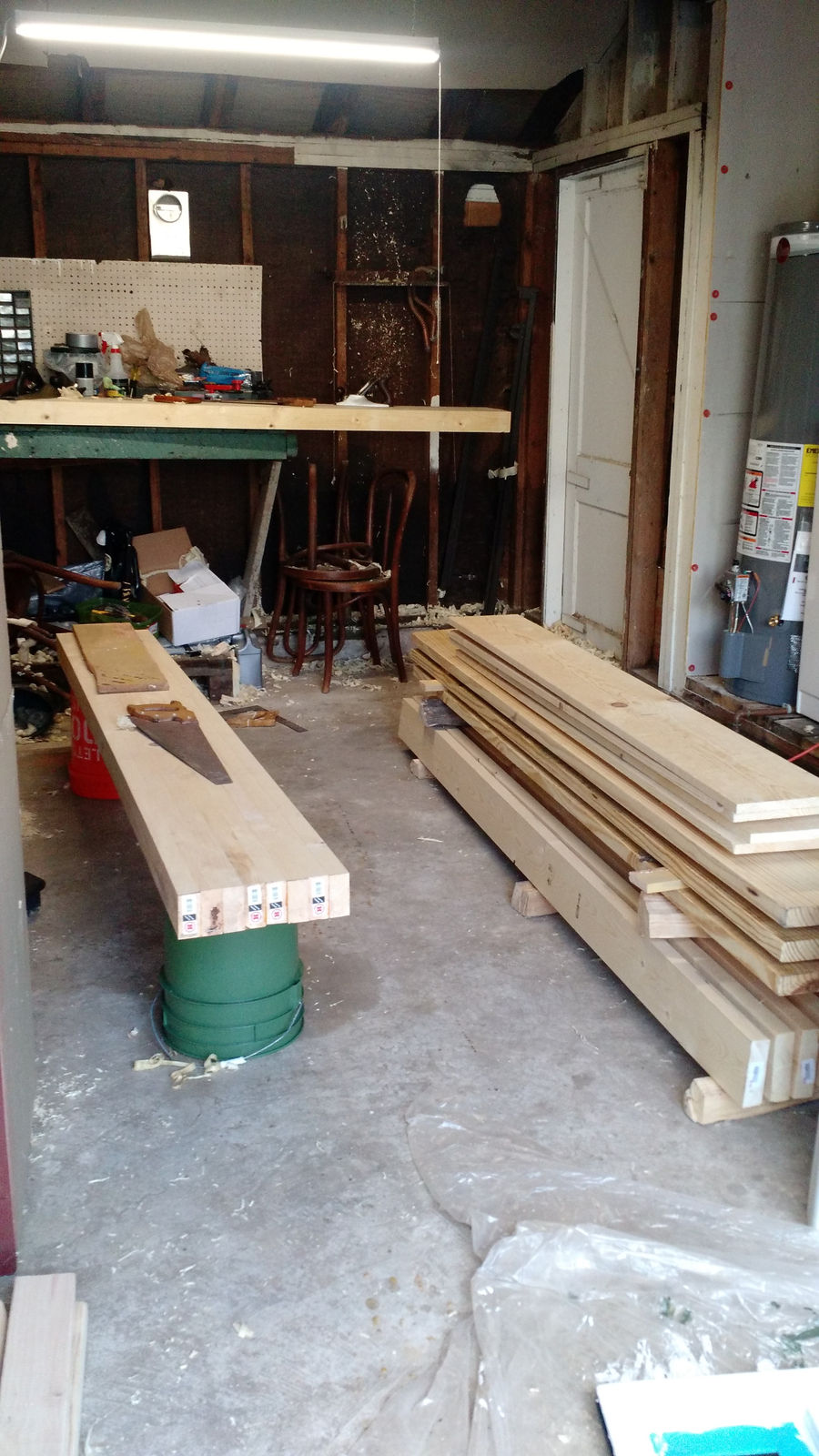 Not much space in here, but I tried to keep it clean. In the back are some Thonet bentwood chairs I hope to restore someday. 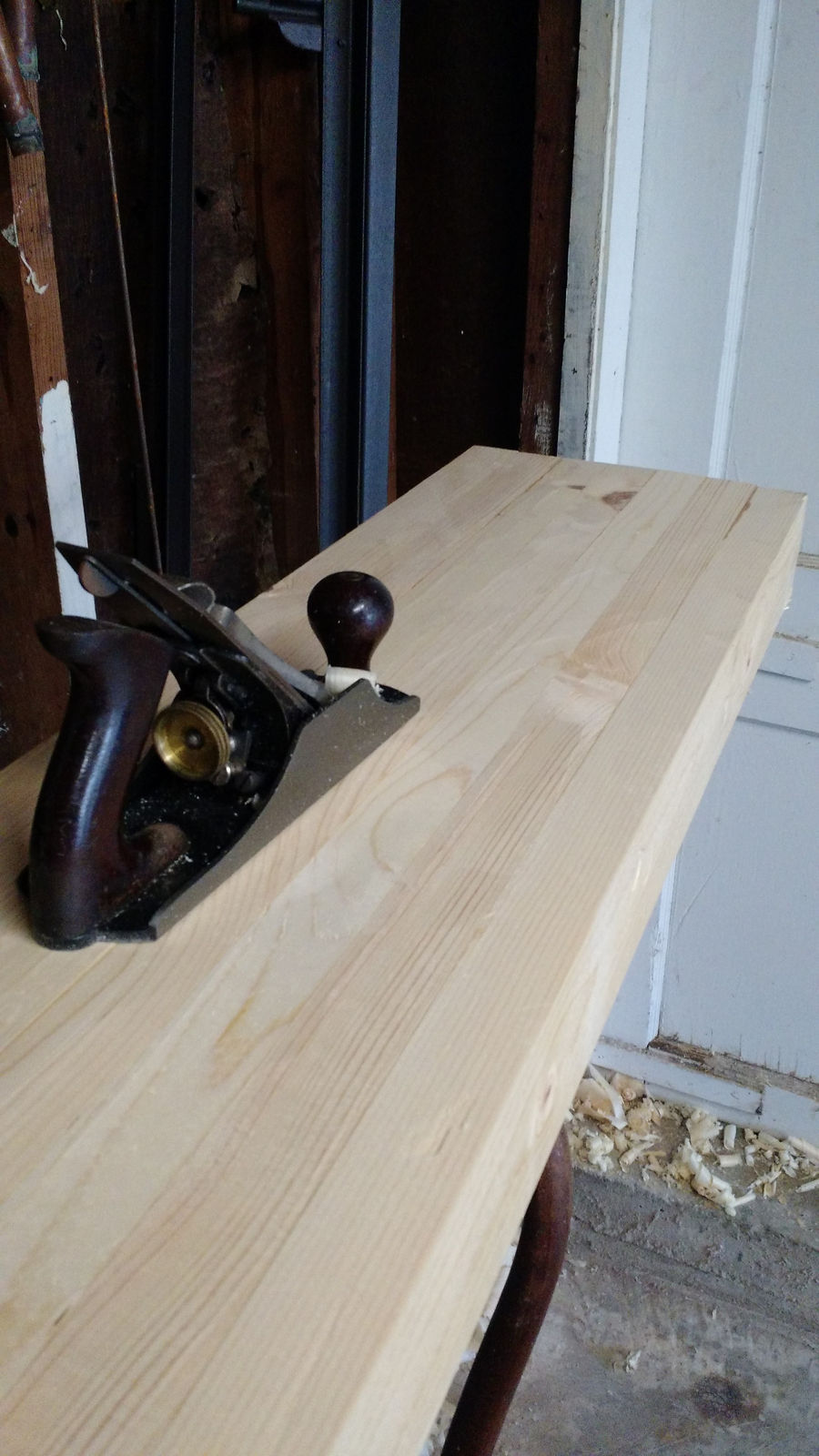 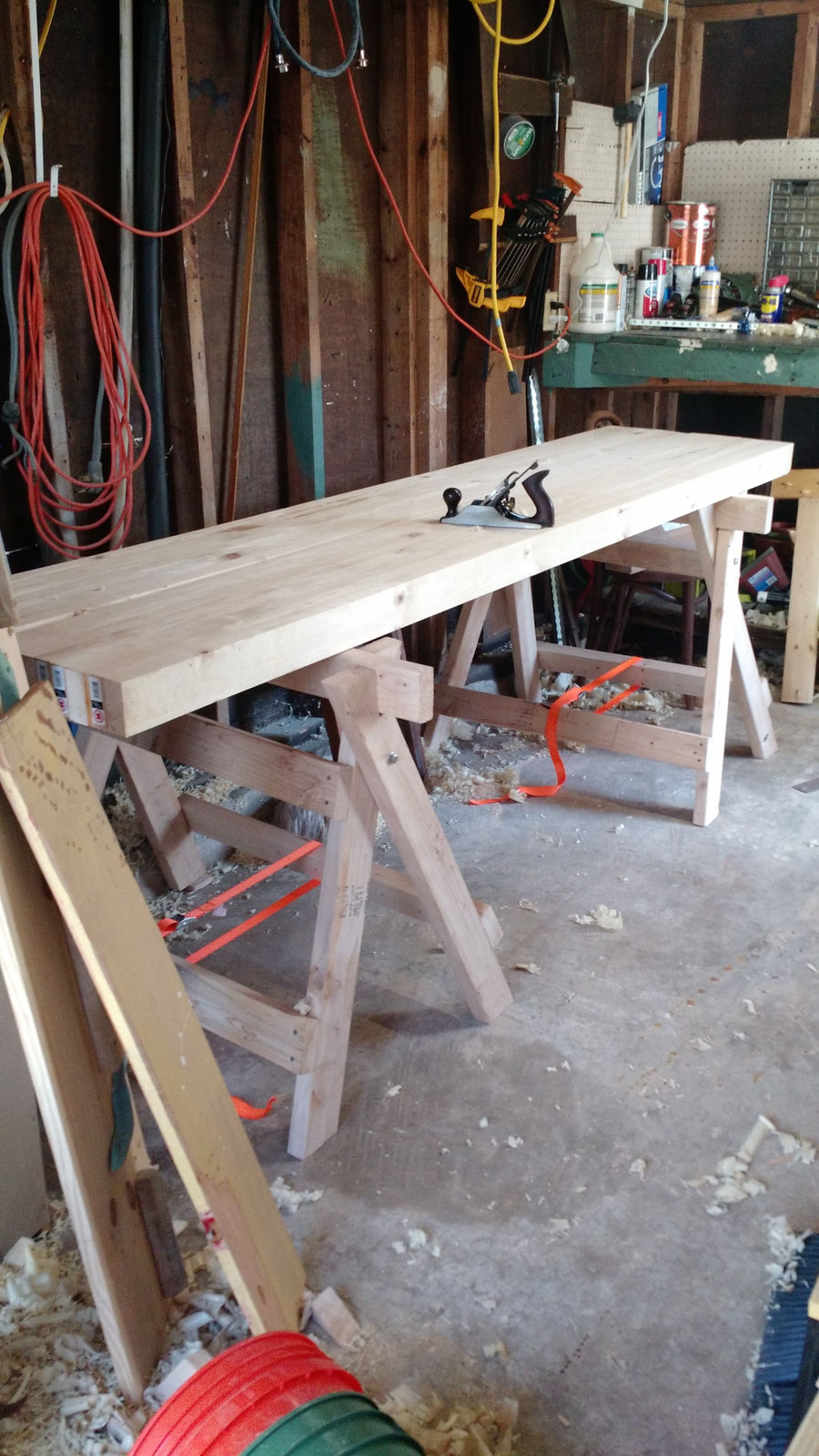 The rest of the build seemed so far off at this point. I had to break for a while to make sawhorses, all by hand. While I was doing this, I learned a lot about using hand tools. I also researched a lot, and watched Mike Siemsen's awesome free video about workholding on his Nicholson Bench. No discredit to Paul Sellers, but I didn't really understand how he was holding hardly anything on his bench. It seemed like there were so many operations that it was kind of inadequate for, especially since the stock I would eventually be using was not s4s.  I decided to instead do a Nicholson style bench with a leg vise, and find a way to make the laminated tops that I had done work on my new bench. This is when I found the knockdown bench Chris Schwarz designed. 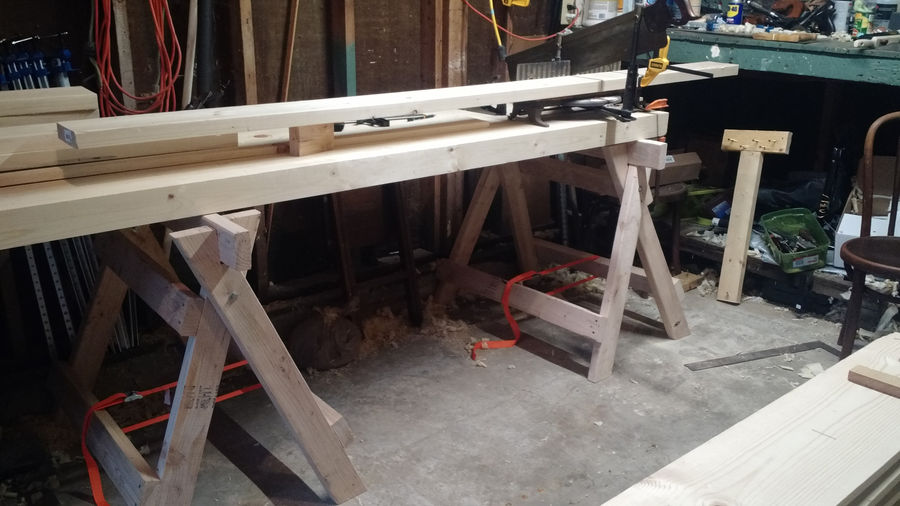 Seriously might be one of my favorite tools so far...but as my skill grows I tend to reach for it less. 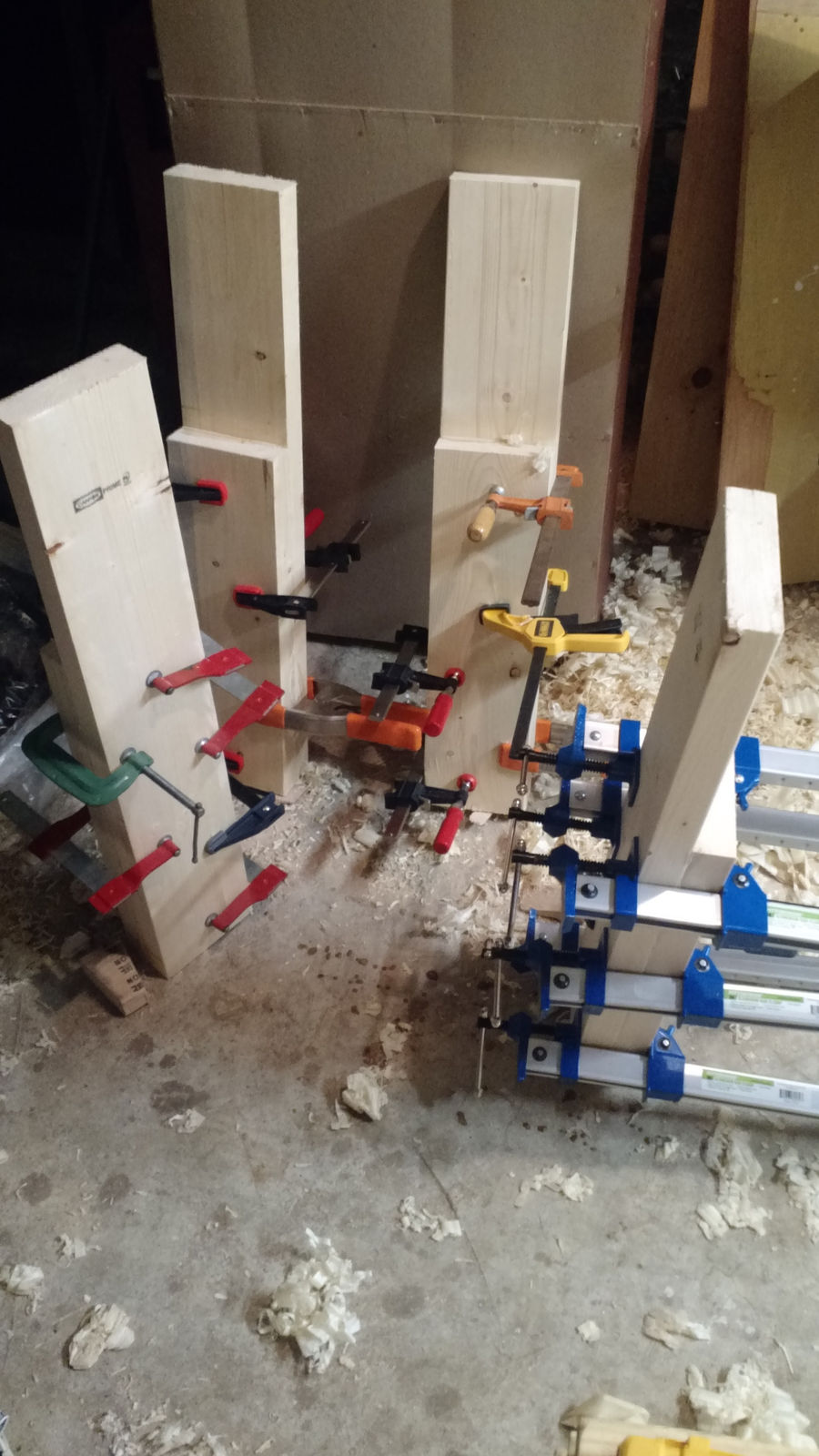 Gluing up the legs. Never too many clamps. 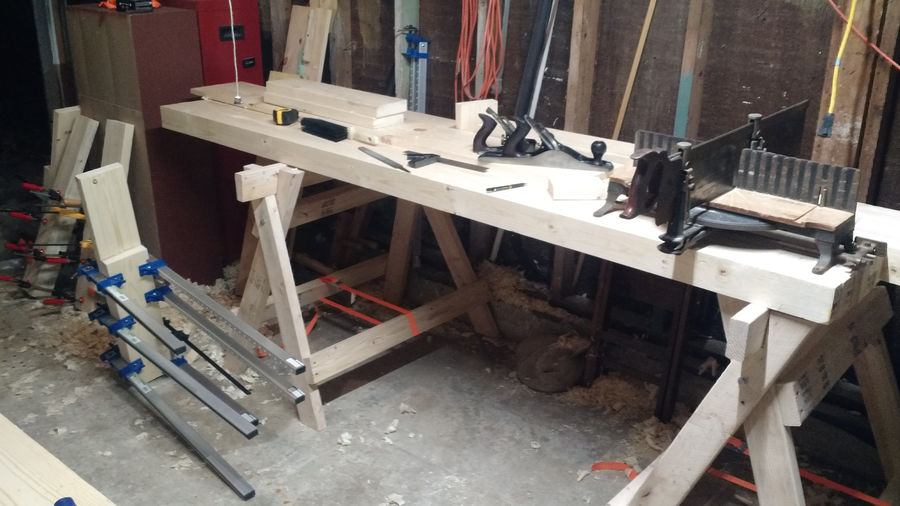 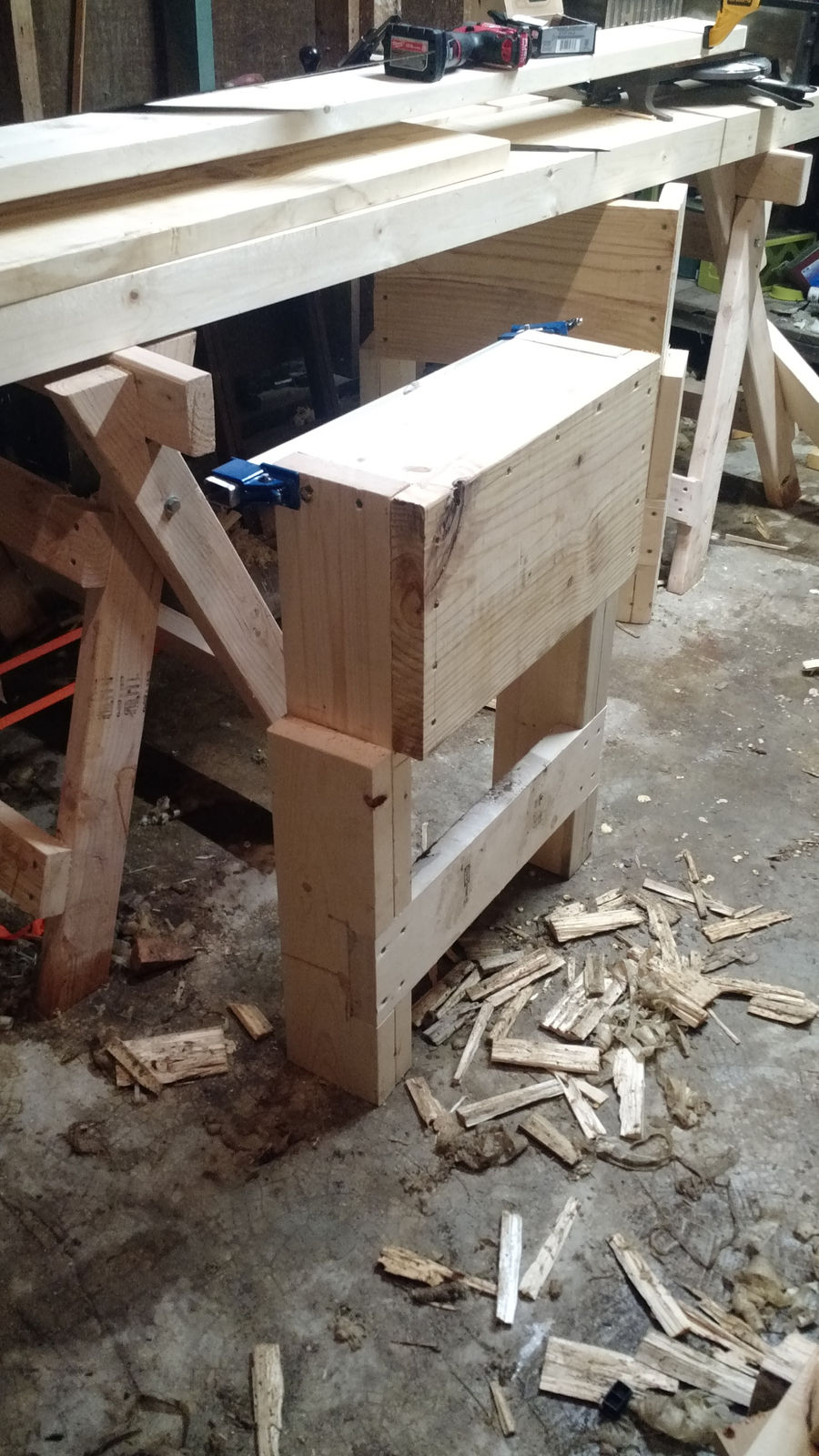 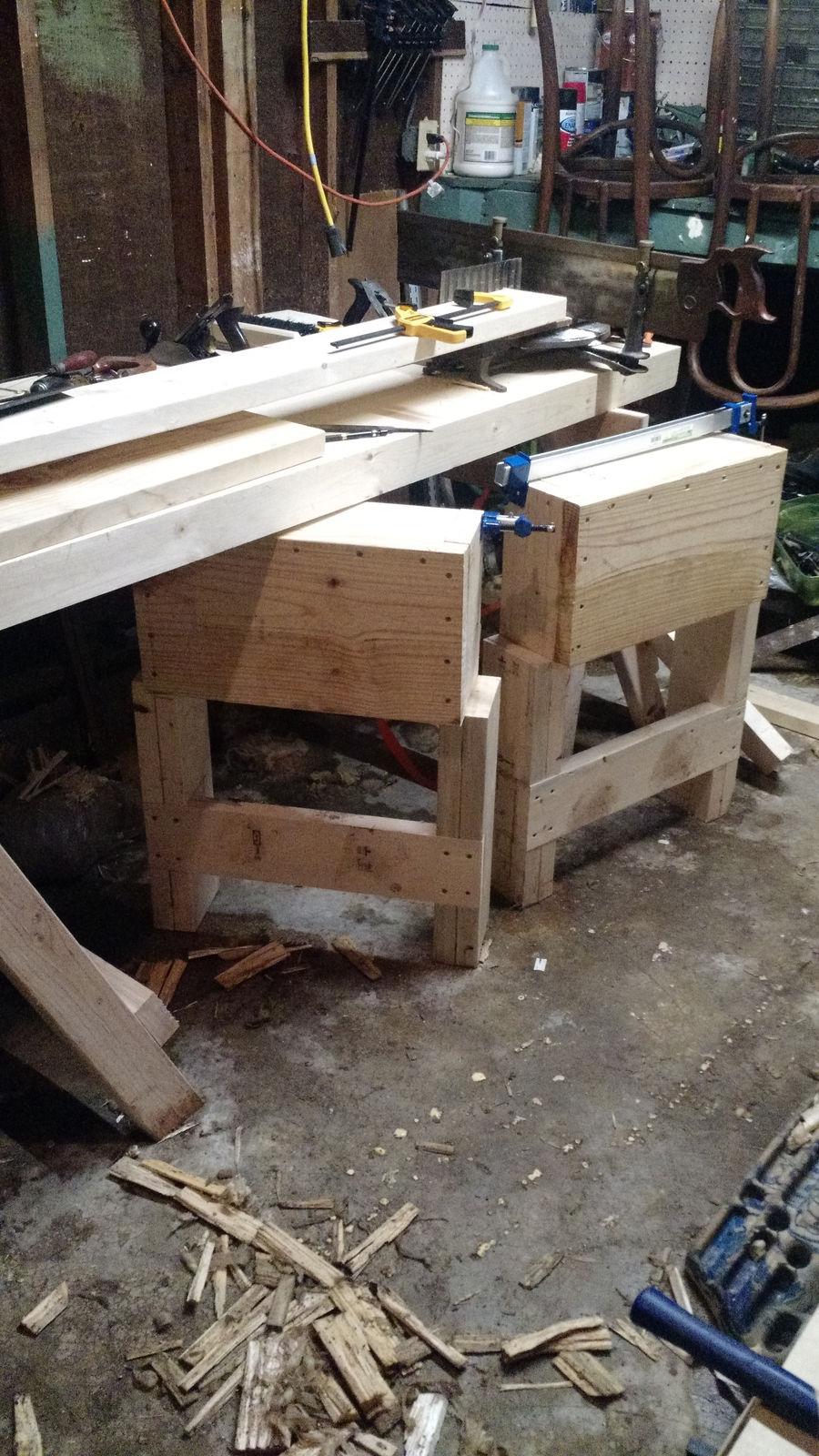 It was exciting working on the sawhorses because the top wasn't really springy, and entirely by luck, my saw horses came out to the exact height of my legs. 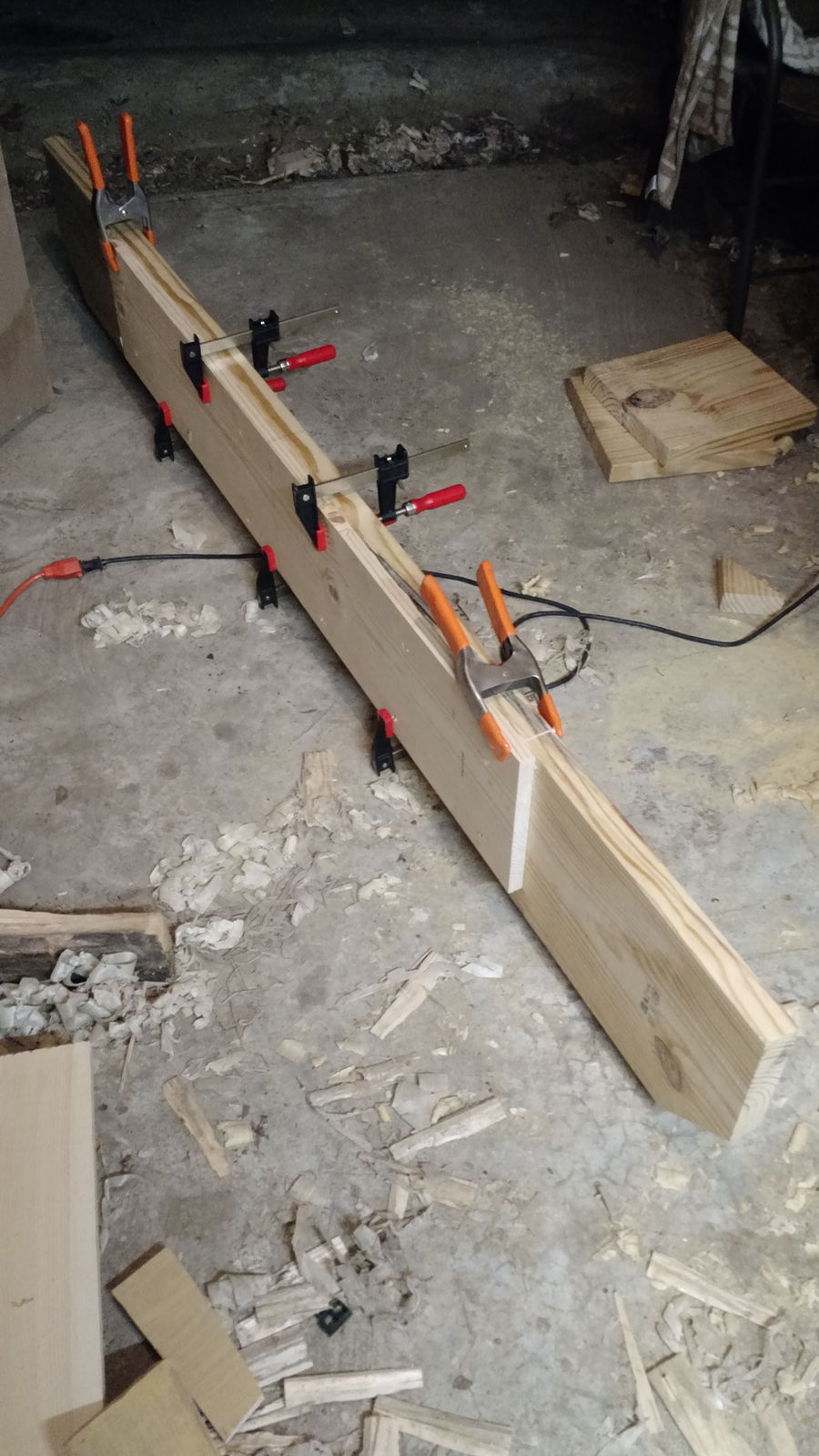 Glue and screw to backup the apron. 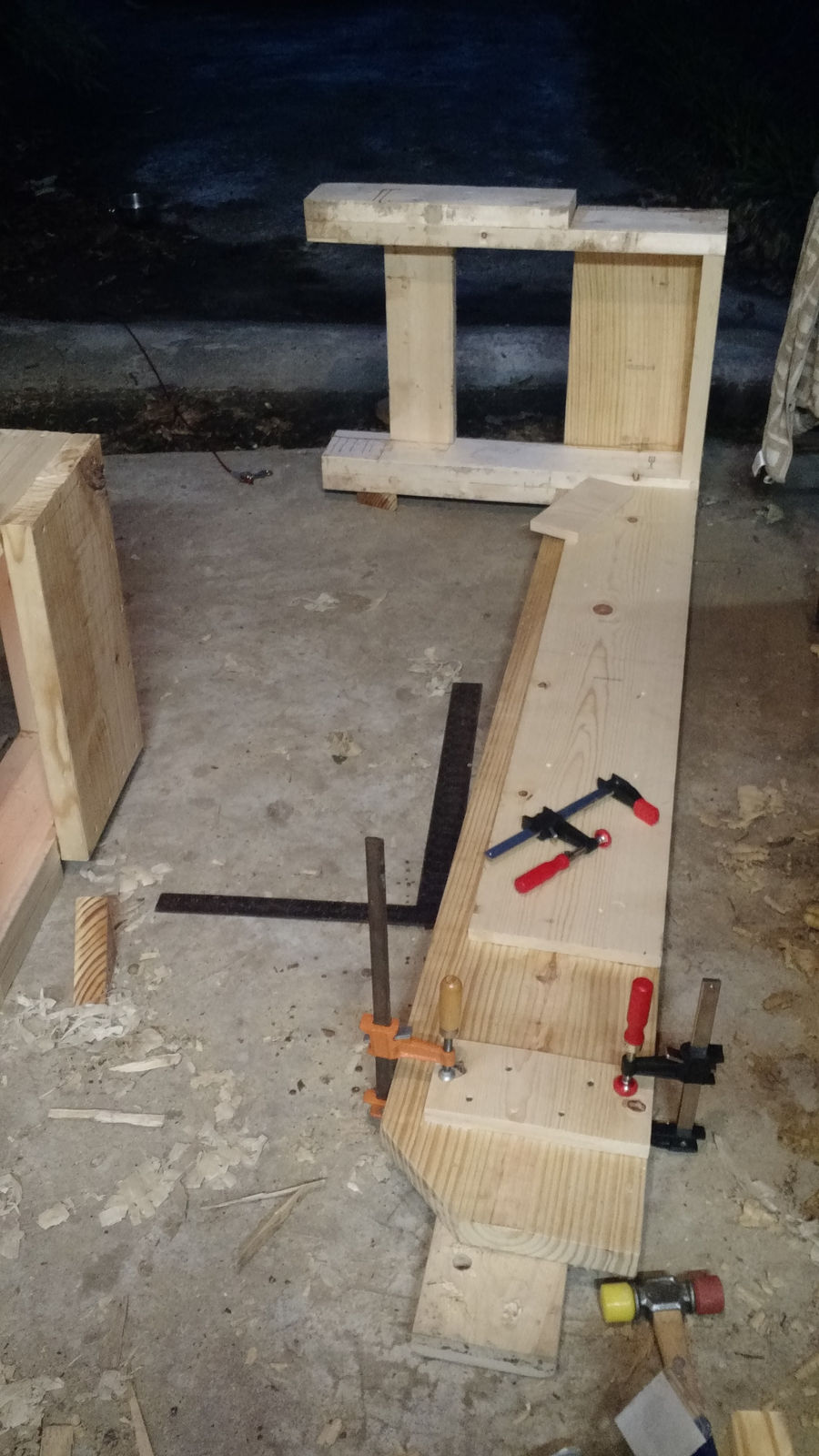 Fitting my aprons and legs together. Getting everything square here was difficult. 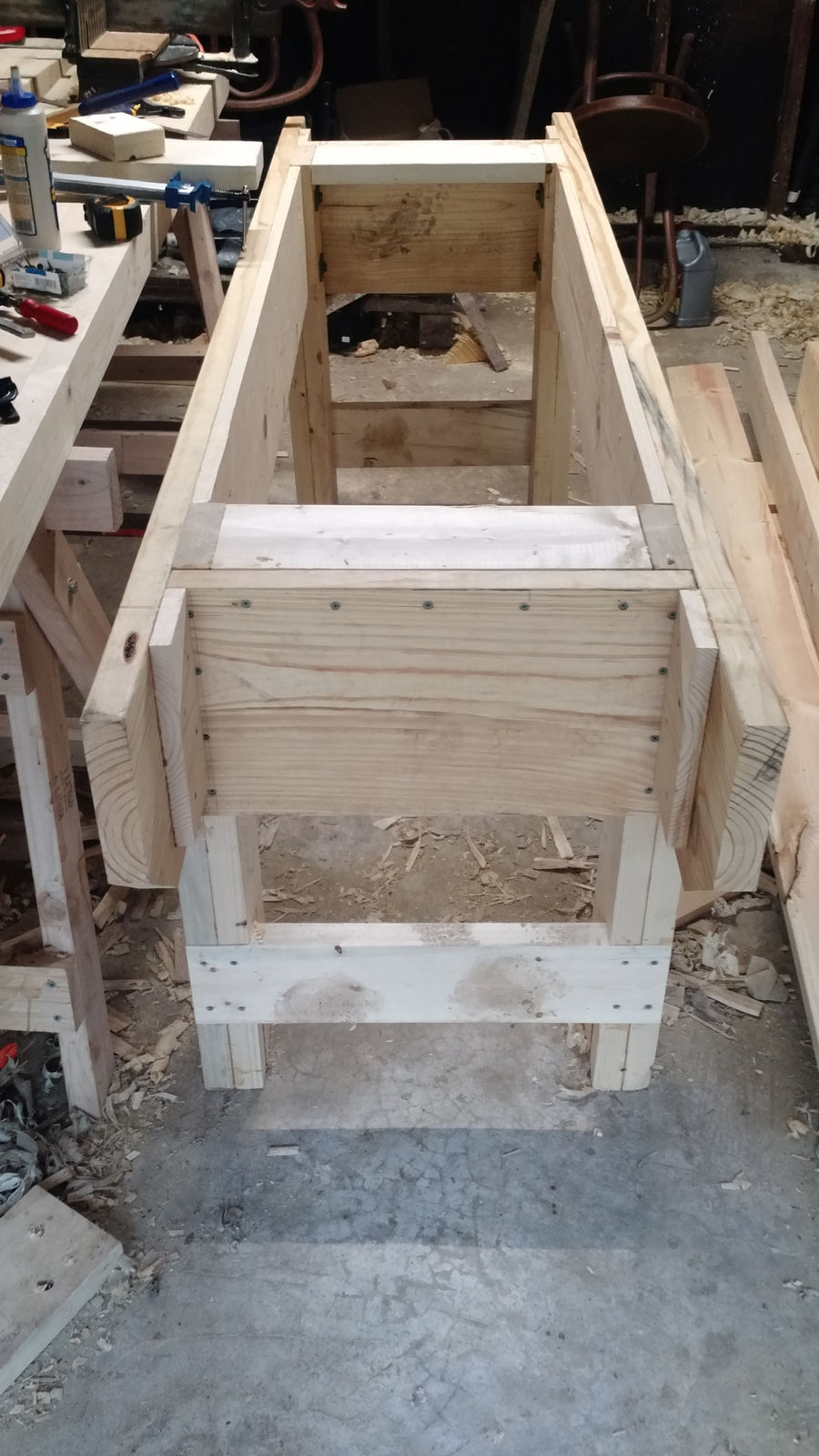 I got the bolt plates mounted and put the base together for the first time. I also checked diagonally for square, and was about 1/16" off...not bad. But it wasn't done moving, and probably never will be. 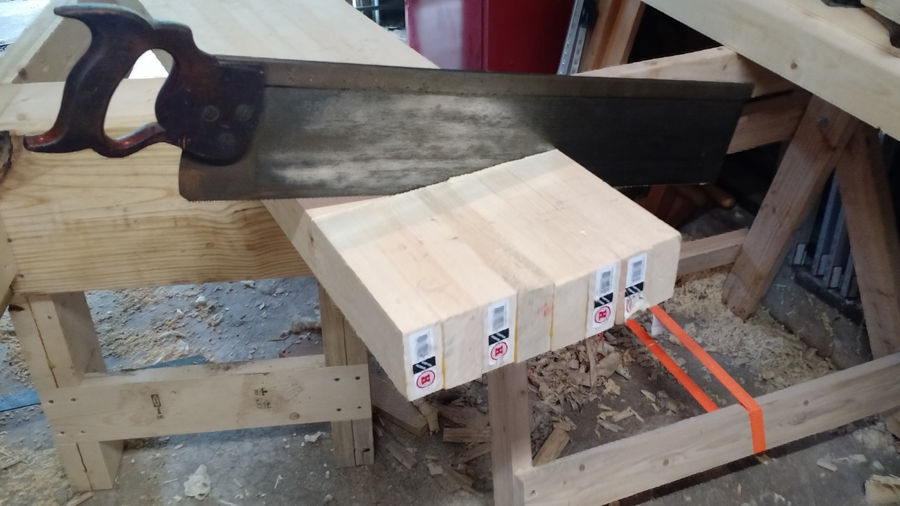 This was fun. The panel saws kind of suck (really, they were just dull and I sucked at sawing), but this bad boy great. Still used a lot of techniques in the PS bench build videos for much of the build. 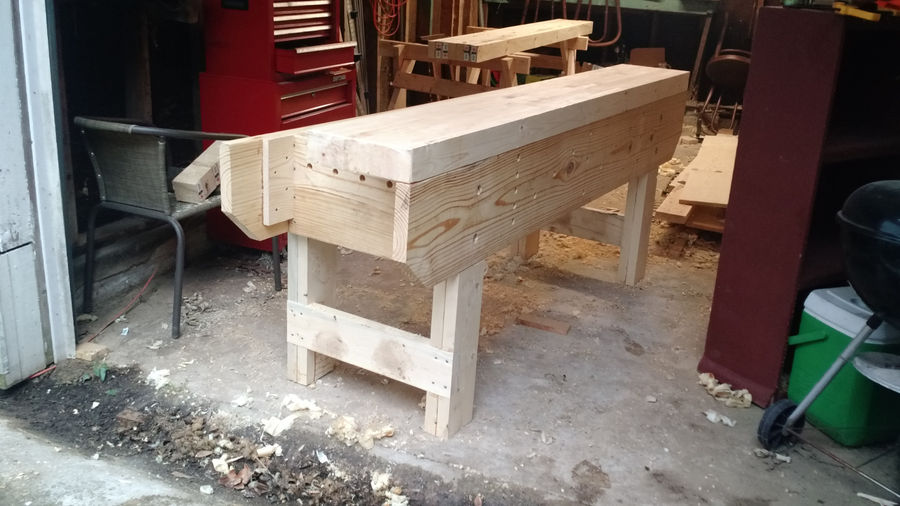 Starting to feel complete, but there was so much more to do. Was mega nervous about fitting the leg vise, even though it was so simple. 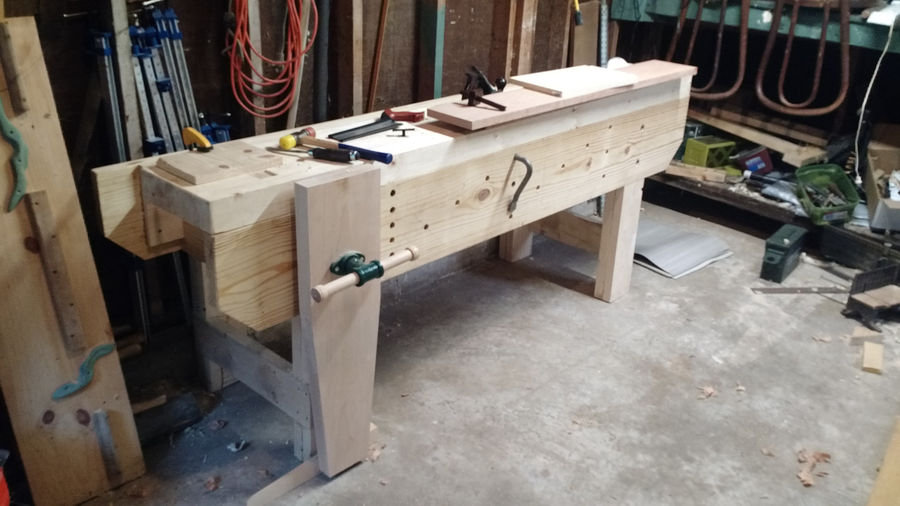 Skipped a whole ton of steps here, but one top got secured and the leg vise got put on...I wanted to make something else. It stayed like this for a few months, actually. It worked quite well, especially after I got the shelf on the bottom. I would still like to add a bushing somehow to the front of the vise screw opening, as well as a pinboard to balance it better. I've been using a maple wedge to account for racking.

The 8/4 hard maple chop was an eye opener. Remember when I thought I was sharp before? Haha, yeah, no. 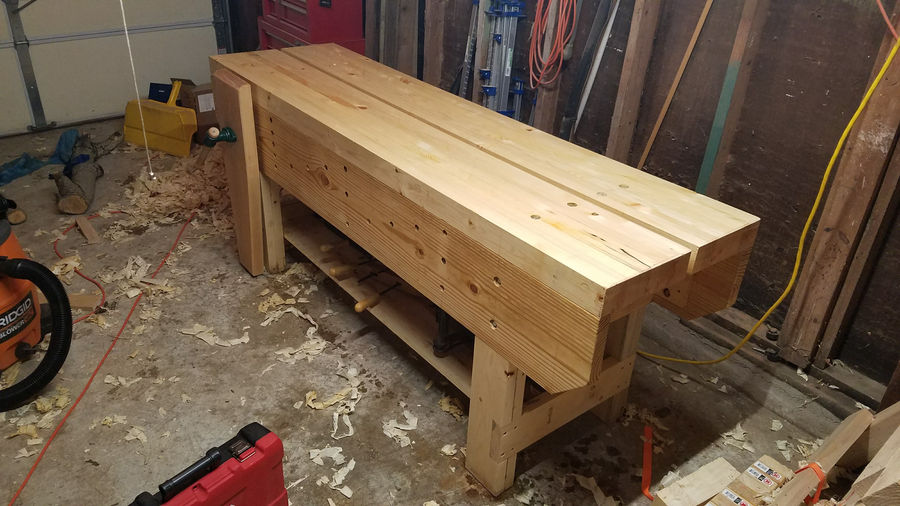 After a while, I wanted the rest of my top. I got it cut to size, mounted, flattened the tops and bottoms (it still could be a bit better, maybe), and made the chop a little nicer. I hit the whole thing with a coat of 50/50 mineral spirits and BLO. I also added a few more dogholes on the top after this shot was taken.

I like your bench and how beefy it is. Can't wait to build my own.

What vise hardware did you use?

The vise screw is the Lee Valley Tail Vise screw, I think. Definitely looking to upgrade it with some rollers and a parallel guide soon. Thanks for looking!

I like your bench and how beefy it is. Can't wait to build my own.

What vise hardware did you use?

I built mine based on Paul Sellers design and if and when I get around to rebuilding another I'll have a bit more experience and not use the cheapo $29 Stanley piece of junk plane that is a gouging machine, but it is very solid and holds up very well. I did manage to flatten a few fingers learning to chop all the mortices and learned to keep the chisels nice and sharp after the fact..

It really took awhile to get used to the idea of using it for work instead of just admiring my handywork so now over a year later it actually looks like a workbench / junk collection station.

Now nothing in my shop even remotely resembles household furniture. It looks like a workshop.