This box turned out to be a lot of fun. I decided to go as traditional as possible according to the included plans. I didn't add the internal cubby because this will eventually get a tray that will sit in to hold my wife's sewing materials. 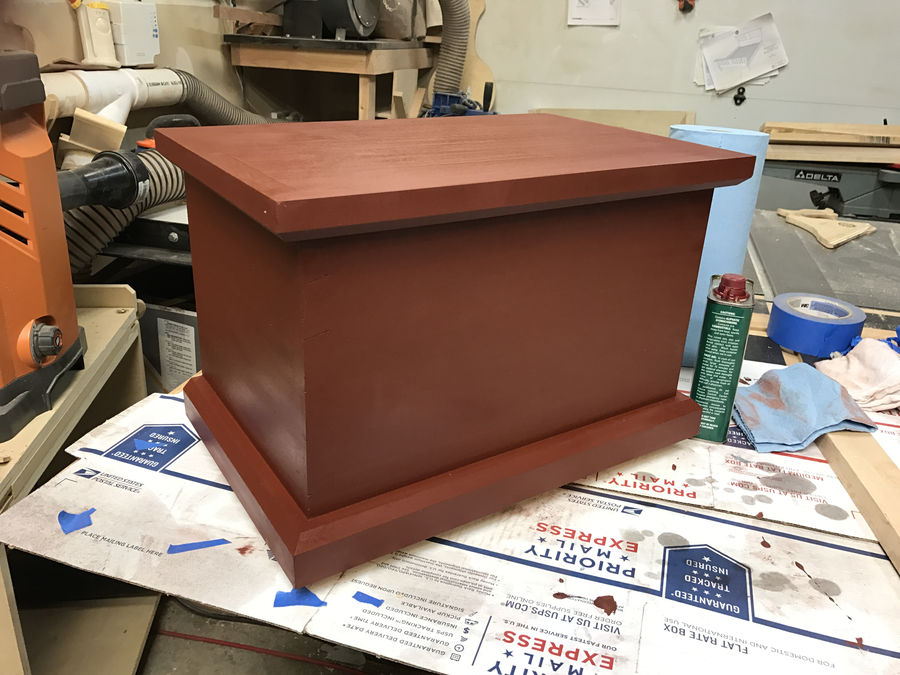 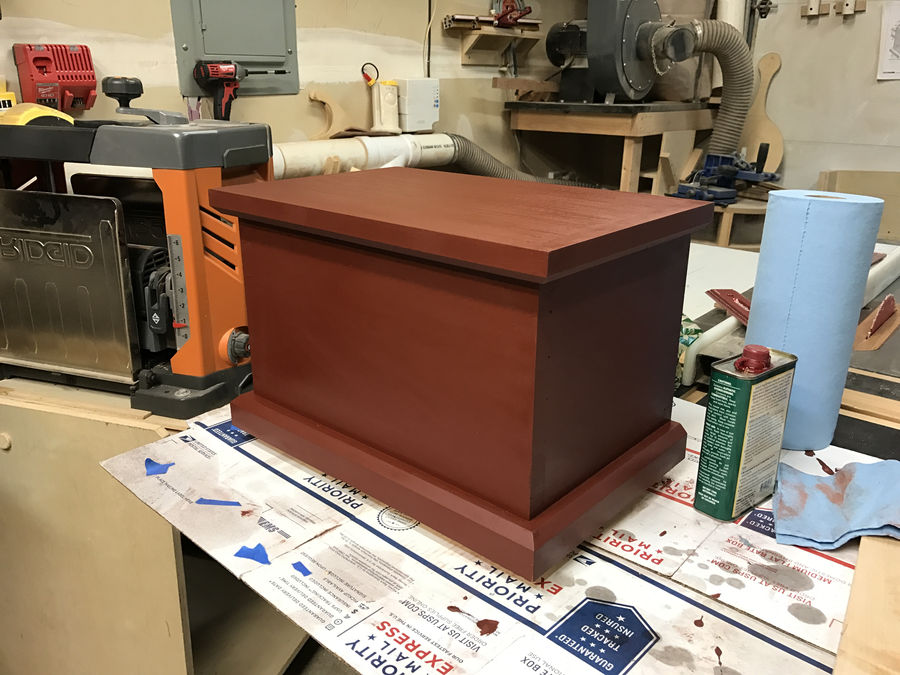 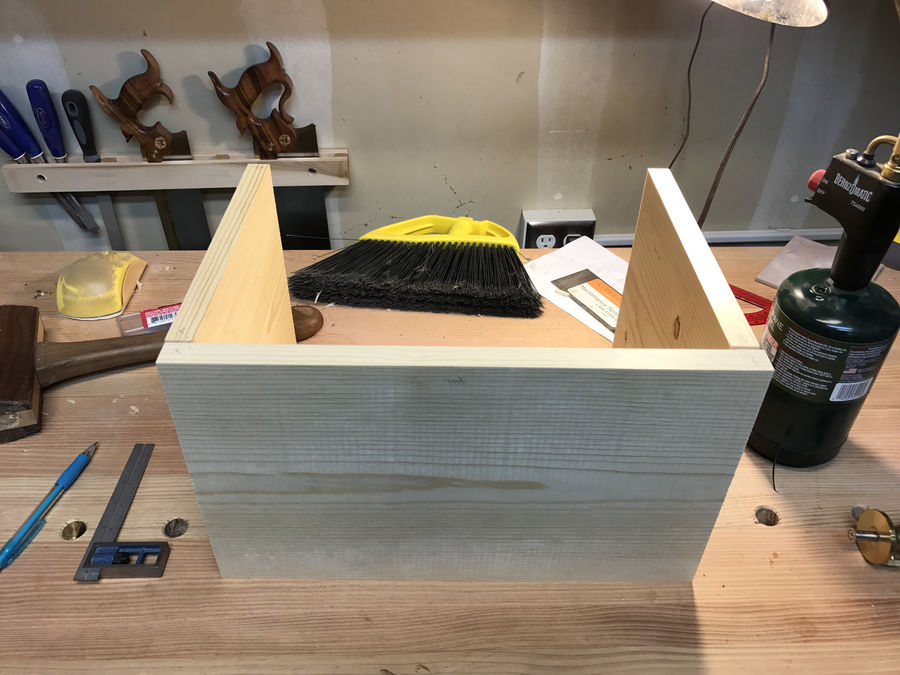 Since this was the first time I've ever done dovetails,  I wanted to make sure that I wouldn't mix things up when moving parts around. I marked each corner with a number and a pin or tail. 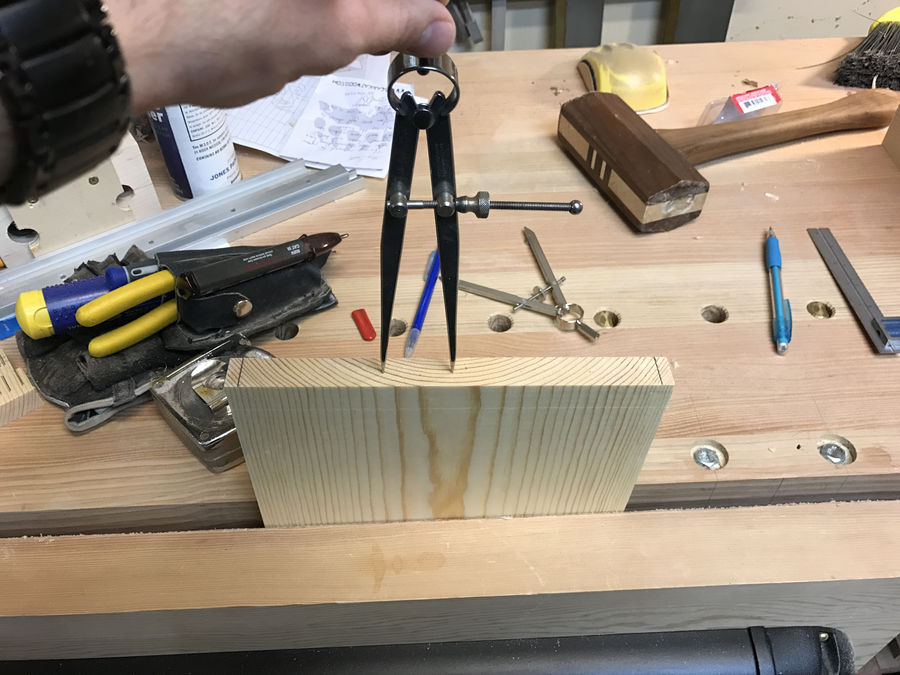 Walking off my tail spacing with a pair of dividers. Went with 6 per side. I think I'll go with some thinner pins next time. 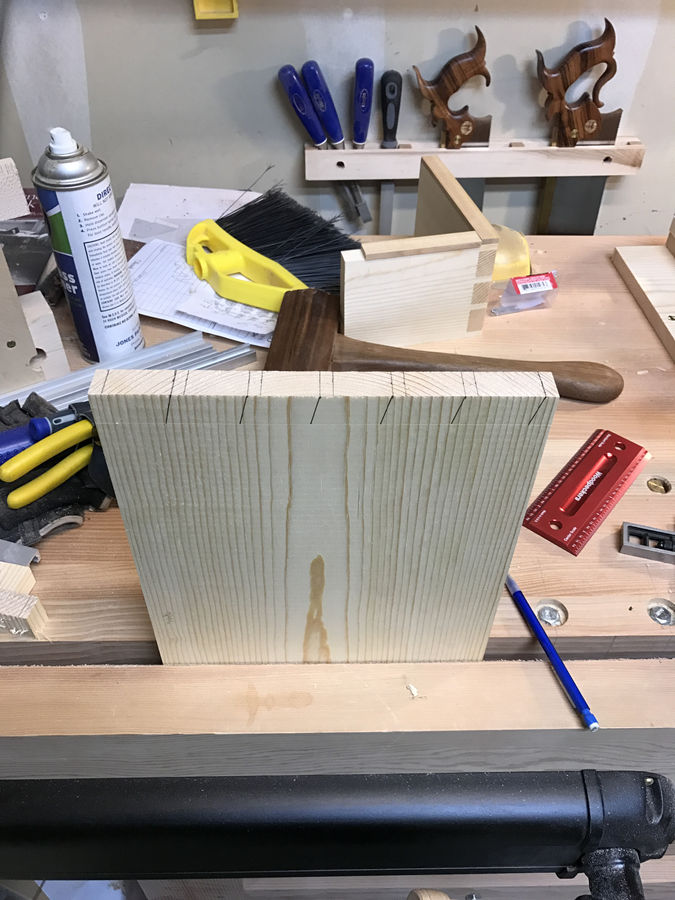 My sawing technique is a lot weaker when I saw left to right slant, so I just flip the board around to cut right to left slant. 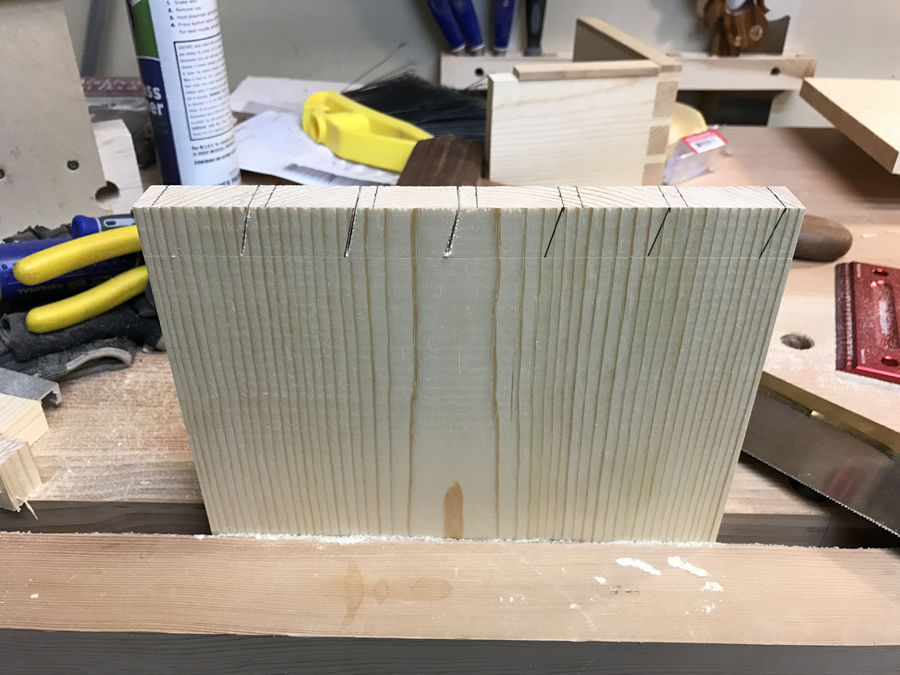 One side done, then flip and repeat. 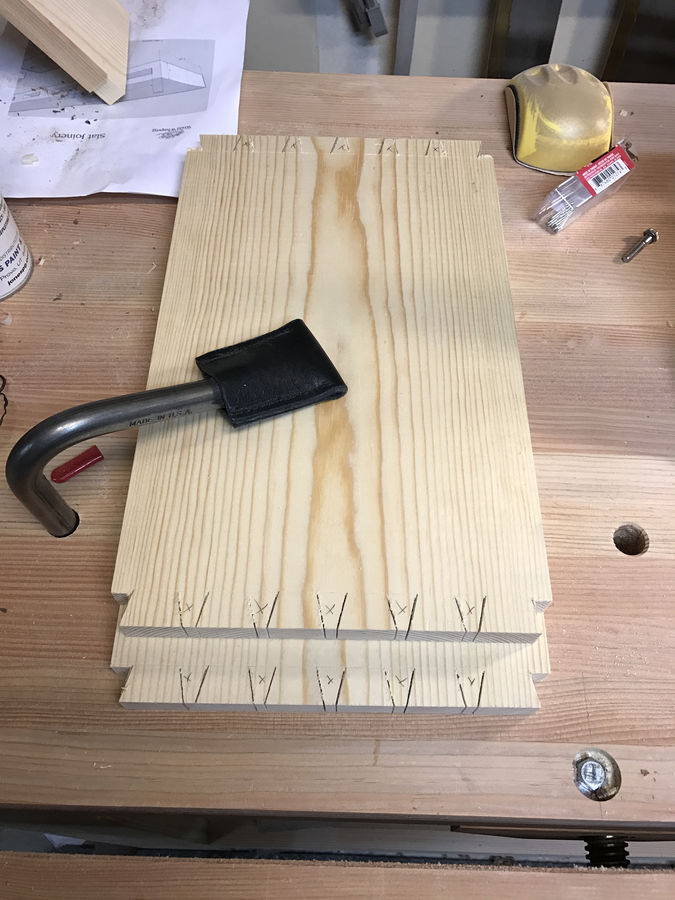 Ideally I'd have a fret saw to clear out the waste on these tails, but for the time being I'll use the chisels. 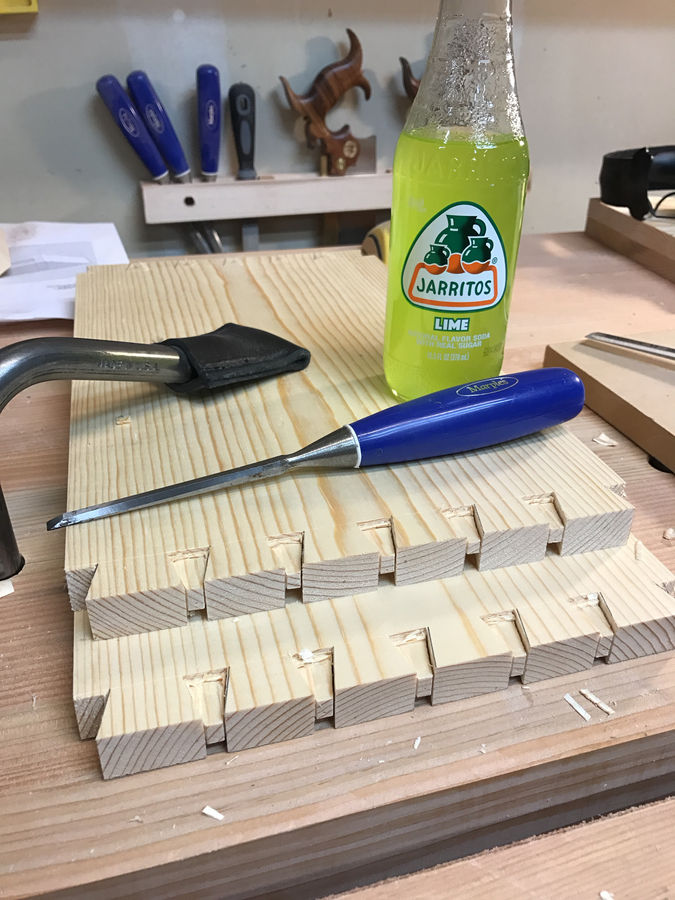 It was a slow process, but I made a night out of it. 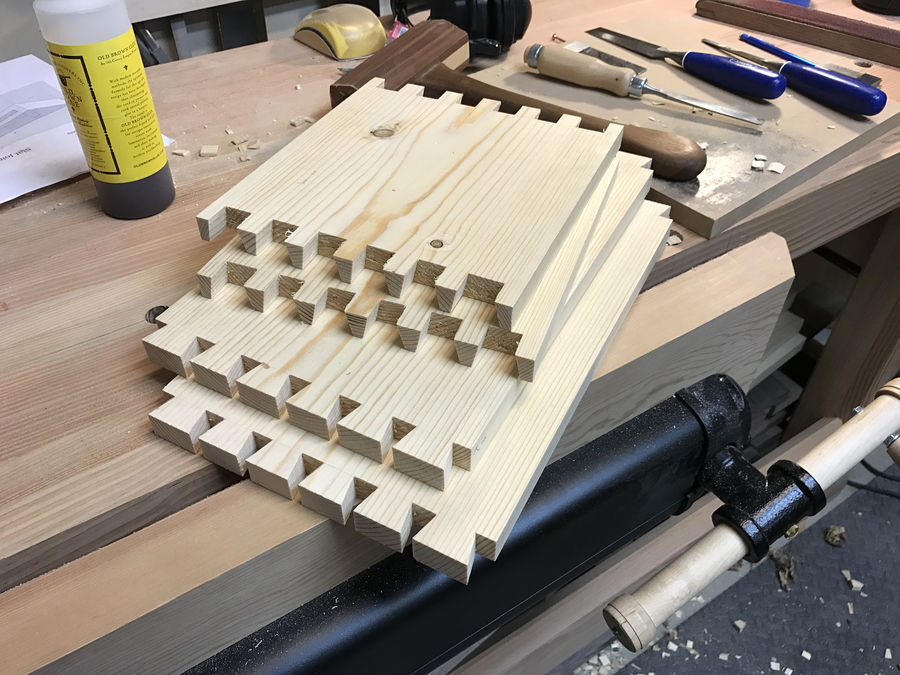 In an ideal world I would have trimmed some of these pins, to make the fit a little less snug. But I'm a foolhardy person and decided to throw caution to the wind and go ahead and pull this case together. 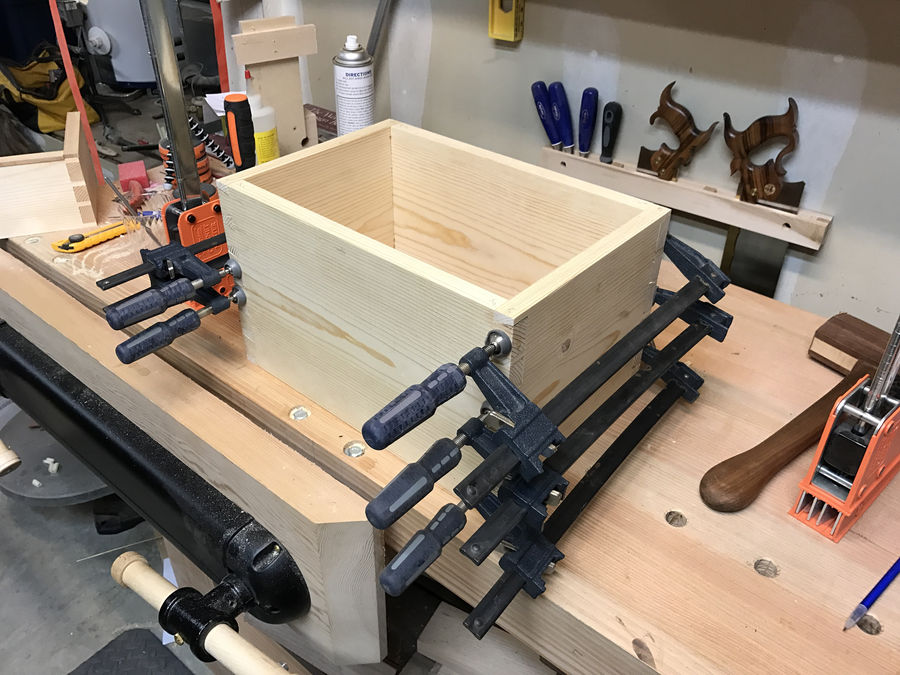 Glue up was STRESSFUL! The fit was tighter than I expected it to be. It took some serious persuasion with my mallet to get the joints to close up under the clamping pressure. 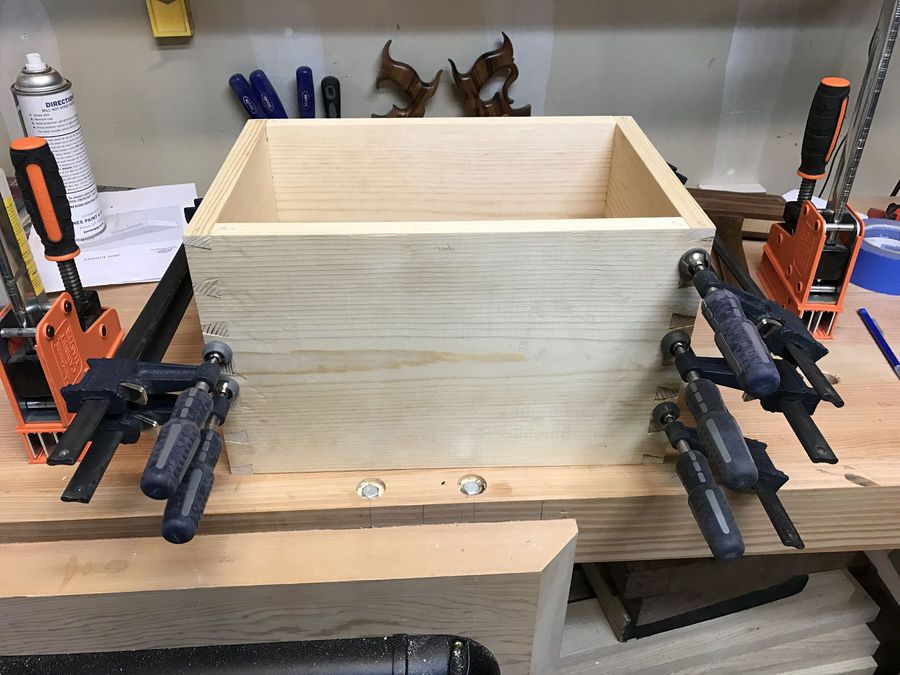 You can see the battle damage from the persuasion. 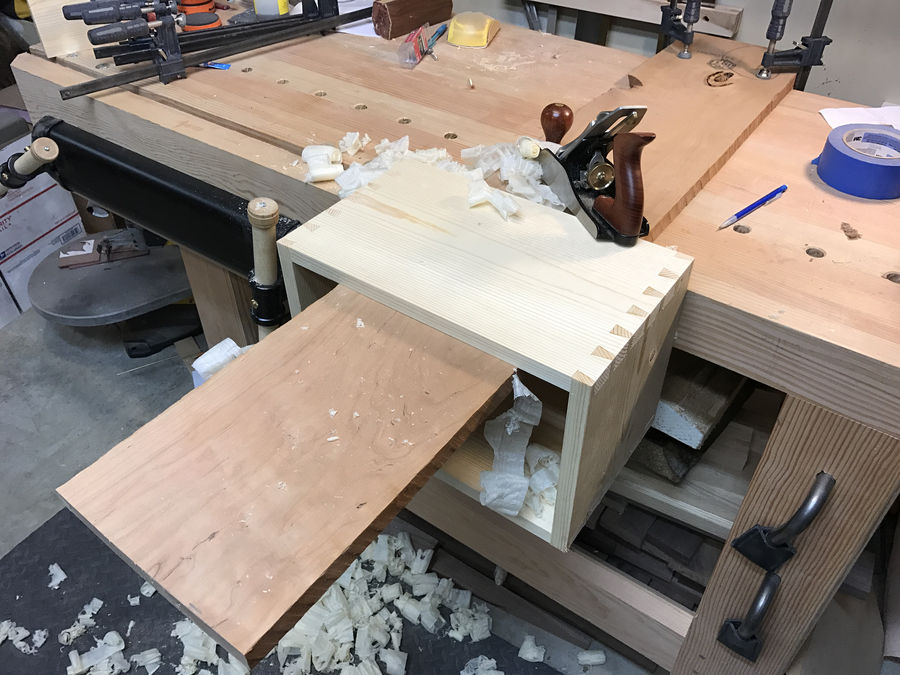 I've observed others use this technique to hold casework on the bench for planing. Worked out fairly well. 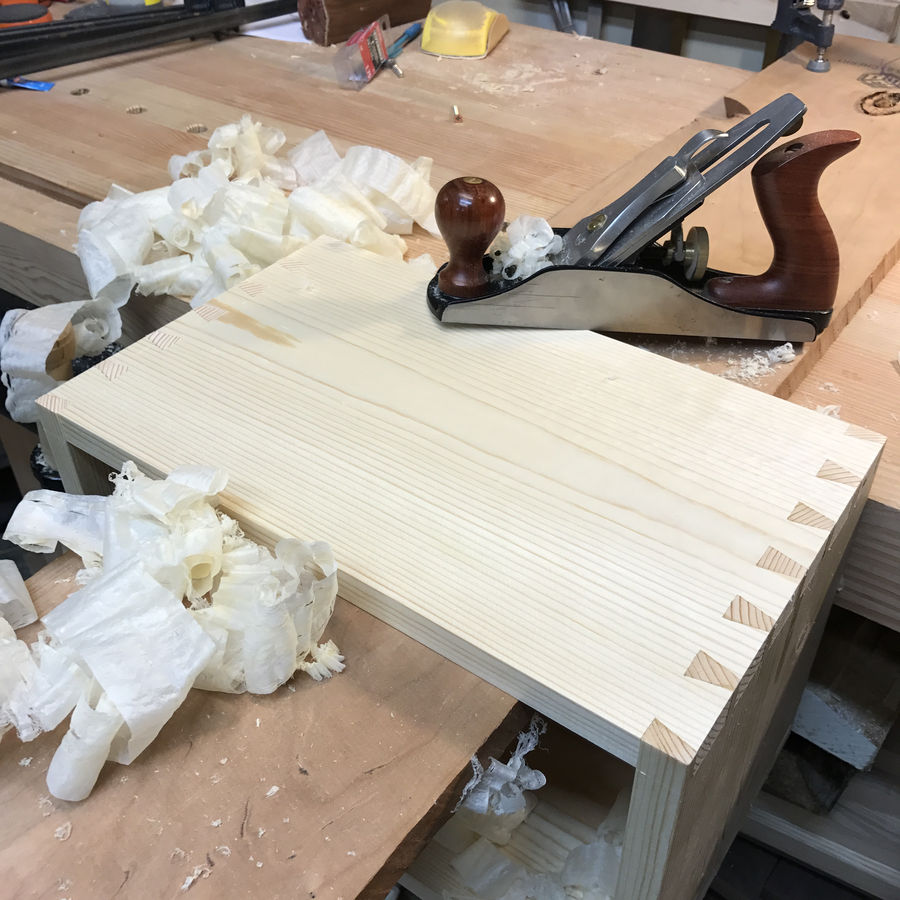 A few minutes later and these sides are looking more than adequate. I had some gaps in a few of the tails, but for my first try, this is fine. 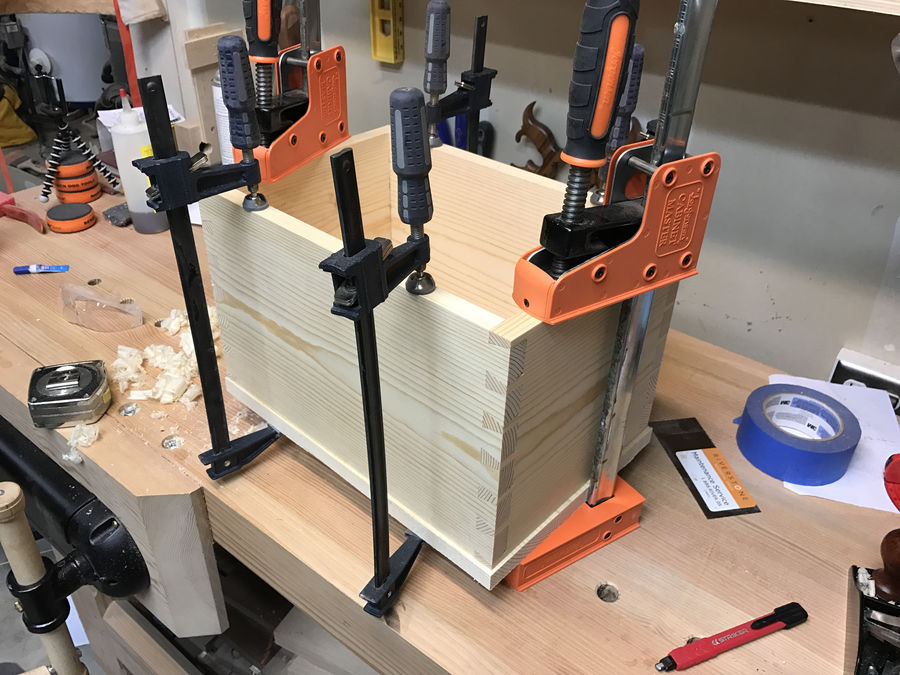 Bottom glued on, then nailed in place for reinforcement. 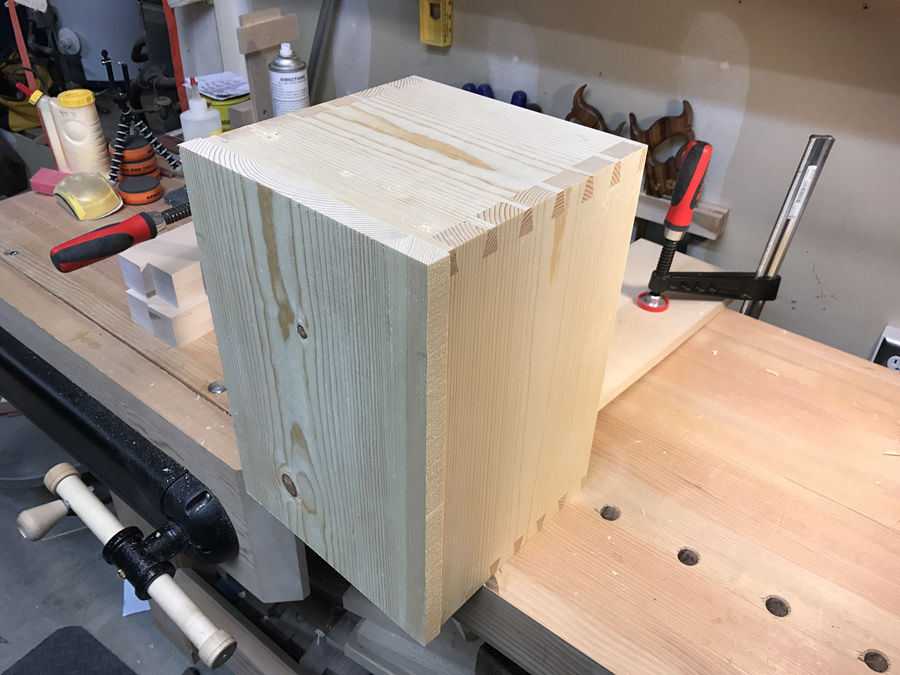 My low angle block plane helped a lot with the end grain trimming. 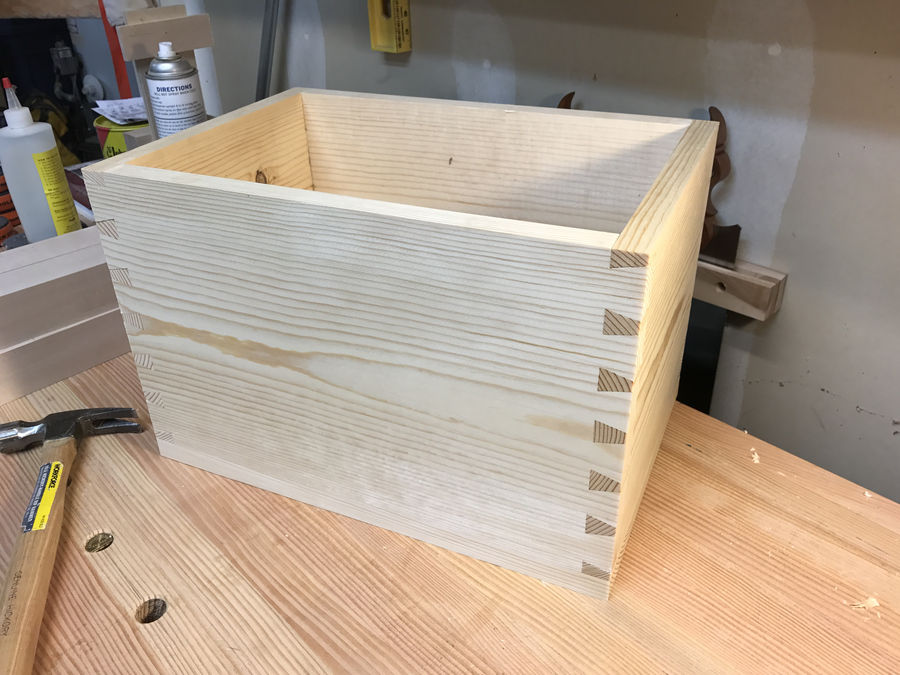 Planed flush. Kind of feels wrong not having the base in a dado. 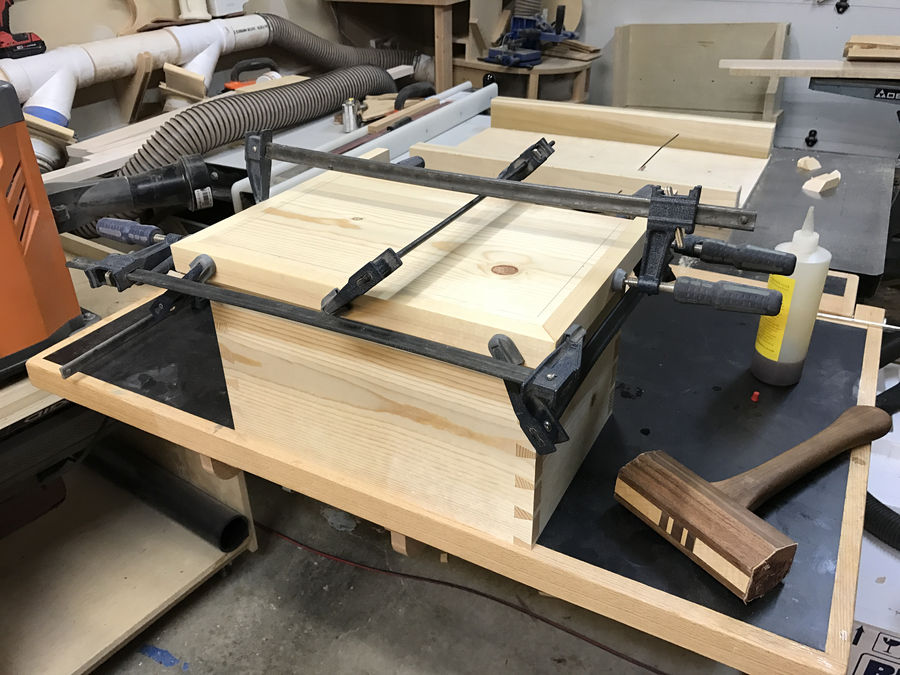 Base moldings were super simple after cutting them on my miter sled. I chose not to nail them on, mostly because I was lazy on v1.0 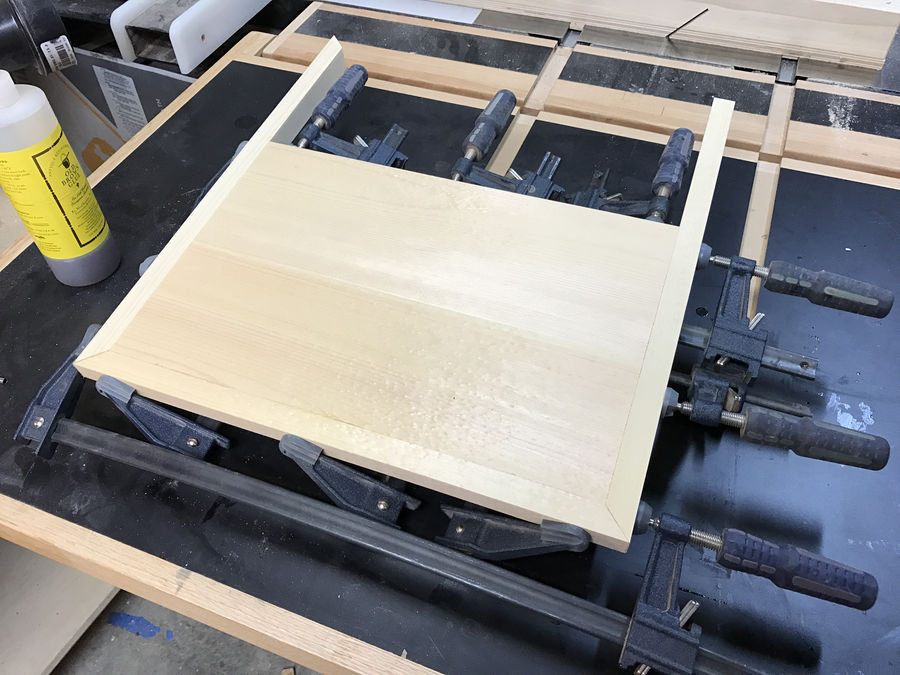 Top moldings glued up. The end is in sight! 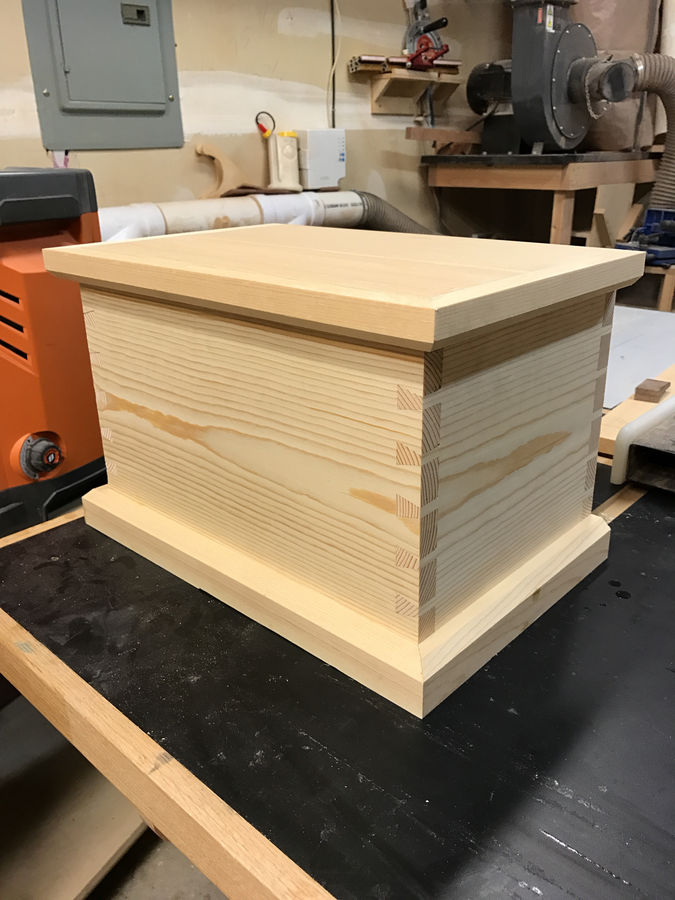 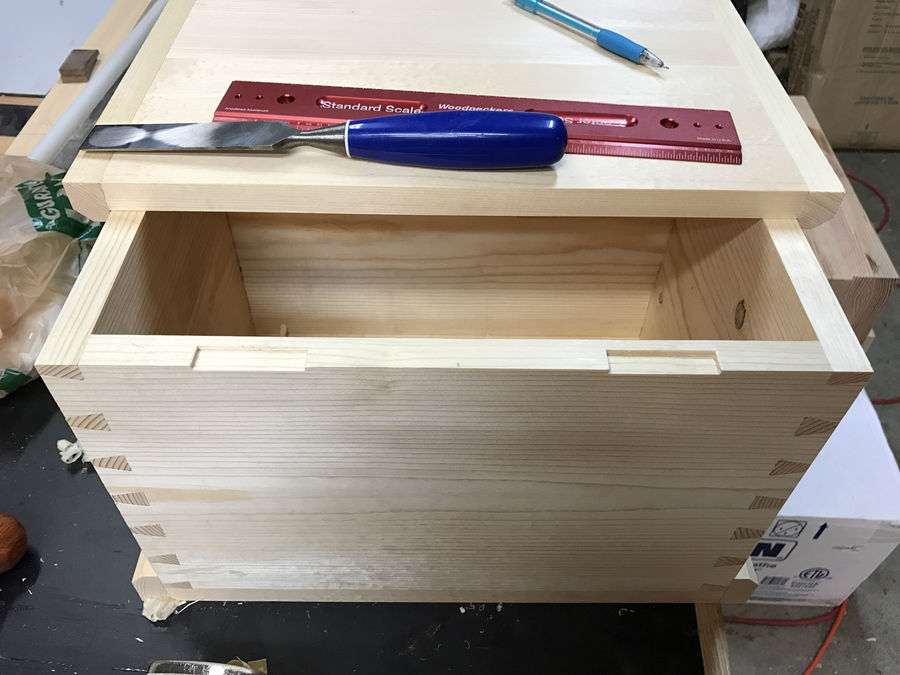 Hinge mortises 1 of 2 cut. Just need to transfer the locations to the lid. 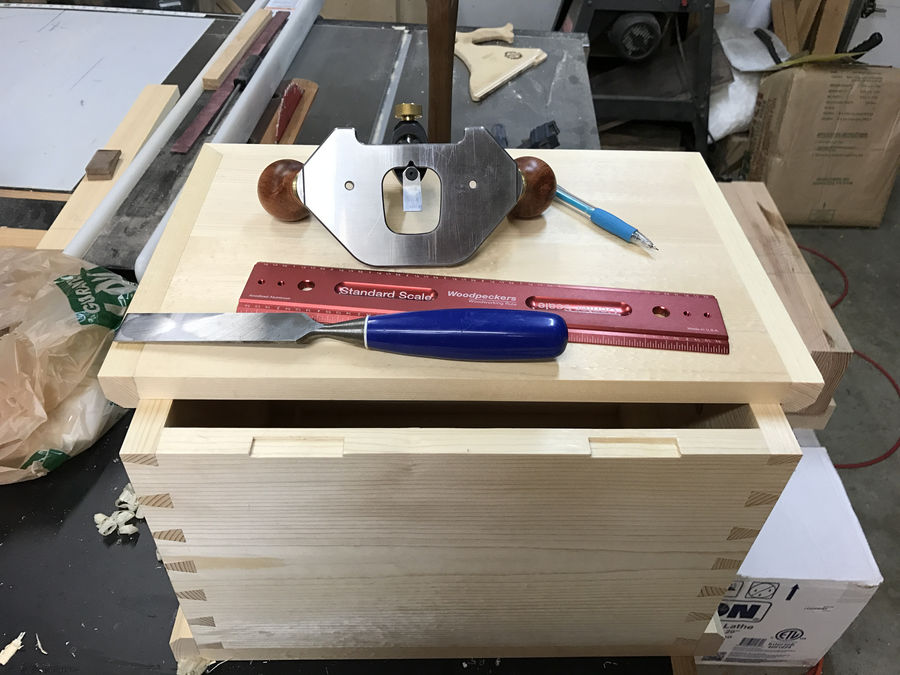 Router plane saved my butt on these hinge mortises. Was a great tool to have on hand. 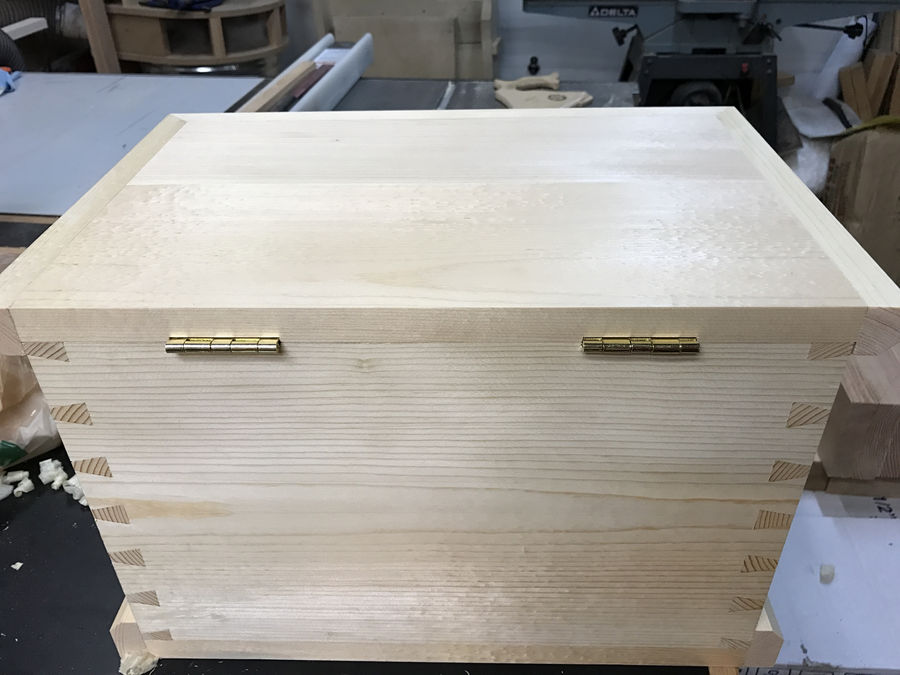 Hinges fit, even the ones from Home Depot. Brusso would have been a nice luxury if I could have afforded it. 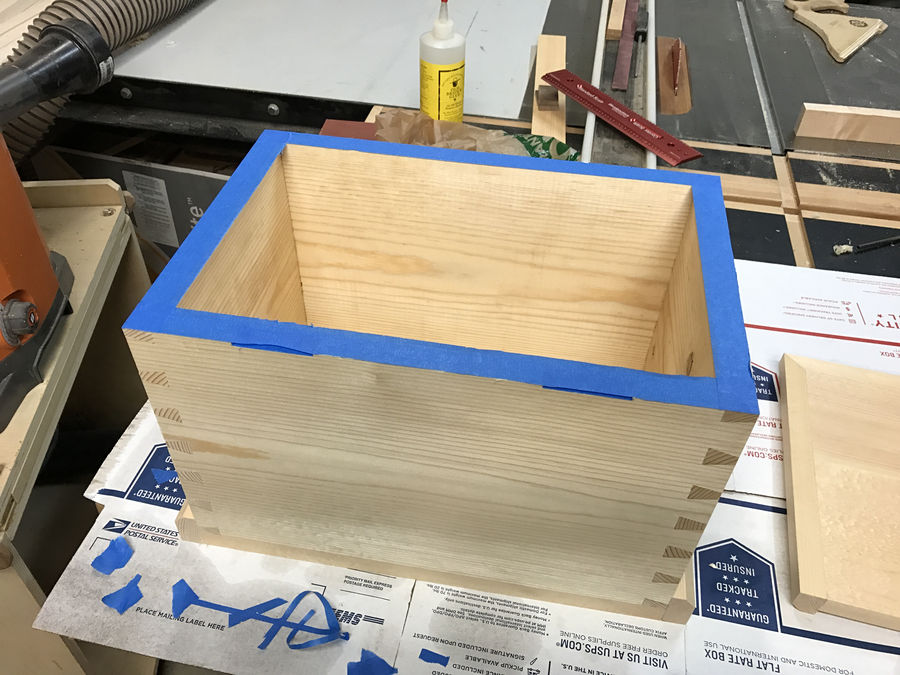 Masking off for painting, but I should have not bothered. I can just plane off any spill over when I'm done painting. 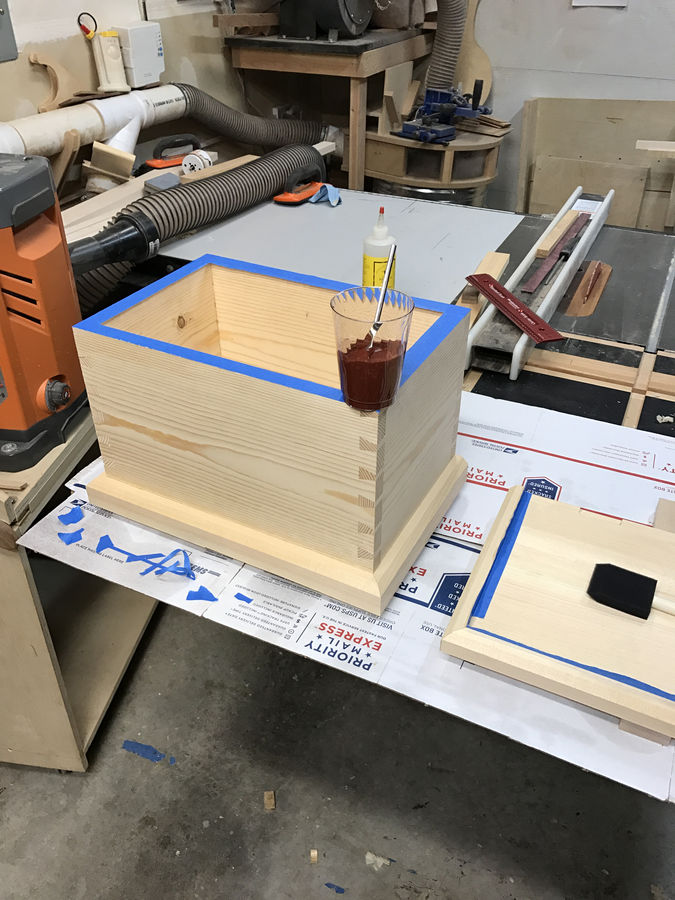 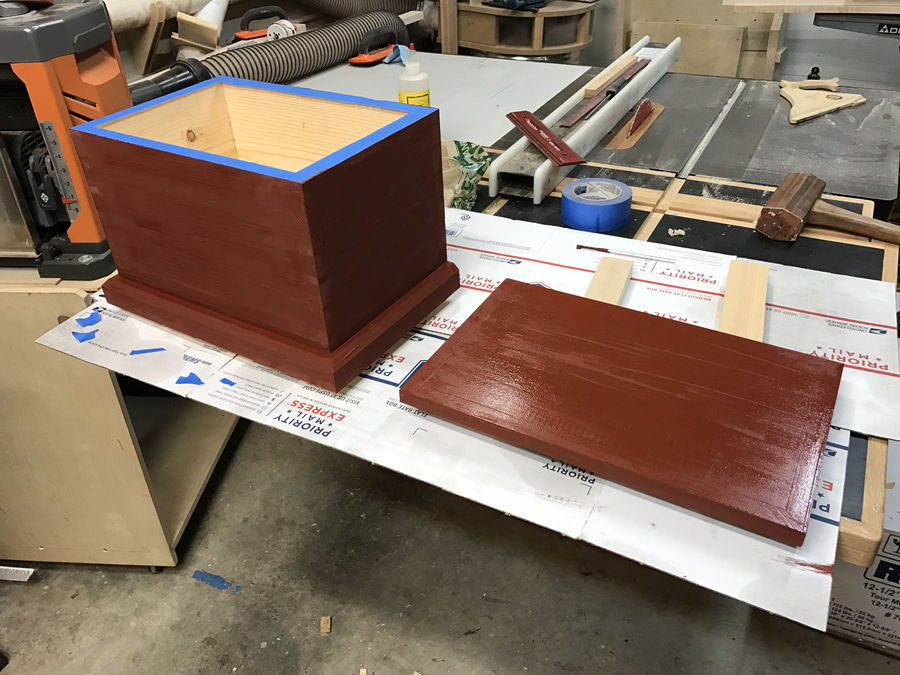 I wish the red was a little brighter, but my wife is more than happy with the barn red this ended up being. The box looks great!