This is the first of the boxes I've made for the 52 boxes competition.  I picked the afromosia because of its straight grain and accented it with a dark blue milk paint.  The walnut goes great with the afromosia, and I wanted to use end grain on the pulls for added interest.  Honestly I like it but I'm not over the moon.  I got the miters tight but there are tiny gaps around the end grain walnut pulls that I can't not see.  Tiny gaps stand out on tiny boxes like a MF.  Otherwise I love it and I'm starting to see the allure of making tiny boxes. 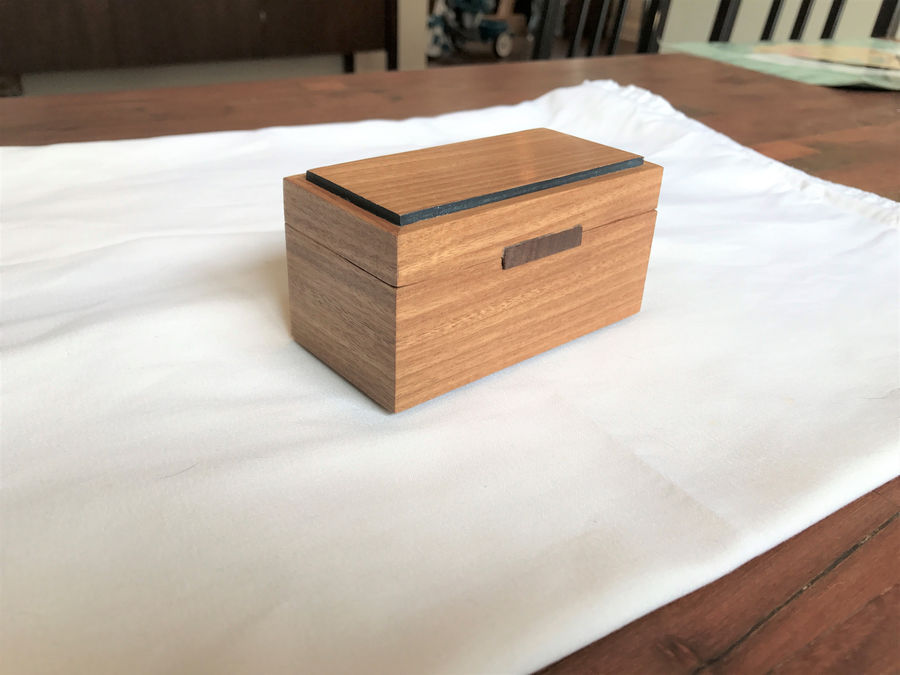 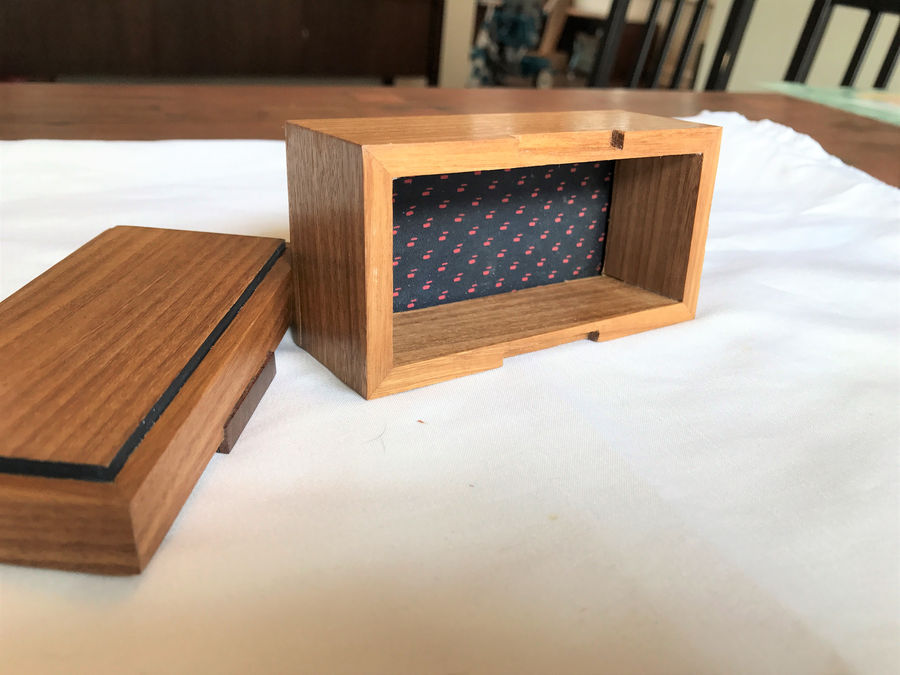 Fabric is from a tie I loved but was like 2 inches too short so I never wore it.  Once every month or two I'd try to put it on - "This is a great tie, why don't I ever wear it?" - but then the little tail was too short to tuck into the loop on the back and it would bug the shit out of me, and I would wind up putting on another tie.  Little guy does me proud in the bottom of the box though. 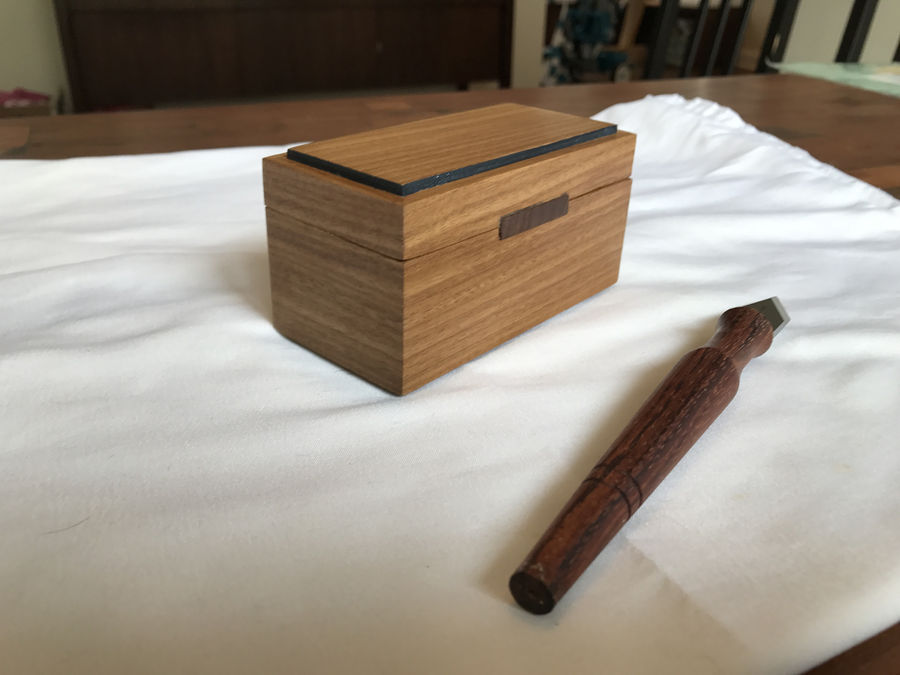 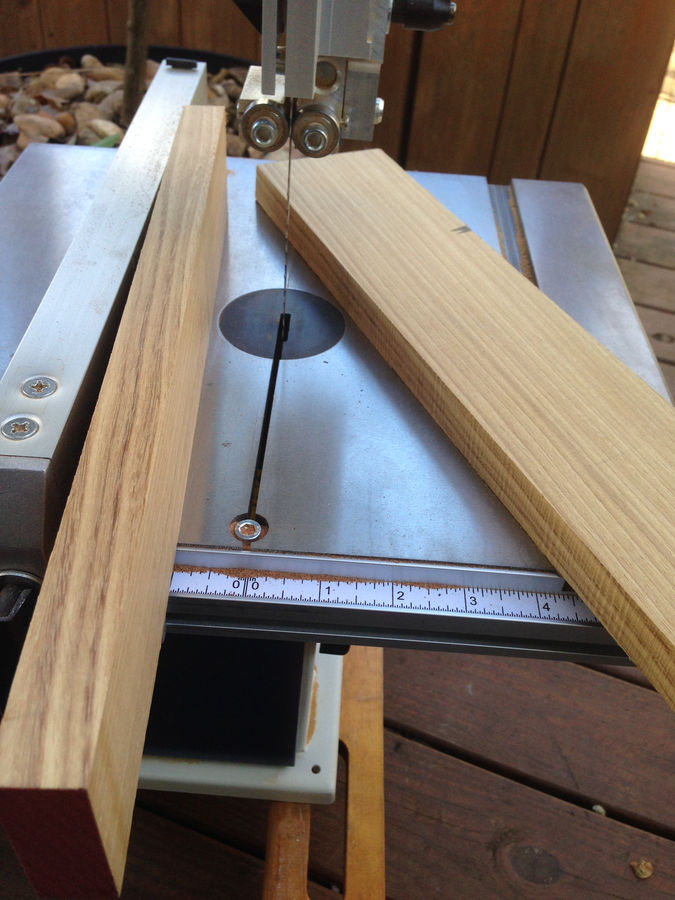 Cutting the afromosia to width (not pictured: resawing) 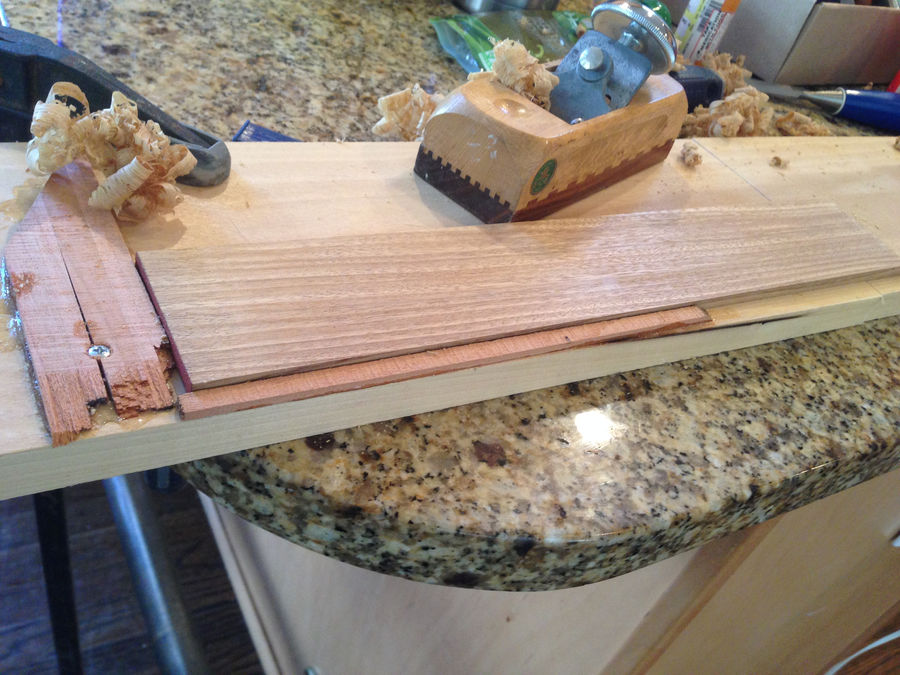 Surface prep.  Don't worry, since this photo I've taken the screw out of the plane stop. 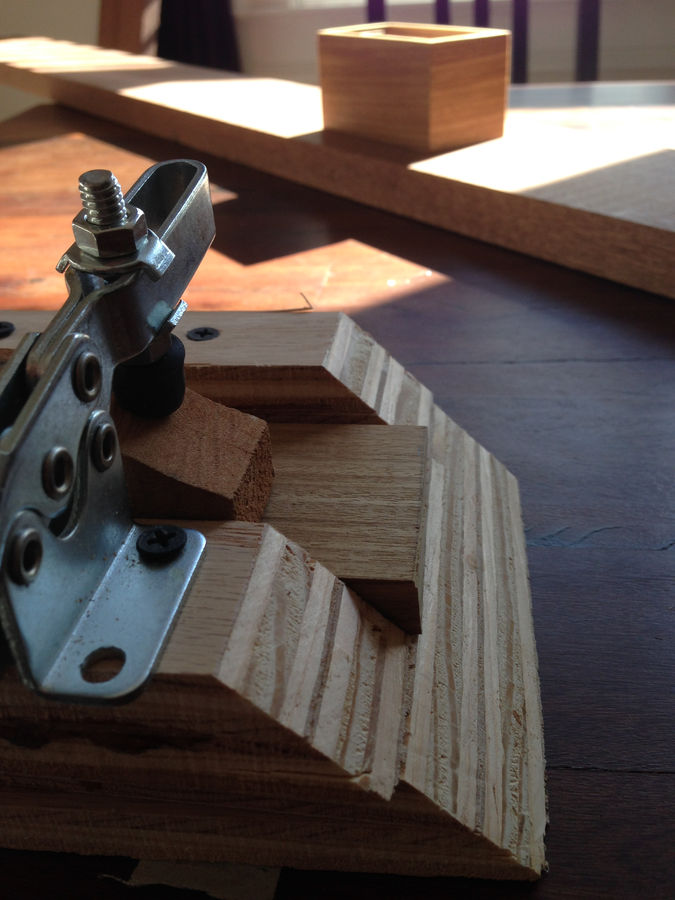 My first miter shooting board - used with a block plane.  Worked ok but was only like 99% square so I had to make another. 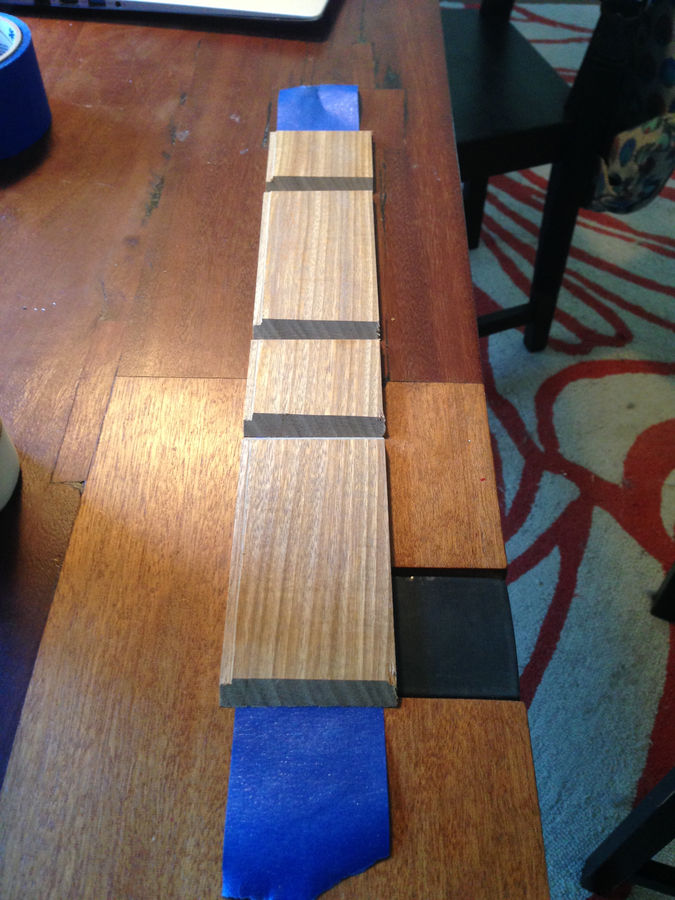 Blue tape glue-up.  You may notice the lack of rabbet on one end of the box.  That's because this was originally going to be box 25.  After glue-up, however, I realized I wasn't 100% square so there was no way to make a second box to fit perfectly into this box.  I was pretty pissed for a while but then figured I could reconfigure into box 37. 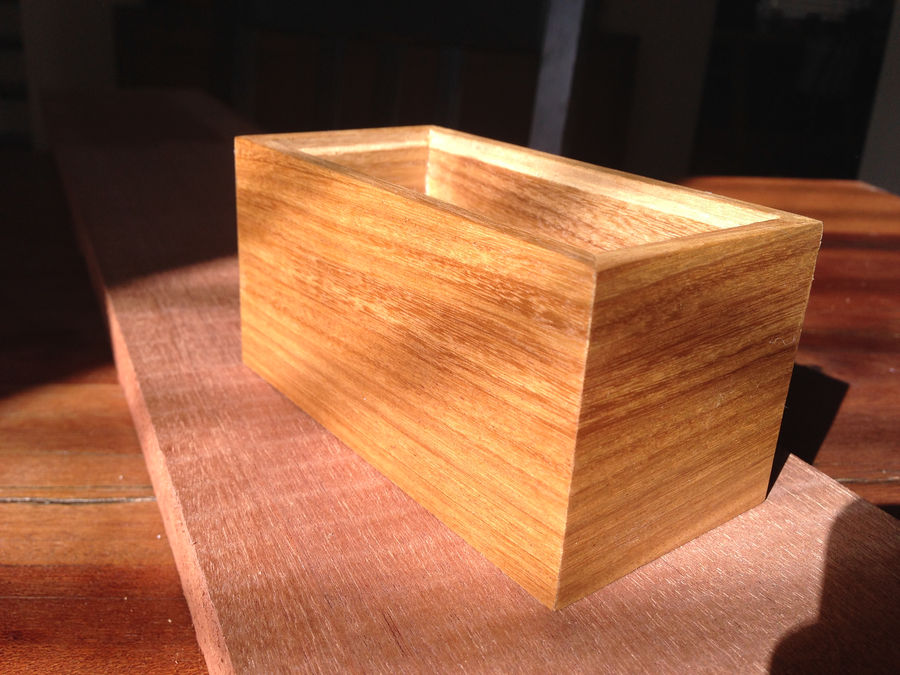 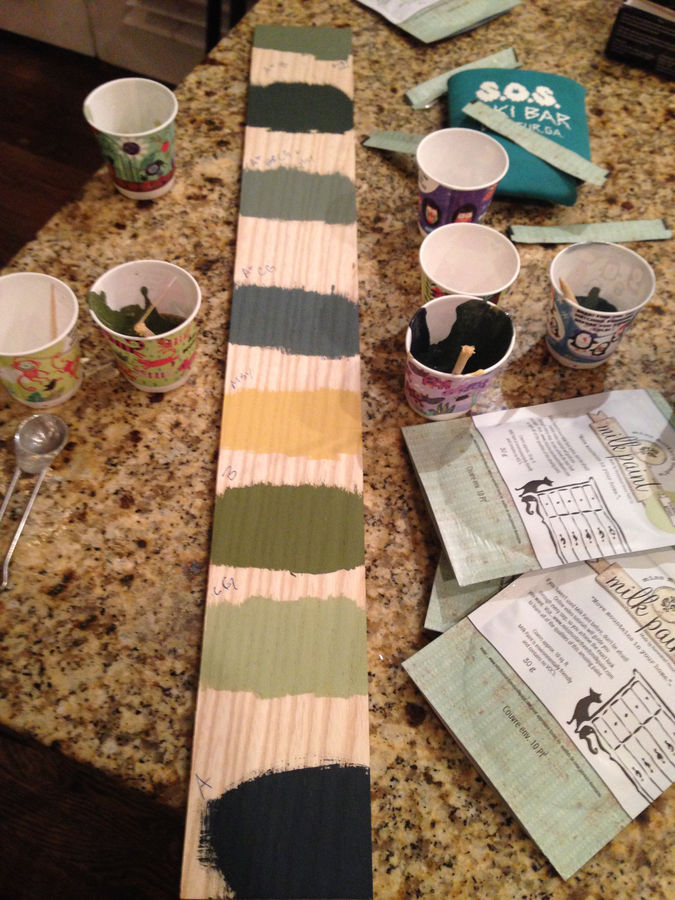 I bought 4 colors of milk paint - this is different colors and different mixes of colors.  I went with the darkest blue. 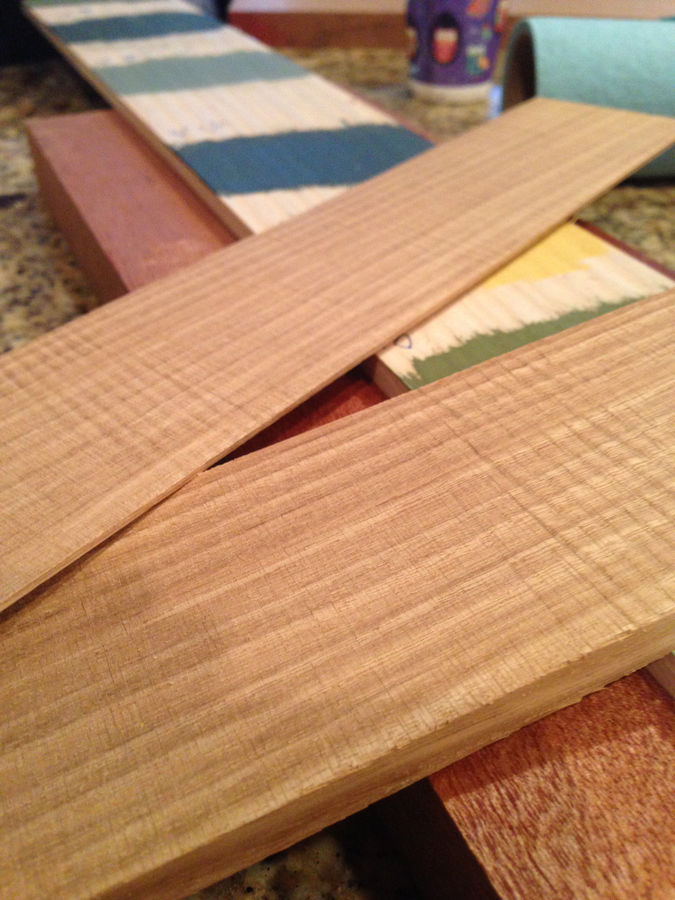 Resawing veneer.  My first time trying veneer.  It's not as daunting as I'd feared - at least not on a project this small. 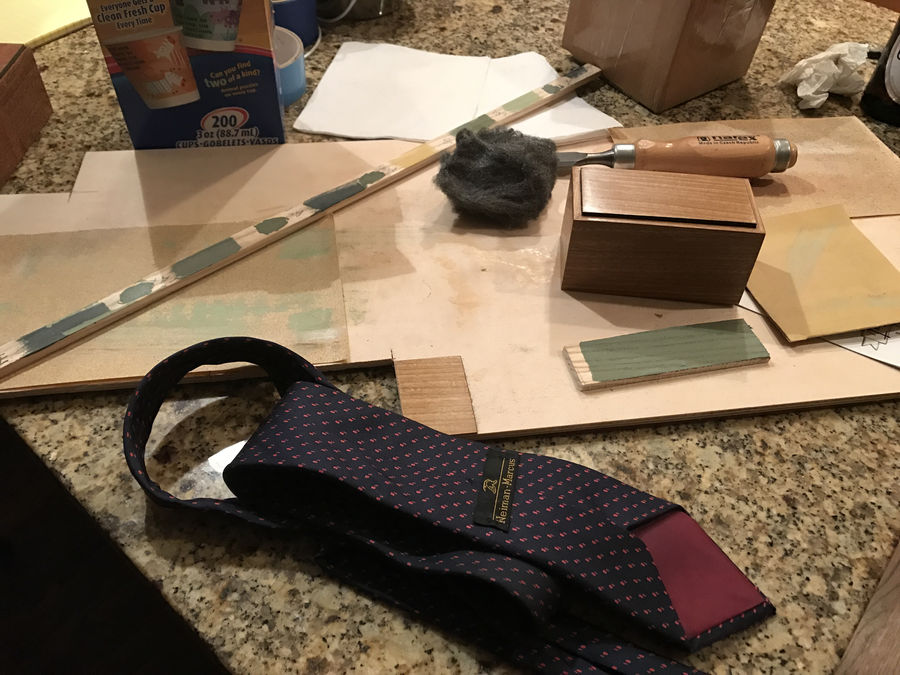 Aforementioned tie.  It's a fancy label but I got it for $3 at a thrift store.  Also you can see the completed box body.  You can also see where I cut out the veneered top from the 1/4" ply. 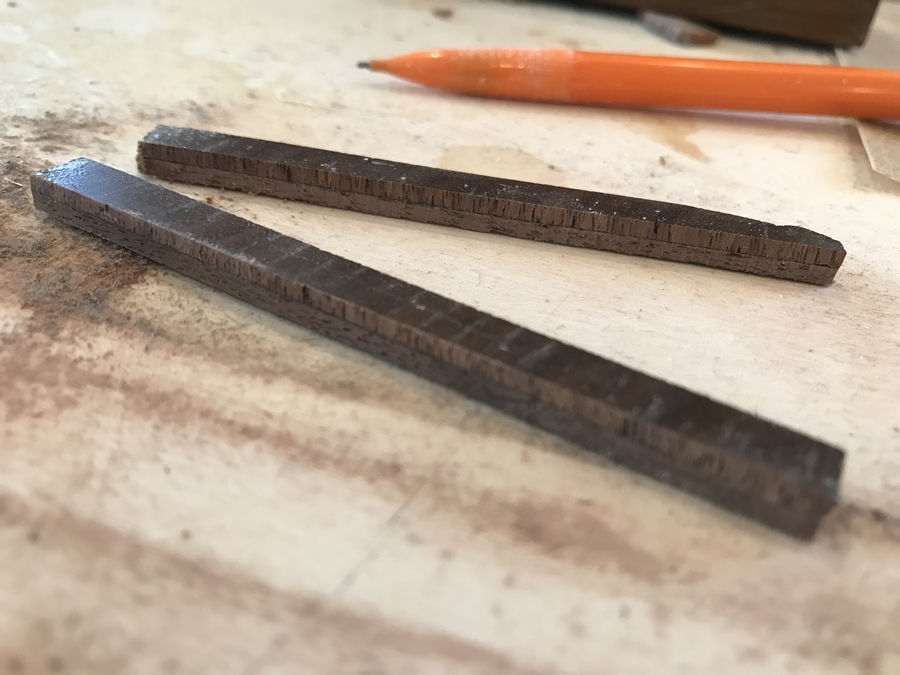 End gran walnut for the pulls, laminated to long grain for stability. 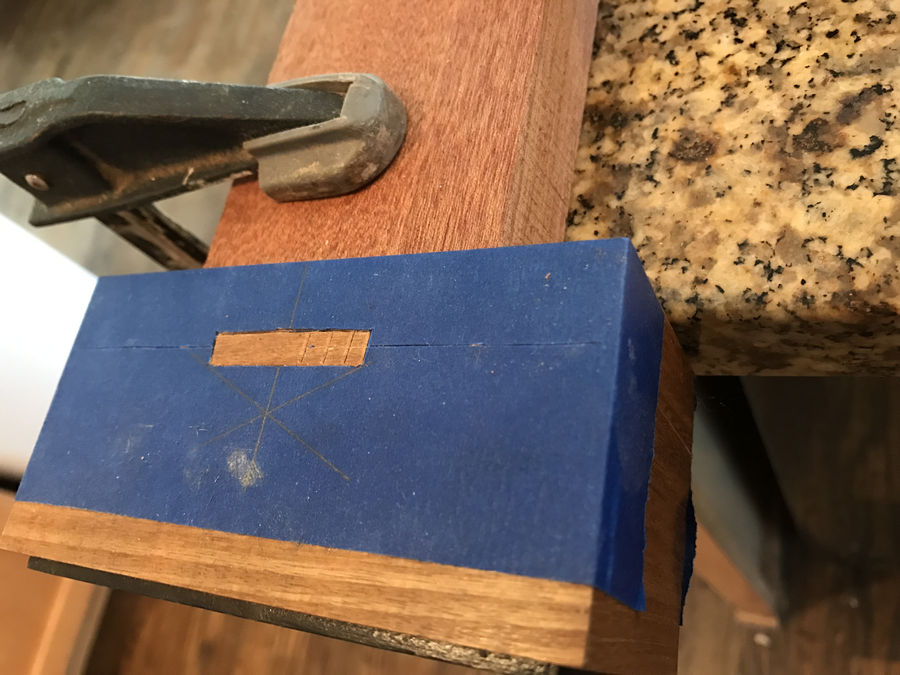 Mortise for the pulls. 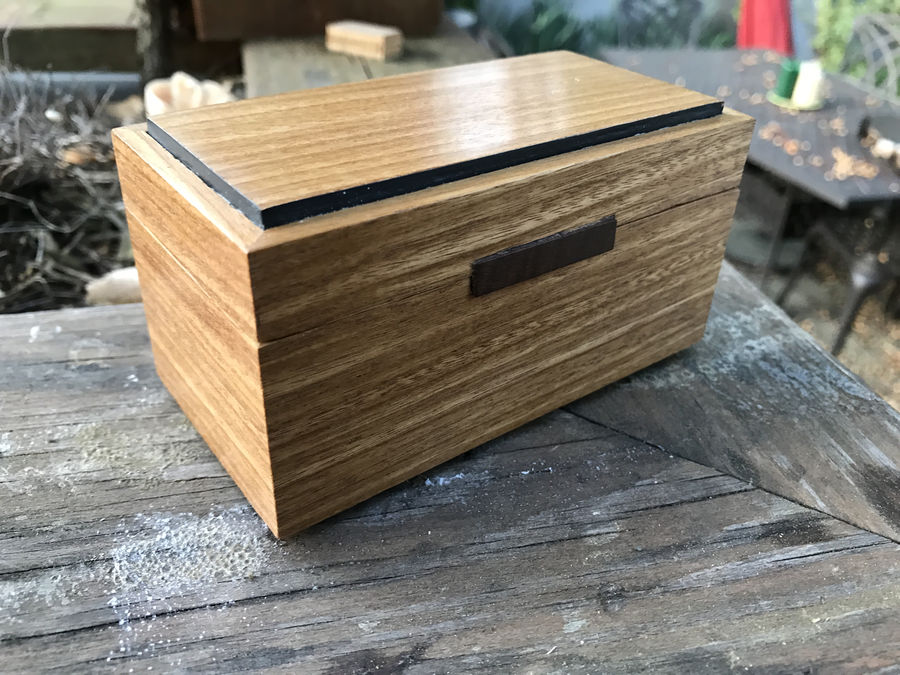 And done.  You can see the tiny gap around the handles in this photo.  I guess it's not glaring but it's all I see when I look at it.

At any rate, thanks for looking.  Up next - two versions of box 25.