The key to any good project starts with the proper selection of materials. Here I'll outline the background of my choices of species and starting thicknesses to minimize waste and achieve the desired look. 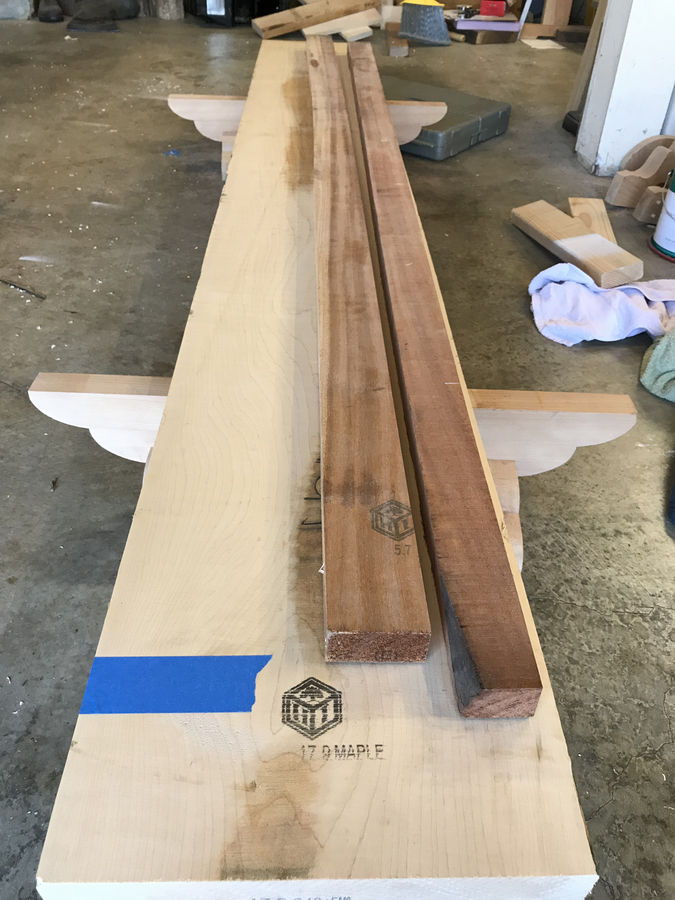 I originally chose to use maple and African mahogany for the shoe rack. Maple is a classic choice for the Nelson bench and I wanted to mirror that. The reason I chose mahogany for the legs was availability. I had some in the shop and decided it would be a good fit. Due to reasons I'll explain later, I ended up using walnut for the legs, which still provides the contrast I was looking for.

Because the bench is constructed of 3/4" material, I could have used 4/4 stock and ripped it to width, but I chose 8/4 instead. I did this because I dislike the heavy ray fleck pattern that quartersawn maple can have, which would have been a likely result of the flat sawn stock I generally get at my lumber supplier. The 8/4 stock allowed me to rip the strips as they would appear in the final configuration on the bench itself.

Using  4/4 material for the shelves would be perfectly fine and would likely be much less work than I had to do when dealing with the thicker material. 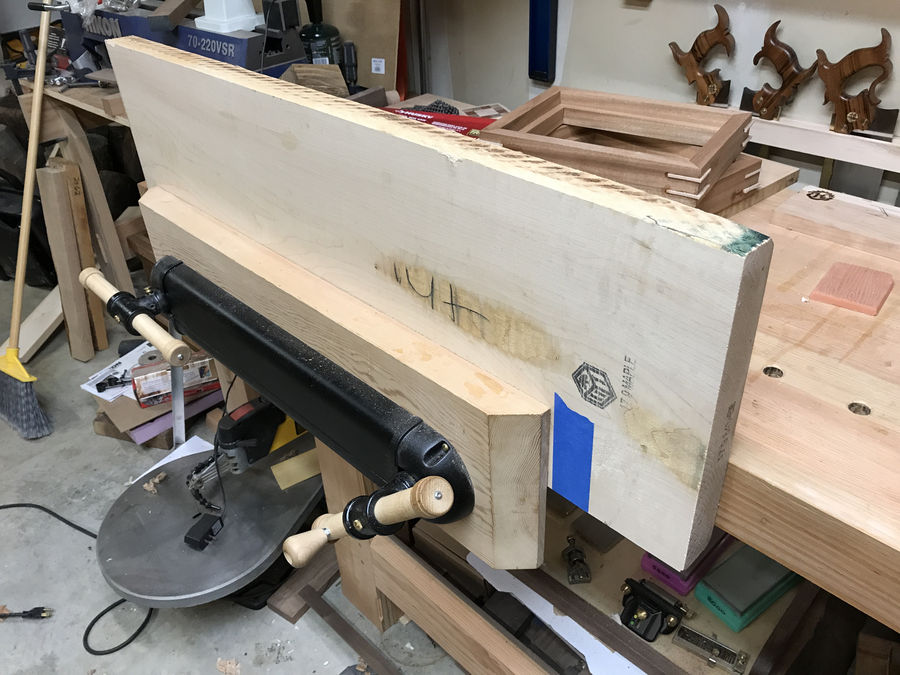 The maple I bought was 13.5" wide and 8' long. Getting all the slats for the shelves was going to be tight if I used the tablesaw to rip the material. It's easy to discount the 1/8" of kerf you lose with each cut, but in this case it would have caused me to come up short. To overcome this, the bandsaw is a wonderful alternative to rip stock, especially if it's rough. There is no risk of kickback that rough stock would present and the kerf loss is less than 1/16".

I first rough cut two sections to length then used my No. 5 Jack and jointer plane to clean up one edge to use at the band saw against the fence. I opted to leave the faces rough and deal with flattening them when the stock was ripped to strips. I could have done this on my powered jointer, but the slabs were large and heavy enough that I was not comfortable with heaving them up to get a good edge without hurting myself (and my ego). 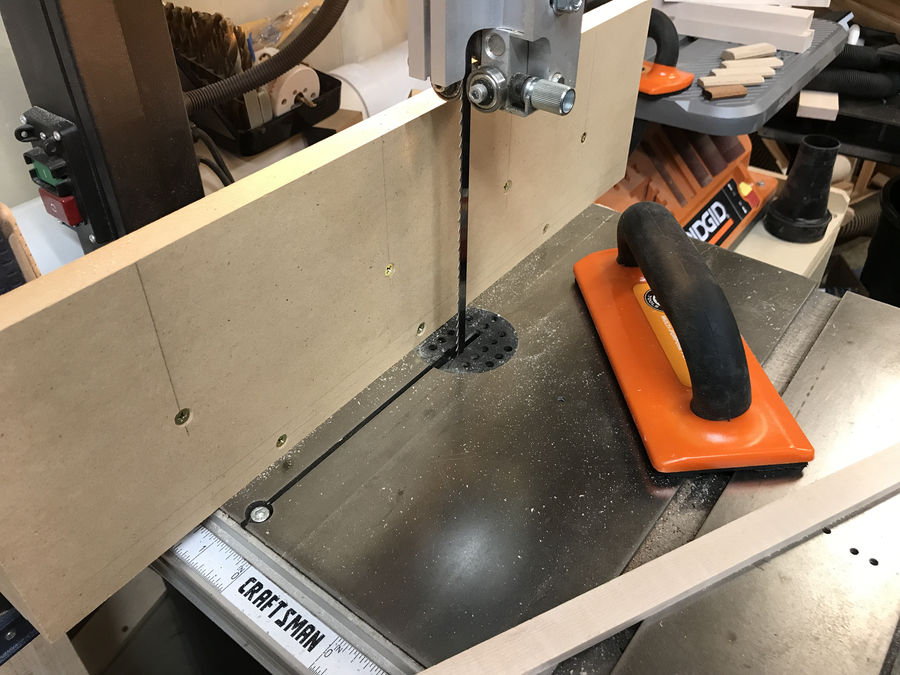 I rarely use the stock fence on my bandsaw because it's quite flimsy, so I used a shop made resaw fence to get an accurate cut. I made the rough cut at a fat 7/8" to give me some wiggle room to get down to a flat and straight 3/4" for the final width.

Ideally I'd have the upper guides closer to the stock, but my fence prohibited this for me. If you plan on using an auxiliary fence like this for shorter stock, I highly suggest making a tall and short variety. 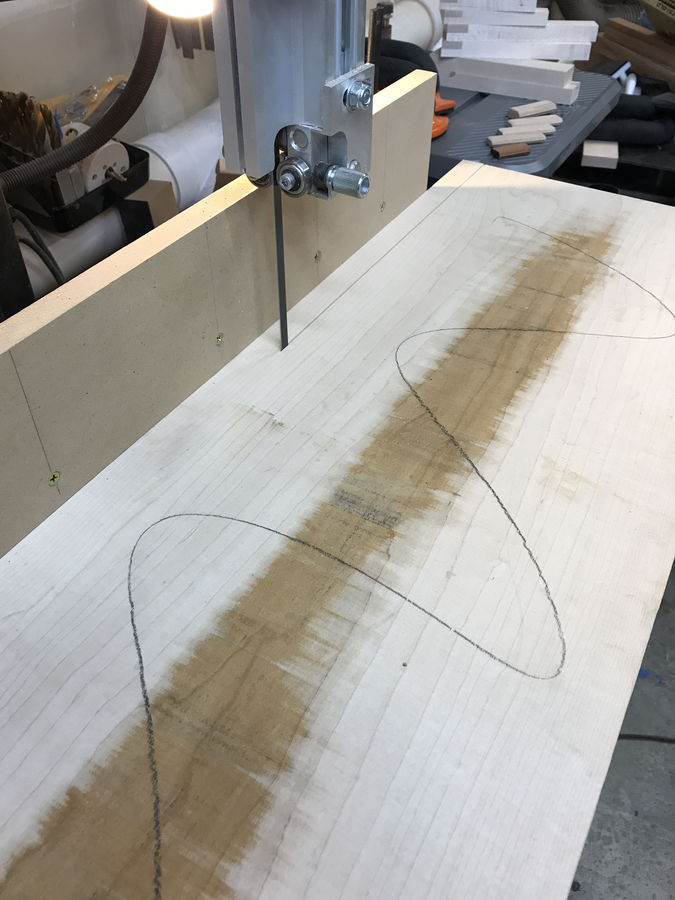 My general purpose blade had little issues ripping through the hard maple, but balancing the slab off the side and end of the table proved to be difficult.

If you use your saw for roughing material often, I suggest attaching a support & outfeed table to the cast iron table. 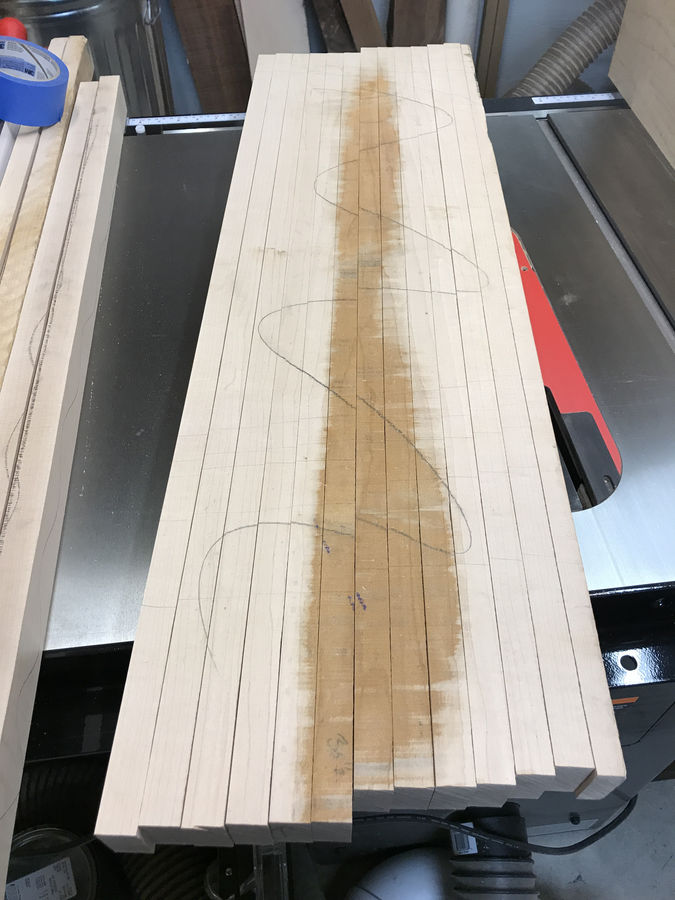 I was intent on keeping the strips in order to keep a cohesive grain pattern in each of the shelves. This is one of the little details that, in my opinion, set great projects apart from good projects. 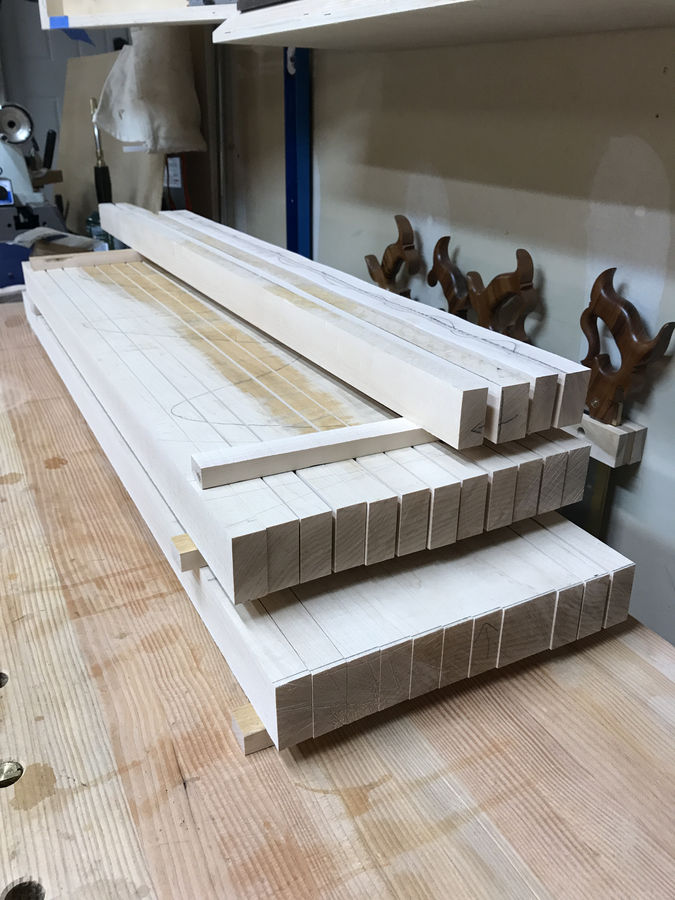 With both boards milled, it's a smart idea to let stock rest for a day to move. Lumber contains many internal stresses that are released when you rip or crosscut large pieces. Resting between milling allows the stock to rebound after these reactionary movements.

This is why I had to abandon the African mahogany I had originally chosen for the legs. I milled the stock and left it overnight to sit, only to find that it twisted quite extravagantly by the next day. I would not have had thick enough material for the legs if I had resquared the material, so I threw it in the scrap pile and moved on. 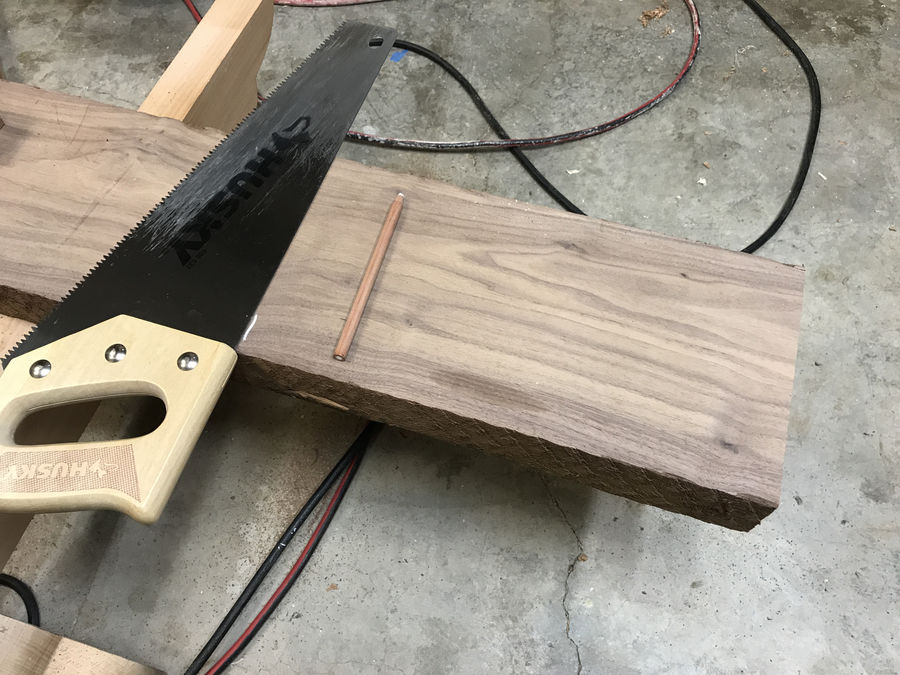 When I cut stock down into component pieces, I find an inexpensive home center saw does a great job. There's no balancing large pieces over a tablesaw or loud jigsaws to deal with. These saws also have the convenience of a built in square to mark your cut lines. 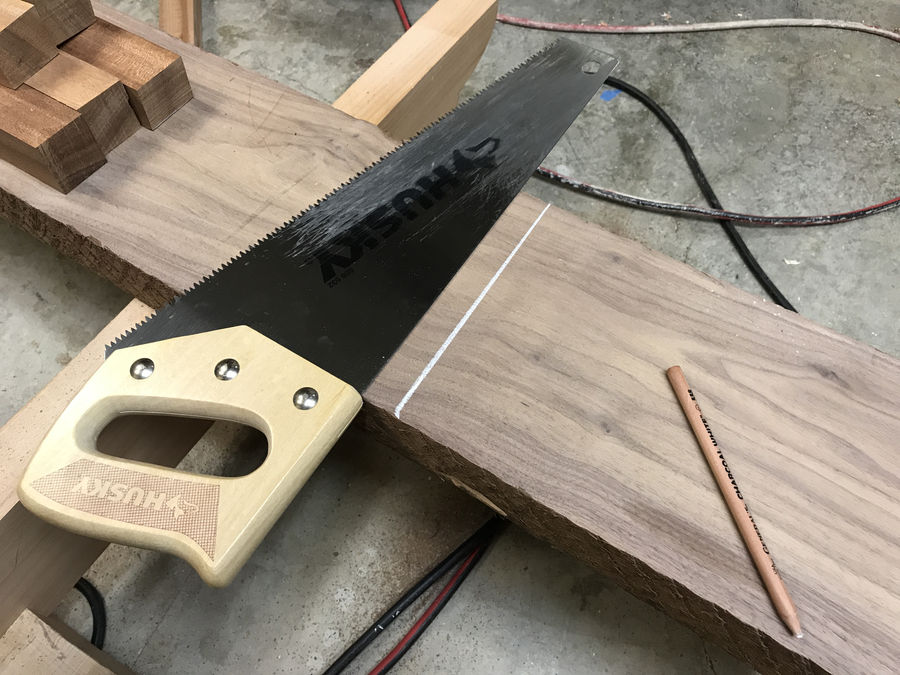 You can see here the way the blade and handle form the square to strike a line. It is likely not perfectly square, but it does the job for rough cut lines. 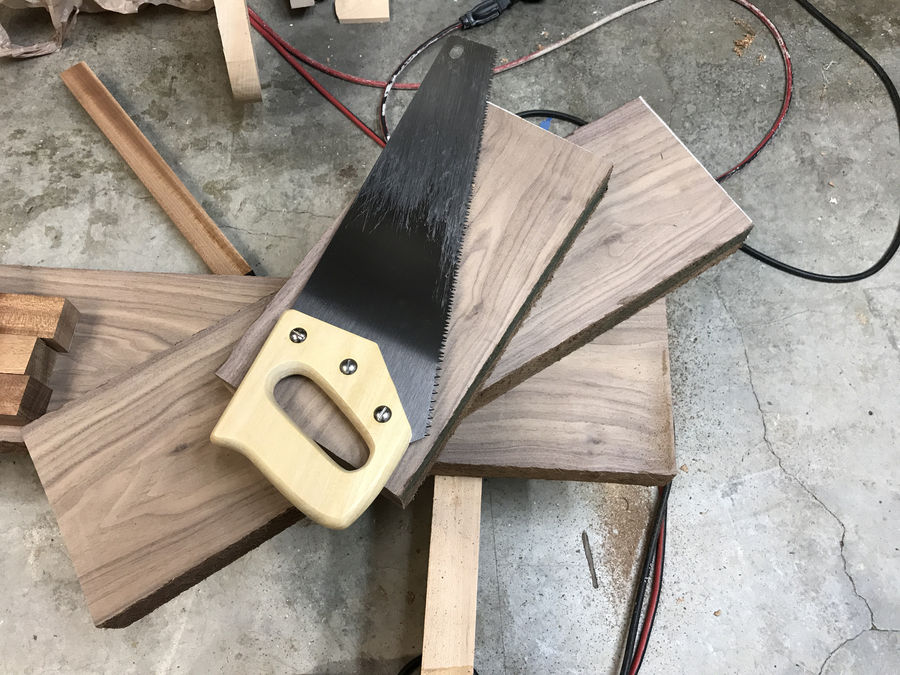 When rough cutting, my rule of thumb is to cut at least 1" over the final length of each piece. That allows me room to clean up any stray cuts with the hand saw. If you have issues with snipe on your planer, it's wise to go 3-4" over you finished dimension to remove sniped ends when making final crosscuts. 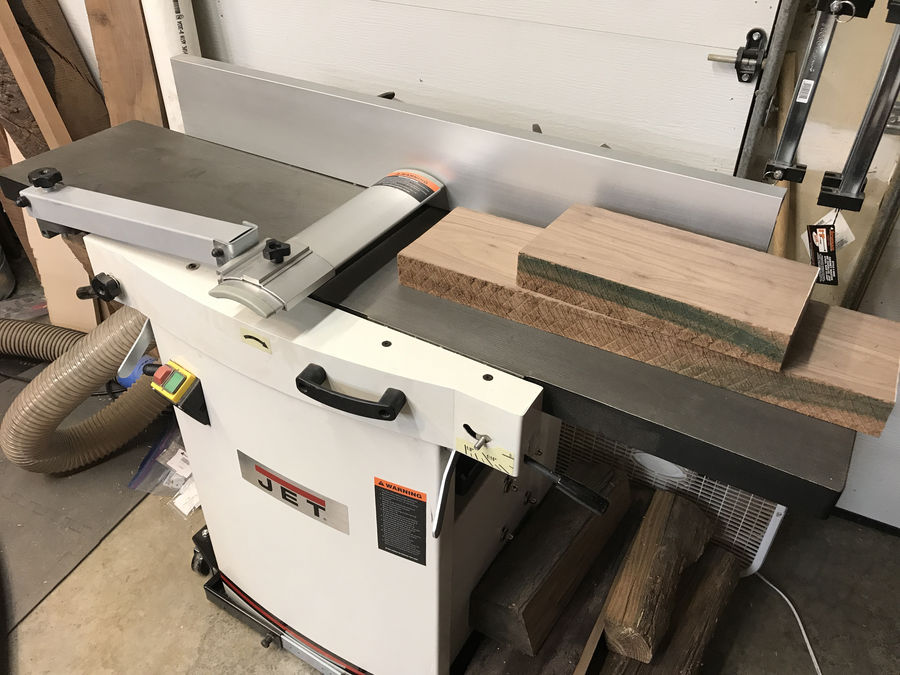 The leg material was more manageable, so I chose to flatten a face and an edge before I ripped to rough thickness the same way I did the shelf slats. I generally would recommend this way of roughing material because the flat edge gives you a good reference on if your stock has moved between milling sessions. 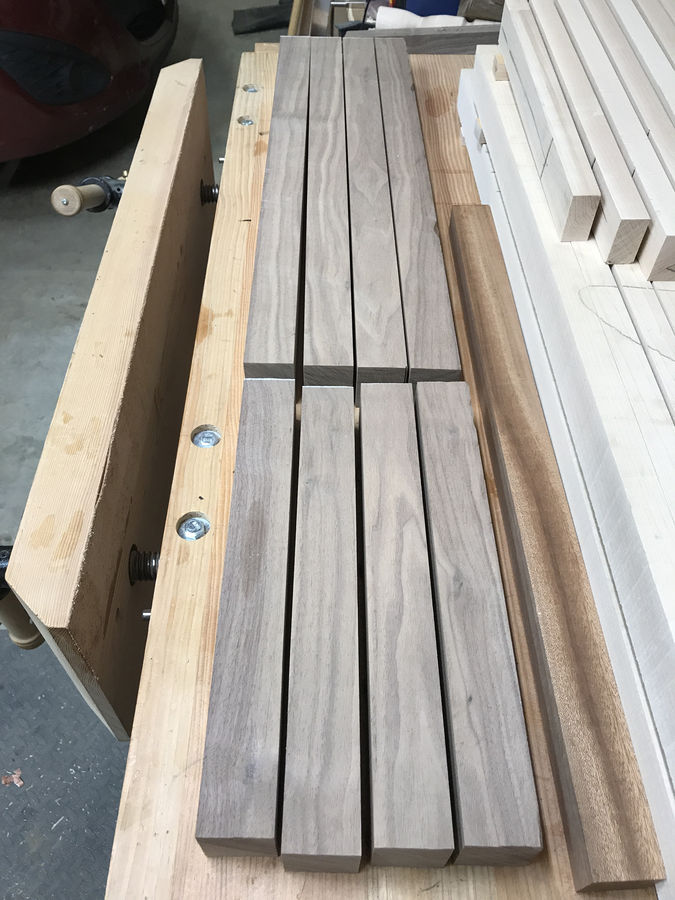 My rule of thumb is mill stock in 2-3 sessions:

I like to wait at least a day between each of these operations. After step three, your stock should be fairly stable, but it's a good idea to get your joinery cut and assembled as soon as possible after this to avoid any last minute moves your wood may still have.

"These saws also have the convenience of a built in square to mark your cut lines." Woah, mind blown. I've never noticed that! Also, great tip about grain continuity. It's the small details that make a big difference!

Great start to the guild build, i'm looking forward to the rest!

More From This Project