This is a large wooden chest I made after spending many many hours playing Skyrim. I really liked some of the wooden chests in that game, but I decided to make some alterations so it would look better. I also looked at some of the mods people had made for wooden chests in the game. This chest was actually made entirely by hand for the wood parts. At the time it was a very hot summer in Melbourne, so power tools were a no go. Each of the sides was made from 12 pieces of 21mm x 42mm cross section pine jointed together at the edge with 3 dowels. The holes for the dowels were drilled using an eggbeater drill and the dowels were cut by hand. I had to do it this way because I had no clamps large enough to clamp the panels together, so I had to rely on the dowels holding the panel together tightly as the glue dried. This actually worked out very well, and after some hand planing, I was left with some very strong boards.

Because I made the panels from so many thin boards jointed together, I was able to offset each alternating board, so at the end, they would automatically form a kind of box joint. When I assembled the side, these box joints helped to align everything and makes the corner very solid.

The hardware such as the latch on the front and handles on the side were all handmade too. The latch being made from a some pieces of 5mm thick steel i had spare, and the handles being made from more offcuts of 5mm steel and a leather belt.

The finish was a stain and varnish blend that was applied in many thin coats and brushed up around the steel to build up a thicker patina on and around the steel. This was before I learned about pine blotching so unfortunately I didn't take any precautions against stain blotching. 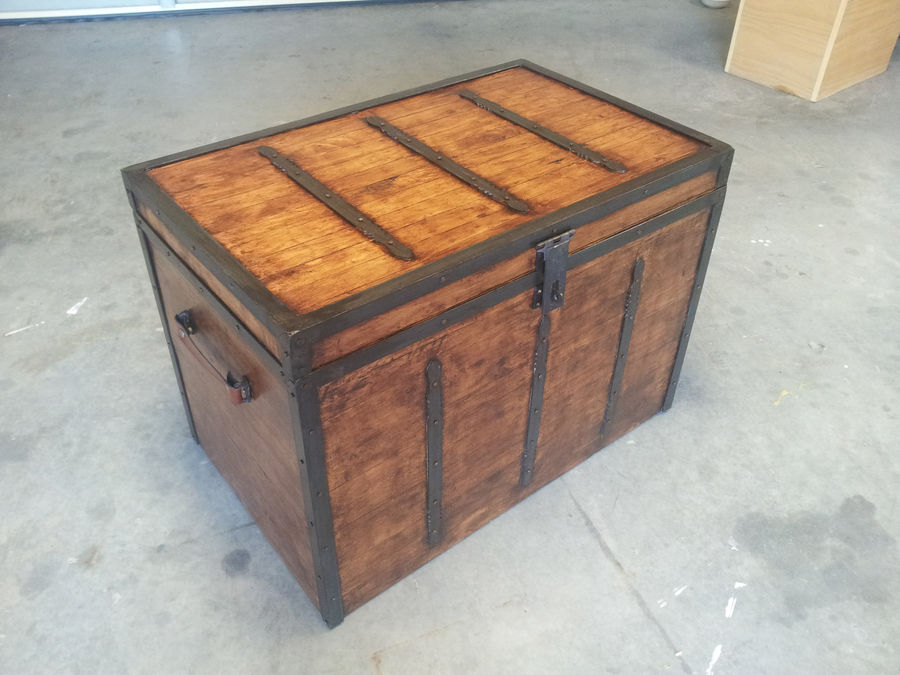 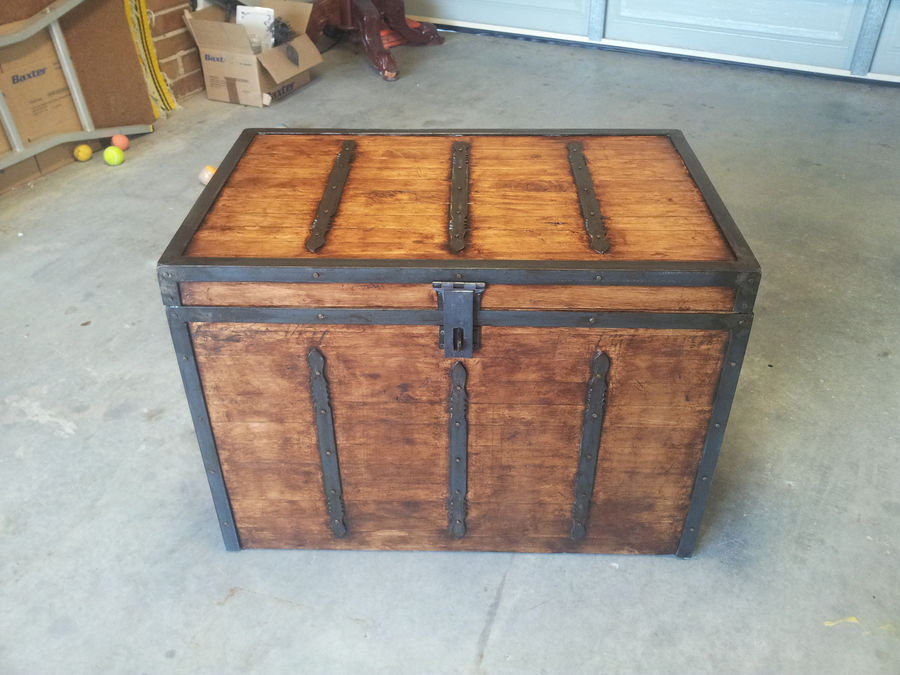 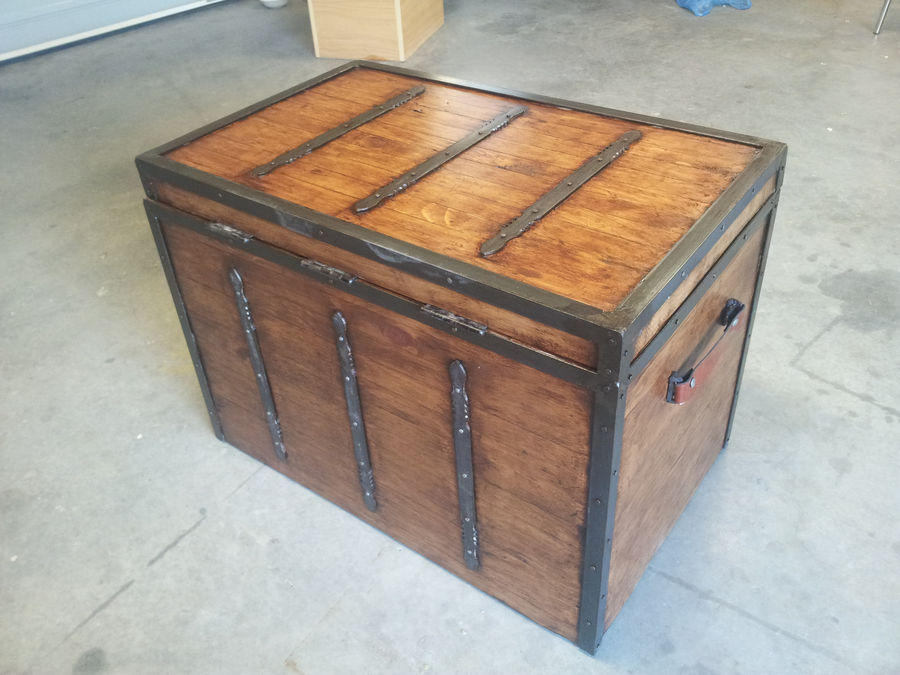 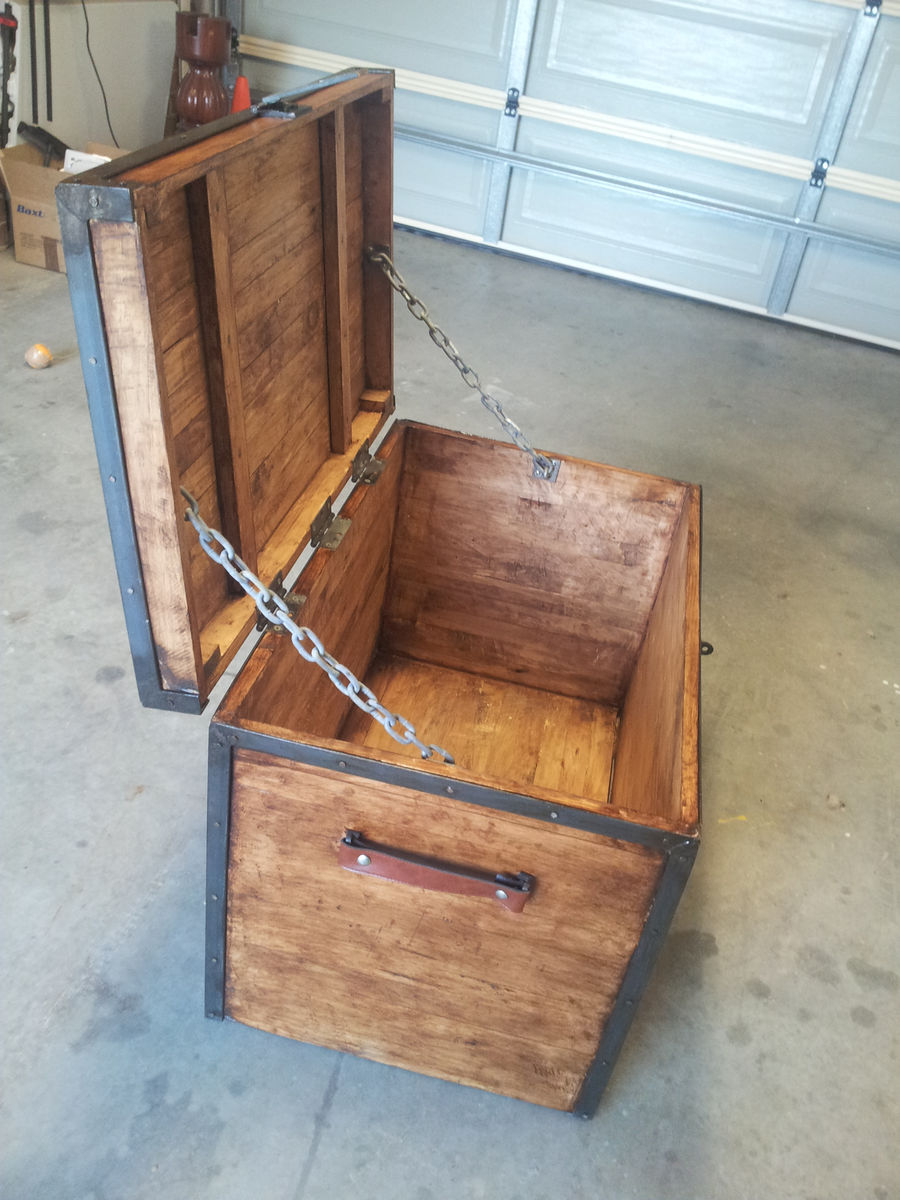 Chest open showing the inside, including the reinforced lid, and chains holding it open. With the steel the whole box (especially the lid) ended up being quite heavy, so heavy duty chains were needed. I made the mounting shackles myself by welding a half-cut link to a plate of 5mm thick steel in which I drilled holes for mounting screws. Big enough to fit me inside! 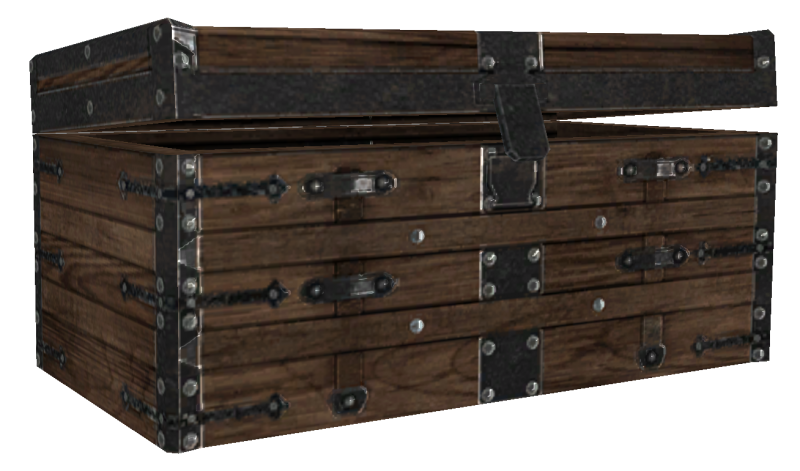 Many slat design loosely based on the wooden chest from Skyrim, with some simplifications and modifications to suit me better. 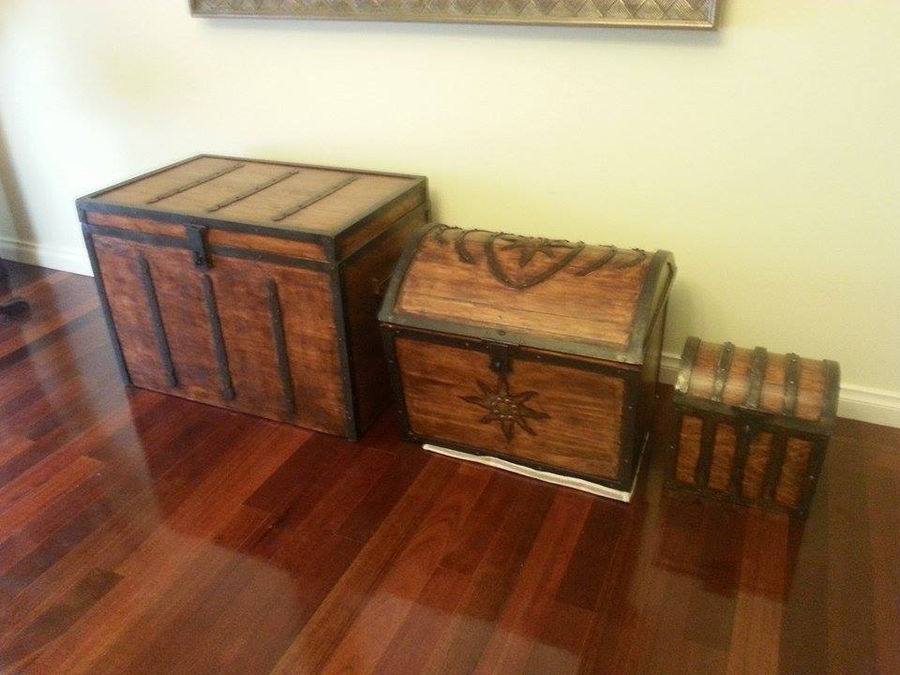 I put on a couple more coats of finish after the earlier showcase photo. Here is the only other photo I have of it in its final state (next to two other chests I've included here) 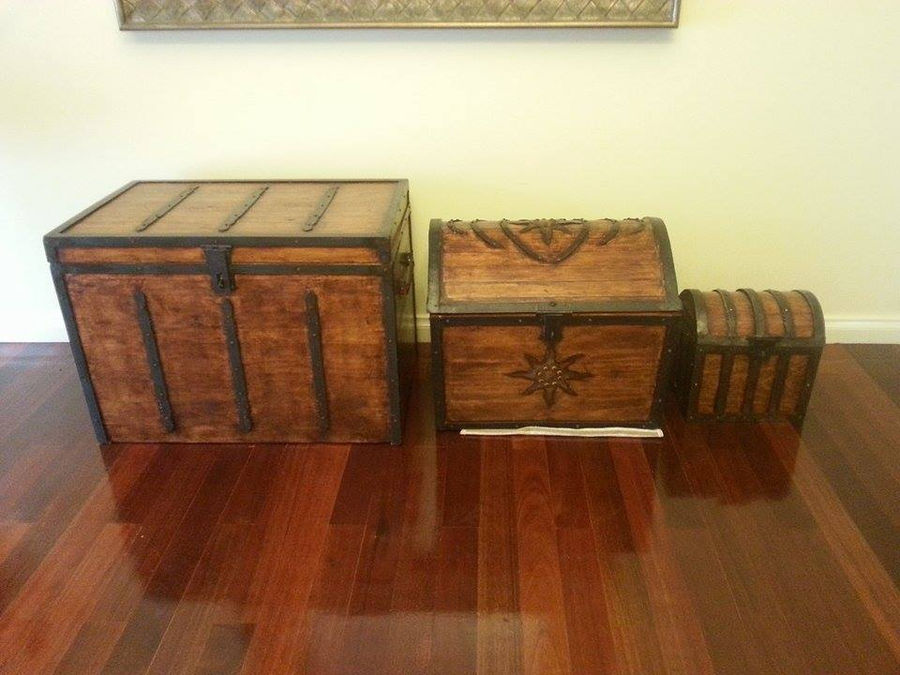 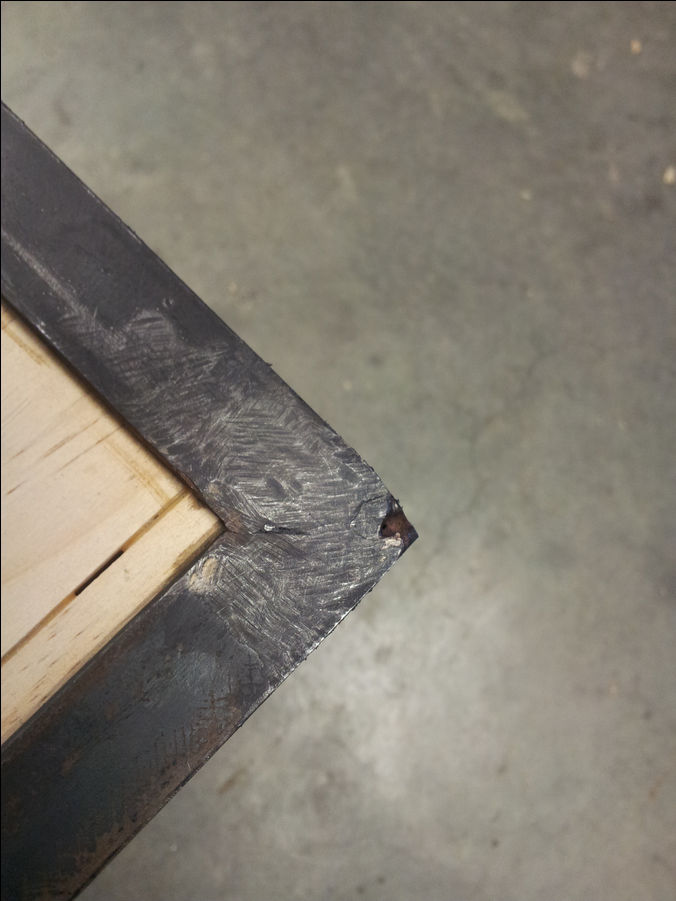 Unfortunately I did not think to take many build photos. To be honest the piece didn't look too great before I added the steel but it really came together once I did. Here is a close-up on the welded corner. I have ground back the weld so it doesn't show, and patina-ed it to make it look more worn. 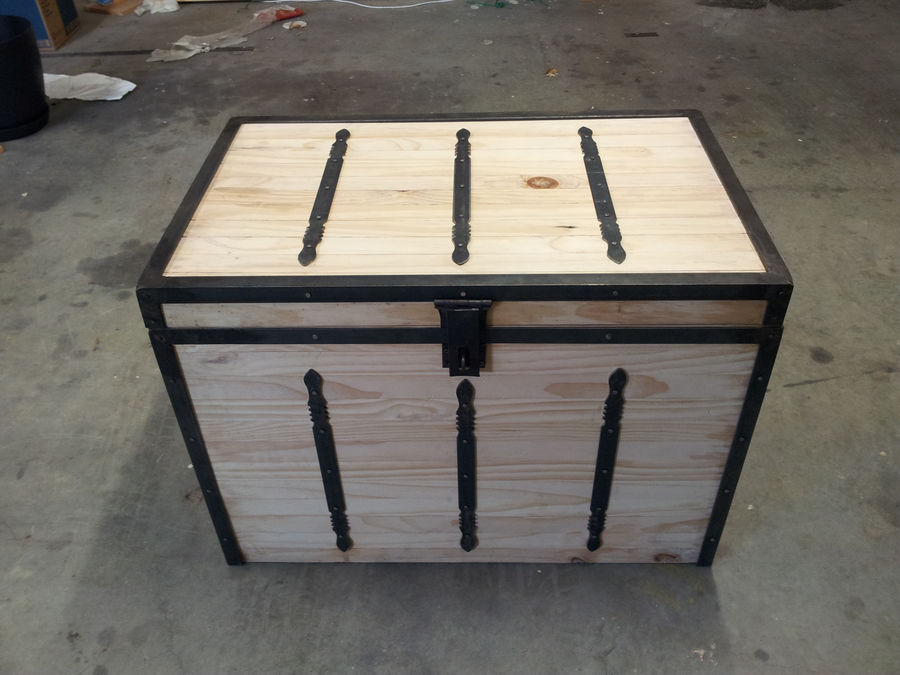 I did my best to pick out only pieces without knots, but I bought so much 21mm x 42mm that 1 piece ended up having a knot in it (how frustrating!) If only I had to foresight to save it for the back panel! 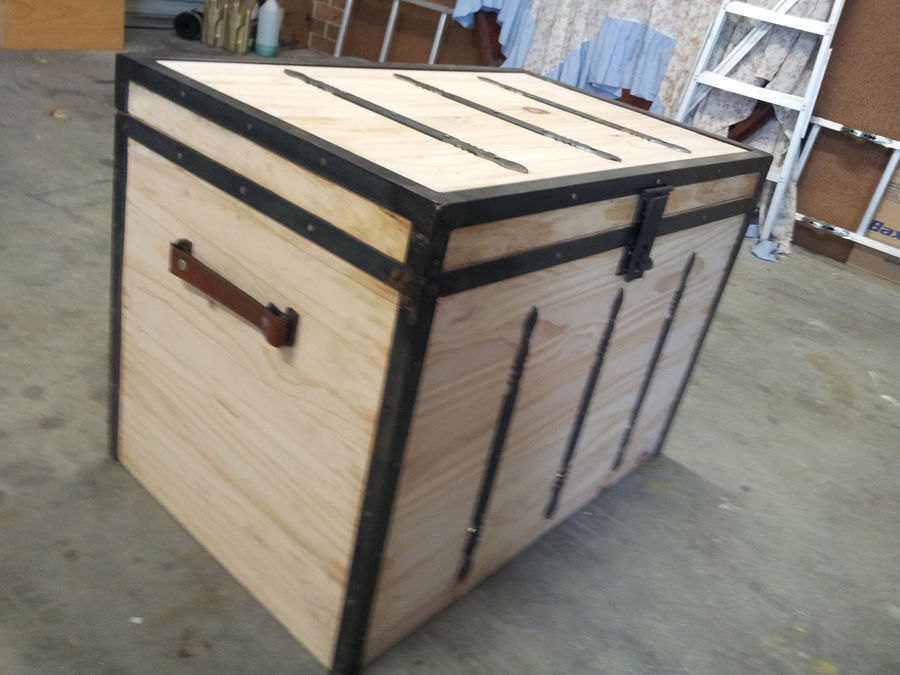 Here's a picture showing the side handle. In hindsight, they would probably break off if they were used to lift the chest, since with the steel, it ended up being significantly heavier than I expected. The handles can still be used to drag and push the chest when its empty though, that's the only way I could get it into the house. 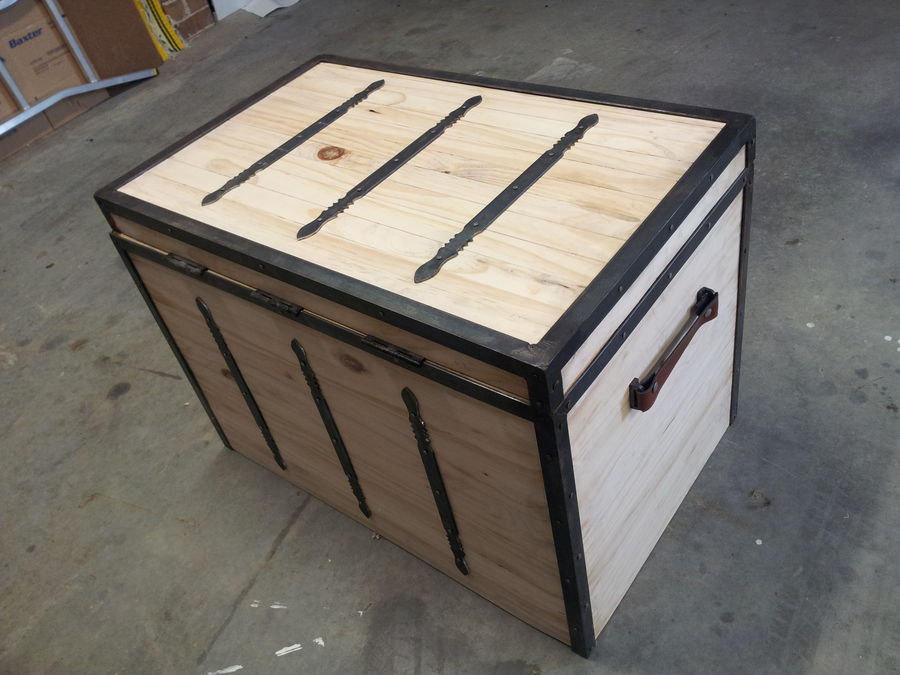 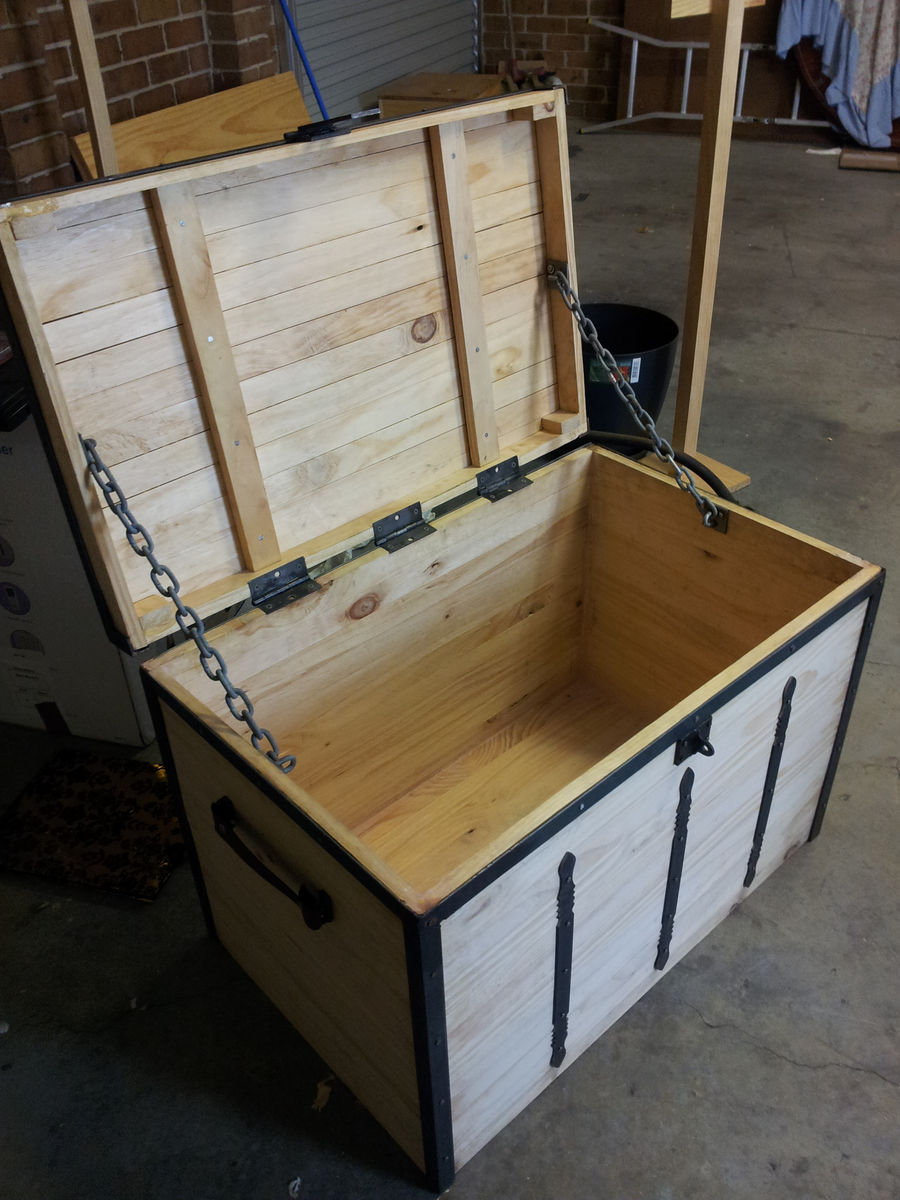 Such a heavy lid called for serious support which is why I went with 3 heavy steel butt hinges. They were patina-ed by heating them on the stove and then brushing on oil and burning it off to generate a black coat.