My wife bought a piano keyboard last year with the intent of learning how to play. It lives in our bedroom but didn't have a seat, so we had to drag in an office chair or dining chair to sit at it. I wanted to get a bench, but wasn't willing to shell out the cash when I knew I could just whip one up.

I made a goal to get rid of scraps this year so I took a cherry board that was not good enough to use in a normal furniture project and some 12/4 cutoffs that I had for some legs. Since the materials were free I tried a design that had popped into my head a few months ago, this way if I hated it, there wouldn't be much of a loss of funds. 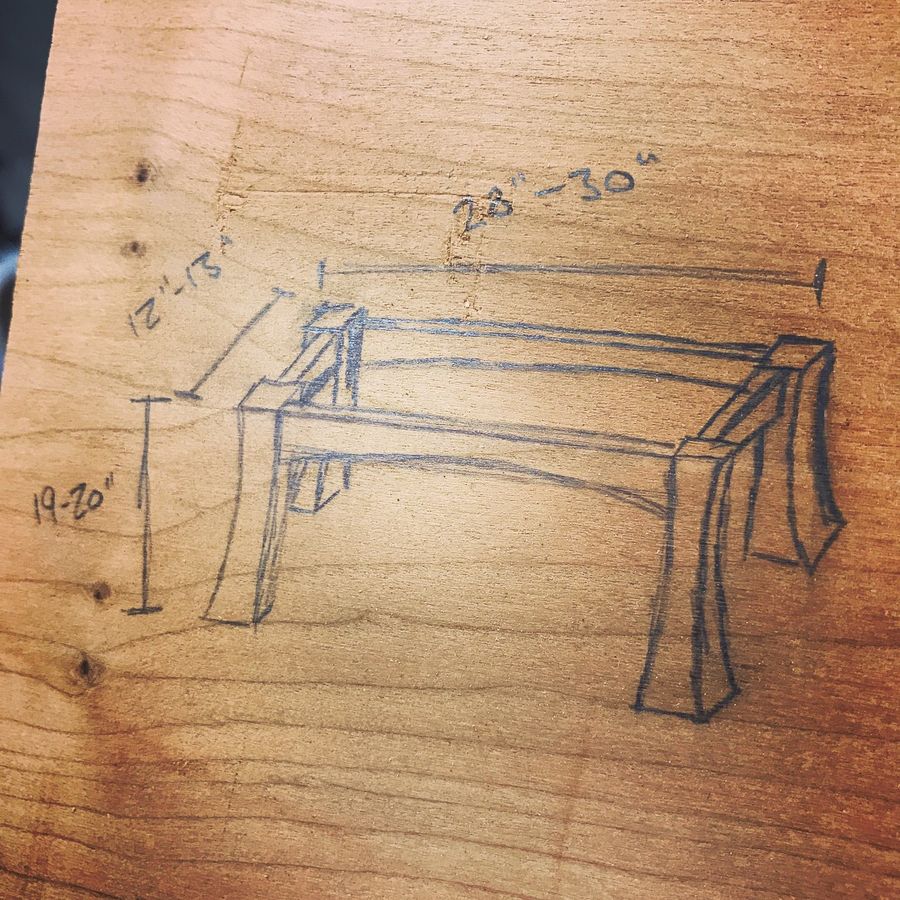 This is what got my mind ticking on the design. Something I scribbled down on a scrap of ply that was sitting on my bench at the time. I came back and added some dimensions for "a typical" piano bench, but this is all I was going off of. 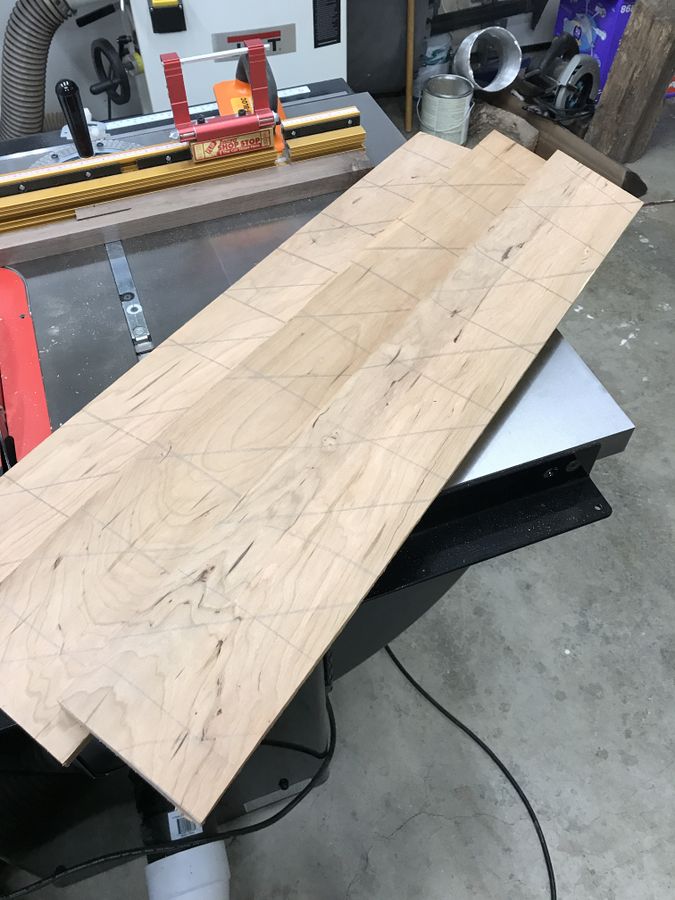 Took one board for the top and chopped it up. I always make sure to mark all surfaces to check for complete flattening and to remember which surfaces have been prepped. 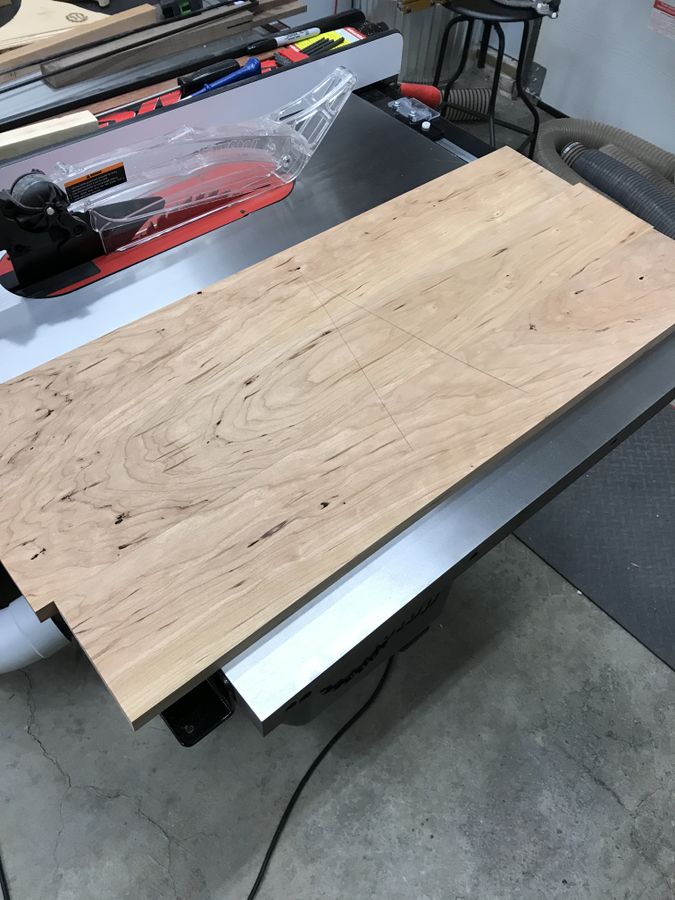 After I milled up, I went ahead and tried an orientation that I liked on the boards. I felt like I got good grain flow on this one. 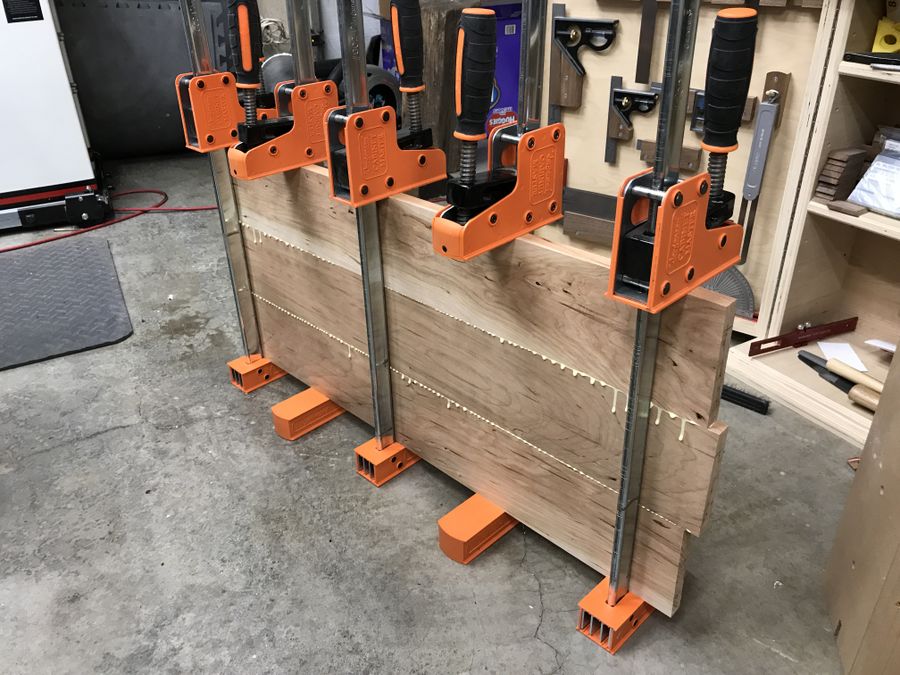 Good amount of squeezeout, but I still saw some warping when things came out of the clamps. More on that later. 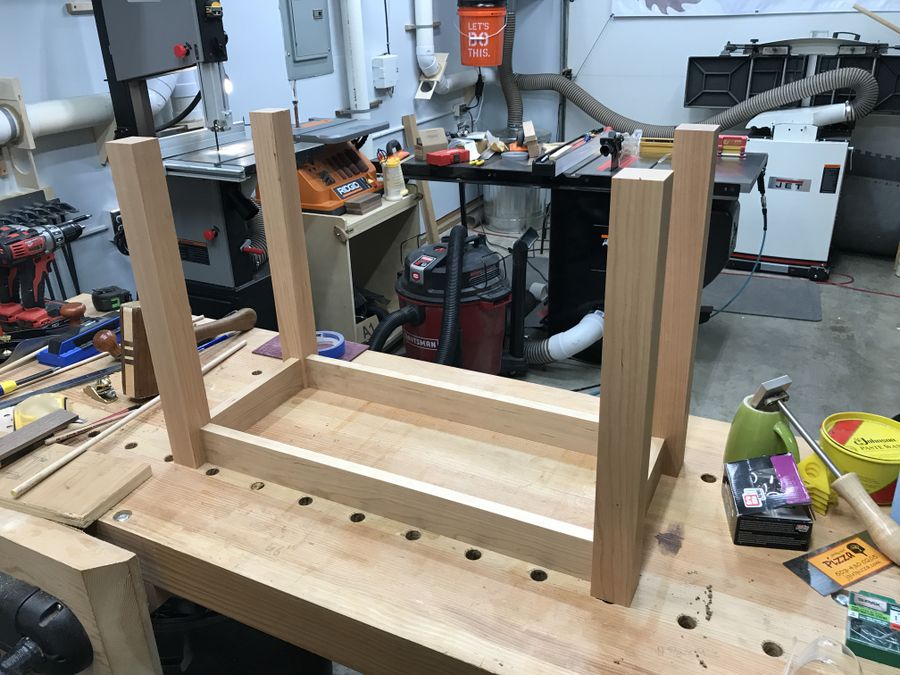 I knew I'd be removing a lot of material from the legs on the outer ends, so I stuck the aprons as close to the middle as I could. I realized this might cause some issues with joinery, but I thought I'd cross that bridge when I got to it. 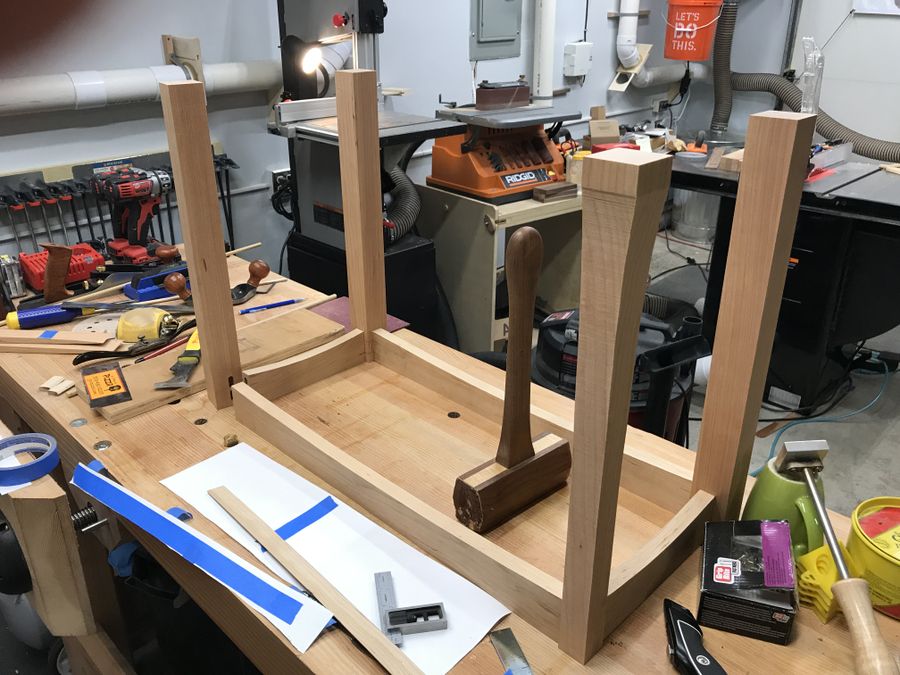 For the leg profile, I really just freehanded the pattern and copied it to both sides. Once I got one leg shaped the way I wanted it, I used that as a template for the others. If this was an 'important' piece of furniture 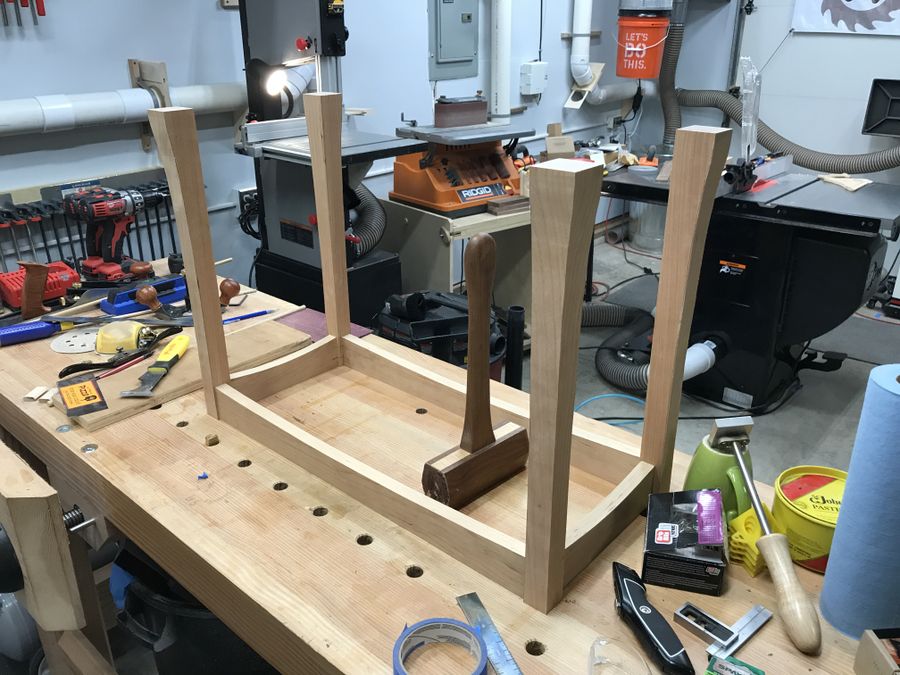 I was a little sketchy at first on how the design was going to end up, but with all legs smoothed up, I think it looks ok. 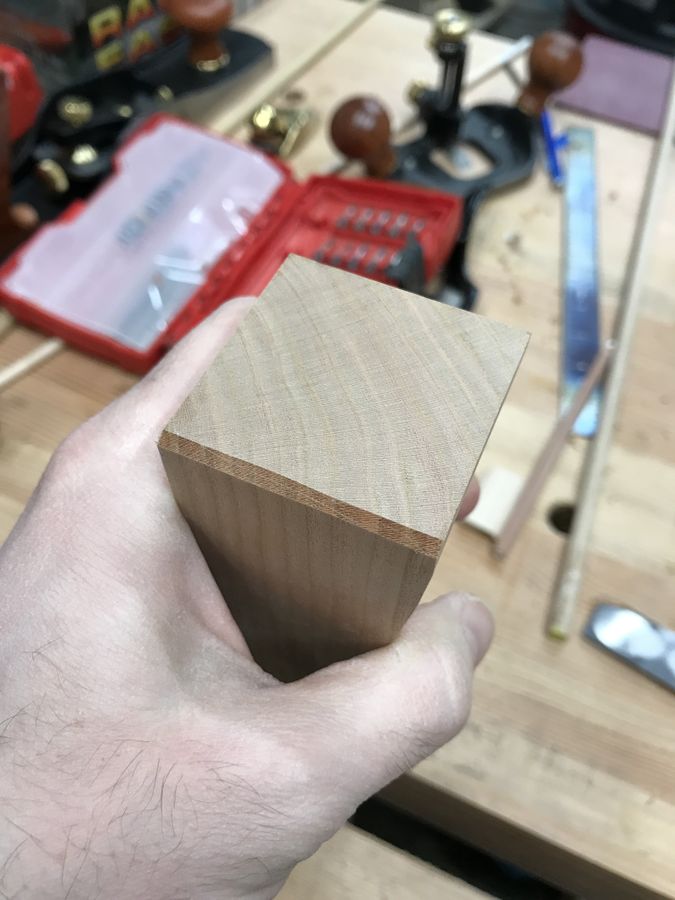 Always chamfer the bottoms of your feet, it will prevent the side walls from chipping out when you scoot the piece across the floor. 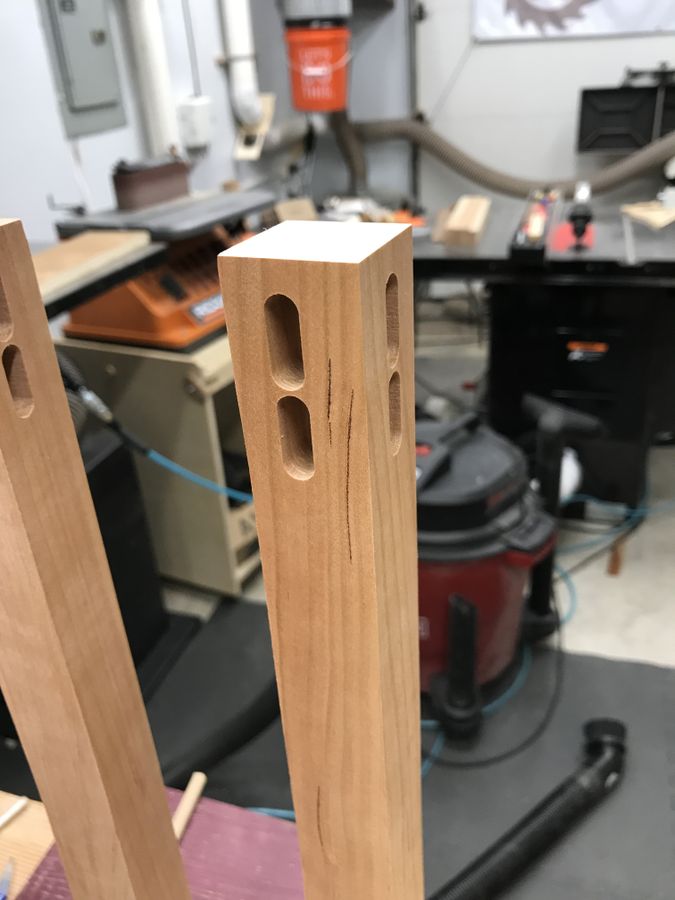 Now, I know I'm likely violating some Festool Domino cardinal rule of domino spacing here, but I don't give a crap. I wanted to get a larger tenon for the apron and this seems to work. Everything fit nice and tight like I thought it would. 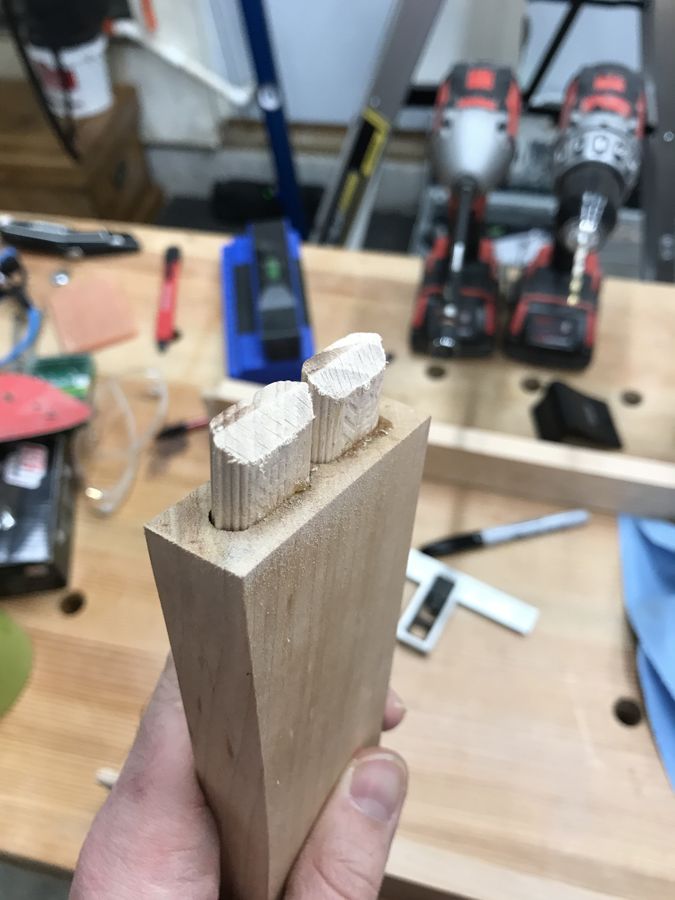 With the leg mortises so close together, they ended up meeting at the bottom. It wasn't the whole mortise, but just half. The solution was simple, hit the inside corners on the belt sander and I had 0 problems with fit. 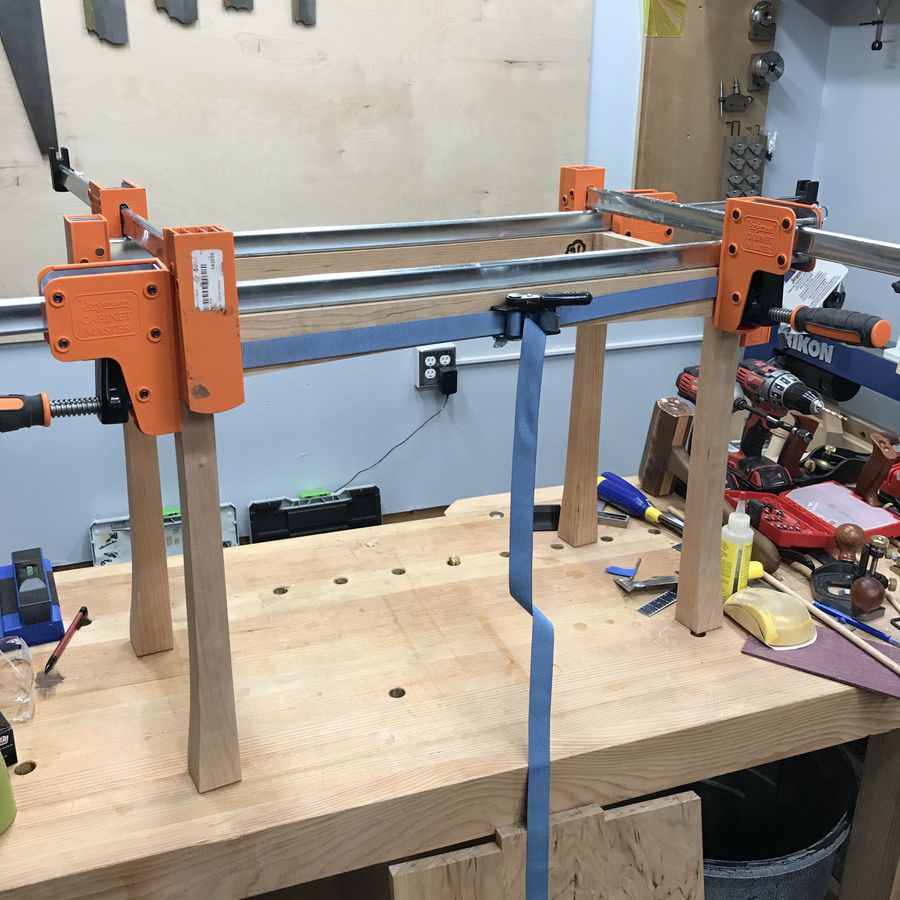 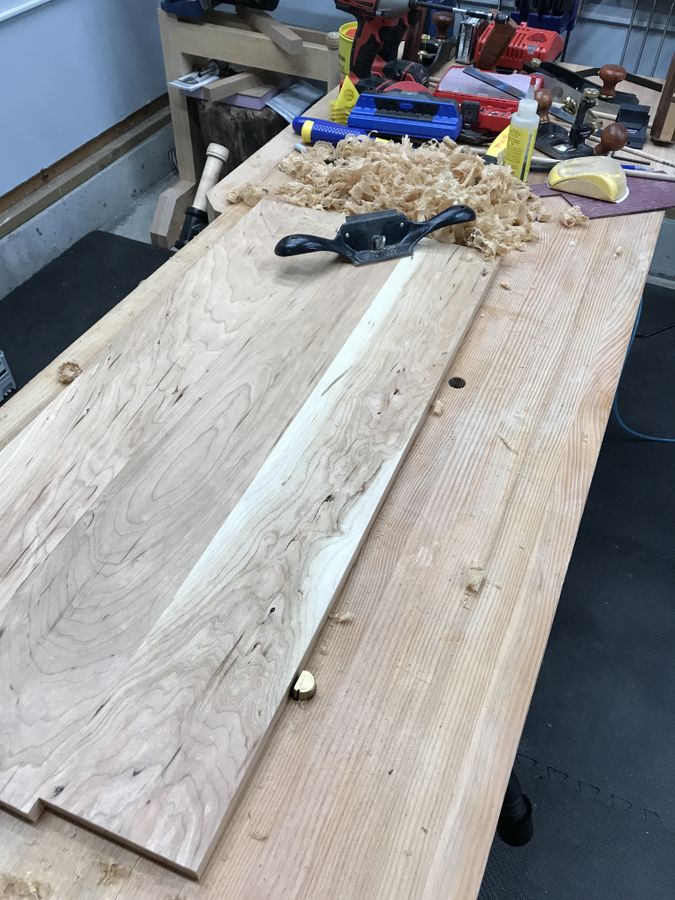 Back to the top. Despite my best efforts, it did not come out of the clamps flat, and it was 2" wider than my jointer/planer. The only options here would be to try and fake it with a sander, or flatten by hand. I chose the latter.

I started out by using my cabinet scraper to get rid of the glue lines. 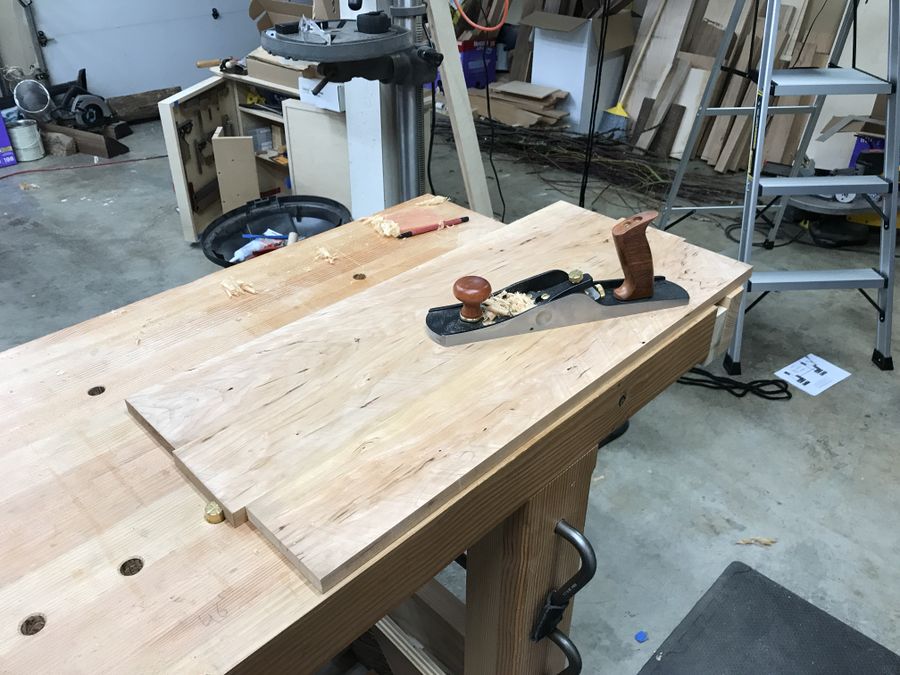 Once the sides were decently cleaned up, I took the majority of the flattening with my low angle jack. I did the normal across strokes followed by diagonal runs. Each side flattened up very nicely. I do need to touch up the iron on my jack, it was leaving tracks. 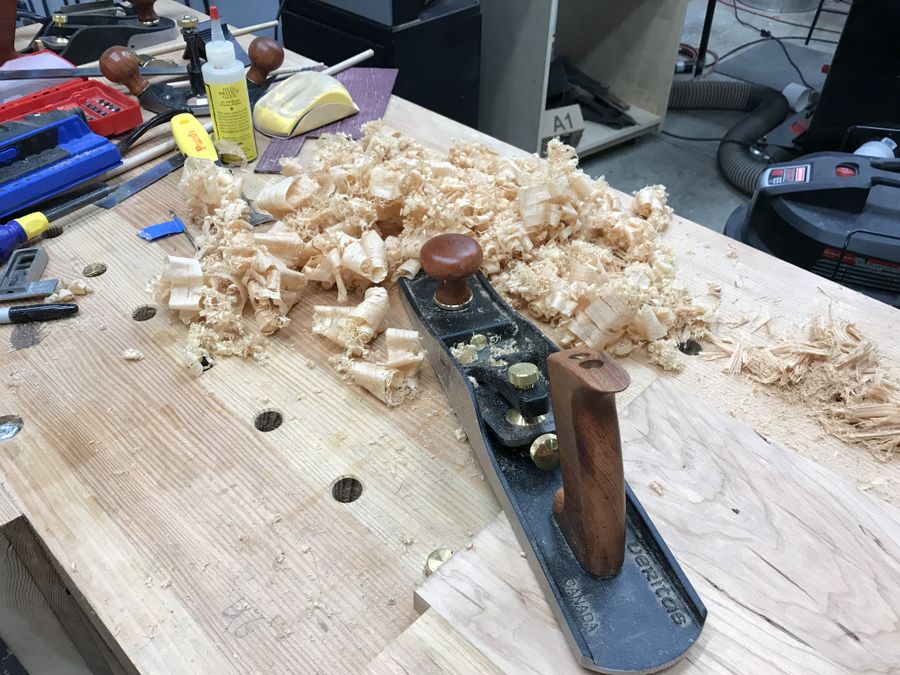 Not a ton of work, but work nonetheless. 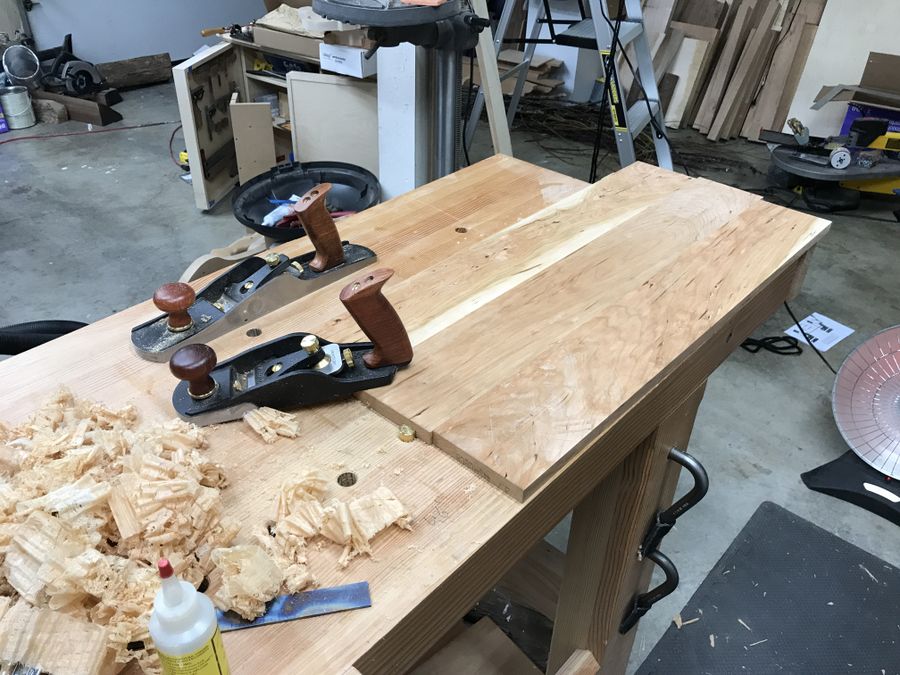 I cleaned up what I could with the jack then came in with my bevel up smoother and things couldn't look better. 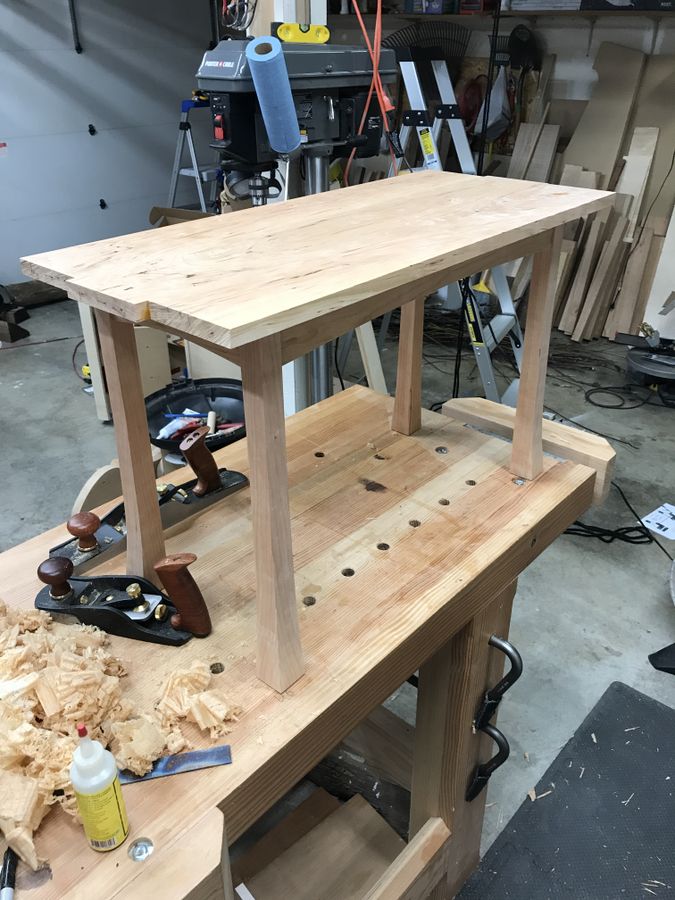 Checking the top against the base. I must have done a great job because I had not rocking or gaps against the legs and aprons. From here I decided on what kind of an overhang I wanted so I could trim to final width. 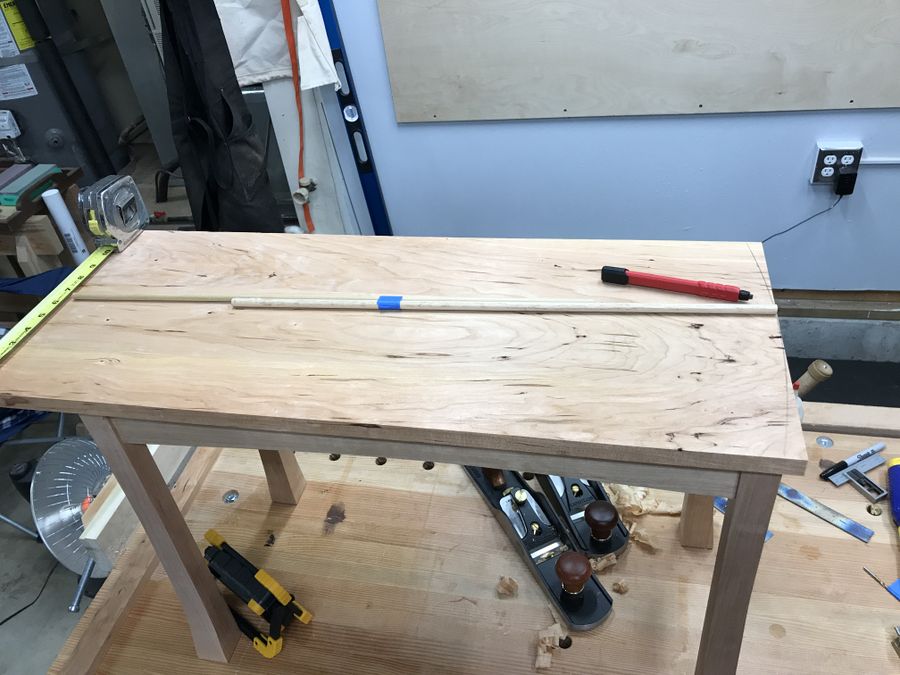 I don't have a drawing bow, so this is how you can make an arc ghetto style. I used two dowels as my compass to draw the arc. I fiddled with the length of the rod for a while to get a shallow enough arc, but it worked out. All I did from there was hold the one side in the middle, and swing my hand holding a pencil to mark the curve. 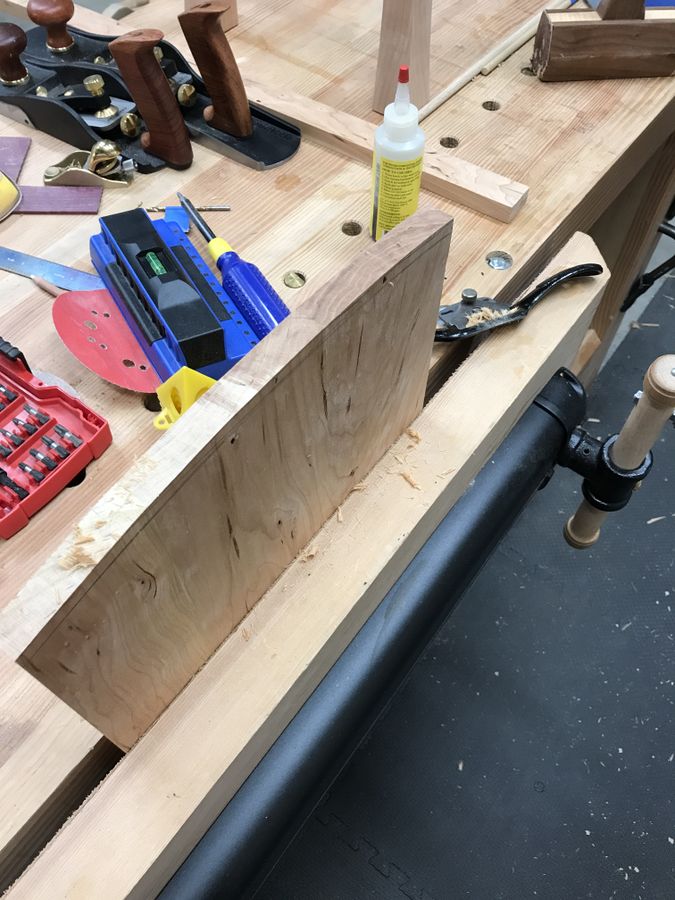 I cut the arcs on the bandsaw, so there was some cleanup to do on the ends. I used my spokeshave which works well here. I do need to sharpen the blade though. 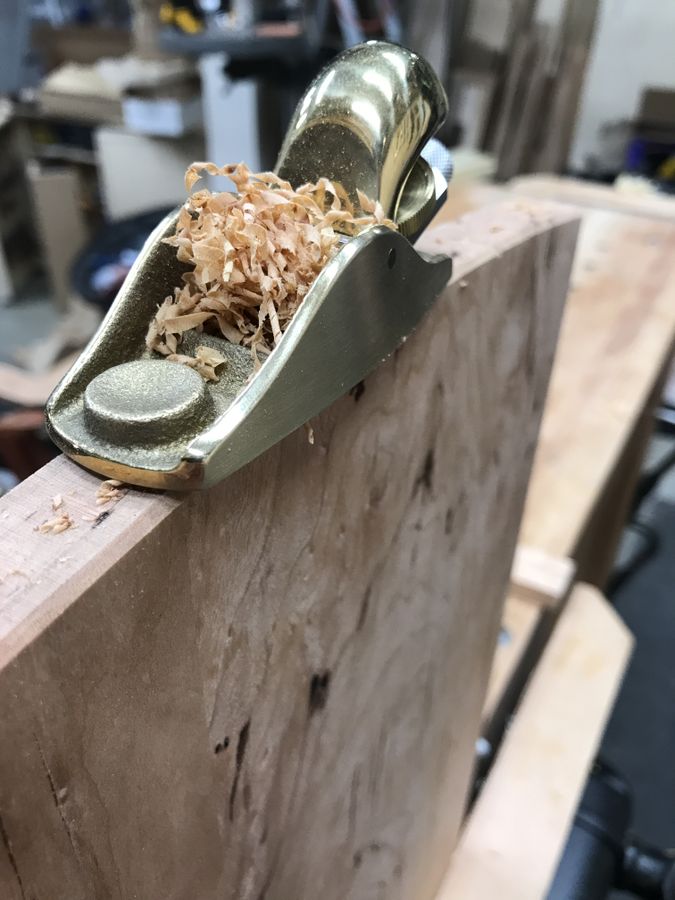 With the top profiled correctly, I put a simple chamfer down to break the corners on the top edge. The bottom edge was hit with one or two swipes to break the sharpness but retain a crisp transition. 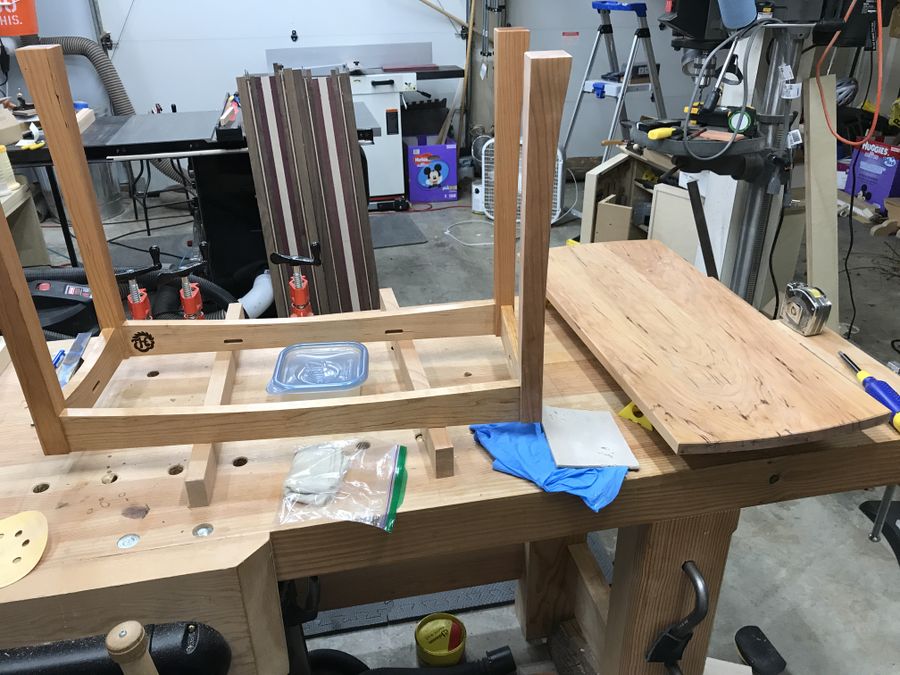 I chose a wiping poly for the finish, since it would be semi high use at the keyboard. Finish prep went fairly well. 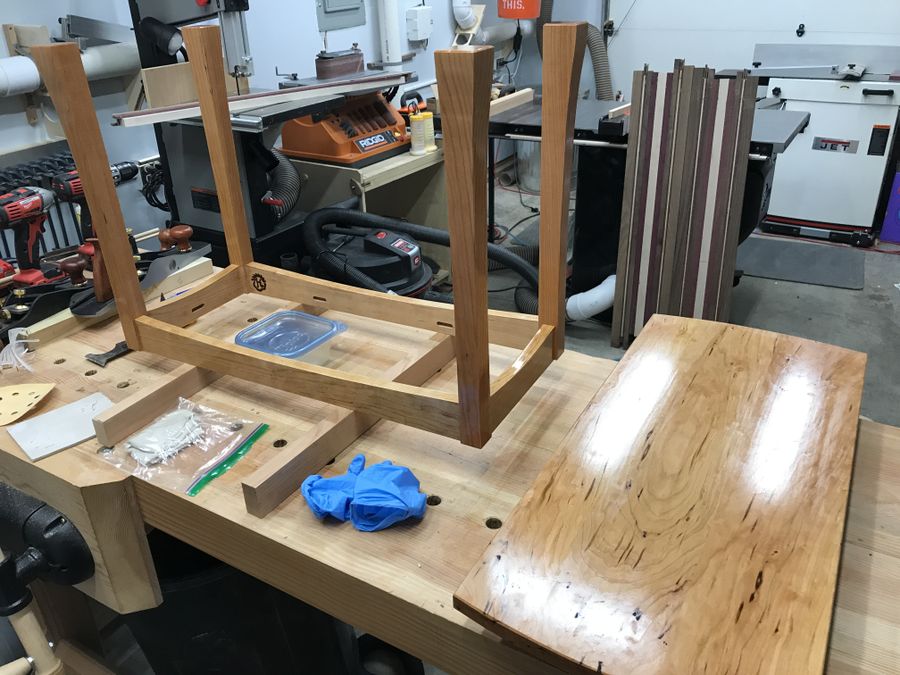 Bringing out that rich cherry color is always a treat at the end of a build. 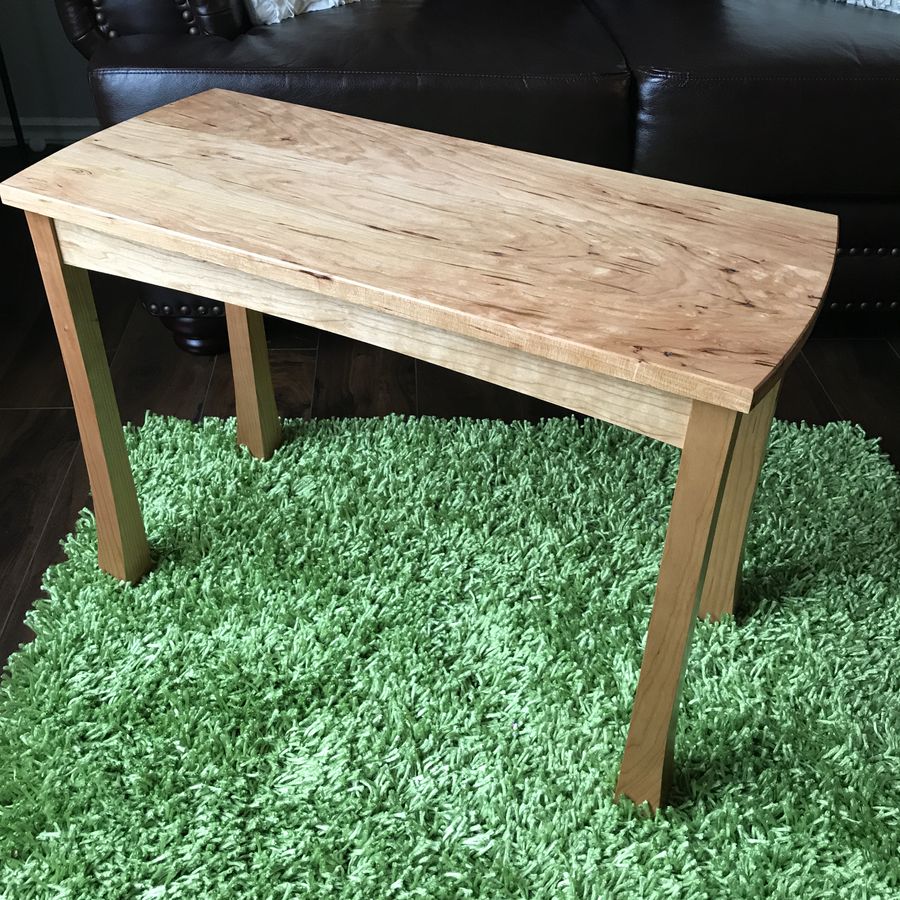 And that's all she wrote! The top will likely need to be replaced later as there are some checks/shake in the boards, but for a simple piece to meet a need, it's more than enough. I can't wait to see this darken up once the sun starts shining again.

Awesome job, Scott. I like this design. You really paid attention to the finer details with all of the curves from the feet to the top.

I love using 'ugly' boards they alway turn out having way more character.

Looks amazing!  I love how you took something that I would have made, then showed me how adding a few curves can make it look so much better!  I shall remember to be less boxy next time I work on something that allows.