Years ago we used to have a full length mirror on the wall of our bedroom, that is until my oldest daughter knocked it off the wall and broke the super robust cheap plastic frame around it.

Now that it's years later, I can finally get around to fixing that problem and also use up some extra ash stock that's been chilling in the shop without a project in mind. 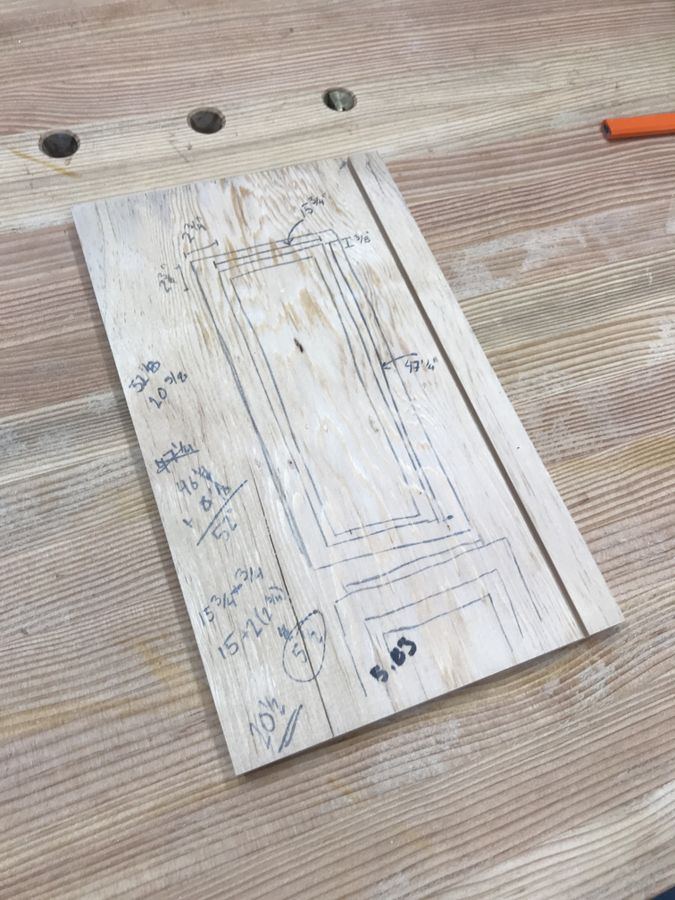 Because I was working with an existing mirror and I wasn't using miters, I needed to make sure that my math was correct on dimensions. Thankfully I passed Jr. High algebra and was able to get things right.

I have been meaning to get a shop notebook for stuff like this, but planing off 1/32" from this Douglas Fir plank works well too. 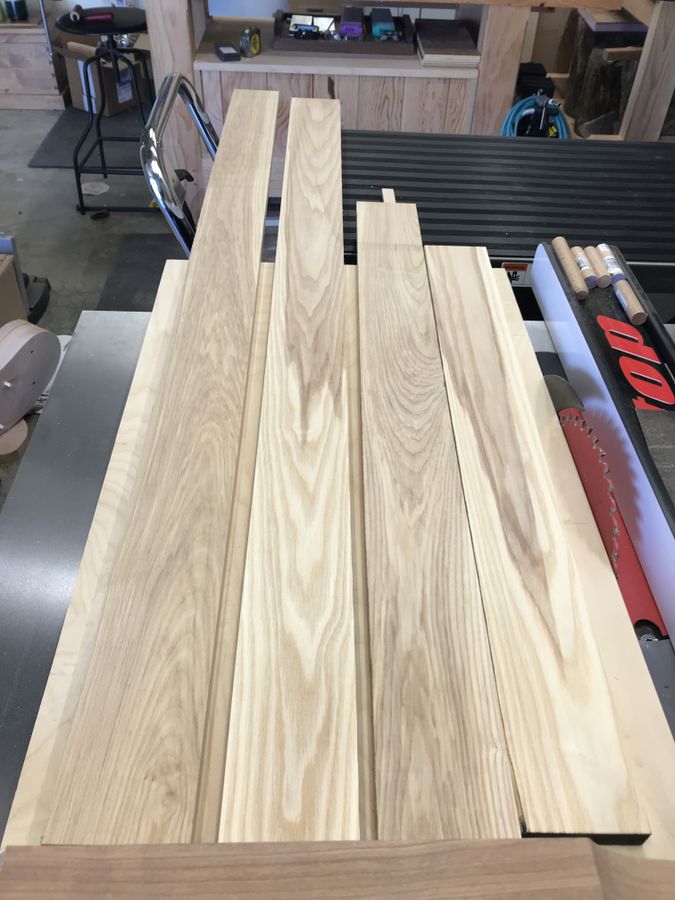 Fun Fact:  This was supposed to be a cherry frame, but when I resawed the material is bowed beyond all belief and I wasn't about to use inferior material. I've had this ash in the racks since I bought it on a discount sale from my hardwood dealer last year. It's about high time that I got around to using it. I had a nice selection of sap/heart wood to contend with, lets see what I  can do. 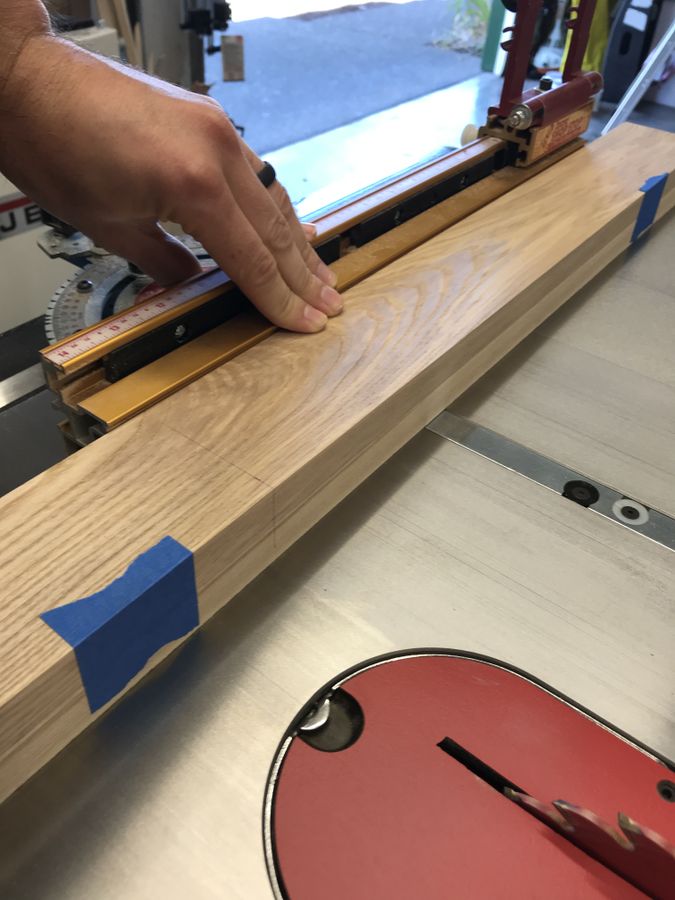 The height of the mirror exceeded the capacity of my miter gauge and crosscut sled for the use of a stop block, I decided the only other option was to cut everything at once. Blue tape keeps things together well enough for a few quick cuts. If it was anything more extensive I would have put a strip down the whole seam. 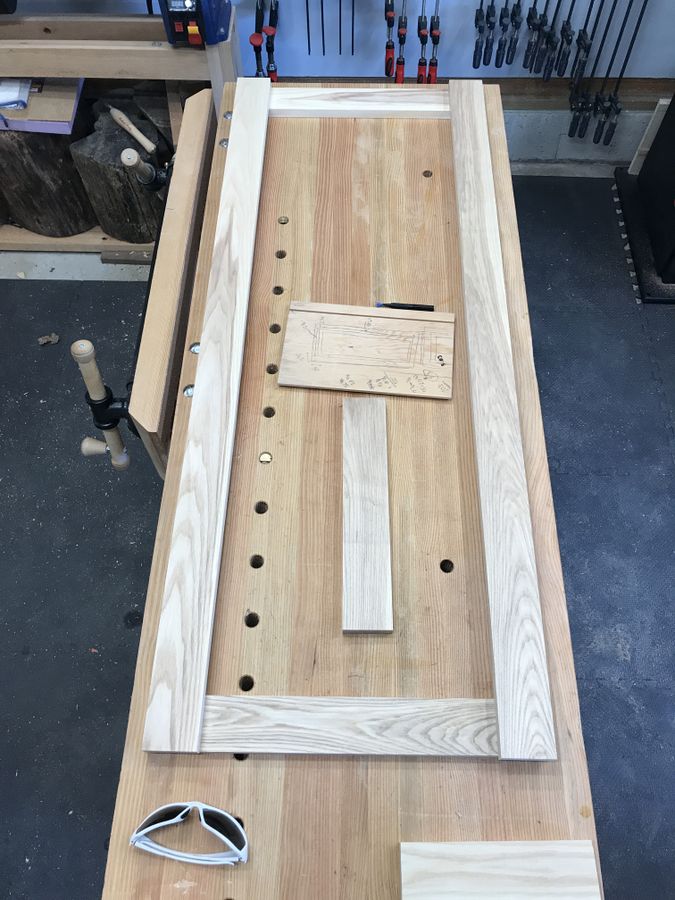 After I cut everything to length and width, I fiddled around with orientation. I couldn't escape the sapwood, so I embraced it and grouped the pieces as much as I could. I like the way it flows from the upper corner, I only with I could have performed a magic trick to mirror the board on the right. 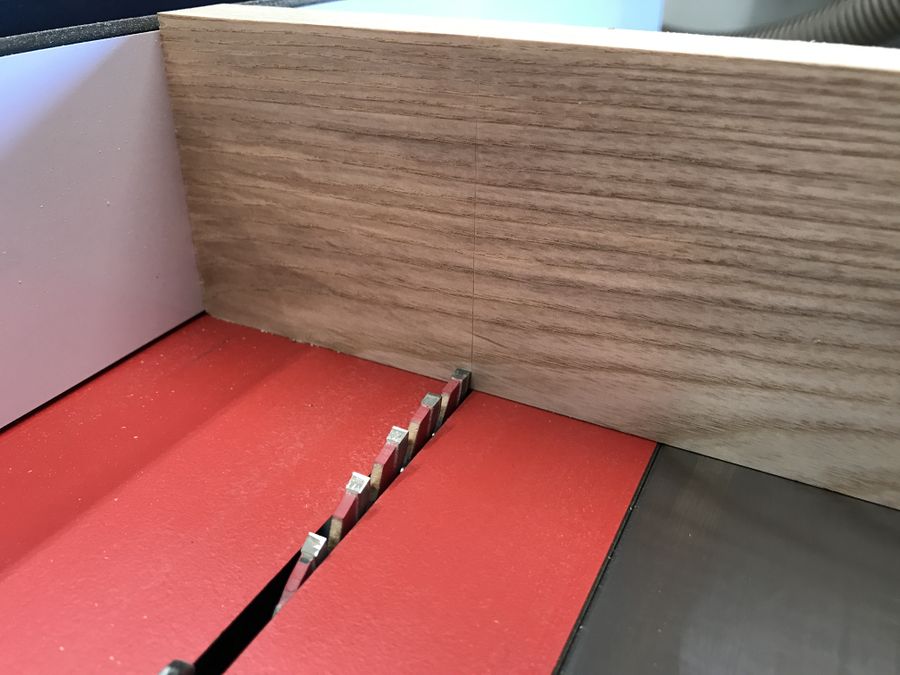 For the bridle joints I set my gauge to the width of the material plus 1/8". If you weren't keeping the joints proud, a 1/16" would be sufficient for cleanup post gluing. I use the scribe line to set the fence on my saw. 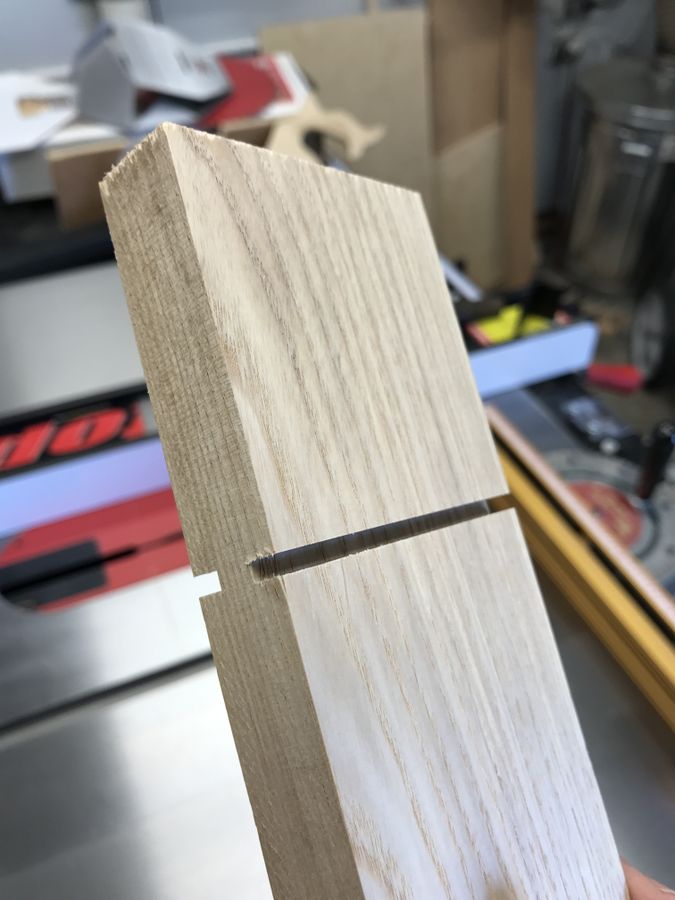 Cut the shoulders first, just like a tenon but skipping the ends. I don't like using a dado blade because it leaves score marks, so I had my old combination blade sharpened to a flat top and it leaves a nice surface. 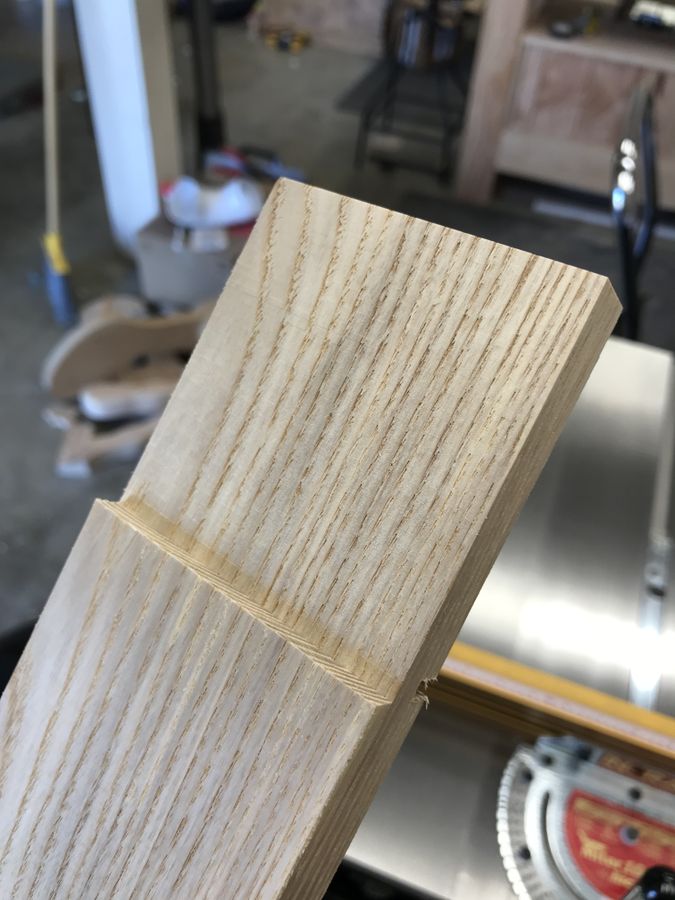 Right off the saw, no cleanup required. 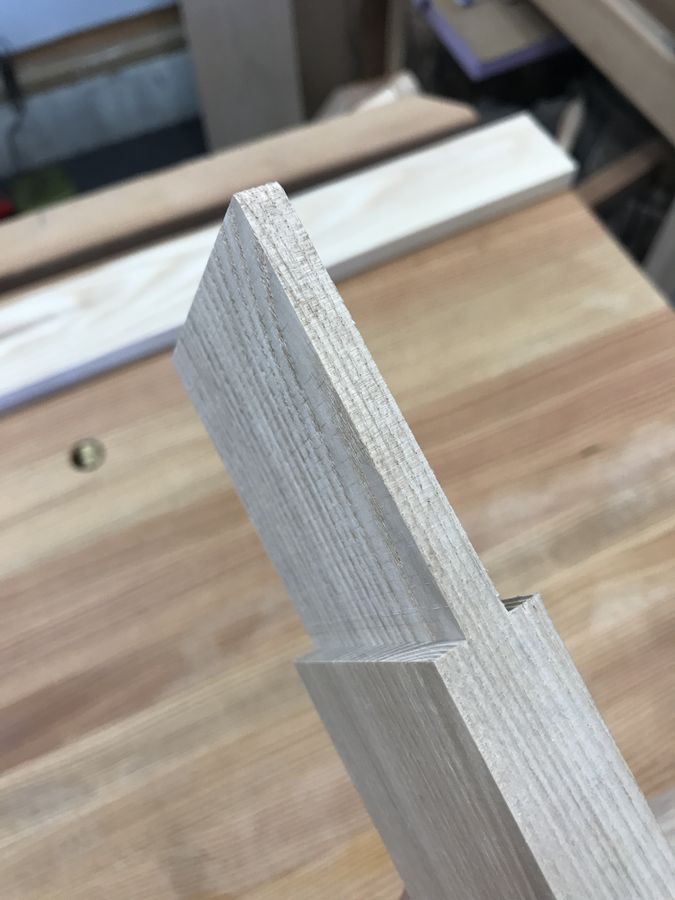 Tenons cut on all 4 corners, easiest part of the build. 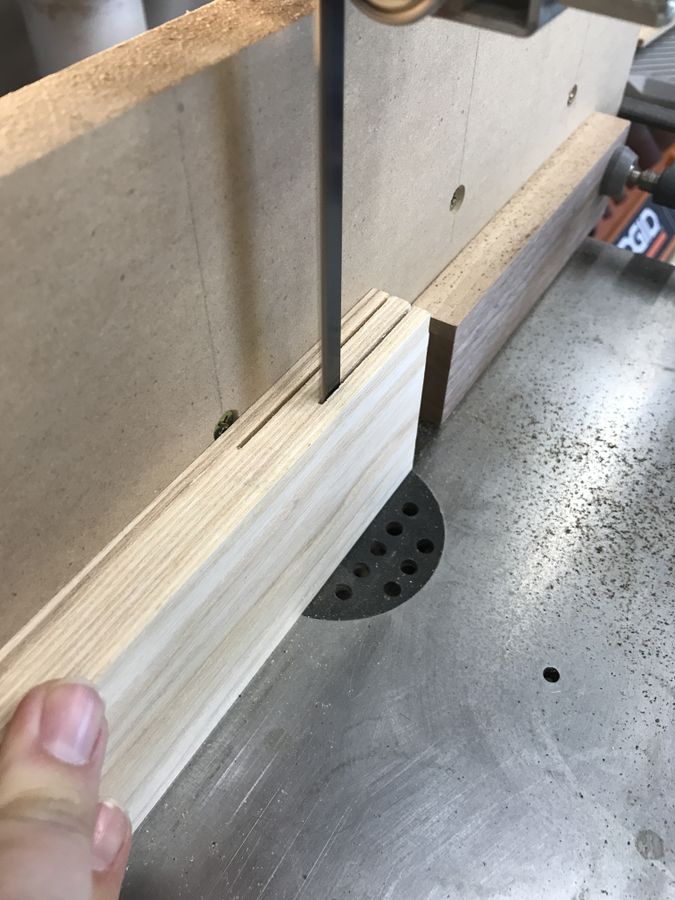 I would normally do this on the table saw with my tenoning jig, but I thought I'd give the bandsaw method a try. I should have used a shorter fence so I could get the guides closer to the cutting area to avoid extra movement of the blade. 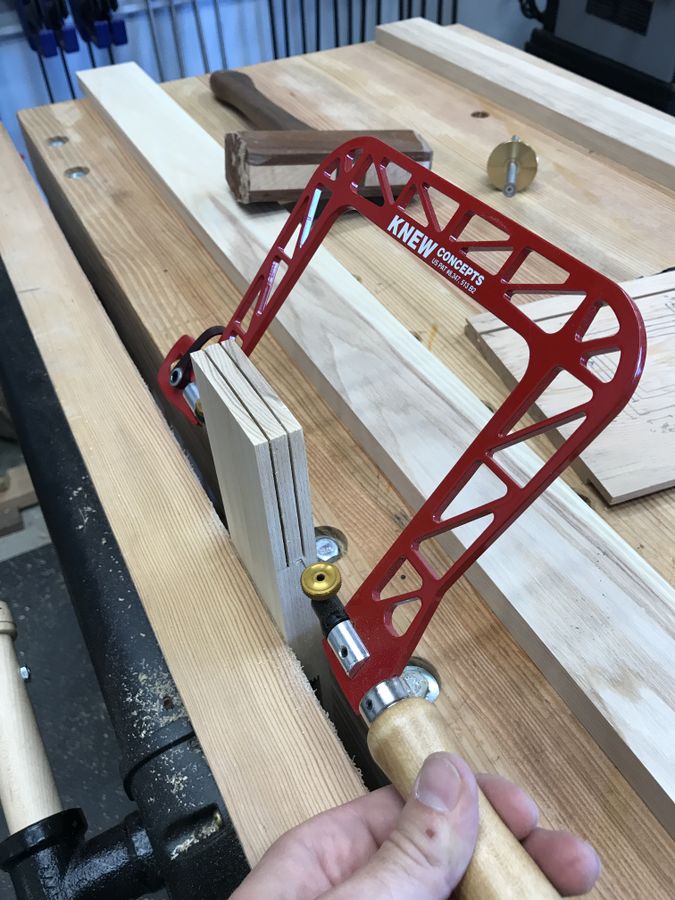 This seemed like a great way to remove the waste until I broke my third blade.... 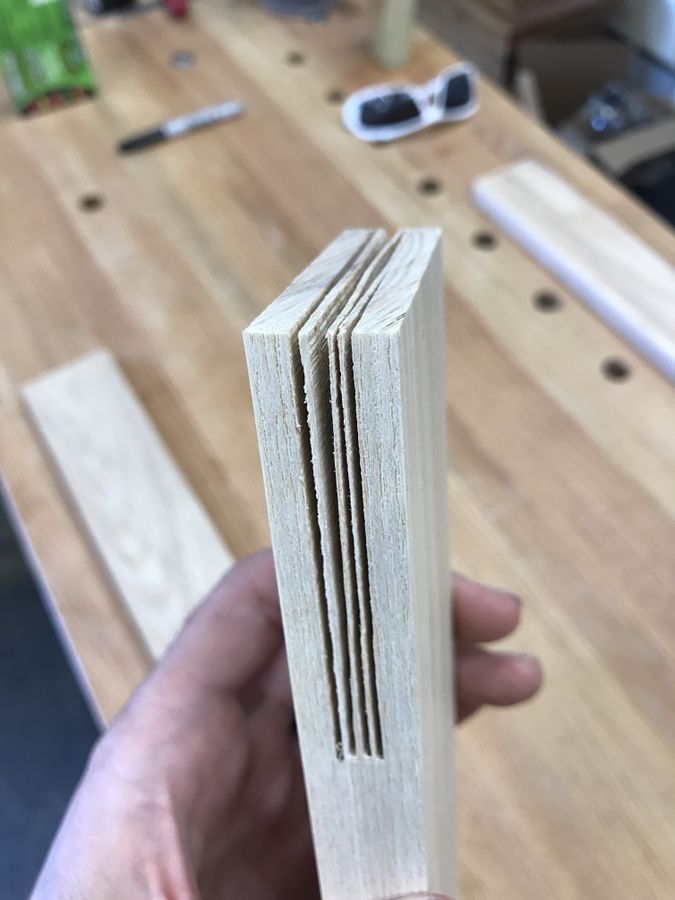 This was a good compromise. I still cleared things out with the fret saw, but this decreased the heat building up on the blade causing it to break so often. 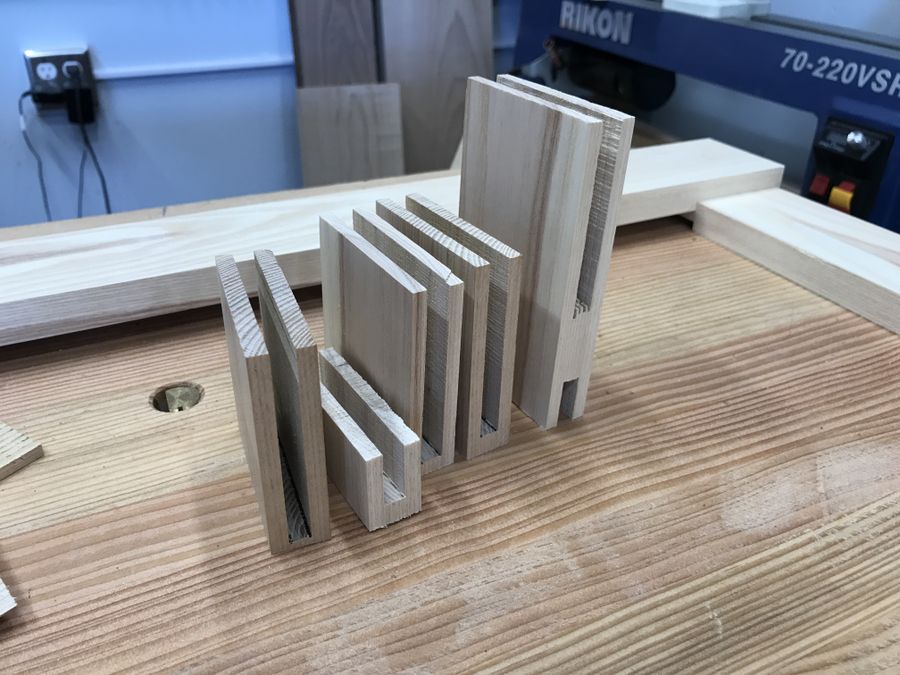 Many many practice joints later. 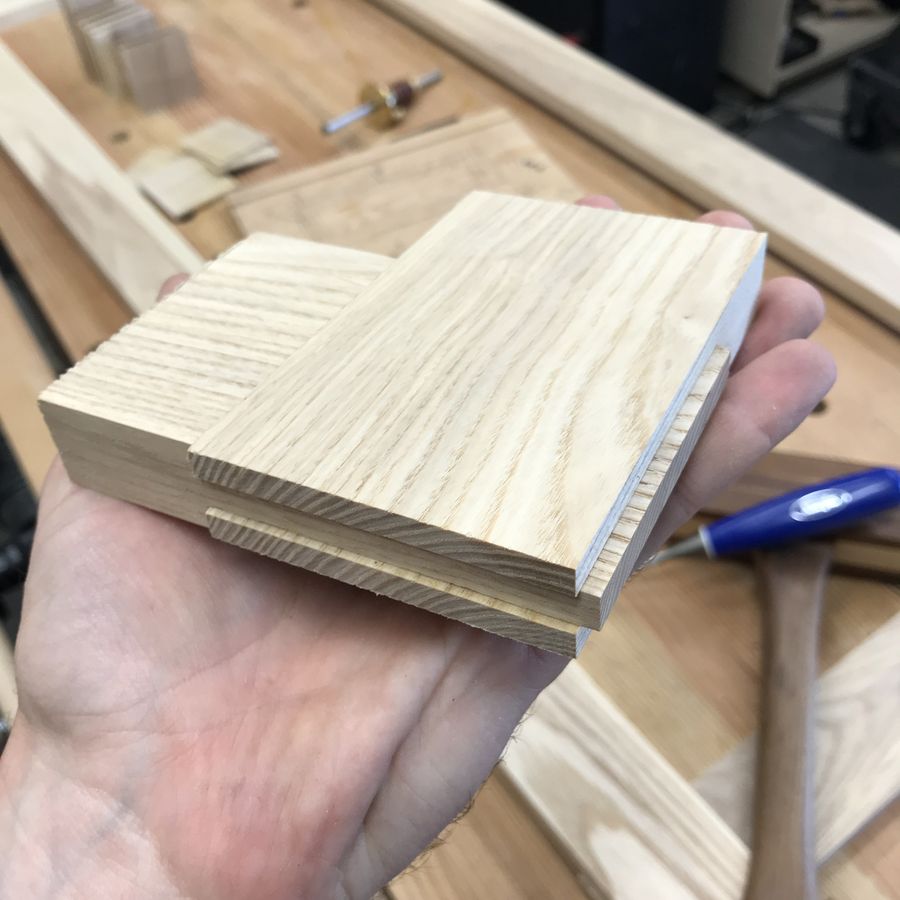 I got the fit dialed in really nicely. 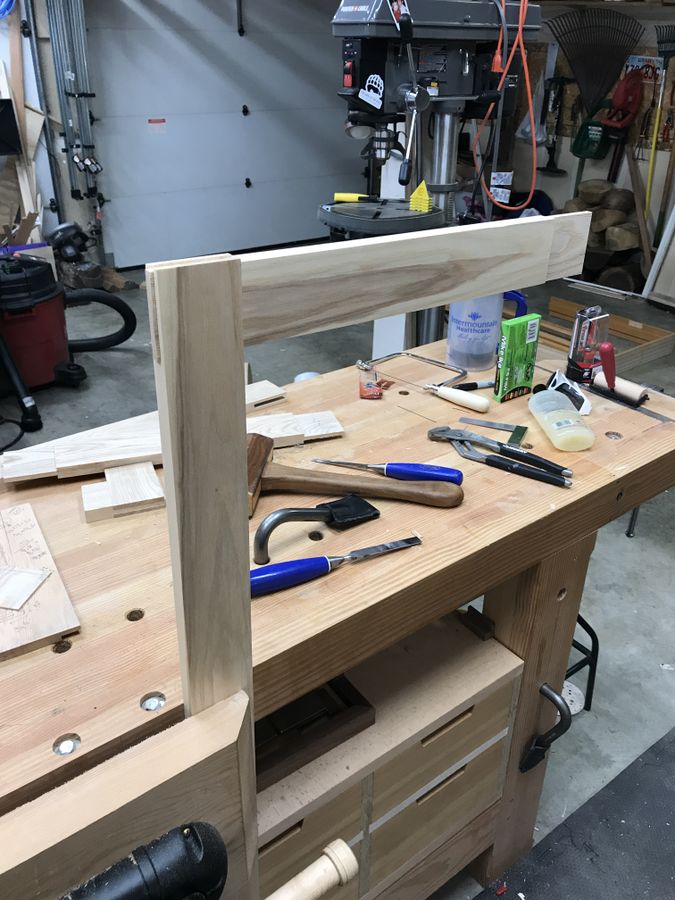 A well fitting joint. Goes together and comes apart without a mallet and holds its own weight. 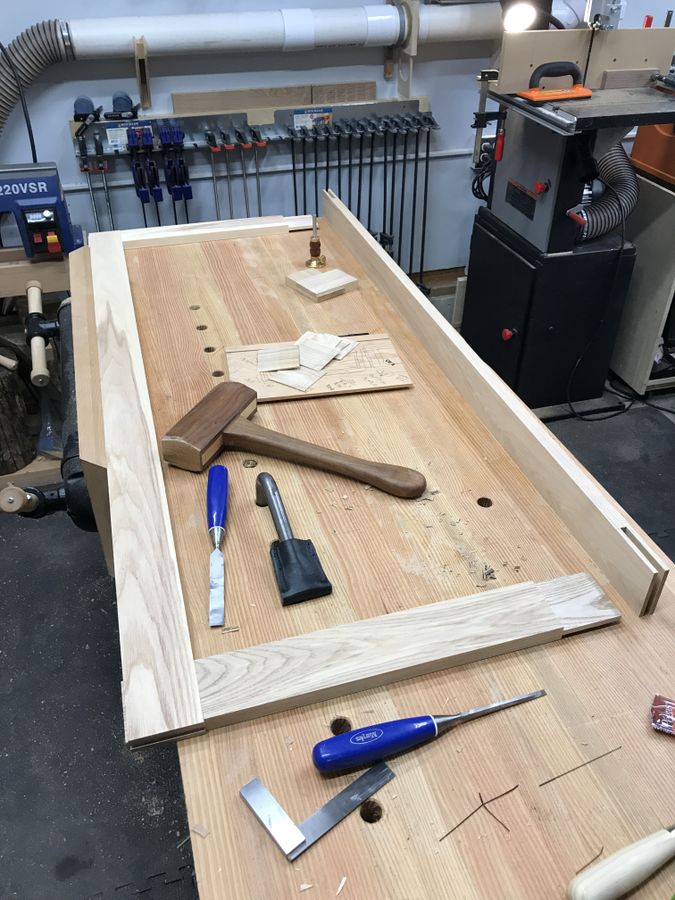 Each joint needed a bit of chisel work to clean up to the baseline, so I just took it one side at a time. 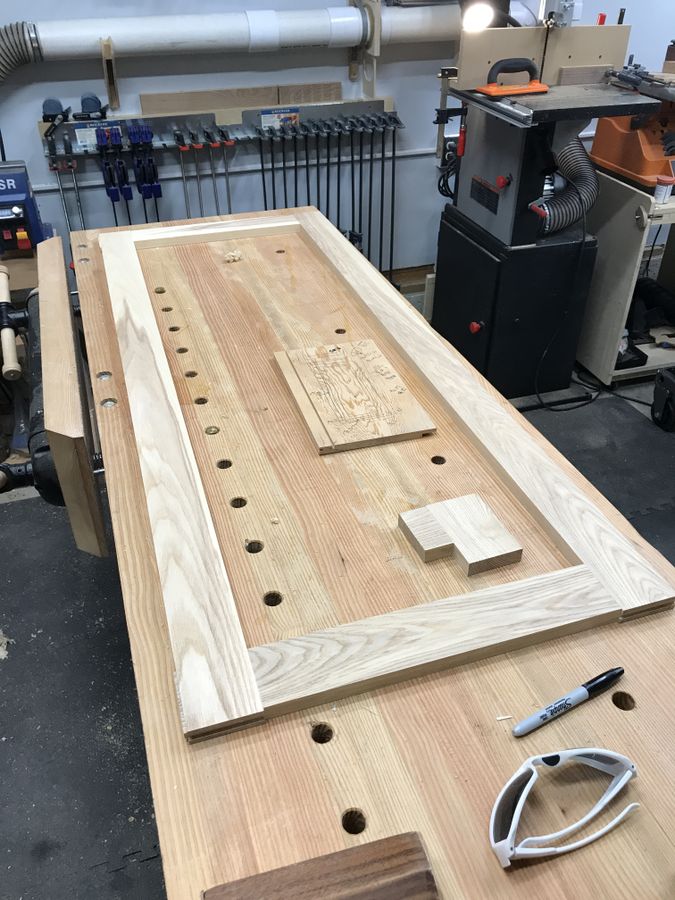 Not too bad right? 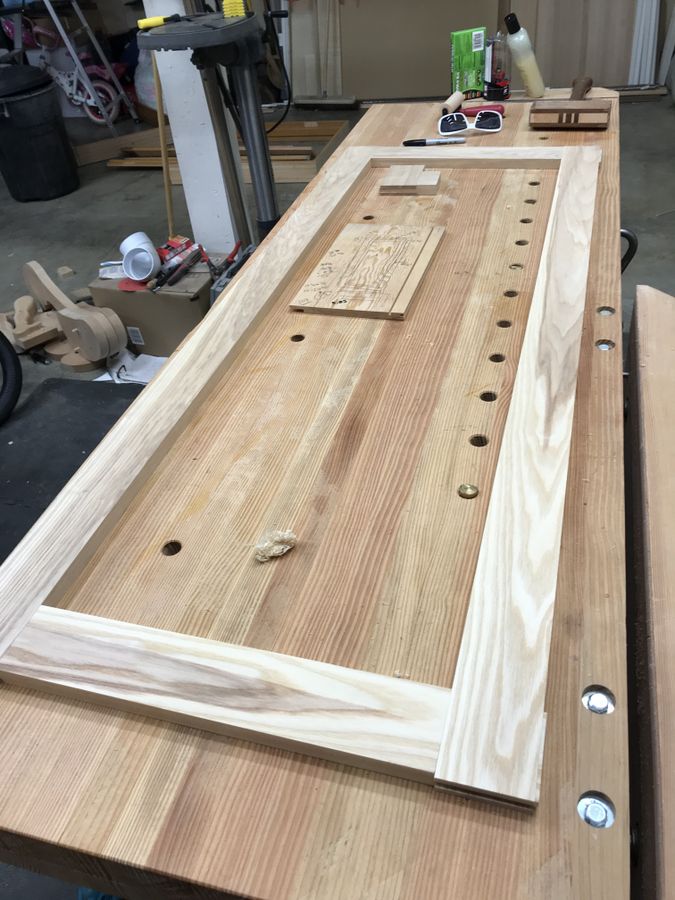 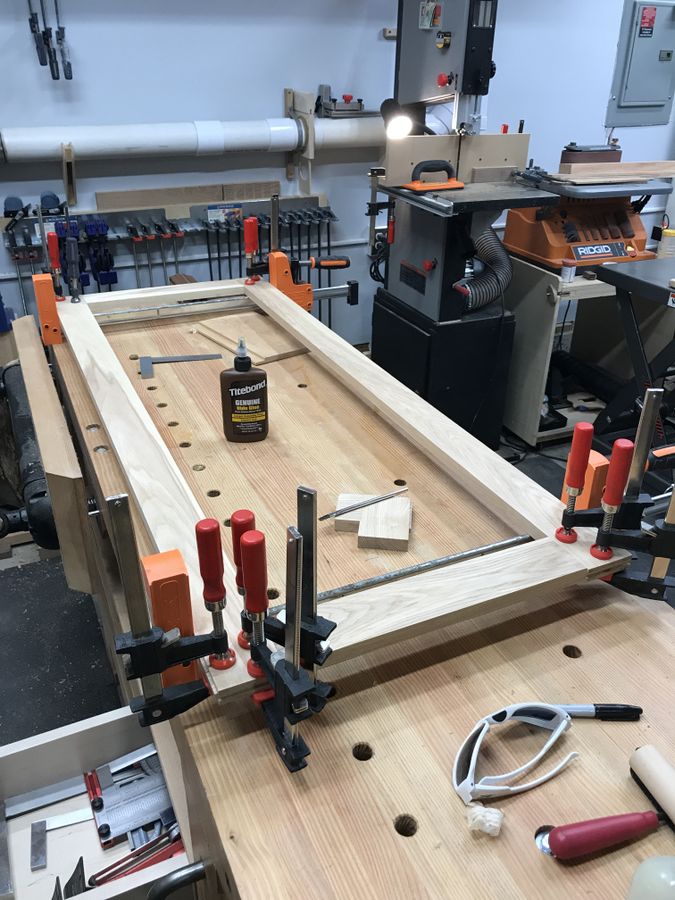 I did the best I could with a mallet to keep the ends seated. But next time I'll go buy some pipe. 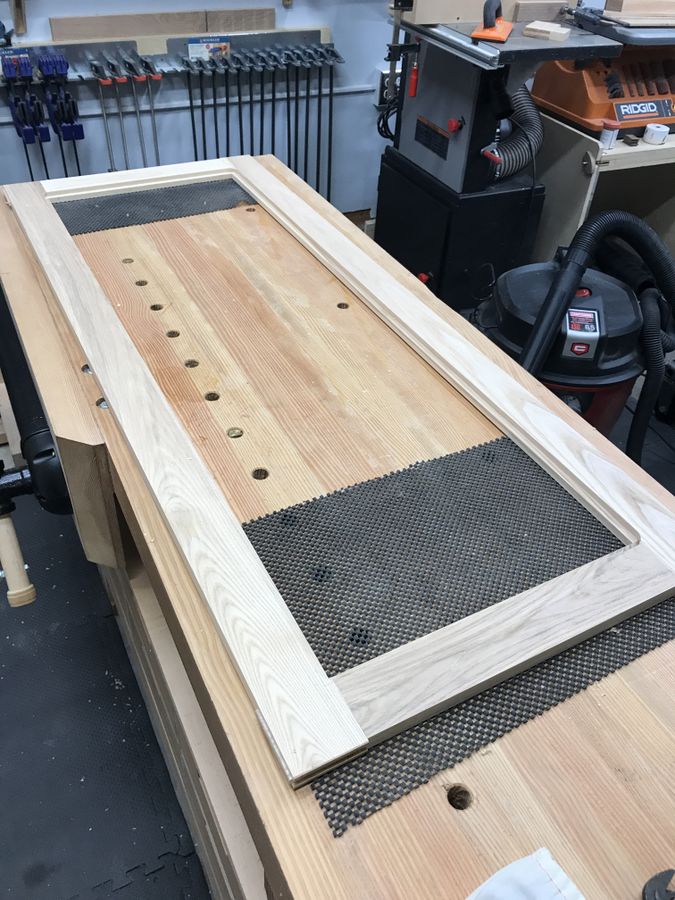 I generally cut the rabbets of my frames on the tablesaw before I glue them up, but that isn't possible on a frame that's not mitered like this one. I used a simple rabbeting bit from Freud and it did a great job. 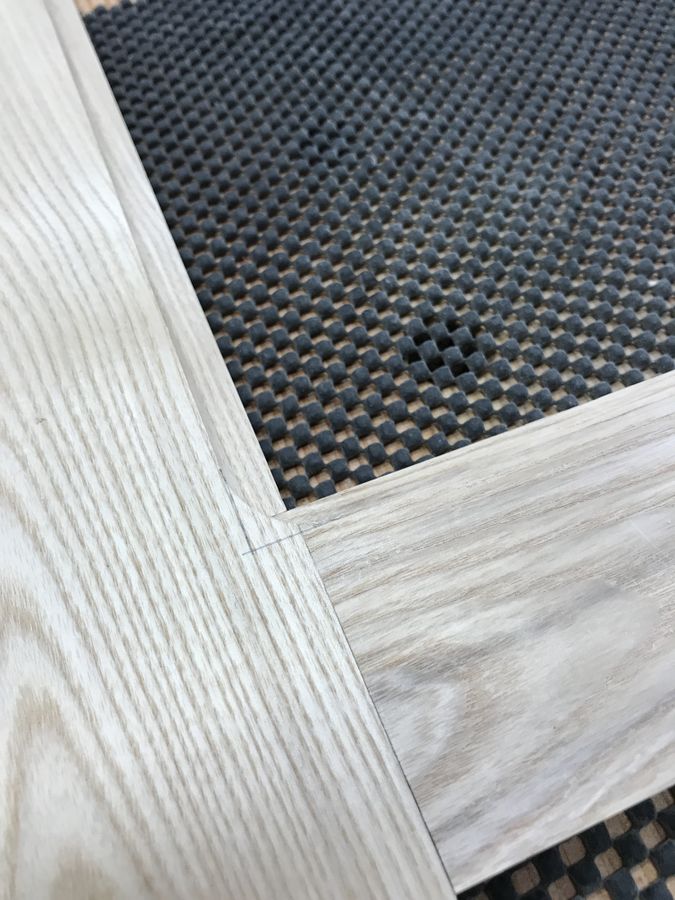 Rounded corners were the only cleanup that was needed. 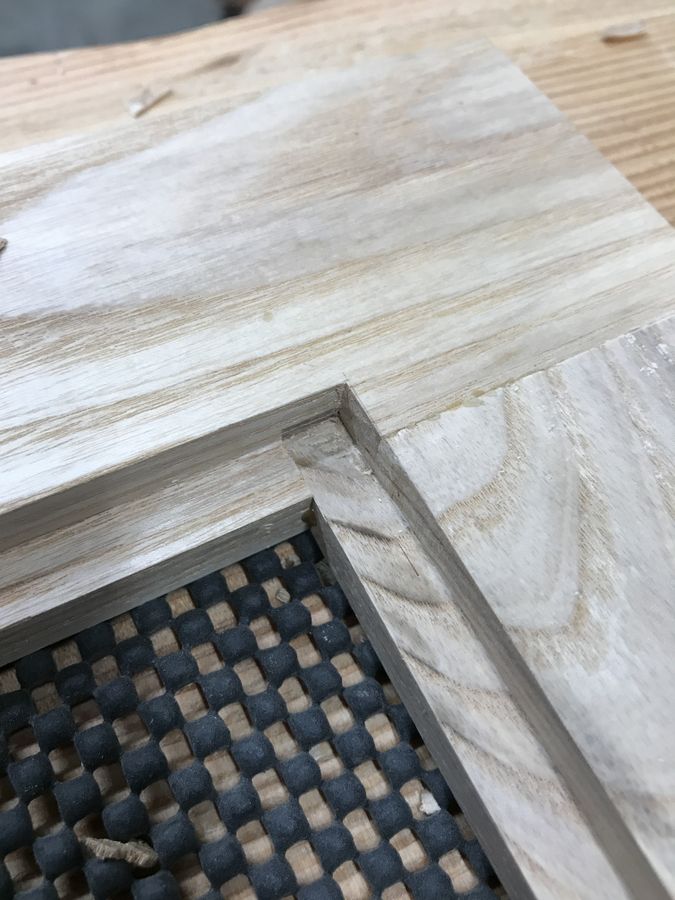 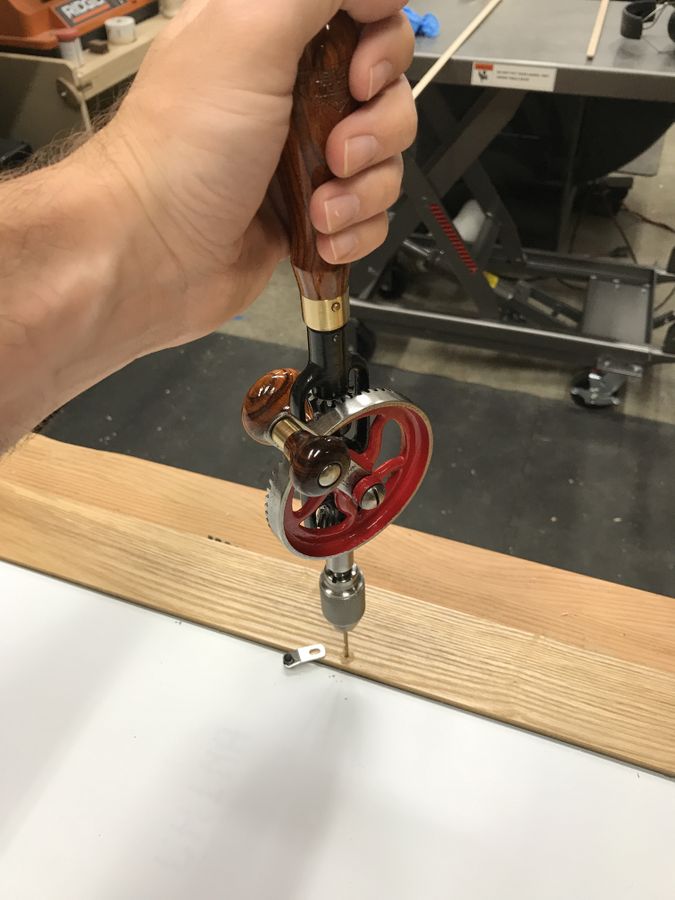 I used whatever hardware I had left over to keep the mirror in. I used 4 of these bumper holders, probably need two more, but whatever, this works.

I love to use my eggbeater drill for stuff like this. Quiet and controlled. 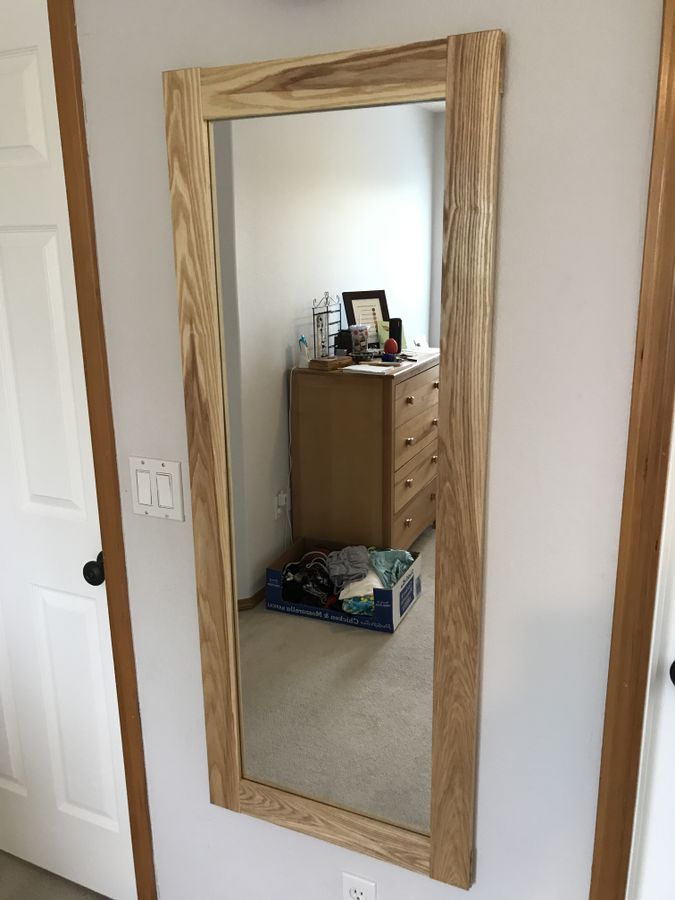 Excuse the messy dresser and box of maternity clothes our friends gave us. :) 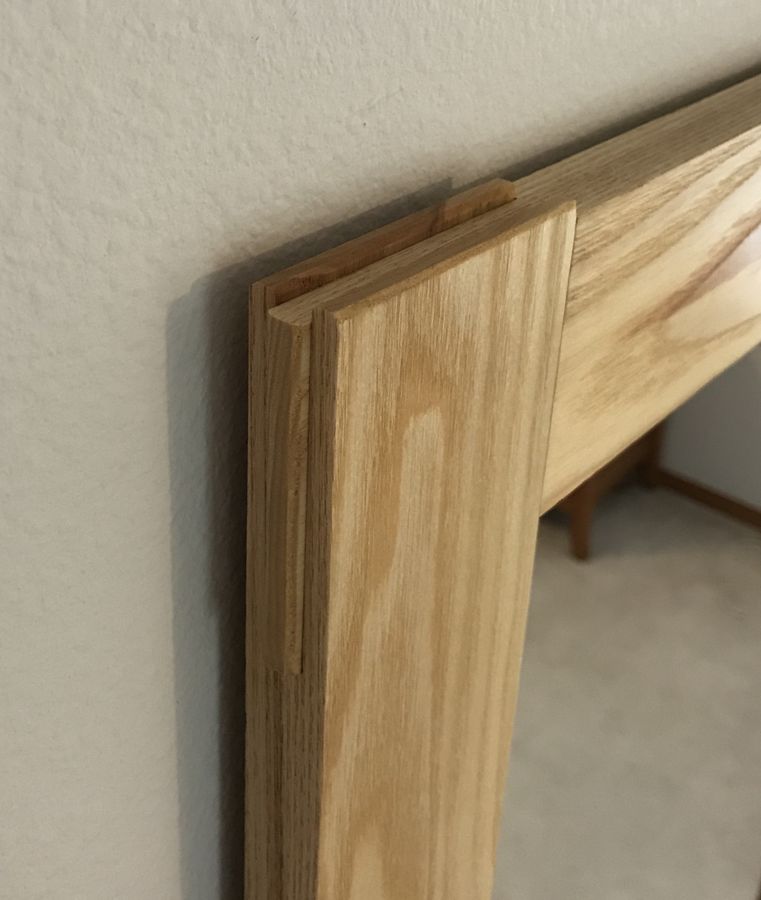 I initially intended to leave the bridle joints square, but after glue up decided to put a little chamfer on them. Next time I'll do this before the glue up. 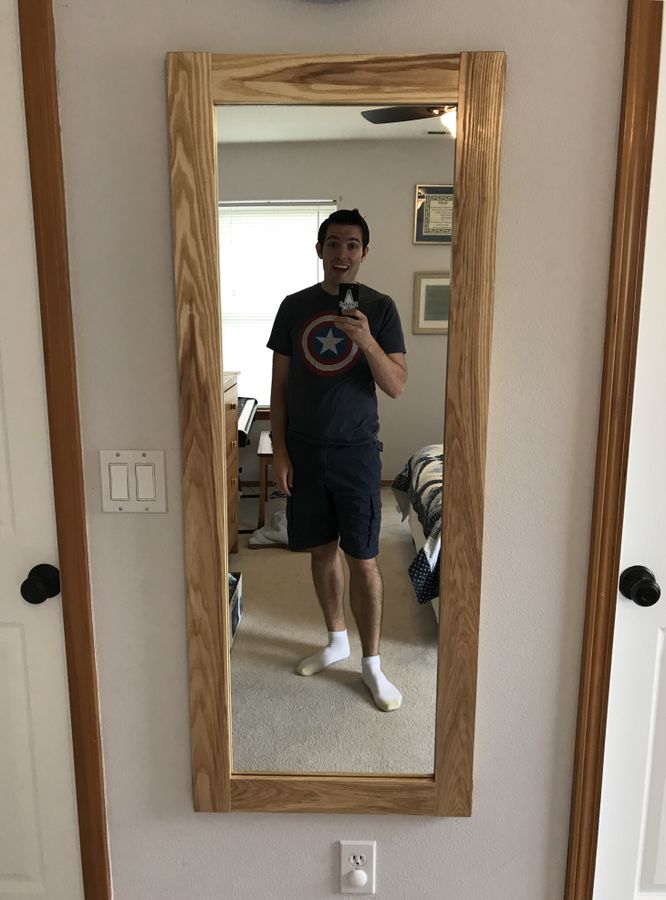 Who's that sexy guy in there?!