This is my Holtzapffel workbench I built for the workshop competition. Though the competition did not require it, I built this bench start-to-finish within the window. I started August 8, and finished installing the vise Sept 23. I based it off Chris Schwarz's plans and chapter in his second workbench book, though I changed some dimensions slightly. It is 7 feet long, about 32" tall to fit my 5' 7" stature, and 23" wide and  It is built out of Douglas fir. It is constructed with draw bored mortise and tenon joinery. This was my first time building with mortise and tenons as well as chopping mortises by hand. It also marked a time where I did quite a bit of updates to my shop, so you will notice lots of mess in my shop during this build not only from the build itself, but from painting my garage, building a lumber rack, moving things around, and getting rid of some clutter during the build.  It is replacing my rickety workbench I built when I first started. I'm already amazed at how well this bench works. It's a night-and-day difference compared to my old bench. I'm greatly looking forward to building more projects on a bench that is heavy, stiff, and allows for versatile workholding. More details to follow with each photo. If you want to see more photos, I do have an instagram account where I share much more gratuitous amounts of photos of my projects @PoitrasWW. Thank you for visiting my build!

Finished photo first. Here is the finished bench, including my vise and chop installed. The bench was finished with two coats of danish oil and a coat of wax. I decided to try the "Schwarz approach" of no tail vise. So far, I have found it very functional. I made bench dogs, and below the bench are a planing batten and a couple doe's feet. I also purchased the Gramercy hold fasts and they are incredible. I don't know how I ever lived without them. 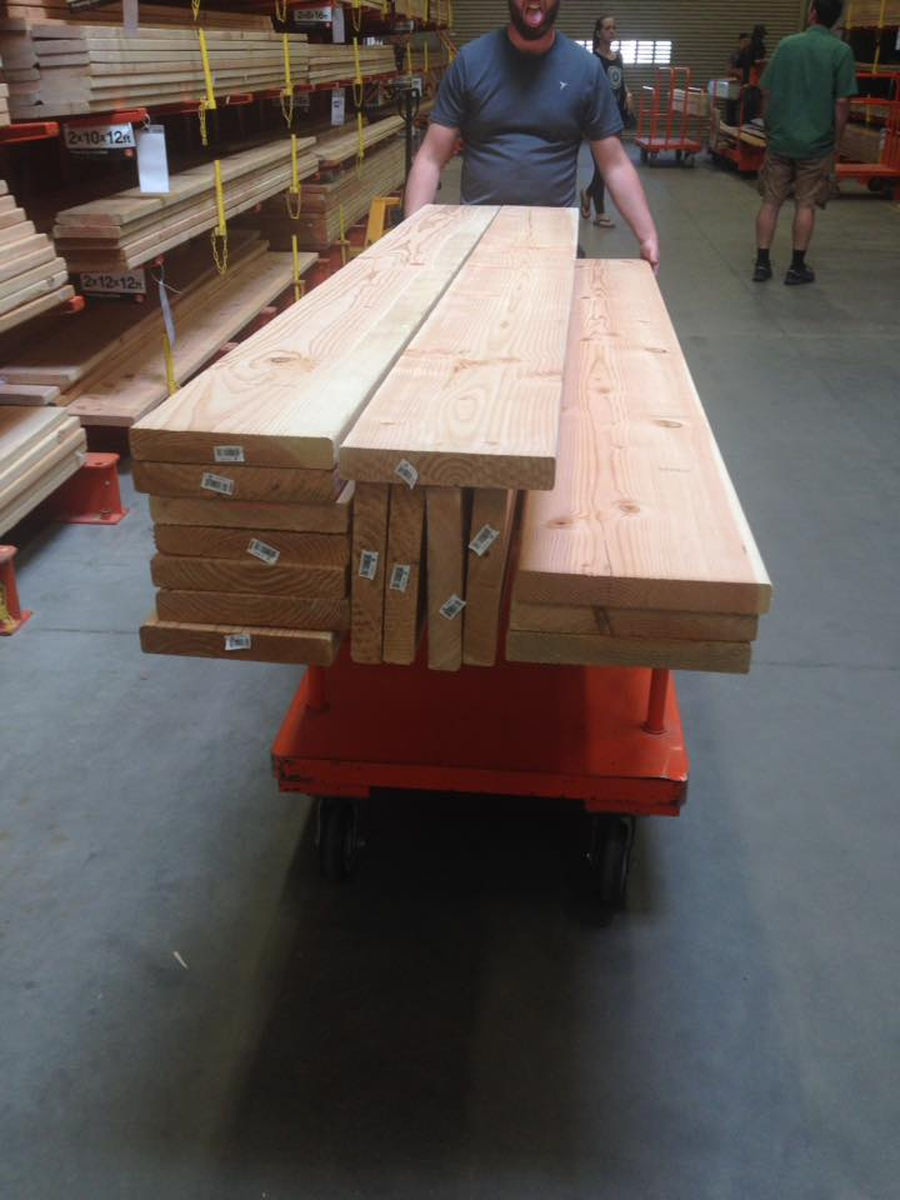 As with every project, this project began with lumber selection. I chose Douglas Fir because I was on a budget for this project. We picked through a TON of boards to get boards that were relatively straight with as few knots as possible. I had to settle for a few boards that were less than ideal, but we still made it work. We bought a couple extra boards, seeing as my nearest blue/orange stores are an hour away from me.

This was the end of a very long morning/afternoon. My tablesaw's riving knife assembly broke, and I ended up driving to the hardware store, buying a bolt, and flattening down the sides of it to fit the assembly. Once that work was done, it was a huge pile of ripcuts! Here are all the top boards laid out. 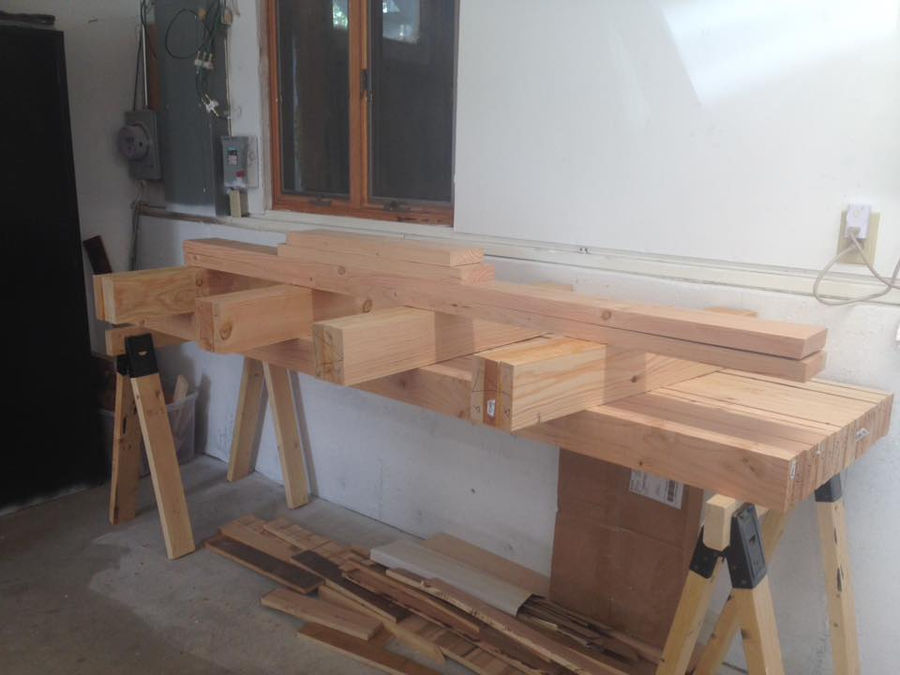 Lots of laminations happened this day. Here are all the parts rough cut, with legs laminated.

Cleaning up the legs to prepare them for final cross-cutting and joinery!

I built these legs a little larger than the original plans, which meant that I could not cut all the way through them with my poor Craftsman miter saw. 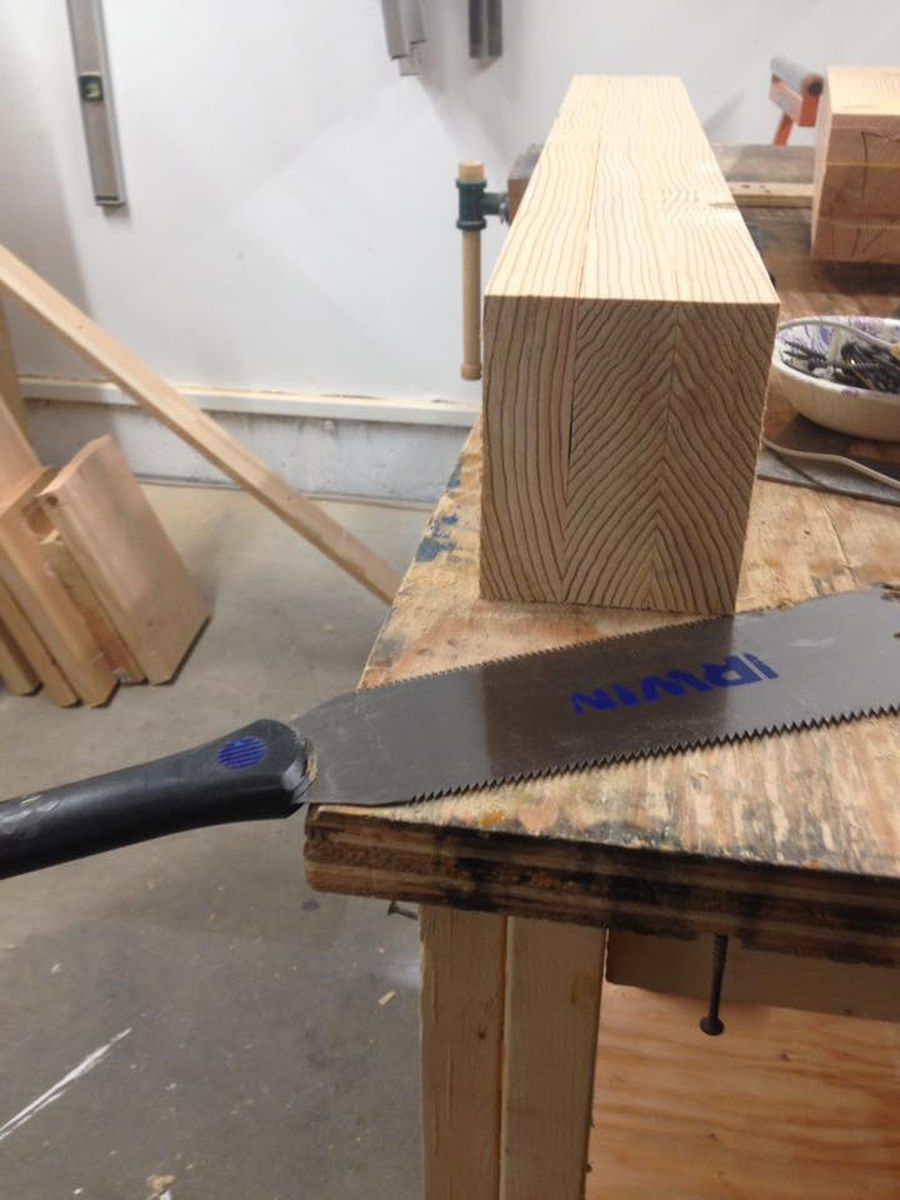 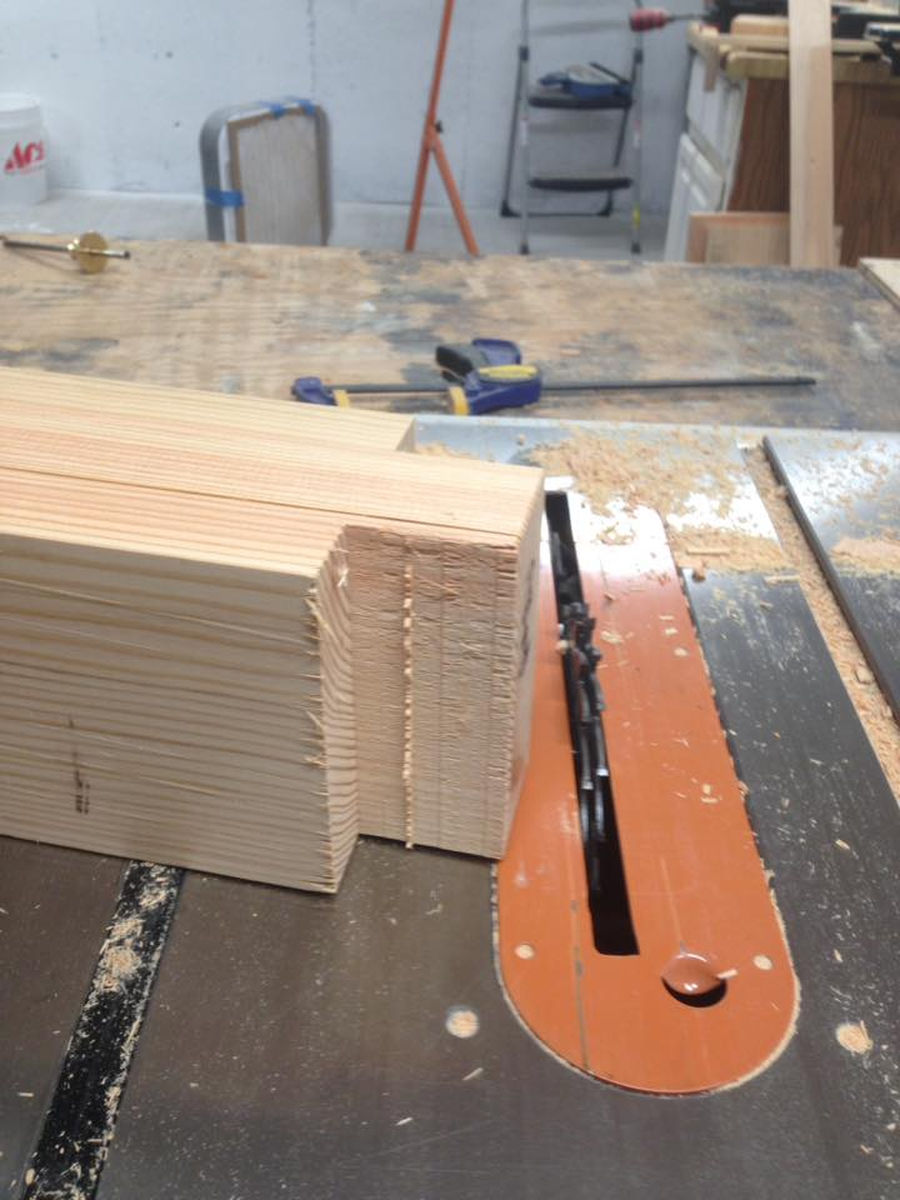 This project was my first time cutting mortise and tenons. I learned a lot in this project about the importance of keeping consistent downward pressure when using the dado stack. I had a LOT of irregularities in my tenons that made for more work later.

Here are the stretchers preparing to have their tenons cleaned up.

Skip what seemed like a hundred hours of hand-mortising and here we have glued-up and draw bored base! (Note the bench top of the bench on sawhorses in the background, already being used as a workbench.) 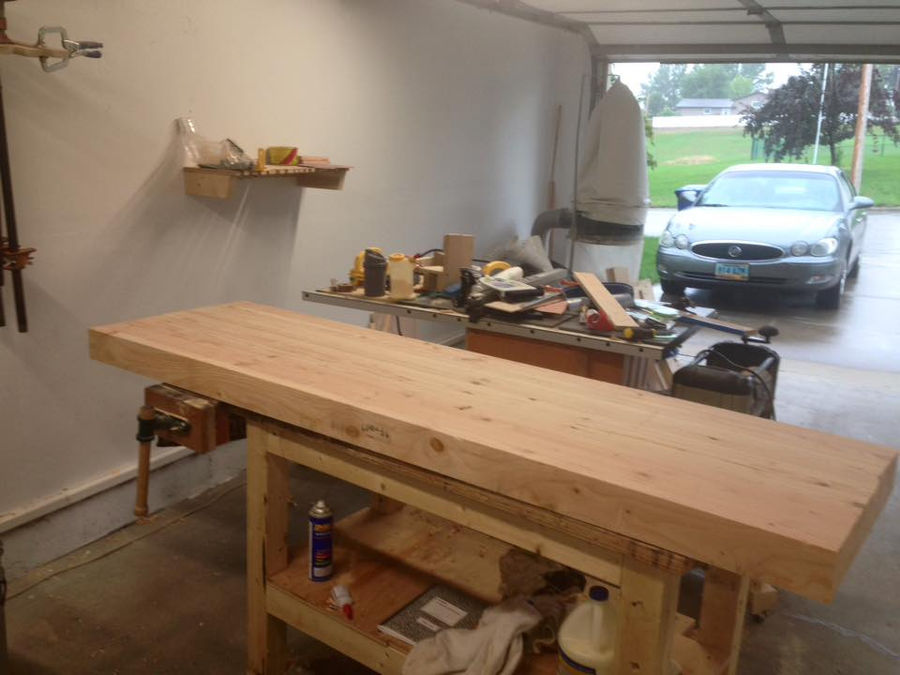 Here I was flattening the top. It is sitting on my poor workbench that was the first bench I ever built. It is wobbly, covered in glue, stain, and paint, and in need of some TLC. I stole the vise off of it for my new workbench, and I plan to modify and clean it up and it will serve as an outfeed/assembly/stackparts on/miscellaneous/sharpening table. 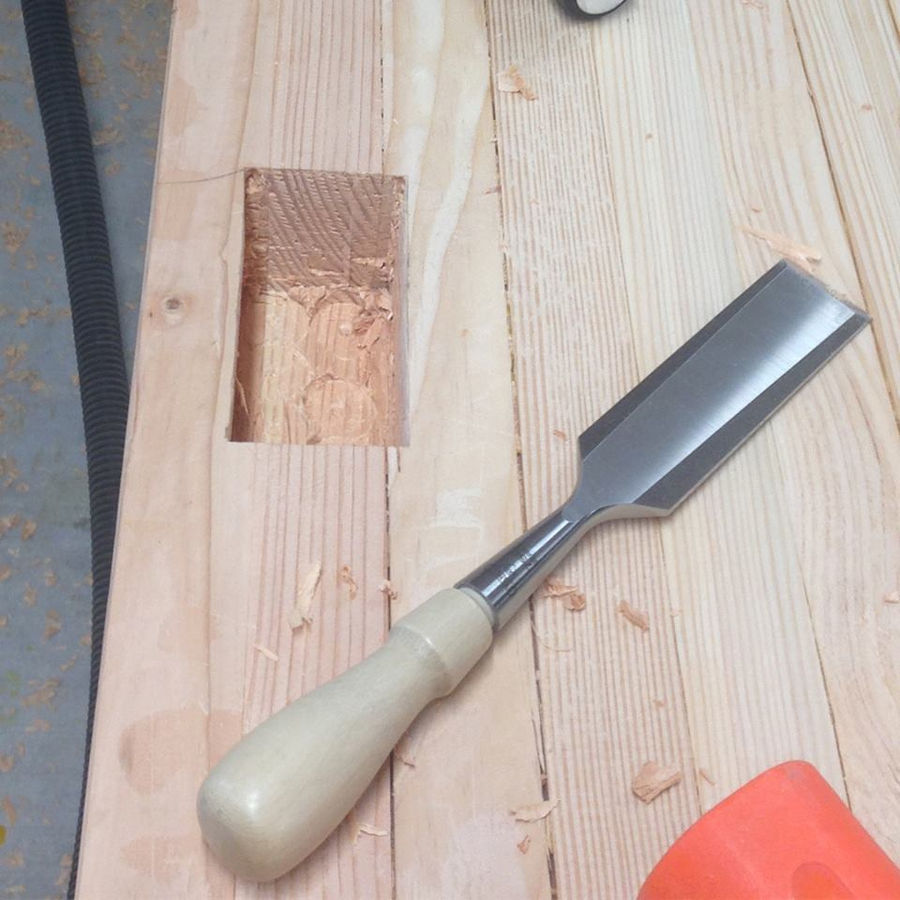 I started the mortises in the top with a drill and Forstner bits. Here I am cleaning up one of them with chisels. 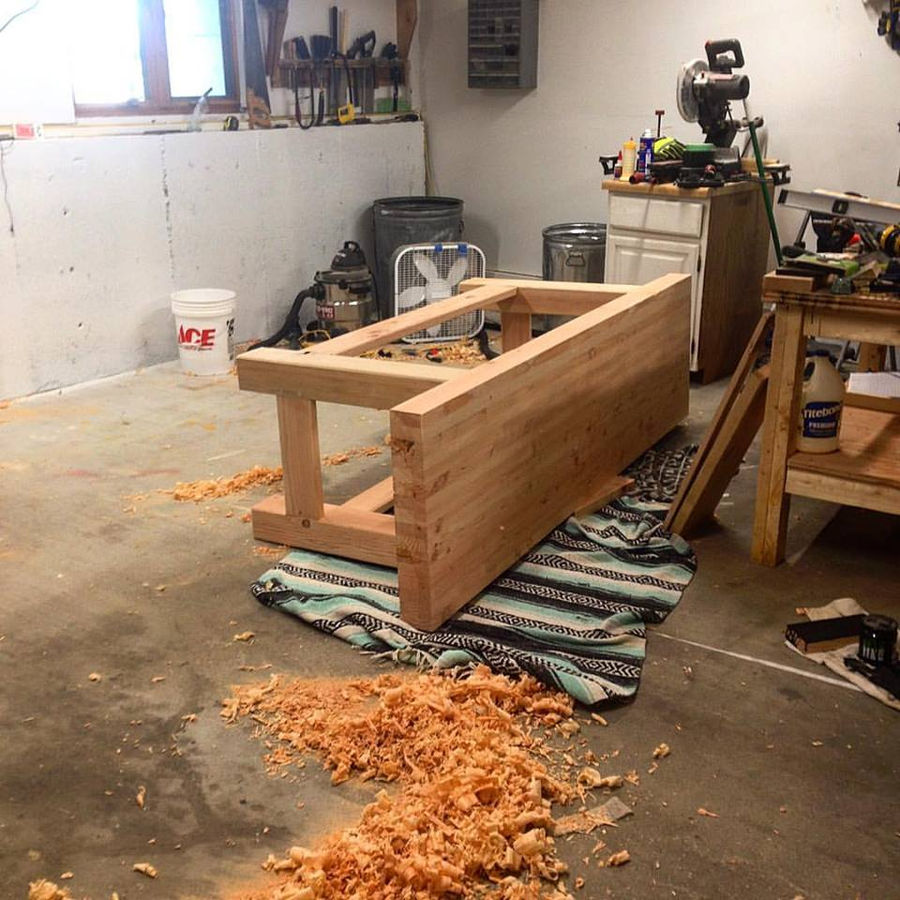 Here is the bench, all assembled, getting its final smoothing/top flattening. The top and base were also joined with draw bored mortise and tenons.

Close up of the chop detail.

Here you can see some of the appliances underneath my bench. That clamp poking its head out is clamped to my bench hook that I used to cut my bench dogs. Thank you for viewing my build album!